Can an Artist-Run Super PAC Be More Than a Gimmick?

Isaac Kaplan
Jun 9, 2016 3:18pm
The names of most super PACs sound like they were free-associated by a vaguely patriotic toddler (Rebuilding America Now, American Bridge 21st Century, and Priorities USA Action come to mind). Contributing unlimited sums of money to these campaign-supporting organizations was legalized in 2010 by the infamous “Citizens United” Supreme Court ruling. Today, political action committees spend millions of dollars on advertisements that are as mind-numbing as they are partisan. But For Freedoms, a new super PAC, is looking to chart a different path. You won’t find their headquarters on the D.C. beltway and they aren’t staffed by dozens of seasoned political operatives. In fact, when I visited their offices in Chelsea, the space was mostly filled with art handlers. 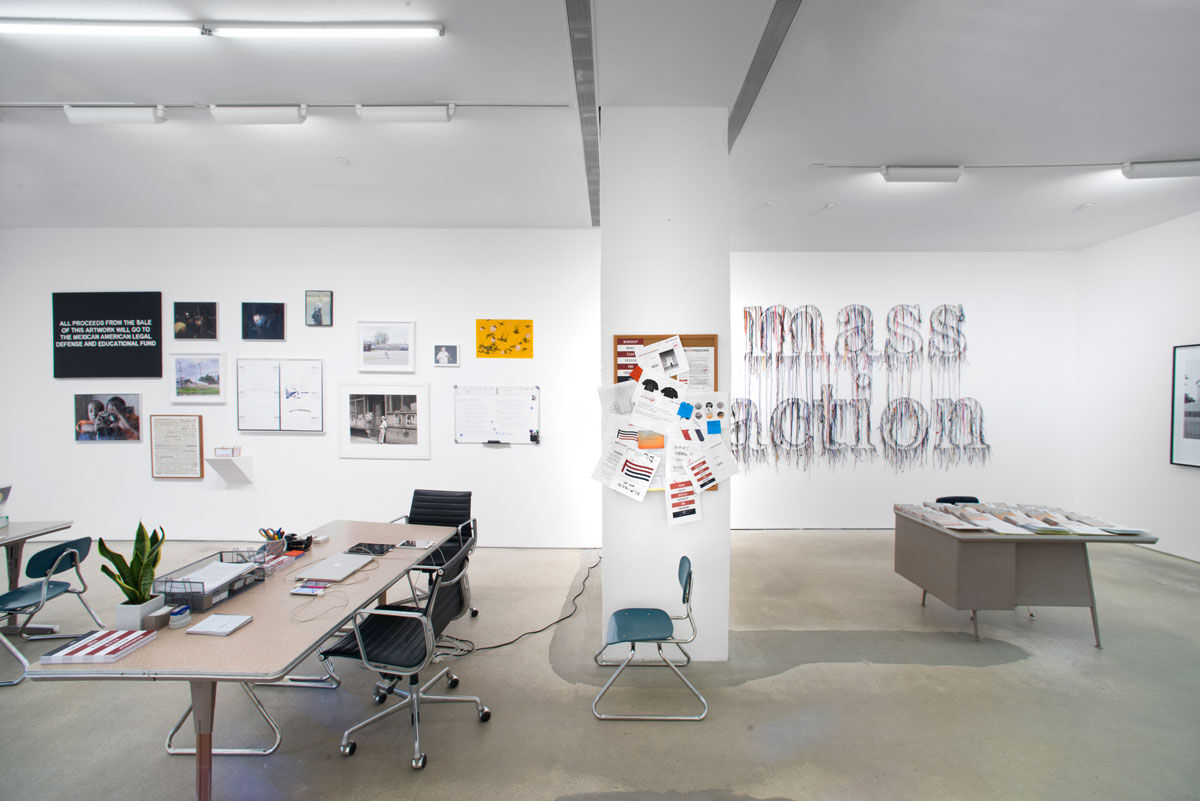 Installation view of “For Freedoms” at Jack Shainman Gallery, New York. Photo courtesy of For Freedoms.

Operating out of Jack Shainman’s 24th Street gallery, For Freedoms is the first-ever artist-run super PAC.  It is the brainchild of co-founders
Hank Willis Thomas
and Eric Gottesman, who are looking to make the political process their artistic medium. In their framework, collectors become donors, federal election commission regulations become artistic constraints, and all procedural aspects are open to interrogation. “This is the super PAC examining itself,” said Shainman. But did the gallerist ever expect his white-walled Chelsea space would become the HQ of a political action committee? “No, not really,” he said through a smile.
Working with artists including
Carrie Mae Weems
and
Zoë Buckman
to produce politically minded and mass-distributed campaign material, For Freedoms hopes to spark a nuanced conversation about this country’s politics, one that can exist beyond the traditional partisan divide. “We’re not bold enough to say that we know what’s best for our country all the time,” Thomas told me, “but we do feel like elevated discourse is fundamentally important.” The marriage of a utilitarian political tool such as a PAC and a work of art may, at first, seem unorthodox. But aside from the reality that all art is political, “Citizens United” effectively gave cash donations the same free speech protections enjoyed by works of art.
Getting people to rise above partisanship is difficult, even more so today given that we’re in the midst of one of the most divisive election cycles in recent history. Many, including President Obama early in his presidency, have tried and failed to create a discourse that can transcend entrenched political binaries. But art, with an “appreciation for, and a comfort with, ambiguity,” as Gottesman told me, may prove a better delivery method for that message than the dogmatic bully pulpit.
It’s hard to judge the success of For Freedoms given the PAC hasn’t rolled out any advertising campaigns yet (but stay tuned—they’re coming before the election). When they do materialize, don’t expect anything tied to a singular candidate or political party. “It’s not like we’re just talking about how bad Trump is or how much Hillary’s a liar or how great Bernie is; we’re talking about the system itself,” Thomas said. One campaign will see Buckman produce advertising based upon a line of eyeglasses and other fashion items—but made out of gynecological tools. “And that campaign might occur in the places that fashion is distributed—in magazines, on billboards,” said Gottesman. If this message sounds less than accessible, the medium, at least, will be more so.

Advertisement
While traditional super PACs produce commercials that approach pancake-level flatness, wrapping political campaigns up in subtle messaging risks it being dismissed by those who aren’t versed in, or don’t care about, the conceptual language of the art world (see: a large portion of the American public.) It’s a difficult balance to strike. Artists will decide how their work is distributed, but, as Gottesman told me, the goal isn’t to “produce the work up in New York and then send it out to the heartland to see how stupid we can make people feel. The idea is to figure out how artists’ intentions can reach people and touch people in really important and meaningful ways.”
So far, For Freedoms has raised just short of $100,000 in cash donations. On Tuesday, an exhibition of the same name (and featuring a stellar lineup of 46 artists including
Nari Ward
,
Alec Soth
, and Dread Scott) opened at the PAC’s headquarters. Gottesman expects that the resulting buzz will generate further donations as the line between collector and contributor begins to blur. The works on view have also been licensed to the PAC, in case they want to use images of them going forward.
When I visited the exhibition, it was still being installed, and the series of
Norman Rockwell
paintings, “Four Freedoms” (1943), that lent their name to the PAC were balanced against a wall. Depicting an American citizenry exactly as they exist in a Stephen Spielberg movie about World War II, Rockwell’s original prints (on loan from the Rockwell Museum) were juxtaposed with the stark yet layered messages of Kameelah Janan Rasheed’s text work. One example reads: “Purchase the proper boots with which to pull yourself up by your bootstraps.” The pairing constitutes a necessary corrective to Rockwell’s depictions of a tranquil, homogeneous America that was always more imagined than real. 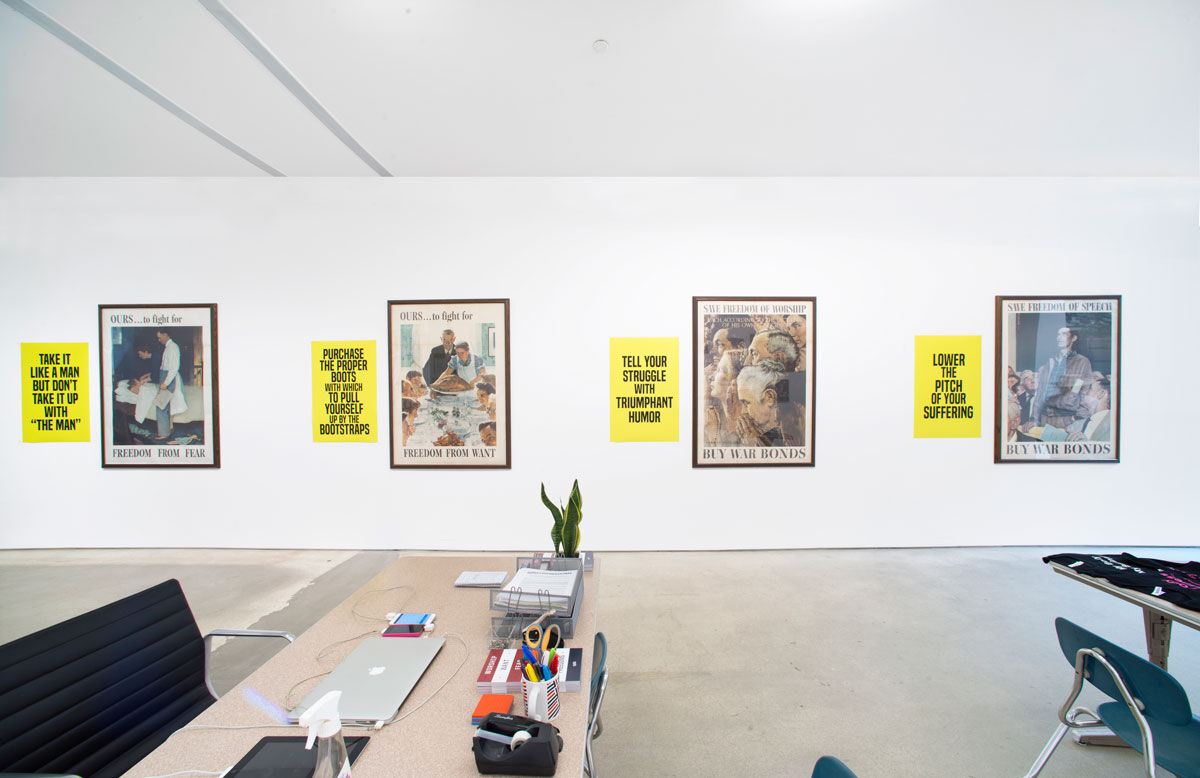 Installation view of “For Freedoms” at Jack Shainman Gallery, New York. Photo courtesy of For Freedoms.

Like the PAC itself, several of the works included in the exhibition blend conceptual, artistic strategies with more straightforward forms of activism. Take, for example, the People’s Kitchen Collective, members of which were setting up in the gallery’s back room. On opening night, they asked visitors to write down and share the remedies (from ginseng to aspirin) provided to them by their parents, touching on both individual heritage and shared connections. “We’re looking for remedies to everything from white supremacy to diarrhea,” coalition member Sita Kuratomi Bhaumik said, laughing. “Anything your parents might have taught you.” I wrote down the very boring “Tums” as a parentally prescribed cure for stomach pain. The collective can usually be found in its homebase of Oakland, hosting a free breakfast program inspired by the Black Panthers, who at one point in time, Bhaumik says, “actually fed more children than the U.S. Government.”
The gallery will also distribute real voter registration cards, though they come with some additional messaging from artist
Trevor Paglen
to make you question what it is you’re voting for. As I was leaving, Gottesman went to get me a form, paperclipped to which was Paglen’s contribution: a card that read “vote for war” in a style resembling
Ed Ruscha
. “Are Donald Trump’s kids going to come over to get one?” joked Shainman. (Two of the presumptive GOP nominee’s children forgot to register as Republicans in time for April’s New York primary.)
Political art is sometimes derided by critics who think its messaging too overt. This is a fair point in many cases, and imbuing a work with a direct political missive doesn’t place it above scrutiny. But the subtext of such criticism is often that the art is too tied up with the concerns of the real world. If we delve even deeper, the implication is that grounding a work in politics takes it out of the ethereal domain of “fine art” (this is like Zagat critiquing a fancy meal for being too affordable.) Impact is, seemingly, the most meaningful criterion for evaluating anything that occupies a political soap box. But judging For Freedoms entirely by its success or failure at the ballot box is something Gottesman and Thomas would likely take issue with, and for good reason.
This is an election that will see center-left pragmatism and right-wing bigotry—neither particularly appetizing, to this writer at least—squaring off in November. We have 151 more days until Election Day, the very thought of which makes me reach for my Tums. In the meantime, give me a work of art that compels me to thoughts more complex than a binary choice, that lets us see a world in which there are more than two ideas of freedom, and that settles the stomach by unsettling the mind.
Isaac Kaplan is an Associate Editor at Artsy.
Related Stories