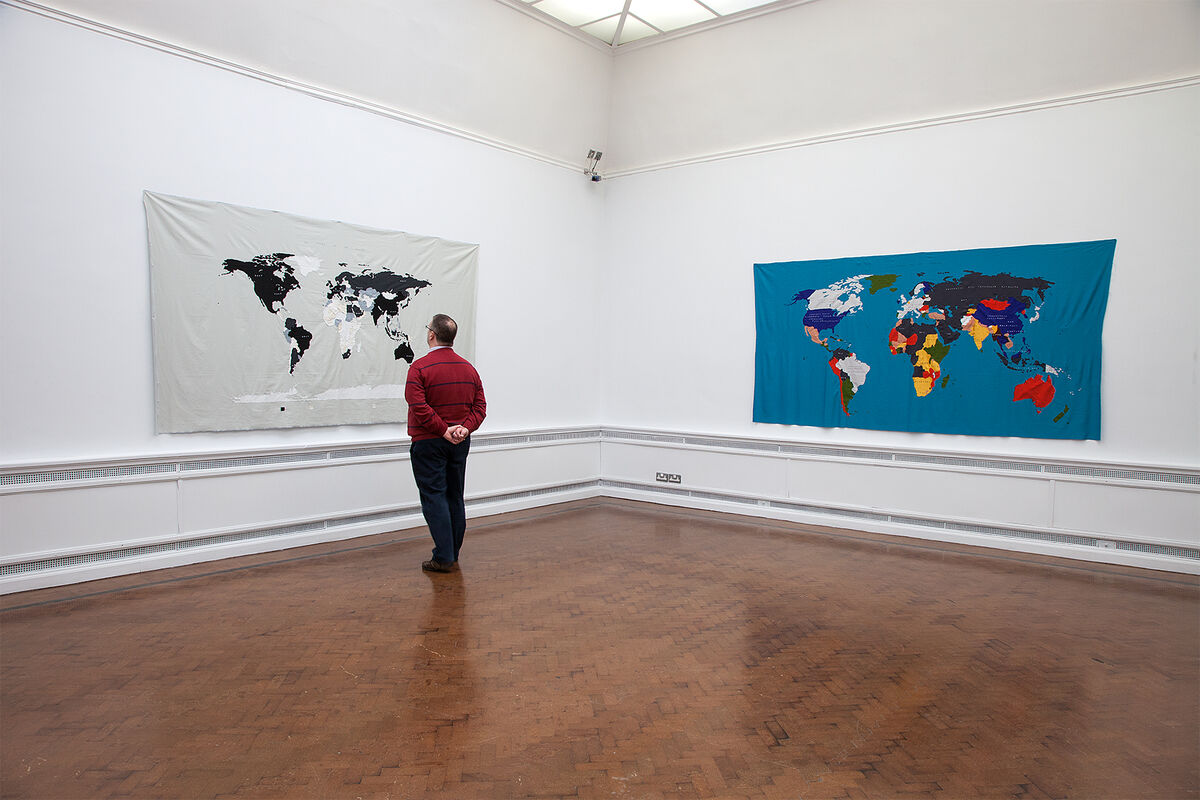 The latest edition of Ireland’s contemporary art biennial, EVA International—pointedly titled “Still (the) Barbarians”—takes as its central premise that Ireland is a postcolonial country. The statement by Cameroonian curator Koyo Kouoh that “the entire British colonial enterprise began here,” and thus that Ireland can be read as a “laboratory” for the conduct and consequences of imperialism, might at first seem uncontroversial. It will have escaped the notice of no one with an interest in Irish history or culture that this year marks the centenary of the Easter Rising, the Irish rebellion against British rule that paved the way for independence. Nationwide commemorations of the uprising in March—parades, re-enactments, marches—sparked a prolonged period of reflection upon themes of Irish identity and the legacy of 600 years of British rule.
So the dedication of the biennial to artists whose work addresses the contemporary impacts of colonialism makes sense. It is interesting, too, to see Ireland’s culture considered as symptomatic—even archetypal—of a wider history of countries to have emerged from the shadow of colonial rule in the 20th century. Thus visitors to the biennial, staged in venues spread across the city of Limerick, are invited to consider how work being made by artists in postcolonial West Africa or Southeast Asia might pass meaningful comment on Irish experience. These alternative perspectives are particularly welcome because they provide an antidote to the historical tendency to try and identify a uniquely Irish cultural heritage untainted by external (British) influences. Instead, Kouoh suggests that Ireland belongs to a community of countries in recovery from colonialism, and was perhaps the first among them. It might seem obvious to state that Ireland was once a colony, but the proposal that the country might have as much (or more) in common with West Africa as with Western Europe does challenge conventional readings. 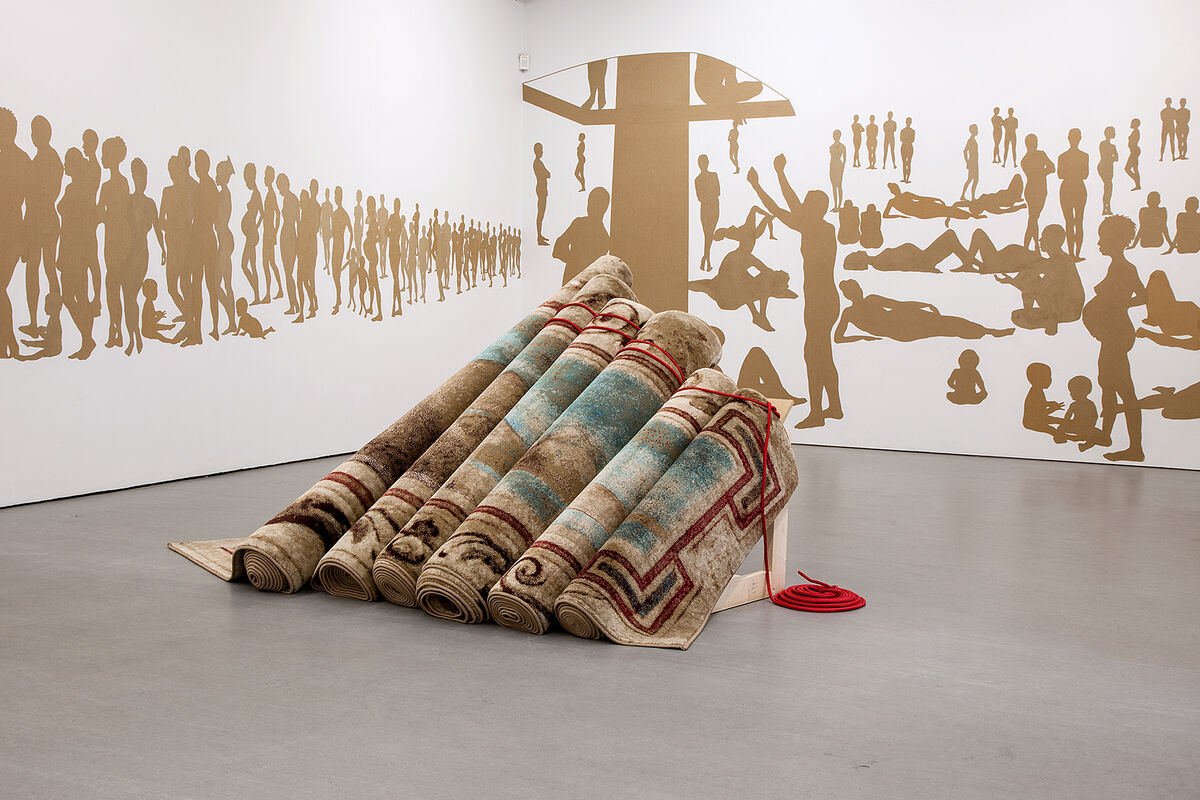 The group show across the two floors of Limerick City Gallery of Art makes this point explicitly.
Mary Evans
takes the title for her mural Thousands Are Sailing (2016), in which silhouetted figures queue against the wall of the gallery as if in line for a departing boat, from a song by The Pogues addressing Ireland’s history of forced emigration. The symbolism of the current refugee crisis carries a particular resonance in Limerick, from whose ports many emigrant ships sailed to the United States during the Great Hunger. Further highlights at the venue include
Kapwani Kiwanga
’s evocative room-sized installation A Memory Palace (2015), which draws together disparate multimedia elements in something approaching a fractured collage of cultures and heritages, and
Otobong Nkanga
’s startling tapestry The Weight of Scars (2015). Ten photographic images are printed onto interconnecting discs on the surface of the textile, caught as if in a net controlled by two enigmatic figures. Nkanga, an orphan who lost almost all documentary record of her childhood and family in a house fire, addresses what it means to be dispossessed of one’s history.
Downstairs, two brightly colored lace costumes exhibited on mannequins—
Godfried Donkor
’s Rebel Madonna Lace Collection (2016)—connect the host city’s past fame as a producer of embroidered needle lace to Ghana, where the fabric is a luxury product. A quibble is that by refraining from showing the local corollary to the African tradition (or providing supplementary information in the form of wall texts), the curators removed what might have been an entry point to the whole exhibition for visitors less familiar with the particular codes and signifiers of contemporary art. Advertisement
Costumes, textiles, and crafts are recurring themes of the biennial, and find their most theatrical expression in a dank turret of King John’s Castle, Limerick’s 13th-century Anglo-Norman heart of colonialism. For Water Image, Petit and Smooth (2015), Vietnamese artist Võ Trân Châu tracked down surviving members of the Nguyen royal family, the country’s last dynasty, and asked each for a piece of clothing. From the cloth, she produced an imperial gown resembling a patchwork technicolor dreamcoat, which is suspended over a reflective pond. It’s a visually arresting expression of the way that identity and status is dependent as much upon costume—the way we present ourselves to the world—as genetic or cultural lineage.
Cleeve’s Condensed Milk Factory—a sprawling industrial complex that once burnished the local air with the smell of toffee—provides the spectacular setting for an engaging mix of performances, moving image works, and installations. The inclusion of Ulrike Ottinger’s The Conquest of the Happy Islands – A Colonial Opera (1984), sets a dreamlike, transgressive tone which is only sporadically taken up by other works in the show, the majority of which are more explicit in their political and pedagogic intentions. For all the theatrical potential of the space, much of the most compelling work was realized on a more intimate scale, notably the video installations by Ican Ramageli, the Senegalese duo Journal Rappé, Larry Achiampong, and David Blandy.

7 Images
View Slideshow
Kouoh stated in her press conference that “curators are storytellers,” yet her exhibition seeks firstly to lay bare the stories that we tell ourselves. Welcoming visitors to the factory, Kostas Bassanos’s In Search of the Exotic (2016) picks out in tall steel letters a Greek phrase that translates as “Because the Barbarians Are Coming Today.” The line is taken from C. P. Cavafy’s poem “Waiting for the Barbarians,” which in turn lent its name to J. M. Coetzee’s postcolonial novel. Much barbarity, as that fiction and the history of colonialism tells us, is perpetrated in the name of civilization. The biennial’s attempt to bridge the gap—between “us” and “them,” between Europe and Africa—is ambitious and timely, as the victims of a war for which Europe is at least partly responsible are turned back at our borders. We are “still barbarians,” Kouoh says, “because we have not found a way of living together which is respectful of every human being.”
—Ben Eastham
Related Stories