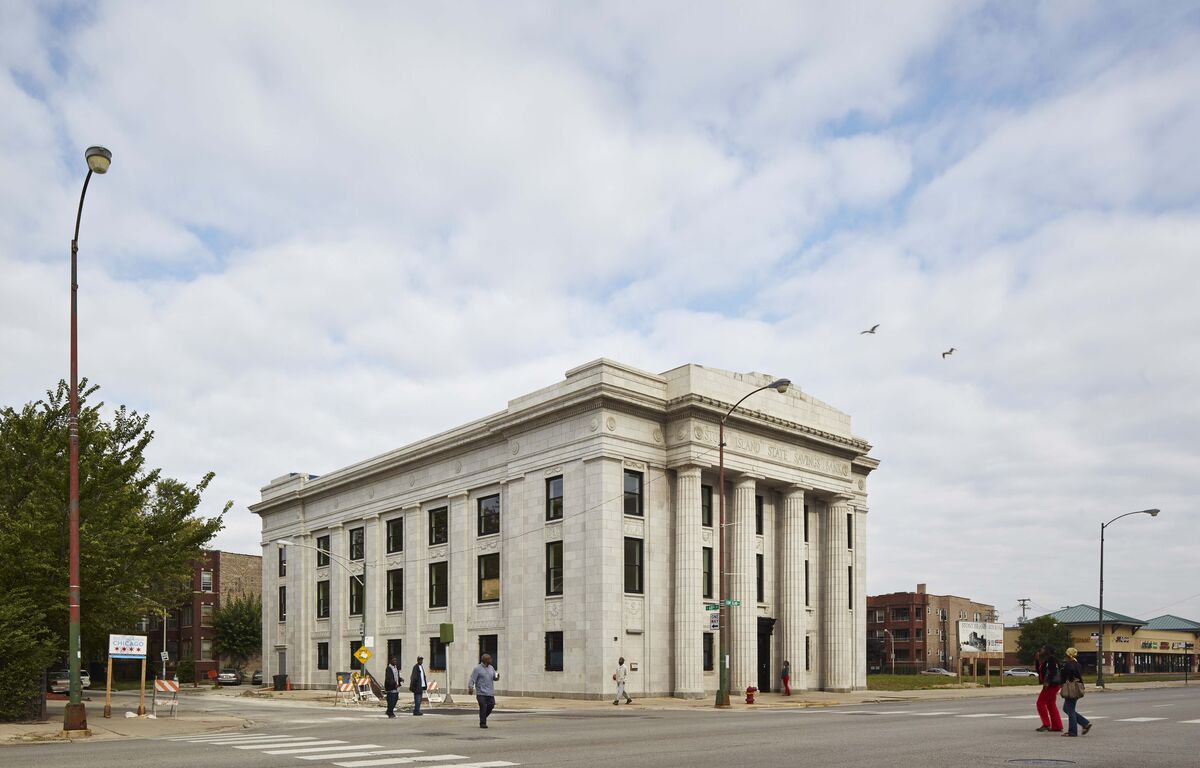 The former Stony Island Trust & Savings Bank stands tall and heavy at East 68th Street and South Stony Island Avenue, situated between Chicago’s Greater Grand Crossing and South Shore neighborhoods, in an area whose rich architectural history is contrasted by now-blighted homes and dwindling infrastructure. An empty lot abutting the bank magnifies its weight. There, tufts of unmowed grass render the building’s white, pillared façade an outlier. Yet considering the neighborhood’s past, including its location near the 1893 Chicago World’s Fair and its grand White City—a group of buildings clad in gorgeous white stucco—the bank also appears right at home.
This structure is home to the latest project of the Rebuild Foundation, a nonprofit founded by artist
Theaster Gates
. Often lauded as the darling of Chicago’s fine arts scene, Gates—who is native to the city—founded the organization in 2010 with the mission of “rebuild[ing] the cultural foundations of underinvested neighborhoods and incit[ing] movements of community revitalization that are culture based, artist led, and neighborhood driven.” The bank first opened its doors in 1923 to primarily European residents, a demographic that changed rapidly during the Great Migration that took place between 1915 and 1950. As black populations moved in, whites moved out. The building deteriorated after it closed in the 1980s and was soon slated to go the way of many beautiful, crumbling structures: demolition. But before it reached this critical point, Gates purchased it from the city for one dollar and set about fundraising for its restoration. According to the Rebuild Foundation’s development manager Amy Schachman, the bank’s cheap sale was a strategic move by the city, who knowingly “gave” him the building with the understanding that he would have the financial means to restore it.
But bringing the building back to life was no small feat. When Gates acquired it in 2012, the bank’s basement was flooded with almost five feet of water and the roof and ornate plaster ceilings were collapsing. Gates raised $4.5 million for the project, in part by removing fragments of the bank’s marble slabs, which he called “bank bonds,” and selling them as works of art.
Following the restoration, the building’s history still seeps from every crack in the interior. The lofted first-floor ceilings have been recovered, their ornamented crown moldings cleaned and revived. The building itself is landmarked, along with certain fixtures. Those features, such as an iron staircase railing and textured glass windows, have been repurposed; the railing is now placed decoratively in the first-floor promenade, while the new third-floor offices benefit from the privacy granted them by the building’s opaque windows.

Advertisement
Gates chose to leave some of the interior details unfinished—perhaps to heighten the feeling that the space is a memento mori to the neighborhood’s heyday, or to indulge our collective fascination with ruins. Regardless, it is a triumph of historic preservation: a once-derelict building will become a catalyst for artistic research and exhibitions, as well as housing the Rebuild Foundation’s staff offices.
The building will open to the public on October 3rd in its new incarnation as the site of Rebuild’s Stony Island Arts Bank. The three-floor structure combines gallery, performance space, and a storage archive for several rare collections, including those of the Johnson Publishing Company (of Ebony and Jet magazines), the Edward Williams collection of “negrobilia,” and the record collection of famed Chicagoan DJ Frankie Knuckles. Ken Stewart, CEO of the Rebuild Foundation, notes that, much like the building, the collections will be rejuvenated. “We want to breathe new life into all of our collections, which in most part have fallen out of circulation. We’re asking artists, archivists…and others to help us reimagine [them] in a way that gets them back into cultural circulation.” Lee Bey, former Chicago Sun-Times journalist and architecture photographer, notes that Gates’s efforts are necessary for the health of the neighborhood. “So much of that neighborhood’s 1920s retail and commercial architecture has been lost since the 1960s,” he says. “And once lost, many of these sites remain vacant lots for years. Preserving and reusing the bank is a win-win.”
Yet this critical juncture—where artistic vision and neighborhood revitalization meet—is a sensitive one. If its purpose is to transform a blighted community, then it’s important to ask just how Gates and the Rebuild Foundation are working to evaluate their impact. “The question is: does this become a true asset for the community—or just an asset that happens to be located there, that a select few from outside the neighborhood will feel agency to use?” Bey asks. “A true asset will embrace the community and will be embraced by the community. And a true asset will spark development that is useful to that community.”
Stewart notes that members of the neighborhood have been involved in weekly meetings throughout the planning process. In that spirit of inclusion, Rebuild will offer free open hours, which may or may not encourage residents to visit. “We’re eager to see how that plays out,” he comments. However, measuring the effect of art spaces on the regeneration of a neighborhood is difficult. “We have a fundamental belief that being around art, seeing good art…are inherently good things. Success for us is rebuilding the cultural foundations [of the neighborhood].” In an interview for BOMB magazine in 2014, Gates discussed issues of neighborhood decline with the artist Tom McDonough. “What is blight? What does blight mean?,” Gates asks. “For me, it means a place that has potent or latent value, but which, for whatever reasons, is psychologically disgraced. As a result of that disgrace, or acts of violence, there has been a devaluation.”
For Gates, then, urban decline is not just an issue of architectural or political degradation, but a psychological one. In that respect, creating a space to house the production and exhibition of art seems a fitting remedy to the problem. It remains to be seen whether Stewart’s “good” art to which the neighborhood will be exposed through the Stony Island Arts Bank will be the panacea that the media often makes Gates’s work out to be. But with art’s undoubted ability to touch the human psyche, it’s a step in the right direction.

Anjulie Rao
The Stony Island Arts Bank will open to the public on October 3, 2015, during the opening of the Chicago Architecture Biennial.
Related Stories