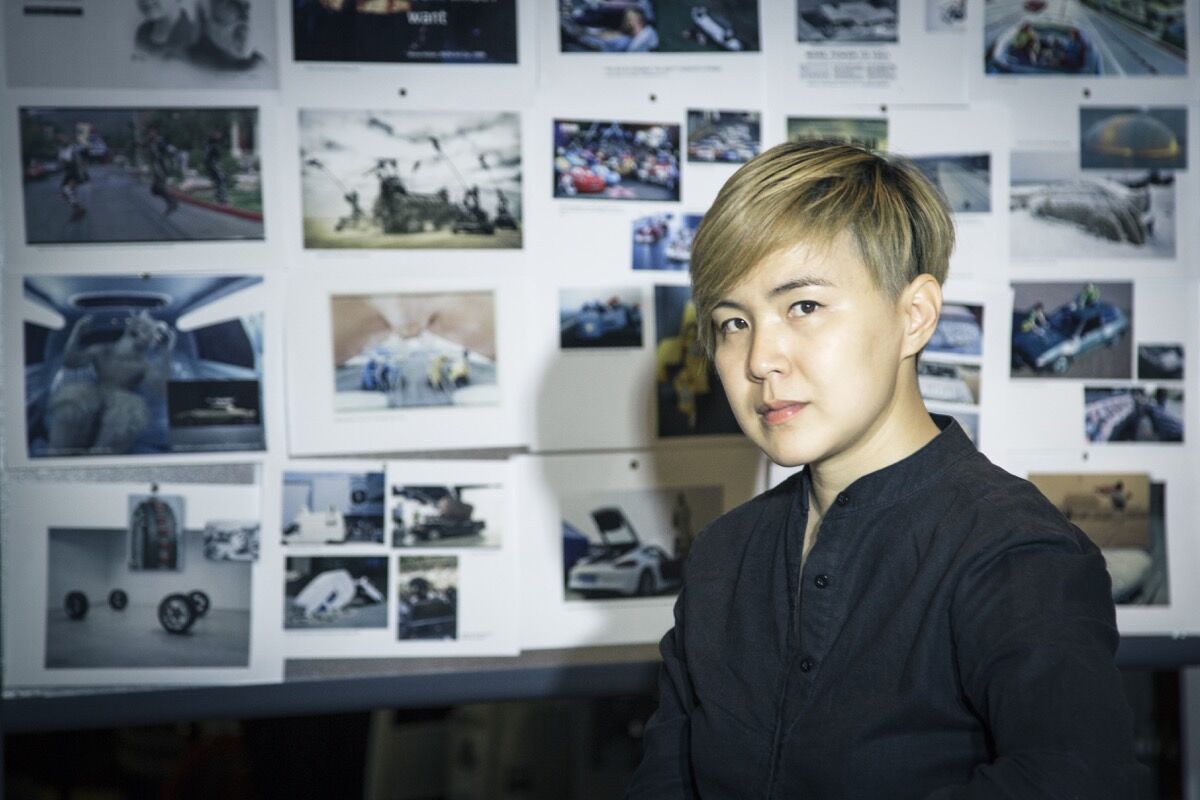 Portrait of Cao Fei © the artist and Cao Fei Studio. Courtesy of BMW.

Cao Fei
is among the most consequential Chinese artists of her generation. Currently celebrated with a major survey at MoMA PS1, the artist’s work charts her homeland’s rapid growth in multimedia works that range from meditative studies on manufacturing to RMB City (a megalopolis within the virtual world of Second Life) to a Zombie film spurred by the impact of cars on the human body. Last fall, BMW announced that Cao Fei would follow
Jeff Koons
as the 18th artist to dress one of its racing Art Cars.
John Baldessari
also received the honor as #19. Both artists were chosen by a jury that included Richard Armstrong, Chris Dercon, Udo Kittelmann, Matthias Mühling, Hans-Ulrich Obrist, and Beatrix Ruf.
At 38 years old, Cao Fei is the youngest artist among those selected to create a BMW Art Car. That list includes a who’s who of recent art history:
Alexander Calder
,
Frank Stella
,
Roy Lichtenstein
,
Andy Warhol
,
Robert Rauschenberg
,
David Hockney
,
Jenny Holzer
, and
Olafur Eliasson
among them. But that’s not the only first for Art Car creator #18—she’s also the only one to have never possessed a driver’s license or driven a car. Here, the undeterred artist tells Artsy why China’s economic boom has nonetheless put automobiles at the center of her practice and why she chooses not to get behind the wheel.
Alexander Forbes: You’re still in the early stages of the project. What’s on your mind as you make preparations?
Cao Fei: Right now I’m really focused on research, particularly the technology and materials that I’ll be able to work with. The car creates limitations in what you can do: You can’t add weight or stick something onto it. When it’s racing at something like 300kph, if you put something on it, it would just fall off. Putting moving image work on the car would also be very hard. If you were projecting an image onto the car, you would need additional, consistent electricity, which is difficult if you have to race at high speed. And if the car itself is too bright, it could affect other cars on the race track.
I heard Jeff Koons wanted to try some special materials but it was going to make the car 10 kilograms heavier, which they said couldn’t work. Olafur, who made the car before Jeff Koons, was more free in what he could do. He could make ice cars, cars that were created in a more conceptual way. But after him, the car has had to be able to race. It has to be functional. So it takes a lot of time to define a concept and materials that work. It could be easy if you do something where you just map the car and create a digital graphic that can be applied to the car with a sticker. But anybody can do that.
AF: You’re the youngest artist ever to make an art car. Does that matter?
CF: I think I need to forget it. For an announcement it’s nice. But I don’t need to think about this. Technology and social media is important to me. But I don’t really need to use it for the art car or use it in the same way that people expect. I don’t want someone to see it and say, “Oh, that’s Cao Fei’s work. She put moving image on the car, it must be Cao Fei.” I want to do something different, go in a different direction while still maintaining a focus on technology in some way. I also want to make some work afterwards, around the car. It could be a film or a game; it could be anything else. But when I show the car, I want to have something else with it, not just paint the car and be finished. 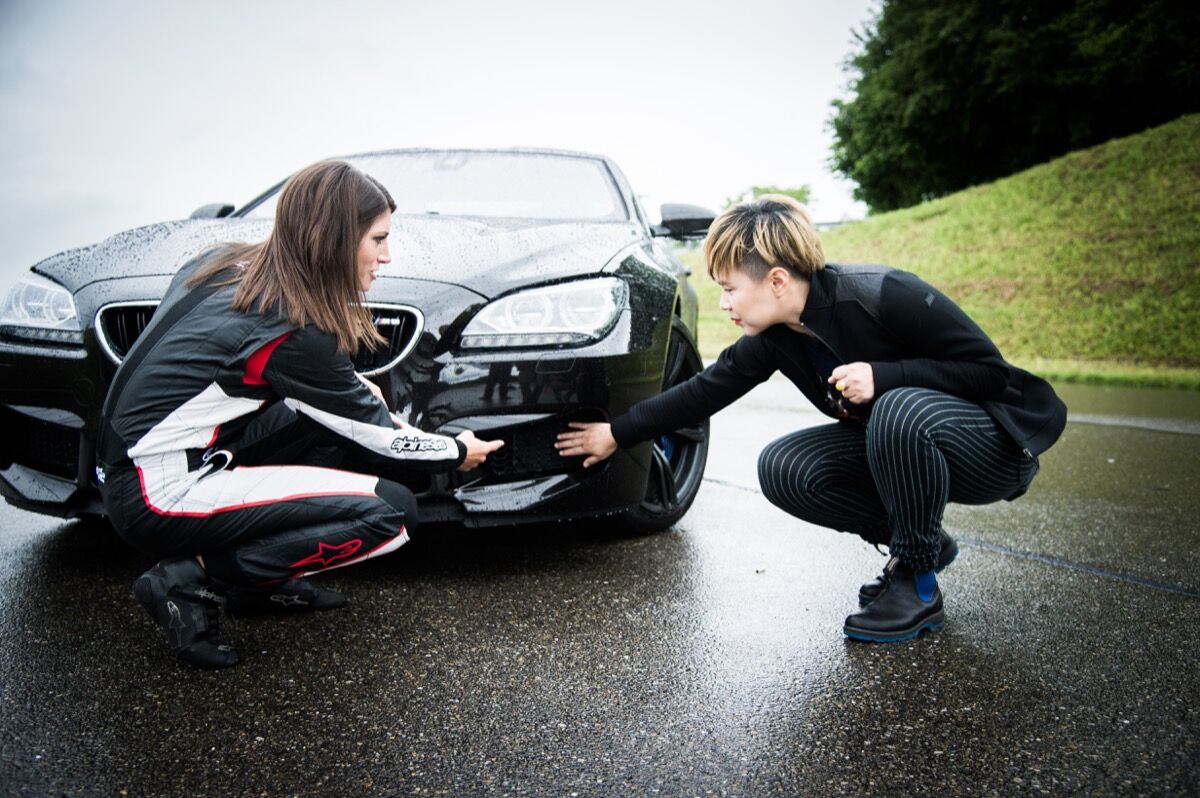 Cao Fei at a BMW racing experience in Switzerland. Photo courtesy of BMW.

AF: You’ve never had a driver’s licence or driven a car. Yet, over the recent years of economic boom in China, it’s become a status symbol to move from having a bicycle to having an automobile. That obviously has a major tie to your work’s focus on the generational shifts in China brought on by the economic expansion. Is there some great irony here for you in approaching this project?
CF: Right now China is at a transitional point. Some people still prefer having a car because it’s a symbol of a certain social status. And some people prefer that a bike is free. It’s more environmentally friendly. I take a bike to the studio or take my kids somewhere on the back of it. It’s simple. There’s not this added burden. Before, we all thought you had to have a car, that it’s the best. In China, if you wanted to marry somebody, the guy had to own a house and a car. Now, it’s a transition to thinking about the future. It’s different.
AF: Do you think that will continue to change now that the economy isn’t growing as rapidly as it once was?
CF: I think it’s both that the Chinese economy is changing and that there is also more globalization. The younger generation thinks differently about having a big, expensive car and instead is trying to envision a new lifestyle or way of living. The car has a heavy symbolic meaning. It’s very related to the speedy economic development of China, something I’m particularly interested in. But it also has a relationship to industry and consumption.
In one of my films called Haze and Fog (2013), a car crashes into somebody on a bike. What’s happening now is that pedestrians, when they see a nice car, they sometimes intentionally rush into the road to get hit because they want the compensation from getting injured. In the film, after the pedestrian was hit by the car, the car owner came out and beat him up because he was afraid that the guy would ask for unreasonable compensation. There was no reason for the driver not to beat him up. As he’s getting beaten up, the pedestrian immediately turns into a zombie and walks away.
It reflects my observations on Chinese society’s high-speed development. It goes beyond the car itself. The car is just a symbol for many things that have taken place. What I’m most interested in is what happens after such high-speed development.
AF: Do you see any major shifts in society now that people have stepped out of this period of explosive growth?
CF: Now, the Chinese government is promoting an idea called the “new normal.” That refers to the normal speed that society is currently developing at. The government is trying to educate the public that it’s not normal for us to develop at such a high speed as has been the case before. What we have now is a normal speed of development which all other societies have as well. 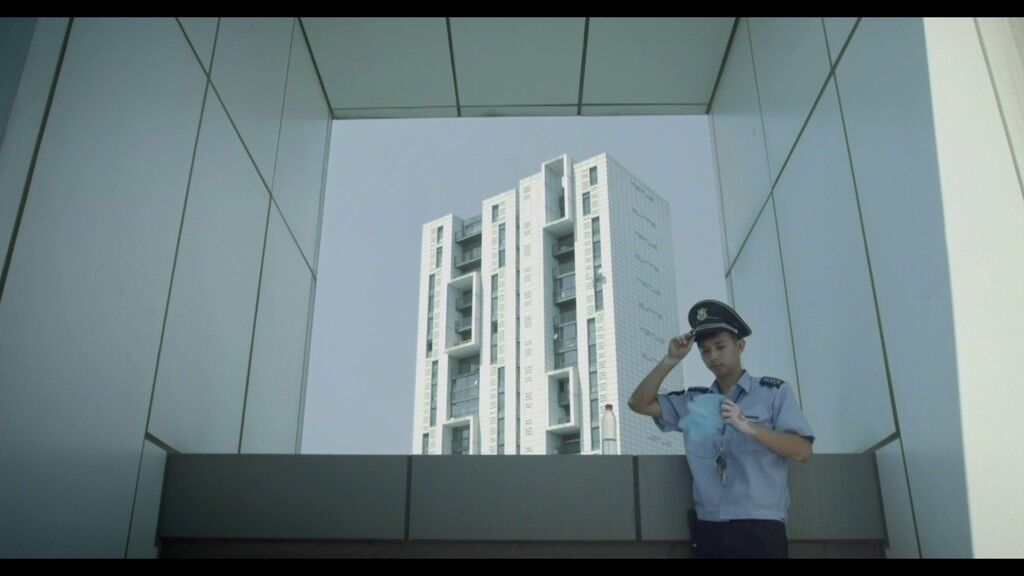 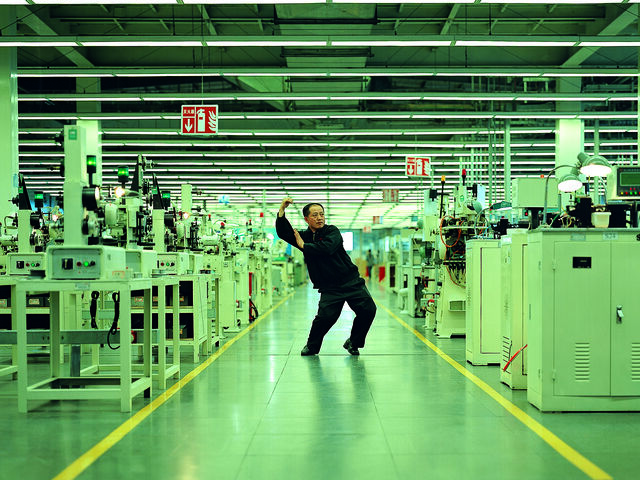 Cao Fei
Whose Utopia, 2006
"Cao Fei" at MoMA PS1, Long Island City
Advertisement
AF: What consequences does that have on people’s lives? For example, does the internet become a means of escaping the “new normal”?
CF: People use the internet a lot. But in China, most people use it either for WeChat, for gaming, or for lifestyle services like ordering food or a massage. In China, life has certain limitations. So the internet serves more as a form of entertainment or a way of servicing and expanding your life. In 2006, before the economic crash, people had high anticipations about the future. All over the internet there was a sense of optimism, looking forward to the future. That’s not happening now. Now there’s a transition from it being a portal to the future to a place where the future is your everyday life.
I made a work [Whose Utopia (2006)] 10 years ago about the OSRAM factory. They were making florescent lighting. Now they’re making LED lighting because it saves energy. I went to the factory and stayed there for a half year. The video shows the conditions for workers in an international company at that time. We call that moment the “Made in China” time. But now, all the manufacturing has moved to other places: to Vietnam or the Philippines. Chinese manufacturing has a high cost now. And many of the factories are automated now. I recently participated in the World Economic Forum; they have one in China and one in Davos. They all talked about robots, how robots are the future. You can see that in the future, there will be less manpower needed. It’s interesting to look at the manufacturing life, not only in China, but China serves as a good example. China has so many people but now they want to promote that everything is going to be run by robots.
AF: What happens to the people?
CF: Exactly. I don’t know where the people are, but now much of industry lacks manpower. At the iPhone factory there are more people because it requires more detail. But the young generation doesn’t want to go to factories. They don’t want to dig the roads. We have machines for that. They come out of university and they want something more. It’s like a new blue collar class, and the cities have to accommodate all of them. They might become a driver for a company like Uber and then they may also be trading in the stock market at home. The whole social phenomenon is changing.
Alexander Forbes is Artsy’s Consumer Marketplace Strategist. He was previously the Executive Editor of Artsy Editorial.
Related Stories

China’s Most Important Artist Born after the Cultural Revolution 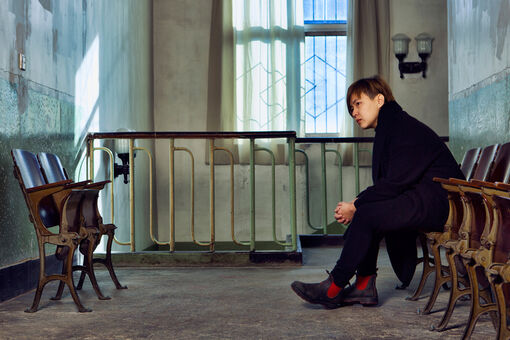