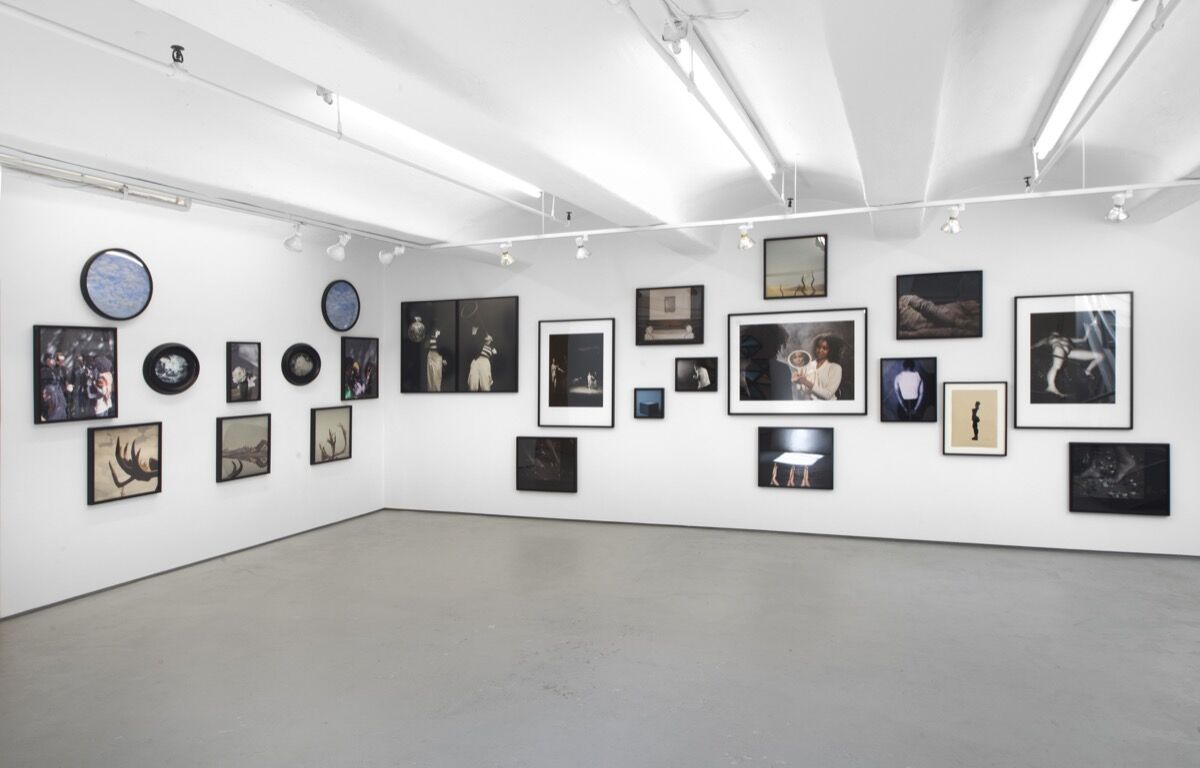 On Friday evening, over two years after her traveling exhibition made its final stop at the Guggenheim Museum, artist
Carrie Mae Weems
sat on a green couch on the lower level of Jack Shainman Gallery’s 20th Street space. “There’s absolutely nothing in this exhibition that is”—fingers forming quotes in the air—“new,” she tells me as she faces a wall of her series of photographs, titled “Equivalents” (2012), part of the two-venue exhibition that spans both of the gallery’s Chelsea locations. “All of these are very old ideas that I’ve been exploring, thinking about, and struggling with for years.”
Since 1978, Weems has spent her career equally tracing and contesting power and the very specific ways it has informed representation, past and present. The artist’s seminal 1990 work of 20 black-and-white photographs titled “The Kitchen Table Series” wrestled with the sustained power dynamics of a black family and friends. In the images, for which her book of the series recently won a Lucie Award for photography, the figures communicate by looking. A child watches her mother; a woman peers into a mirror; a group of female friends sit around exchanging expressions; a wife overlooks her husband. All the while the viewer is invited to gaze at how power, or the lack thereof, is racialized, feminized, or sexualized and impressed upon the body. 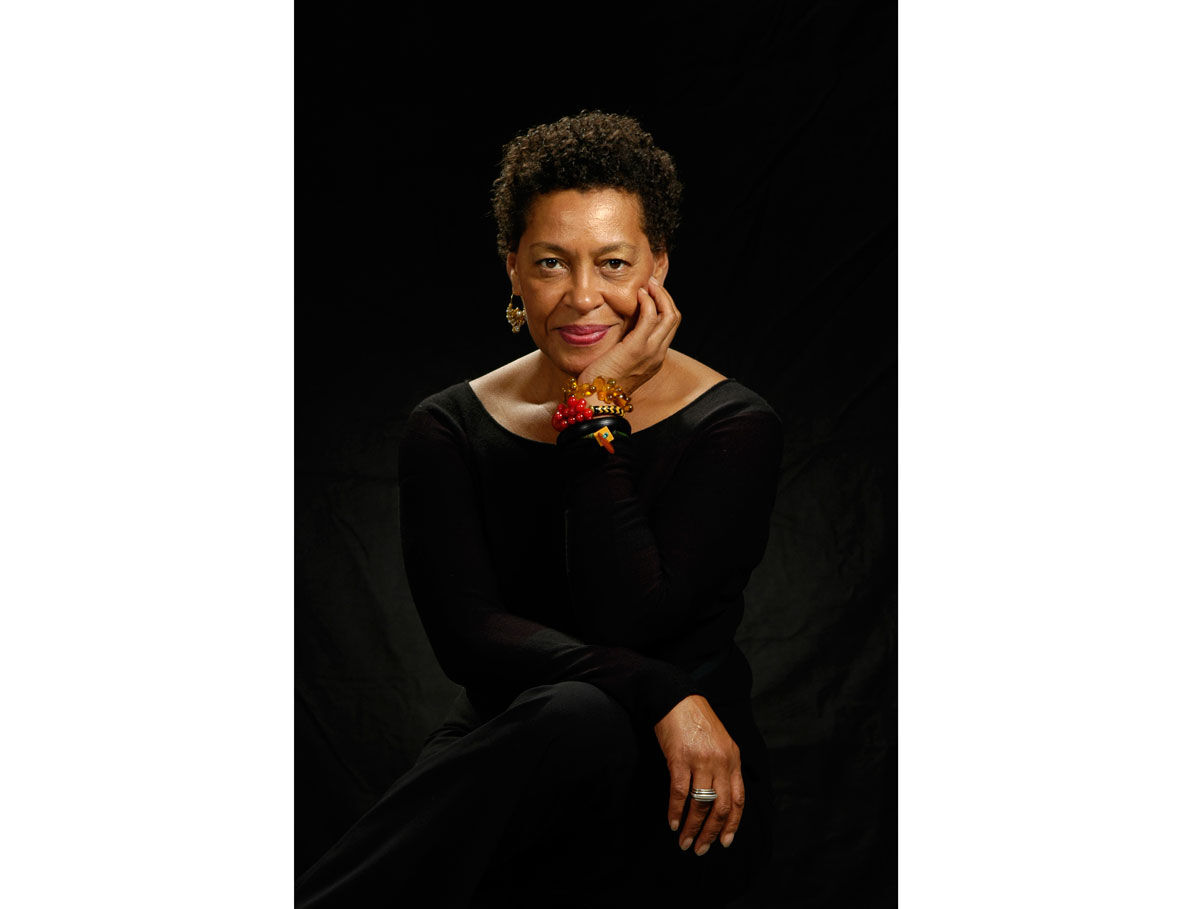 Later that decade, Weems appropriated the 19th-century Harvard biologist Louis Agassiz’s “Slave Daguerreotypes” from the 1850s, and other images. The resulting series, “From Here I Saw What Happened and I Cried” (1995–6) presented 33 toned prints paired with text to examine how photography as a medium has contributed to the stereotyping of blackness. Weems examined how black people were presented as stereotypes like “a scientific profile,” “a negroid type,” and “mammie, mama, mother & then, yes confidant—ha.” (The series is now a part of the Museum of Modern Art’s collection.)
Picturing women and critiquing the art-historical canon are also persistent themes. In such works as “Family Pictures and Stories” (1981–82) and “Not Manet’s Type” (1997), Weems contemplates race, gender, class, and how the black body is presented throughout the history of art. 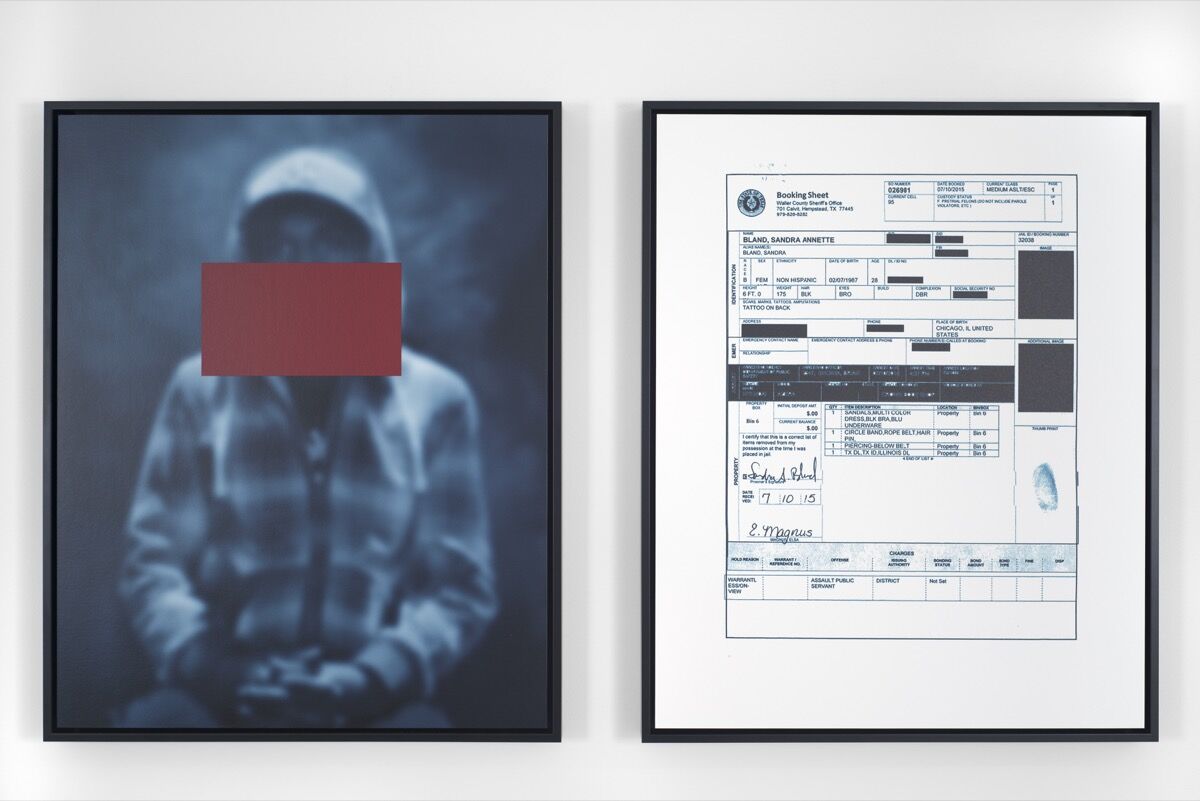 Advertisement
Despite what Weems says, while the new show’s ideas, motifs, and questions—like, what is power? How is it constructed, employed,and represented?—are the same, they are manifested through refreshingly new dynamics at Jack Shainman’s galleries. On 24th Street, Weems created a series of photography, text, and video, titled “All the Boys” (2016), which evolved out of her performance project from earlier this year, Grace Notes: Reflections For Now. The series responds to the recent killings of young black men, women, and children by police officers in the U.S. In All the Boys (Blocked 3), for instance, Weems presents a diptych of a blurred hooded black male behind a red color block, next to a Ferguson Police Department incident report with all identifying information blacked out as if it is classified.
Lining one wall in the gallery is a series of text panels that provide the basic facts—age, name, date of death, race, height, and weight—of 10 unarmed victims of police shootings, including Philando Castile, Tanisha Anderson, and Eric Garner. The “Usual Suspects” all fit one single description, which Weems states as: “Matching the description of the alleged, perpetrator was stopped and/or apprehended, physically engaged, and shot at the scene. Suspect killed. To date, no one has been charged in the matter.” 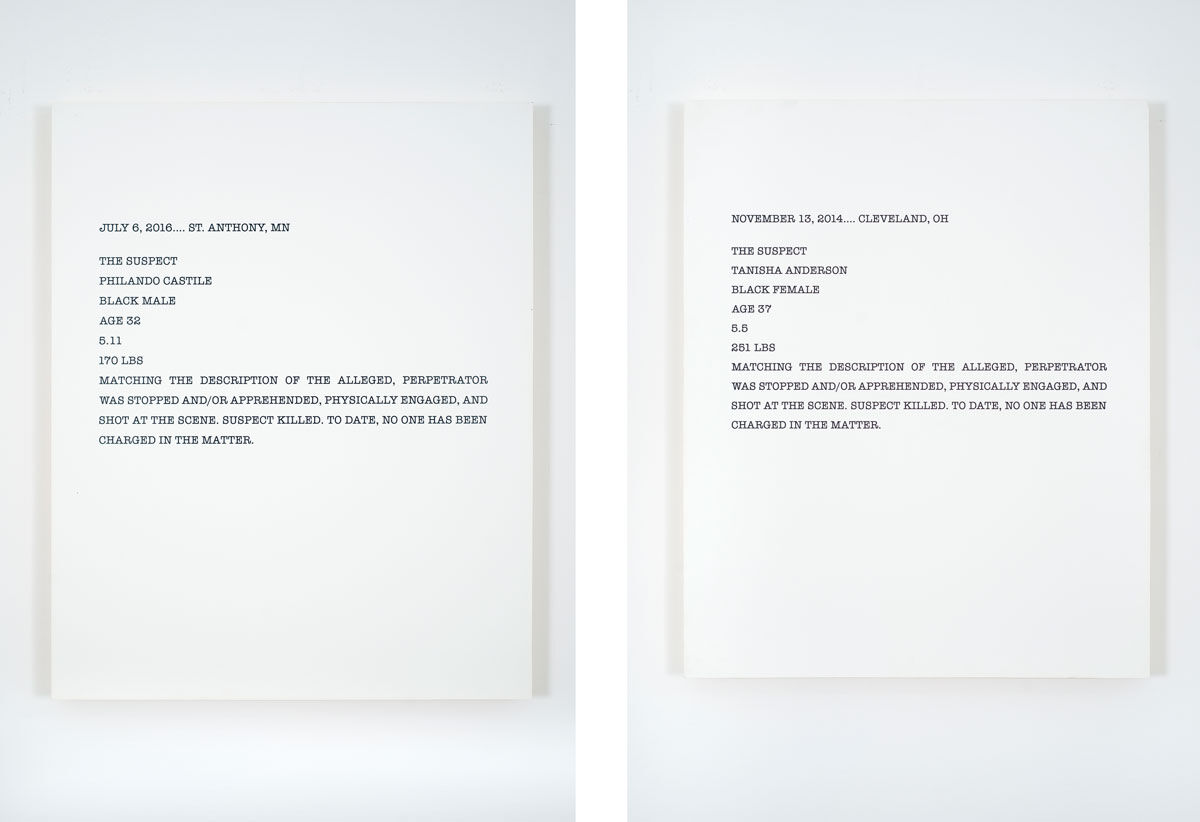 “Four years ago, I was working on a film project, and I invited a group of young men—musicians—to play music for me and they all arrived in hoodies,” Weems says. “Trayvon Martin had just been killed, maybe several months before and I had done a small piece around the tragedy of that. I asked the young men if I could photograph them.” She pauses and asks rhetorically, “What does it mean to wear a hood?” I say, “This idea of the hood has not only travelled throughout our community, but has also fascinated artists.
David Hammons
’s In the Hood (1993), the young photographer
John Edmonds
has a billboard up on 29th Street of a figure, presumably black, in a hood, and you now with ‘All the Boys.’” She quickly replies, “Certain artists.” We both laugh.
“When I made those photographs, I just lived with them for a long time. And then, last year, I decided after the killing of the Emanuel 9 [in Charleston], I wanted to say something about the moment in which we live.” She adds, “I also wanted to produce a work that explored the question of grace. And in exploring the question of grace you have to explore the question of humanity.” Jabbing her hands into the air, Weems says, “The thing that really struck me about the ways in which people have handled this tragedy, whether we are looking at the young people who have started Black Lives Matter or the President singing ‘Amazing Grace,’ is we are continuing to ask for our humanity to be recognized. And at the same time offering the generosity of spirit even as our young men are being murdered. That’s kind of extraordinary and what really motivated the piece.” In All the Boys: Video in Three Parts (2016), in a dark back room, Weems uses the moving image as a device to monumentalize her notions of grace. 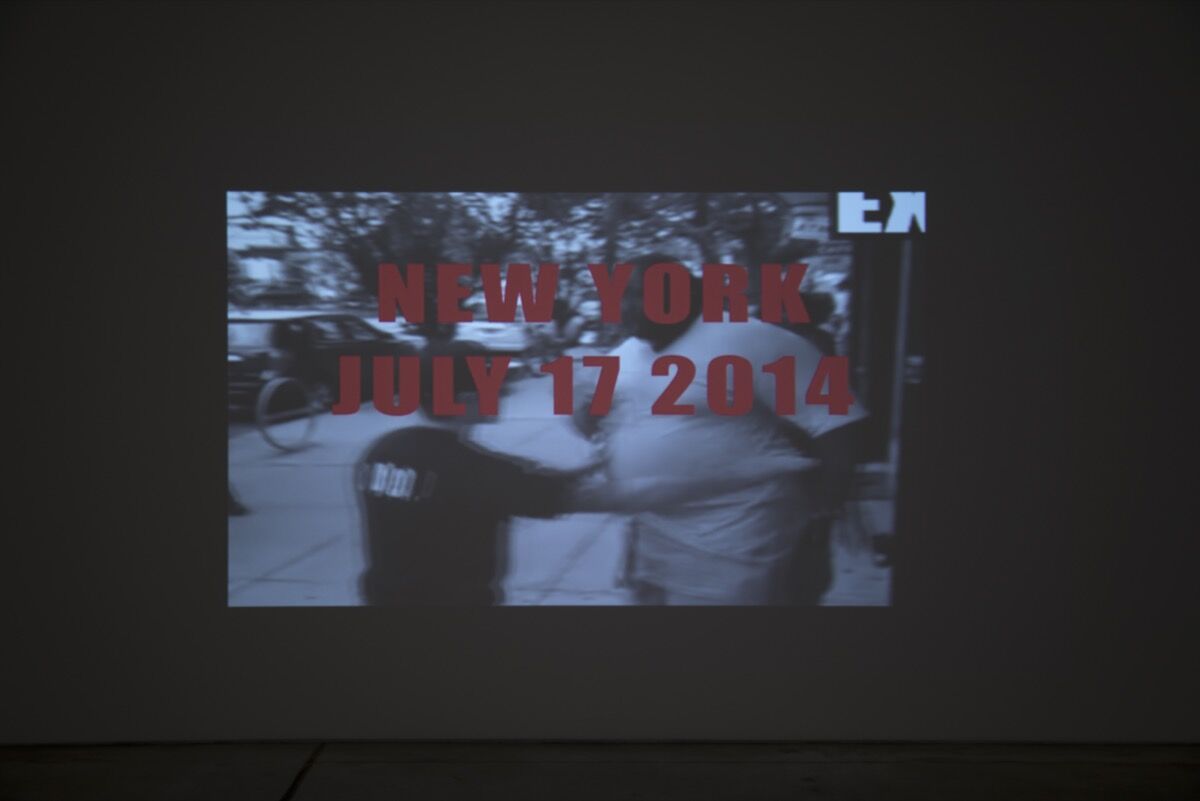 On 20th Street, the exhibition shifts to record how color has also impacted art, TV, and film. “Blue Notes” (2014) references Weems’s earlier series, “Slow Fade to Black” (2010), which used the cinematic fade to consider the opportunities black starlets were not granted simply because of the color of their skin. With “Blue Notes,” Weems mixes it up, adding in white artists like
Andy Warhol
to draw contrast to
Jean-Michel Basquiat
and Mick Jagger, who in Blue Notes (Nick and Lisa Fischer) (2014), is blocked out, in front of his former back-up singer. The color blocking suggests that oppression not only happens because of color, but gender, too. “It is very difficult to move beyond color,” says Weems, sipping a glass of red wine. “On the other hand I am very interested in color theory. What happens when you mix those colors? What do you get then?”
In “Scenes & Take” (2016), another series on view, Weems seems to be concerned with changes in representation that have occurred contemporarily in Hollywood for black actresses. Using performance, she reprises her role as the muse—seen in her “Museums” series (2006–present)—which she characterizes as “a woman of a certain age, wearing a fabulous, sexy, and innocuous black dress.” Weems inserts her muse, who never gazes at the camera, into the worlds of Shonda Rhimes’s “Scandal,” and “How to Get Away With Murder,” and Lee Daniels’ “Empire.” 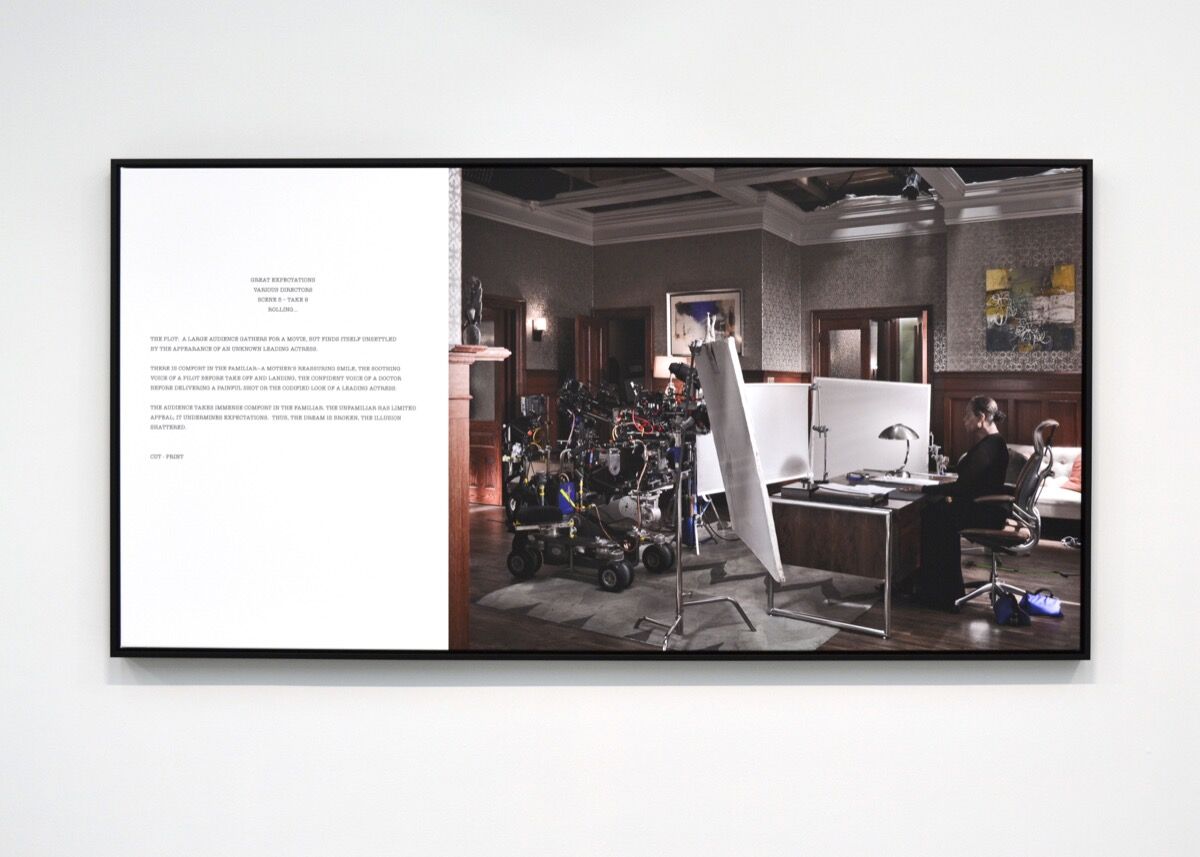 “There’s a piece called Director’s Cut, that says, ‘She presents herself at various auditions and Woody Allen says ‘Are you kidding?,’ Demme says, ‘What?’ And Scorsese says, ‘No! Get the fuck out of here!’,” Weems says laughing. For the artist, “Scenes & Take” playfully acknowledges the state of pop culture in 2016. “I was looking at these shows and saying, Kerry Washington, a star of a contemporary show, Viola Davis, a star of a contemporary show, all written by black people who are all sort of changing what is happening in popular culture.” She adds, “I wanted to stand in and position myself in sites where I thought important cultural shifts and shifts in representations are taking place.”
Those shifts are also apparent in Weems’s own 15-minute cinematic tour de force, Lincoln, Lonnie, and Me (2014). The slow-moving video installation employs a level of inventiveness that rests on a 19th-century optical illusion film technique, known as “Pepper’s ghost,” which presents images by Weems and of the photographer Lonnie Graham—historical moments, and works of art as apparitions on a shrouded stage. “Lincoln, Lonnie, and Me explores, in a straaange way, a history of segregation,” Weems says. She pauses, then adds, “When you break it all down, invariably, I am always interested in questions of representation and questions of power—that is the thing that hounds me.”
Antwaun Sargent
Carrie Mae Weems is on view at Jack Shainman Gallery, New York, Oct. 29–Dec. 10, 2016.
Related Stories