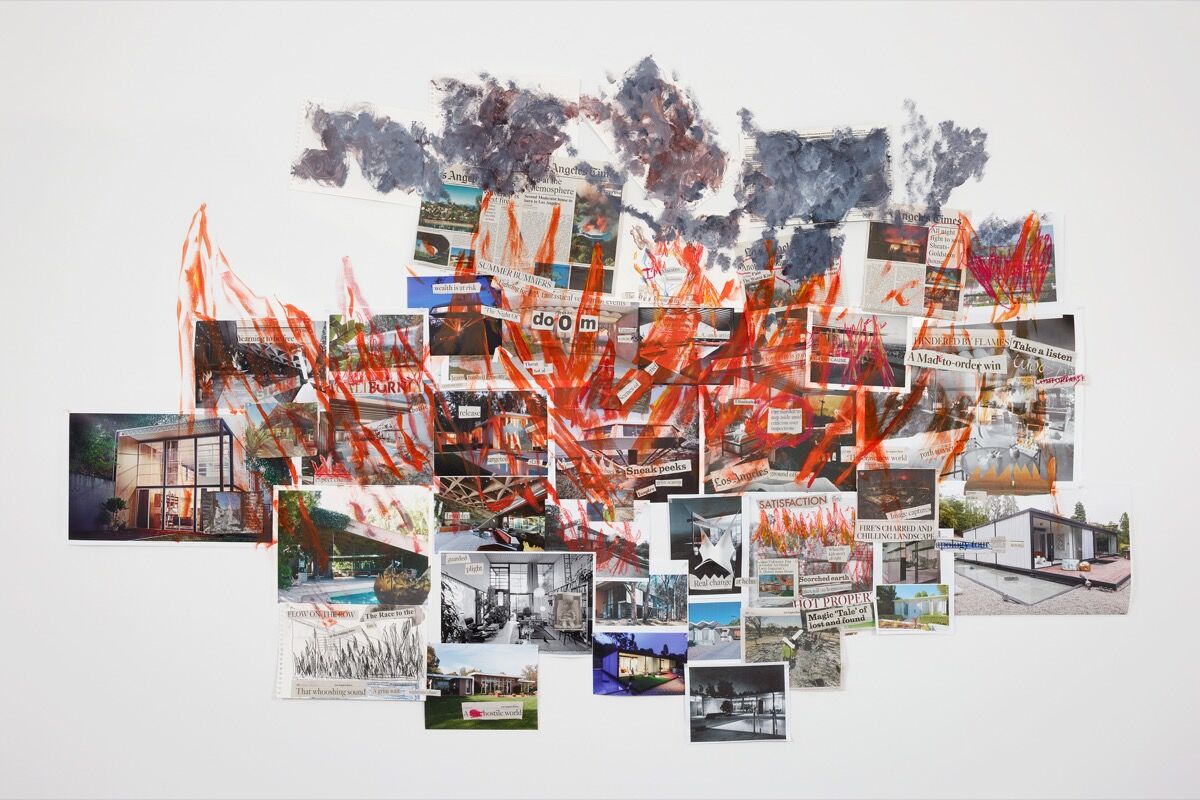 Catherine Opie
’s newest exhibition might make viewers fall for an arsonist. The black-and-white still photographs and accompanying film—Opie’s first-ever foray into the medium—are on view in “The Modernist” at New York’s Lehmann Maupin gallery through January 12th. The show follows an artist named Pig Pen as they set fire to modernist architectural icons in Los Angeles: the angular Sheats-Goldstein Residence and the Chemosphere, shaped like an elevated spaceship. John Lautner,
Frank Lloyd Wright
’s former apprentice, built both in the L.A. hills in the 1960s. After these torchings, Pig Pen creates collages that commemorate their crimes.
The character of Pig Pen straddles reality and fiction. Pig Pen is the nickname of a true San Francisco–based artist and actor, Stosh Fila (they have never burned down any buildings in real life). The film, also titled The Modernist, is a silent slideshow of still images, all but for a moment when Pig Pen lights a match at the Chemosphere; a brief whoosh unsettles the viewer, giving potency to a close-up image of fire, that eternal symbol of both creation and destruction. 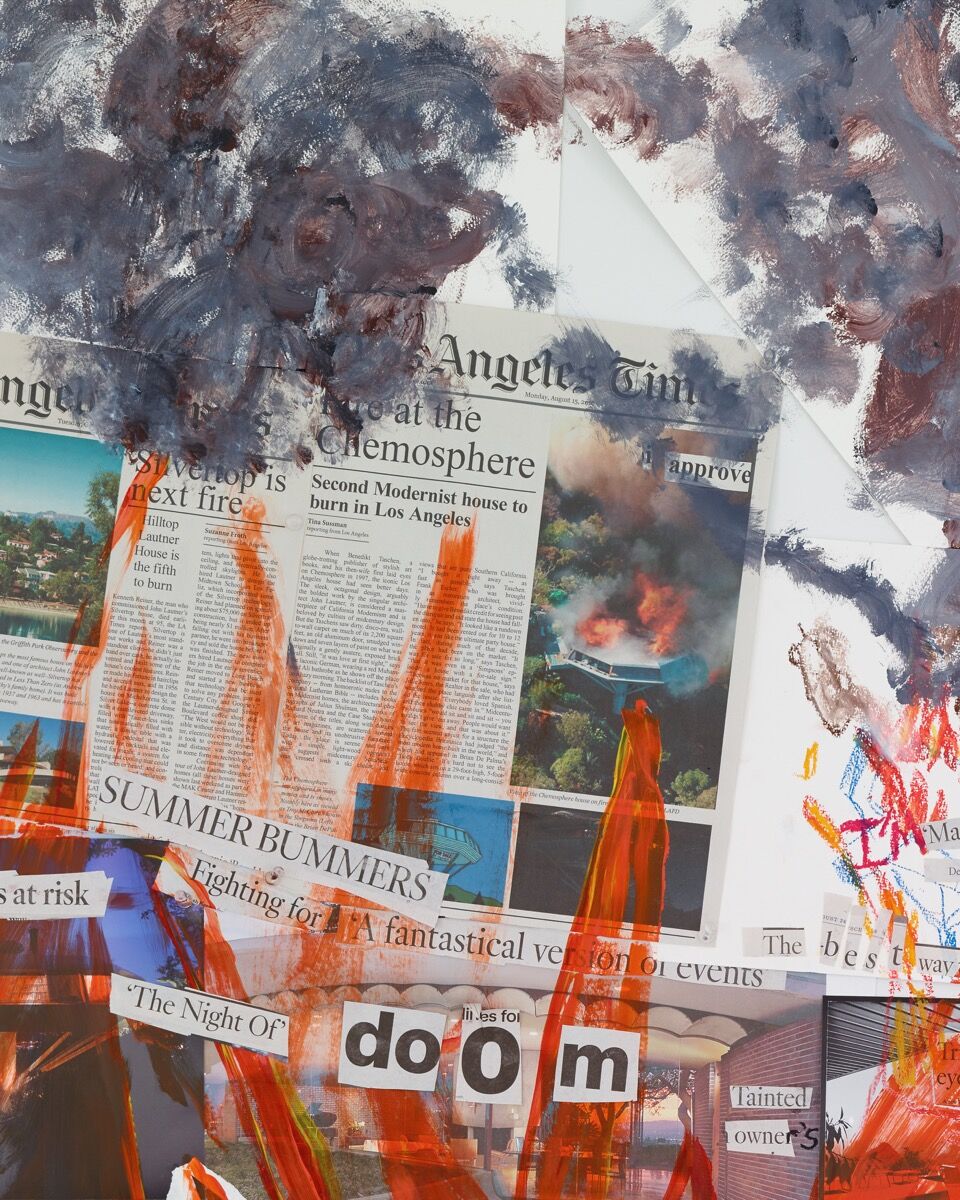 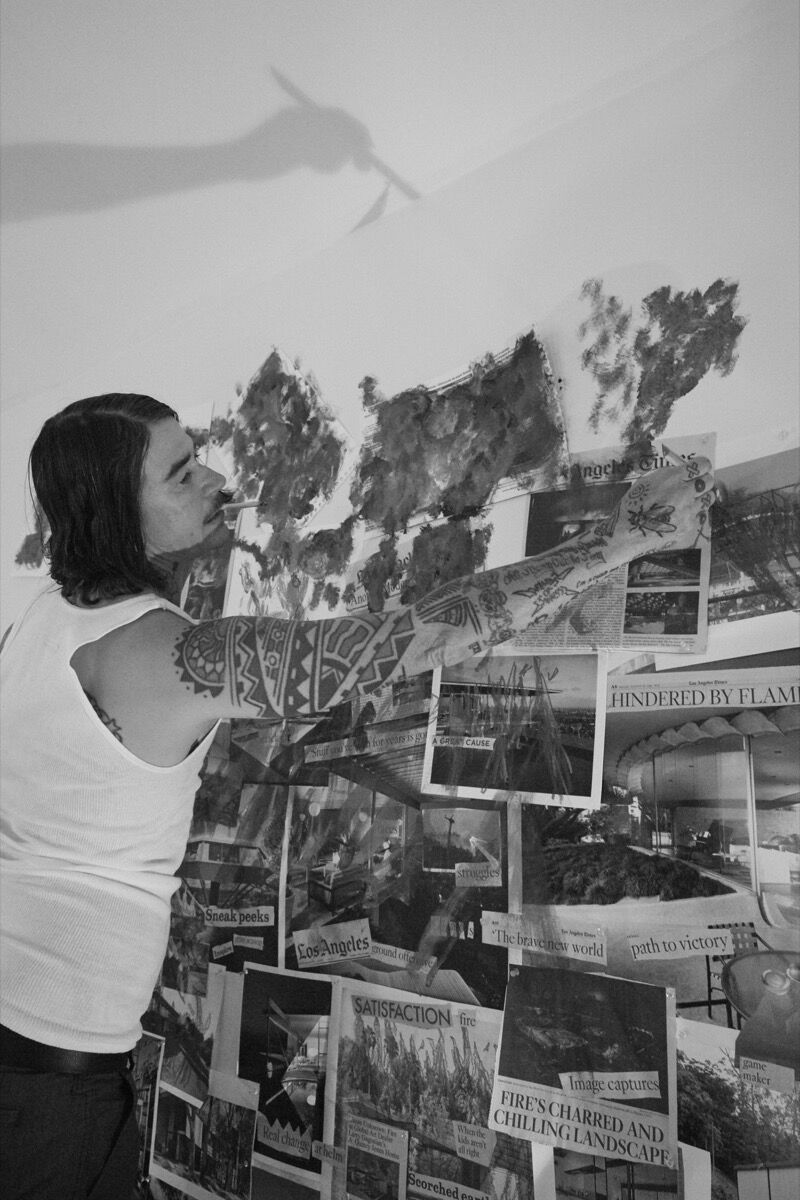 The complementary photographic series is a lovingly rendered portrait of Opie’s protagonist—whose greasy, center-parted hair, cheap white tank top, and impishly dangling cigarette suggest a 21st-century Steve McQueen. In Artist #2 (The Modernist) (2016), we see Pig Pen in the midst of making a collage—news clippings juxtaposed with their own fiery, orange scrawl. They show off a full sleeve of tattoos on their arm: bands of geometric shapes on the bicep, skulls circling the forearm, an insect on the back of the hand, block-lettered Xs and Os on the fingers. The ceiling above Pig Pen catches a delicate shadow of their arm and the writing implement. Opie’s camera suggests that the body—and not the collage—is the real artwork here.
Such a sustained mediation on a single personality makes sense, given Opie’s longtime association with portraiture. She often focuses her lens on queer and BDSM communities and practices, insisting on greater visibility for chronically underrepresented and marginalized figures. Her camera captures them not as outsiders, but as friends. The career-launching 1991 series “Being and Having” comprised headshots of a coterie of young queer women (including Opie herself) donning faux facial hair. Two of her best-known photographs are self-portraits that spotlight cuts that she’d requested be carved into her skin. 1993’s Self Portrait/Cutting shows a bloody rendering of a couple standing in front of a house, scratched between Opie’s shoulder blades; in 1994’s Self Portrait/Pervert, we see Opie sitting with needles woven through the skin of her arms, a black mask over her head, and the word “PERVERT” emblazoned across her chest. 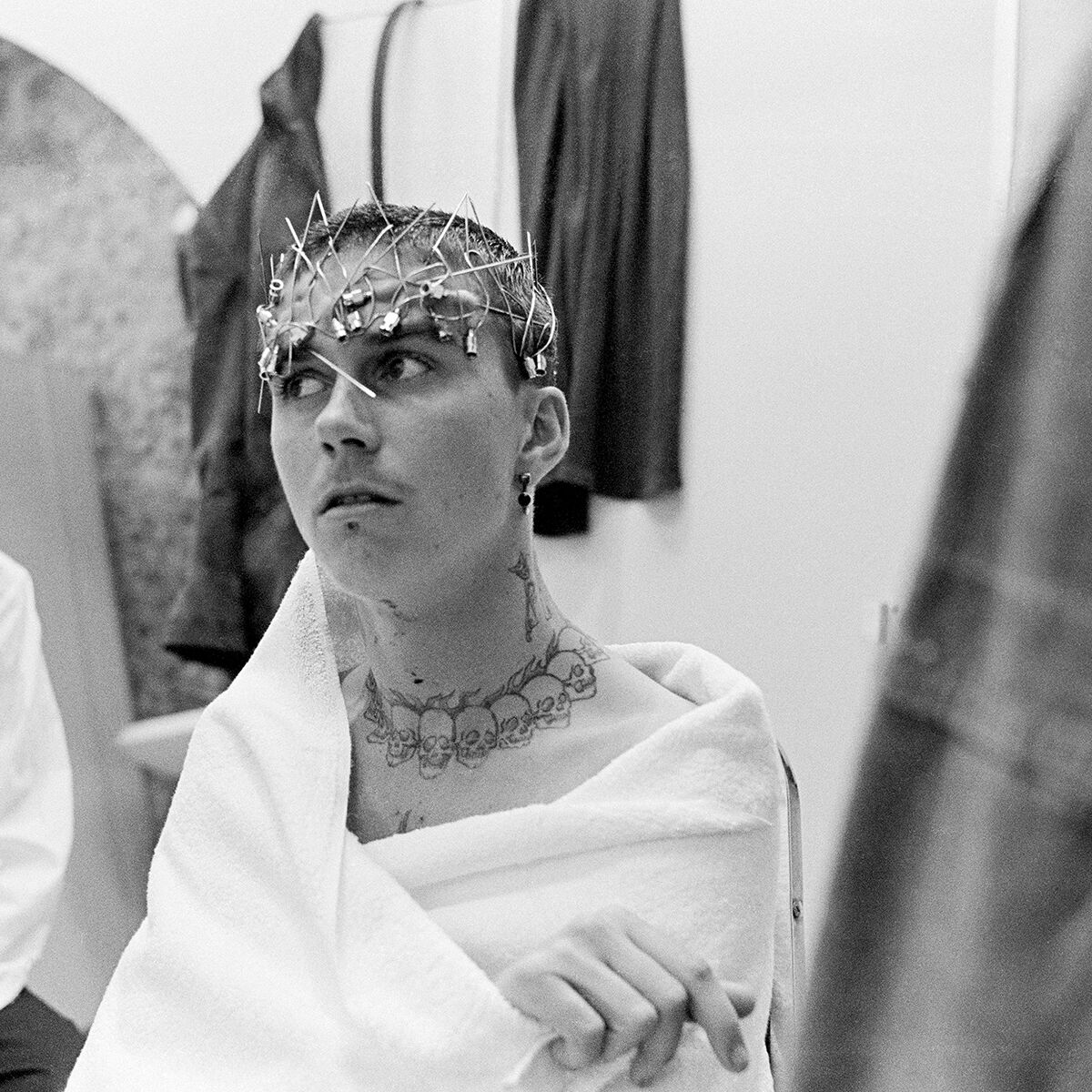 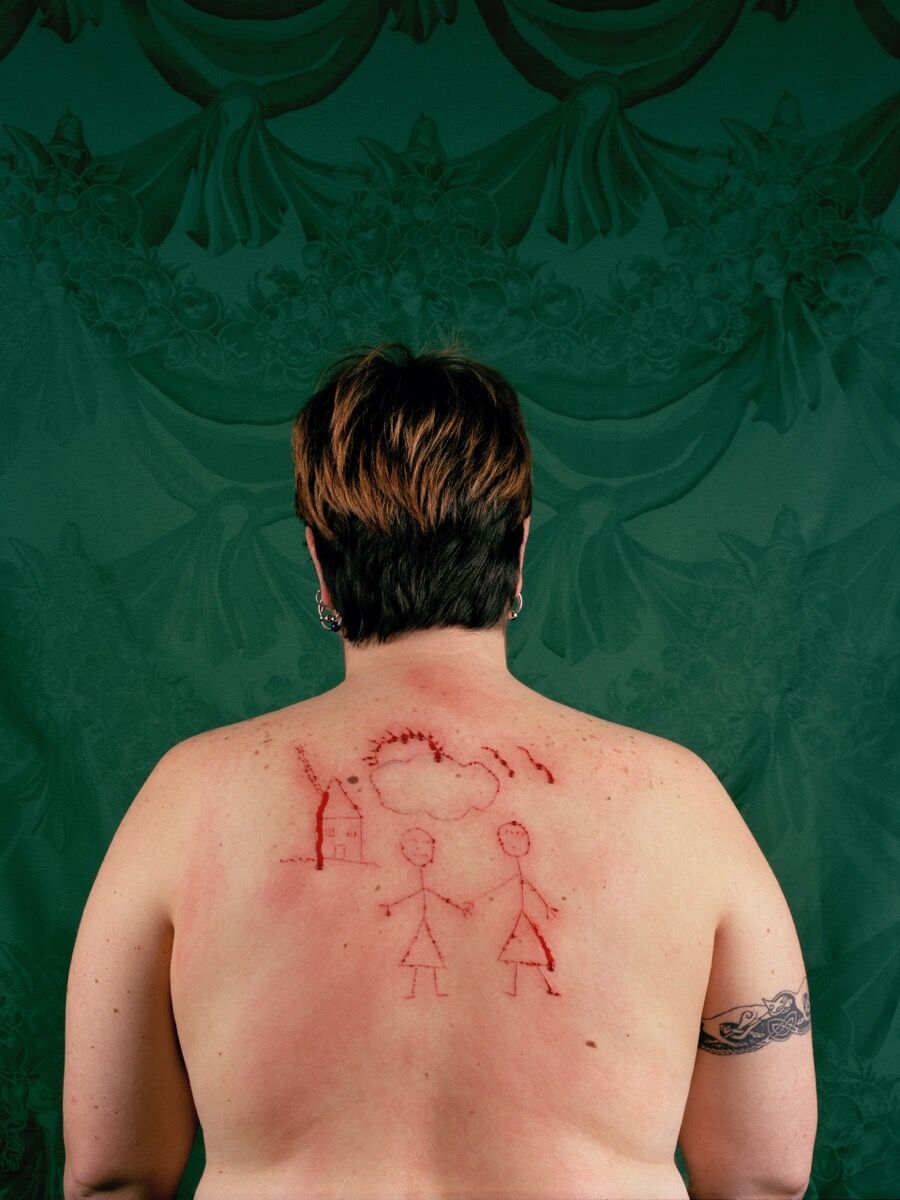 Advertisement
Opie has also employed Pig Pen as a frequent subject. She first shot them for Being and Having, in gender-bending disguise. A later black-and-white photograph from 1995 shows Pig Pen with a “crown of thorns”—a series of needles weaving in and out of their forehead. Wrapped in a white towel, gazing up and to the left, they appear innocent and, indeed, a bit holy (despite the skulls tattooed around their neck). A 2009 photograph, Pig Pen (Tattoos), focuses on their torso: The viewer can read the words “ambiguous” and “anomalous” permanently etched across their chest. Just below their nipples, two thin scars indicate a top surgery in their past—marks of a transition. “Pig Pen is ‘he,’ ‘she,’ and ‘they,’” Opie told me recently by phone. She was offering a simple notation for Pig Pen’s pronouns, I think, but nevertheless made her character and actor sound like some kind of divinity. 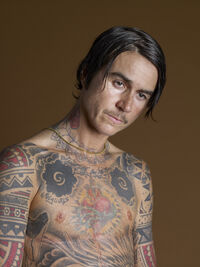 2 Images
View Slideshow
“The Modernist”puts Pig Pen front and center in a much more elaborate, cinematic way. In the film and photographs, their actions and surroundings reveal that they care about interiors and aesthetics. They buy flowers for a vase in their studio, where they keep a chic, glass-topped table; neatly stacked books; and various design objects. They don’t just want to burn down the gorgeous modernist buildings—they want to possess them, too. Desire, in part, motivates their destruction.
Pig Pen busies themself by looking in the mirror, lighting matches, and creating collages made from newspaper headlines about their crimes, decorated with hand-drawn orange flames. (From glimpsing the papers, we glean that they also probably burned down the homes of Larry Gagosian and Quincy Jones.) They alter the word “California” to “CaliBURNia,” referencing not only their own actions, but the recent wildfires that have ravaged the state, as well. Examples of these collages hang as prints throughout Lehmann Maupin, adding further layers of fiction and artifice to the show. (Stosh Fila made the collages with Opie’s guidance, and Opie photographed the results.) 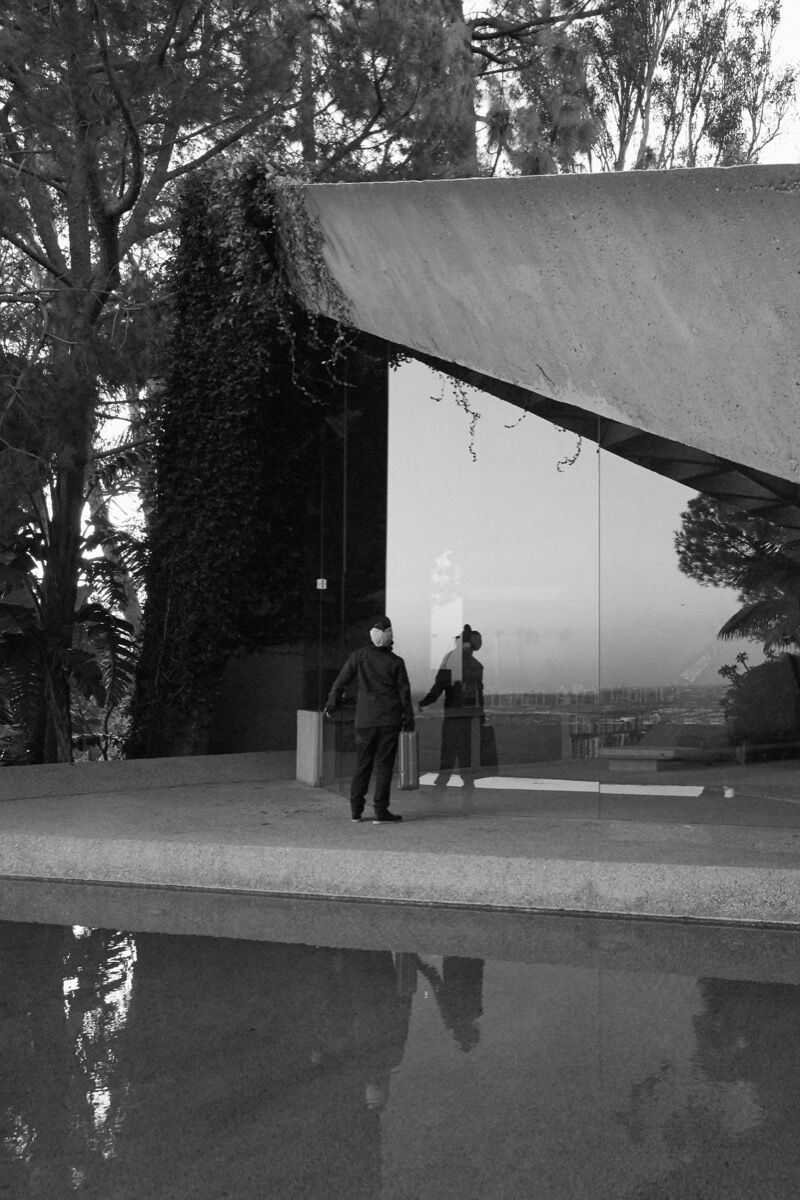 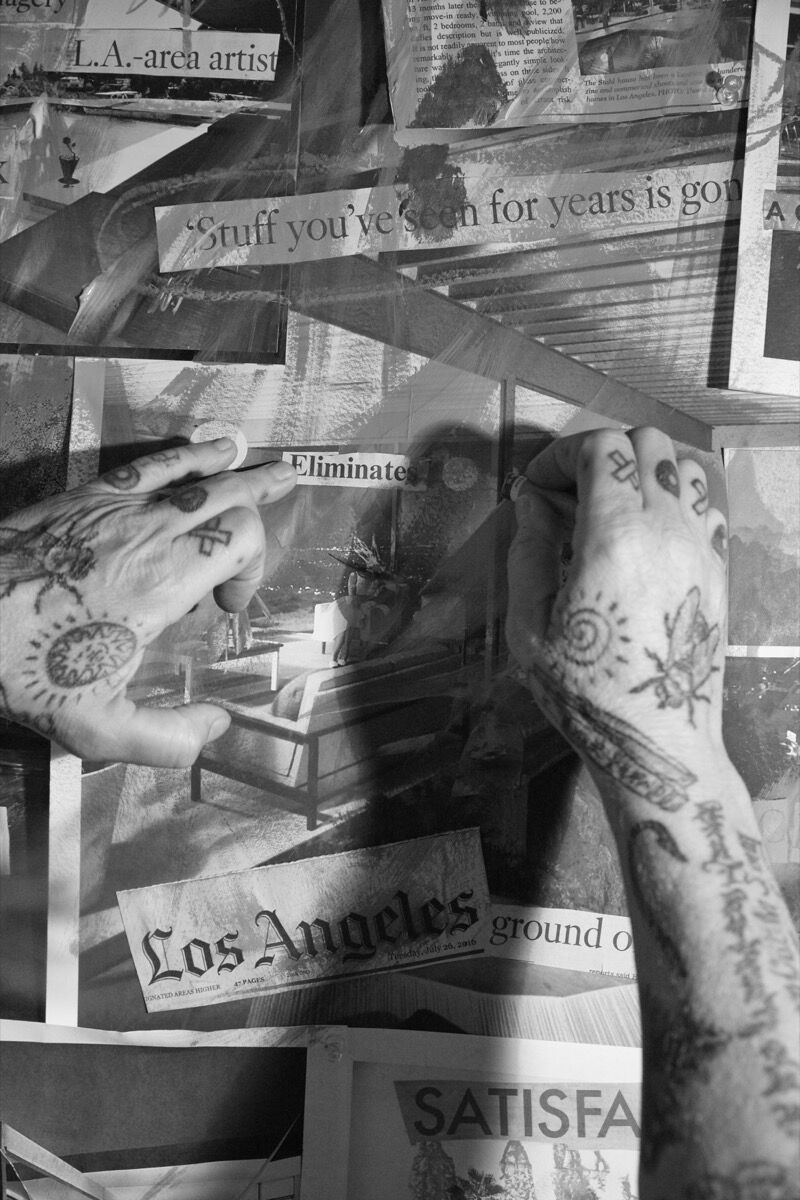 “I really like looking at Pig Pen,” Opie told me, comparing the character to a silent film star. This is an apt reference, given Opie’s interest in critiquing nostalgia. “Modernism, symbolically for me, is this longing for the past,” she said. Many of its famous proponents (
Rudolph Schindler
,
Mies van der Rohe
), she believes, moved from Europe to the United States and yearned for Old World ways.
Such a perspective, of course, ignores the realities of the past: namely, that it was worse for anyone who wasn’t a white man. Nostalgia is a springboard for nationalism and mantras such as “Make America Great Again.” Pig Pen is burning down structures that reflect such exclusive privilege. They’re also taking on a role—the lead actor in a noir crime film—that would have been denied them in decades past. Queer, tattooed, and badass, Pig Pen is ready for their close up. Opie is more than happy to oblige.
Alina Cohen
Related Stories

How to Take a Portrait, According to Photographer Catherine Opie 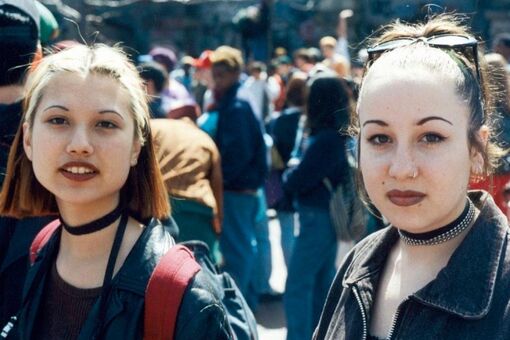 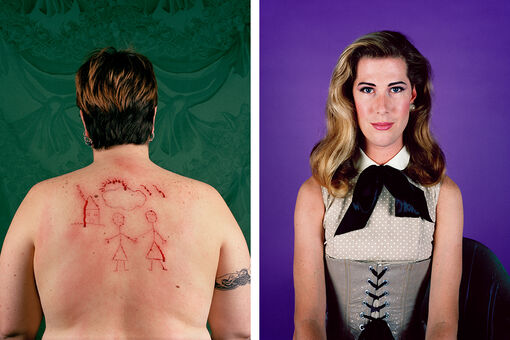 How to Take a Portrait, According to Photographer Catherine Opie
Charlotte Jansen
Oct 5, 2017