Censorship, “Sick Stuff,” and Rudy Giuliani’s Fight to Shut Down the Brooklyn Museum 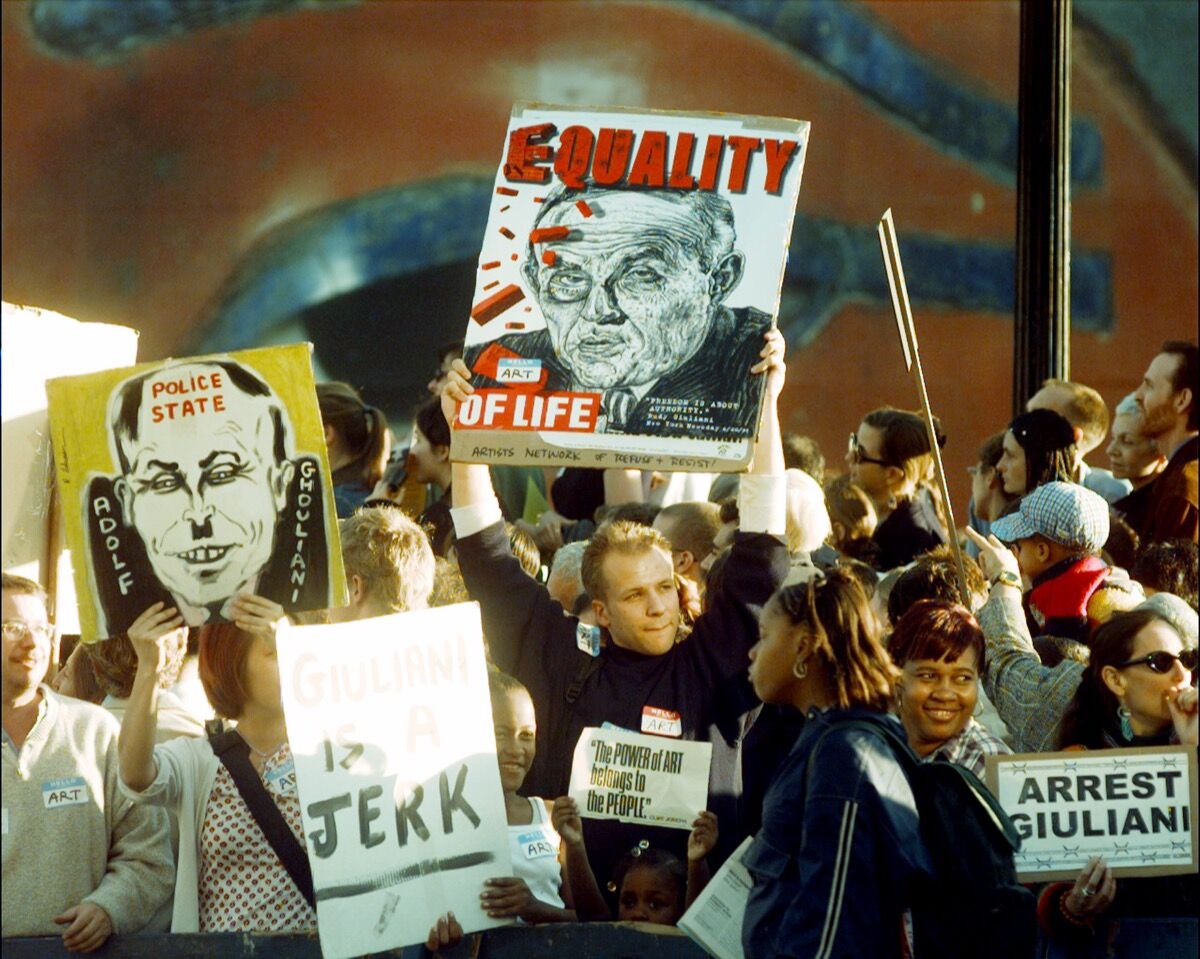 It began, as many great New York City controversies do, in the tabloids. On September 16th, 1999, the Daily News ran a little ditty (not even 600 words) headlined “B’Klyn Gallery of Horror. Gruesome Museum Show Stirs Controversy.” The exhibition in question, “Sensation: Young British Artists from the Saatchi Collection,” was described as a slasher flick—“R-rated” and brimming with “animals sliced in half, and graphic paintings and sculptures of corpses and sexually mutilated bodies.” Certainly not fit for the Brooklyn Museum, the paper implied, where it was due to open in a little under two weeks time. In defending the show, the museum’s director Arnold Lehman issued a warning to visitors that you would expect to find at a movie theater. And, ominously, Sunny Mindel, the press secretary of then-Mayor Rudy Giuliani, told the paper, “assuming the description of the exhibit is accurate, no money should be spent on it.”
The ensuing free-speech fight over “Sensation” would center around just that: whether the City of New York could cut off funding to the Brooklyn Museum over the controversial exhibition. The escalating battle threatened the literal existence of a major cultural institution in a way rarely seen since. On one side of the “Sensation” fight were Catholic groups and Giuliani, New York City’s pugilistic chief executive. On the other side of the battle was the Brooklyn Museum, which refused to call off the show, backed by legendary lawyer Floyd Abrams and the New York Civil Liberties Union. And in the middle of it all, a work of art:
Chris Ofili
’s The Holy Virgin Mary (1996), which plays off classical iconography, depicting Virgin Mary as a black woman made of elephant dung and set against a shimmering gold background replete with women’s buttocks cut from pornographic magazines.
What happened over the fall and winter months of 1999 is a timely reminder that civil liberties are not won or lost in perpetuity but rather constantly being challenged and negotiated. And it is artists, irreverent by accident or by design, who often test the limits of the law and public opinion in ways that place them on the periphery of such conflicts.

The Stage is Set

Even before it arrived in Brooklyn, “Sensation” came to be defined, not so much by the works on view, but by what angry members of the public hurled at those works in protest. Featuring provocative
Young British Artists (YBA)
like
Tracey Emin
,
Marcus Harvey
, and
Damien Hirst
and drawn from the collection of the equally controversial ad-man Charles Saatchi, the exhibition began at the Royal Academy of Art in London in 1997. It was controversial overseas. But in England, the objections primarily focused on a portrait of the infamous Moors Murderer, Myra Hindley, who along with her partner Ian Brady, killed five children in the Manchester area during the mid 1960s. For his 1995 painting Myra, Harvey recreated an iconic image of Hindley on a large scale, using casts of children’s hands, in a work critics called an attempt to make money out of the murders.
Writing in The Independent, arts correspondent Tamsin Blanchard captured the ensuing scene as the show opened: “First red and blue Indian ink, then an egg, were smuggled through the security cordons and hurled on to the controversial painting of Myra Hindley. Before that we had shattered glass, megaphones, placards, images of media manipulation, tears, confusion and bewilderment. And that was just in the courtyard.” Though police from London’s vice squad patrolled the exhibition, they found nothing illegal, a determination that Blanchard, attuned to the show’s desire to push the limits, called “a damning piece of art criticism.” The dawn of the contemporary blockbuster, “Sensation” became the highest attended contemporary art exhibit in Britain of the previous 50 years. And many visitors felt the protests and reaction were out of proportion to the work and its message—one that powerfully juxtaposed childish innocence with the face of a killer. A survey showed 90% who actually saw “Sensation” believed the RA had the authority to mount the exhibit.
In the leadup to the exhibition’s U.S. opening on October 2nd, 1999, the Brooklyn Museum wasn’t looking to soothe public opinion, running ads that said “be warned” in red capital letters. But court documents eventually revealed that Lehman informed the mayor about the exhibition over two months before it opened. Lehman received no objections at the time, though the mayor later charged the full scope of the exhibit wasn’t made clear. The museum may have briefed the mayor about “Sensation” no matter who held the office. After all, the city provided significant funding and leased the building to the institution. But Giuliani perhaps warranted particular care since, after his election in 1993 on a platform of law and order and quality of life, the mayor was no stranger to impinging on the first amendment, to the displeasure of artists.
In the 1990s, such free speech fights were the “heart and soul” of the ACLU, recalls Norman Siegel, the former executive director of the civil liberties union’s New York branch. “I was shocked when I heard Giuliani was going to run for mayor because my recollection of Rudy Giuliani was that he was not a people person,” Siegel told me of the man who was also his classmate at NYU law school. Before leaving the NYCLU in 2001, Siegel kept a scorecard of first amendment cases brought during the subsequent mayoralties of Ed Koch, David Dinkins, and Giuliani. As Siegel remembers it, the NYCLU brought and won the most free speech cases under Giuliani. An American Bar Association article described how “law professors in New York (and elsewhere) have been thanking Mayor Rudolph Giuliani for ‘constantly generating classroom hypotheticals’ for teaching the First Amendment.” But still, controversial works of culture, even those dealing with the Catholic faith to which Giuliani subscribed, had passed without much in the way of real scorn from the mayor. “Sensation” might have been among them.
But then, on September 22nd, Rudy Giuliani held a press conference. 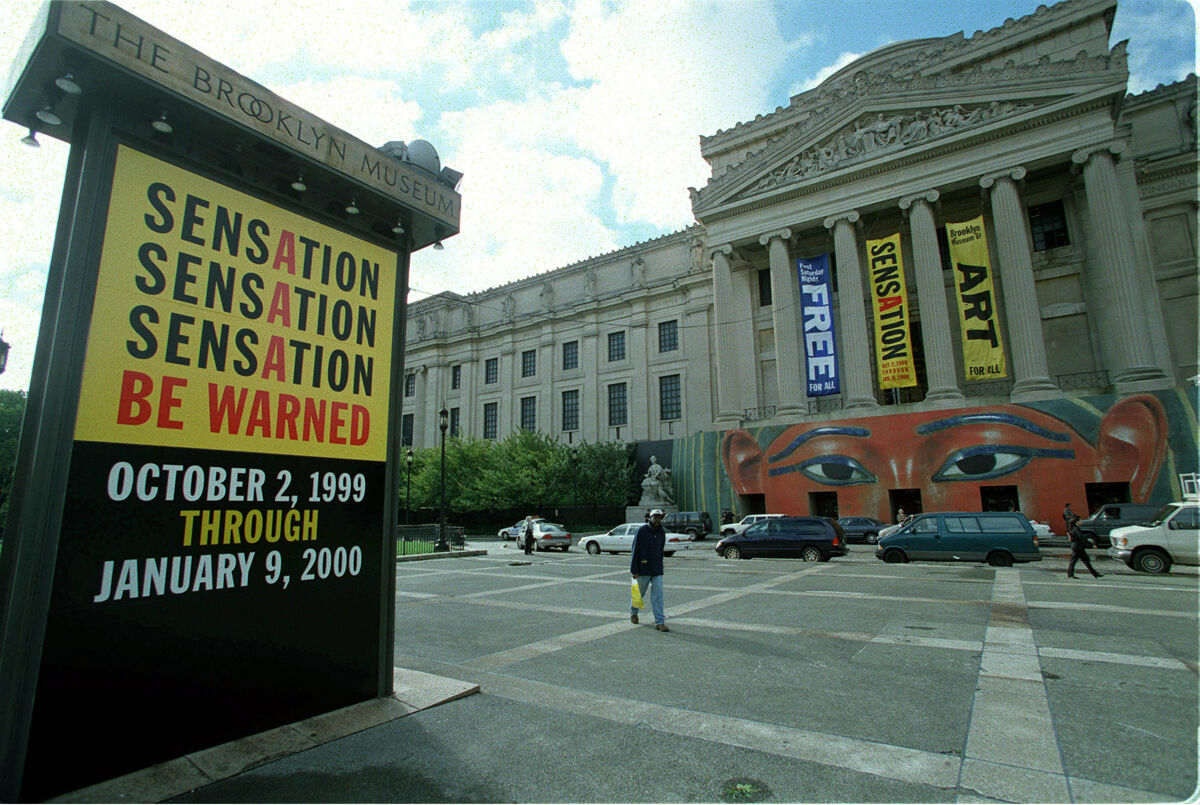 On November 1, Federal Judge Nina Gershon delivered a 40 page opinion. In it, she ruled that the Brooklyn Museum had a high likelihood of prevailing if the case continued to trial. Gershon went further, issuing an injunction forbidding the city from withholding any more funding, evicting the museum, or replacing the board of trustees. The first amendment, she ruled, barred the government from using funding as means to coerce speech. It was a sweeping victory for the Brooklyn Museum. “The Judge is totally out of control,” Giuliani said in response to the verdict. But in March, bluster gave way to resolution. The parties settled out of court, with both sides paying their own legal fees and agreeing that the museum would be safe from future acts of retaliation from the city.
Today, over 15 years later, the impact of the decision can still be felt. “I think the notoriety of the Brooklyn Museum case has served as a significant protector for the arts thereafter,” Abrams said. He pointed to an exhibition of classified NSA materials shown as part of Laura Poitras’ Whitney exhibition in February and March of 2016. “No one even talked about the possibility of prosecution of the Whitney,” he said. “It’s like the Sherlock Holmes story about the dog who didn’t bark. The fact that there was not even a public discussion about whether [the Whitney] was at risk or should be prosecuted is telling about the degree to which the first amendment has come to play a continuing role in the protection of the arts.” Granted, who knows what might have happened if someone other than Barack Obama was living in the White House.
Even when artists win these lawsuits, they can have a chilling effect on the work people make or what institutions choose to show. Such self-censorship is “one of my goals,” said Donohue, who doesn’t want the government censoring exhibition. Donohue said that he will continue to protest those he finds offensive in hopes artists voluntarily avoid such subjects in the future. Still, a Chris Ofili retrospective at the New Museum in 2014 proved not only that museums were not afraid, but also reminded viewers that his output amounted to more than one work, in one exhibition, over a decade ago. “We thought that it was also important to show the impressive range of his work, from the work he’s more well known for—the extremely intricate and ornate paintings that he made in the ’90s—to the subtle blue paintings and vibrant and expressive recent paintings that he’s been [making] since his move to Trinidad in 2005,” Margot Norton, one of the New Museum curators told Artsy in 2014.
“Sensation” continues to provoke debate. It was evidence that spectacle could get visitors into the gallery. And the personal benefit Saatchi received from a museum show of his collection—which was also partially sponsored by Christie’s—continues to be controversial as the art world continually privatizes. (Many remain critical of corporate sponsorship of public museums.) Even though the Brooklyn Museum case was a resounding victory for the museum, the culture wars of the 1970s and 1980s ended with an obscenity law firmly intact and a National Endowment for the Arts that has seen funding gutted and relevance diminished. And even with legal protections, those most vulnerable to government interference are the artists and institutions which lack the resources or public pull to defend themselves in court.
The presidential election results have many taking stock of past victories and future controversies. It seems reasonable to think that at some point over the next four years, a work of art could again find itself in the government’s crosshairs. “While it’s not predictable where challenges are likely to arise in the next four or eight years, it is predictable that there will be challenges to the arts generally, to museums particularly,” Abrams said. Thinking about the future, Siegel looks back to the past, on his experience in the civil-rights era South, working with black and white activists and lawyers. “They always taught me that you have to fight back,” he told me. “You have got to to try to win, but sometimes just fighting back is empowering. And you can’t be silent.”
Isaac Kaplan is an Associate Editor at Artsy.
Related Stories