The Centuries-Old Japanese Tradition of Mending Broken Ceramics with Gold 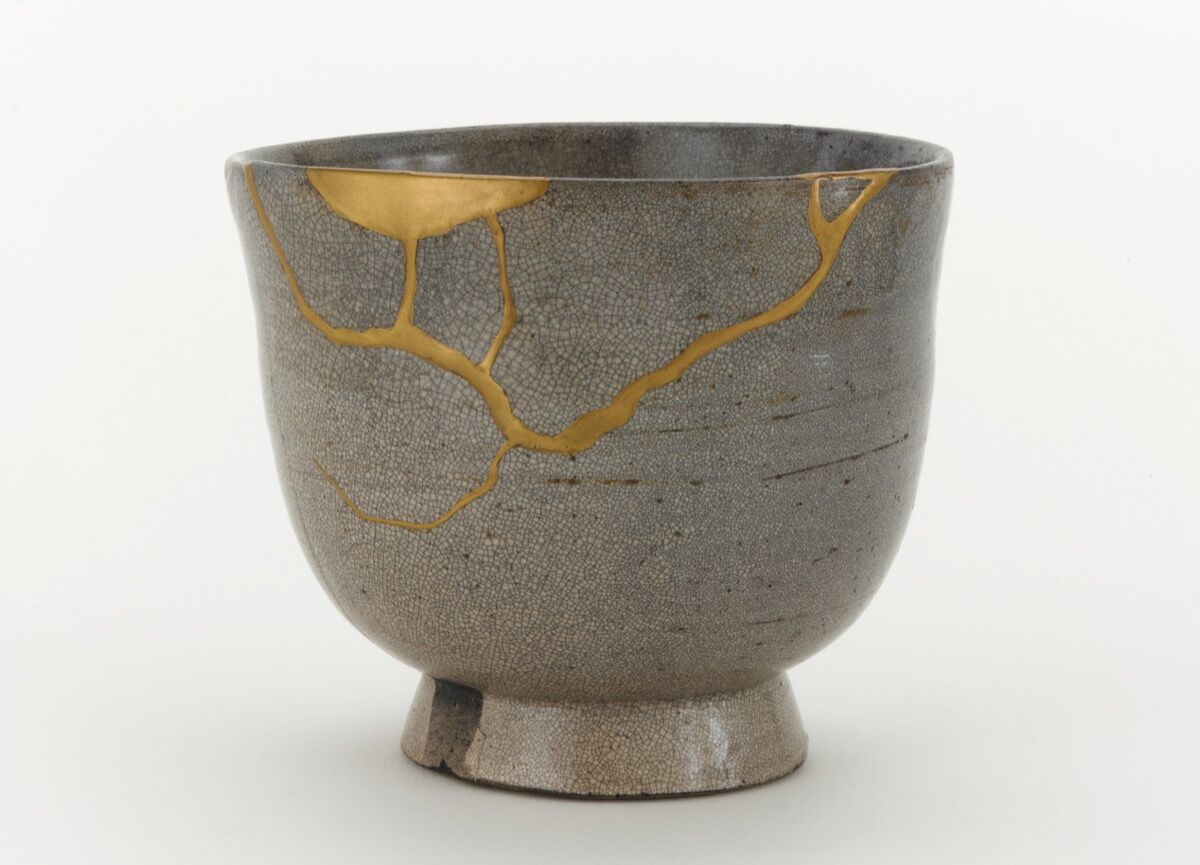 Some four or five centuries ago in Japan, a lavish technique emerged for repairing broken ceramics. Artisans began using lacquer and gold pigment to put shattered vessels back together. This tradition, known as kintsugi, meaning “golden seams” (or kintsukuroi, “golden repair”), is still going strong.
Recent international enthusiasm for kintsugi may well be due to the ongoing fervor for ceramics, aided in part by the accessibility of communal clay studios, a crop of contemporary artists taking on the medium in innovative ways, and a widespread thirst for hand-crafted objects. But the technique itself—traditionally performed by lacquer masters, though it’s been adopted by ceramicists in modern times—has drummed up interest all its own. Not only has kintsugi been adopted and adapted by leading contemporary artists, these days, one can take kintsugi lessons and find self-help and wellness books that use it as a metaphor for embracing flaws and imperfections. In the beginning, however, kintsugi was just a practical—albeit beautiful—means of repair.
The origins of kintsugi are uncertain, but it’s likely that the practice became commonplace in Japan during the late 16th or early 17th centuries, noted Louise Cort, curator of ceramics at the Smithsonian’s Freer Gallery of Art and Arthur M. Sackler Gallery in Washington, D.C. Its beginnings are often associated with the famed tale of a 15th-century Japanese military ruler whose antique Chinese celadon-glazed bowl had broken. The story goes that he sent the bowl back to China for a replacement. He was told that the piece was so rare, there wasn’t another one like it. The Chinese sent back the original bowl, repaired with metal staples (as was the Chinese fashion).
Through this story, Cort explained, we can infer that gold lacquer repairs weren’t yet being performed in the 15th century. It’s more likely that the tradition began in time with the rise of tea bowls—vessels used in traditional Japanese tea ceremonies, which flourished in the 16th century. Kintsugi’s international reach is a modern phenomenon; it was historically only practiced in Japan, though the technique was used on imported ceramics from other parts of Asia, particularly China and Korea. 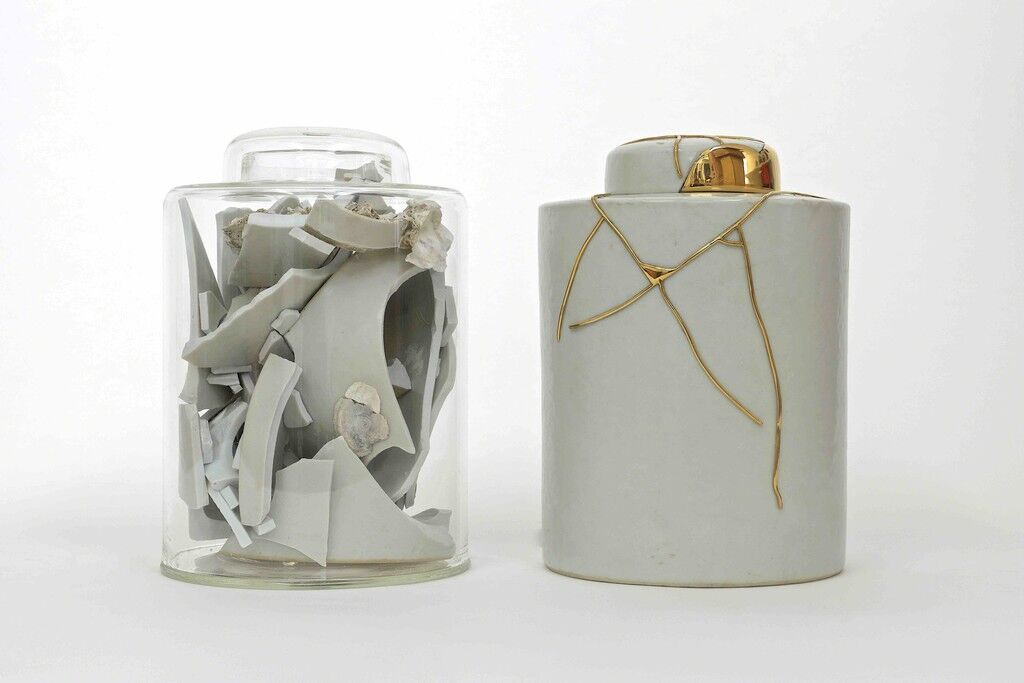 Bouke de Vries
Marine memory vessels, 2016
Galerie Ron Mandos
The first known reference to kintsugi, Cort offered, concerns a 17th-century Japanese warrior who was closely associated with fashionable tea drinking ceremonies of his day. “He was accused of influencing the market for tea bowls by buying boring, plain old bowls, breaking them, having them repaired with kintsugi, and earning good money for them,” Cort explained.
“That seems to indicate that, by the beginning of the 17th century, kintsugi was a commonly used technique for repairing—and at the same time, ornamenting—ceramics for tea,” she added. This was especially true of tea bowls, “which seem to have dropped with a fair amount of frequency,” she laughed. (As further proof, the Freer | Sackler’s esteemed Asian ceramics collection includes many a tea bowl mended with kintsugi.)
The artisans who would mend these broken tea bowls, as well as other ceramic vessels used in tea ceremonies, were Japanese lacquer masters who were trained in various techniques of the lacquer arts. In addition to kintsugi, their skills may have included maki-e, a technique for painting fine gold or silver florals and landscapes onto decorative objects, as well as crafting lacquer trays, boxes, and other designs.
Traditionally, the kintsugi process calls for a Japanese lacquer known as urushi, which is made from tree sap. This material has been used for some 9,000 years by Japanese lacquer masters as a glue, putty, or paint, explained Gen Saratani, a third-generation Japanese lacquer restorer and artist who now works in New York.
The traditional kintsugi method, Saratani said, begins by using the lacquer to glue the ceramic pieces back together. The lacquer is also used as a putty to fill in any gaps or holes where chips from the original vessel might be missing. This mending is the most difficult part, he explained, because the lacquer cannot be removed once it’s dry, and the pieces must be put into place all at once, even if there are 20 different parts. 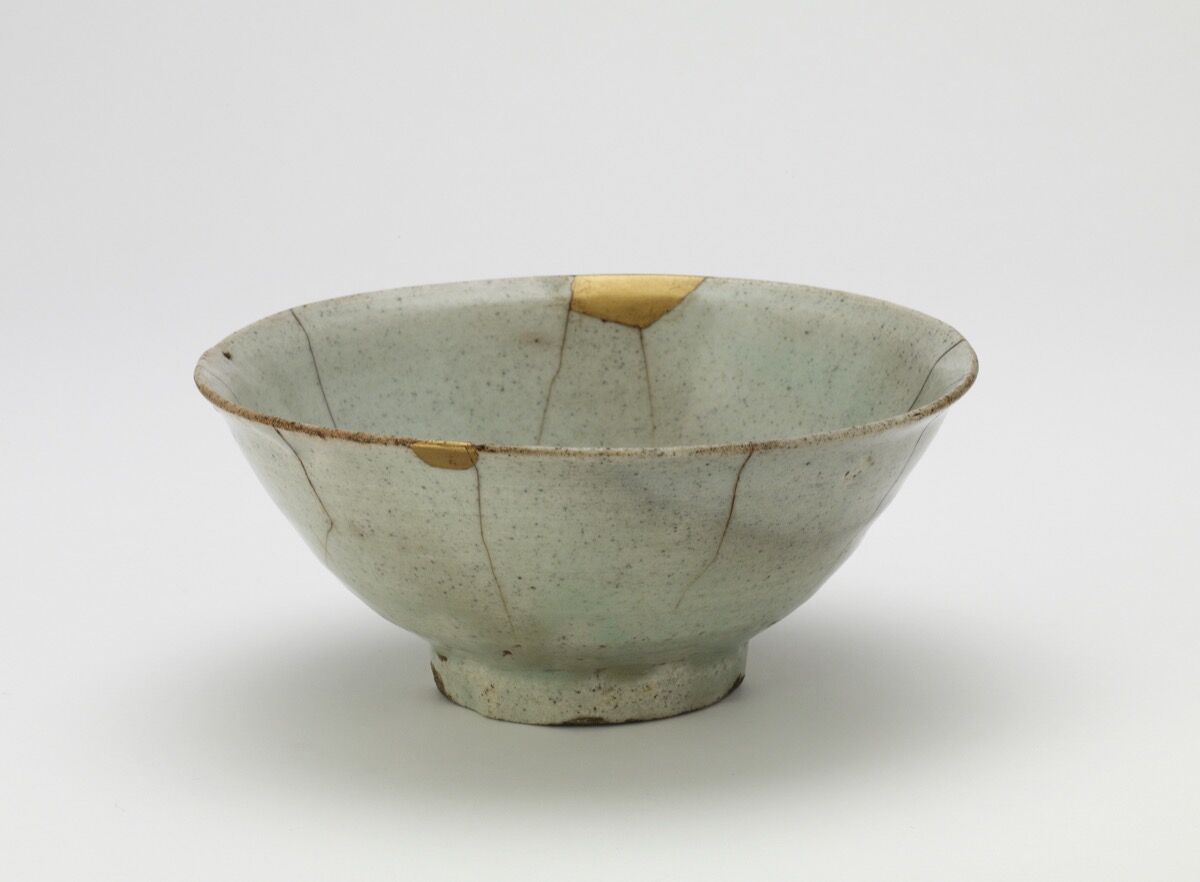 Advertisement
Then, the lacquer must dry and harden—a process that can take weeks—before it is sanded down to lie flush with the rest of the vessel. Finally, the lacquer master will paint over the lacquer seams with gold. It’s a common misconception, Saratani noted, that the entire mending process is done with gold; it’s really just the surface. At times, Cort added, a piece might have been mended with silver for aesthetic purposes, but gold has long been preferred because it does not tarnish and is food-safe.
Saratani, who moved to New York to be a restorer in 2012, takes kintsugi commissions from clients, working with a range of metals beyond gold and silver, including platinum and copper. His repairs, depending on the difficulty, can run anywhere from $50 to $2,500 for a single piece, and can take several months to complete. 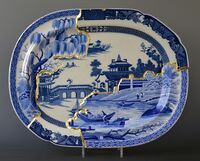 3 Images
View Slideshow
Now in his late thirties, Saratani learned the lacquer arts from his father around 25 years ago. Although he’s found that kintsugi has been rather popular recently, both in the U.S. and Japan, he estimates that there are few lacquer masters working today, given that it takes over a decade of training. Saratani receives so many requests for kintsugi repairs that he can’t accept them all, and a few years ago, he decided to begin teaching the technique to others. He regularly gives classes out of his New York studio, and his students generally either have something broken that they want to repair, or are simply curious to learn.
This process of mending has been inspirational for contemporary artists, as well (though few employ the traditional technique and materials). Notable among them are the Korean sculptor
Yeesookyung
, who creates impressive undulating sculptures from pieces of found dishes. British artist
Paul Scott
also uses the technique to combine (or, in his words, “collage”) distinct pieces of found ceramics.
Scott learned about kintsugi through his interest in repair and mending, which traces back to working at the Knossos archaeological site in Crete in the early 1980s. Later, he taught himself a modern version of kintsugi, and it’s now an integral part of his practice. He uses it to fuse antique ceramic plates of various origins—including Staffordshire transferware, pearlware, ironstone, and porcelain—which are covered in blue-and-white designs and landscapes. “Recent works have used the gold line [of kintsugi] to travel across artworks in gallery installations,” Scott explained. 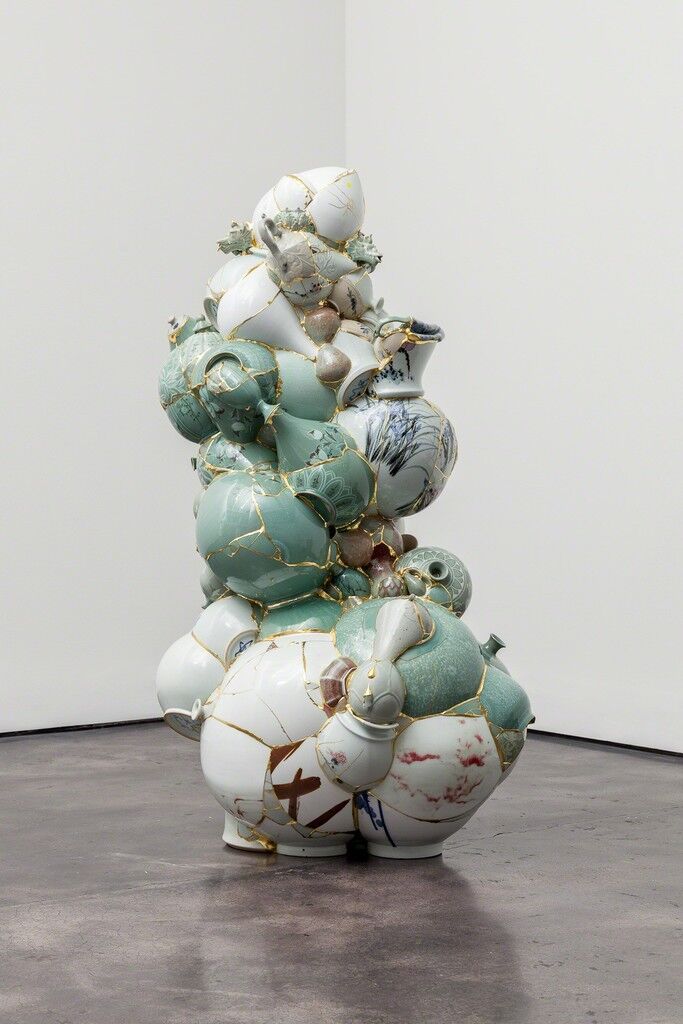 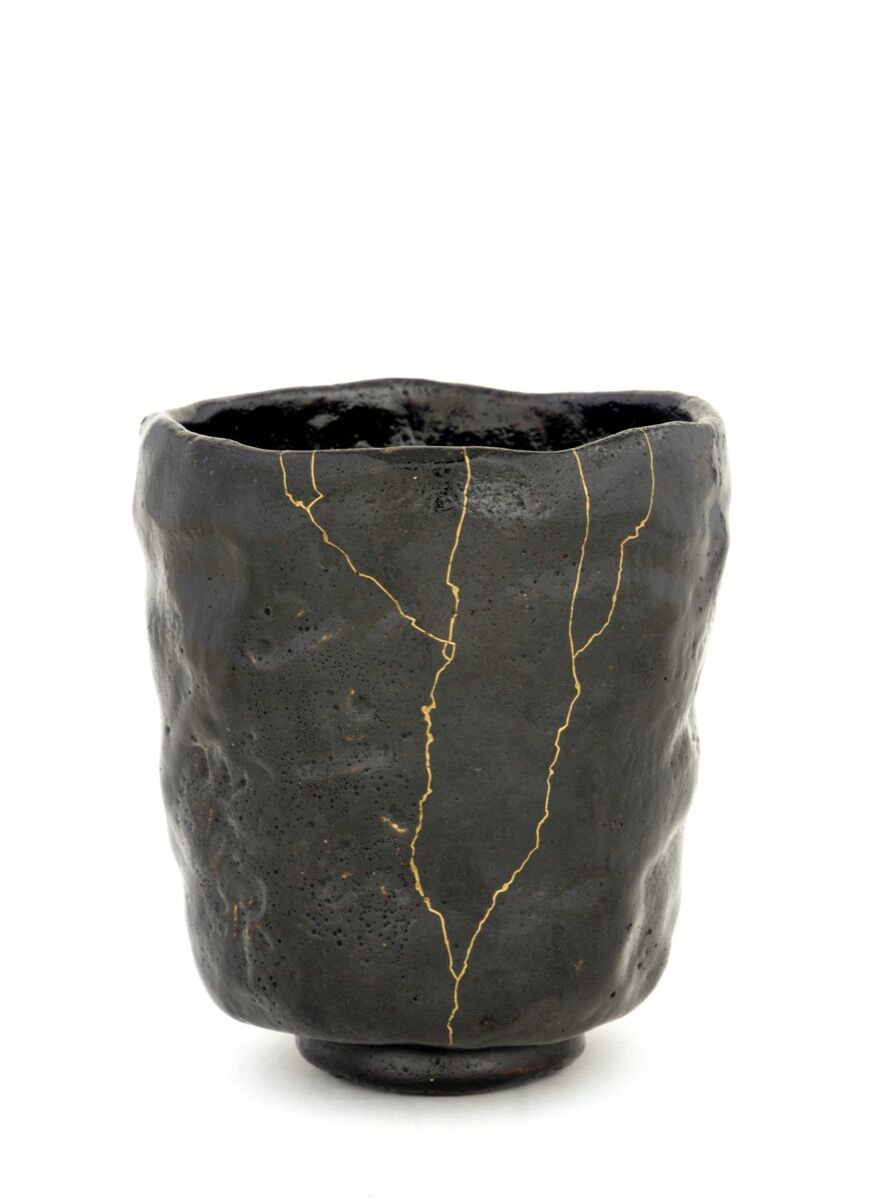 Striking, too, are the works of the Dutch-born, London-based artist
Bouke de Vries
, who first encountered the technique while studying to become a ceramics restorer some three decades ago. While he initially learned a variation on traditional kintsugi, he’s since become proficient in the original process from a Japanese lacquer specialist.
“I use the technique as a away to enhance a particular piece I’m working on,” de Vries explained. “The amazing thing about kintsugi is its durability; whereas other forms of restoration deteriorate, it can often lift a piece.” He’s used the technique in various ways, such as mending early Chinese pottery and building elaborate sculptures of birds and flowers from found pieces of ceramics. But he’s also interpreted it conceptually, for example, in pieces that are held together by gold sellotape, “which references both the kintsugi and our modern way of holding something together,” he said.
Ultimately, the modern-day fascination with kintsugi may have most to do with its associations with the Japanese philosophy of wabi—a historical term that dates back to the 16th century, which describes the beauty of imperfections.
Cort points out that, while there’s no documentary or textual evidence about how people thought about kintsugi in the 16th and 17th centuries, “it can be imagined that it was part and parcel of this interest in imperfections, flaws, and accidents,” she explained. “Especially in the contrast between the actual fact of the break and the use of this very precious material to emphasize the repair, it is in keeping with the kind of universal ideas that wabi points to.”
While kintsugi has endured and fascinated for centuries, its longevity may be due to its tender embrace of accidents and mistakes.
Casey Lesser is Artsy’s Lead Editor, Contemporary Art and Creativity.
Related Stories

What Is Ikebana? The Japanese Art That’s Making a Comeback 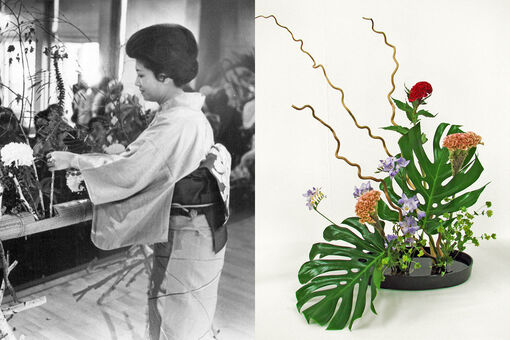 What Is Ikebana? The Japanese Art That’s Making a Comeback
Natalie Cenci
Mar 21, 2018 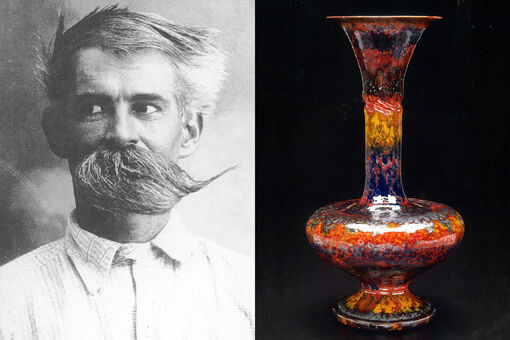 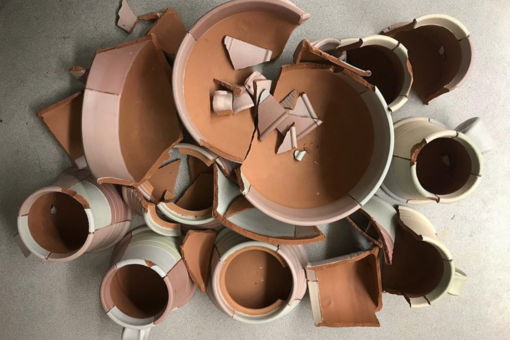 Why Ceramic Artists Are So Good at Dealing with Failure
Casey Lesser
Jan 9, 2018