Over a Century Ago, This New Orleans Pottery School Launched a Generation of Female Ceramicists In the history of America, New Orleans has more to offer than music, cocktails, cuisine, and corruption. The pioneering female potters of Newcomb College—America’s first degree-granting coordinate college for women, founded in 1886—are testaments to the South’s lesser-known contributions to women’s education and art.
But before postbellum New Orleans redefined American pottery, it had to recover from the war and the tumultuous years of the Reconstruction era, which came to a close in 1877. After the Civil War, the city was, like much of the South, in utter disarray. Though it was a triumph in human terms, emancipation had disrupted the plantation-based system, leaving a messy economy complicated by the fact that a large percentage of the male workforce had died in war.
“The region as a whole lagged greatly behind the Northern states in education and the economy,” says Tom Friel of the Newcomb Art Museum of Tulane University. With the slave economy abolished, many prominent New Orleanians saw a new model of industrialization as the only way forward. So in 1884, the city launched the World’s Industrial and Cotton Centennial Exposition, a grand attempt to prove to America and the world that New Orleans was ready to move forward politically and economically in the Union.
Influenced by movements in the North and over the pond in England, rumblings of female empowerment could be felt across New Orleans, but the Women’s Department in the 1884–85 exposition was a big step forward for the South. Headed by Julia Ward Howe, herself a Northerner, the Women’s Department showcased arts, crafts, patents, and intellectual contributions from women around the country.
“Accessibility to accomplished Northern women…helped women of New Orleans cross the threshold from old standards to modern ideas,” writes Ellen Paul Denker in the catalogue for the 2013 exhibition “Women, Art, and Social Change: The Newcomb Pottery Enterprise.” 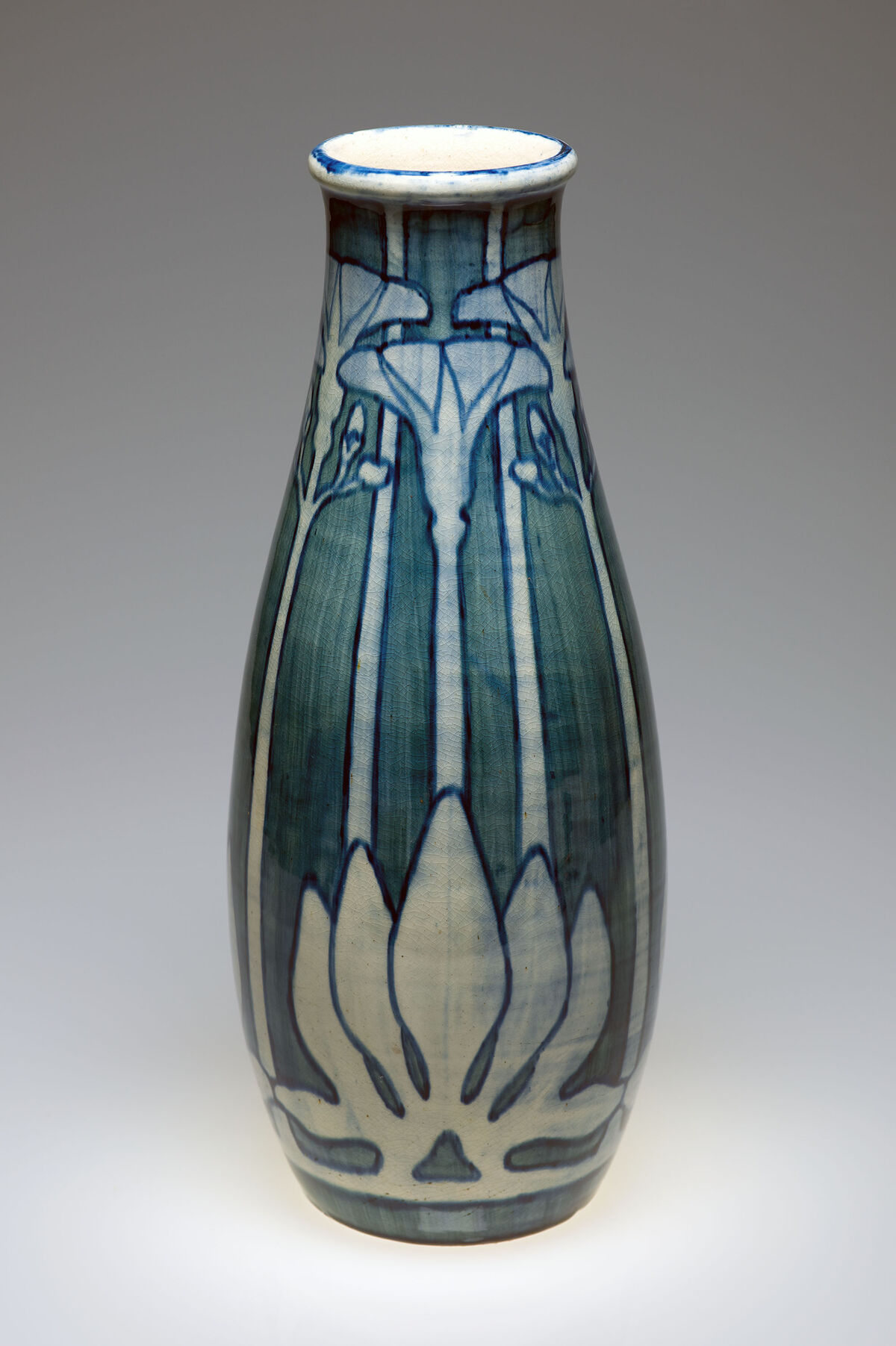 What they were witnessing, she writes, was the so-called New Woman. “She was slim, athletic, wore shirtwaists and rode a bicycle. She was also educated and not afraid to say what was on her mind. She wanted to participate in her community through suffrage and philanthropic organizations.” Perhaps most importantly, Denker adds, “she had greater freedom of choice and lifestyle—that is, a woman no longer needed to live in the shadow of a husband.”
Crucially, the exhibition also offered arts and crafts classes for these New Women of New Orleans, many of whom had forgone schooling for marriage and homemaking. A few of their teachers—namely Ellsworth Woodward and his brother William, both graduates of the Rhode Island School of Design—went on to play key roles in what was to come.
Soon after the exposition, in 1886, Josephine Louise Le Monnier Newcomb, widow to a successful businessman, founded H. Sophie Newcomb Memorial College as a tribute to her daughter, who had died at age 15. It was one of the country’s earliest degree-granting schools for women, in partnership with Tulane University. Newcomb wanted the school to give women a practical education, one that would help them develop industrial and artistic skills and real-world training that could put them on the road to financial independence—a benefit to themselves and the postbellum South.
Ellsworth Woodward was named director of the Newcomb Art School, and the Newcomb Pottery enterprise—a for-profit offshoot of the school—began in earnest in 1895, after Woodward recruited Mary Sheerer to oversee pottery decoration.
Newcomb’s female creatives were strikingly at odds with the idea of the dainty Southern belle. According to Adrienne Spinozzi, another contributor to the “Women, Art, and Social Change” catalogue, “There were young students earnestly pursuing work in a burgeoning field, married women who viewed decorating pottery as an artistic pastime, and trained artists seeking to secure paying work to fulfill their professional aspirations.” 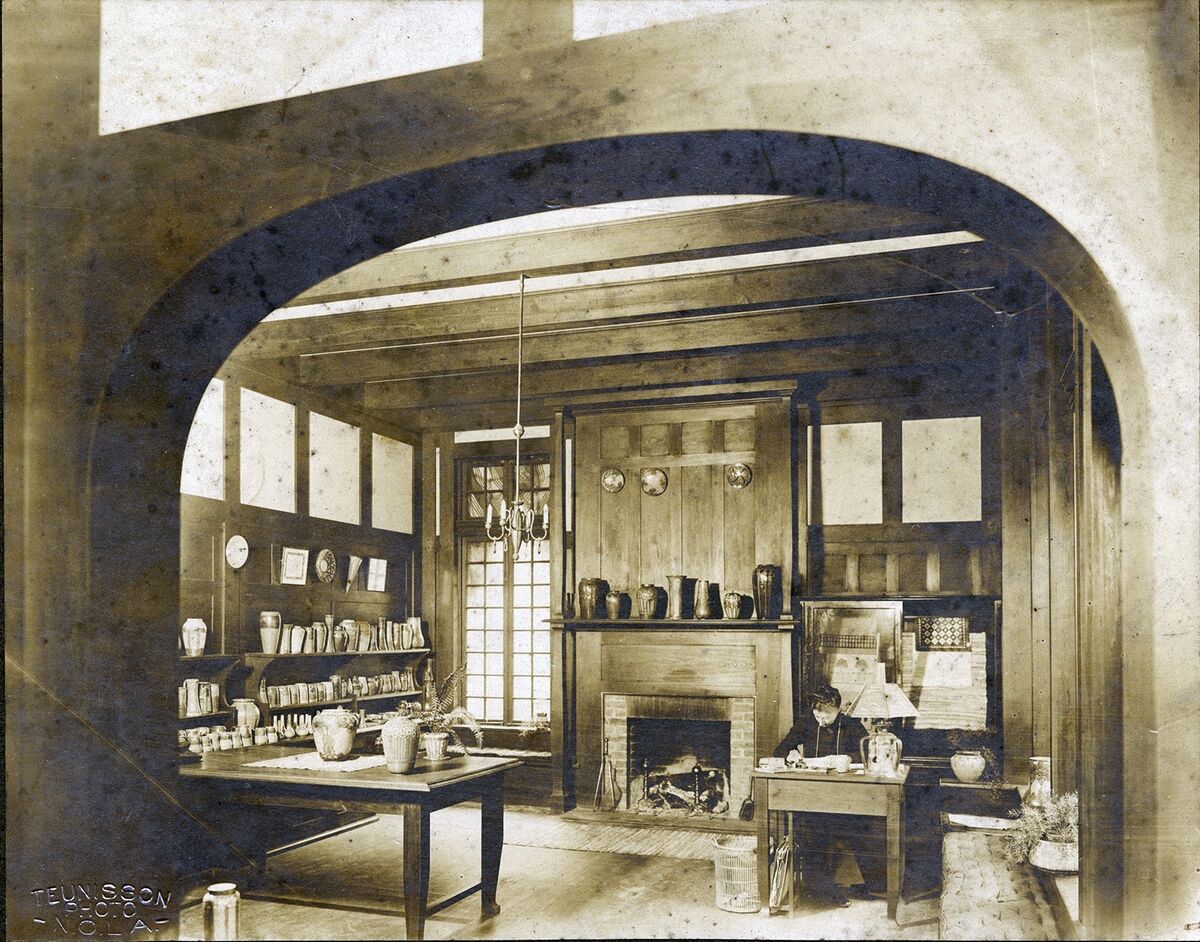 Advertisement
The initiative was closely tied to the environment of the South. “The whole thing was to be a Southern product, made of Southern clays, by Southern artists, decorated with Southern subjects,” Sheerer wrote in the 2010 book Makers: A History of American Studio Craft. Indeed, Newcomb Pottery typically depicted quintessential New Orleans flora and fauna—magnolias, wisteria, cranes, daffodils—in local clay collected on the shores of Lake Pontchartrain.
Within a few years, as the pottery enterprise gained national and international renown with shows in Paris, New York, Virginia, and San Francisco, sales increased dramatically and interest in the classes grew. The school even had to erect a new building dedicated solely to ceramics.
The designs and compositions continued to evolve as the artisans experimented with new colors and clay formulations. In 1925, Sheerer attended the International Exposition of Modern Industrial and Decorative Arts in Paris, bringing back with her various
Art Deco
elements that crept into her students’ new, more abstract designs.
Still, the best-selling pottery designs usually called for references to the Gulf South that appealed to the buying public. Many of the decorators grew tired of rendering romantic motifs of moonlit moss, not to mention the meager pay. Noting the long hours, lack of prospects, and “narrow style of design,” at least one of the decorators, Sabina Wells, threatened “open rebellion.”
And innovative though the Newcomb mission was, it was nevertheless curtailed by racism and gender bias: Only white women were accepted into the school, and it was men who primarily threw the clay. As Friel says, those were simply the times, especially in the South. Co-education was “socially inappropriate,” so the college stood separate from Tulane. “Initially, women were only to conceive and execute the designs and not partake in the ‘man’s work’ of preparing, throwing, and firing the clay,” he says. 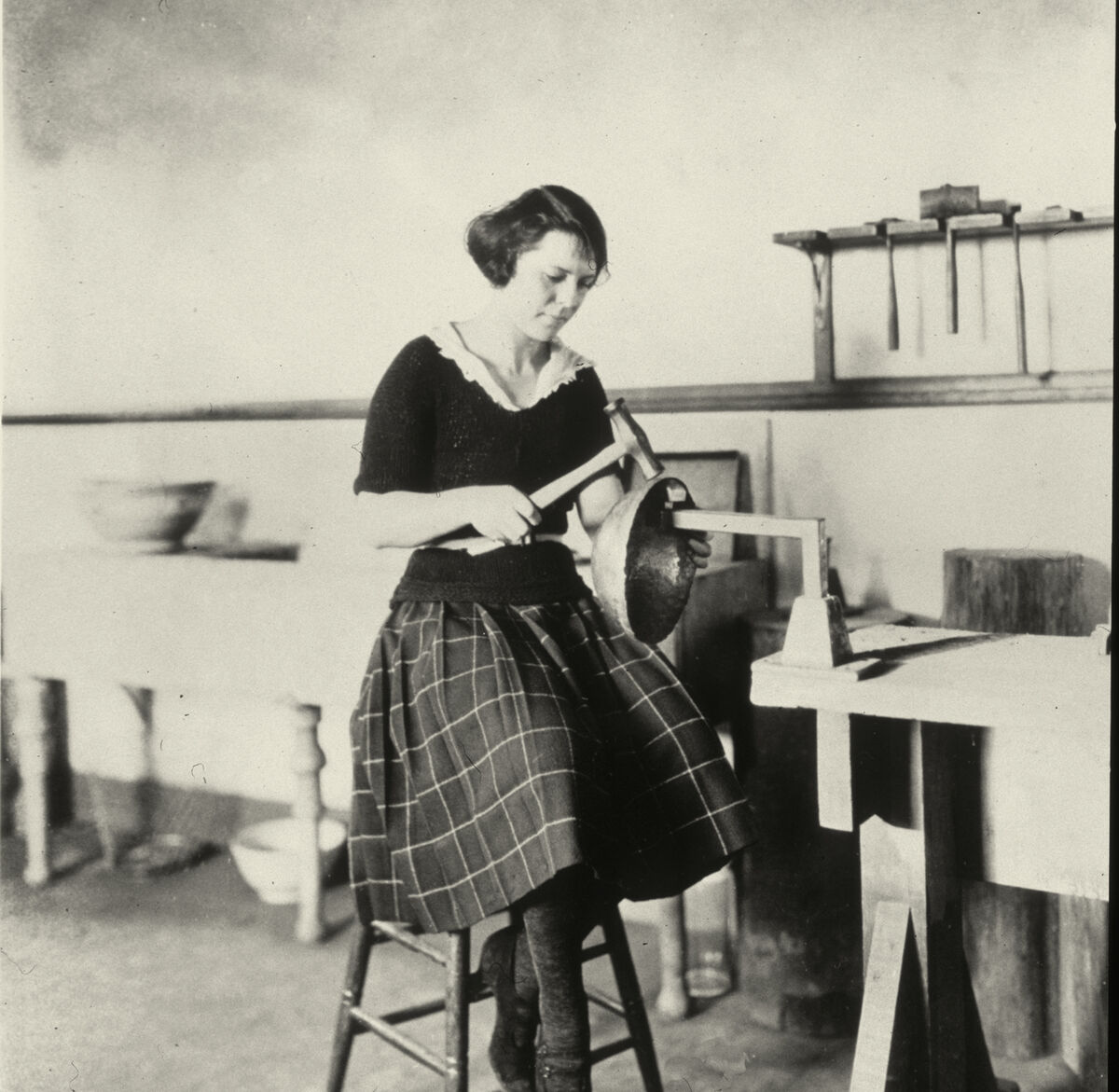 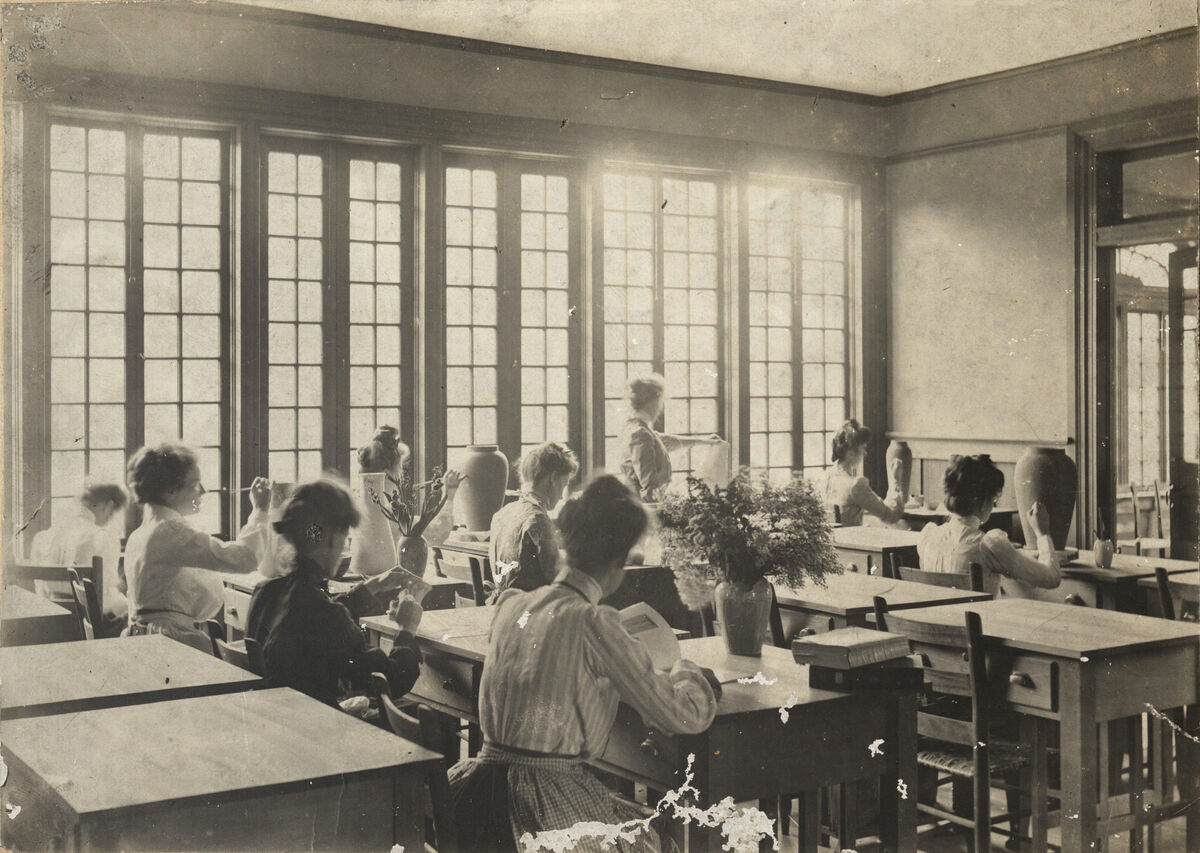 Eventually, as opportunities for women in art and business arose outside of the enterprise model, school attendance fell. The pricing model, which had always been problematic, led to dwindling profits, and the Great Depression didn’t help. In 1931, Ellsworth Woodward and Mary Sheerer retired after serving Newcomb for 44 years and 37 years, respectively.
Newcomb Pottery closed in 1940. Despite a brief revival by the Newcomb Guild, the enterprise was more or less done. In 2005, Hurricane Katrina redefined the city yet again, this time in more destructive terms. Tulane’s renewal plan called for the complete closure of Newcomb College, its last gasp coming in 2006.
But the legacy of the enterprise survives: In Newcomb Pottery’s 45 years of existence, it is estimated that more than 70,000 pieces were created, with contributions from 70 to 100 women.
“A business had to be founded,” Ellsworth Woodward said in 1893, as if it were preordained. That business, he said, “should exhibit an object lesson as to the possibilities underlying native raw materials when trained talent”—finally, the New Woman—“takes it in hand and stamps it for beauty and use.”
Ryan Leahey
Related Stories