Challenging America’s Most Iconic (and Controversial) Photographer of Native Americans 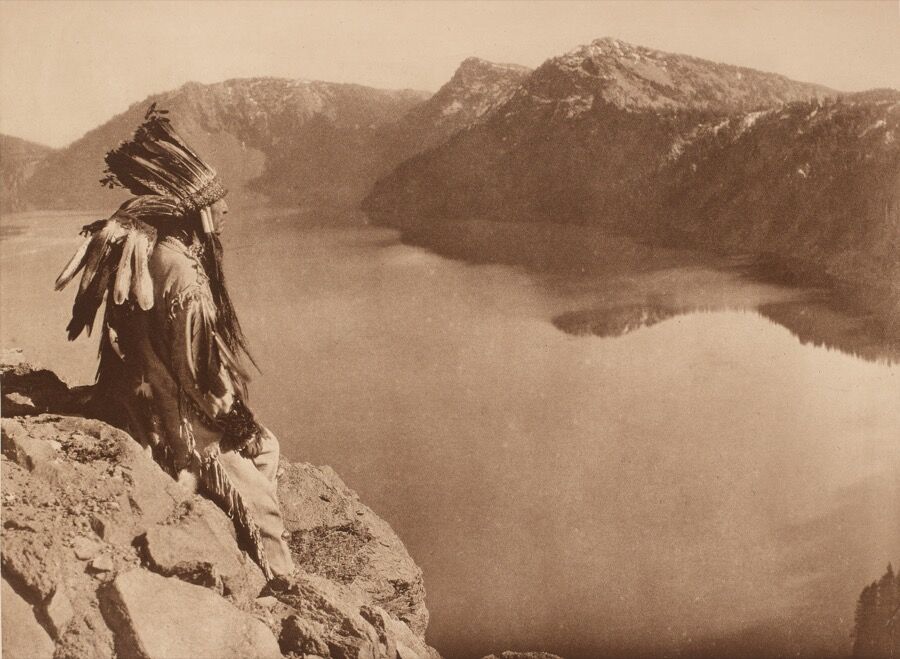 Type “Native American” into Google’s image search and one of the first pictures that surfaces is a soft, sepia-toned photograph of Chief Joseph of the Nez Perce (or Nimi’ipuu) people, who appears in a feathered headdress and animal fur, with wizened face and tensed jaw, looking stoically out at viewers. The image was taken in 1903 by
Edward Curtis
, a non-Native, well after the Nez Perce territories had been reduced from some 17 million acres across what is now Idaho, Oregon, Montana, and Washington to under a million acres in Idaho alone—and a couple of centuries after European settlers began to systematically eradicate native populations.
None of these realities is evidenced in Curtis’s romantic, staged image of his sitter, which transports the revered chief back to a bygone era. Long a controversial figure, Curtis is currently the subject of the exhibition “Contemporary Native Photographers and the Edward Curtis Legacy” at the Portland Art Museum, Oregon, in which three contemporary Native artists respond to, and complicate, his body of work. (He also appears in concurrent shows at the Palm Springs Art Museum and Portland Museum of Art, Maine). The photographer’s over-2,000 published portraits of Native Americans, representing more than 80 tribes, or what Curtis called the “vanishing race,” and constituting his iconic magnum opus The North American Indian, have, over the past century, shaped American perspectives on First Nations peoples.

“I think Curtis’s images have formed an incredible amount of understanding, or misunderstanding, of Native American culture,” says Julia Dolan, the Portland Art Museum’s photography curator. “I can’t help but be stunned at times when I look at these images made at the turn of the century of people doing everyday tasks half nude, or completely nude, like spear-fishing. When
Timothy O’Sullivan
was photographing Native Americans back in the West in the 1870s, they were wearing denim.”
The representation of indigenous peoples as a vestige of the past, irreconcilable with the forces of modernity, is one that tribes around the globe have grappled with throughout the 20th century—and one that indigenous rights groups, like the Native American Rights Fund and Survival International, must continually dismantle. At the same time, Curtis’s project has provided both a valuable archive of information about Native Americans and an entrypoint for the general public. “I believe that a contemporary Native photography show may not have pulled visitors through the door,” says Deana Dartt, curator of Native American art at the Portland Art Museum, who is herself of Native American descent. “But you put Curtis on the outside of the building and they’re flocking in. So they’re being exposed to these incredibly talented contemporary artists they might not otherwise be introduced to.” 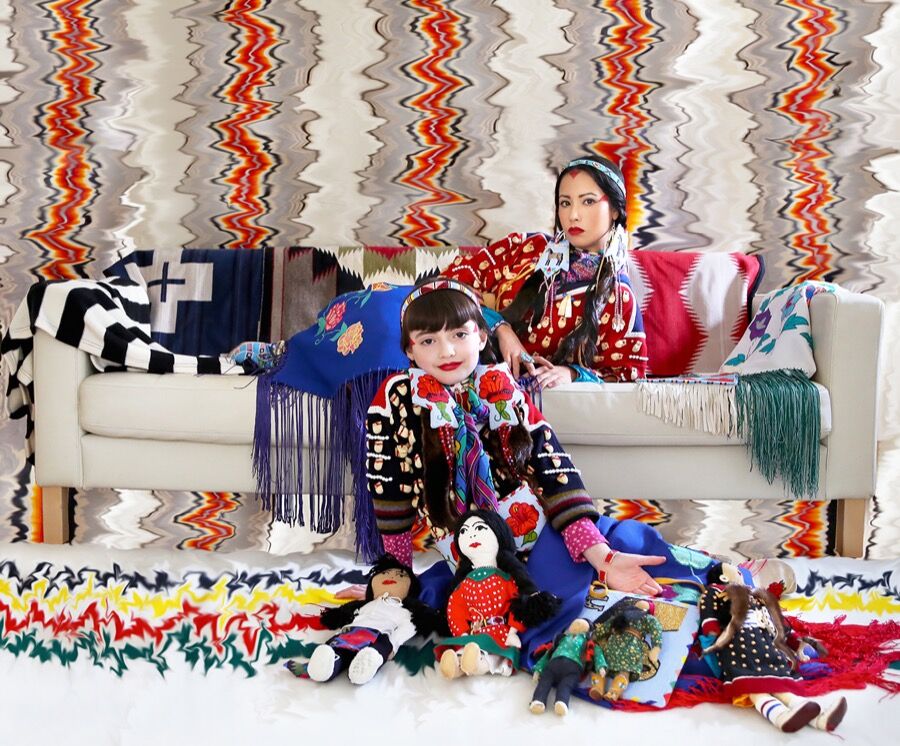 Advertisement
Wendy Red Star, who hails from Montana’s Crow Tribe and is one of those featured in the show, has a similarly complex response to Curtis’s legacy. “I think it’s been blown a little bit out of proportion and because I come from an art background, I understand what he was doing as a photographer, in what was the way you would photograph people at the time,” she says. For Red Star, the archive’s value lies more in the other media Curtis left behind, including wax-cylinder recordings of Crow honor songs. “I might not agree with how it’s packaged and presented, but the fact that I can hear their voices is really important to me,” she says. “There are death songs for when they’re in a war party and they know they’re going to die—and some of those were recorded, so that was really beautiful.”
For Red Star, though, Curtis’s legacy is not without its problems. “The Crows were a matriarchal society, but all of the large portrait photos are of Crow men, no women. And in the book there were some photos of women, but not many. So I made sure that for this exhibition all my work would focus on women.” In one work in the show, Red Star presents a grid of facsimile copies of Curtis’s prints, with the male figures cut out to “give them a rest,” as she says.

Another of the artists to respond to Curtis’s work is
Will Wilson
, a Navajo (or Diné) photographer who allows his indigenous subjects agency in how they’re represented. (Wilson believes Curtis’s images of the Navajo never should have been taken due to their revealing sacred, private ceremonies and information, as Dartt explains.) The show’s third contemporary artist, Zig Jackson, presents photographs that critique the exoticizing tendencies of non-Native depictions of indigenous peoples.
It’s clear that Curtis, whatever the impact of his images, viewed the project as an homage. But his work did little to raise consciousness about the conditions of Native life in early 20th-century America. “He wasn’t someone who was, let’s say happy, or fine, with Native Americans being moved onto reservations and their traditions and religious ceremonies made illegal, their language made illegal,” says Dolan. “But he wasn’t trying to stop that change. He was trying to make a monument, I think, to a people or multiple cultures that he believed would be gone. By the end of the project you can see some of his anger start to seep into the writing. He’s quite disgusted by the U.S. government as he goes on.” 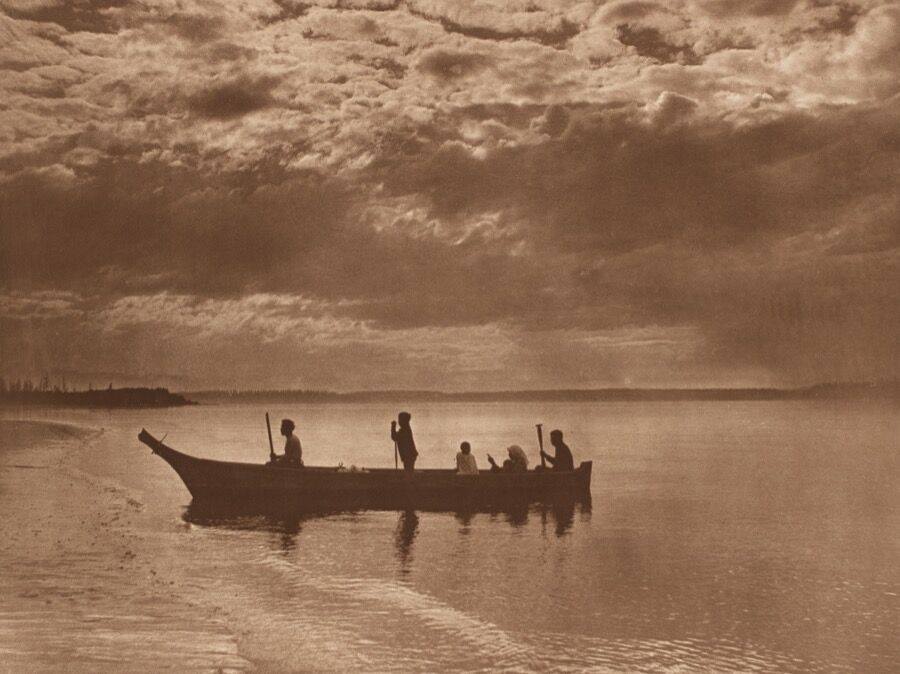 With issues of cultural appropriation so frequently in the press of late, now feels like a particularly relevant time to be revisiting Curtis’s work, which garnered renewed attention in 2012 with the release of Timothy Egan’s Short Nights of the Shadow Catcher—a book that heroized Curtis as a pioneering champion of Native Americans. “I think the best that we can do,” says Dolan, “is to indicate that he is not a demigod like he’s portrayed by many people, including Timothy Egan. But he’s also not a demon. He was a man of his time with all the shortcomings and misunderstandings and inability to remove himself from his time period.”
Curtis’s work, though deeply entrenched in the American consciousness, may itself be superseded in the years to come. Matika Wilbur, an artist of Swinomish and Tulalip descent, has recently embarked on a project perhaps even larger than Curtis’s—traveling out to the 562 federally recognized tribes and photographing them, over a century after Curtis began his project. When it comes out, Wilbur’s volume, Dartt says, may offer a much-needed contemporary counterpart to The North American Indian, and maybe even put Curtis to bed.
Tess Thackara
Related Stories