The Changing Faces of the American West 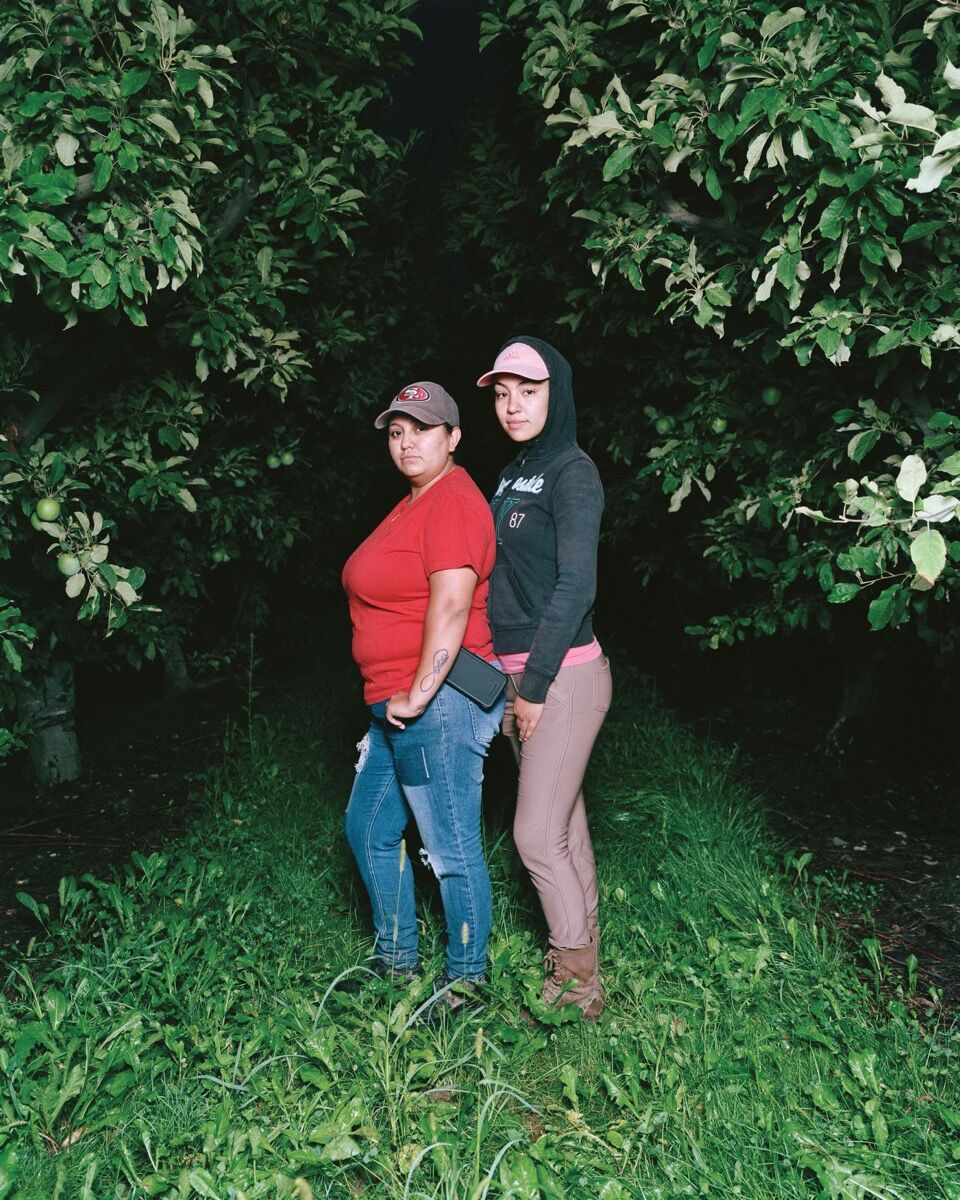 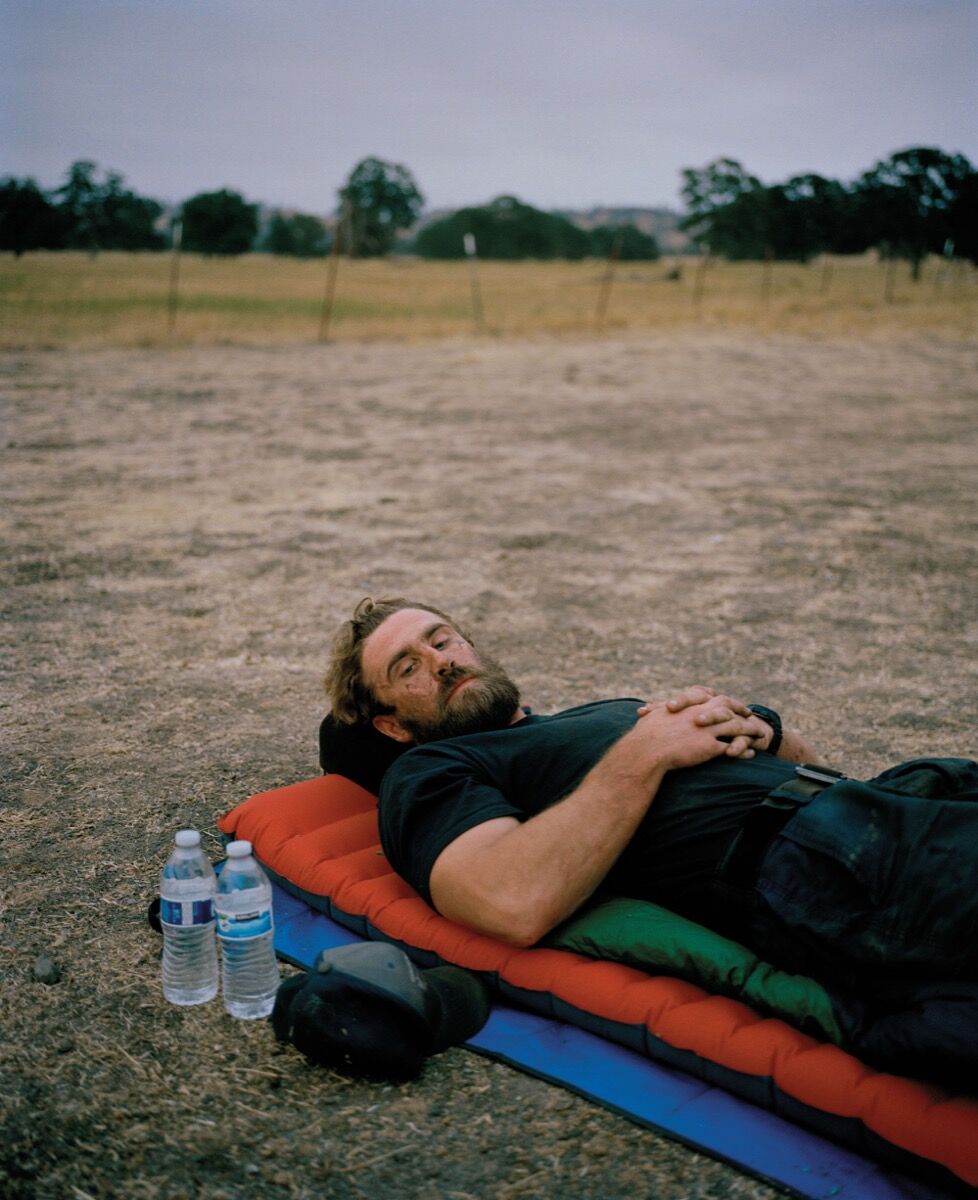 Cowboys, gold rushes, and craggy coastlines loom large in the popular imagination of the American West. Even in the 21st century, films such as No Country for Old Men, Hell or High Water, and The Hateful Eight picture lawless frontiers, ranches, and rugged good looks. Yet that’s hardly the reality for Americans living beyond the Mississippi.
This month, the California Sunday Magazine published an issue entirely dedicated to commissioned photo essays, featuring work that centers on the idea of how people define “home” and shape their communities in the American West. (A selection from the cover essay “At Home” is also on view at New York’s Aperture Foundation through January 4th.) Portrait subjects diverge sharply from, say, the Coen brothers’ depictions of plaid-clad, dusty men; instead, a community fighting gentrification in Boyle Heights or migrant workers in Washington for apple season populate the frames—the subjects are often in states of transience. Far from D.C., the effects of East Coast policymakers reverberate across the pictures. Altogether, the project offers a multifarious conception of a rapidly shifting landscape. 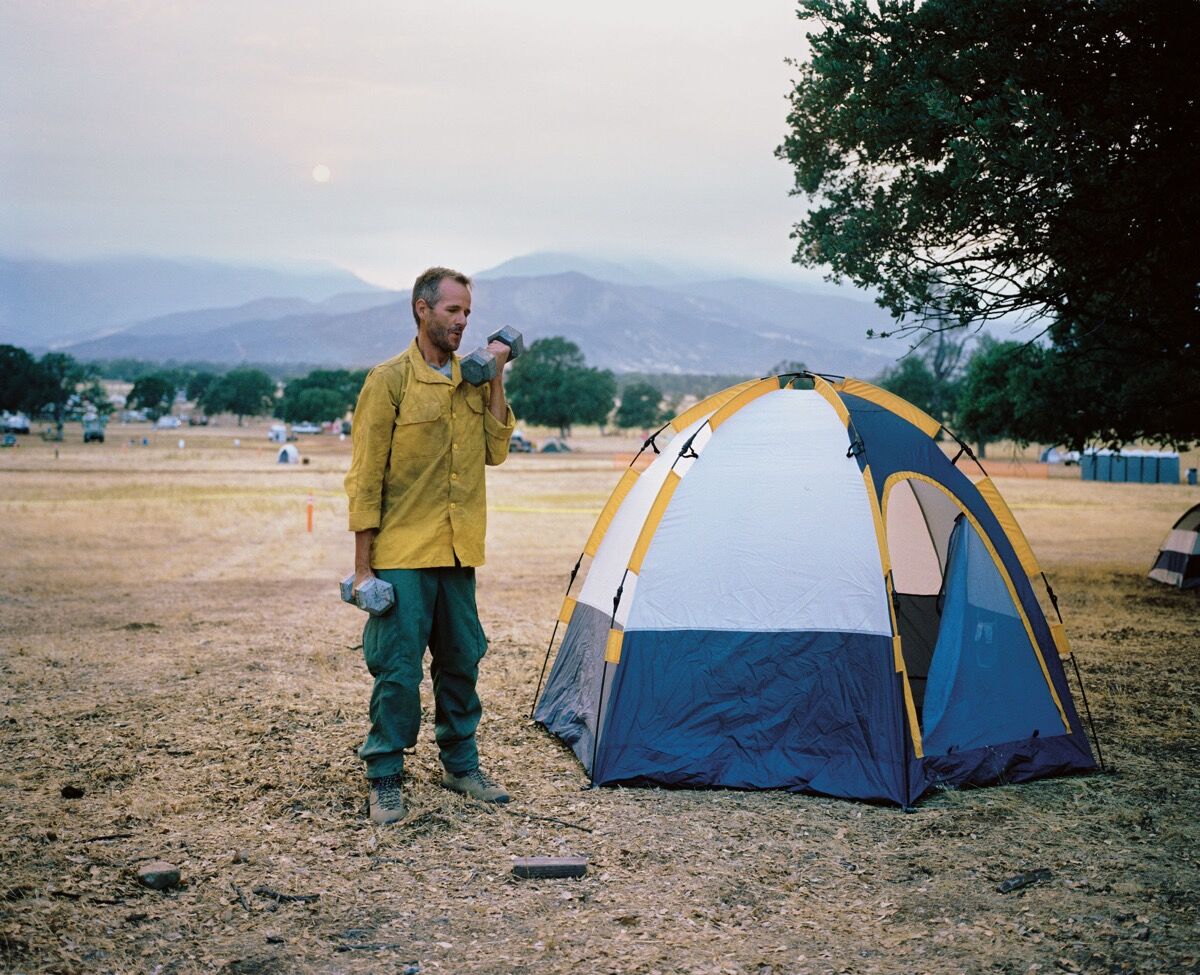 “We turned our lens to the American West in particular so that we could focus and do justice to the wide-ranging, complex theme of ‘home,’” the California Sunday Magazine’s photography director, Jacqueline Bates, told Artsy via email. Her team sent a roster of 34 photographers (including
Jim Goldberg
,
Katy Grannan
, Michelle Groskopf,
Pixy Liao
, and Star Montana) to shoot “the interesting, often overlooked” stories in states west of the Rocky Mountains.
The land itself—alternately hospitable and antagonistic—becomes a character throughout the images. California-born photographer Justin Maxon, for example, has captured firefighters camping out in tents, temporarily relocated to fight his home state’s Mendocino blaze that began in late July of this year. In Maxon’s frames, the environment is flat and arid, though mountains loom in the background. The tents serve as democratizing structures: Black or white, male or female, all the firefighters live in similar small, collapsible homes. Maxon doesn’t highlight drama or heroics, but focuses on the firefighters’ downtime—they shake out their boots, lie on palettes, lift weights, and peek in and out of tents—humanizing the individuals responsible for saving both the people and land of the West.
Indeed, itinerant lifestyles become a major theme throughout the publication. For his part, Washington State–born photographer Andrew Miksys captured two migrant workers, Ruby Acevedo and Marisol Guerra, standing in an orchard in Zillah, Washington. His flash illuminates the trees on either side of the pair—beyond them lurks early morning darkness. The women pose casually in brimmed hats and informal clothing: T-shirt, jeans, hooded sweatshirt. 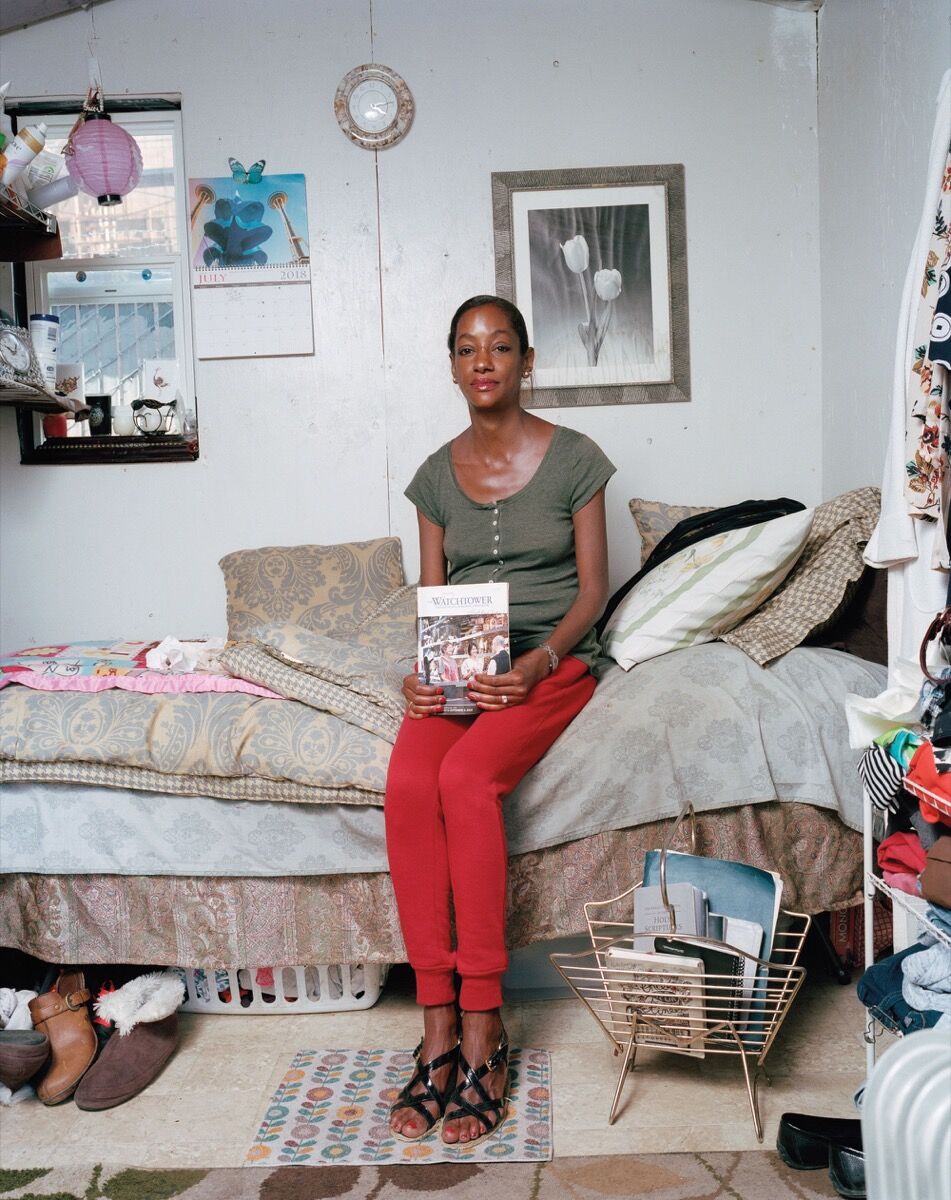 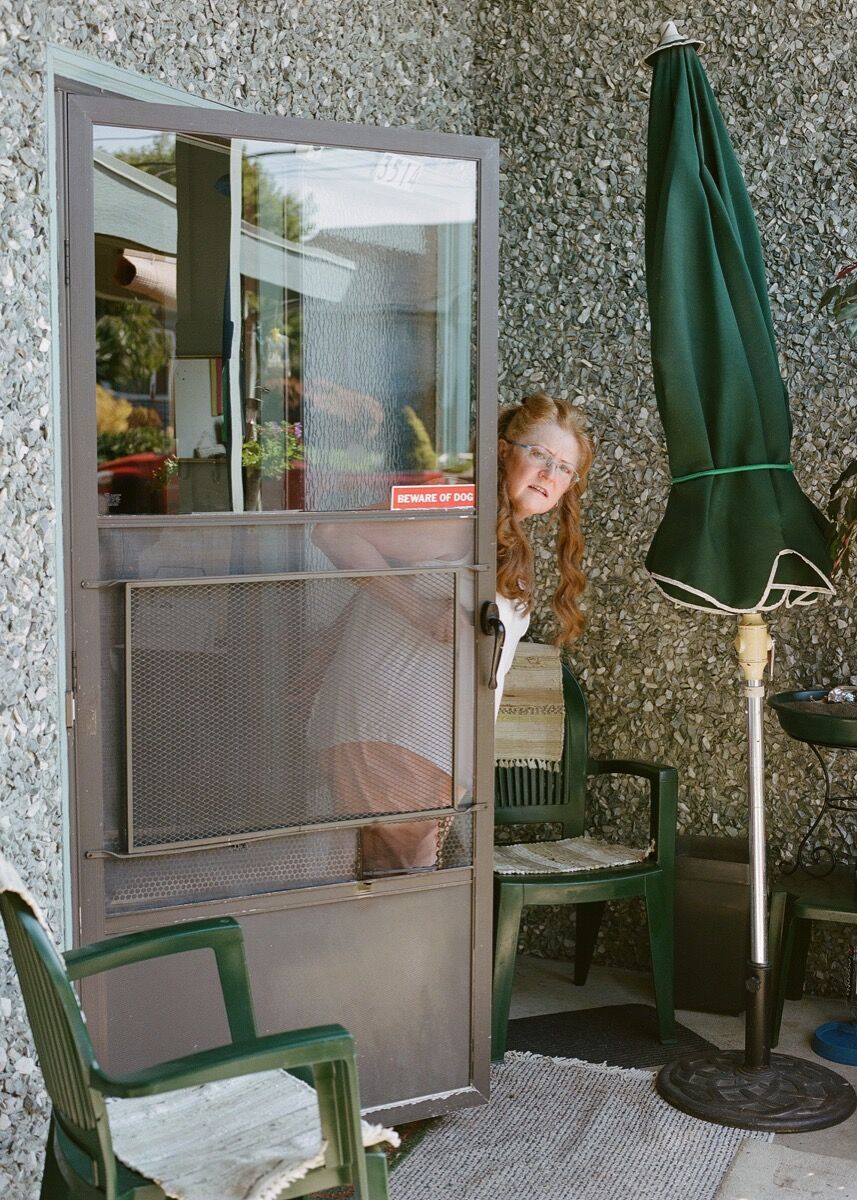 Advertisement
Miksys recalled, by phone, how he met Acevedo and Guerra. After a frustrating day, unable to locate any subjects for a series of photographs on apple pickers, he checked into a Motel 6. The woman at the reception desk told him that there was a whole crew in town from California, staying just rooms away from him. She introduced Miksys to them, and the group became eager subjects. “They worked right from dawn, which was around 5 a.m., until noon,” Miksys said. “Then it got too hot. It was August and there were all the forest fires, too. The air was really bad.” Going into the fields with them so early, he learned a lot about Washington’s agricultural work. The group comprised mostly Mexican-Americans, in town from Stockton, California. Miksys said they enjoyed posing for his camera—he prefers shooting people in self-determined postures, instead of participating in candid activities.
Miksys now lives in Lithuania, though he returns to Washington State at least once a year. “It’s always a bit of a culture shock,” he said. “I never really expected it to be so expensive.” Income inequality and insufficient wages have led to worsening homelessness in Seattle, he explained. In his second shoot for the issue, he captured Anita Spann, a formerly homeless woman. She sits on her bed in her own home in the Pacific Northwest city, surrounded by her clothes, shoes, and books. “I was in a shelter, and they were closed, and I was running from here to there,” she told the California Sunday Magazine. “Now I have a double door with my own lock. You can put anything in your own home and come and go as you please.”
Throughout the issue, viewers will find subjects that welcomed the photographers themselves into their private, personal spaces. A sense of openness prevails, even when people appear reticent about sharing their living quarters. Lauren Angalis Field captured a red-haired woman, Debbie Austin, peeping out from a screen door with a “Beware of Dog” sticker. Talia Herman caught Dennis Yang sitting on a deck, while a child plays with the porch bars in front of him. Katy Grannan snapped her shutter on a woman, Elisabeth Gambrell, peering over a wooden fence, recalling that adage popularized by Robert Frost: “Good fences make good neighbors.” 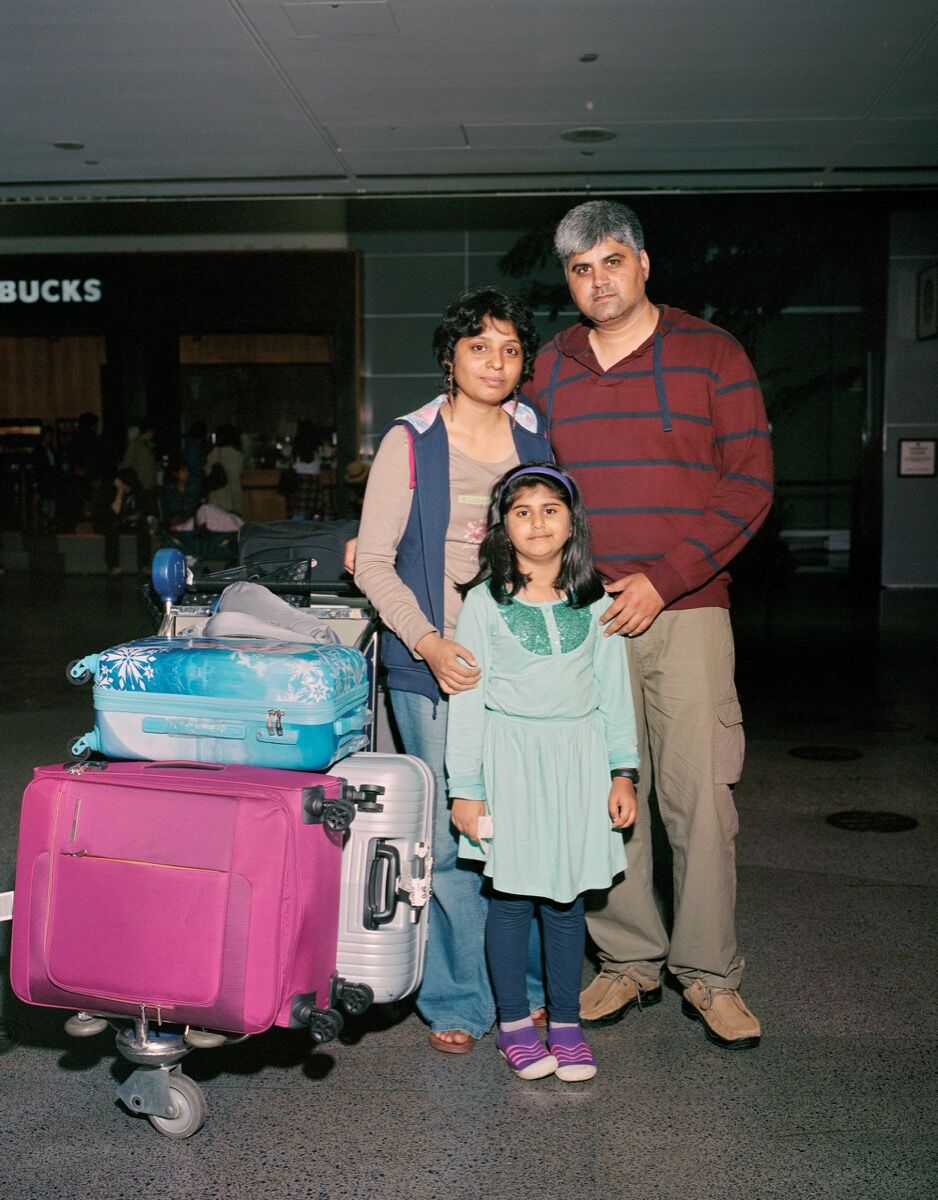 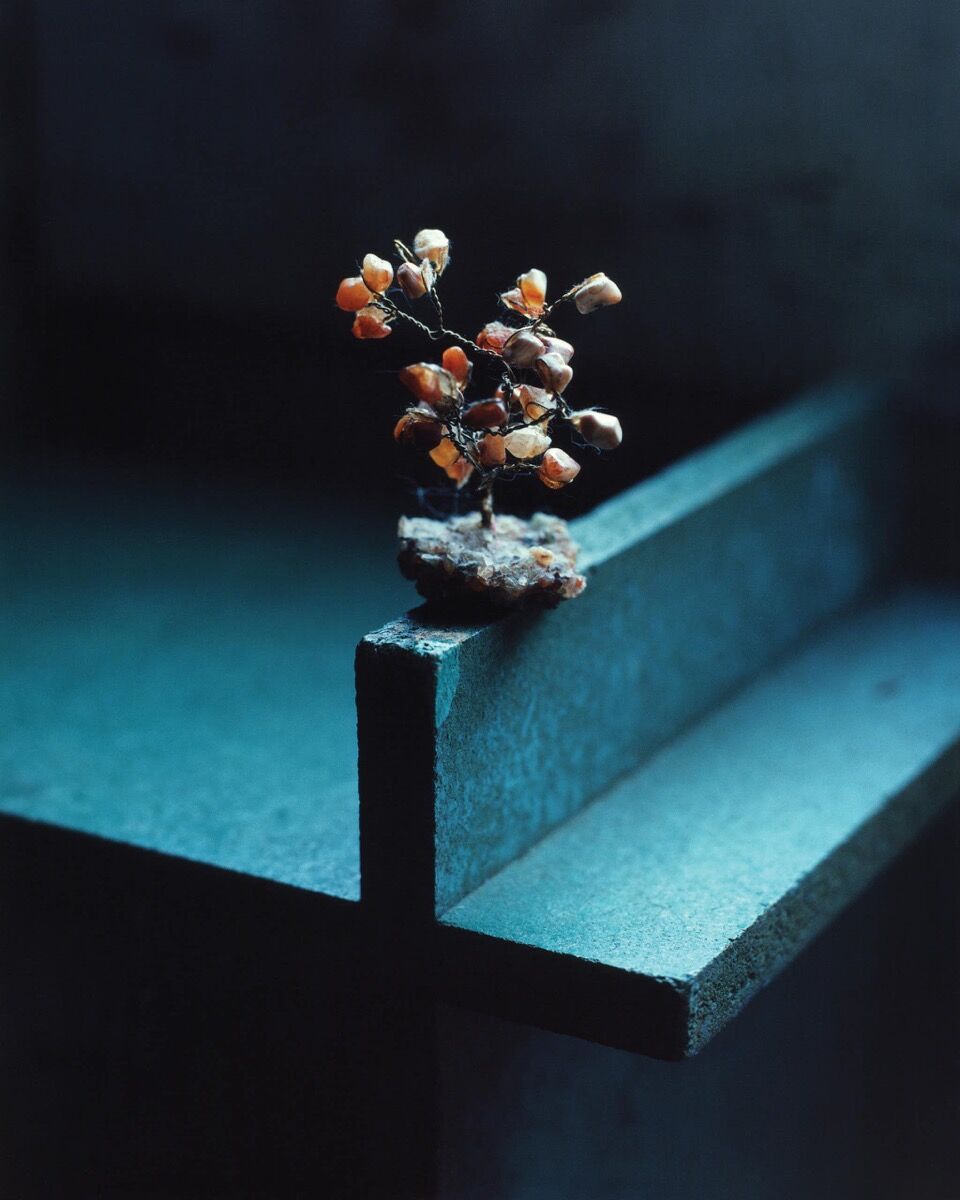 Carlos Chavarría, Kenya Maquez, 54, born in Mexico and studied in France and Germany. Courtesy of the California Sunday Magazine.

Yet not all of the magazine’s subjects are so happily settled. Elsewhere in the publication, readers can find Erin Brethauer’s and Tim Hussin’s photographs of the San Francisco International Airport. Faces blur while coming and going, situated in a transitory space. One subject, Yirgalem Berhane, sits on a bench amid densely packed suitcases; the text reveals that he’s returning to Ethiopia after failing to find a wife in America. In another image, two parents stand with their arms around their young daughter; they’re in the U.S. on a tenuous visa—their nine suitcases define them. Elsewhere, children gape from black-cushioned airport chairs, and four adults stand in a circle, embracing one another. The liminal setting becomes a site of simultaneous curiosity, angst, and joy.
Sometimes the photographers turn their cameras away from human subjects and landscapes, in order to tell stories through mundane objects. For one series, Carlos Chavarría took still-life shots of shoes, cassette tapes, and other belongings that have survived their various owners’ lifetimes of moves. For another set of pictures, he captured an assortment of meals: a hamburger and fries on a wooden table, a Chinese takeout box, a soup and salad on a floral tablecloth. Altogether, the publication posits that “home” can mean an amalgamation of people, places, and things.
Ultimately, Bates hopes that readers will better understand how people from different racial and socioeconomic backgrounds have searched for or found a sense of place in the West. “It’s an issue that, at its heart, is empathetic,” she said. “We’re learning from people—and listening to them—as they talk about incredibly personal aspects of their lives. And there’s nothing more intimate than home.”
Alina Cohen
Related Stories