Charles White’s Artworks Made Him an Icon for Black Artists 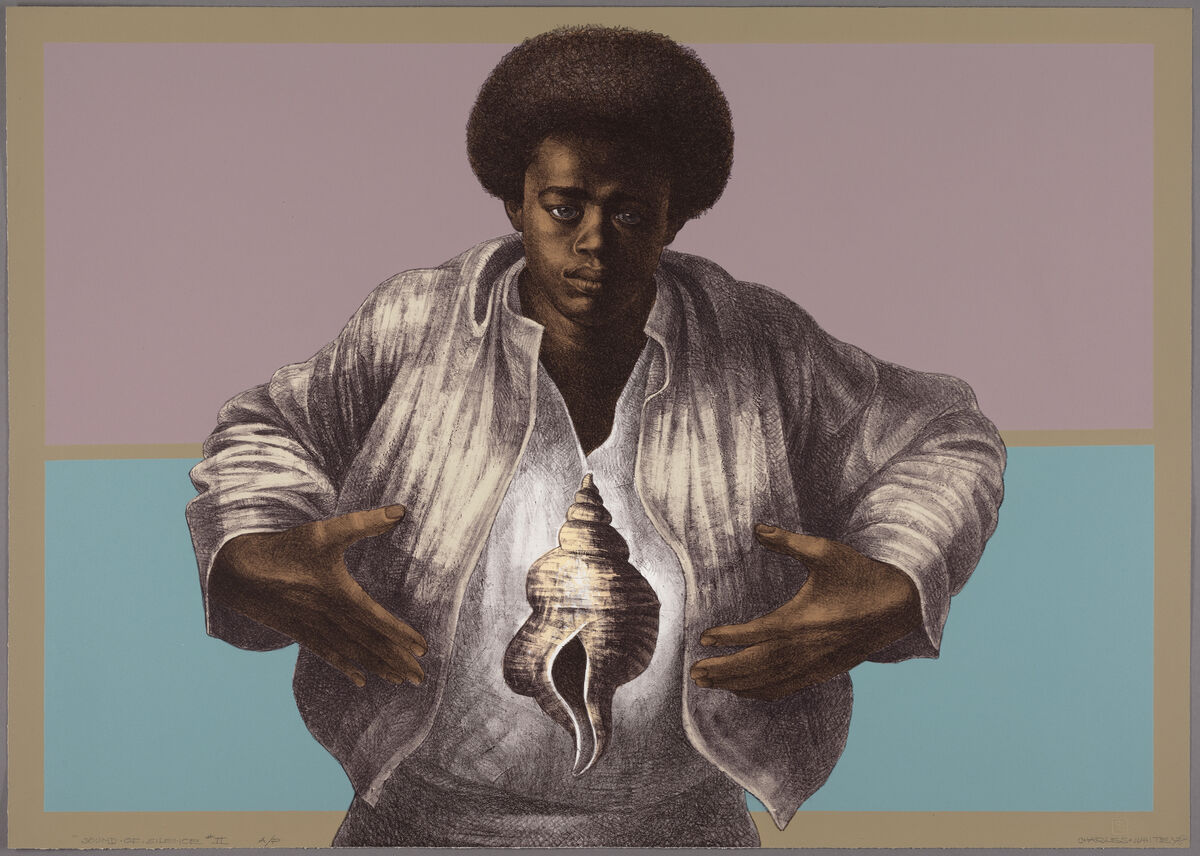 Charles White, Sound of Silence, 1978. © 1953 The Charles White Archives. Courtesy of The Museum of Modern Art.

In the 1940s,
Charles White
made some drawings and paintings that his mother wasn’t sold on. They were too angular and stylized; she didn’t understand what he was doing, why he’d abstracted his subjects’ bodies. White was apparently troubled by this, because ultimately, “he made the decision that he was going to make images that she could see and understand,” said Esther Adler, curator of the Museum of Modern Art’s recently opened retrospective of the pioneering artist’s work, which traveled from the Art Institute of Chicago.
White’s figures grew more realistic in the 1950s, even as the backgrounds of his paintings by and large dissolved away, leading to some of the 20th century’s most monumental images of African-Americans. There’s Harriet Tubman seated on a heavy rock that seems suspended in space; White’s iconic Black Pope (Sandwich Board Man) (1973), dressed in a sandwich board and aviator sunglasses, posed against an abstracted background with a skeleton hanging behind him; ordinary black men and women emerging from empty space or flat backdrops, stoic and defiant. 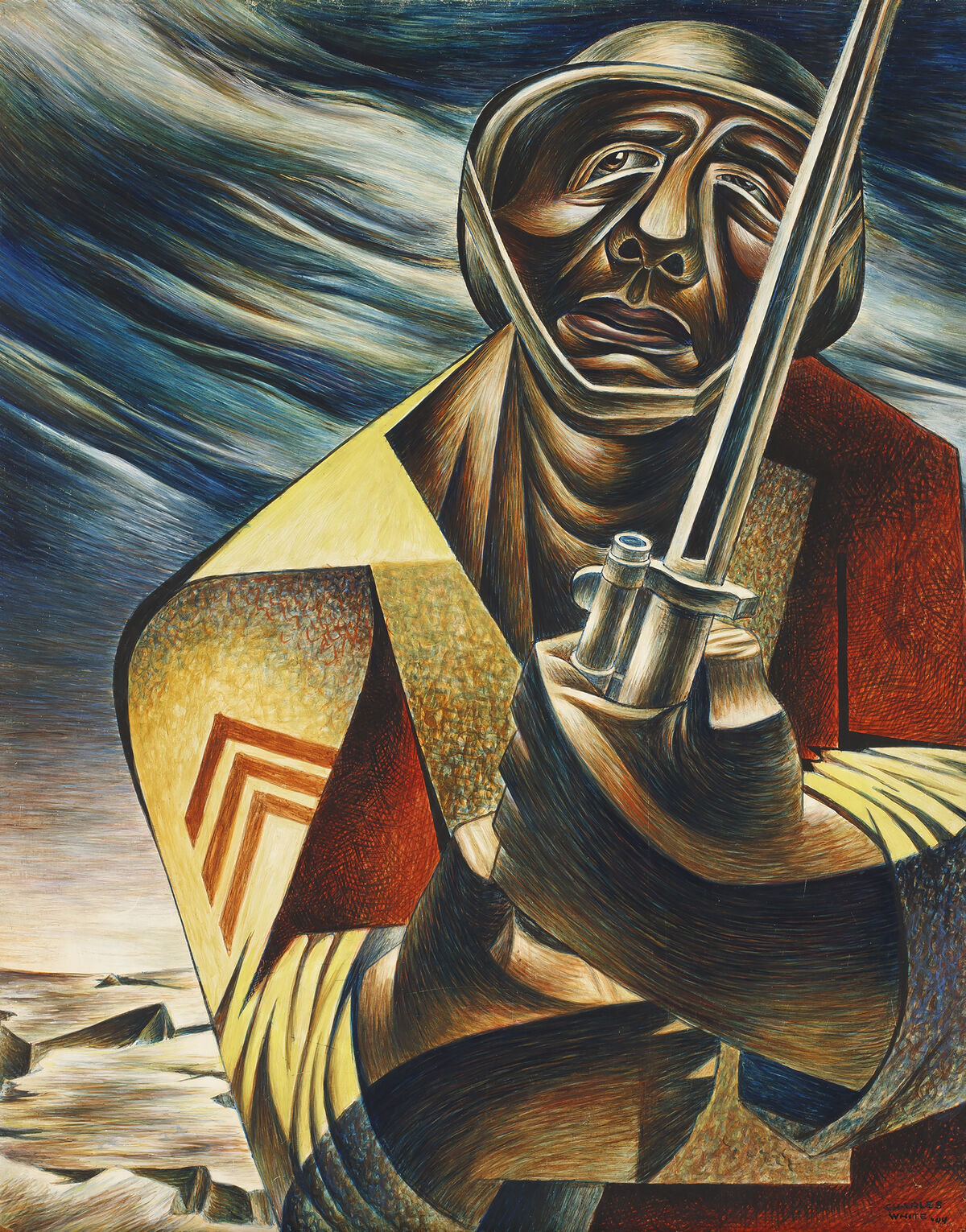 White’s influence is difficult to overstate, due in part to the immediacy of his work—the sculptural presence of his figures and the emotional force of his compositions—as well as his legacy as a longtime teacher and mentor to students at L.A.’s Otis College in the 1960s and ’70s, when only a handful of black artists had achieved national prominence in the United States. (A survey pairing White’s work with that of some of the younger talents he fostered goes on view at the Los Angeles County Museum of Art early next year.)
“He was a kind of spiritual father for many of us,” wrote celebrated contemporary painter
Kerry James Marshall
, who studied under White at Otis, in the catalogue for the exhibition. “Nobody else has drawn the body with more elegance and authority. No other artist has inspired my own devotion to a career in image making more than he did.” For artist
David Hammons
, White’s mere existence came as something of an epiphany. “I never knew there were ‘black’ painters, or artists,” he said in 1970. “There’s no way I could have got the information in my art history classes.”
White came of age in Chicago during the Great Depression, when
social realist
art (in the vein of
Thomas Hart Benton
, or a little later,
Jacob Lawrence
) was viewed as a legitimate vehicle for change. He had visited the Art Institute of Chicago as a child, drawing in the galleries, taking in
El Greco
’s awe-inspiring The Assumption of the Virgin (1577–79). As a teenager, he read and was affected by
Harlem Renaissance
thinker Alain Locke’s influential anthology The New Negro: An Interpretation, which framed art as central to advancing the position of African-Americans. He paid attention to the book’s reproductions of
Winold Reiss
’s portraits of black Americans. He later cited
Francisco de Goya
and
Käthe Kollwitz
—figurative artists who made prints and drawings, and whose work dealt with social history—as strong influences. 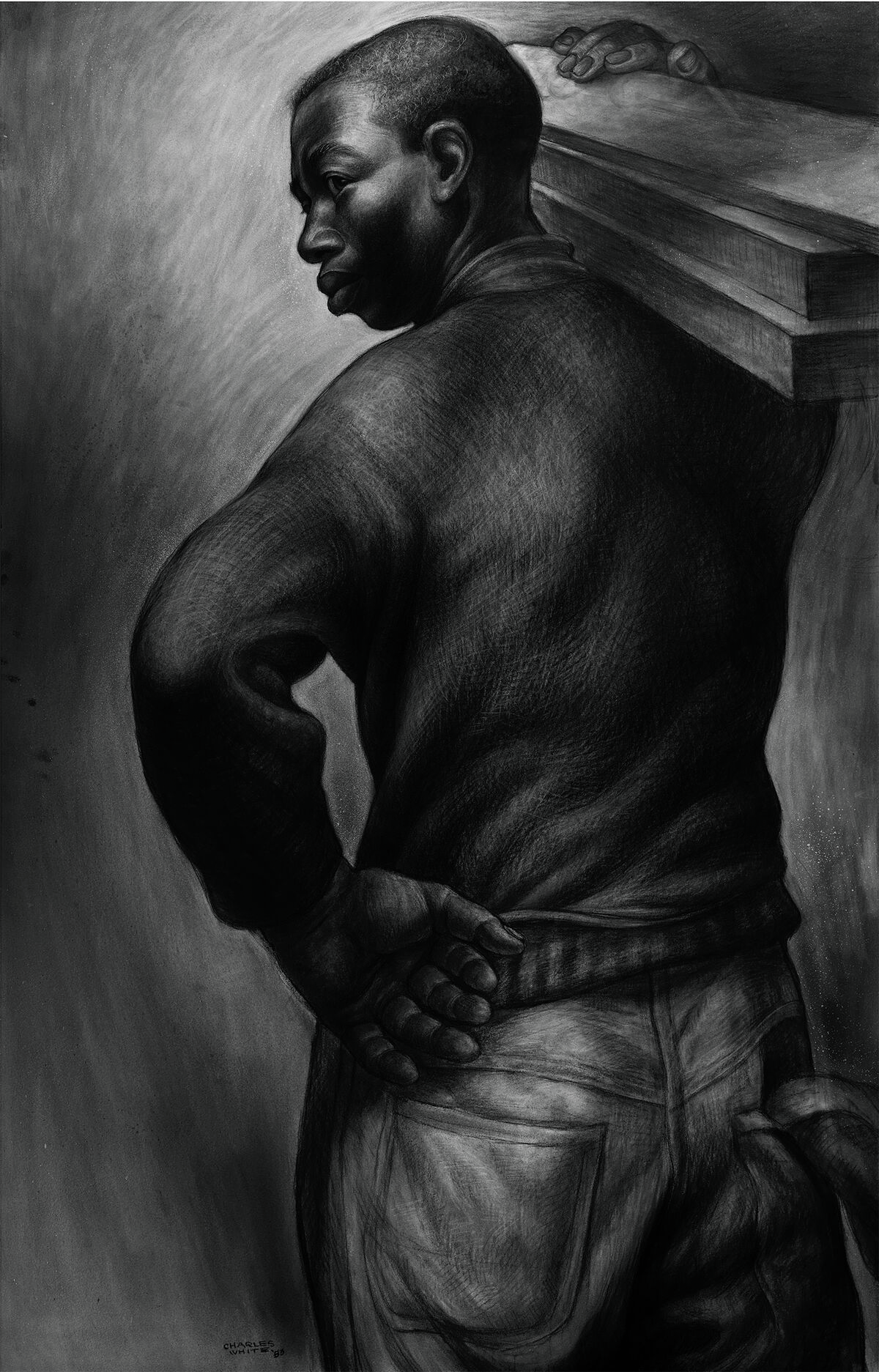 Advertisement
He began working for the
Works Progress Administration
in 1938, and for the next six years, he would devote himself to working on large-scale murals like The Contribution of the Negro to Democracy in America (1943) at Hampton University in Virginia. It’s a fiery maelstrom of an image, dominated by a pair of clenched fists that are set to break through chains as Booker T. Washington, Harriet Tubman, Frederick Douglass, and other black liberators look on. It recalls
Diego Rivera
’s Detroit murals, made 10 years earlier (indeed, White and artist
Elizabeth Catlett
, who was then his wife, would travel to Mexico in 1946 and work with Rivera).
When White and his second wife, Frances Barrett White, settled in Los Angeles in 1956 a decade later—after a period in New York, frequent trips to the American South, and visits to Europe and the Soviet Union—a greater sense of space began to enter his work. In Folksinger (Voice of Jericho: Portrait of Harry Belafonte) (1957), he renders the famous black singer, who was a friend and supporter of White, belting out a song toward the heavens, his head raised, his lungs emptying their oxygen into the deep darkness that surrounds him.
As the American Civil Rights movement gathered speed in the 1960s, “the specificity of context” in White’s work “gets replaced by a sense of the magnitude of history,” said Adler. Setting figures against deep or shallow backgrounds, White focuses the viewer’s eye toward his or her body. “You get less of a sense of them being in a real space,” Adler continued. The space is “more spiritual, more symbolic.” The effect of this can be seen in the moving Birmingham Totem (1964), made in honor of the 1963 bombing of a baptist church in Birmingham, Alabama, where four African-American girls were killed. White portrays a young boy examining a mound of wreckage, the splintered fragments of the church beneath his feet. As art historian Kellie Jones wrote in her book South of Pico: African American Artists in Los Angeles in the 1960s and 1970s, the boy’s “hands are engaged, as if he is caressing the ruins.” She pointed out that in his right hand, he holds a plumb line, “marking him as a builder and creator, symbolic of those who reconstruct and renew, removed from such despicable acts of racial hatred and intolerance.”
The boy’s crouching body is cloaked, forming the head of this totem of trauma. Set against the blank, cream-colored surface of the paper, the boy and the rubble together resemble the assembled outline of a figure—suggesting the restorative power of the body, or perhaps the load of suffering that the body must bear.
White would adopt this hunched, cloaked figure in later works as something of a stand-in for the homelessness and disenfranchisement rampant among African-Americans—but also the community’s resilience and dignity in the face of racism. In J’Accuse #1 (1965)—the first of a series whose name references the Dreyfus affair, a famous episode of anti-Semitism in France—a female figure sits, pyramidal, Madonna-like, enrobed in a thick blanket. She represents a powerful moral indictment of systemic prejudice and oppression. In Mississippi (1972), she is further abstracted from any background and made the center of a kind of inverted, twisted compass, with north at her feet and a bloodied handprint over her head standing in for the south. Even as White effectively turns his subject into a symbol, she has such weight and solidity, her features so carefully drawn, that she also asserts herself as an individual. 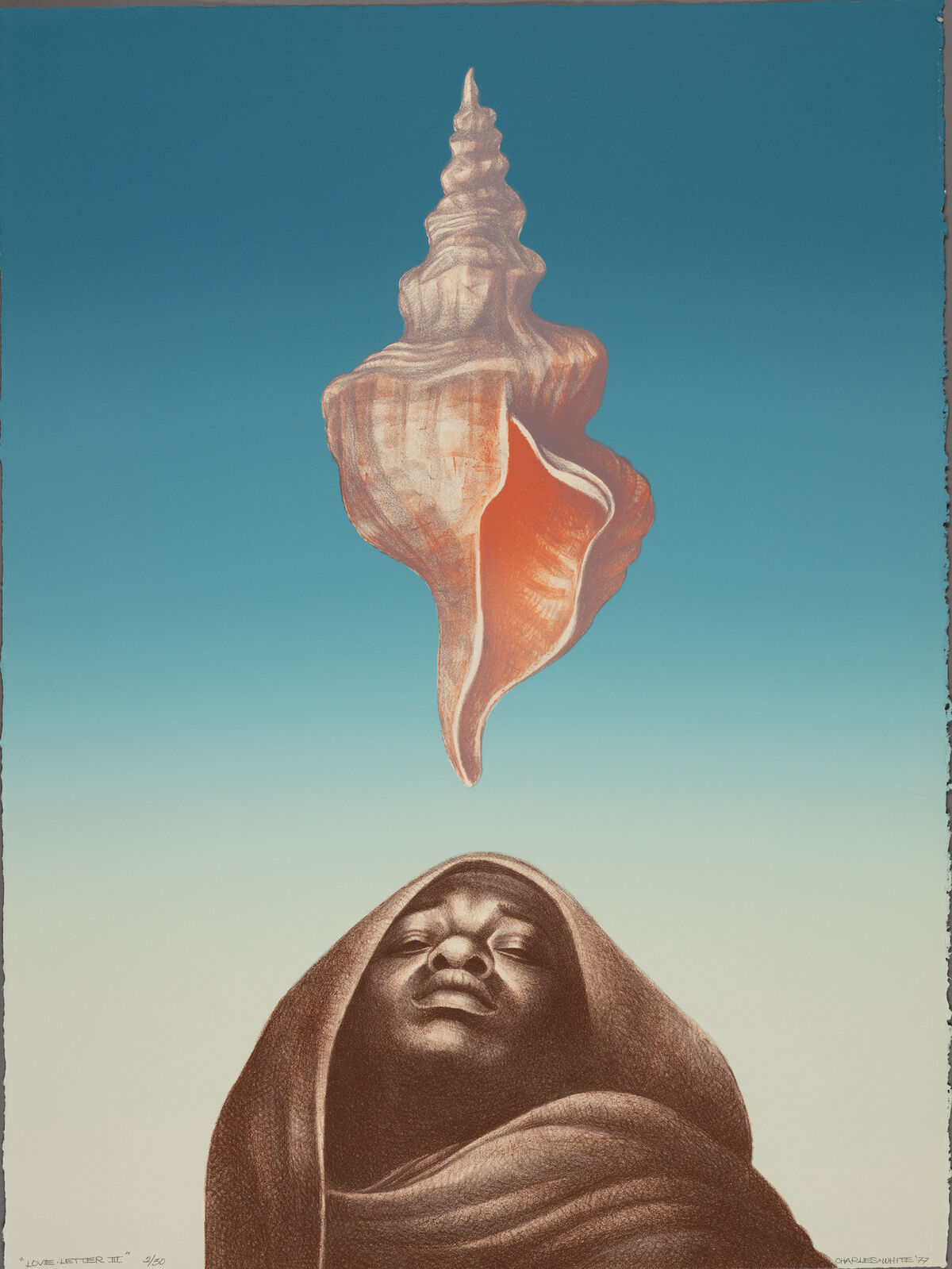 Charles White, Love Letter III, 1977. © The Charles White Archives/ The Art Institute of Chicago. Courtesy of The Museum of the Modern Art.

While White’s work seemed to grow increasingly urgent with his “Wanted Poster Series,” begun in 1969—in which he riffed on 19th-century slave auction posters and notices of runaway slaves to portray black men, women, and children as a fugitive race—he held that his images came from a place of optimism.
“My whole purpose in art is to make a positive statement about mankind, all mankind, an affirmation of humanity,” he told the Los Angeles Times in 1964, as quoted in Jones’s book. “This doesn’t mean that I’m a man without angers—I’ve had my work in museums where I wasn’t allowed to see it—but what I pour into my work is the challenge of how beautiful life can be.”
Two years before he passed away, White created the color lithograph Love Letter III (1977), in which a cloaked woman appears against a rich turquoise background. Her face is turned upwards, towards a giant conch shell that floats above her—a symbol that writer Amy Crawford notes the artist used to represent feminine creativity. Women were a constant presence in White’s work, as was the spirit of his mother. Ethelene Gary Marsh had migrated from Mississippi to Chicago years earlier, and it was she who gave him a paint set when he was 7 years old; who dropped him off at the library on her way to work, where he learned about black history—and who, perhaps, in some small way, helped to steer his practice towards a more accessible, powerfully universal language.
Tess Thackara
Related Stories 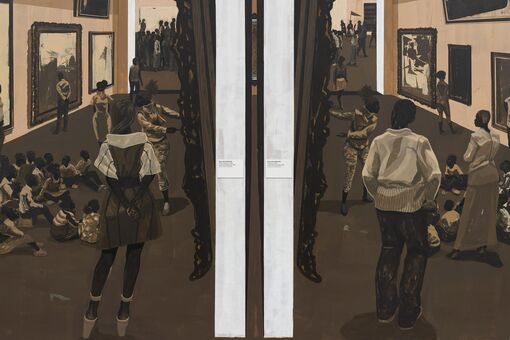