A photo of the late German artist
Charlotte Posenenske
, taken in 1967 at Kleine Galerie in Schwenningen, channels the confidence of an artist on the rise. Wearing a navy turtleneck, slacks, and a pixie cut, Posenenske stares down at the camera with a half-smile. Her sculptures resembling steel air ducts loom in the background. These reconfigurable works, from her series of “Vierkantrohre”—literally translated as “Square Tubes”—represented her latest formal breakthrough. The “Square Tubes” are comprised of separately sold square, rectangular, connector, and bracing “T” pieces made of industrially produced galvanized sheet steel. Consumers—the artist’s preferred term for the people who bought her work—can purchase and install these elements in any combination they want. Even more radically, the works, which can be endlessly refabricated, are sold at the cost of their materials. The artist, in other words, did not conceive them to turn a profit.
In her Kleine Galerie exhibition brochure, Posenenske introduced the DIY approach to her sculpture with a statement that reads like a user-friendly furniture-assembly manual: “You can proceed according to a set program or you pick individual possibilities according to your personal taste,” she explained. “After all, there’s enough of them. Don’t worry if you’re never ‘done,’ because the re-combination could proceed in perpetuity without ever becoming boring.” Unlike many of her
Minimalist
peers, Posenenske refused to philosophize about the work: “What else they are or can mean (art and stuff like that), will not be discussed here,” she wrote. “The main thing is that you can change things.” At the end, she added: “Have fun!” 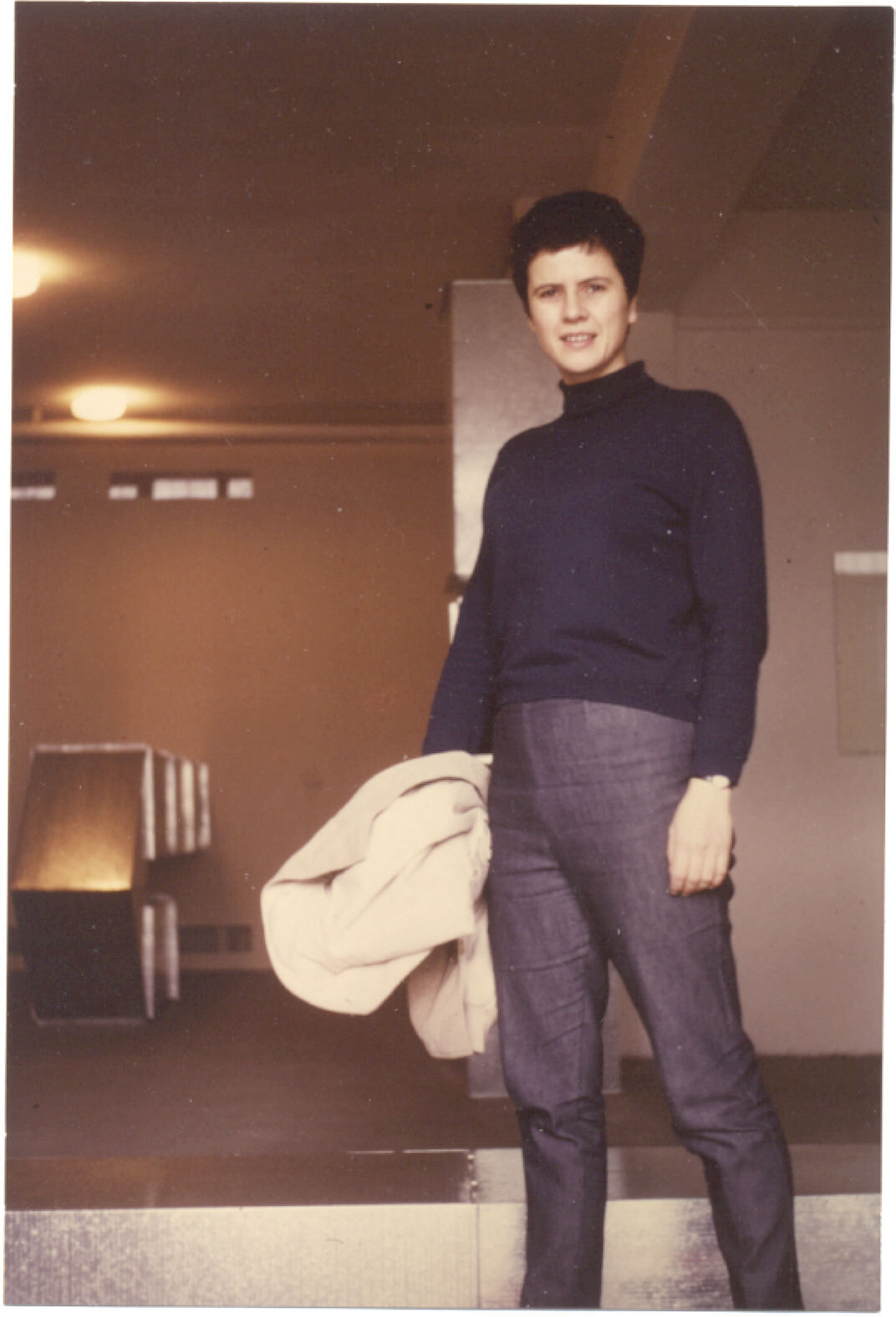 Charlotte Posenenske at the Kleine Galerie in Schwenningen, Germany, 1967. Courtesy of Peter Freeman, Inc. and the Estate of Charlotte Poseneske, Frankfurt on the Main. 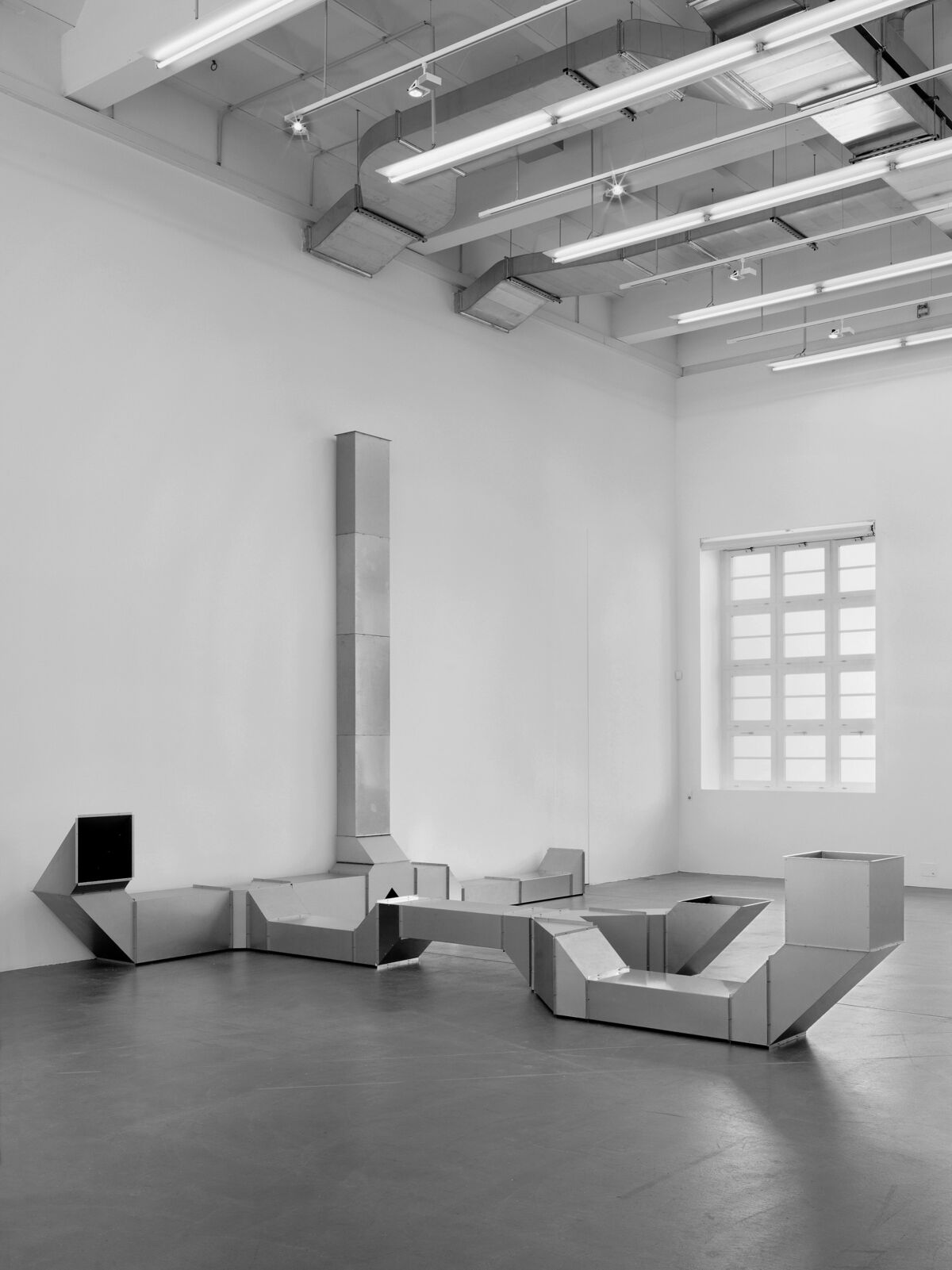 A year later, however, Posenenske’s life took a dramatic turn. In 1968, at age 37, she stopped producing new work. A year after that, she began a sociology Ph.D. program at the university in Frankfurt with her partner, Burkhard Brunn, who shared her ambition to improve conditions for factory workers. Against the backdrop of the May 1968 student revolutions, Posenenske penned a fiery manifesto for Art International that is considered her farewell address. It traces her development from a socially committed formalist artist to a budding sociologist. “They are decreasingly recognizable as ‘artworks.’ The objects should have the objective character of industrial products,” she declared by way of explaining her most recent sculptures made of steel and cardboard. She continued with a damning assessment of the art world. “Though art’s formal development has progressed at an increasing tempo, its social function has regressed,” she wrote, concluding that “it is difficult for me to come to terms with the fact that art can contribute nothing to solving urgent social problems.”
Posenenske’s early exit from the studio, followed by her death from cancer in 1985 at age 54, nearly erased her name from art history. Although her profile has risen since her inclusion in the 2007 edition of Documenta, she is still virtually unknown in the United States. A retrospective opening this March at Dia Beacon, entitled “Charlotte Posenenske: Work in Progress,” aims to change that. The survey will cover the breadth of Posenenske’s drawings, paintings, and sculptures produced over 12 brief years. 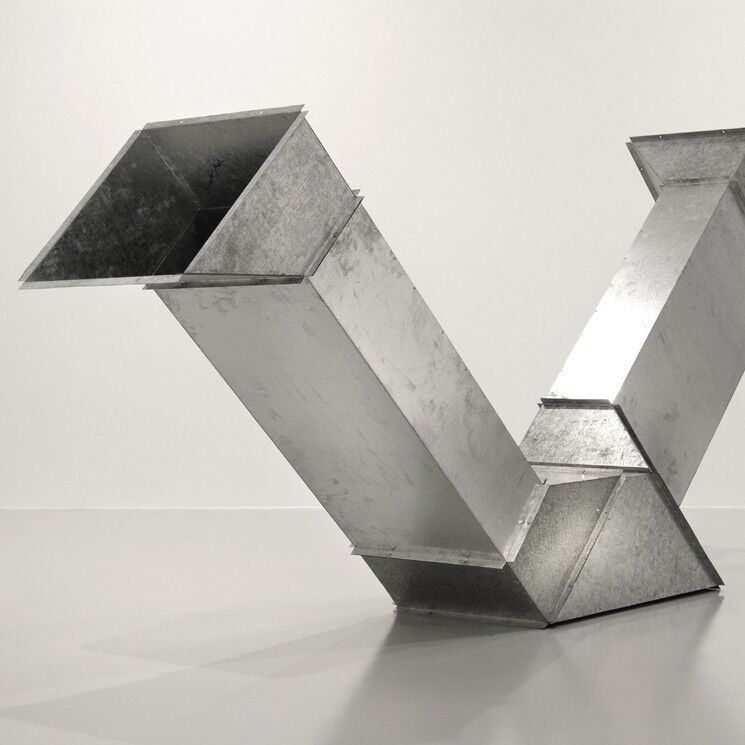 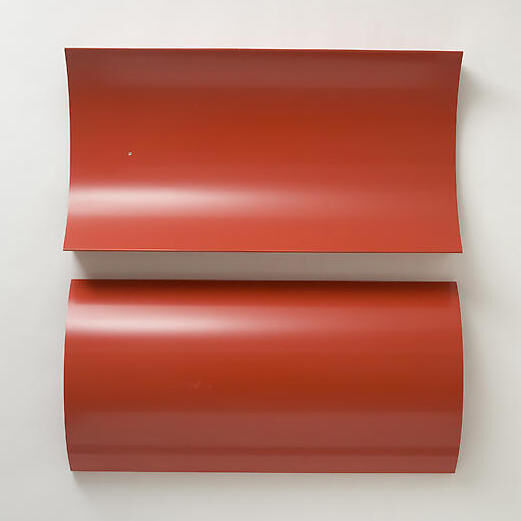 Charlotte Posenenske
Series B Relief, 1967-now
Gallery Sofie Van de Velde
Advertisement
Co-organized by Dia director Jessica Morgan and associate curator Alexis Lowry, Posenenske’s show will occupy prime real estate in Dia Beacon. The airy former Nabisco factory is a fitting setting for her works. As Lowry explained in a phone call this winter, Posenenske was a peer of the Minimalist artists that form the backbone of Dia’s collection. She exchanged letters with
Sol LeWitt
, showed alongside
Donald Judd
, and drove
Carl Andre
around Germany when he came to visit. She was also a locus of the
Conceptual
art scene abroad; Frankfurt became a vital site for emerging Conceptualist discourse, and her friends
Peter Roehr
and Paul Maenz showed Posenenske’s work in the influential 1967 exhibition “Serielle Formationen” (“Serial Formations”) alongside Andre, LeWitt, Judd,
Agnes Martin
,
Andy Warhol
, and important European names in the movement.
Unlike many of her peers, however, Posenenske could never disentangle her art from her politics. Born in 1930 in Wiesbaden, Posenenske experienced severe trauma during World War II. Her Jewish father committed suicide when she was nine, and two years later, she went into hiding to avoid deportation. After the war, Posenenske went on to study modern art in Stuttgart with
Willi Baumeister
, an avant-garde artist who, despite being persecuted by the National Socialists, remained in the country throughout the war. 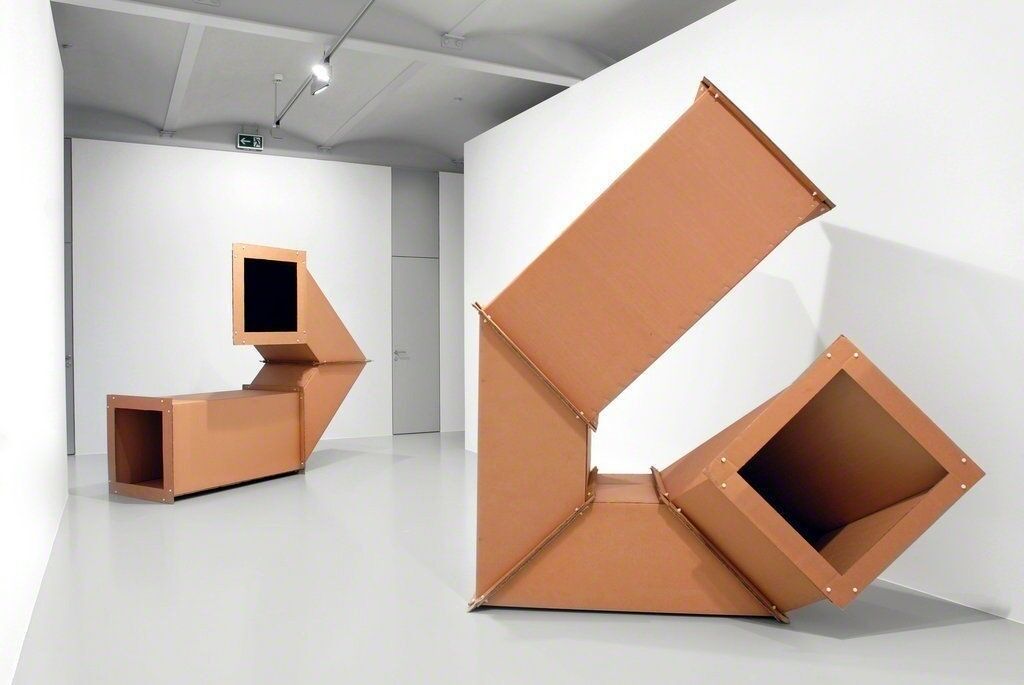 Charlotte Posenenske
Series DW
Gallery Sofie Van de Velde
In her early twenties, Posenenske worked in theater as a costume designer in Lubeck and as a stage designer in Darmstadt. Lowry explained that these jobs influenced her future direction in several ways. “Theater exposed her to the idea that works of art can be collaboratively realized,” she said, noting how there was even a political undercurrent to traditional stage productions at the time. “It also showed her how works of art can be spatially transformative and can set the conditions for creative thinking, which is how her serial sculpture ends up working. These objects are meant to invite and encourage creativity on the part of the consumer.”
In the mid-1950s, Posenenske began experimenting with various abstract painting techniques, including serially produced palette-knife works and airbrushed pictures, while also playing with formal strategies like the partition grid—a tool for plotting three-dimensional space. But she turned to sculpture to achieve her goals of inviting total participation. At the same time, she was frustrated with politics—both the centrist electoral political system and the limited impact of groups like the Socialist German Student Association (SDS), of which she was an inactive member. Posenenske saw her manipulable, reproducible sculptures as an alternative to art-as-usual and political organizing. Ultimately, though, she would find art too open-ended as a social tool. As art historian Christine Mehring wrote in Artforum, “Making art more accessible, participatory, and interactive was, for Posenenske, not enough; it was not commensurate with her notions of political responsibility.” 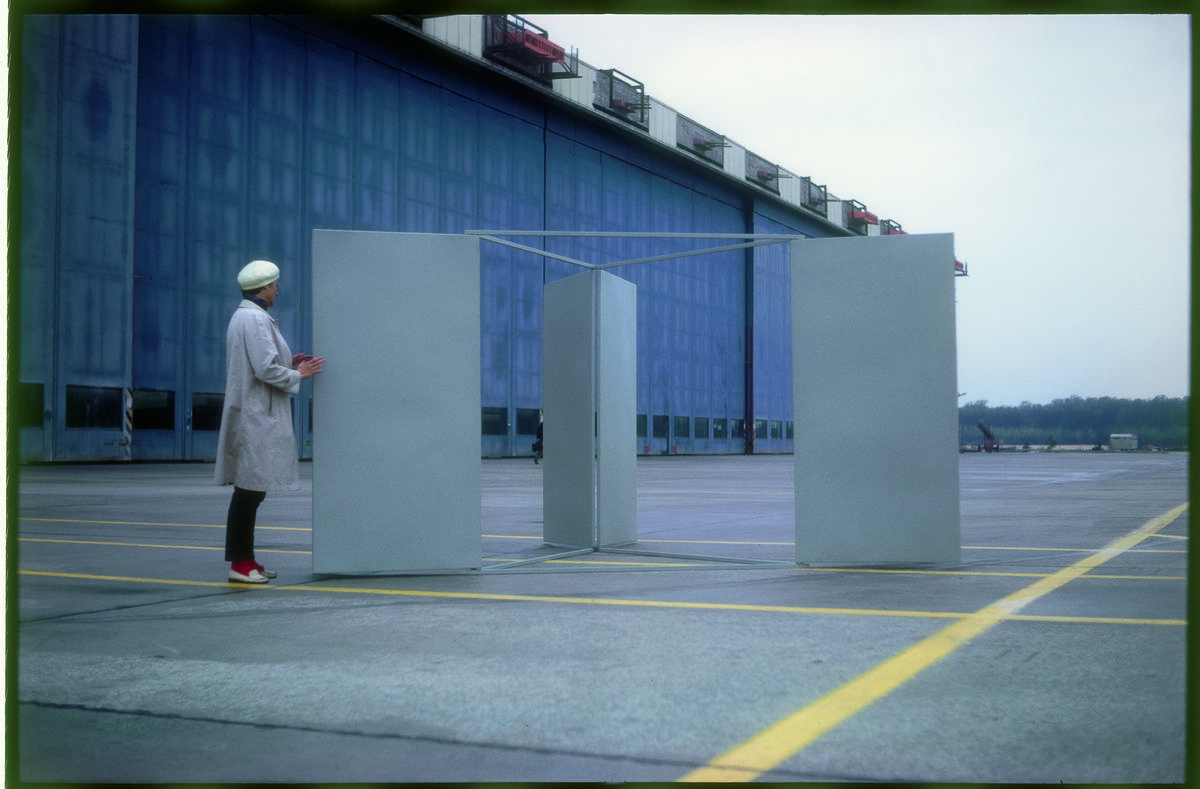 Like many of the American Minimalists, Posenenske was preoccupied with industrial materials and methods of serial production. This devotion to industrial fabrication would lead directly to the subject of her sociological research. She and Brunn’s 1979 dissertation critiqued how factory workers’ labor was assessed through “objective” qualifications. They claimed that these forms of analysis took agency and input away from the workers themselves. Brunn explained that the goal of their research was to identify “how exploitation really works, how a worker’s lifetime is taken away from him and how he eventually becomes a mere accessory to the machine.”
Posenenske’s works went a step further than most in the way they invited participation. During the last two years of her studio practice, from 1967 to ’68, Posenenske created five groups of sculptures with modular parts. “Series B” and “Series C” are relief sculptures in monochromatic shades of red, black, blue, or yellow, which can be installed or hinged in various configurations. “Series D,” consisting of air duct sculptures in galvanized steel, and the “Series DW” sculptures in cardboard can each be assembled any way the consumer chooses. Her final “Series E” (called “Drehflügel,” or “Turning Leaves”) consists of four-sided, human-size sculptures with wings that can be manipulated by exhibition viewers. The scale and interactive nature of these works more closely resemble experimental stage sets than sculptures, and during Posenenske’s lifetime, she installed them in unconventional public locations like an airplane hangar and a traffic island.
In the past decade, Posenenske’s works have been shown in contexts that bring out their performative and participatory qualities. For a 2010 exhibition at Artists Space in New York, the “Square Tubes” were reconfigured on a weekly basis by the curatorial staff and the artists
Ei Arakawa
and
Rirkrit Tiravanija
. Tiravanija, a social-practice art star, installed the works as a series of squat, compact shapes on moveable pallet dollies, and laid down colored tape on the floor in the shape of arrows as indicators for viewers’ movement throughout the space. Artists Space’s curators created one form that looked like a closed upright diamond, and another that snaked low and long across the floor. In an even more experimental project from 2012, the artists Kerstin Polzin and Anja Schoeller arranged for inmates at a youth prison in Ebrach, Germany, to repeatedly reconfigure the “Square Tubes” forms. As one inmate said, “I’m in jail now, but I can change my life, just as I can change how these units are assembled.” 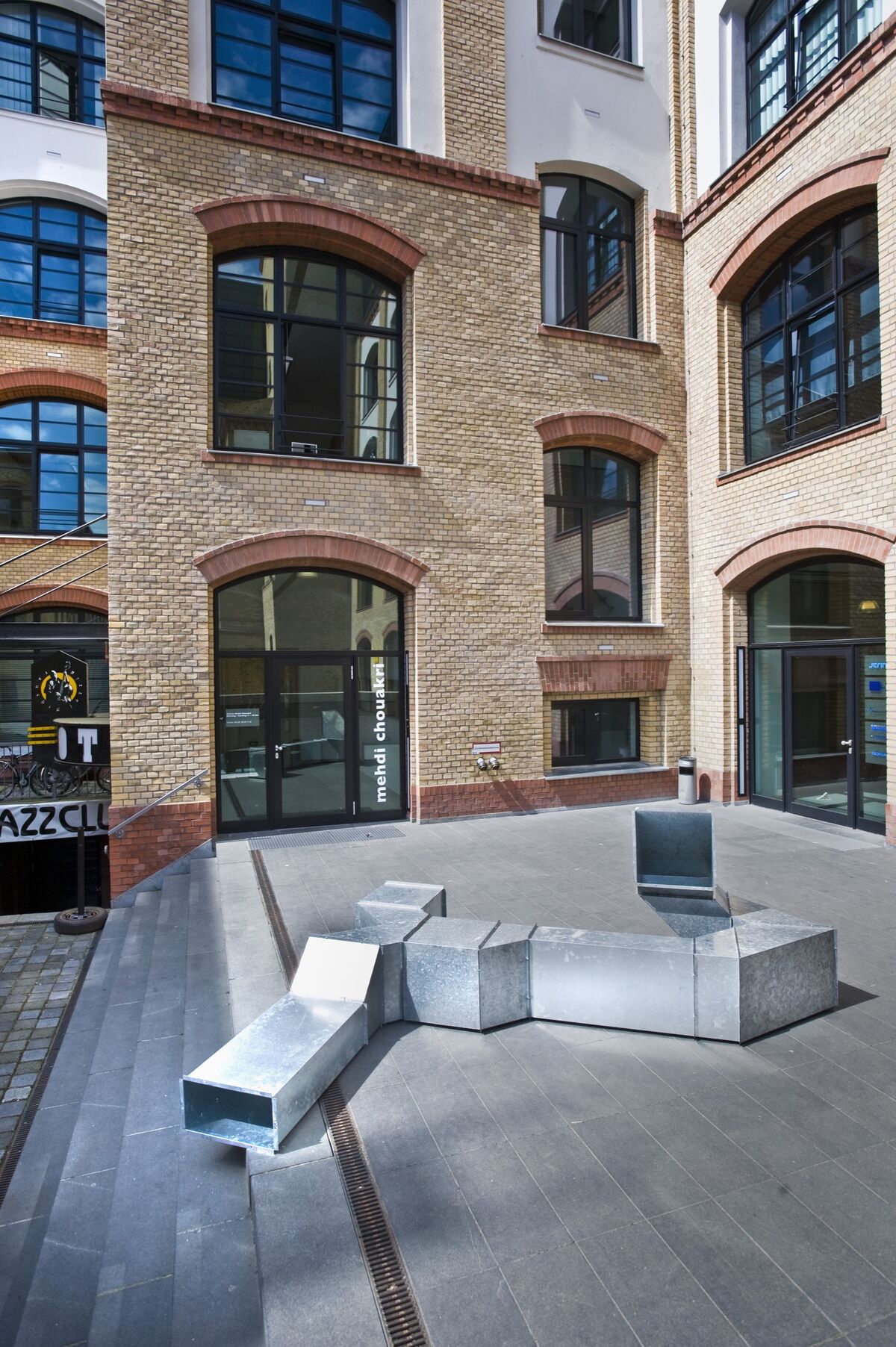 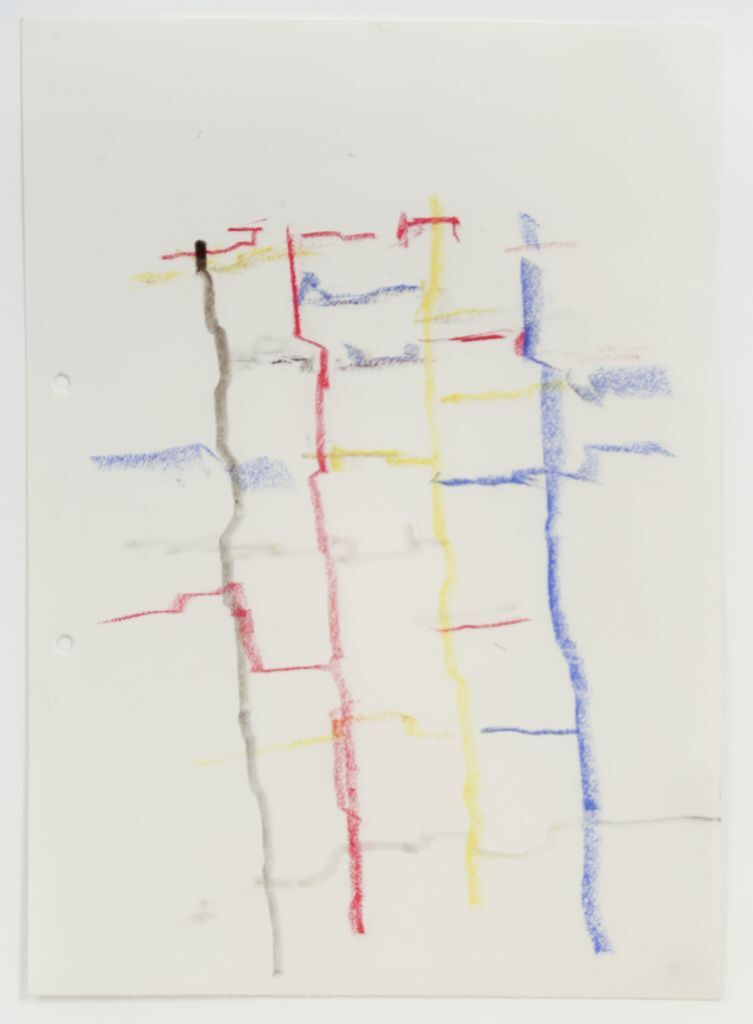 Charlotte Posenenske
Zeichnung (Landschaft) [Drawing (Landscape)], 1962
Peter Freeman, Inc.
Dia’s show will feature two live reconfigurations of “Series D” in May and August. As Lowry explained, Posenenske revisited her art practice just before she died in 1985. In collaboration with her husband, she categorized her original works from the 1960s as “prototypes” and specified that they could only be sold to public institutions. She authorized her estate (run by Brunn) to sell reproductions of the work in modern materials. These can be purchased, like the originals, at the cost of production.
Posenenske’s innovation in creating infinitely reproducible, low-cost artworks is a move that remains radical today. When asked whether the low costs of her work steered away potential buyers, Lowry responded diplomatically, but with honesty. “The fetish for originality and discrete value is undermined by her practice, and it was hard for collectors,” she admitted. “She did have collectors that purchased these works in the 1960s for minimal costs. Some people understood the practice, but the art world just works against that so forcefully.”
Considering her commitment to accessibility, Posenenske’s decision to stop making art can be interpreted as a response to the art world’s obsession with scarcity and high price tags. Lowry understands her 1968 manifesto in this way. “It’s frequently framed as a rejection of art, but in my reading, she’s disillusioned with the art world as a system for disseminating the works that she’s made,” she said. 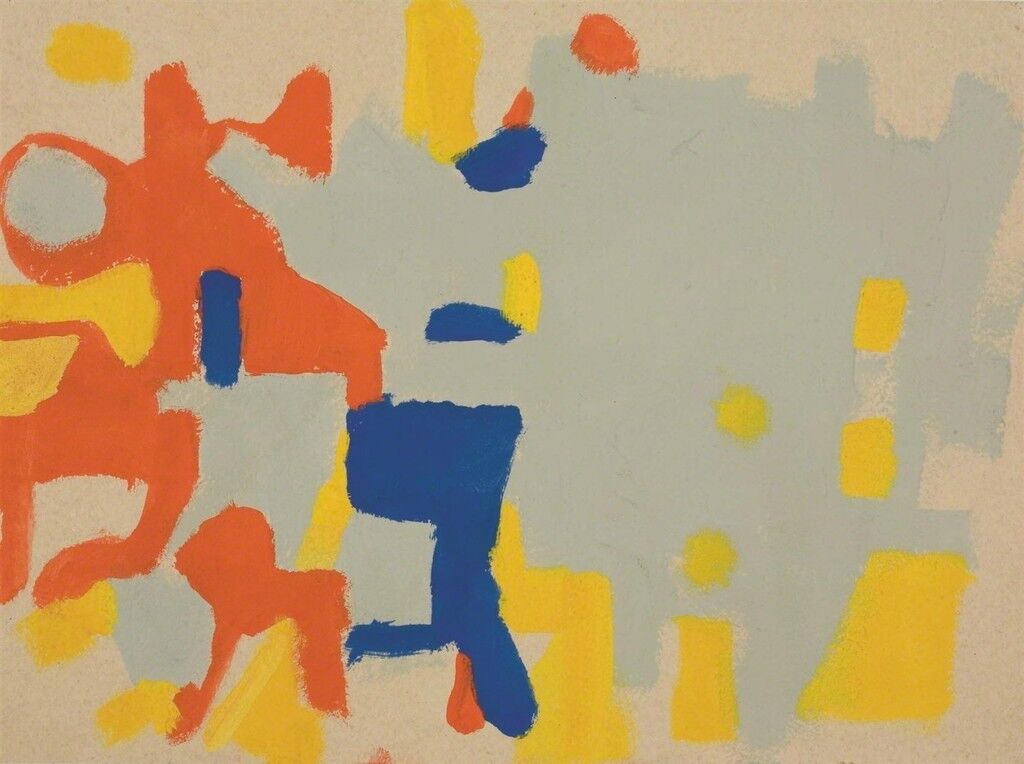 Charlotte Posenenske
CP 119
Gallery Sofie Van de Velde
Posenenske’s exhibition is part of a larger-scale effort for the Dia Art Foundation to create a more diverse and international understanding of Minimalism. Dia has acquired more than 150 newly fabricated elements—the largest purchase by a museum to date—and the exhibition will be presented alongside works by two women who have also recently seen their profiles rise:
Mary Corse
and
Dorothea Rockburne
. Later this spring, Dia will open its first solo show of
Lee Ufan
, a Korean-born leader of the Japanese Minimalist movement known as
Mono-ha
.
Lowry said that Posenenske’s work “changes our understanding of what Minimalism can be.” While so much Minimalist art is predicated on the passive experience of an object in a pristine setting, Posenenske “explodes that idea,” Lowry said. Her work requires the hands-on, active participation of consumers—and in doing so, it breaks down the rigid distinctions between artist, curator, collector, and viewer.
In her lifetime, Posenenske worked against preciousness and the immutability of the artist’s intention. Her work was sidelined for half a century as a result. Today, it represents values that the contemporary art world holds dear: political commitment, innovation, and an interest in how art intersects with larger systems of power.
Wendy Vogel
Related Stories

What Makes a Minimalist Sculpture Good?

11 Female Minimalists You Should Know
Advertisement
Further reading in Art 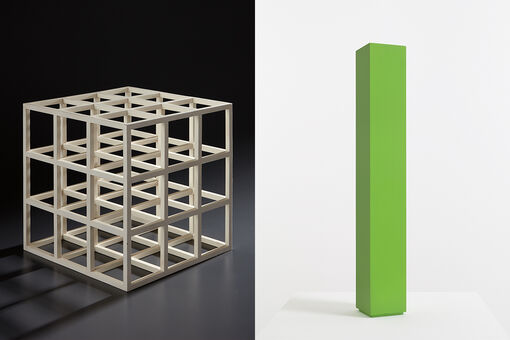 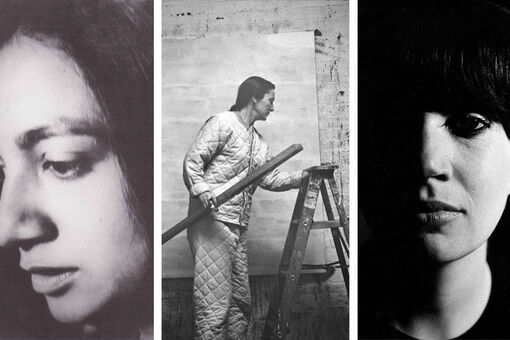