It was at the opening of one of fashion brand Acne’s Copenhagen stores that Simon Friese, now the director of the city’s CHART Art Fair, was approached by V1 Gallery and CHART co-founder Jesper Elg. In appropriate fashion for Scandinavia, Elg was DJing a set at the opening and was impressed by Friese’s job producing the event. Enough so that the fashion and food world native was brought on to manage the inaugural run of CHART. In only two editions thus far, the contemporary art fair has seen its foot traffic more than double and has already become a respected stop on the art world circuit.
Taking place in Copenhagen every August, CHART invites an ever-increasing number of Nordic galleries to participate (28 this year), with an approach—similar to New York’s Independent art fair—that blends an open exhibition layout with an art fair end goal: sales. The fair’s program is a refreshing one that touts unity instead of cut-throat competition. Its calling card, says Friese, is an international collector program that pools together all the participating galleries’ client bases into a shared collector group that all dealers have access to. Additionally, the fair hosts events that bring together the city’s active creative community—from architects to musicians to restaurateurs—into one (quite impressive) space, the palatial, 17th-century Kunsthal Charlottenborg.
By all accounts, Friese—along with the fair’s five founding galleries—Galleri Susanne Ottesen, Galleri Bo Bjerggaard, V1 Gallery, Andersen’s Contemporary, and David Risley Gallery—has successfully spun the usual art-world opacity into an art fair model that is not only inclusive but also, dare we say it, fun. 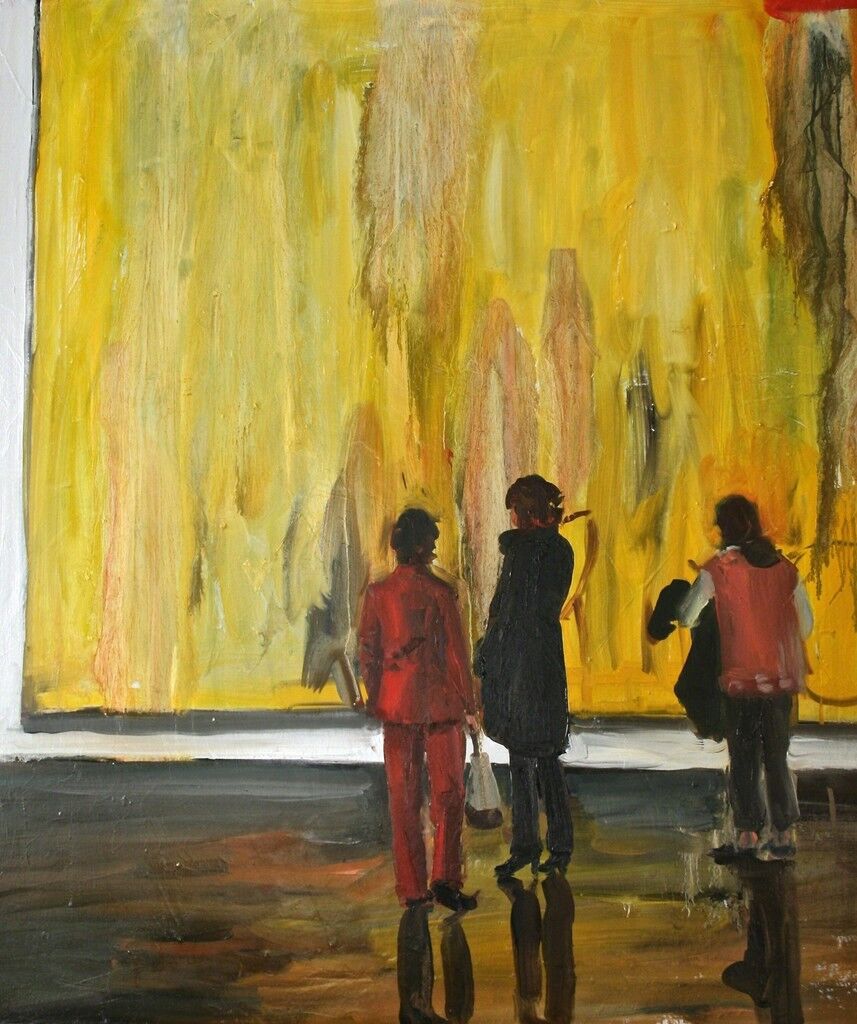 Anna Bjerger
Abstract Expressionism, 2015
David Risley Gallery
Marina Cashdan: When did you become involved with CHART and what were you doing before?
Simon Friese: I’ve been involved in CHART since it started in 2013. The first two years I started off as the Operating Manager, [overseeing] everything regarding logistics, construction, building up, talking to all the gallerists about what they needed, and also talking to all of the sponsors on how to do collaborations. I have always had a lot of interest in [art] but my background is mainly as a manager in the gastronomic business,
and [producing] events in the cross between the fashion world and the art world. I did some work for the fashion brand Acne, and I was working on an opening for two of their new shops in Copenhagen, and Jesper Elg, who is one of the owners of CHART, was actually djing there with Trentemøller, who is a world-renowned DJ. And I think Jesper just liked the way it was handled. They had four months before the fair was opening the first year, and they asked me if I could take over.

MC: What are some of the biggest differences and similarities in working in the art world versus the fashion world?

SF: The similarity is the whole production and the high standards. But what’s totally different is that you’re working with the artists, and that’s what I really liked about it, because you never know where it ends. It starts one place and then it ends somewhere totally different.

MC: How would you describe the Copenhagen art scene? Is there a high concentration of artists living in the city? Are there a lot of collectors?

SF: In answering this question I need to start by talking about why CHART was actually established because that’s very much one of the reasons for it. For the last seven to ten years there’s been much attention to the artists and galleries coming from the Nordic region. But there was not a platform that motivated people to travel to the Scandinavian countries or the Nordic countries to actually see the art pieces; Danish, Swedish, Norwegian, Finnish, and Icelandic galleries had to travel to another fair, like for instance going to The Armory Show in New York and showing your pieces there. So the ambition to do CHART in the first place was actually to make a platform that had the curatorial level to be able to attract an international audience coming here to the home ground of the artists and for the gallerists to not only show Nordic artists, but also show internationally renowned artists at the fair.That was also why we just decided to focus on inviting galleries instead of having an open invitation.

MC: What’s the criteria for invitation? Has the number of galleries invited changed over the last few years?

SF: I can’t say that there is a specific criteria. We invite galleries that have a high artistic standard, an interesting program, and an international presence. This year there are 28 galleries, still only galleries from the Nordic region, and we’ve had some who were there the first year and who weren’t there the second year, who are back this year. But each gallery doesn’t have their own “classic” booth; we try to build as few walls as possible, meaning that if we have three galleries in one room we try to work together. Of course we know what [the galleries] want to present at the fair, and then we try to divide it so that each fits with one another. The only thing that actually divides the booths is modular furniture that we designed in collaboration with Danish design brand called Montana. I think the only [other] place you see this is at the Independent fair in New York. 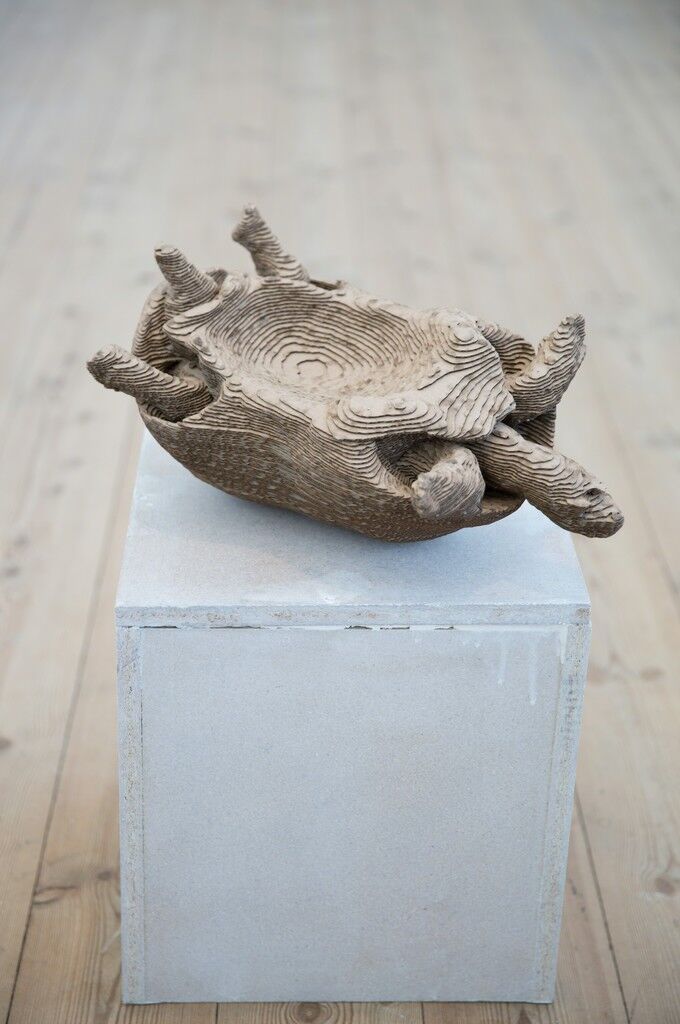 Martin Erik Andersen
Testudo Tabulata/Pyx, 2015
Galleri Susanne Ottesen
Advertisement
MC: Yes, I was going to ask if Independent was a model for CHART?

SF: Yeah, it is similar, but if you see the surroundings of CHART—which is held inside Kunsthal Charlottenborg—the space is totally different. It’s an old palace from the 1600s, so it’s really special. The architecture is amazing for presenting art, so you really don’t feel like changing the existing dynamic.
MC: What have you learned the most about the Copenhagen art scene since joining the CHART team?

SF: Oh, a lot of things. For galleries that want to run an ambitious business in Denmark, I think they still have to look outside the borders of Denmark and try to get an international clientele built. So maybe there are 20 serious galleries in Copenhagen and all of them are trying to participate in fairs around the world, to find an audience there, because otherwise it would be really hard to run a business that you could actually live from.

MC: Primarily because there’s not a high enough concentration of contemporary art collectors in Denmark?

SF: Exactly. I think it’s still really important for them to look outside of Denmark. And that’s also what we’re doing with CHART, trying to get some attention to not just seeing galleries from Denmark at other fairs, but bringing an audience to the home of the artists that are presented from the Nordic region.

MC: Are the collectors that come to the fair primarily international collectors?

SF: The idea is to establish an international art platform for the Nordic region. The [approach we have] is different from other fairs: The whole fair is built on the idea of collaboration. Everybody shares what they have—all the participating galleries bring in their important clients and the collectors participate in the same program during the fair.
MC: So the thought is if you’re sharing the wealth, you’ll likely reap more benefits in the end?

SF: I think it’s not only the collector’s program that’s built on this, it’s actually the whole idea of the fair. I mean, we work with commercial partners but all the partners are very much involved with the fair. They participate in realizing projects for the fair’s social program and thus invest both time and money. For instance, like the Montana project, which is a Danish furniture company; they are producing furniture for the whole fair and doing bars and designing all of this.
Of course art is the main focus of CHART but we’re trying to actually engage with all the other creative businesses that sometimes are involved with art: architecture, gastronomy, design, and music. So in the two big courtyards of the palace, we’re doing an architecture contest with the Danish companies FOSS and HAY. The contest includes four academies from the Nordic regions and the main judge is [architect] Bjarke Ingels. So everything we actually do with our partners is trying to unite and stand together, and just making a platform that’s interesting to visit for an international and local audience.

SF: This year we’re doing a non-commercial public program called CHART Social. We’re working with the municipality of Copenhagen on this and we’re working with several foundations that normally don’t support commercial activities. So that’s kind of rare, that we have an art foundation that supports the project as well and the Nordic Culture Fund. We’re also working with Altan.dk, a company focused on building balconies for houses. There’s a performance program curated by Francesca Gavin, which is free to participate in and it will be five to six performances—five of them are from Scandinavia and the last one is from a British artist. We have a talks program together with [ArtReview Editor in Chief] Mark Rappolt. And for CHART Social we’re [also] doing an opening concert series, which is free for the public to attend. It’s kind of interesting to have an art fair that ends up in a pretty big concert with 5,000 people in the courtyards. That’s something.
MC: Would CHART ever expand into other Scandinavian cities or take place more than once per year?

SF: I don’t think that we would do something similar at another time of the year; I think we would maybe just try to do something more at the same time in another location in Copenhagen. We will definitely work much harder on expanding, especially our CHART Social program to be  able to open up more of the city—also expanding projects like talks, performances, or maybe large-scale art projects. Everything we do, whether it’s a collaboration with a partner or a gallery, it’s always focused on finding the best for the fair and its audience.
Marina Cashdan is Artsy’s Head of Editorial and Creative Director.
Explore CHART Art Fair 2015 on Artsy.
Related Stories