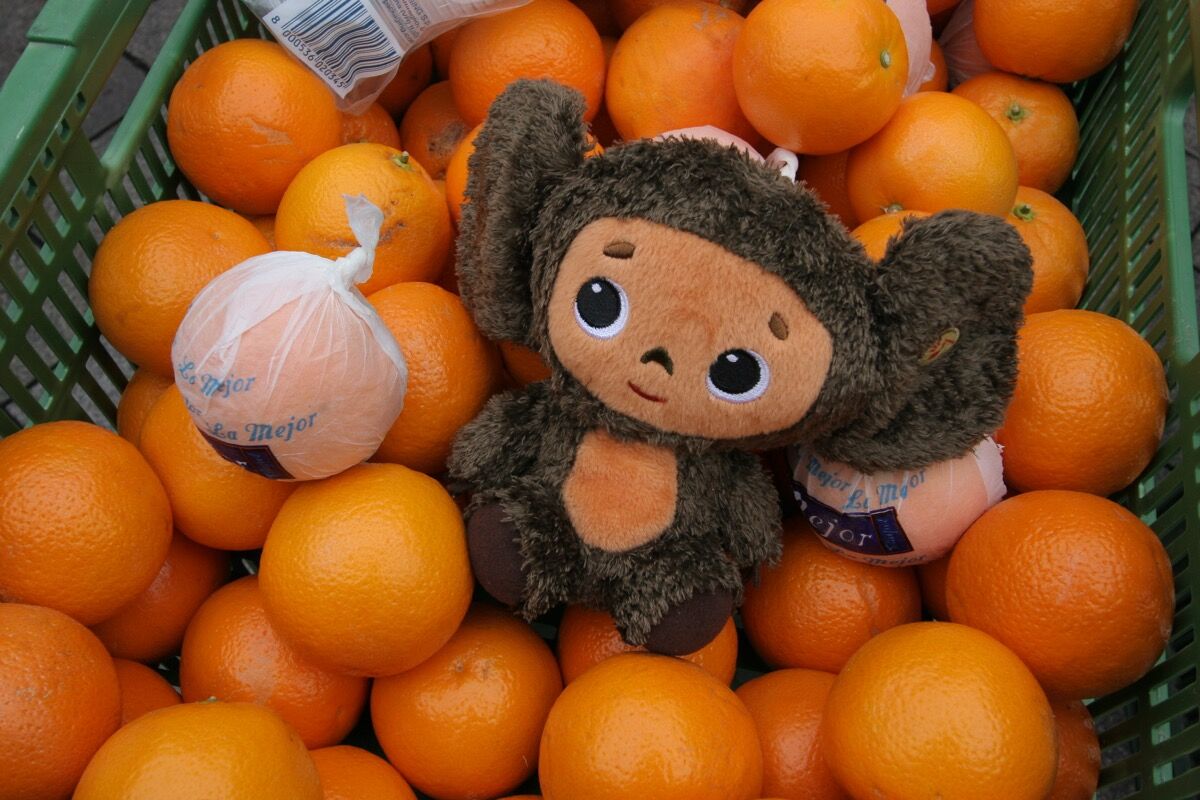 A Cheburashka plushie in a crate of oranges, 2009. Photo by Steven River, via Flickr.

In America, the beloved cartoon character Mickey Mouse has had nearly a century of shows, books, films, amusement parks—and now an upcoming exhibition—to make a lasting impression across generations of children. But in the U.S.S.R., the national treasure Cheburashka, a small, brown, furry creature of unknown origin, was only featured in one book and four short films—a total of 70 minutes over 14 years.
Despite his small footprint, Cheburashka, who was created in 1965 by the recently departed cartoonist Eduard Uspensky, survived the collapse of the Soviet Union and continued to be a beloved icon in Russia—and, over the decades, he became an international icon, as well. The character has starred in far-flung spinoffs and a major motion picture, been present at political protests, and even had a rocket launcher named after him.

“Ask any person who grew up in the Eastern bloc about ‘the Soviet Mickey Mouse’ and they will likely break out in song in Cheburashka’s cloyingly naïve voice,” an article in Tablet magazine asserted, repeating the character’s song: “I was once a strange no-name toy, whom no one wanted in the store and now I’m Cheburashka….” (Note: This writer can confirm her Kazakhstan-born husband has done just this.)
But Cheburashka, who Uspensky called “a still-undiscovered orangivore animal,” was an unlikely star. The protagonist of his story was actually a gentleman crocodile named Gena, who wore a red smoking jacket and worked in a zoo (as a crocodile). In the first short film from 1969, for which Uspensky wrote the screenplay, Cheburashka, a supporting character, was discovered by a fruit-stand owner in a crate of oranges. His name was derived from the archaic Russian verb cheburakhnutsya, which means “to topple”—as he did, when the owner sat him on the edge of the crate, thanks to his trademark oversized head and round ears.
The owner took Cheburashka to the zoo, but after the zookeeper rejected him (saying he didn’t know which cage to put him in), he took refuge in a phone booth. Meanwhile, Gena, who was profoundly lonely, had posted a sign seeking a companion. Cheburashka answered, and a friendship was born. The second film, released in 1971, was titled Cheburashka, followed by 1974’s Shapoklyak and 1983’s Cheburashka Goes to School. 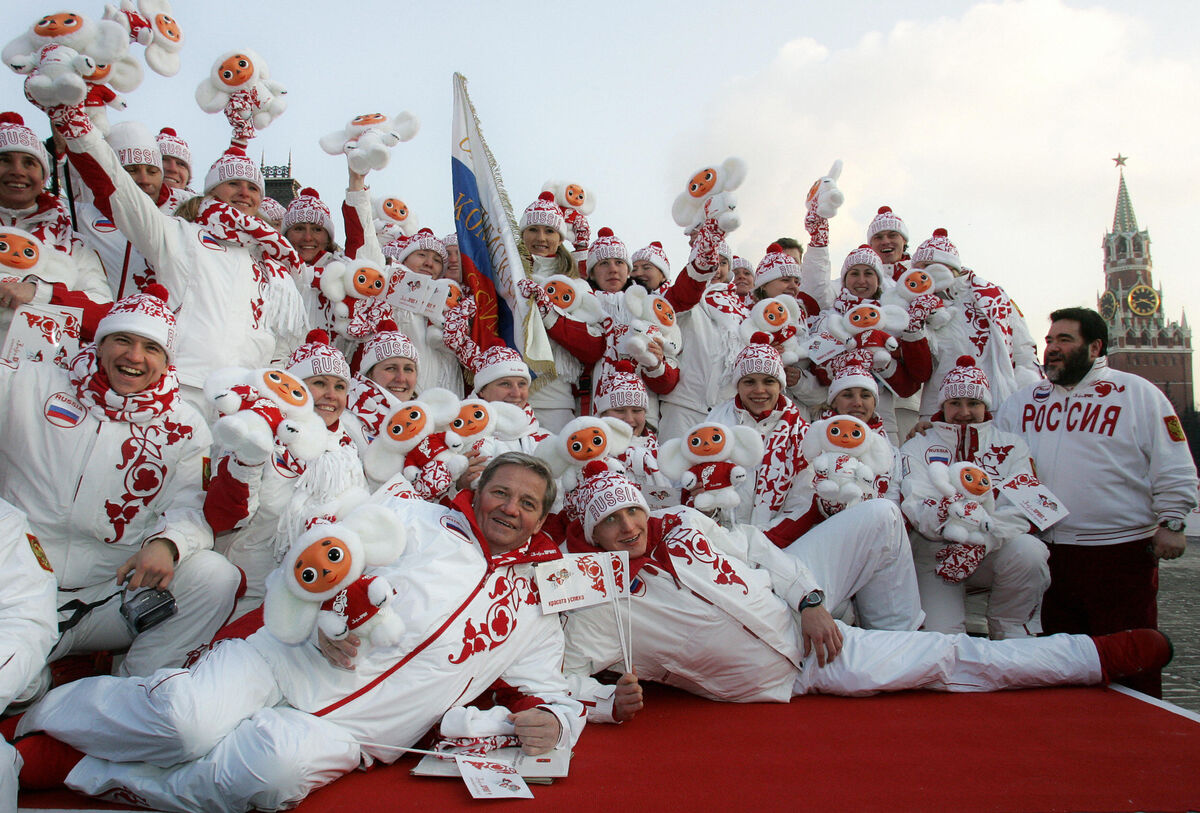 Members of the Russian Winter Olympics team wave holding its talisman, Cheburashka, a hero of the popular Russian cartoon film during a farewell ceremony at the Red Square in Moscow, Russia, 2006. Photo by STRINGER/AFP/Getty Images.

If you visit Russia today, you’ll see Cheburashka’s image in plush form, as a matryoshka nesting doll, and on T-shirts as “Che Burashka,” riffing on the revolutionary Marxist Che Guevara. Bronze statues have been erected in his and Gena’s likenesses in the towns of Ramenskoye and Khabarovsk, and Cheburashka was named the official mascot for the Russian Olympic team from 2004 to 2010, for which his brown fur was changed to a more patriotic white, followed by red, then blue.
But Cheburashka’s teachings about friendship have reached well beyond former Soviet states, to Europe and East Asia. Uspensky’s original 1965 book, Gena the Crocodile and his Friends, has been translated into over 20 languages. Cheburashka is known as Muksis in Finland, Plumps in Germany, and Topple in the U.K. He’s named Drutten in Sweden, where he and Gena starred in a hand-puppet spin-off show in the 1970s and ’80s. In Japan, where kawaii (cute) creatures reign, Cheburashka became a cultural phenomenon in the 2000s, inspiring a new Japanese-produced series of shorts in 2009, followed by a full-length feature film in 2010; the latter is part of the Ghibli Museum Library.
Cheburashka’s legacy has persisted because of the universality of his message—where you come from doesn’t matter, it’s kindness that’s important—but also because of Uspensky’s legal smarts. He copyrighted Cheburashka’s name and image and sold the rights to other countries, even approving the scripts for the Japanese productions. However, that came with legal hurdles: He and art director Leonid Shvartsman, who reportedly conceptualized Cheburashka’s most distinctive features for the original film, took at least one of their heated battles over Cheburashka’s image to court.

Cheburashka mascot in a shopping center in Japan, 2015.

In addition to his appearance in the Russian court system, Cheburashka has become a political player abroad. Items that resemble his face are often nicknamed Cheburashka—most notably, the An-72 jet—but that extends to people who bear a likeness, too, such as the former Armenian prime minister Serzh Sargsyan, who resigned in April following a series of national protests that erupted over his bid to retain power. During the protests, Armenians carried dirtied Cheburashka toys, and at least one person lit his aflame, thrusting the burning effigy above his head. In one rousing rally, a protester in full Cheburashka costume took the podium in a satirical performance as Sargsyan.
Less than three months later, in June, Ukraine separatists in the Donetsk People’s Republic publicly introduced the multiple-launch rocket system Cheburashka, which had been named as early as 2015, in response to a Russian military rocket launcher named after the Tolstoy adaptation of Pinocchio. The DPR armored vehicle features Cheburashka’s likeness in a disturbing manner: Not only is he human-sized and in uniform, he’s holding an assault rifle.
That version of Cheburashka is a far cry from Uspensky’s original character, which he described as having “cuteness, heightened fluffiness, and ear-endowment,” and being “incredibly energetic despite general cluelessness.” But like his origin, his character has become open to interpretation. Cheburashka has evolved beyond his simple roots to represent national pride, or the apogee of kawaii culture, or political punchlines. But, as with most public figures, the legacy becomes larger than the person. Or, in this case, the furry orangivore.
Jacqui Palumbo is a contributing writer for Artsy Editorial.
Related Stories

How “BoJack Horseman” Illustrator Lisa Hanawalt Is Shaking up Animation

How MTV Has Radically Reinvented Its Look over Nearly Four Decades 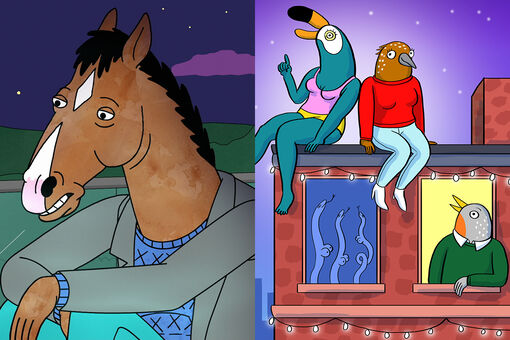 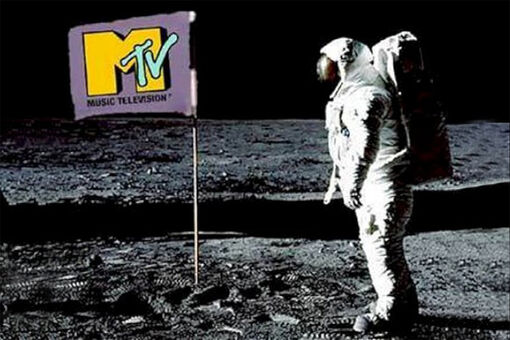