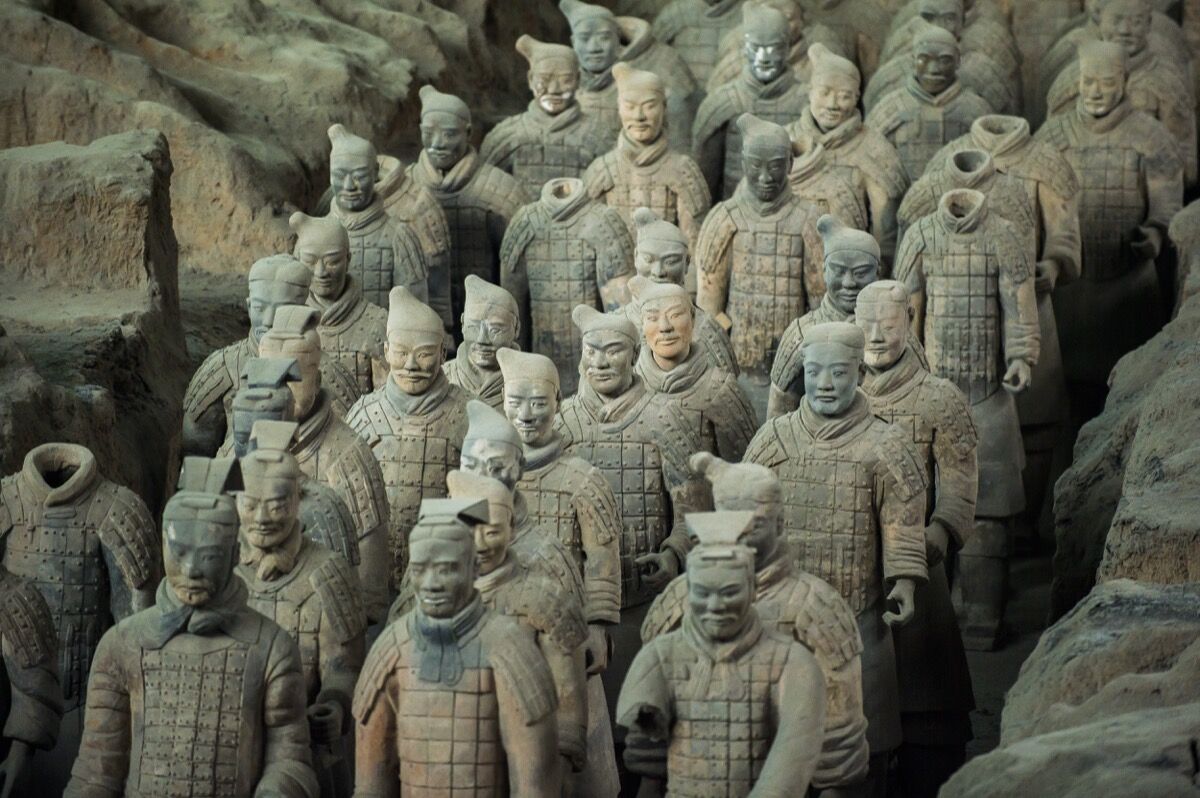 In 1974, Chinese farmers stumbled upon fragments of a life-size clay sculpture buried beneath the ground just outside Xi’an in central China. The government-appointed archaeologists who continued the dig gradually unearthed the largest trove of underground sculpture the world has ever seen. Their extraordinary findings continue to offer crucial insights into the country’s history and evolution.
Throughout 22 square miles of subterranean landscape, they discovered over 7,000 terracotta sculptures—men in warrior attire standing in rows; an army ready for battle. Most astoundingly, each sculpture is clearly differentiated. Their facial hair is unique (some sport top knots or mustaches), as are the positions of their arms (raised; at their sides; hands folded) and even their headgear.
The archaeologists determined that the warriors are located next to the burial site of China’s first emperor, Qin Shi Huangdi (ca. 259–210 B.C.; his name means “the First Emperor of Qin”), and were built to protect their ruler in the afterlife. 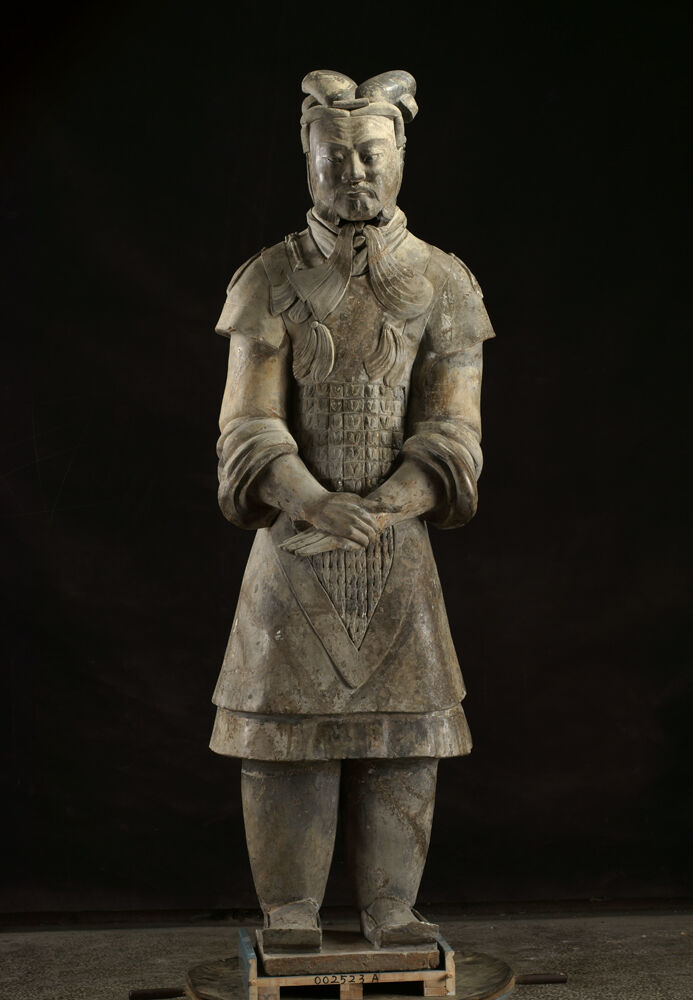 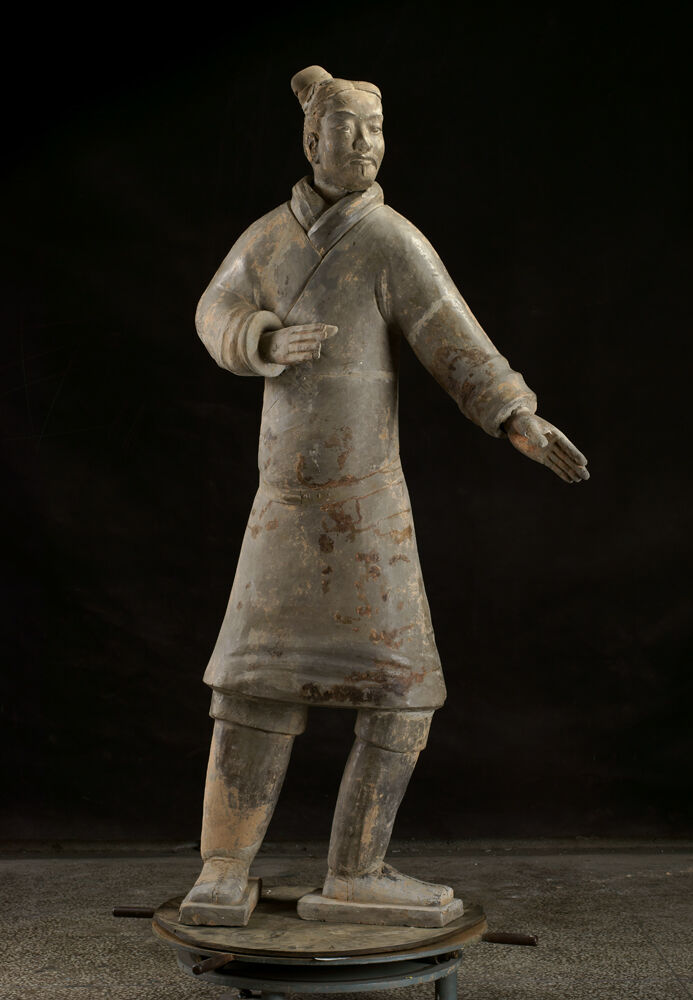 The burial complex itself comprises a vast landscape. At its center rests the emperor’s tomb. Historical writings describe underground palaces and cities replete with “rivers” of mercury running through a bronze landscape, and artificial birds that promise both a vibrant natural world and imperial architecture in the afterlife. Although archaeologists have left the tomb untouched for fear of damaging its contents, modern tests have revealed unusually high concentrations of mercury, bolstering these accounts.
Chillingly, however, a sprawling chamber around the mound contains the skeletons of craftsmen who worked on the site, along with murdered princes, sacrificed animals, and convicts who are still bound in chains. A rectangular wall surrounds these central structures and mass graves, with the Terracotta Army submerged less than a mile away.
In its entirety, the trove illuminates particulars about life in ancient China and Qin Shi Huangdi’s enormous accomplishments. By 221 B.C., the emperor united a series of warring states into a single political unit: the beginnings of modern-day China. (Extending west from the Yellow Sea, the kingdom was still a fraction of the country’s size today.) During his reign, Qin began constructing the Great Wall, standardized currency and weights throughout the empire, and evolved the written language into contemporary Chinese script. 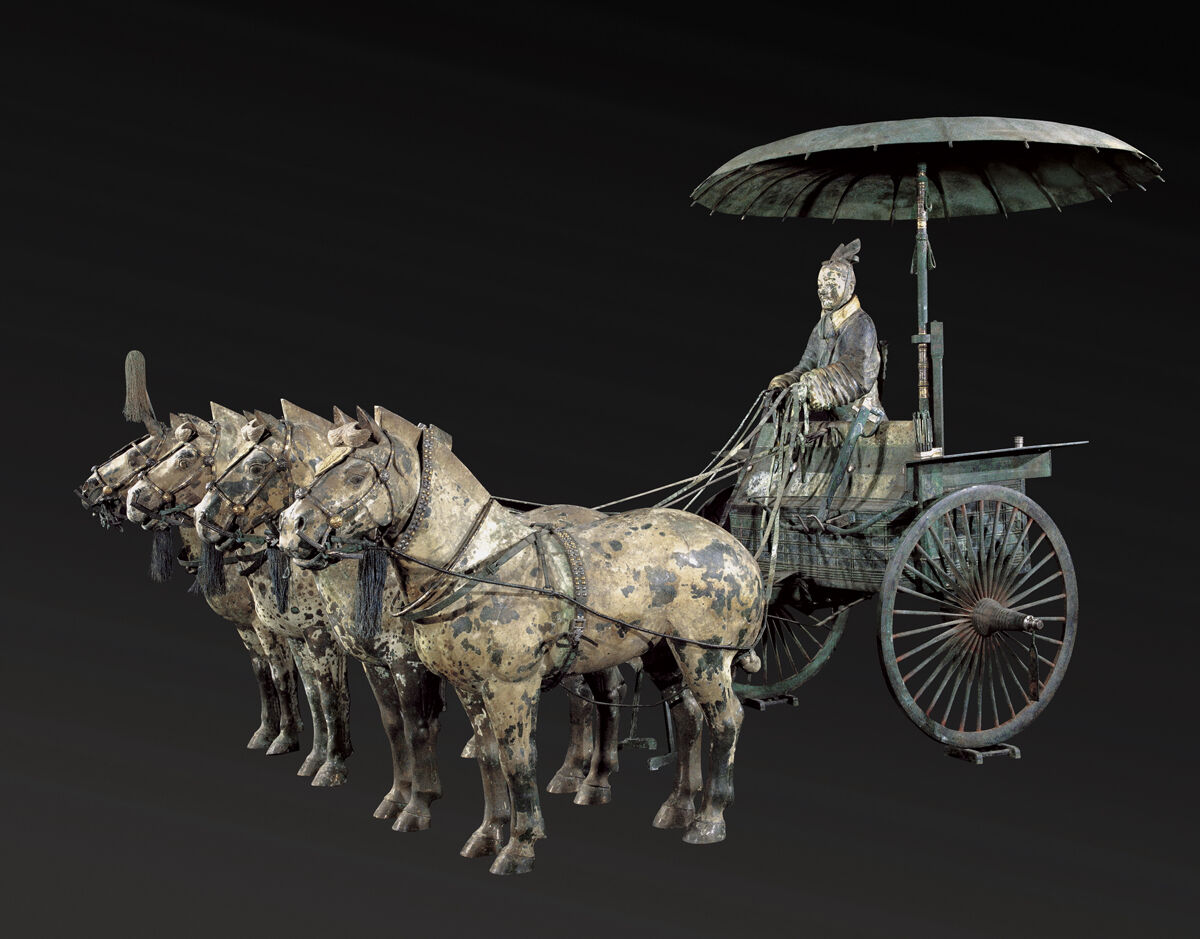 Chariot No. 1 with Horses (replica), Qin dynasty, 221-206 BC. Courtesy of the Cincinnati Art Museum.

Advertisement
Unlike the Terracotta Army, Qin’s dynasty did not survive long past his death. Infighting among his heirs and power-hungry advisors ensured that his son, Emperor Qin Ershihuang—who was directed by a scheming political advisor, Zhao Gao—ruled for only three or four years before civil war wracked the country, ultimately leading to the emergence of the Western Han Dynasty. Still, Qin’s legacy lives on: China’s name derives from his own. Indeed, modern China owes much of its ancient, founding accomplishments to the ruler.
Contemporary scholars view the Terracotta Army as a model for how Qin Shi Huangdi prepared his formidable troops for battle and was able to unify the city-states. “We can see his military organization, the different ranks of the warriors,” said curator Hou-mei Sung, who co-organized the exhibition “Terracotta Army: Legacy of the First Emperor of China,” currently on view at the Cincinnati Art Museum through August 12th. “We can see what kind of a chariot he rode and the structures of the tomb,” Sung continued. “It reflects his lifetime palace.”
The Terracotta Army and its surrounding objects also offer insight into craft practices throughout the Qin Dynasty. Workers began constructing the emperor’s tomb when he first rose to power at 13 years old. Over a timespan of 38 years, more than 700,000 workers contributed to the massive building project (many of whom are buried in the mass grave within the complex). Each of the terracotta soldiers required the laborers to fire individual pieces—hats, body parts, armor—separately. The chariots are so complex and fragile that they are not allowed to leave China. For her show, Sung used a replica instead, comprised of about 3,000 individual pieces. 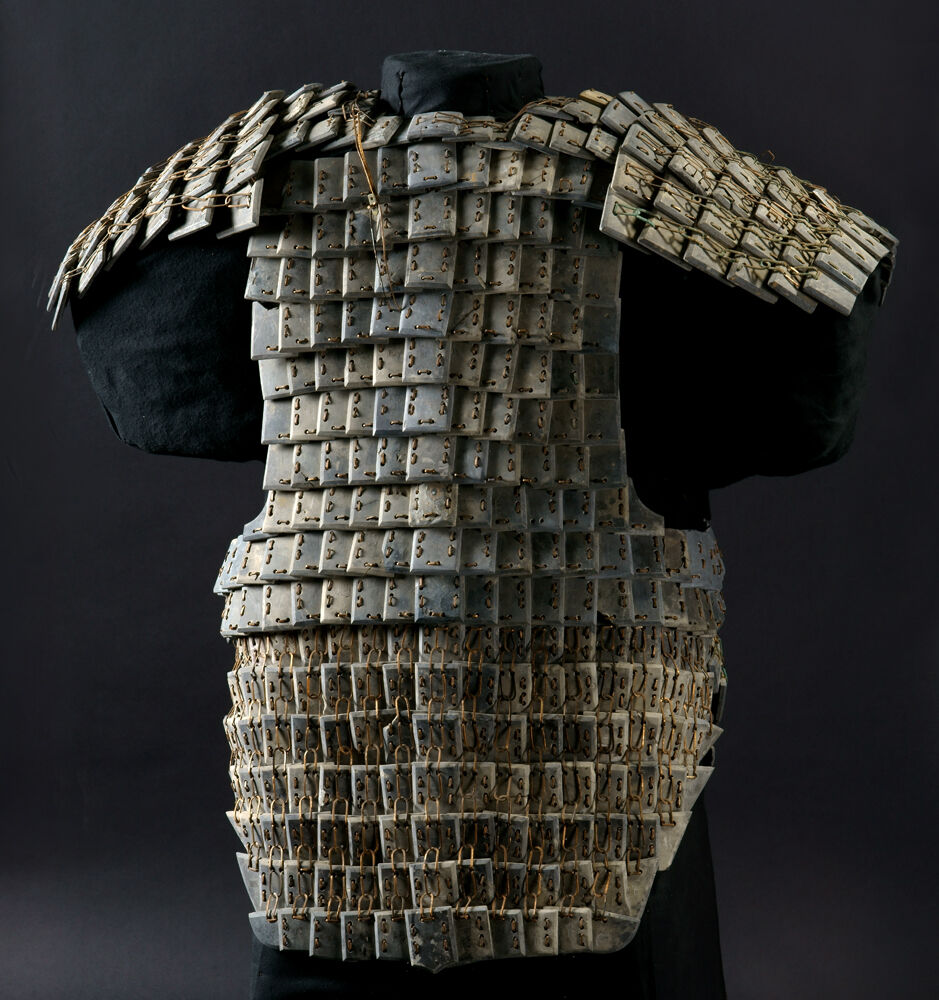 Armor, Qin dynasty, 221-206 BC. Courtesy of the Cincinnati Art Museum. 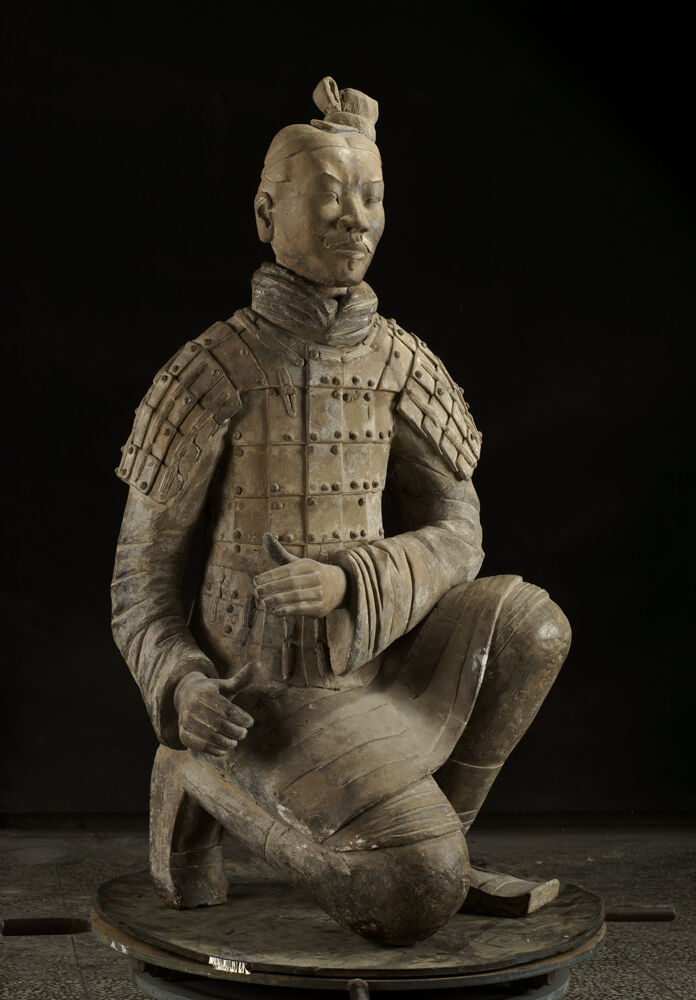 “These works are really amazing for that time, without modern technology,” Sung explained. Metallurgists coated the army’s swords with chromium oxide, a strategy, Sung said, “to preserve, to prevent corrosion, and to strengthen the metal”—methods that predate similar modern technologies by over 1,000 years.
It was only in 1920 that scientist George Sargent popularized the method of chrome plating that now keeps our silverware and bathroom fixtures from rusting. Though Sung suggested that the Qin Dynasty knew about this method of chemical conservation, the Internet is still debating whether there’s another explanation for the remarkable preservation of the swords after millennia spent underground.
Although this project required skilled labor, monetary investment, and a tremendous workforce, the intended audience for these objects—as with all funerary art—was not the living, but the dead. “There have always been some images…not designed to be seen at all,” wrote Mary Beard about the Terracotta Army in her 2018 book How Do We Look. New research suggests that even 34,000 years ago, hunter-gatherers were creating crafts specifically for burials, adorning their dead with beads. 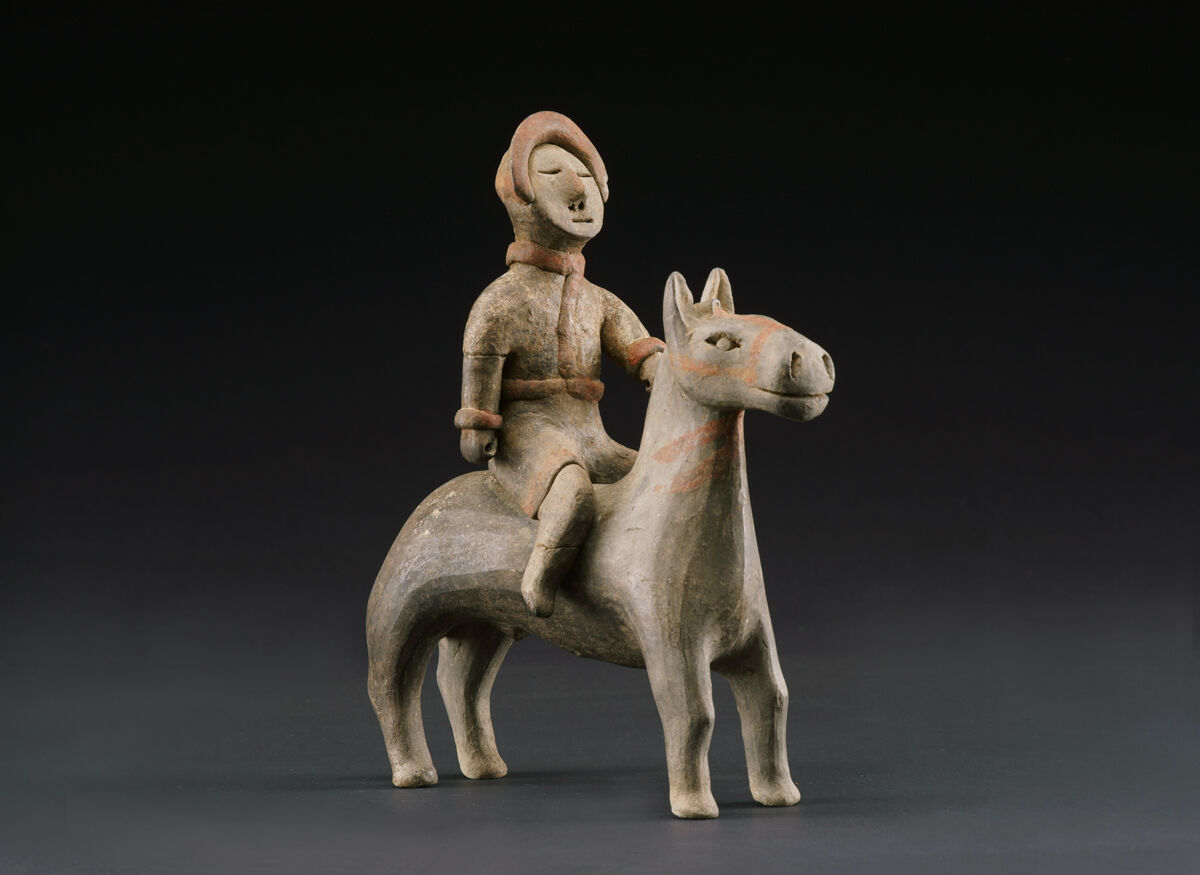 The relics around Qin Shi Huangdi’s tomb suggest that the ancient Chinese believed in an afterlife with many of the same trappings as their lived experience: The emperor would still need extensive military protection, along with animals and entertainers (clay musicians and acrobats were also discovered) after he died. Based on these artifacts, the next world contained war and boredom, too.
As archaeologists continue to excavate the site and uncover more evidence about how the Qin Dynasty functioned, additional insights—and mysteries—promise to emerge.
Alina Cohen
Related Stories