Christian Falsnaes Wants You to Slow Dance with a Stranger 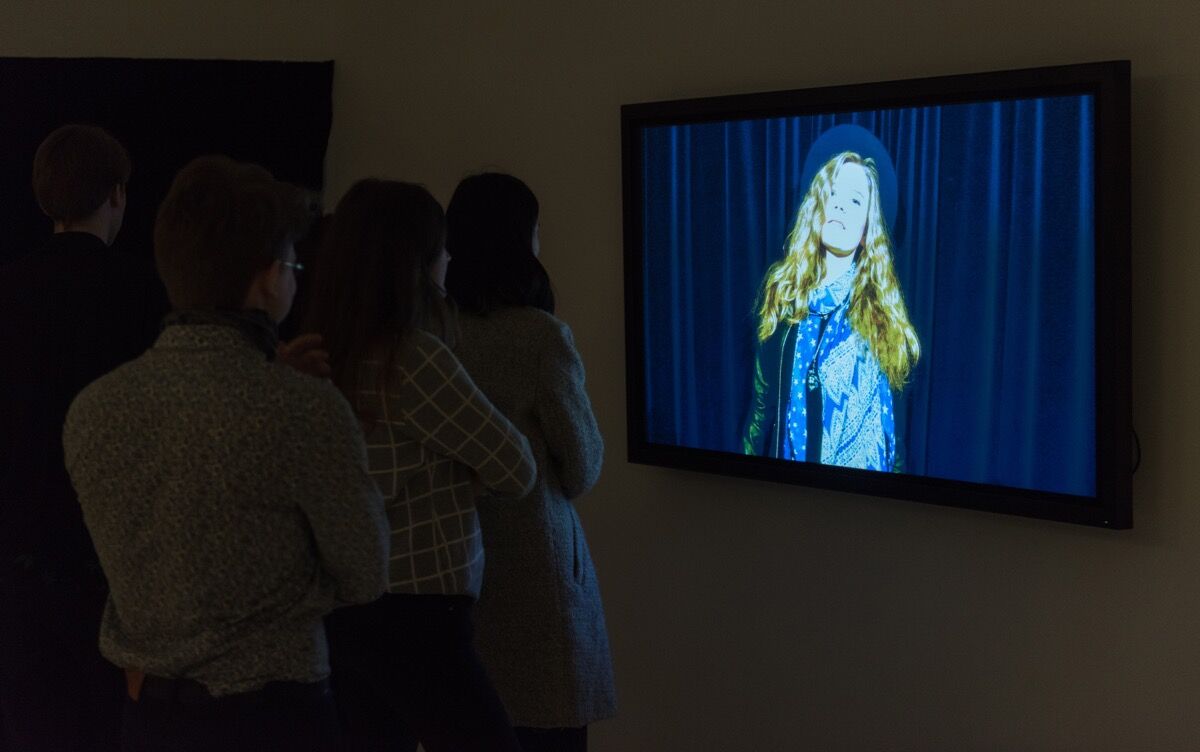 “Explore this person’s body,” the voice says. I am standing in a dark room in Venice and, along with a half dozen or so other strangers, I am laying hands on another stranger whose expression is akin to that of a highly caffeinated deer in headlights.
I can tell exactly what her expression looks like because her face, in extreme close-up, is being projected, live, on a large screen at the front of the room. We, the strangers, awkwardly allow our hands to traverse her shoulders, neck, back. In the background, a swooning synth soundtrack loops and loops. I did not sign up for this, I am thinking. But for that matter, I don’t even know what this is.
The piece I had stumbled into was by
Christian Falsnaes
, a Danish artist currently based in New York (for an ISCP residency), who was shortlisted for the Future Generation Art Prize. It’s called Feed and, like most of Falsnaes’s output over the past few years, it’s an interactive
performance
that puts the onus of success on semi-unwitting participants. A trained interlocutor riffs off a script developed by the artist, shepherding viewers into various configurations and activities. It’s like a corporate team-building exercise conceived by Miranda July and funded by a 1960s-era self-actualization commune that may or may not be an actual cult. 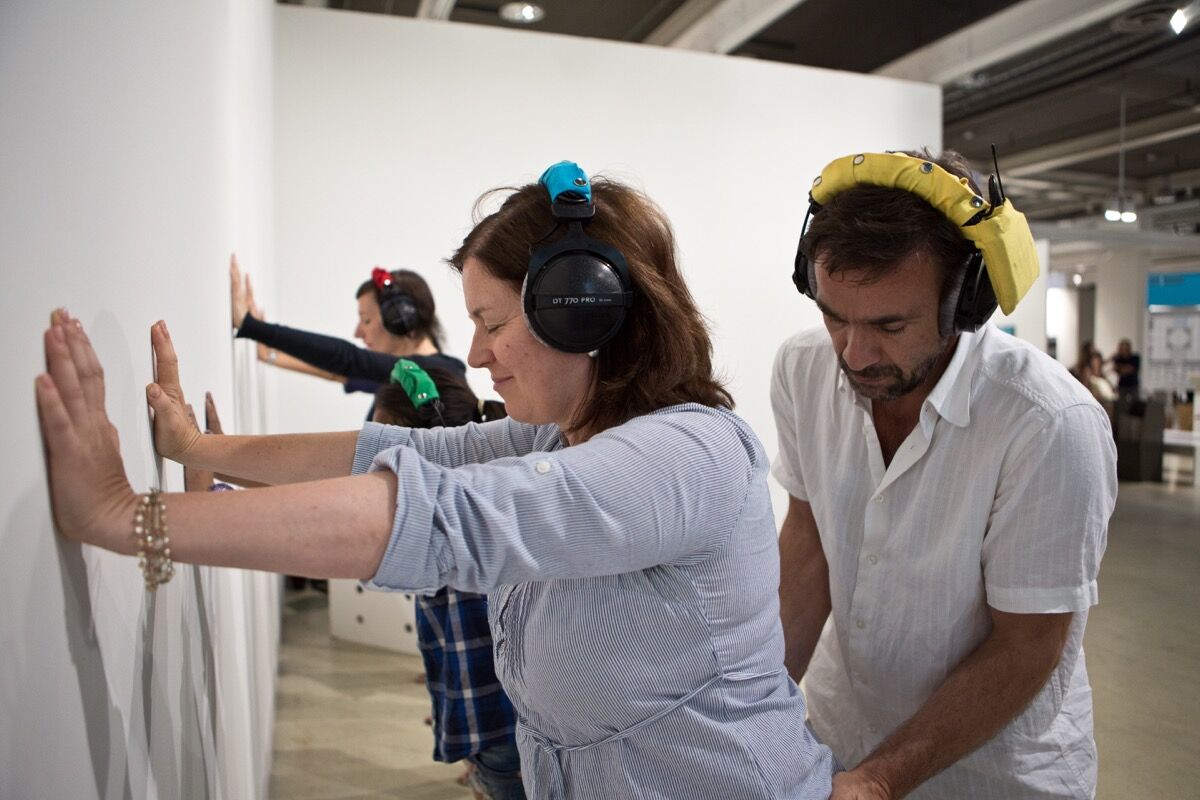 Returning to the piece an hour or so later, I’m asked to stand across from a different stranger and make direct eye contact. We’re told to move closer to each other. Then closer still. Then closer still, until we’re basically smashed up against each other; the stranger and I—“don’t stop looking into each other’s eyes,” the voice says—are then asked to embrace. Meanwhile, a video camera hovers inches away, blaring harsh lights. Put your arms around each other, we’re told. Now start slow dancing, we’re told. So we do.
If you’ve never slow danced with a stranger in a dark room at the behest of a confidently seductive voice over, let me tell you: Time slows down. Significantly. Time becomes a thick syrup that you awkwardly bob through, like two nervous dopes at a middle-school dance during the spoken-word portion of a Boyz II Men song. It’s exhilarating and horrifying.
People blame the art world for being elitist, often sterile; for being a supposedly hermetic, closed cube that repels outsiders. This is often true. But that’s what makes these outliers that much more substantial—moments like this one, in the dark, unmoored, following orders in a way that seems simultaneously illicit and oddly soothing. What, exactly, had just transpired? And how? 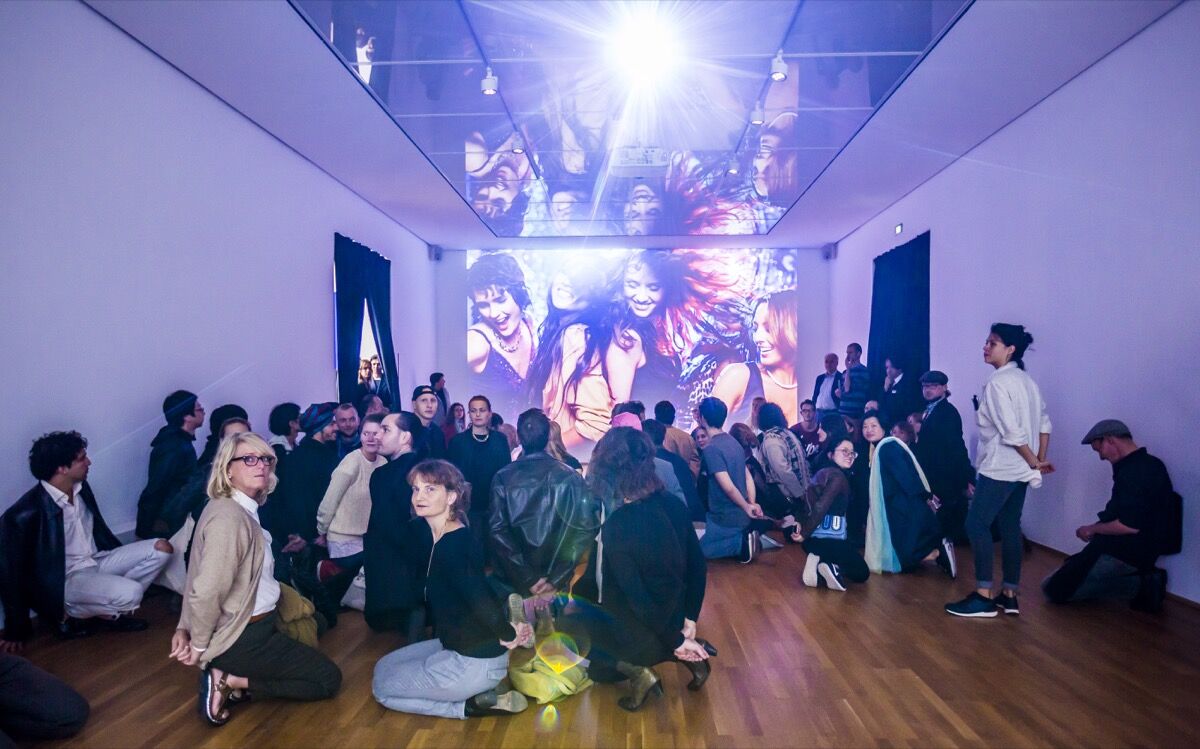 Advertisement
I reach Falsnaes, 36, via Skype. He’s in Buenos Aires, preparing for two concurrent projects: a re-staging of an earlier piece, Moving Images (2015), at the Bienal de Performance, and the launch of a new work, Force (2017), at the arteBA fair. For the latter, he’s constructing a stage in the center of the space, and then inviting six people at a time to enact pre-recorded instructions that they hear via headphones.
It’s not the first time that Falsnaes has brought his peculiar breed of interactive provocation to a fair; in 2014, at Art Basel, he presented Justified Beliefs. Part of the script for that piece involved demanding participants strip entirely nude, in public.
Not everyone was game. But, Falsnaes said, around 10 people each day compliantly shucked their clothes. “I wanted a situation where people really had to make a decision: ‘Stop, I’m going,’ or ‘Fuck it, I’m going to do it,’” he explained. “Most people, if they didn’t want to [strip nude], they took off the headphones and went out of the piece. They still believed so much in the authority of the voice that they couldn’t imagine staying there, and listening, but not doing it.”
Falsnaes digests the hoariest of performance-art cliches—the attention-seeking ego of the solo star; obscure, repetitive physical motions; occasional nudity—and respins them in novel configurations.
Mainly, he removes himself from the equation; he has, gradually, been disappearing from his own work. His set-ups are barebones: hired performers, a set of script-like parameters, certain technologies (headsets, a video camera). Like
Sol LeWitt
wall drawings, they are semi-unpredictable recipes that can be enacted by almost anybody who is willing to abide by the rules. 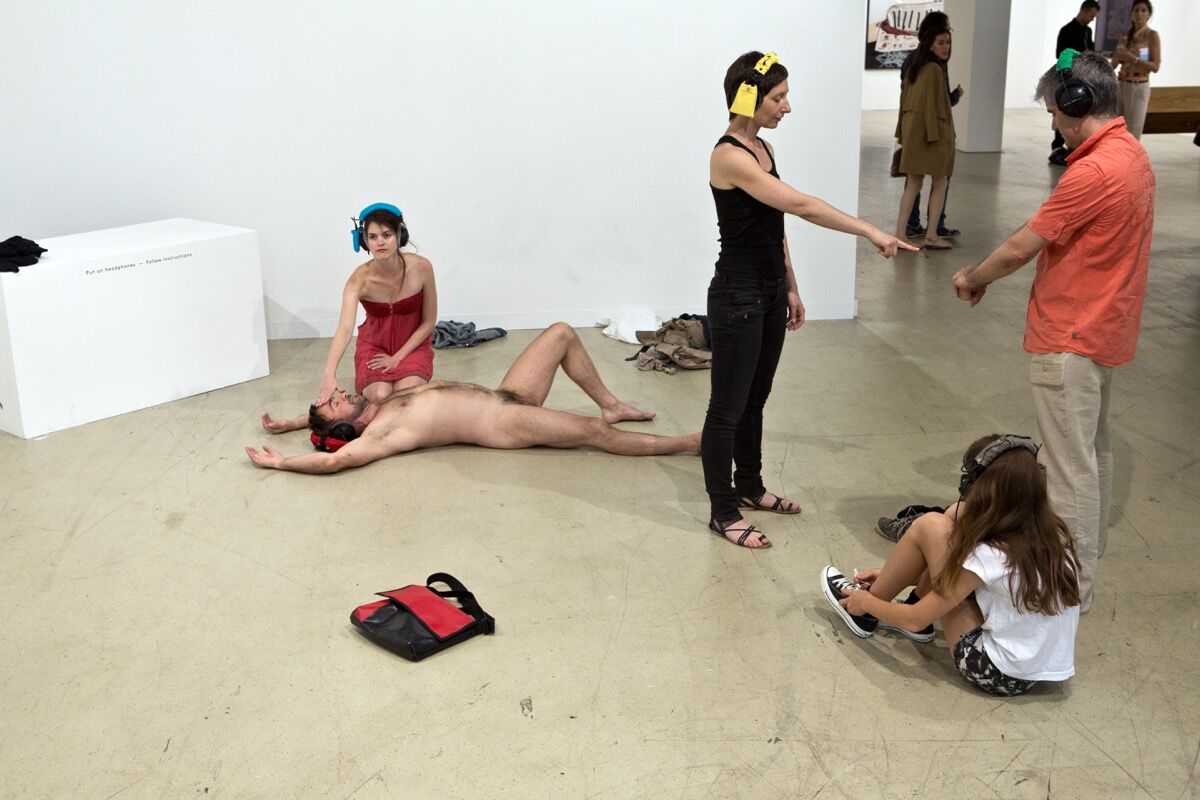 “Most entertainment, and most cultural experiences, are based on letting the viewer lose themselves or forget themselves in the art, the movie, this immersive experience of just seeing the work,” he tells me. “What I try to achieve is the opposite of that. The goal is not necessarily to make people feel uncomfortable—that’s more a side effect.”
Sometimes, the viewer-performers in a Falsnaes piece are tasked with a specific job: Build a sculpture, paint a painting. For the ongoing work One, he acts as a guide and instructor overseeing viewers who are creating their own abstractions on canvas.
“With painting, and especially
Abstract Expressionism
, there’s this idea of the artist and their handwriting or signature style,” Falsnaes says. “I found it interesting to replace that with the gestures of the viewer.” That doesn’t mean, he stresses, simply providing the raw materials and allowing strangers to blindly follow their impulses. “It’s not as easy as it looks. If you give people a brush and say, ‘Go paint whatever you want,’ most do a smiley, or write their name, or paint a sun or a house. It’s about creating an atmosphere, a set of instructions in which people actually move into something like expression or gesture. But in order to do that you need to give them a defined set of rules. Again, it’s this weird play—between controlling the situation and allowing a specific amount of freedom.”
With its tangle of preoccupations—consent, community, emotional catharsis, teamwork, trust—it’s not surprising that Falsnaes’s work seems strikingly relevant (and appealing) in the dour days of 2017. His performances have the earnest generosity of
Ragnar Kjartansson
mixed with the offbeat sociological bent of
Kenneth Tam
, whose Breakfast in Bed (2006) explored the mechanics of male-bonding via goofy cooperative exercises. They also share something of the madcap, collaborative energy of
Gelitin
(as in a 1999 piece that conscripted “strong men” to form a “human elevator.”) I’m also reminded of the interactive experiments of
Ed Fornieles
, who in 2013 staged a large-scale performance piece masquerading as a gala at the New Museum. 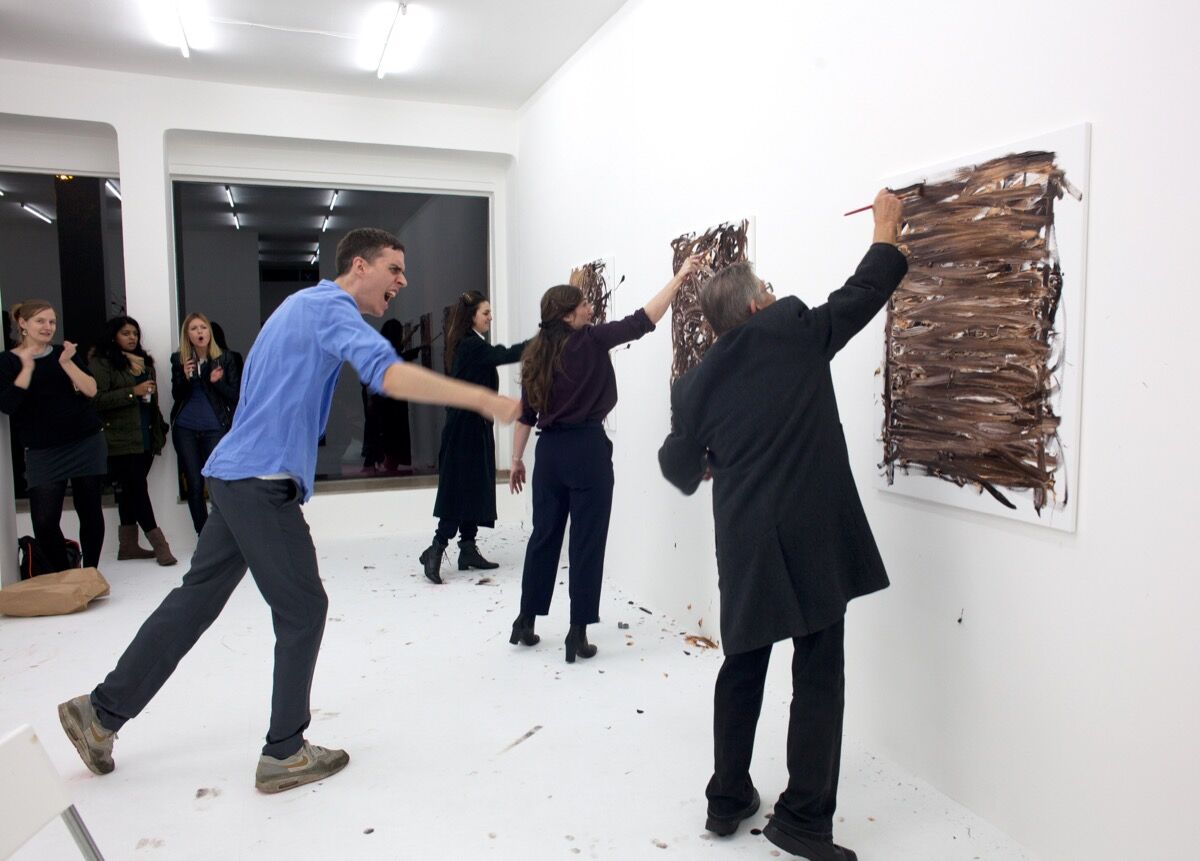 Christian Falsnaes, One, Drei, Cologne, 2013. Photo by Alwin Lay. Courtesy of the artist and PSM, Berlin.

Discussions of Falsnaes’s work can inevitably end up sounding a bit sinister, with the artist posed as a benevolent authoritarian whispering from the wings. (“I’ve developed a language and a technique, a way of addressing people, where the chances of people participating are much higher,” he tells me.)
I mention the infamous Stanley Milgram experiments, in which ordinary citizens agreed to deliver what they thought were electroshocks to unseen strangers—all because a supposed authority figure was telling them to do so.
“There’s one major difference from the Milgram experiments,” Falsnaes says. “In my works, I’m not trying to prove anything. I’m not putting you through an experience to show something. The experience you have, in the moment—that’s the purpose.”
Throughout his practice, it’s about striking a balance that is tense, productive, and, yes, occasionally uncomfortable. “If the work becomes too much about manipulating people, making them do stuff and seeing how far I can push them, it becomes uninteresting,” he says. “And if it’s only about liberating, making people feel good—it also becomes uninteresting. The most powerful situations are somewhere in between.”
Scott Indrisek
Related Stories