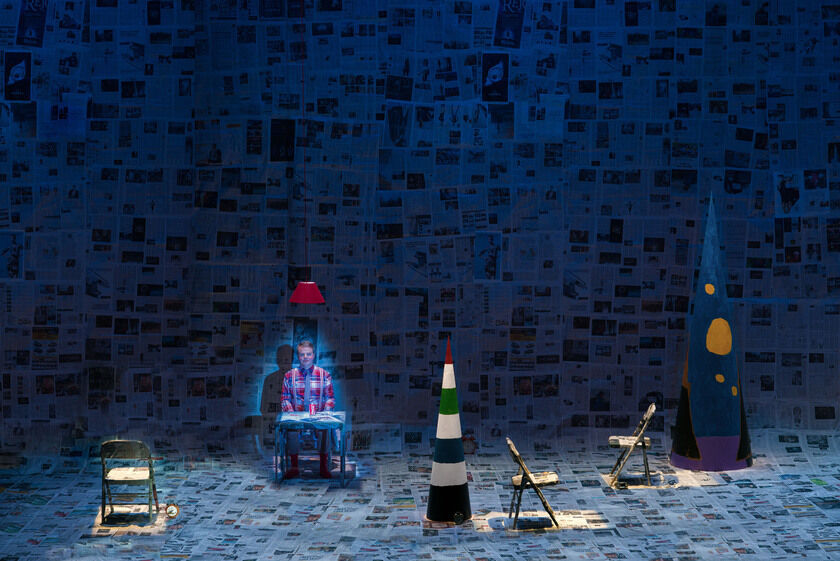 Christopher Knowles
The Sundance Kid is Beautiful, 2013
ICA Philadelphia
For a person with autism, like the artist
Christopher Knowles
, the world outside can be so noisy, so busy, so full of information that it becomes overwhelming and, sometimes, terrifying. Knowles’s response to the frenzied world around him is to construct islands of visual and auditory play in its midst. In his art—spanning text, sound, painting, sculpture, and performance—concrete facts, numbers, and patterns are basic elements that not only ground him in the world, but are a source of delight. His work can be disconcerting and strange, but is so imbued with Knowles’s ebullient energy that it’s always enchanting—and fun.
The stage set of Knowles’s 2012 one-man performance, The Sundance Kid Is Beautiful—the centerpiece of “In A Word,” his current retrospective at the Contemporary Arts Museum Houston—offers an illuminating glimpse into the artist’s world. The walls and floor are papered with pages from the New York Times; headlines, photos, and blocks of print form a black-and-white babel that surrounds three brightly-painted cones and a few other simple objects: some chairs, a table with a can of Coca-Cola and a glass on it, a red alarm clock, and a green window-frame. It’s a simple fortress in a world of information overload.
The artist’s uncommon 40-year career began in his teens, when he was discovered by the experimental theater director
Robert Wilson
; Knowles began contributing to and performing in Wilson’s epic avant-garde stage works, like the opera Einstein on the Beach (1976), for which Knowles wrote the libretto. While Knowles’s work with Wilson is widely recognized, however, his own wide-ranging practice has received less attention; over the years, gallery and museum shows have been rare. But with the retrospective exhibition in Houston now showing through the end of March; recent acclaimed performances of The Sundance Kid Is Beautiful in New York and Philadelphia; and the release of a new vinyl record of his audio works, it’s an exciting time for Christopher Knowles.
I join him and his wife, the artist
Sylvia Netzer
, for dinner at the Village Den, a block from their apartment in the West Village. At 58, Knowles has rounded into middle age; his hair is graying, and he’s more outgoing than the quiet, haunted-looking teenager I first met in the mid-1970s. Back then, he was living in an all-red apartment, typically hunched over an
Olivetti
portable typewriter, obsessively typing, and listening to two different AM-radio stations at the same time.
The way Knowles communicates is unique, but he’s comfortable being interviewed and clearly enjoys talking. Before we’ve taken our seats, he points out that the date is January 19, 2018. Dates and times are one of ways he orients himself, and he has a savant’s ability to recall the date, time, and day of the week that historical and personal events occurred. “Today is the 44th year anniversary of when I first came to 147 Spring Street, Bob Wilson’s loft,” he says. “It was January 19, 1974. I lived with Bob, and we became collaborators and friends. I was 14.”
Knowles first came to Wilson’s attention when a family friend named George Klauber, who’d taught Wilson at the Pratt Institute, gave him a tape-recording Knowles had made.
Knowles first got “involved” with making tapes, he remembers, when his parents gave a reel-to-reel tape recorder to him and his sisters for Christmas, when he was 11 years old. “My mother showed me how to record something. I played it back, I rewound it, pressed the play button again. Each time it came out very different,” he tells me. For Knowles, who hadn’t spoken until age 10, the rhythmic variations of his recorded words were fascinating. 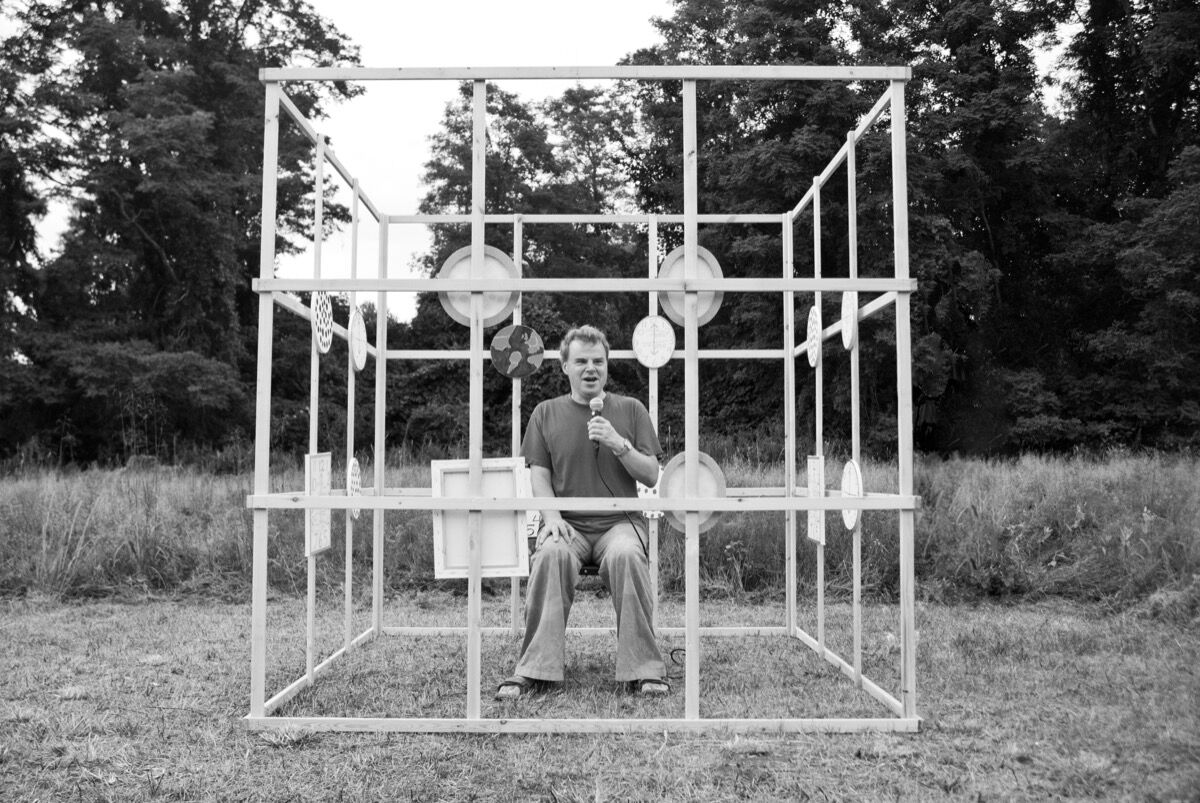 Advertisement
On the tape, Wilson heard Knowles repeating variations of phrases about his sister Emily watching TV, in what seemed to be highly organized sequences (“Emily likes the TV because she watches the TV because she likes it. Emily likes the TV”). Intrigued by Knowles’s unique use of language, Wilson invited the teen and his parents to attend the opening night performance of his new opera, The Life and Times of Joseph Stalin (1973), at the Brooklyn Academy of Music. Before the performance started, he asked Knowles to come out on stage with him, and, at several times during the production, they appeared together, extemporaneously trading lines of Emily Likes the TV, to the complete surprise of the rest of the well-rehearsed cast.
“That’s when I met Bob Wilson,” Knowles tells me. “We did Emily Likes the TV. But, it was getting late. So, my parents came backstage and said it’s time for me to go home. So, I had to go. But, then, my father called Bob, and said it was okay for me to be in the other four performances. It was okay, because I was willing to communicate with Bob Wilson.”
A willingness to communicate with others was unusual for the inward-directed child, and in the months that followed, Wilson befriended the family. At the time, Knowles was attending the O.D. Heck school, a state-run school for children with developmental disorders, near Schenectady, New York. Wilson visited him there, as he later recalled in a New Yorker interview: “I went upstate to observe him…and I thought, ‘Why are they trying to correct his behavior when he’s obviously intelligent?’ The challenge was being allowed to enter his private kingdom.” At Wilson’s urging, Knowles’s parents agreed to let him live at his loft, where he could have a space to work and Wilson could help nurture the boy’s unique gifts. Wilson’s so-called “Byrd Loft,” a converted industrial building in SoHo, was a vortex of creative activity when Knowles moved there in 1974. The large open space on the first floor (the living quarters were on the second) functioned not only as a rehearsal space for the Byrd Hoffman School of Byrds—as Wilson had named the company of artists, musicians, and dancers who worked on his massive productions—but was a gathering place for the downtown art scene during Thursday night open houses.
Knowles blossomed in the energetic environment and became a key contributor to Wilson’s next creation, A Letter for Queen Victoria, which had a limited engagement on Broadway, at the ANTA Theatre, in 1975. The backdrops and much of the sound and dialogue were constructed around Knowles’s audio-tape collages, and he also performed in the piece. (The Sundance Kid is Beautiful, his recent one-man performance, took its name from a section of Queen Victoria, in which he and Wilson parroted an exchange of echoing phrases written by Knowles about the Sundance Kid.)
At the same time, he was tapping out astonishing typewritten pieces on his portable Olivetti in the Chelsea apartment he shared with Cindy Lubar Bishop, who played Queen Victoria in the 1975 production, and remained his companion through the early 1980s. With an uncanny ability to plot patterns in his mind, without making notes or preparatory sketches, he was able to type rows of black and red letter “c’s” (for Christopher) into perfectly crafted complex images, ranging from a digital watch to the Seattle Space Needle. His typings, which also included repeating blocks of sometimes nonsensical words and phrases, dovetailed with the concrete poetry of Dick Higgins and Aram Saroyan, and the text art being done by
Lawrence Weiner
and
Ed Ruscha
. Two solo exhibitions at the Holly Solomon Gallery, in 1978 and 1979, as well as a book of his typings, elevated him to unsought art-star status. “At the age of nineteen, without exactly meaning to,” the poet John Ashbery wrote in a review in New York magazine, “Christopher Knowles has become a major figure of the New York avant-garde.”
Knowles branched out into drawing in the 1980s. In 1984, he became interested in ceramics and signed up for classes at Greenwich House Pottery, where Netzer (now his wife) was teaching. His class ended at 10 in the evening. To leave enough time to clean up and change, Knowles—who collects wind-up alarm clocks and has dozens of them in his apartment—would bring one, sometimes two, clocks with him, set to ring around 9:30. 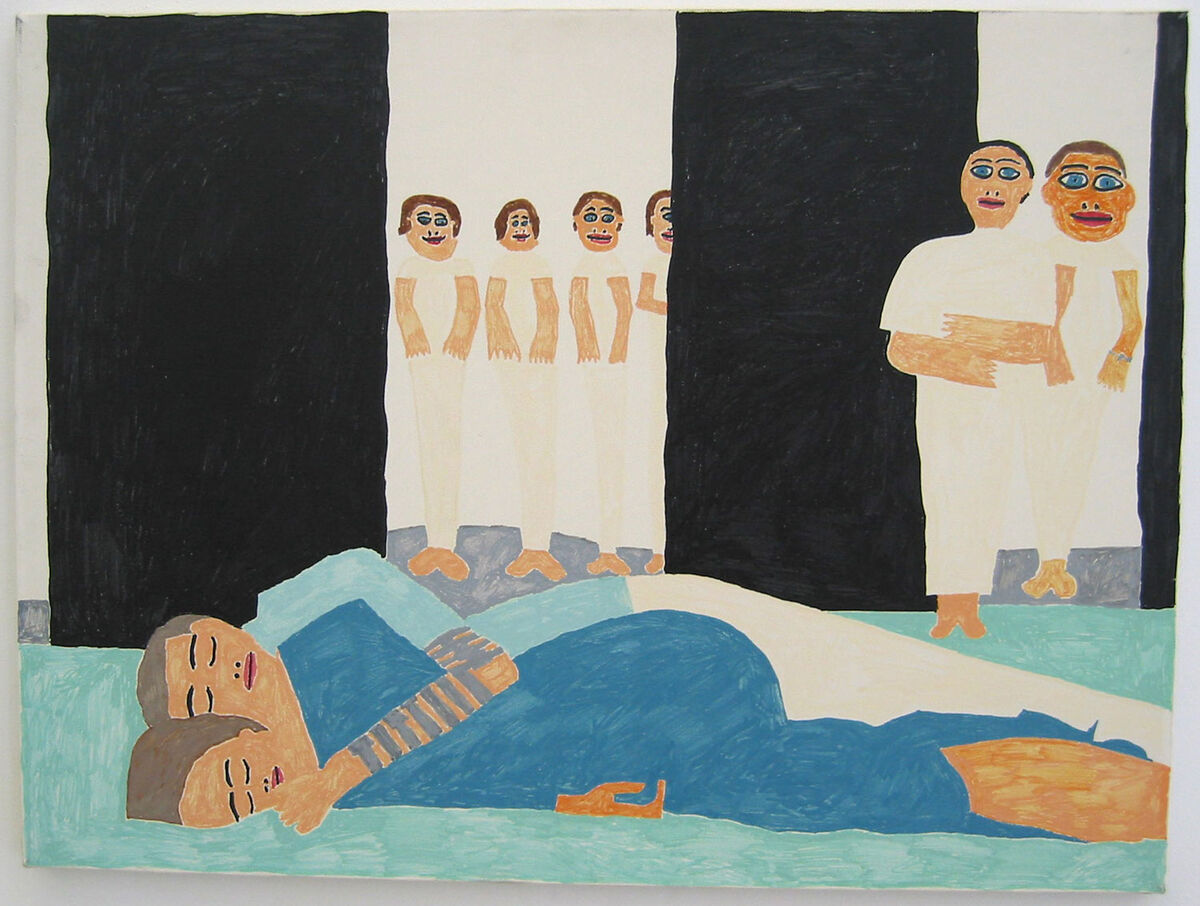 Christopher Knowles, Parzival #12, 1989. Courtesy of the artist and the Institute of Contemporary Art University of Pennsylvania.

“He’d set them to go off in the hall. It was really annoying.” Netzer laughs, thinking back. “That’s how we met.” Netzer admired Knowles’s earlier work and was interested in the drawings he was making.They became friends, then companions, and, on August 15, 2015, they were married, in a ceremony officiated by Robert Wilson.
But, by and large, the ensuing decades were quieter for Knowles. When he had a one-man show at Gavin Brown’s Enterprise in 2004, it was his first in the United States in 25 years. His drawings and typings had been shown at the Museum Boijmans Van Beuningen in Rotterdam in 1985; he’d continued to perform, contributing text and playing the lead role in Wilson’s 1987 Parzival in Hamburg, Germany, and in a few smaller-scale productions throughout the 1990s. This slower pace was fine with Knowles. The concepts of career and art world success don’t resonate with him. He simply follows his creative impulses.
Those impulses have, since the ‘90s, led him increasingly toward painting. He uses oil-based markers to fill in sections of the canvas, working free-hand, without a sketch, the same way he constructed images using the typewriter. The subjects are highly idiosyncratic: traffic lights, 4th of July celebrations, the tennis player Pete Sampras. The Life and Times of Florence Henderson (2016) is a tribute to the actress who played Carol Brady on The Brady Bunch, one of Knowles’s favorite TV shows growing up. “My sister and I used to watch it. The Brady Bunch started, I think it was on Friday, September the 26th, 1969,” he says. (I checked the date later, and, of course, he was exactly right.) 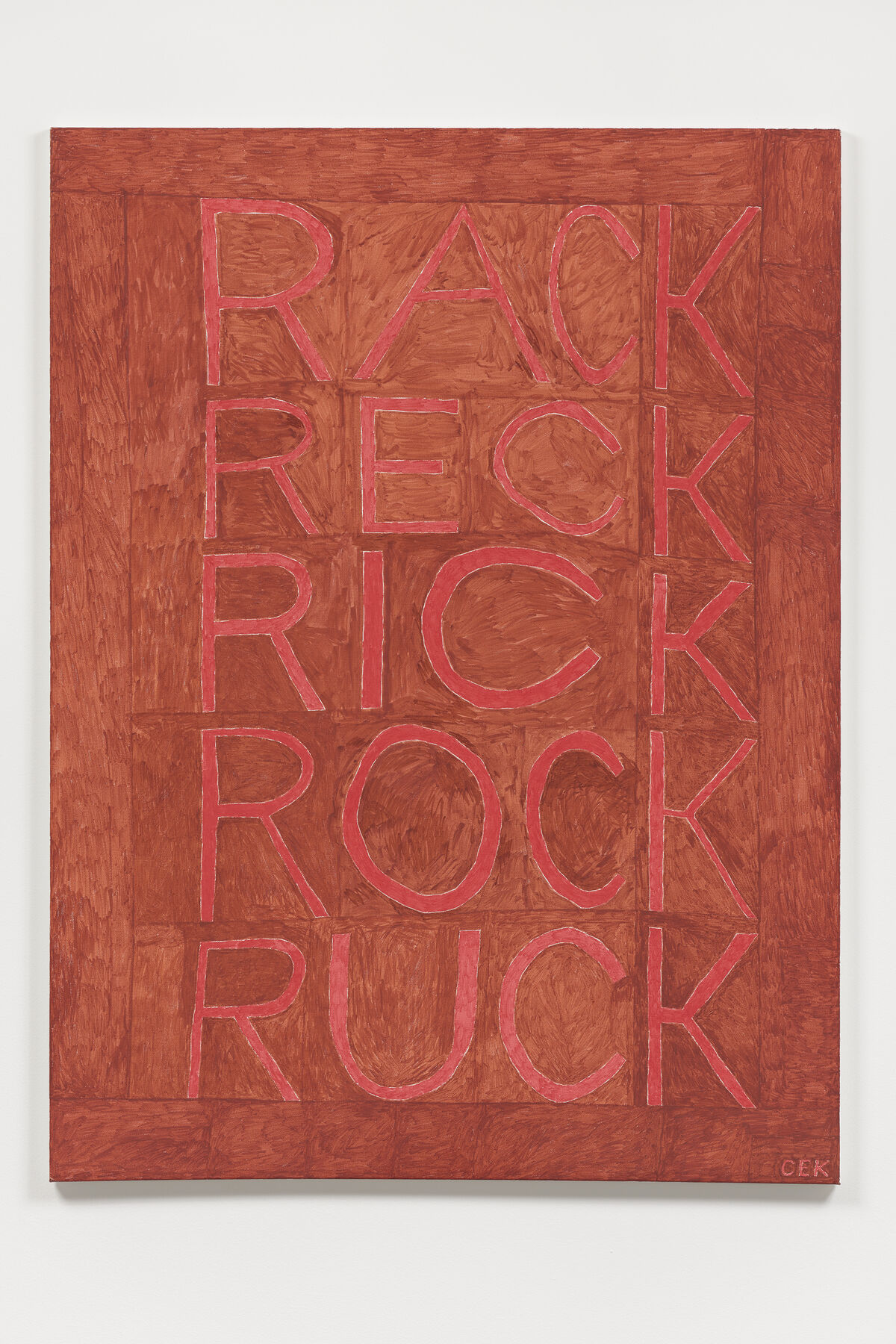 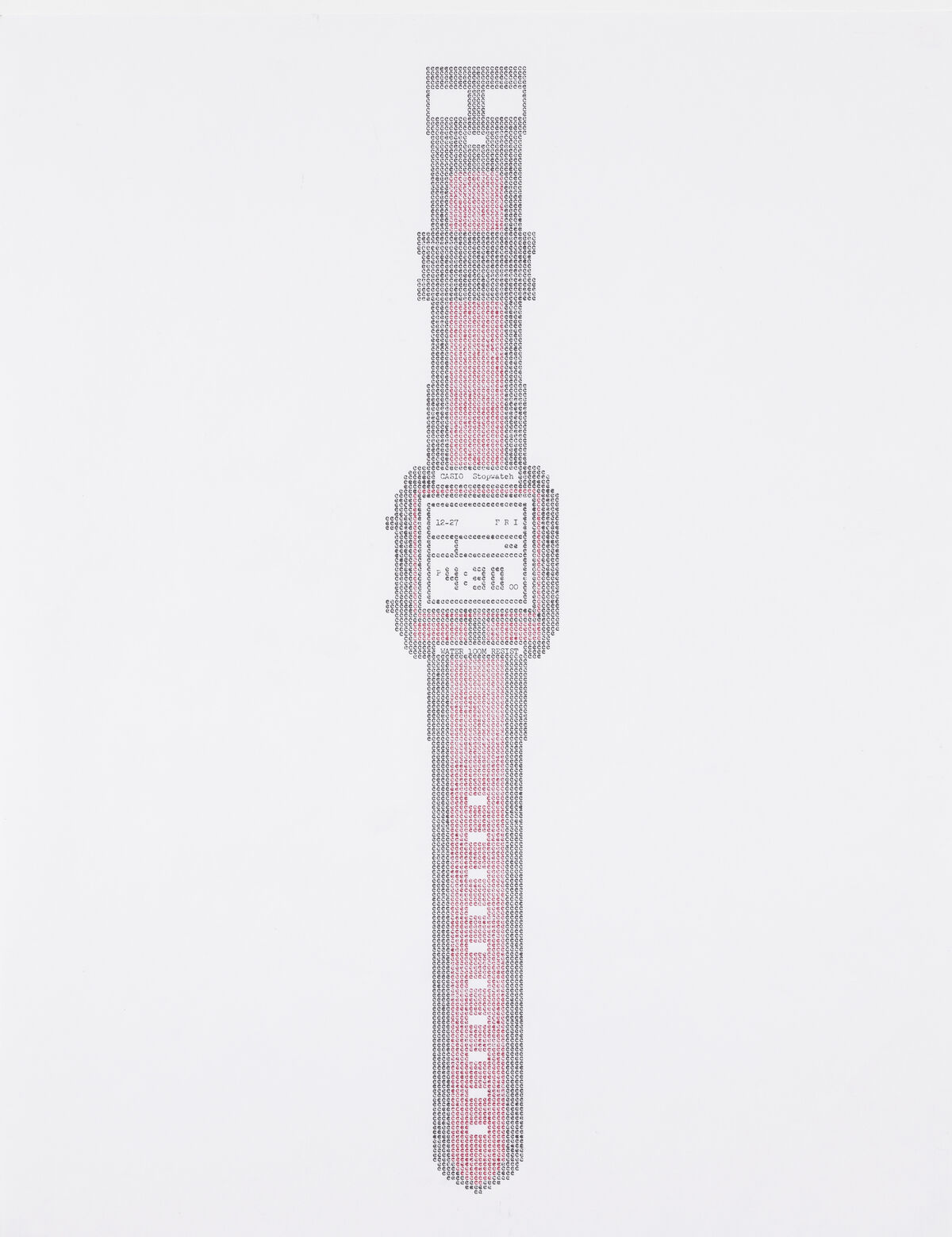 Christopher Knowles, Untitled from the portfolio "Typings," 1986. Courtesy of the artist and the Institute of Contemporary Art University of Pennsylvania.

The game Scrabble, which Knowles enjoys playing, was the inspiration for Rack, Reck, Rick, Rock, Ruck, a text painting wherein the titular words are spelled out in red lettering on a brown background. “Rick is a name, but it’s also a word in the dictionary. Reck without a W is a word in the dictionary, too,” he explains.
“When Chris plays Scrabble, he always wins,” Netzer adds.
Knowles’s vibrant figurative painting, Wall Street (2017), was made at the suggestion of Gavin Brown, who thought Knowles’s unique sensibility would work well with historical New York City sites. Knowles has never visited Wall Street, but instead worked from a black-and-white news photo, turning the dreary cityscape into a field of brilliant colors.
That’s the kind of transformational energy Christopher Knowles brings to the crazy world around him. It’s there in his paintings. It’s there in his typings. It’s there as he dances in place, snapping his fingers to music on the sound system, waiting to read from his texts at a party for the launch of his vinyl recording, The Typing Poems, produced by Matthew Higgs, director of the White Columns gallery in New York.
And that energy was there when I saw him skipping, creeping, and crawling through the newspaper stage-set at the Whitebox Art Center, during The Sundance Kid is Beautiful. “Christopher’s work is complex, it’s not as simple as you might think,” says Noah Khoshbin, who directed Knowles in that performance. “There are some dark undertones. But he’s just got this radiance about him.”
Jeff Goldberg
Related Stories

When Is an Artist’s Mental Health Your Business? 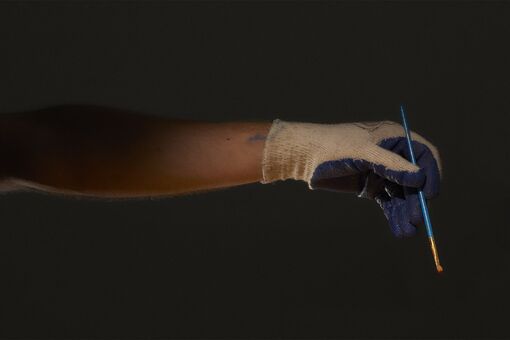 When Is an Artist’s Mental Health Your Business?
Scott Indrisek
Jul 31, 2017 Robert Wilson on the Enduring Impact of Performance and Why Art Matters
Julie Baumgardner
Aug 28, 2015