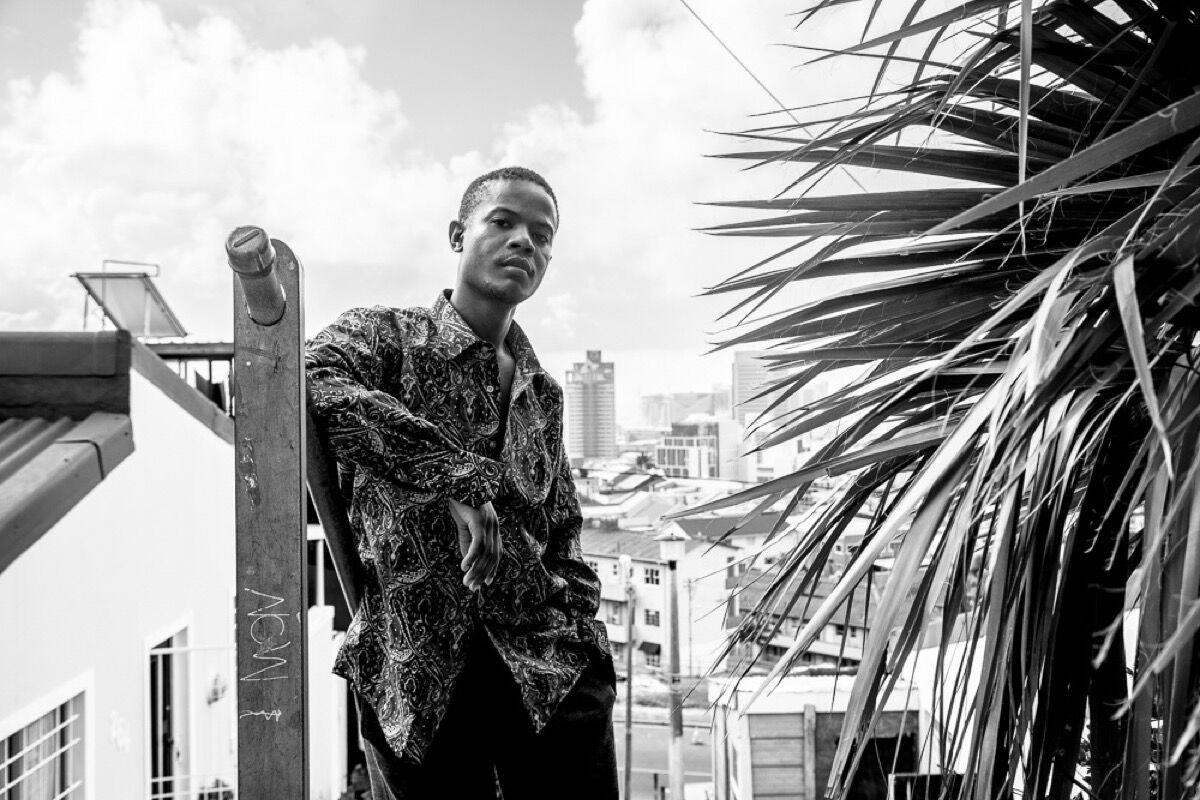 Portrait of Cinga Samson. Courtesy of the artist and blank projects.

Cape Town–based artist
Cinga Samson
, who’s known for surreal portraits that lionize African and diasporic figures, didn’t always plan on becoming a painter. As a child, he wanted to pursue a career in nature conservation. At age 20, however, he stumbled upon a shared studio in Cape Town where three artists—Gerald Tabata, Xolile Mtakatya, and Lutahando Laphuwano—were hard at work painting. He knew he had come across something remarkable. Though Samson spent his childhood in the small South African town of Ethembeni deeply engaged in drawing, he grew up with no model for what life as a visual artist might look like. Now, he saw a path for himself.
Samson kept returning to the shared studio, though the artists told him there wasn’t enough room for him to work. Eventually, his determination persuaded the trio to give him a corner of their space. He painted portraits, and his early interest in nature inspired his verdant, leafy backgrounds. Several months later, a collector who visited the studio to see the other artists’ works purchased one of Samson’s pieces, and he quickly embarked on a fast track into the global art world. This past February, Samson enjoyed his first U.S. solo show at New York’s Perrotin, and he’ll receive a solo presentation at Cape Town’s Blank Projects in February 2021. “Just being in the environment and learning artist culture was very important,” he recently shared of his foundational studio experience. It taught him to be productive and driven, to network, and to cultivate a creative workspace. A sense of community remains integral to his work. 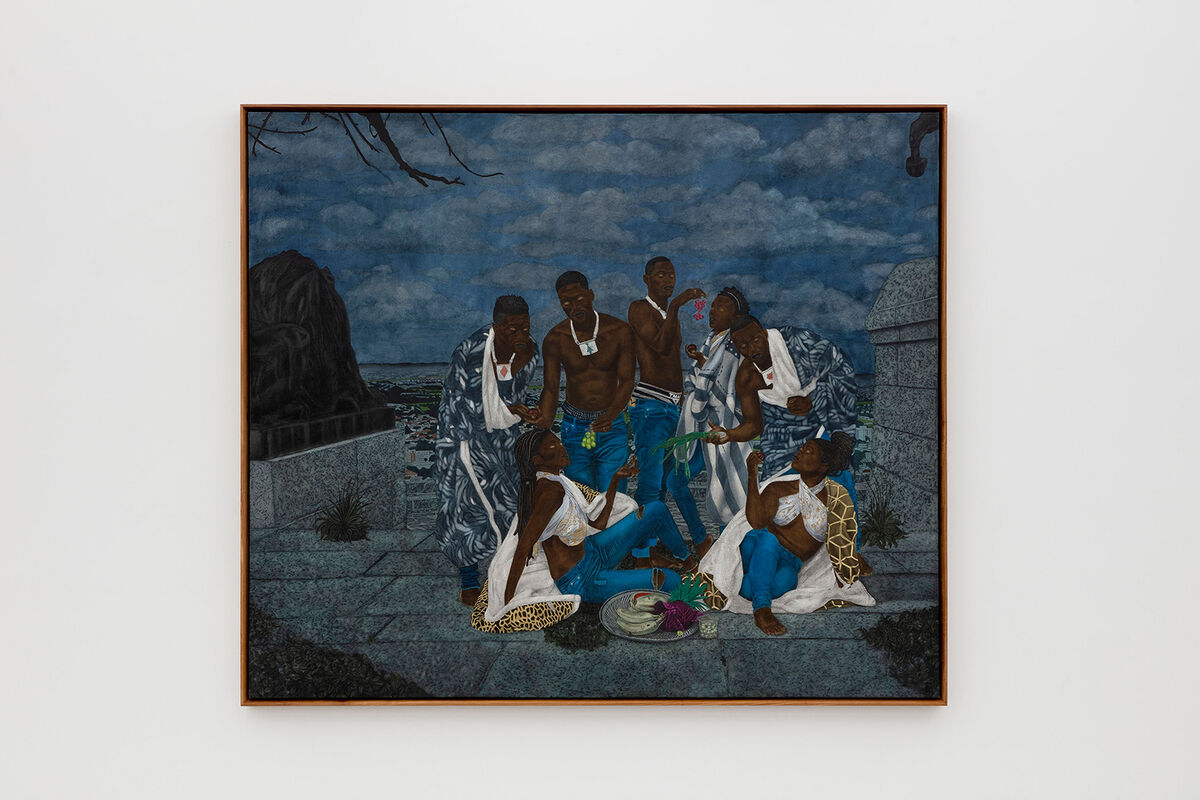 Today, the 33-year-old Samson runs his own studio in Cape Town. Last year, he sold out his booth with Blank Projects at Art Basel in Miami Beach, which featured his portraits of African and diasporic subjects with white, moon-like slivers for eyes. Speaking of this defining detail of his oeuvre, Samson recalled a childhood memory: a search for a missing cow, a moonlit river, and a teenaged trek through the forest with his cousin. “The moon was very low and very bright, and every time I look at [the eyes of the subjects in my paintings] it brings me back to that night,” he said.
Samson’s trademark element generates a mystical aura in his canvases and suggests larger ideas about seeing and blindness. Yet for years, the artist didn’t understand why he was drawn to the motif, and a mentor once told him that he needed to observe human eyes more closely. When Samson painted, however, he felt those striking white slivers pop from the canvas. He embraced the technique that had once been seen as a flaw. 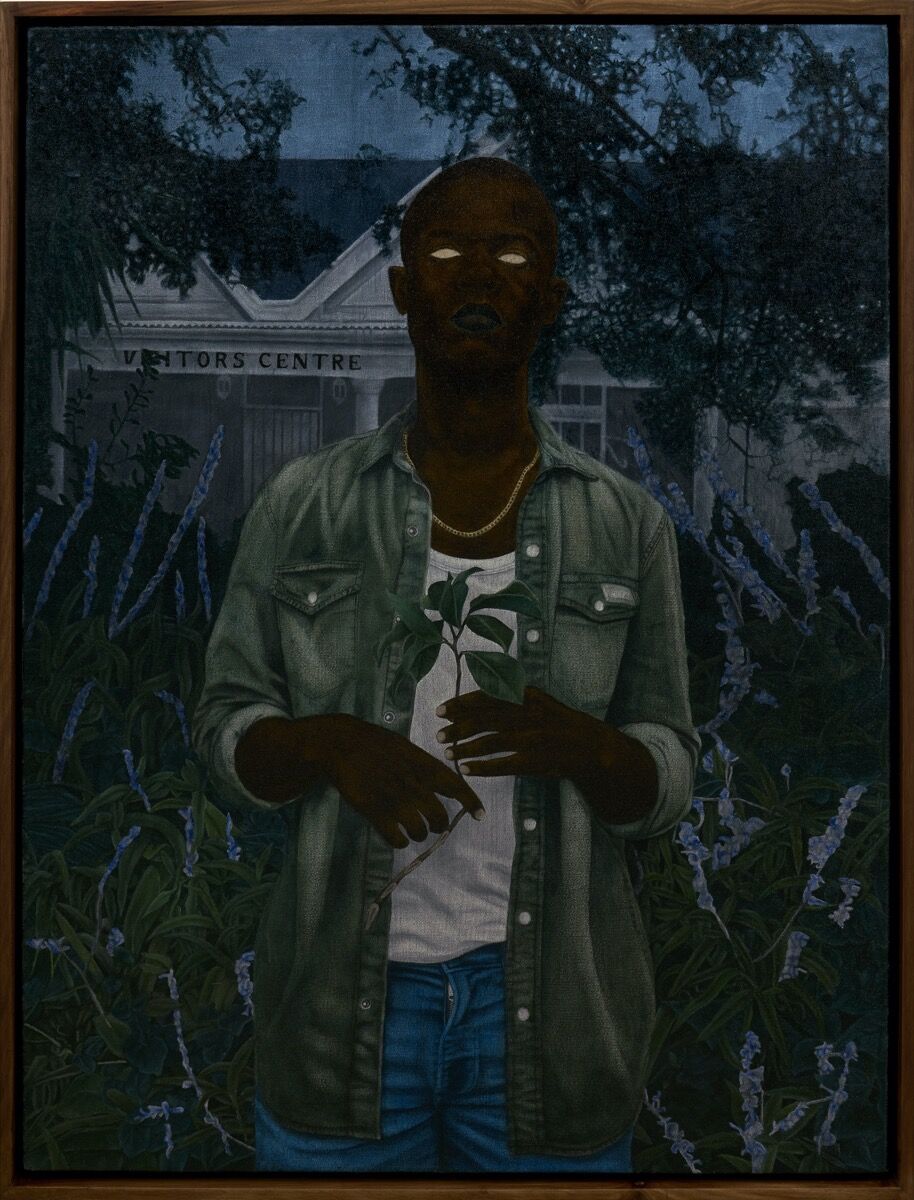 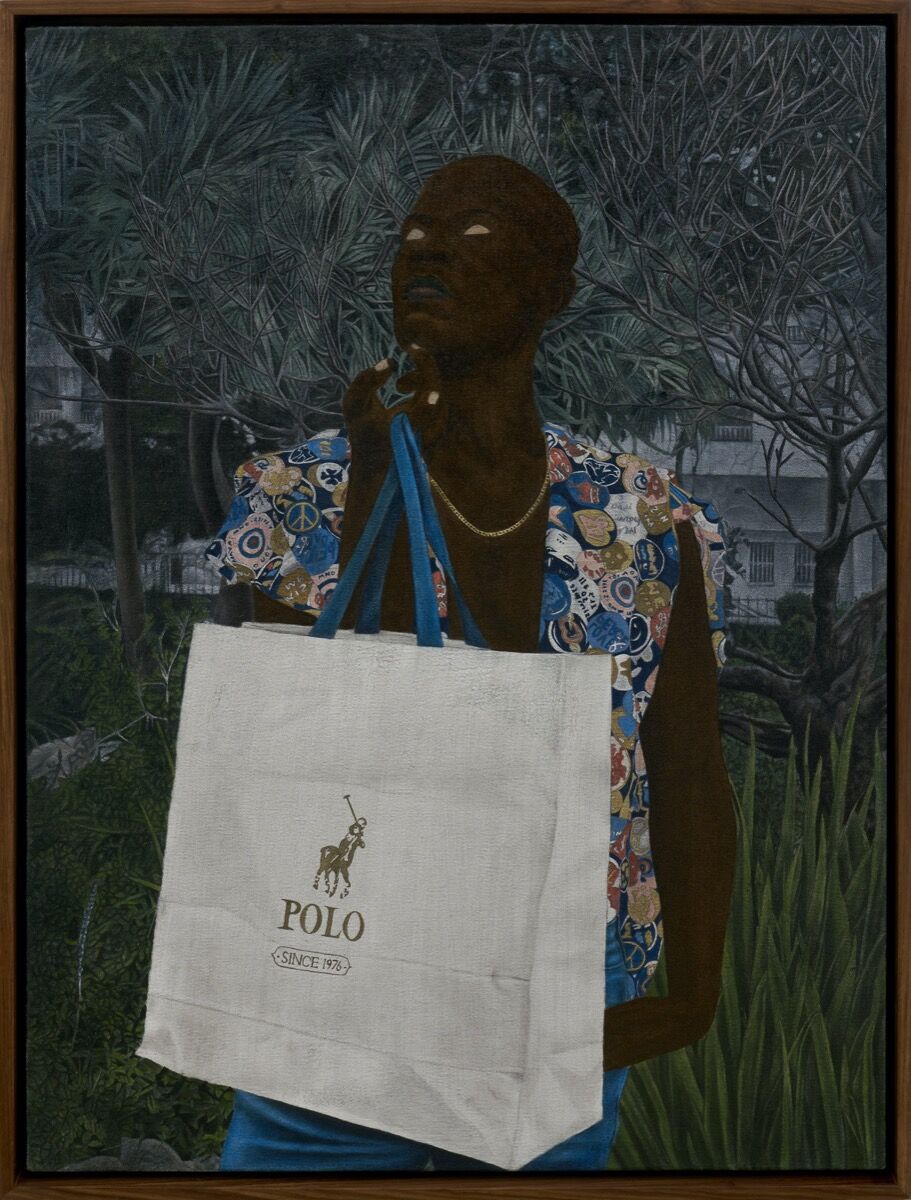 Advertisement
Samson’s portraits are so potent that, as he recently told the New York Times, “if ever you get too close, you start to approach danger.” Sometimes, the works make viewers feel as though they’ve witnessed something they weren’t meant to see. The dim, eerie palette of Ibhungane 9 (2020), and the subject’s gleaming eyes, can create a feeling like the unease generated by a horror movie scene.
Samson’s source material, in reality, is more quotidian than fantastical: Many of his subjects are based on people he knows. Quite a few hail from the township where he grew up, and some subjects even resemble Samson himself. Though the artist has never intended to create self-portraits, he admitted that he has indeed used himself as a model. This approach allows Samson to avoid fetishizing the people he represents and (as he told the Times) “feed[ing] into Western fantasies about Africa.” There’s always an implicit power imbalance between artist and subject, which Samson can diminish by incorporating his own visage into his work.
Samson also celebrates his subjects as he references the contemporary fashion he sees around him in South Africa. Stylish and elegant, his characters wear such clothing as a pink draping, a gold vest, a patterned Louis Vuitton jacket, a Tommy Hilfiger sweater, and an off-the-shoulder robe. “I wanted to create works that are definitely African and you know it when you see it,” said Samson. “But I wanted to create works that also reinforced our positive aspects of our culture and reflect excellence and the incredibleness of African people.” 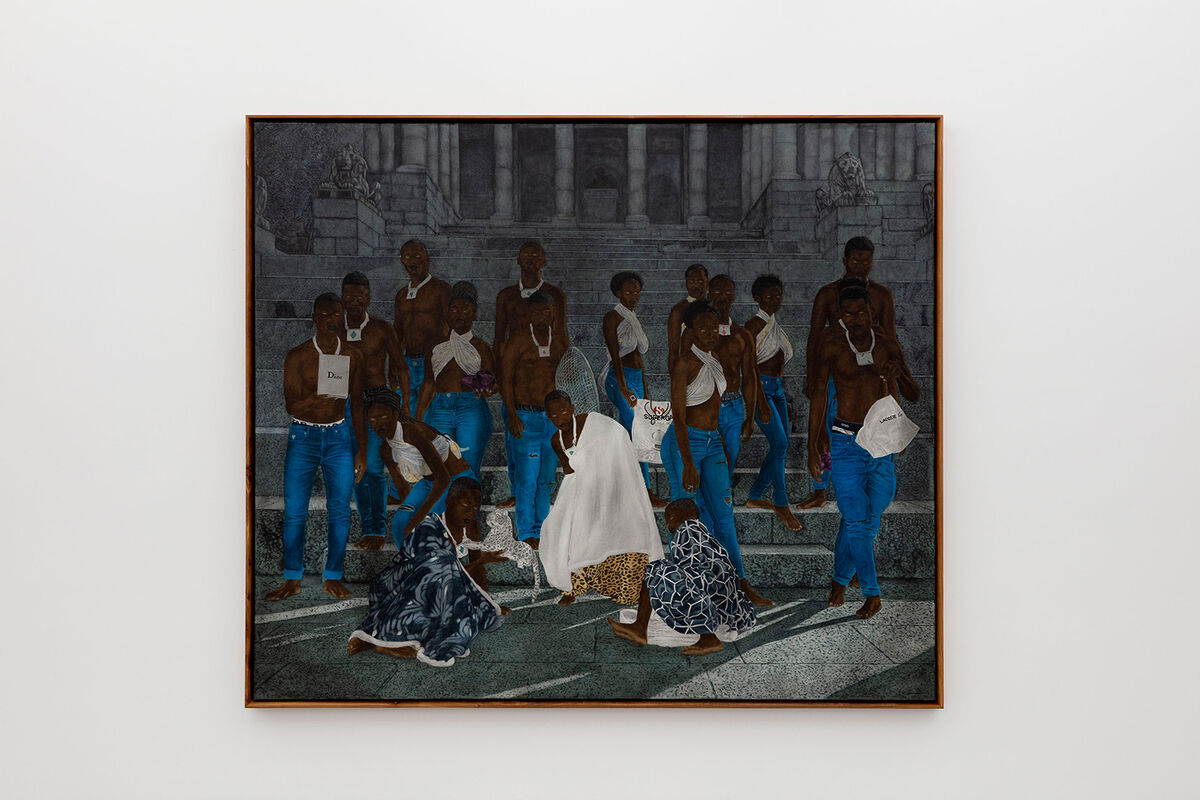 In the Perrotin show, Samson empowered his subjects in a more overtly political way. Three of the included paintings, Inyongo 1, 2, and 3 (all 2020), feature the Cecil John Rhodes Memorial on Devil’s Peak in Cape Town. The landmark commemorates the eponymous British imperialist, colonizer, and diamond magnate. “It’s not a place of good memories,” the artist explained. Before he began the suite of paintings, Samson organized a photo shoot at the statue with friends from his hometown. In the resulting compositions, they wear blue jeans and bare chests or white coverings, expressing themselves through their clothing. Through his powerful group portraits, Samson began to reclaim the monument’s narrative for the city’s non-white community.
Such problems of representation and power, of course, transcend the art world, and Samson believes that issues of race and equity are particularly important right now. He noted that critics themselves have failed to acknowledge artists of African descent for far too long and must open the gates to previously unappreciated talent. He’s skeptical of using the word “Black” as a descriptor, due to its slippery, politicized, and variable meanings. 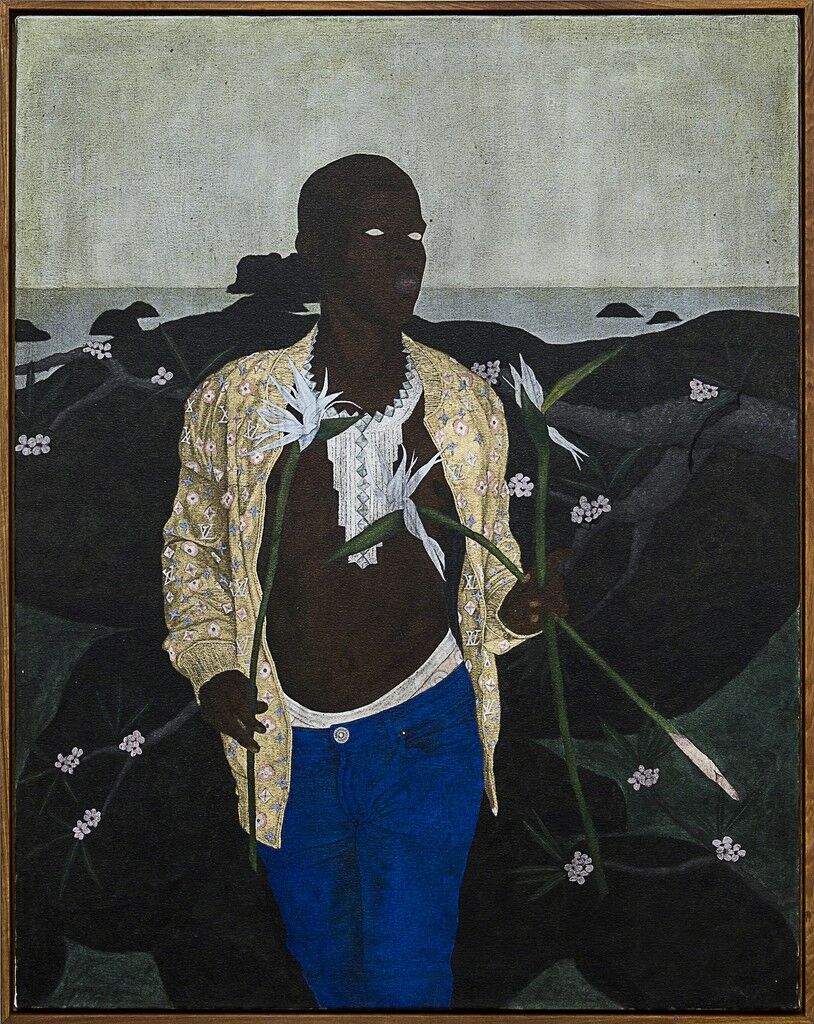 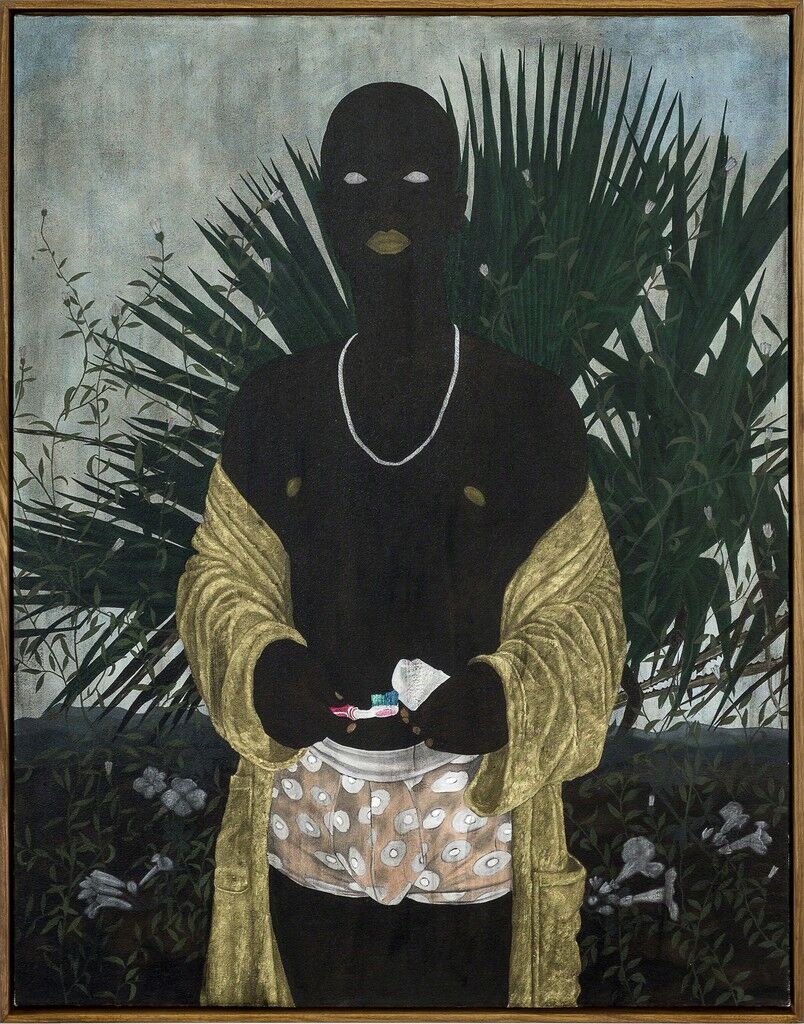 Cinga Samson
Two piece 2, 2018
blank projects
As the world grapples with police brutality and socioeconomic disparities in a new way, Samson’s ideas are evermore potent. “White people should love Black people for their benefit, and vice versa,” the artist said. Only then can real change occur. As he garners international acclaim, Samson continues to paint his friends and his South African surroundings with an eye towards supporting his artistic community in his own city and beyond.
Charles Moore
Related Stories