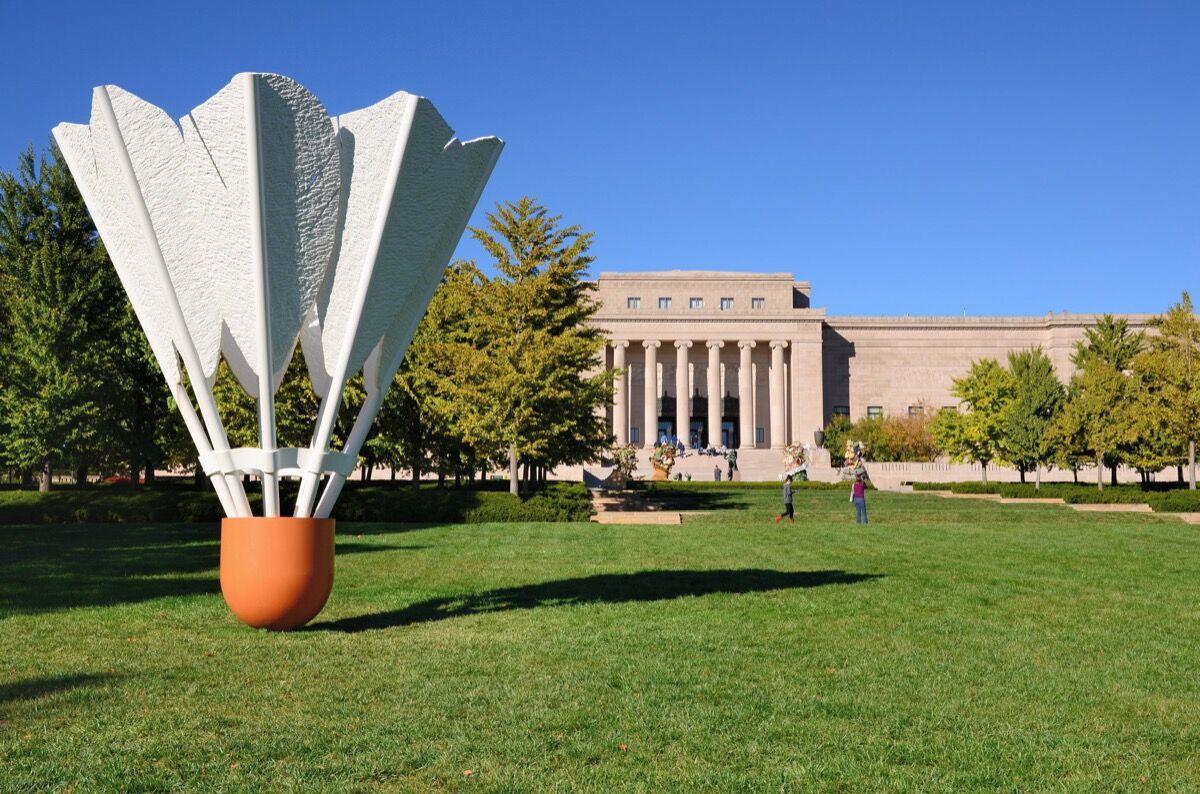 “I am for an art,”
Pop
artist
Claes Oldenburg
wrote in 1961, “that does something other than sit on its ass in a museum.” He went on to create a series of large-scale public sculptures far too big for a gallery. From immense ice cream cones to colossal clothespins, each one monumentalizes the everyday in Oldenburg’s signature tongue-in-cheek style.
Early in his career, during the late 1950s and early ’60s, the Swedish-born artist was an influential creative force behind the New York
Happenings
. These experiments with immersive environments led to the creation of his notable installation works The Street (1960) and The Store (1961–1964). His work grew in size as he began to play around with “soft sculpture”—consumer objects like hamburgers or toilets made oversized and inflatable—and soon enough, Oldenburg’s art began to move increasingly outside the confines of the white cube. Here are five of his most iconic public works. 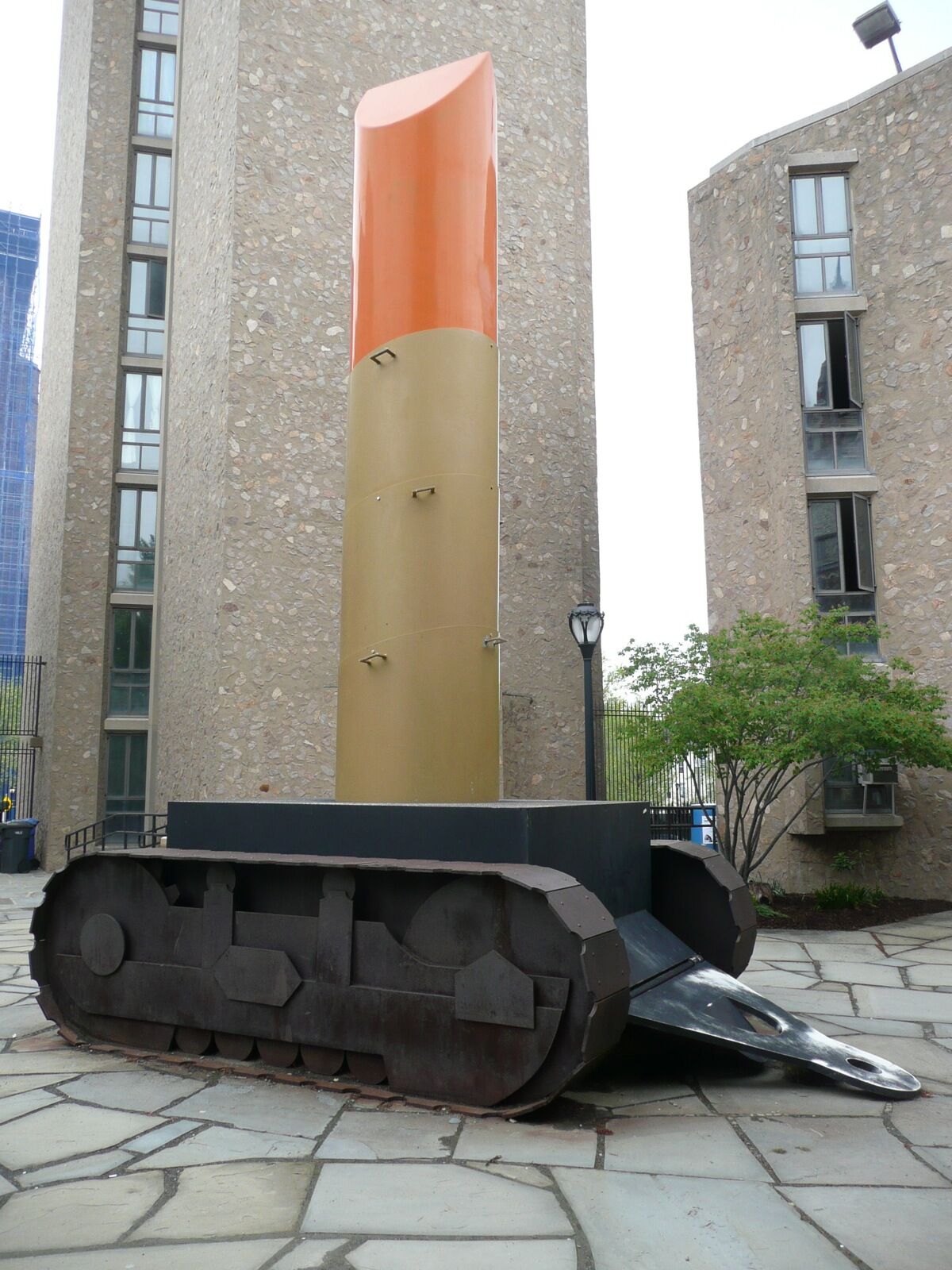 On May 15, 1969, as students of Yale sat down to their final exams, a monumental sculpture was taking shape in the university’s Beinecke Plaza. A playful mashup of oversized objects—a 24-foot-tall golden tube of orange lipstick emerging from a caterpillar-treaded tank—Lipstick was Oldenburg’s first large-scale public work. Meant to serve as a platform for speakers during anti-Vietnam protests, then reaching fever pitch on college campuses across the country, its visual juxtaposition undercut the muscular rhetoric of war with a feminized product.
The Pop artist, a Yale graduate himself, worked with a group of students, faculty, and alumni who paid for the cost of materials (the artist charged no fee for the work). Although university leadership never officially condoned the sculpture, it remained standing until 1970 when the wooden tracks began to rot through. Four years later, at the behest of Yale’s art department, he restored the work and re-installed it on campus. “And there it still stands,” Oldenburg noted in 2015, “and it has now been declared part of the Yale art collection, which took many, many years.” 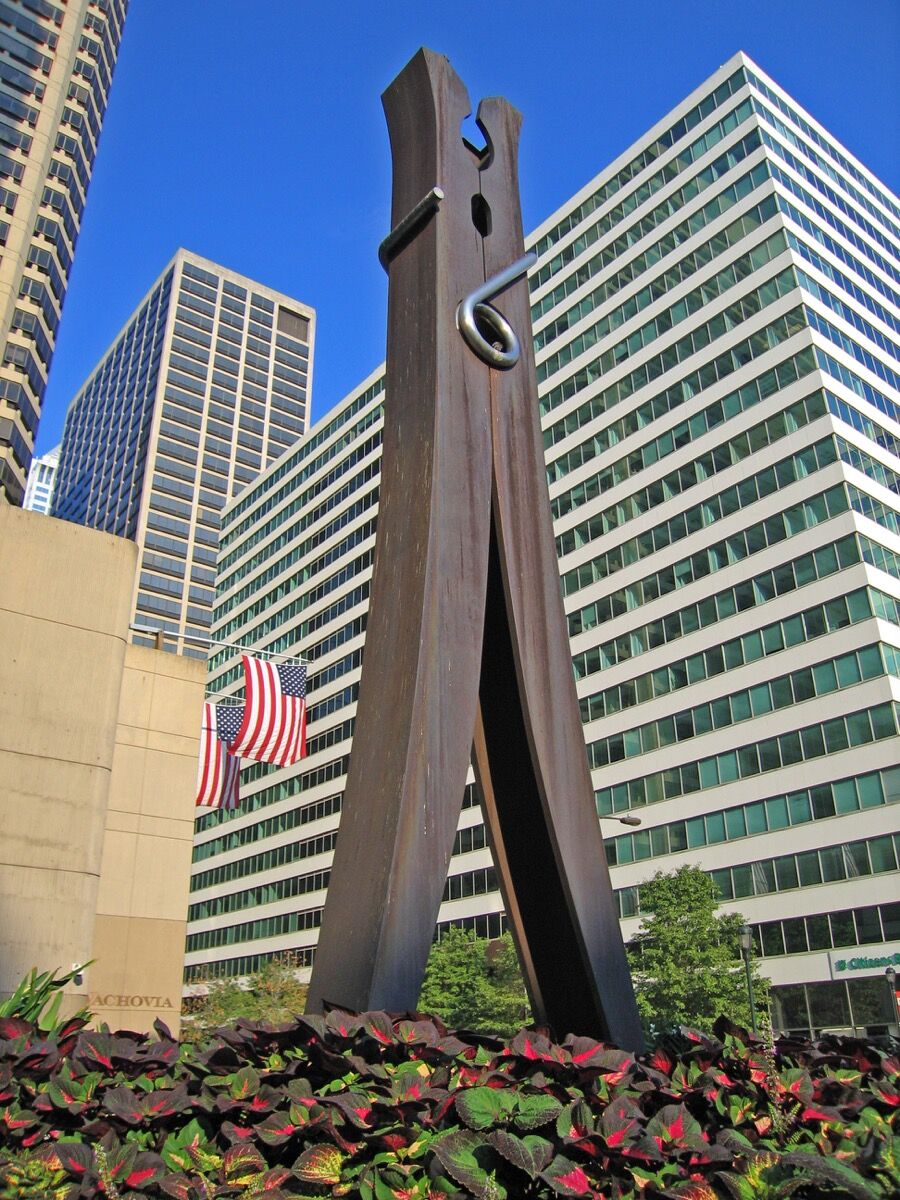 Advertisement
Throughout the 1970s, Oldenburg continued designing public works—each one larger than the last. He describes the 45-foot-tall Clothespin, which looms over an entrance to the subway across from Philadelphia’s City Hall, as his first “architectural-scale sculpture.” It was also his first public commission, funded through the city’s progressive “Percent for Fine Arts” program that required any redevelopment project to devote a percentage of its budget toward commissioning original, site-specific public artwork. Although its shape is immediately recognizable, Oldenburg took liberties with certain details—the hinge, for example, is bent into the shapes of a 7 and 6 to represent the year it was commissioned (also the year of the city’s bicentennial). 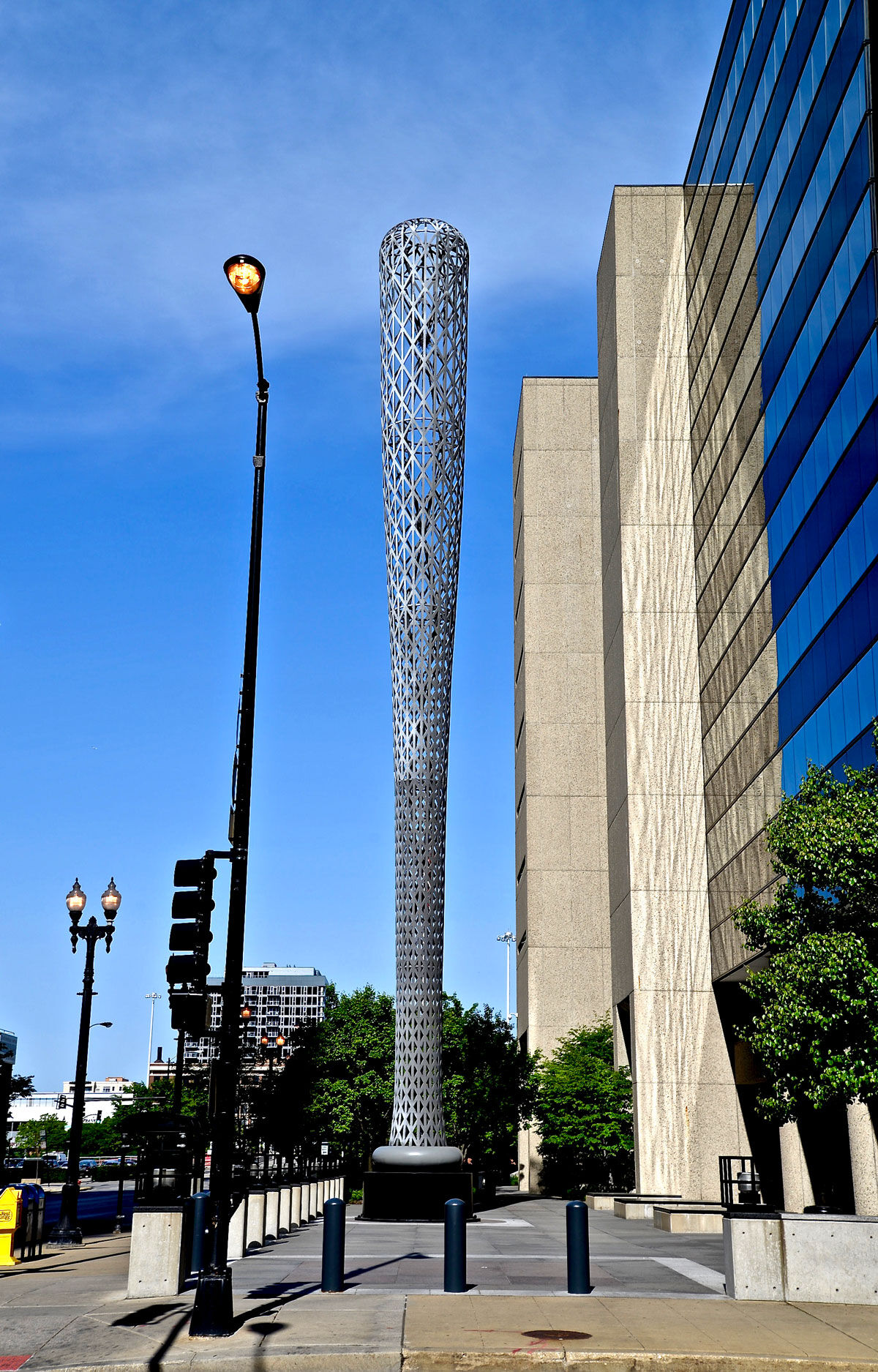 Oldenburg met Dutch-born art historian Coosje van Bruggen in 1970, and soon she was suggesting tweaks to his monumental sculptures. The pair married in 1977, after which point they officially collaborated on more than 40 site-specific public works over three decades. One of their first joint projects was Batcolumn in Chicago, a gigantic latticework baseball bat balanced on its handle. Oldenburg had originally planned to make it red, but as the artist once recounted, when she visited the fabricator van Bruggen shot back: “There is a big red
Alexander Calder
downtown, so why don’t we make it a different color? Besides, red is not a Chicago color; Chicago is all gray.” 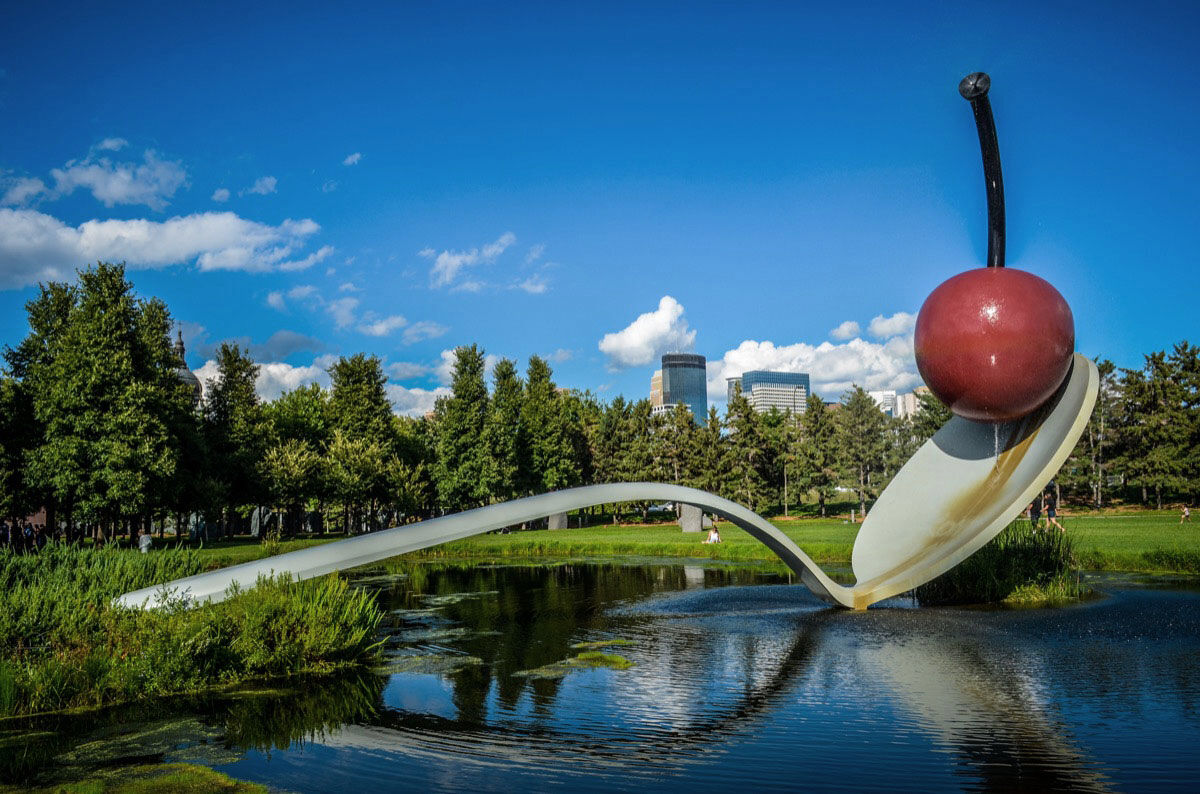 In 1962, Oldenburg came across a novelty spoon resting on a pool of fake chocolate. The visual lodged in his mind, and the utensil popped up in a number of his plans and drawings over the years. (In one print, he reimagined Chicago’s Navy Pier as a giant spoon.) But it would be more than two decades before the motif came to be realized—in monumental fashion—in a Minneapolis sculpture garden. It was in the ’80s that the Walker Art Center commissioned Oldenburg and van Bruggen to create a fountain sculpture. Van Bruggen thought the spoon fit the site; the sculpture garden’s formal flowerbeds evoked Versailles, which in turn reminded her of the strict dining etiquette enforced by Louis XIV. Her contribution was the cherry, a whimsical pop of color that characterized her lighthearted additions to Oldenburg’s practice. 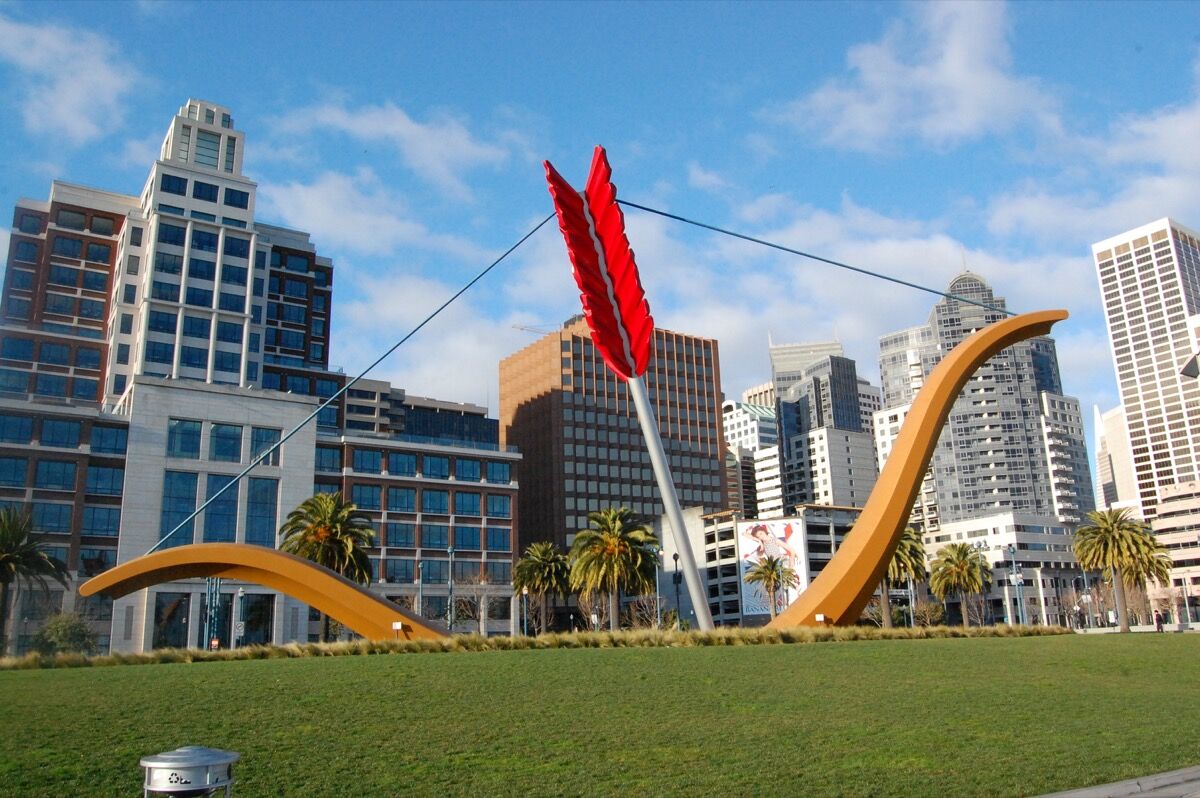 Donald and Doris Fisher, founders of the clothing brand The Gap, commissioned this work for a small park along the Embarcadero, on the edge of the San Francisco Bay. Although the couple’s first sketches for the project envisioned a bow and arrow pointed toward the sky, van Bruggen soon suggested flipping the orientation. In its new position, the artists hoped to evoke both the prows of passing ships and the suspension cables of the Bay Bridge. In all, the 60-foot sculpture took more than three years to realize.
Abigail Cain
Related Stories