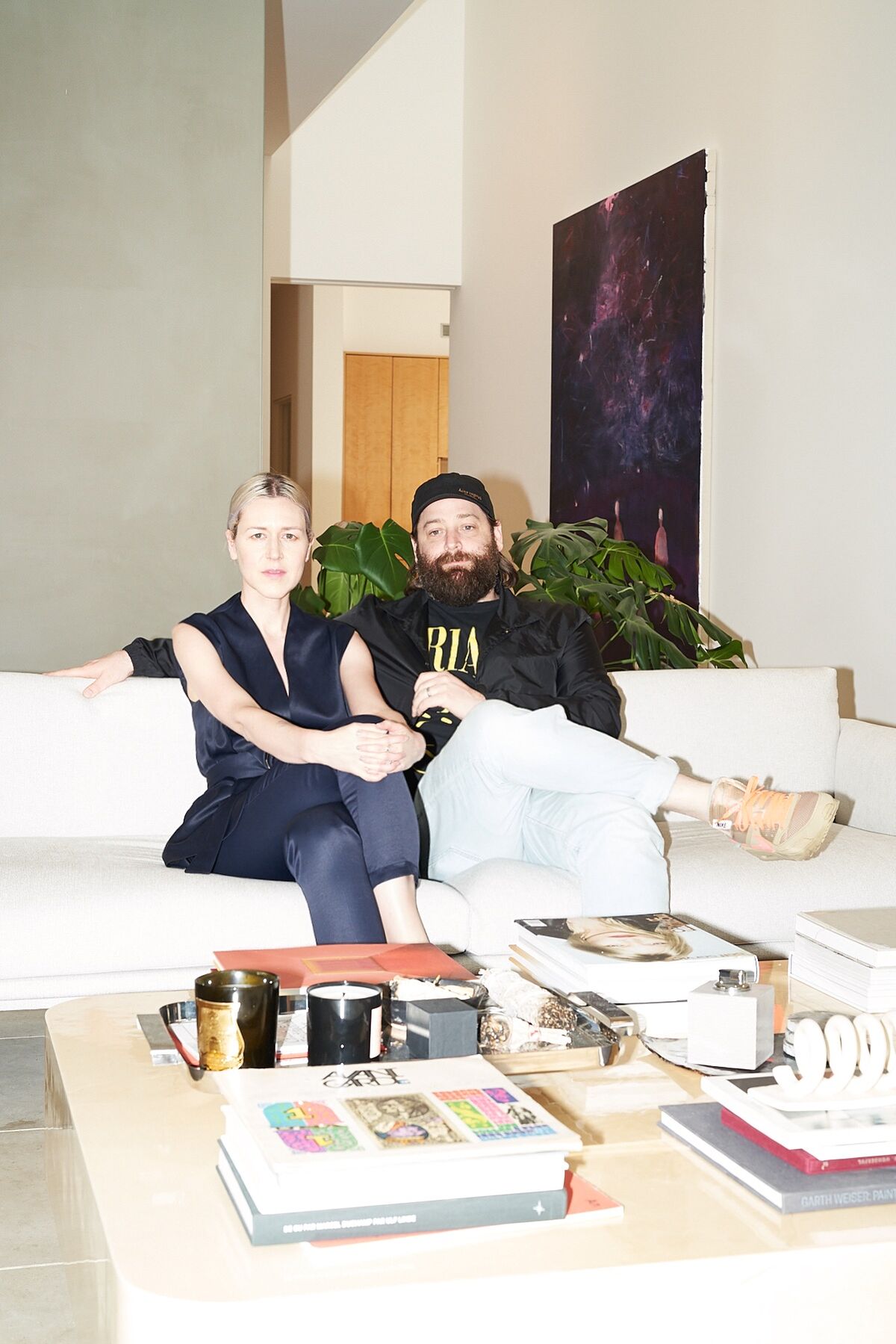 Kristen and Joe Cole in their Dallas home. Photo by Katy Shayne. 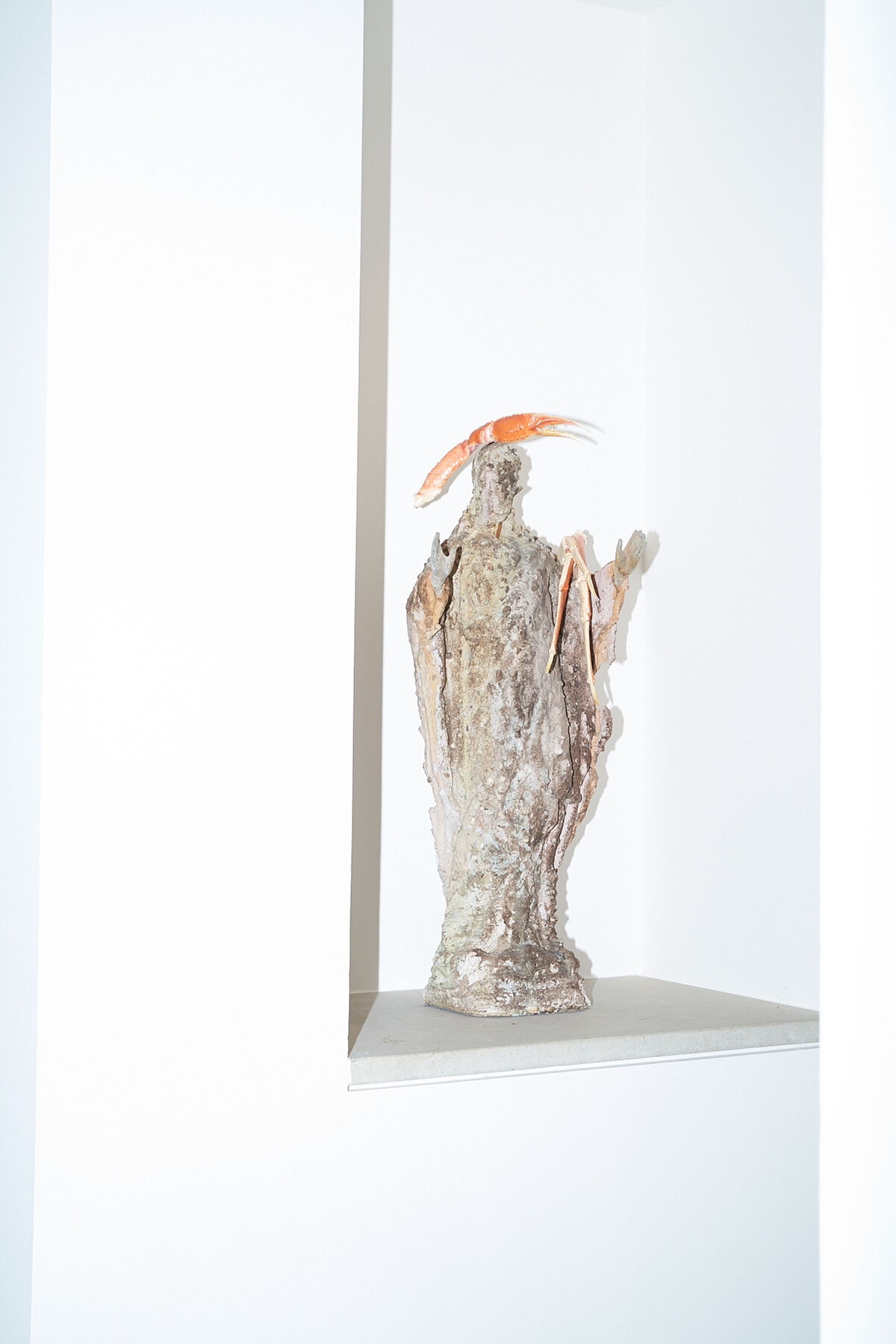 Last August, when the emergent art collecting couple Joe and Kristen Cole moved from Austin to Dallas, they wanted to find a home where they could showcase their developing collection. They are of a new generation of Texas art patrons and buy work by living artists who don’t necessarily have overwhelming market heat in New York and London. The artists they collect are often young women whose work might never end up on the walls of the more staid older guard of the city’s collecting class.
But among the new guard, the Coles are gaining prominence. In a quite literal passing of the baton, the Coles decided to move into the Preston Hollow home built by Howard and Cindy Rachofsky, arguably the city’s foundational art collectors, where they had raised a family amid a revolving display of contemporary art.
“It feels right—it’s a 1990s modernist house built by collectors,” Kristen Cole said while sitting on a white couch in the sprawling living room, which looks out onto a tasteful backyard with a pool, light streaming in from a big glass sliding door. “It’s the only house we looked at in Dallas. We were just like: Done! Easy!” 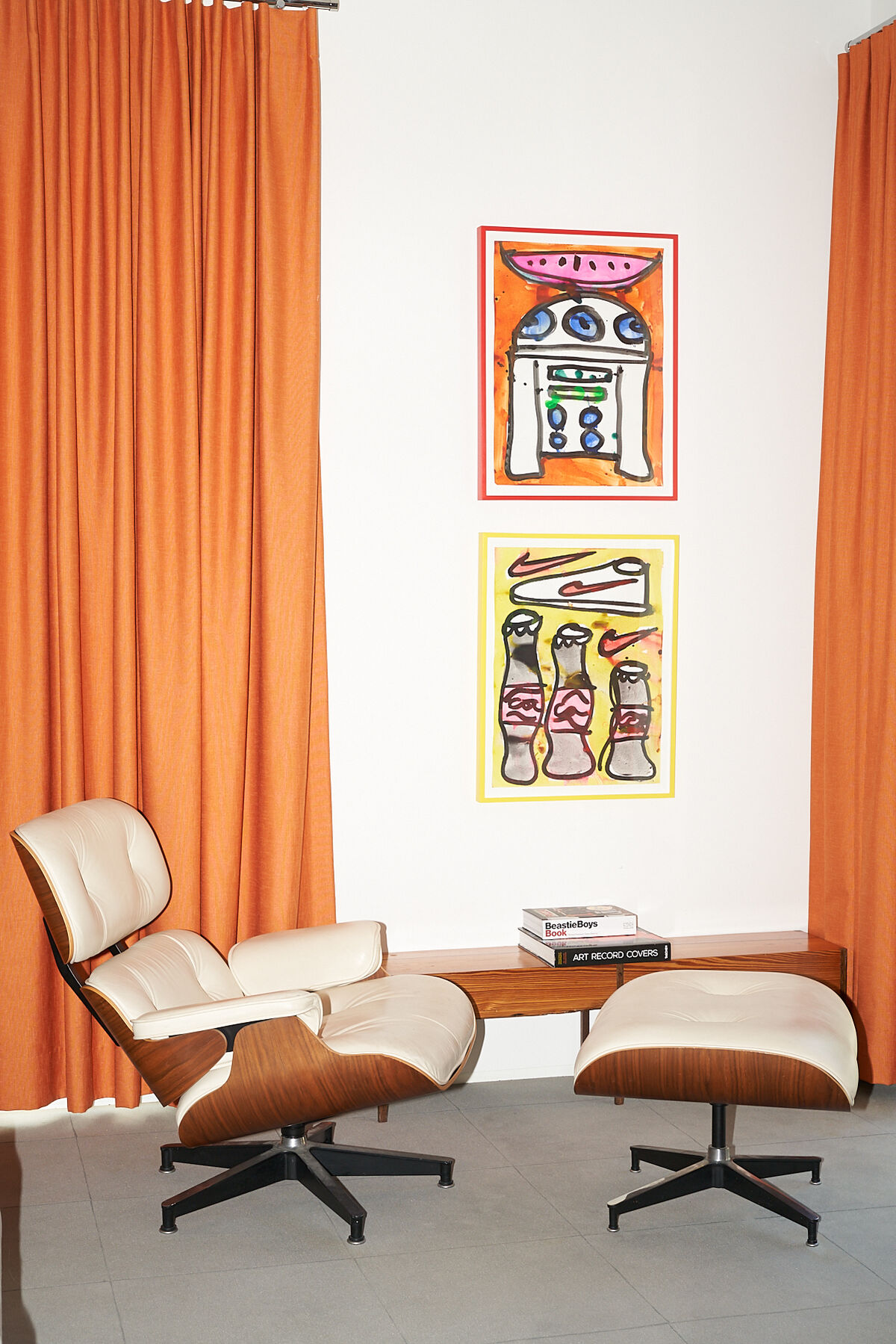 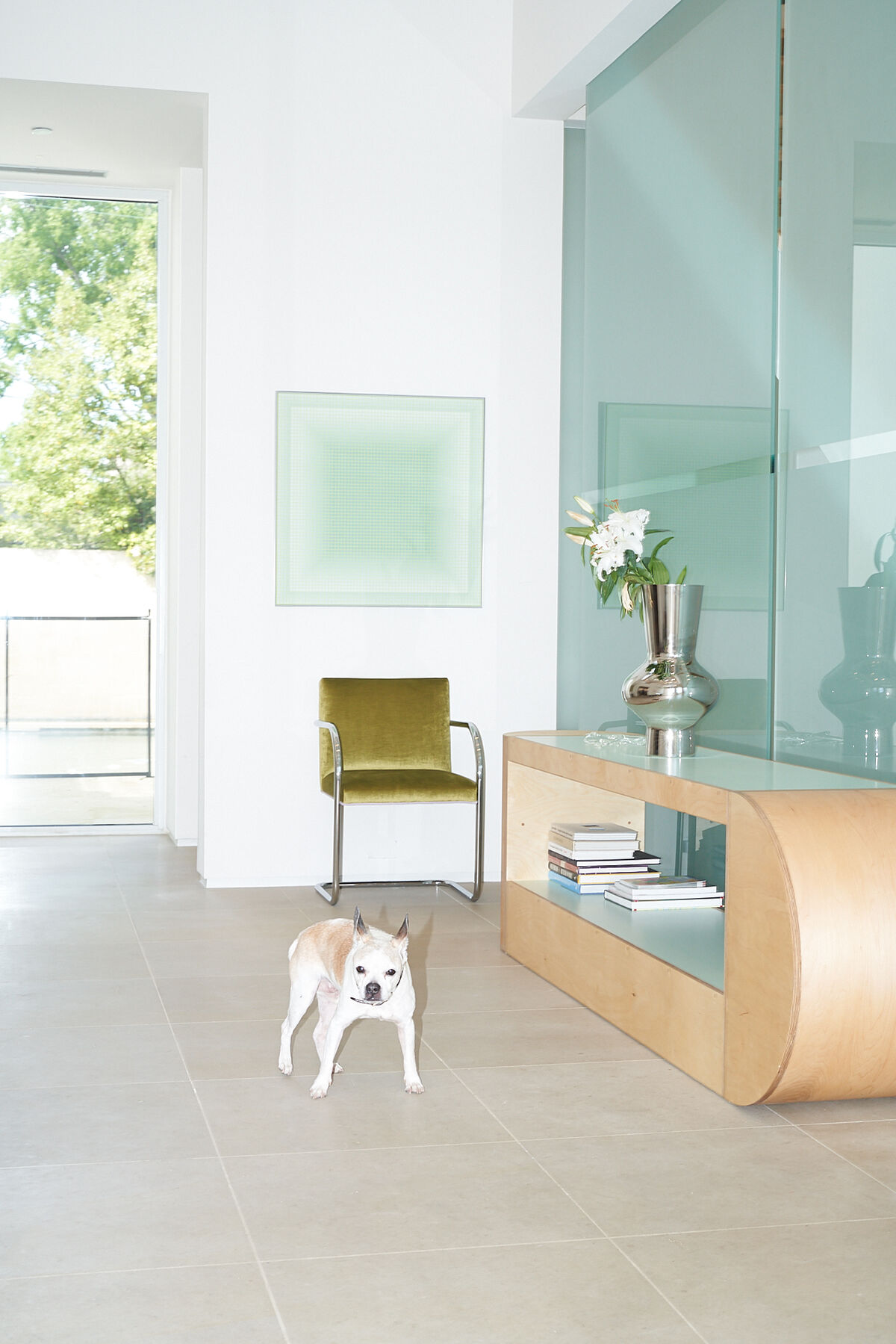 “We love Howard and Cindy,” she added. “Howard was one of the first people we met down here. He really did blow my mind in terms of how thoughtful a collector he is.”
It was a Wednesday afternoon, and the house was abuzz with kids home from school and soccer practice, music humming from the kitchen, and an adorable, extremely enthusiastic French bulldog named Kiki yipping and repeatedly jumping upon the visiting reporter. Kristen had left work early—she is the president and chief creative officer of Forty Five Ten, the Dallas-based high-fashion boutique that just opened an instantly Instagram-famous store in New York’s Hudson Yards. It’s been called the “Millennial generation’s answer to Barney’s” and sells unconventional and hard-to-find wares.
Joe, who works as a creative consultant for Forty Five Ten’s billionaire owner Tim Headington, was wearing a hard-to-cop shirt from a line called Shrits, in which he’s an angel investor—it’s available only in person, and only on Saturdays, at the Marlborough Contemporary gallery in New York’s Chelsea neighborhood. (Max Levai, Marlborough’s principal director, is the brand’s official plus-size model.) Joe’s shirt (or “shrit”) is a spin on the iconic Nirvana shirt, but with “ARIANA” (as in, Ariana Grande) in the original font, and a doughnut instead of the smiley face (a reference to that time Grande got caught on tape licking donuts she wasn’t buying and saying “I hate America.”) It was designed by the artist
Andrew Kuo
, whom the Coles collect, and Marlborough director Pascal Spengemann. 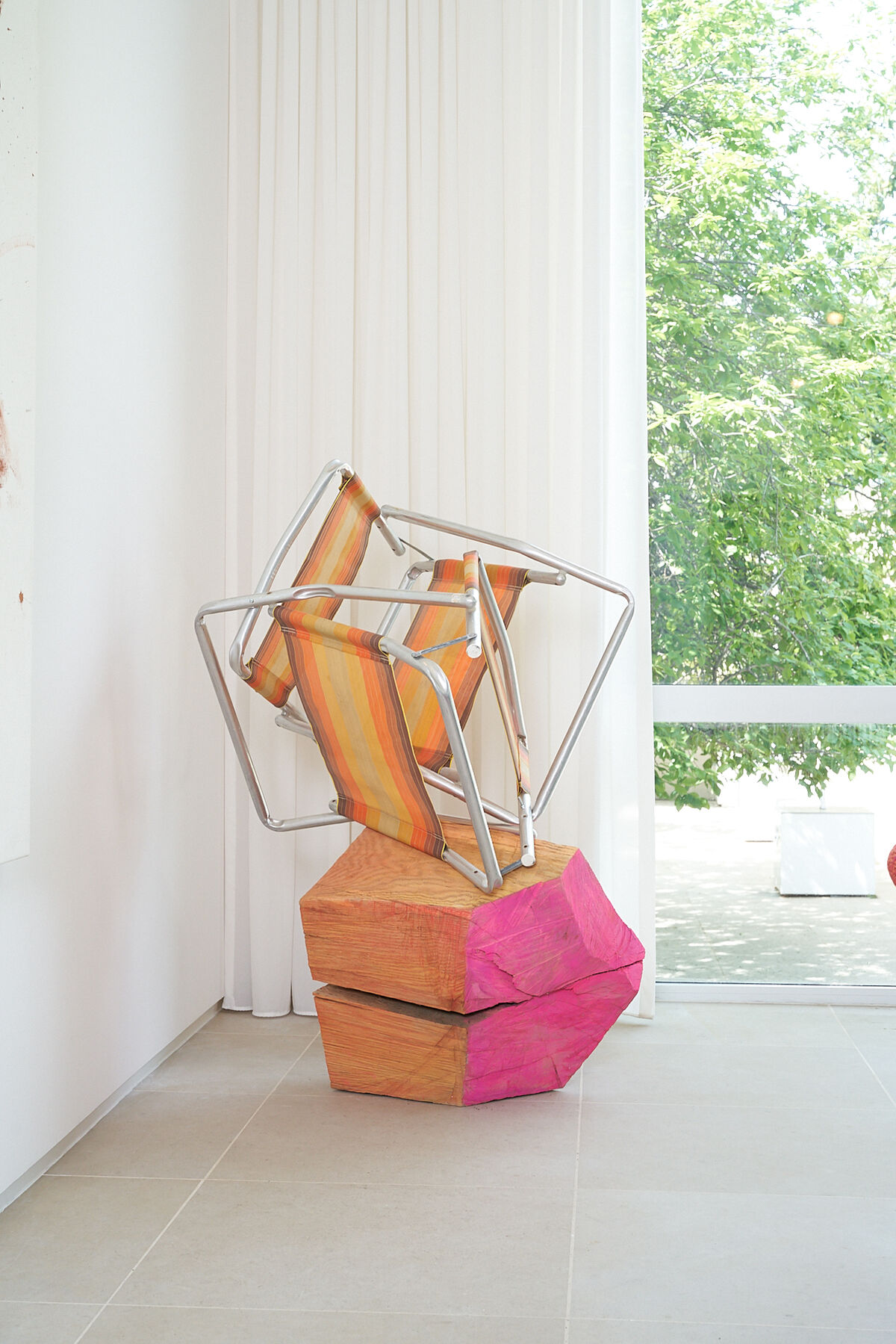 Advertisement
The couple was preparing to receive an onslaught of visitors during the week of the Dallas Art Fair, and their house—which the Rachofskys had modernist maven Lionel Morrison design for them in 1997—is an ideal place to hang and show off art. But the old guard of Dallas collectors tend to buy big, flashy masterpieces by established market juggernauts. Rachofsky buys
Donald Judd
and
Robert Ryman
and once owned
Jeff Koons
’s Balloon Flower (Magenta) (1995–99), before selling it at Christie’s for $25.8 million in 2008. The Coles, however, have worked with a tight-knit crew of dealers to build up a collection reflecting their singular taste.
They started to buy while living in Los Angeles, where, in 2008, the couple founded TenOverSix, a boutique that treated avant-garde accessories and clothing as artworks by placing them in a gallery-like context. The couple moved to Austin in 2015, where they ran the hospitality group ByGeorge while Joe worked for Headington, whose revamped and expanded Joule Hotel opened in Dallas in 2013 with a lobby area overseen by the Coles along with Brady Cunningham, complete with a new outpost of TenOverSix on the premises. In 2018, Headington bought TenOverSix and put Kristen Cole in charge of the entire operation.
And so, after spending 18 months building out a mid-century house in Austin, the Coles had to relocate to Dallas. Not that they didn’t welcome the move.
“Dallas is a much bigger city than Austin, it’s much more connected,” said Joe.
“It’s got an international airport, so that’s a first step,” said Kristen. 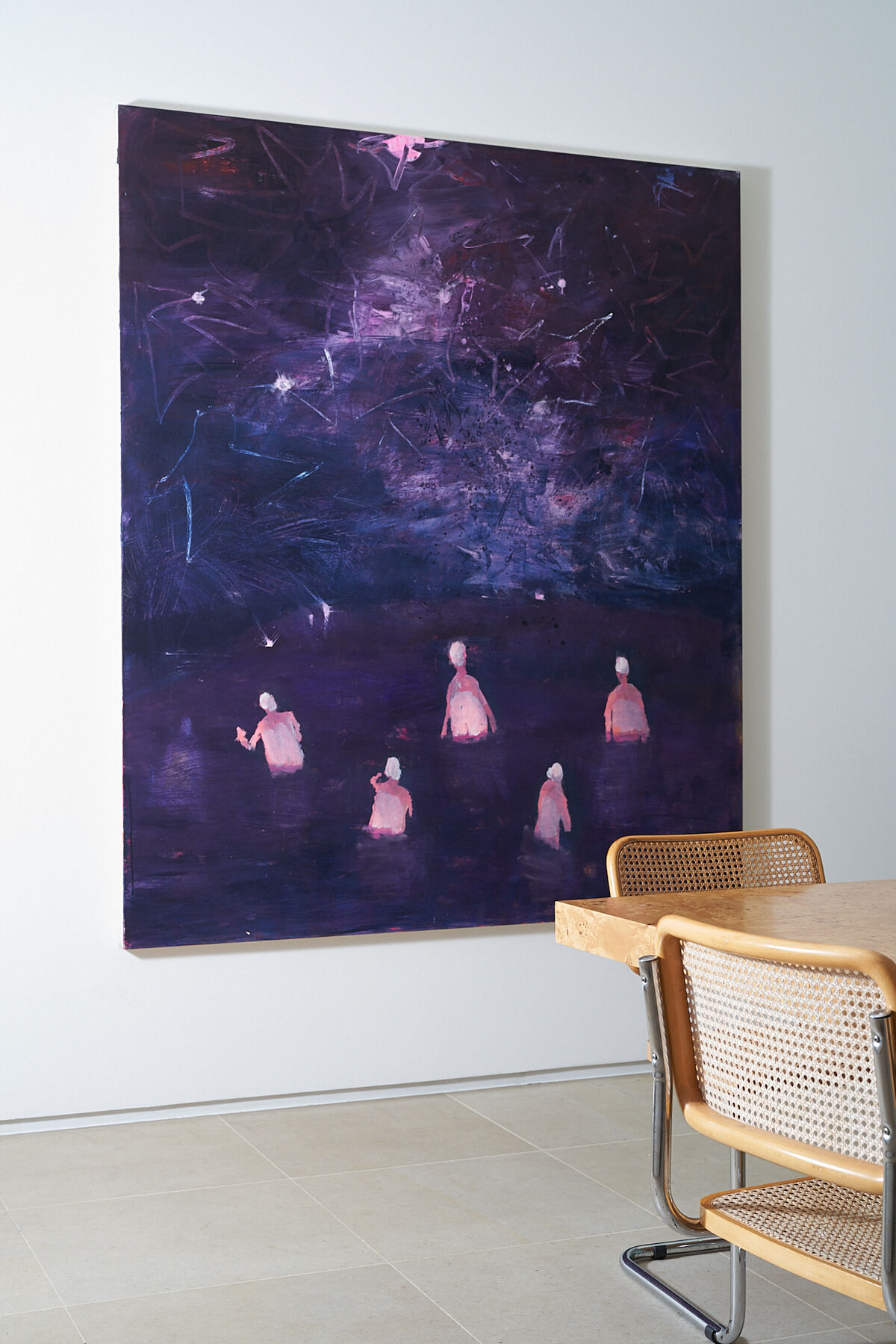 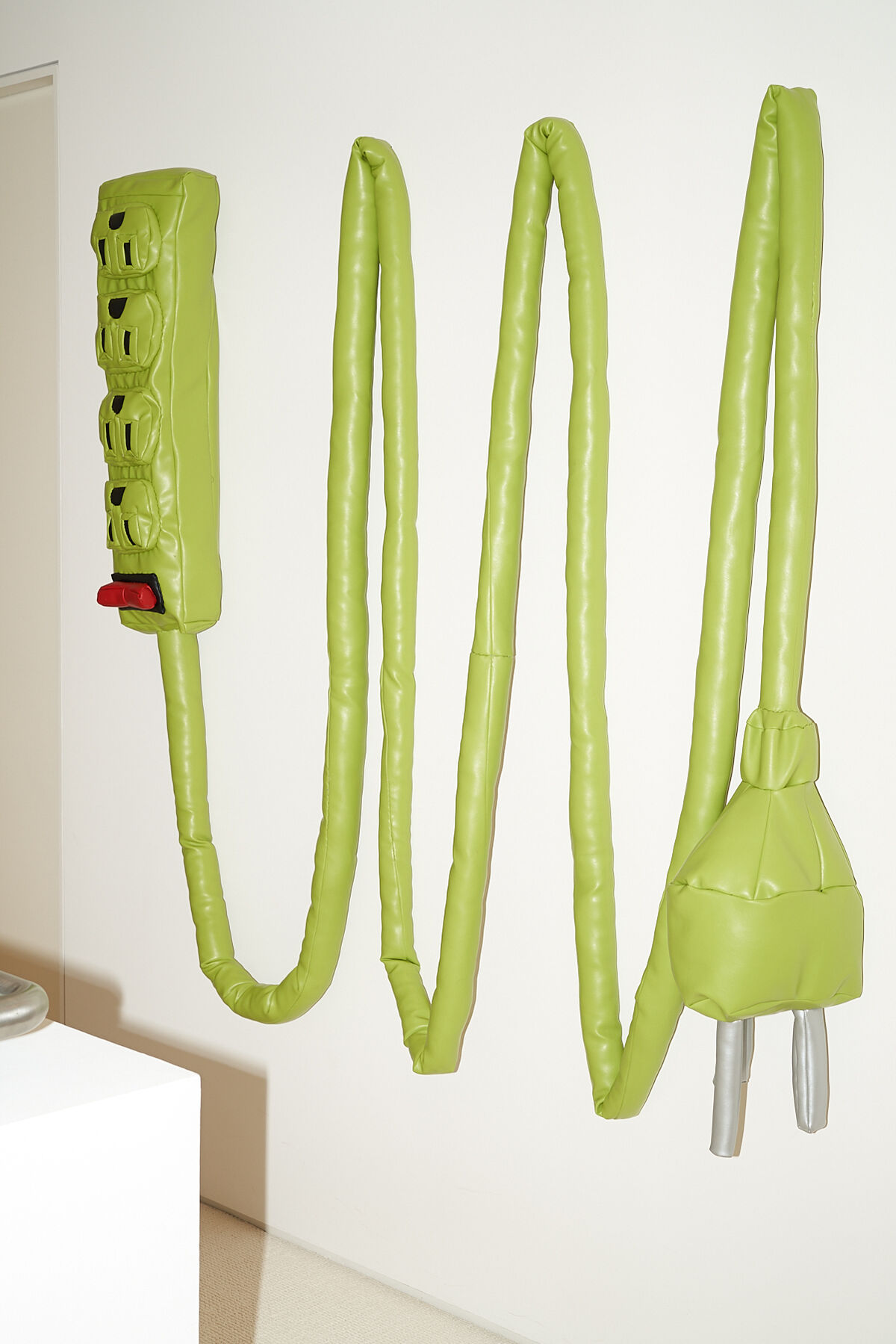 Moving to a city with a well-established collecting culture allowed them to present their formidable collection of work by young artists, which serves as a funkier, hipper counterpoint to the city’s brawnier collections with public-facing exhibition apparatuses such as Deedie Rose’s Pump House, the Rachofskys’ Warehouse, and the Karpidas Collection.
“It started out for us a little bit more with photography—I was a little bit buried under a shoe,” Joe said. “And as we continued to mature and spend more time and more money on things, we started getting into paintings and sculpture. For us, it’s more of a visceral reaction—we don’t put much effort into necessarily deciding if something’s going to be a good purchase or a bad purchase. It’s even more about seeing something, getting a bug, and then I can’t get it out of my head and I start to obsess.”
He added: “Generally that process happens in about five minutes.” 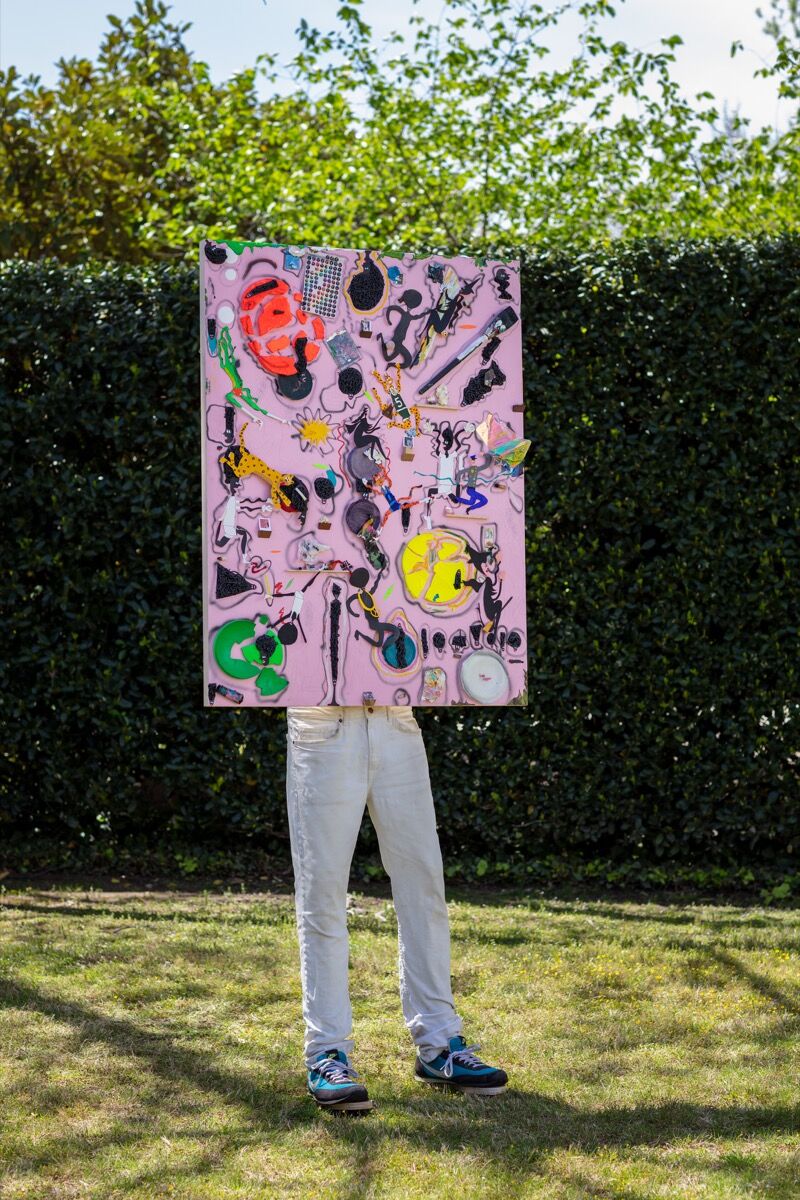 Increasingly, the work the Coles can’t get out of their heads is by emerging female artists. When Kristen came into the main foyer, we embarked on a quick tour while Kiki trotted beside and barked up a storm. Installed right now in Morrison’s 5,800-square-foot, light-filled house are works by
Katherine Bradford
,
Sam Moyer
,
Katherine Bernhardt
,
Margaux Ogden
, and a
Sarah Braman
consisting of a twisty beach chair atop a colorful rock. One of
Al Freeman
’s soft sculptures—a giant pillowy electrical cord given elephantiasis in Oldenburgian fashion—can be seen while walking up the modernist staircase.
“We inadvertently started collecting a lot of female artists,” Joe said. “But then, in the climate that we’ve been in the last couple of years, as we kind of realized that that was happening, we did start to pay a little bit more attention to that and embrace that, and I think that’s been really fun.”
The couple’s taste is already having an impact on the city, or at least on the stretch of downtown where the Headington Companies enjoys its little fiefdom. There’s the usual miasma of events and exhibitions surrounding the Dallas Art Fair, which opened its 11th edition this week in the Fashion Industry Gallery downtown, welcoming nearly 100 galleries from around the world to the land of big wallets and bigger hair; Joe and Kristen were there at the opening, chatting up local cultural figures such as Dallas Contemporary director Peter Doroshenko and Anna Katherine Brodbeck, the tastemaking senior curator of contemporary art at the
Dallas Museum of Art
. Just blocks away, Freeman had opened a show of new work at Forty Five Ten put together by Kristen, who earlier this year unveiled a new installation by Bernhardt that took over the coffee shop in the boutique’s lobby. The Joule is across the street, and in the lobby are new sculptures by
Tony Matelli
, an exhibition Joe had put together with Spengemann, Matelli’s dealer. Matelli is another artist the Coles collect. Entering their house, on the right there is a stone sculpture of Jesus adorned with very realistic-looking crab claws, a sly provocation typical of Matelli. 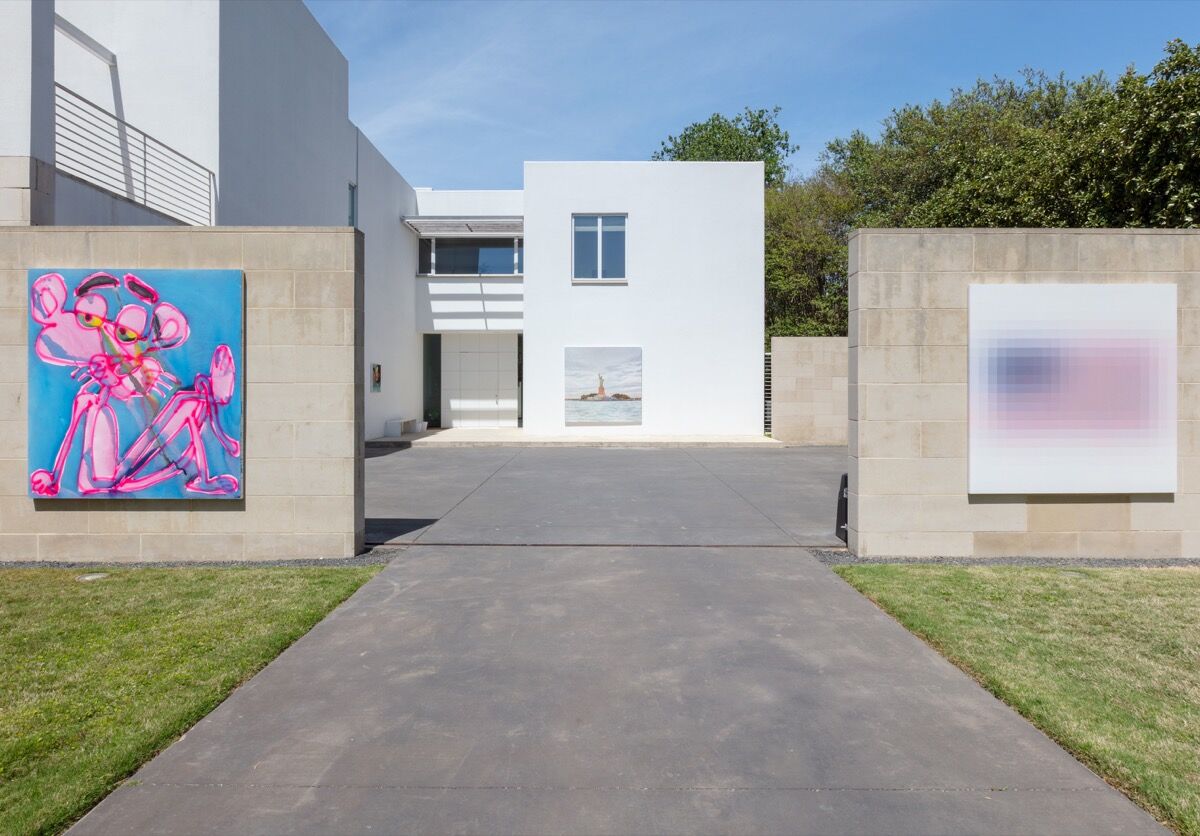 Joe said that while their desire to blend contemporary art and hospitality may be common in New York or L.A., it’s not yet a thing in Dallas. Well-heeled clients stepping into Neiman Marcus—which changed the national fashion retail landscape forever when it opened in downtown Dallas in 1907—don’t necessarily expect to see something like a giant Katherine Bernhardt mural.
“It’s catching on here—in a lot of other markets I don’t think you see this much art in these commercial environments,” Joe Cole said. “As far as Dallas is concerned, it’s been contagious.”
The Coles cooked up one more contribution to the run of events here in Dallas this week: An outdoor selling show of paintings that opened at their house on Friday, with the work being offered to local collectors by galleries representing artists whom the Coles collect. The couple put it together with Marlborough’s Levai and Spengemann, and Canada Gallery’s Phil Grauer and Suzanne Butler.
“Pascal and I were talking at one point, saying, oh, we’re going to be here all week—how can we expand what we’re doing at the fair?” Joe said. “And you know they have the Bridge outdoor art fair in the Hamptons, and he had this idea about putting paintings outside of someone’s house. I said, ‘I have a house.’” 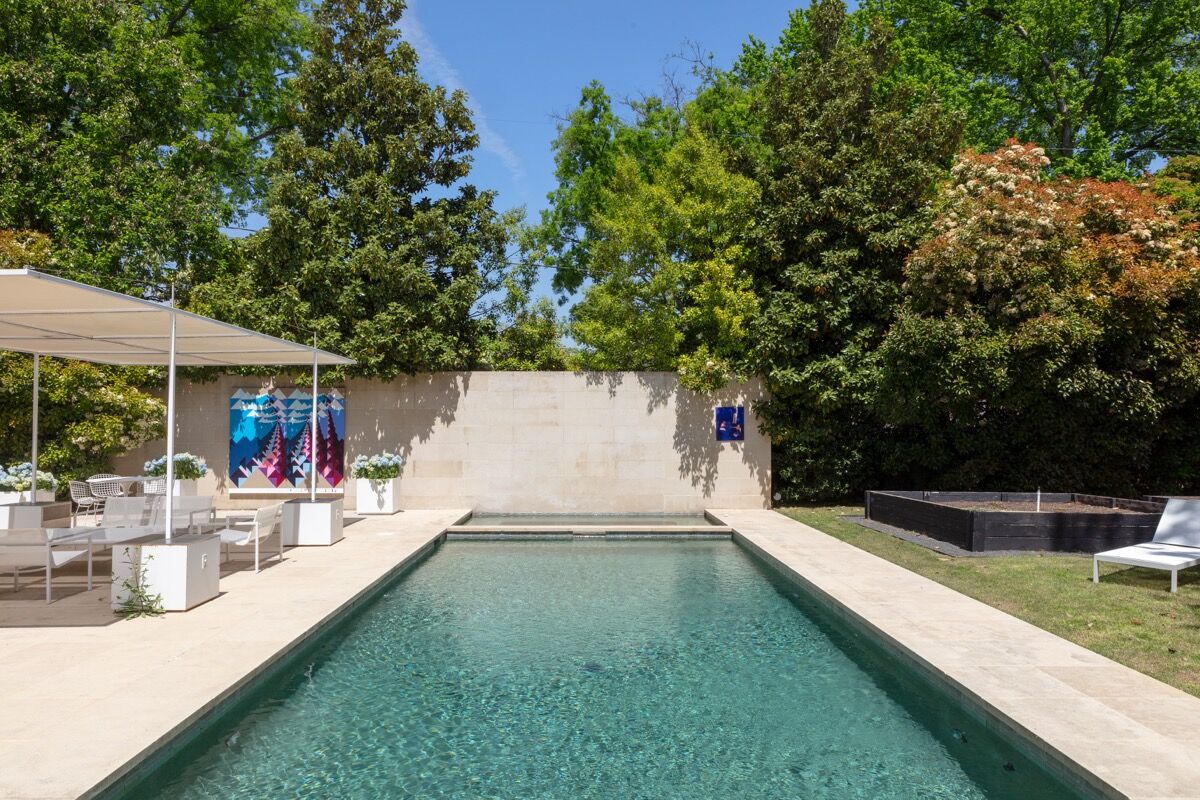 Paintings are not typically installed outside due to, you know, the high chance of a common weather occurence that can destroy them. As Joe put it Wednesday, “It’s a certain element of risk as, if it rains, it doesn’t happen, which I think is part of the fun of it.” But by 3 p.m. Friday afternoon, with no rain clouds on the horizon, a few dozen people were drinking margaritas and Modelos, eating chips and queso, and taking in the large works by Bernhardt, Bradford,
Greg Bogin
,
Devin Troy Strother
,
Mark Flood
, and more. Others were sitting poolside, basking in the sunshine.
Kristen mentioned Wednesday they were hoping neighbors would come, and said some of the attendees would be close enough to walk. But Preston Hollow is the epitome of the Dallas old guard, home to billionaires Ross Perot, T. Boone Pickens, and Mark Cuban. The home of George W. Bush, 43rd president of the United States, is a 10 minute walk from the Cole house.
But the outdoor painting show, featuring many of the same artists the Coles collect, was geared toward the Dallas collectors of the future—the crowd on Friday was lively and young, not the typical Preston Hollow scene. And the show offered collectors pieces that could push them to collect work by living, vibrant artists—the new guard fully taking over the former home of a pillar of the old guard.
“We have a few friends who are collectors or advisors and we’re all kind of in the same conversation,” Kristen said. “And maybe we’re at different levels here and there, but I think we are the next generation of people who are going to continue this.”
Nate Freeman
Related Stories 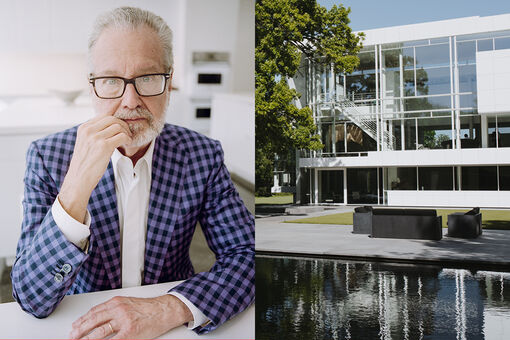 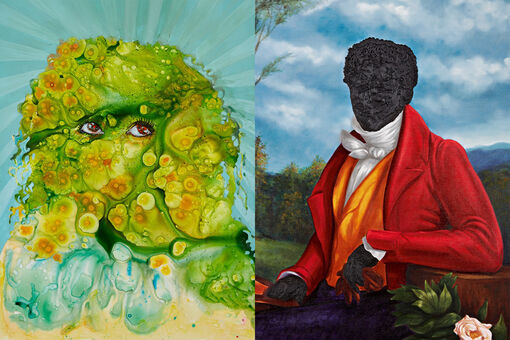 8 Artists Who Had Breakout Moments at Auction This Fall
Benjamin Sutton
Oct 30, 2020 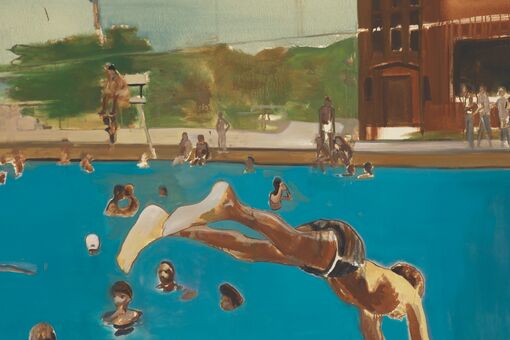 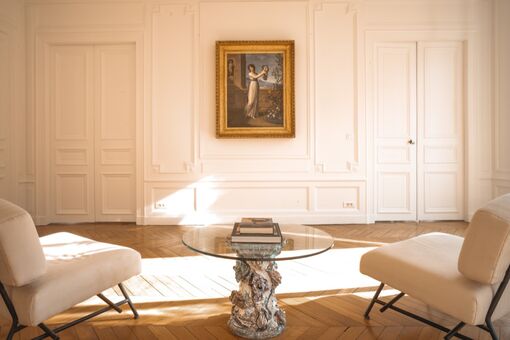 Why These Dealers Are Focused on Selling One Work at a Time
Annie Armstrong
Oct 29, 2020