Since collectors Bernard Lumpkin and Carmine Boccuzzi became parents to twins Lucy and Felix just over a year ago, they have fully integrated the spheres of art and babies in their lower Manhattan apartment, which is filled with works by contemporary African-American artists and mid-century design. “We have a lot of playdate-artdates,” says Lumpkin, who likes to photograph artists, including
Brenna Youngblood
and
Samuel Levi Jones
, holding the babies in front of their works in his home. Art fills the kids’ playroom, presided over by a
Kara Walker
silhouette cutout of a little girl doing something mischievous with a pig. And Lucy and Felix even have their own mini
Isamu Noguchi
Cyclone table and
Harry Bertoia
chairs scaled for toddler-size tea parties.
In the adjacent living/entertaining space, with a grownup table by Brazilian designer Arthur Casas in the shape of a giant guitar pick that can seat 16 comfortably, the collectors have hosted fundraising events for Prospect New Orleans and the Aperture Foundation. Old toys, tools, and rusty wires protrude from a large unframed
Leonardo Drew
grid relief hanging just over the plush 1970s
Milo Baughman
sofa, but the twins haven’t made a grab for it yet. “Whether they love the art, that remains to be seen,” Lumpkin says. “But so far, they are happily coexisting with it.” 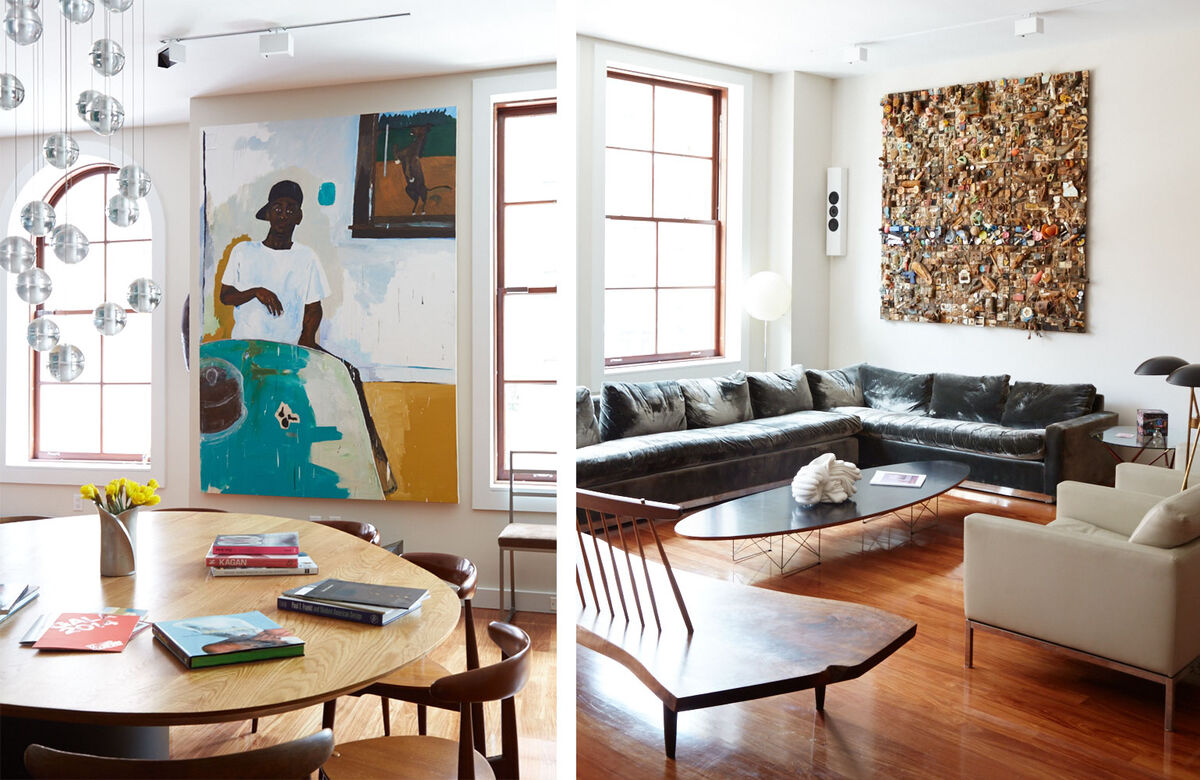 The collectors, who got married in 2011 on the first day of legalized gay marriage in New York, met as undergraduates at Yale University 26 years ago. After Lumpkin finished his PhD in comparative literature at Harvard in 1999, he became a producer in MTV’s news and documentaries division and joined Boccuzzi, now a partner at the law firm Cleary Gottlieb Steen & Hamilton, in New York. Lumpkin spearheads their collecting, which began over a decade ago with early acquisitions of photographs by
Lyle Ashton Harris
and works on paper by
Wardell Milan
, but Boccuzzi often makes the final call on which piece to acquire by a given artist.
“The focus on artists of color grew out of a desire to understand what it means to be black in this society,” says Lumpkin, whose father was African American and mother a Sephardic Jew from Morocco. “Based on my sister’s appearance, people more readily identify her as African-American than they do me. So I had a different experience growing up in La Jolla, where there wasn’t a lot of diversity. I was able to ‘pass,’ with everything that means as a cultural experience.” 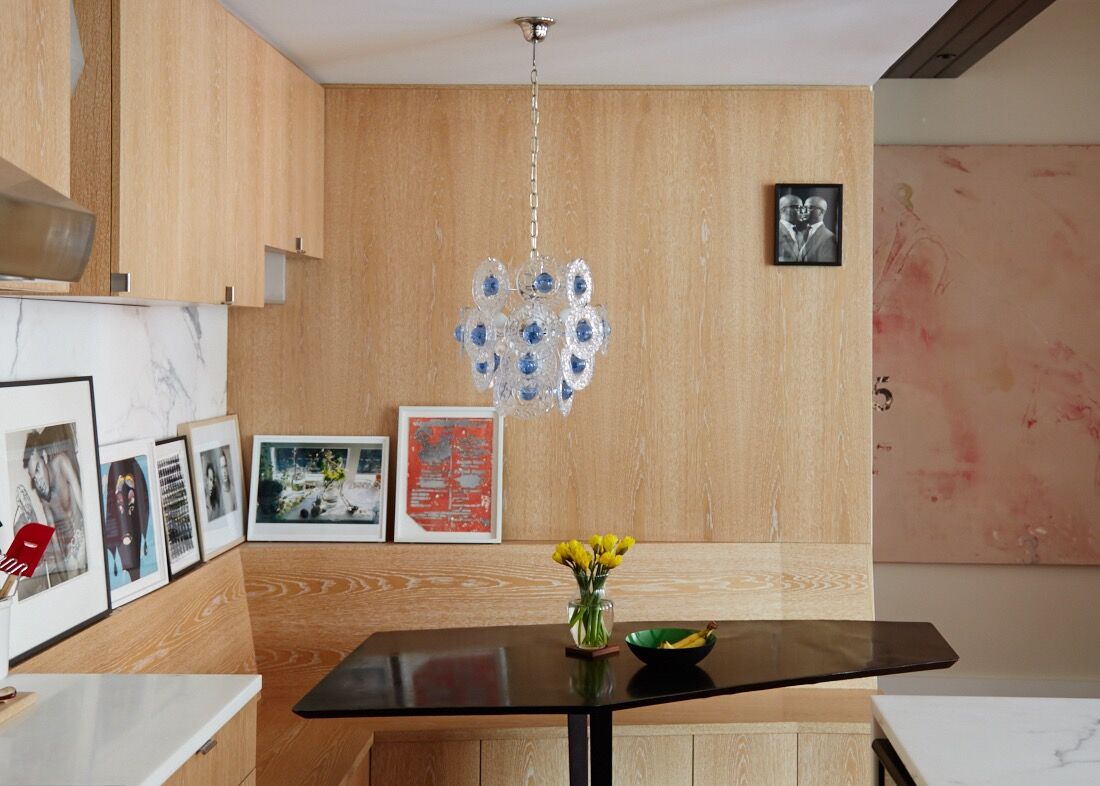 Advertisement
After his father died in 2009, Lumpkin left MTV and deepened his commitment as a patron of artists and institutions. “Having lost my father, it became more urgent that I make that aspect of my heritage part of my everyday life,” Lumpkin explains, adding that he also wants Lucy and Felix to understand their African-American lineage. Lumpkin is a trustee at the Studio Museum in Harlem; he serves on the Print and Education committees at the Whitney Museum of American Art; and at the Museum of Modern Art, he produces public programs for the Friends of Education, which promotes African-American art at the institution.
His MoMA group has organized programming around the debut of 1:54 Contemporary African Art Fair New York, running from May 15 to 17. “The focus right now on contemporary African artists in Okwui Enwezor’s show at the 56th Venice Biennale is carrying over here,” Lumpkin notes. He and Boccuzzi also collect works by artists from the greater
African diaspora
, including
Lynette Yiadom-Boakye
and
Njideka Akunyili Crosby
. “Museums that are focusing on African-American work also have to consider the role and influence of African art within the larger conversation,” he says. 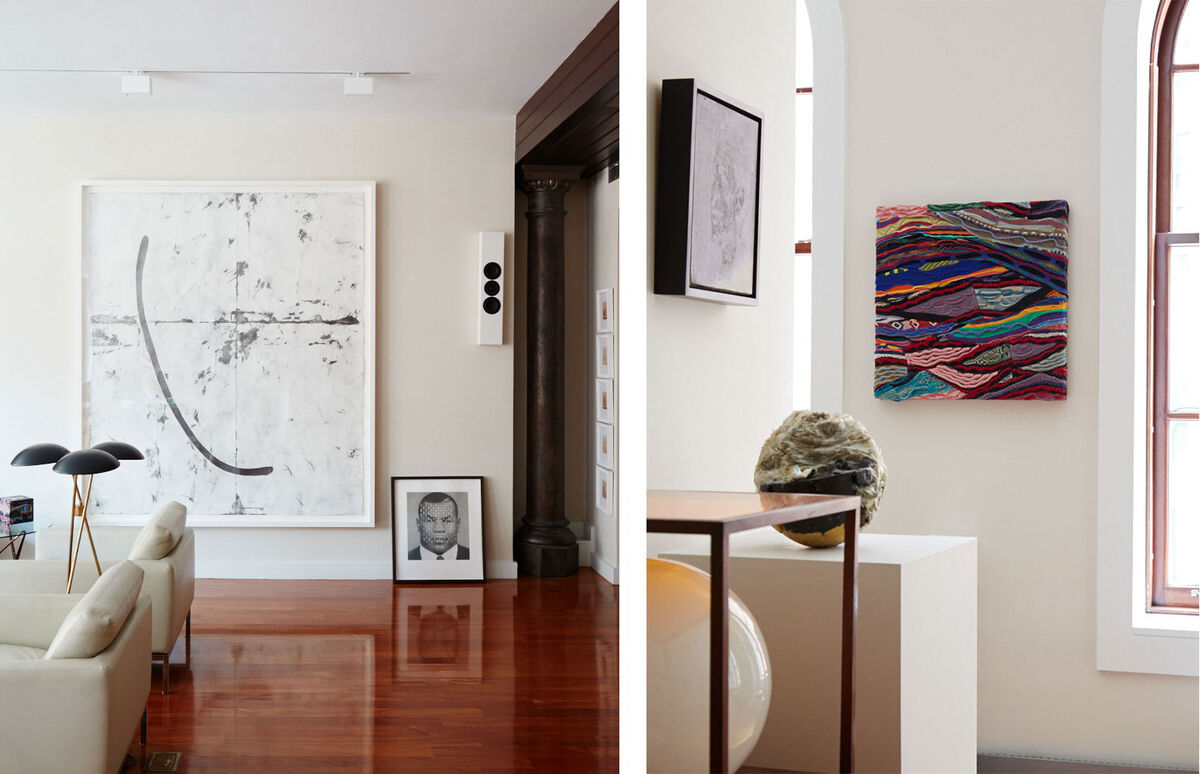 Today, the couple’s collection numbers close to 500 works, split between their apartment and Cleary Gottlieb’s offices (with pieces also on loan to museum exhibitions). Figurative works by artists like
Henry Taylor
,
Mickalene Thomas
, and
Kerry James Marshall
are interspersed throughout the apartment with abstract pieces by
Rashid Johnson
,
Tony Lewis
,
Hugo McCloud,
and
Angel Otero
and free-edge wood furniture by
George Nakashima
that holds its own with the art. “For a long time, African-American artists were expected to make work about struggle, and artists working in abstraction faced resistance within their own communities because they didn’t represent what was happening in the world in an obvious way,” Lumpkin says. Both traditions are honored in the collection. He points to a photograph of a black man being asphyxiated in plastic by
William Pope.L
, an influential artist to many in thinking about race and performance, including Lumpkin’s sister, a performance artist who goes by the name Narcissister. One of her self-portraits in a mask hangs nearby.
The couple returns frequently to their alma mater, where Boccuzzi serves on the Yale drama school’s board of advisors and Lumpkin often does studio visits with graduate students in the MFA program. “I love to listen to them talk through problems related to their practice, and I try to be a sounding board and a connector to their next step,” says Lumpkin, who met both
Jennifer Packer
and Njideka Akunyili Crosby while they were still students. Figurative canvases by each of those artists hang in the playroom. Crosby, who is from Nigeria, is currently in the 2015 Triennial: Surround Audience at the New Museum and recently signed with Victoria Miro in London. 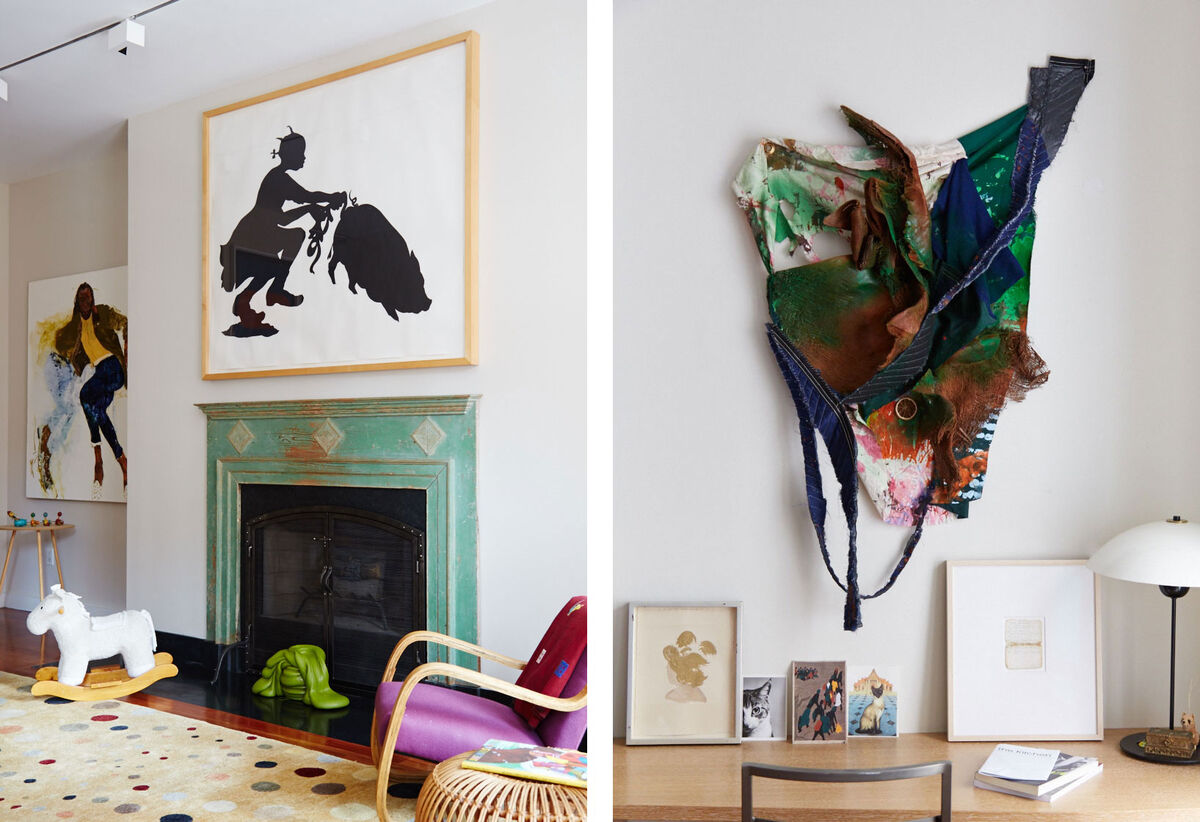 Lumpkin plans to use the 1:54 art fair to do more legwork and research on contemporary African artists, in consideration both for his own collection and for institutions. In 2012, the couple acquired a photograph for MoMA by
Zanele Muholi
from her series documenting black lesbian and transgender women in South Africa, the first piece by the artist to enter the museum’s collection. A show of Muholi’s work has just opened at the Brooklyn Museum. Dubbed a “black art ambassador” by one of his  friends, Lumpkin says that “with whatever institution I’m involved with, I try to foreground what needs to be done as far as artists of color. I see my advocacy for black artists as a kind of art activism.”
Hilarie M. Sheets