The Complex Meanings behind Hand Gestures in Buddhist Art 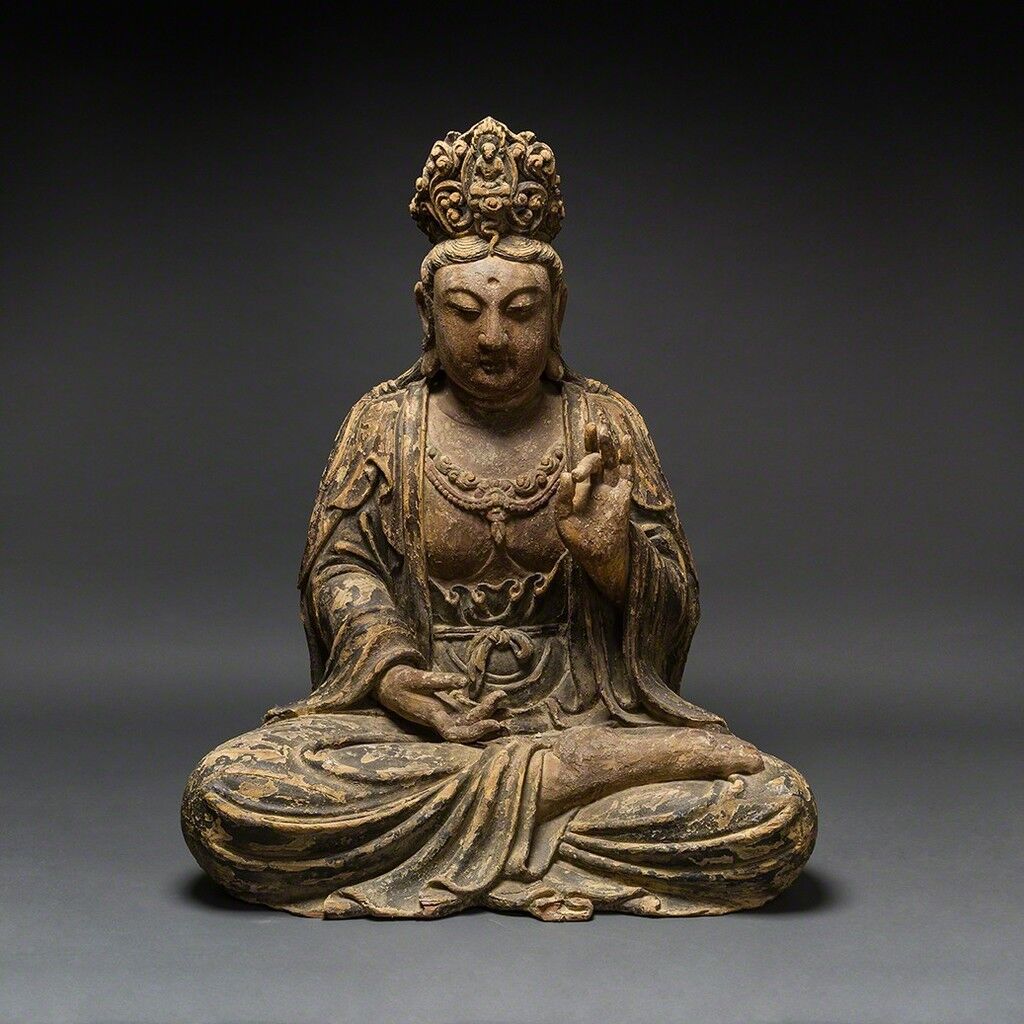 Unknown Chinese
Ming Wooden Seated Bodhisattva, 1368-1644
Barakat Gallery
To understand
Buddhist art
is to understand a rich language of vibrant colors, intricate jewelry, and symbolic gestures. One facet of its sweeping lexicon, mudras, or hand gestures, offer a framework to begin to unpack the nuanced visual culture of one of the world’s most widely practiced religions.
The term mudra literally translates to “seal,” like a stamp, explained Elena Pakhoutova, curator at the Rubin Museum, in an interview with Artsy. But the primary function of these gestures is not a visible one. Mudras are “an embodiment of internal processes that can also be externally observed,” Pakhoutova said, adding that depictions of mudras are easily understood by people who practice Buddhism and are familiar with the states of mind the gestures indicate.
Ranging from the poetic and complicated Wheel of Dharma mudra to the prosaic, universal prayer symbol, mudras reference anecdotes from the historical Buddha’s life and convey elements of Buddhist practice like meditation and teaching. Some gestures, like the meditation mudra, may be familiar to those who practice yoga.
Buddhism was founded in the 6th century B.C.E. by Siddhartha Gautama, who was born in present-day Nepal. After his enlightenment, he became known as Shakyamuni, or the historical Buddha. (A common misconception is that there is only one Buddha; Shakyamuni is but one of several significant Buddhas, including Amitabha and Amoghasiddhi.) Over the millennia, his teachings spread across East Asia, evolving into multifaceted sects along the way. Today, about 488 million people around the world practice Buddhism, most in one of the three major traditions: Theravada, Mahayana, and Esoteric.
Esoteric sects, found largely in Tibet and Japan, use mudras most extensively, both in practice and in art. Hand gestures are used by Buddhas, monks, practitioners, and bodhisattvas—beings who have delayed enlightenment to help guide those on earth in attaining it. Bodhisattvas appear only in imagery from the Esoteric and Mahayana traditions. In the Theravada tradition, which is common in Sri Lanka and Myanmar, mudras are usually limited to the gestures associated with Shakyamuni.
Of the hundreds of extant mudras and their myriad readings across cultures, here, we describe seven of those most commonly found in Buddhist art. The names of the gestures are given in Sanskrit, the language of early Mahayana Buddhist texts, and are accompanied by English translations. 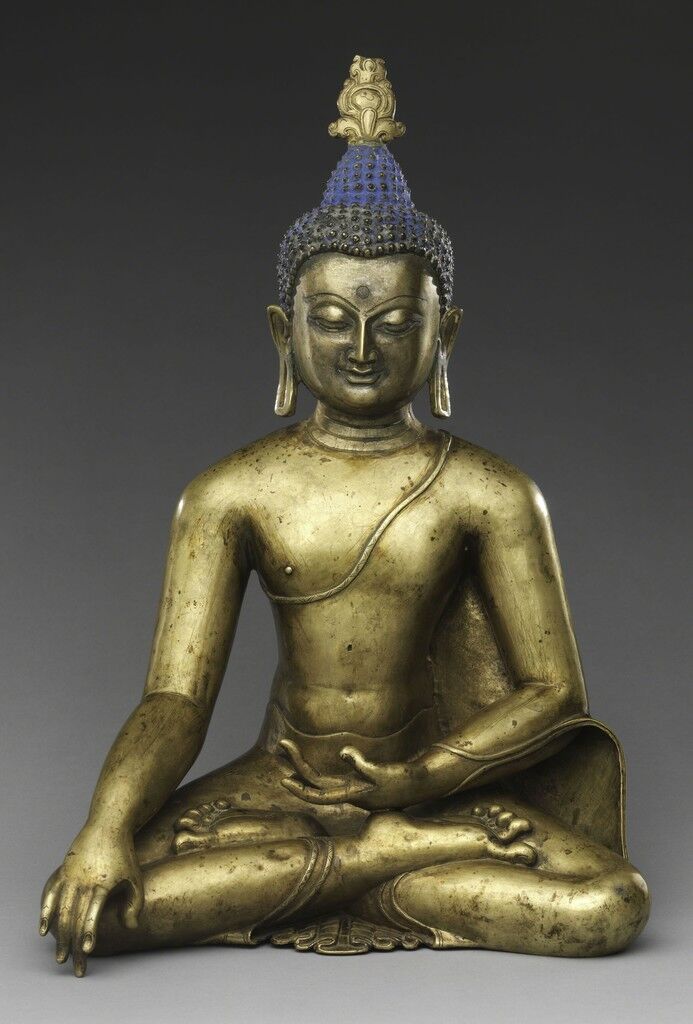 Seated Shakyamuni Buddha, with hands in Bhumisparsha mudra, ca. 751
Near Gyeongju, North Gyeongsang province, Korea
According to Buddhist retellings, the moment Shakyamuni became the Buddha, he pointed toward the Earth, calling it to bear witness to his enlightenment. “That’s what it’s all about; enlightenment is the goal of all Buddhists, so it’s the most frequent mudra you’re going to see,” Adriana Proser, curator of traditional Asian art at the Asia Society in New York, told Artsy.
The gesture—left palm in the lap, facing up, while the right hand rests on the right knee, palm down and fingers pointed down—is only seen in seated statues. Unlike many of the other mudras—which are shared among Buddhas, bodhisattvas, priests, and practitioners alike—in most traditions, this position is unique to Shakyamuni.
Shakyamuni uses this same gesture in multiple iterations of his story. As he approaches enlightenment, the demon Mara tries to throw him off course, sending women to seduce him and detract from his meditation. In one version, Shakyamuni responds by pointing his hand to the ground to call on the gods, who rise out of the ground to kill Mara’s demon army. In another, having retained his concentration, Shakyamuni uses this same motion to call upon the Earth to legitimize him as beholder of the Bodhi throne.

Dharmachakra, the Wheel of Dharma mudra 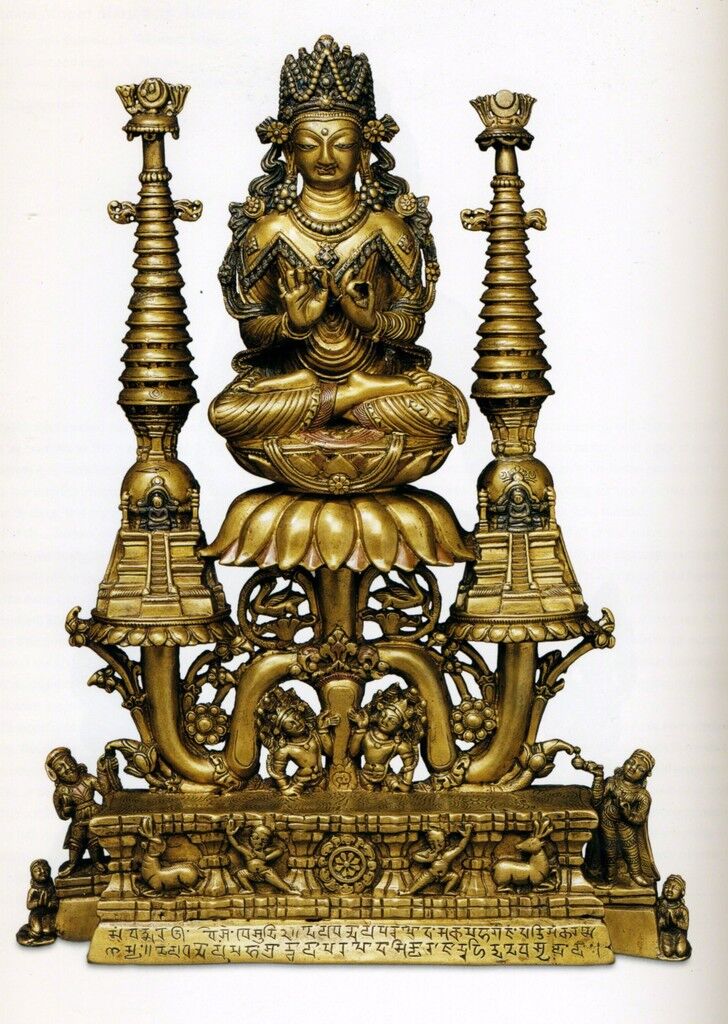 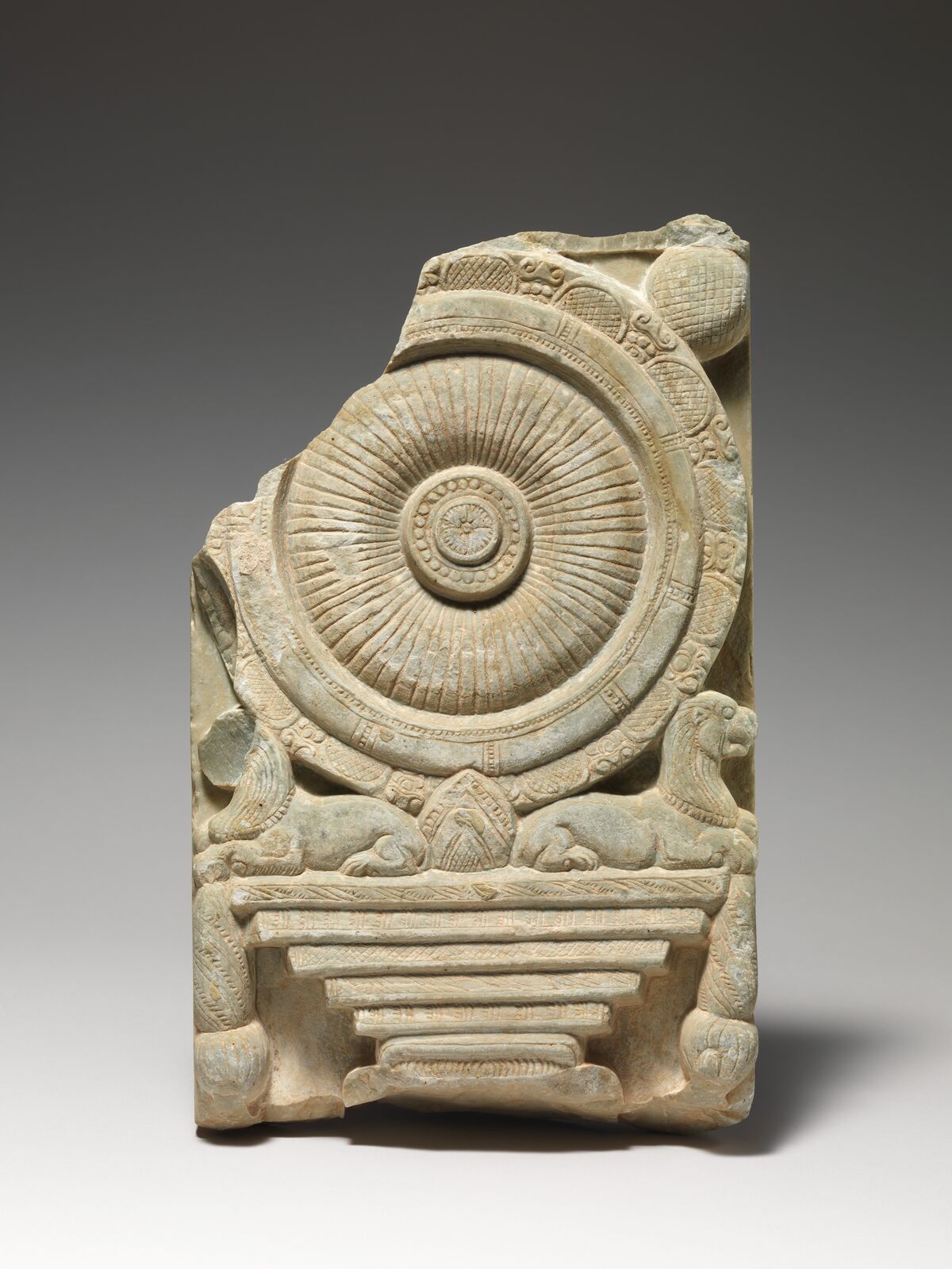 Advertisement
Each Buddhist sect has its own visual language, but there is some iconic imagery that transcends them. “Sri Lankan Buddhists may not necessarily find Tibetan Buddhism that legible,” Pakhoutova explained, “but some of these universal mudras…could be quite easily understood [by all].” The dharmachakra mudra, which calls to mind the Buddha’s first sermon at Deer Park after defeating Mara, has this strong significance across sects.
Formed by joining the thumbs and forefingers of both hands in a wheel shape, the gesture evokes a sense of motion and wholeness. In Buddhism, the wheel represents the perfection of Buddhist law. It also suggests the transmission of the law to sentient beings through an unending, cyclical process of teaching and learning.
The mudra can also be applied to Shakyamuni more directly. Shakyamuni is sometimes referred to as dharmacakravartin, or “he who puts the wheel in motion,” E. Dale Saunders notes in Mudrā: A Study of Symbolic Gestures in Japanese Buddhist Sculpture (1960). “As [the wheel] passes through the world, [it] crushes all evil, all error, all enemies of the Law,” he writes. 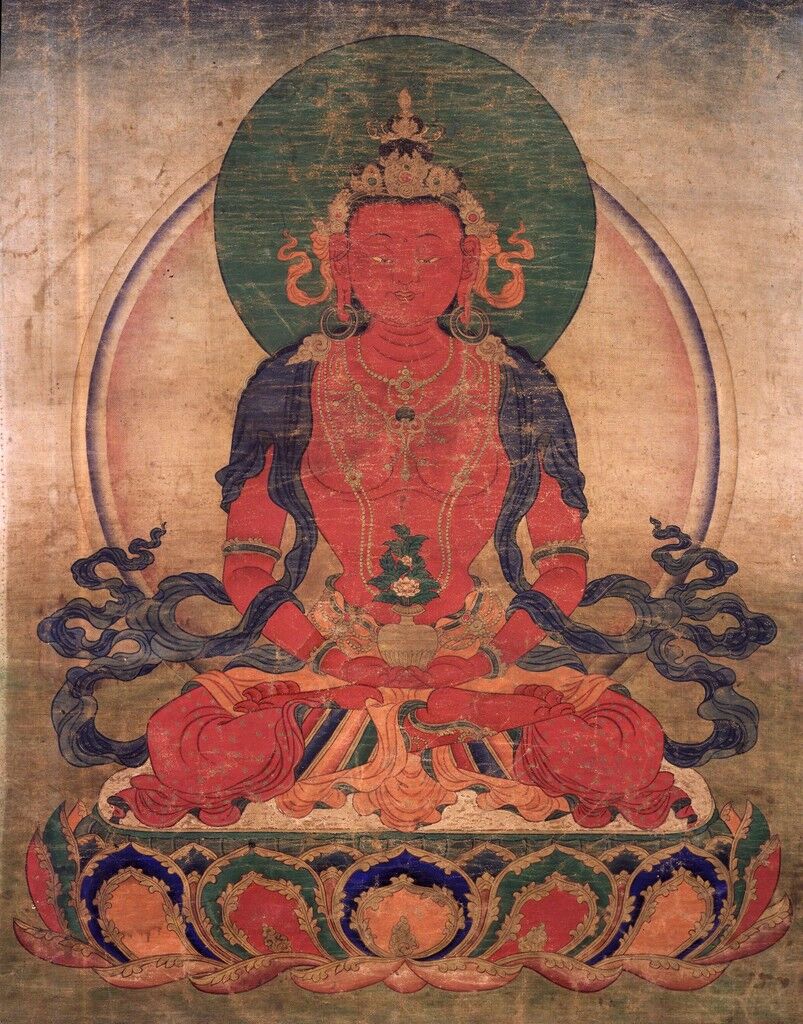 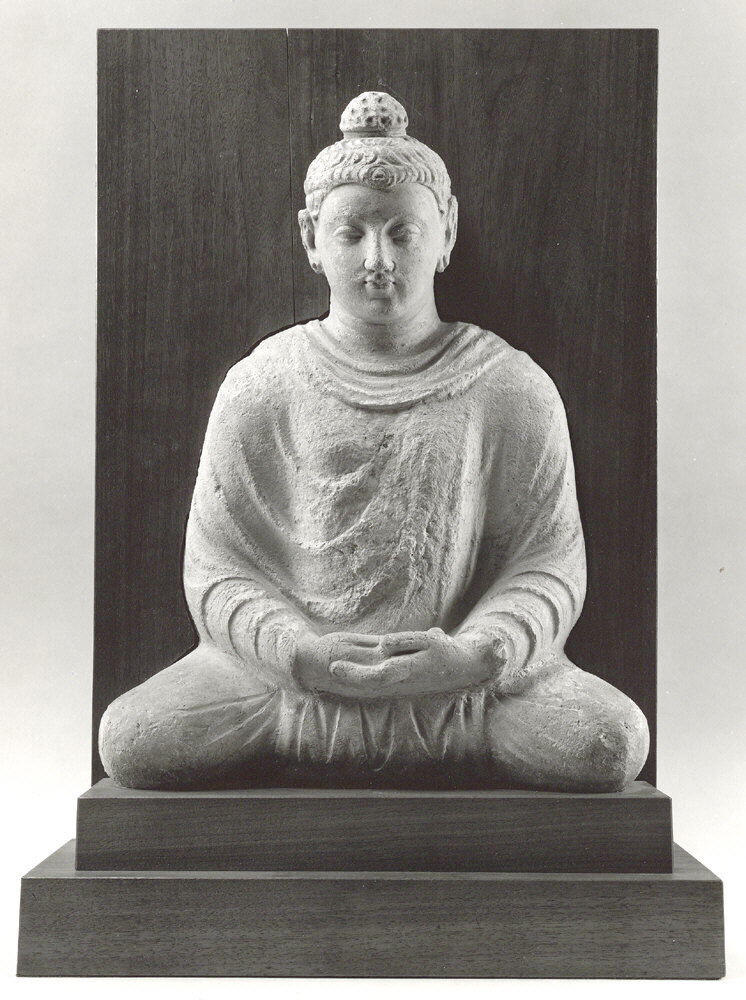 The dhyani mudra is connected to Indian samādhi, the practice of intensely meditating on a single object in order to become completely absorbed in thought. The position functions as a way of entering a state of deep concentration, and has also become a visual shorthand for stillness and relaxation.
Only seen in seated statues, dhyani is usually done in the kekka fuza posture—right foot sole up against the left thigh, while the back of the right hand rests on the upturned palm of the other, and the thumbs touch. In Buddhist imagery, the fingers of this position have three forms. In the first, which originated in India, the fingers remain flat. In the second, which is common in Chinese Wei Buddhism, the thumbs join in a triangle shape. This may symbolize the mystical triangle yoni—the womb of all things—or tri-ratna (Buddha, doctrine, community). In the third iteration, seen in Japanese Esoteric imagery, the last two phalanges of the index fingers are in a vertical position, pressed against each other.
According to Proser, in dhyani, the top hand symbolizes enlightenment, and the bottom, the world of appearances. Shakyamuni is said to have been in this posture when Mara came to torment him, and in Buddhist practice, bodhisattvas, priests, and monks take this posture to recall Shakyamuni. 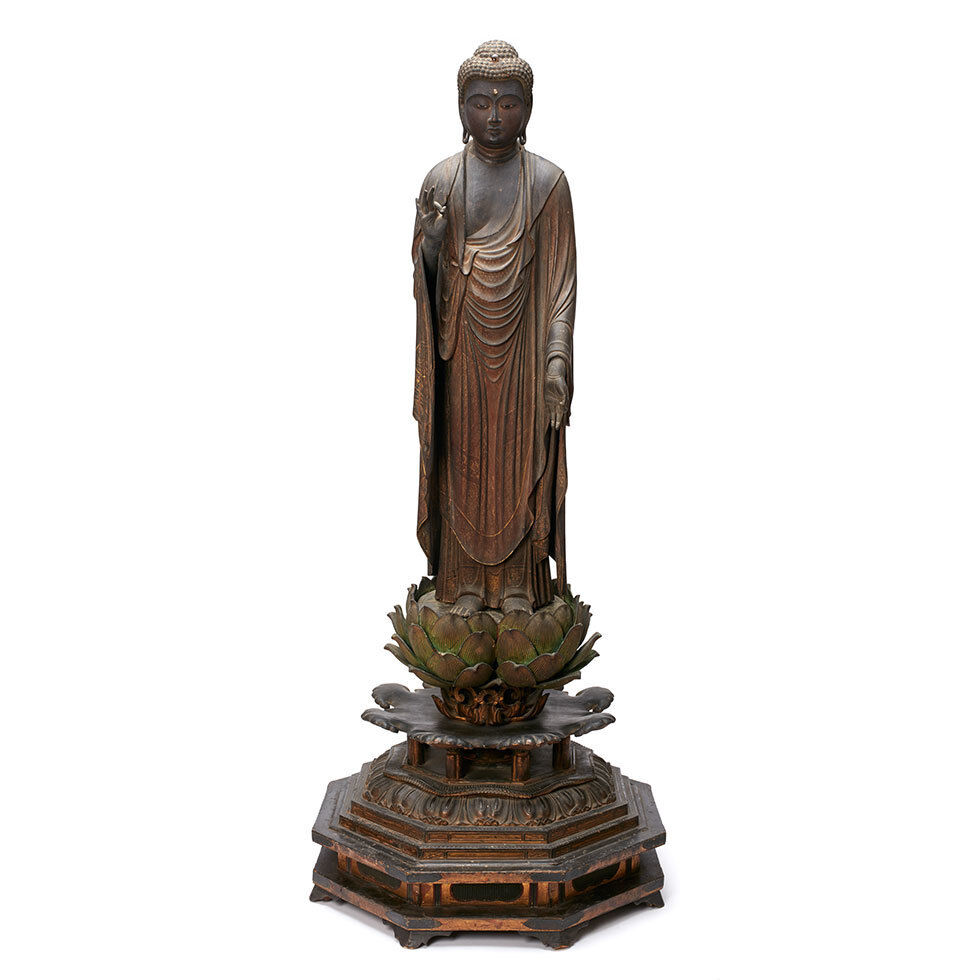 Buddha Preaching, 8th–early 9th century, central of northeastern Thailand. Courtesy of The Metropolitan Museum of Art. Editor’s note: the hand on the right side of the image is performing the Varada gesture.

The varada mudra is known as the “gesture of dispensing favors.” The palm is open and empty, and the fingers may be slightly bent, as if holding a ball. In a standing figure, the arm extends slightly out, and in a sitting figure, the hand is at the breast, slightly to the side.
The gesture’s Japanese word, segan-in, emphasizes the historical Buddha’s original vow to strive for all beings’ salvation. The Sanskrit term vara, also known as varada, highlights the Buddha granting the vow. Despite this reference to Shakyamuni, this gesture is more commonly exhibited by bodhisattvas. Varada is also a frequent symbolic gesture for Avalokiteśhvara, the bodhisattva of compassion, whom Proser described as the most popular bodhisattva in the Mahayana tradition. 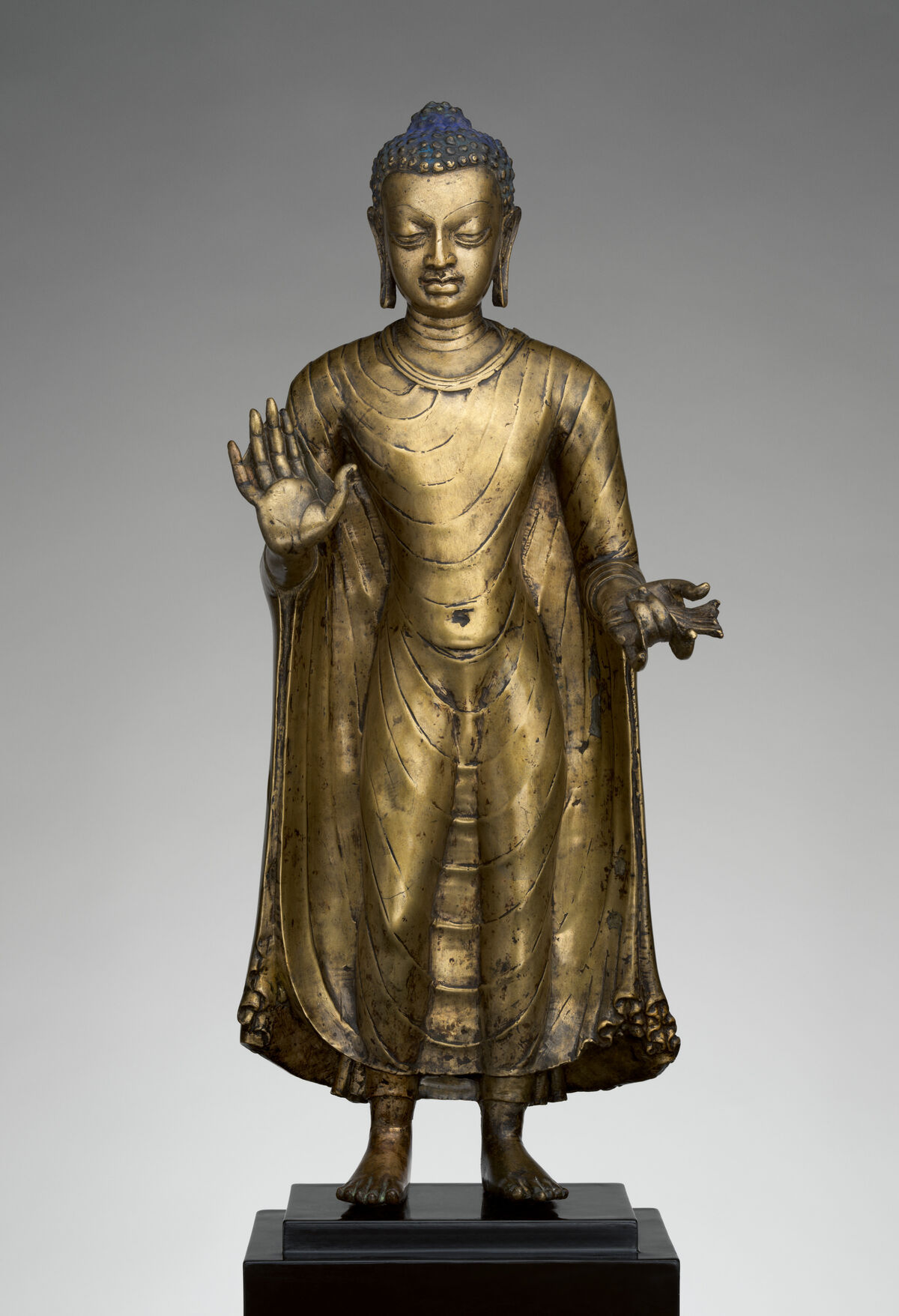 The raised palm that characterizes abhaya has no shortage of meanings across cultures. According to Saunders, this gesture is seen in depictions of the Roman emperor Severus, and was used to perform blessings in Jewish ritual. In Christian iconography, Christ performs the gesture to designate himself as the “all-powerful monarch,” ruler of the universe. In the U.S., colloquially, it means “stop.” In Buddhism, the gesture relates to a story about Devadatta, Shakyamuni’s cousin and disciple. Devadatta turns against him, setting an intoxicated elephant after his cousin. With a simple raise of his right hand, Shakyamuni brings the elephant to a halt.
Abhaya, as the gesture has come to be known, is the mudra of blessing or protection. Proser called it a “gesture of reassurance,” and in Saunders’s book, it is described as the “mudrā which grants the absence of fear.” It is done uniquely by the right hand, though over time, the hand in this gesture has gradually moved down the body. In the earliest images from Gandhara (in what is now Pakistan), the hand is at shoulder level, whereas by the 5th century, the hand settled just above the hip.
Abhaya is often paired with the varada mudra. The two gestures have an aesthetic balance, but also share thematic similarities. Both offer a gift: Abhayamudra, the gift of reassurance; varada, the gift of charity. Lama (Teacher), Gyurme Dorje, 17th century
Rubin Museum of Art
Pakhoutova likens mudras to ancient punctuation. Like the diction in a sentence, the mudra is akin to an exclamation point or semicolon—it gives a particular mood to an image. Vitarka, which is inextricably linked to speech and still used colloquially in secular contexts—as an argumentative gesture in India, a signal of approval in the U.S., and as profanity in Brazil—exemplifies mudras’ emphatic function.
In this mudra, the thumb and forefinger, generally on the right hand, touch to form a circle. The left hand points down, facing out. If the figure is seated, the palm is up and resting in the lap. As a whole, the gesture evokes an impassioned professor accentuating a point mid-lecture.
The circle, much like the dharmachakra mudra, resembles the perfect and eternal Buddhist law. In Esoteric traditions, the right hand represents wisdom; the thumb, mediation; and the index finger, air. Together, the thumb and index finger suggest the efforts of Shakyamuni. In India, this gesture is performed most frequently by Buddhas. In Japan, it is seen in representations of Shakyamuni, and is also common to Amitabha Buddha, the cult figure of the Pure Land sect of Buddhism. 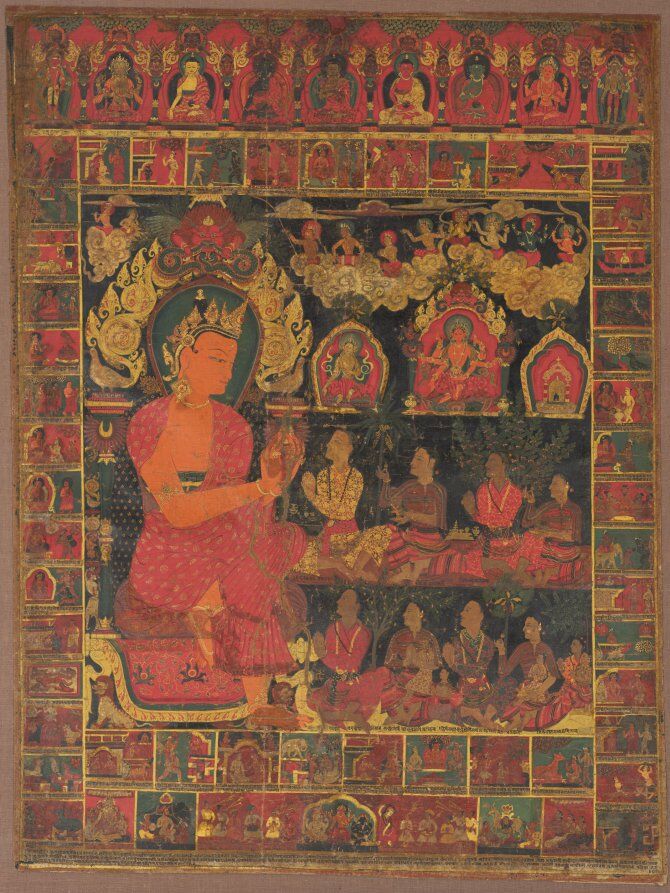 Thangka with Bejeweled Buddha Preaching, 1648, Nepal. Courtesy of The Cleveland Museum of Art, 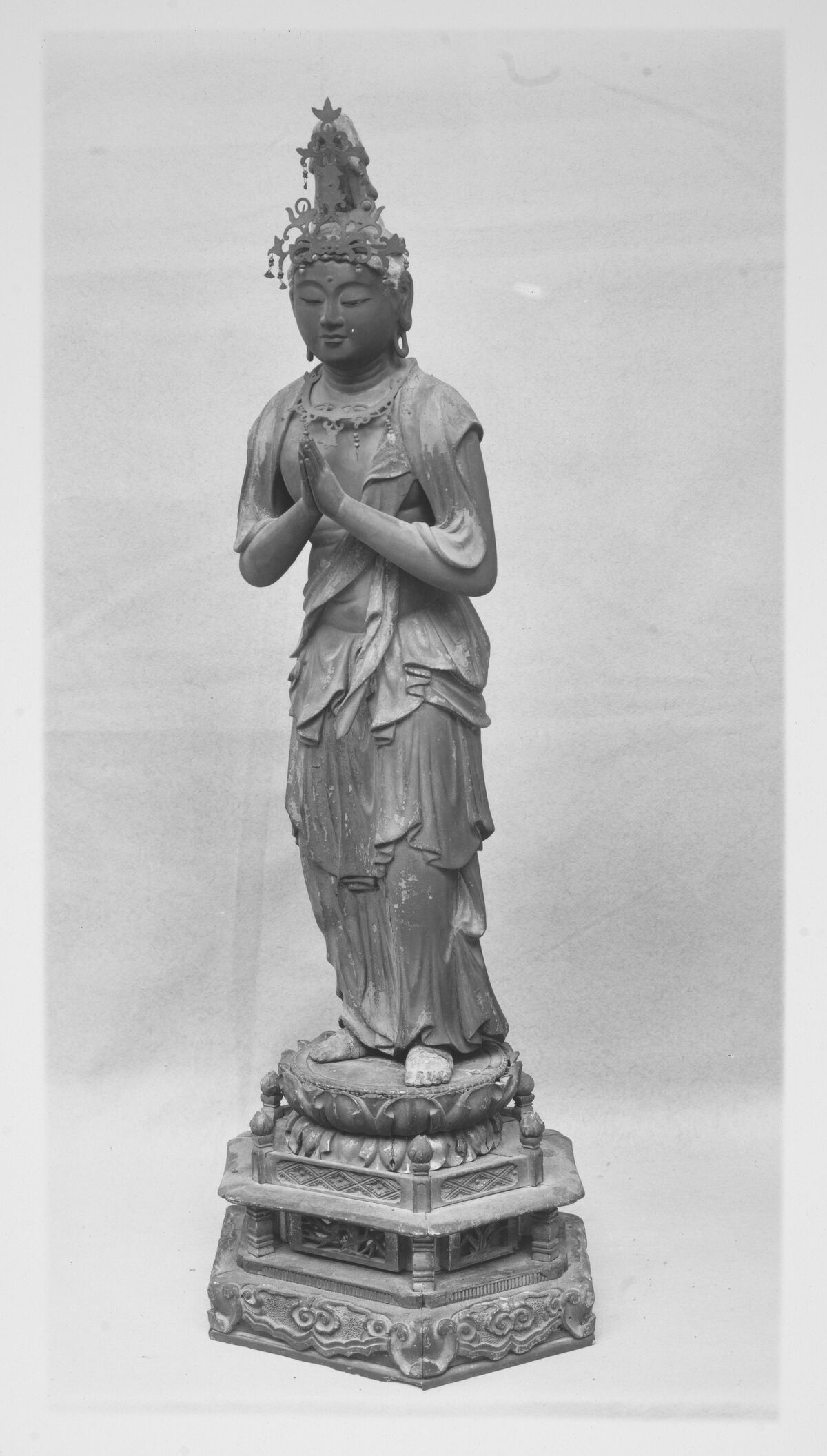 At first glance, the anjali mudra—in which the fingertips are interlocked and all the fingers of the right hand rest against the left—looks like a prayer symbol particularly common in Judeo-Christian contexts. In yoga, the gesture is often paired with the word namaste, which translates to “the light in me bows to the light in you.” In Buddhist imagery, it is more closely associated with greeting than prayer. It is also known as the “mudrā of adoration” and, in Saunders’s book, as the “diamond handclasp.”
As a salutation, this mudra is not done by Shakyamuni himself, but is seen used by bodhisattvas, holy men, and kings. In one 17th-century painting from Nepal, a bejeweled Buddha in the center of the composition preaches to several figures making the anjali mudra.
Saunders explains that in some readings, the hands coming together symbolizes the unification of the two essential aspects in life, “the spiritual and the material,” or the “static and the dynamic.” In a poetic symbolic gesture, the hands’ position under the mouth shows respect to words spoken.
Kelsey Ables
Related Stories

In Thailand, a Buddhist Artist Is Building the Bizarre Temple of His Dreams In Thailand, a Buddhist Artist Is Building the Bizarre Temple of His Dreams
Mitch Sawyer
Jul 7, 2017 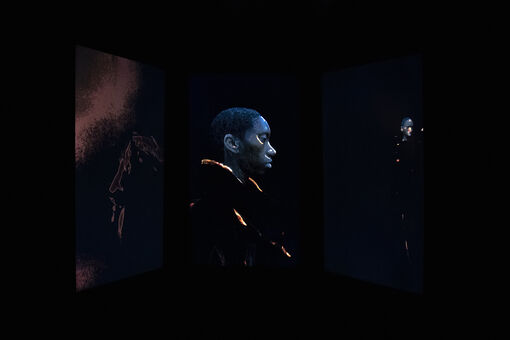 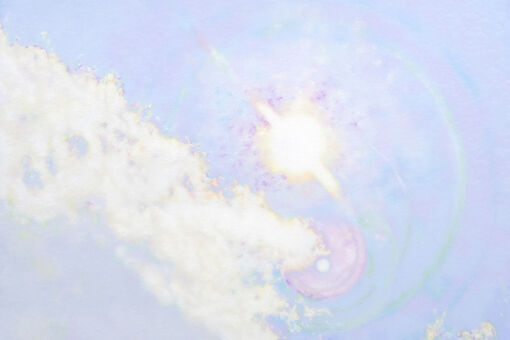