Artsy Editors
Jan 26, 2016 1:28pm
Conor Backman describes his trajectory into art as “a process of elimination,” but upon hearing him speak—the scrupulous way he chooses his words, and the clear, concept-driven ideology behind his art—it’s plain that with everything, he’s sincere and intentional. And his art is no different. 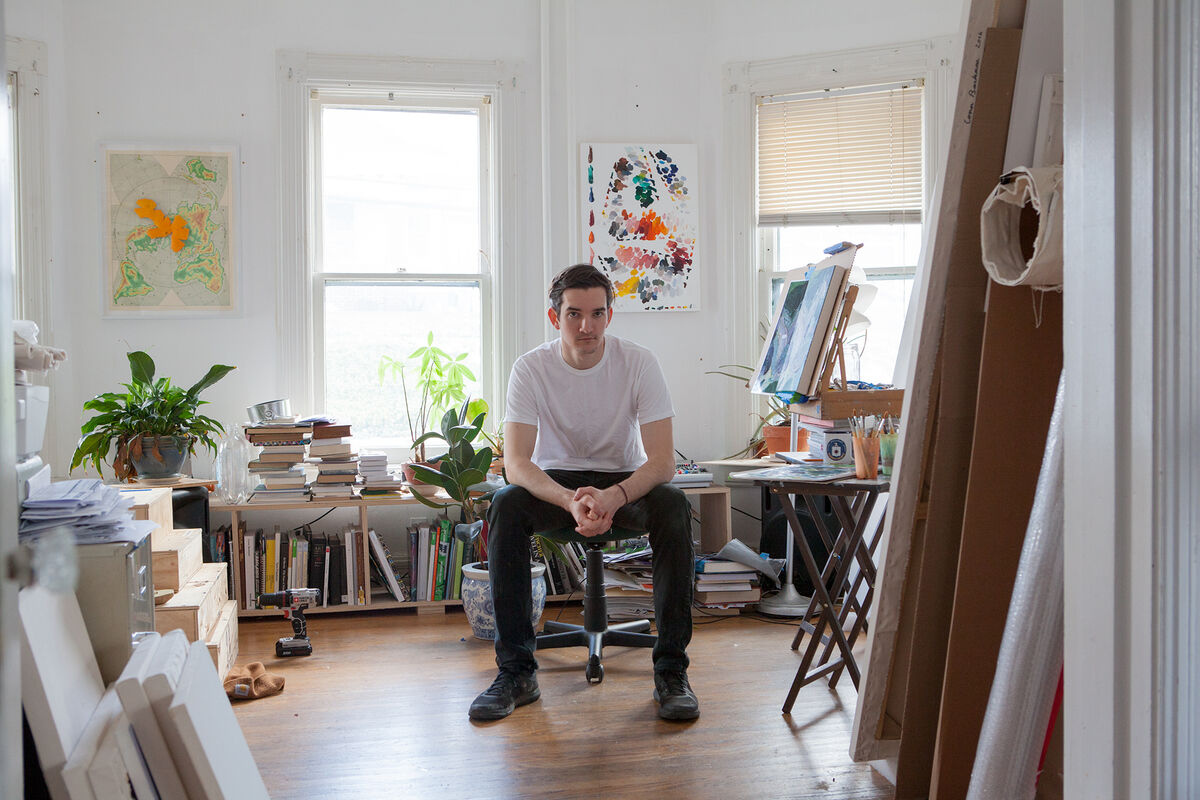 The young artist (b. 1988) is based in the thriving creative enclave of Hudson, New York, where he’s been living for the last two years, relishing in the landscapes that have been canonized by the Hudson River School. His works evidence the romantic, meticulously rendered natural world of his 19th-century forebears, but also engage in contemporary concerns about color and materiality. While participating in historic conversations around painting and sculpture—experimenting with perception, space, iconography, and the readymade—he adds to his works a healthy dose of the present, which surfaces in the forms of cast-resin orange peels, cross-sections of paint cans, or panes of glass that mimic screens.

Backman hails from Virginia, where he earned BFAs in both painting and sculpture from Virginia Commonwealth University, and co-founded REFERENCE Art Gallery in Richmond with fellow artists—he considers the collaborative experience a major milestone of his career thus far. Since moving to New York, he has swiftly gained a reputation for his seamlessly executed paintings and sculptures, which garnered him solo shows at James Fuentes and Retrospective last summer and fall, respectively, and a slate of upcoming shows that will carry him to Los Angeles and back to Richmond. 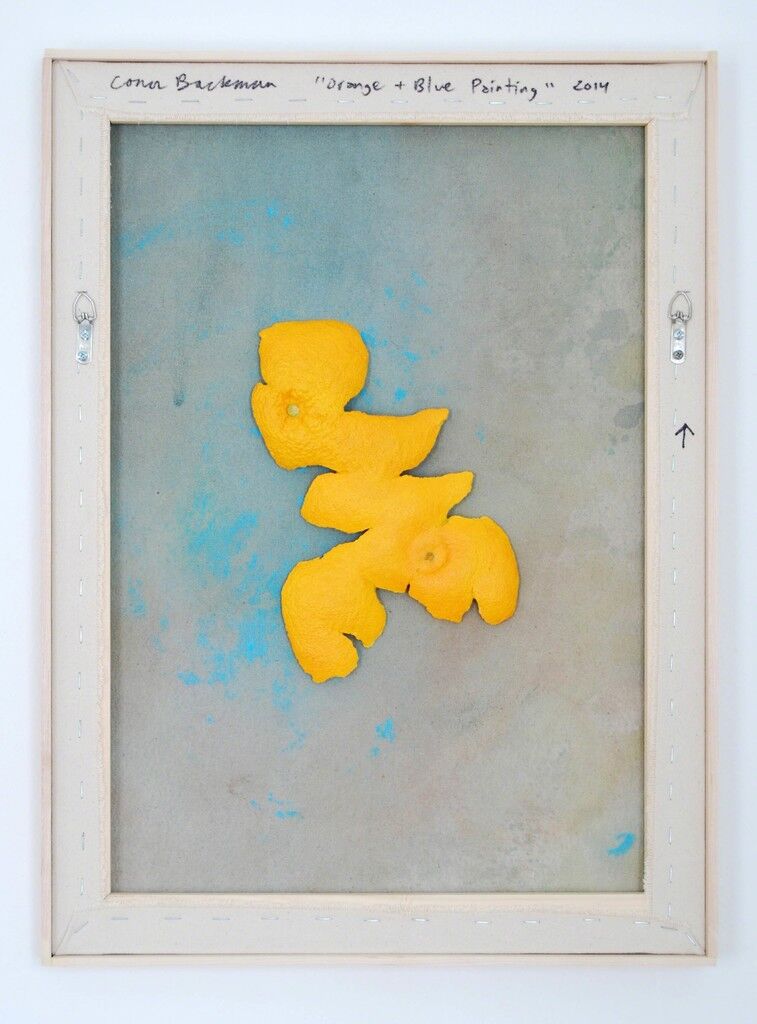 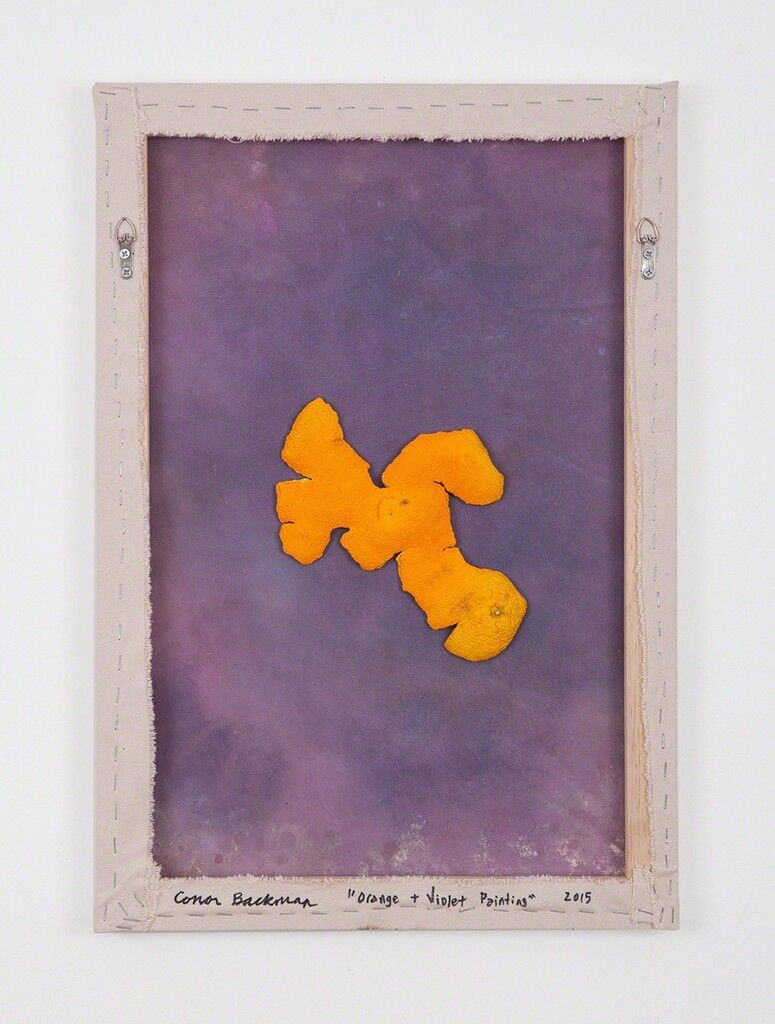 Conor Backman
Orange + Violet Painting, 2015
Evelyn Yard
Advertisement
We caught up with the artist ahead of his next endeavor, a showing with London gallery Evelyn Yard at Art Los Angeles Contemporary (ALAC), to learn about his process, life in the studio, and what we can expect from him next.

Casey Lesser: Can you tell us about the origins of the works on view at ALAC? How do they fit into your practice as a whole?

Conor Backman: I’m presenting pieces from two recent bodies of work that engage with multiple ideas of self-referential flatness in painting. Each set of works combines elements of
trompe l’oeil
with a type of monochrome. The works have evolved out of an interest in exploring territory between materiality and image.

In the first group of works, I’ve attached painted casts of flattened orange peels to simulations of canvas versos through which pigment has seeped. These pieces evolved from a series of paintings of orange trees framed behind black glass. The glass made reference to computer screens and greenhouses, both sites of manufactured availability, as well as the Renaissance idea of painting as a window. I was interested in pairing this old idea of illusionistic space with a contemporary idea of a world made flat through access to information.

The orange’s use in art history as a symbol of affluence makes it a useful metaphor for painting as a trade. I’m also interested in the action of peeling an orange in relation to mapmaking, which is analogous to the task of the representational painter in depicting the three dimensional world on a flat plane. In the paintings on view at ALAC, the orange peels become an additional monochrome within the work, functioning as both noun and adjective and providing the title for the piece.

The second group of paintings incorporate modified paint cans filled with simulated “paint” into
photorealistic
seascapes rendered in oil. The paint cans sit vertically in the composition, functioning as both windows and mirrors. They present a painting surface that is always new with a representation of suspended ocean surf. 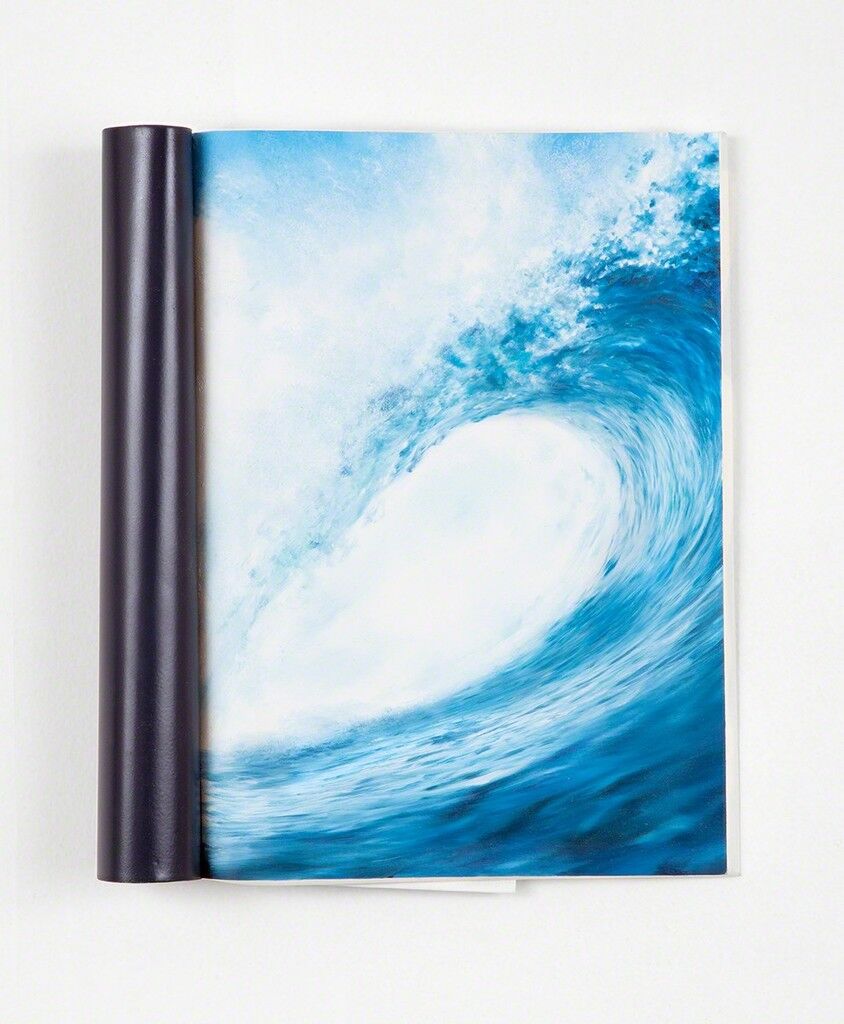 Conor Backman
The Thought of The Thoughtless, 2015
Evelyn Yard 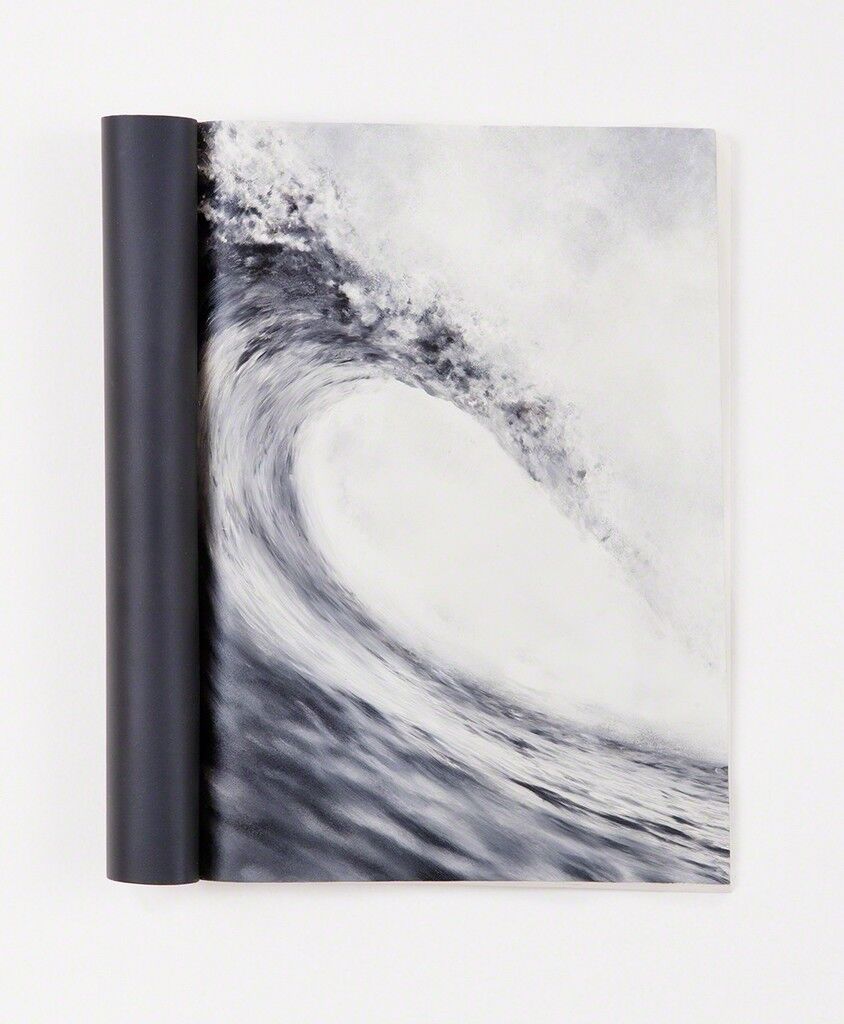 Conor Backman
The Thought of The Thoughtless, 2015
Evelyn Yard
CL: What is a day in the studio like for you? How did you settle in Hudson?

CB: Much of the recent painting I’ve been making involves hours of production, so I try to change the speed of what I’m working on throughout a given week. I keep multiple projects going simultaneously and might work on casting something one day and doing metalwork, building panels, or finishing an object on another. In between these projects I try to read, as many of the ideas for my work come from various texts I’m looking at or listening to. There’s also a lot of music being played and playlists being created throughout the day.
I came to Hudson through two good friends who were in the area attending Bard College. I’d been in New York City for two years and had never considered the area before visiting them. Living upstate has afforded me more time and focus in the studio, while still being close enough to make day trips to the City. 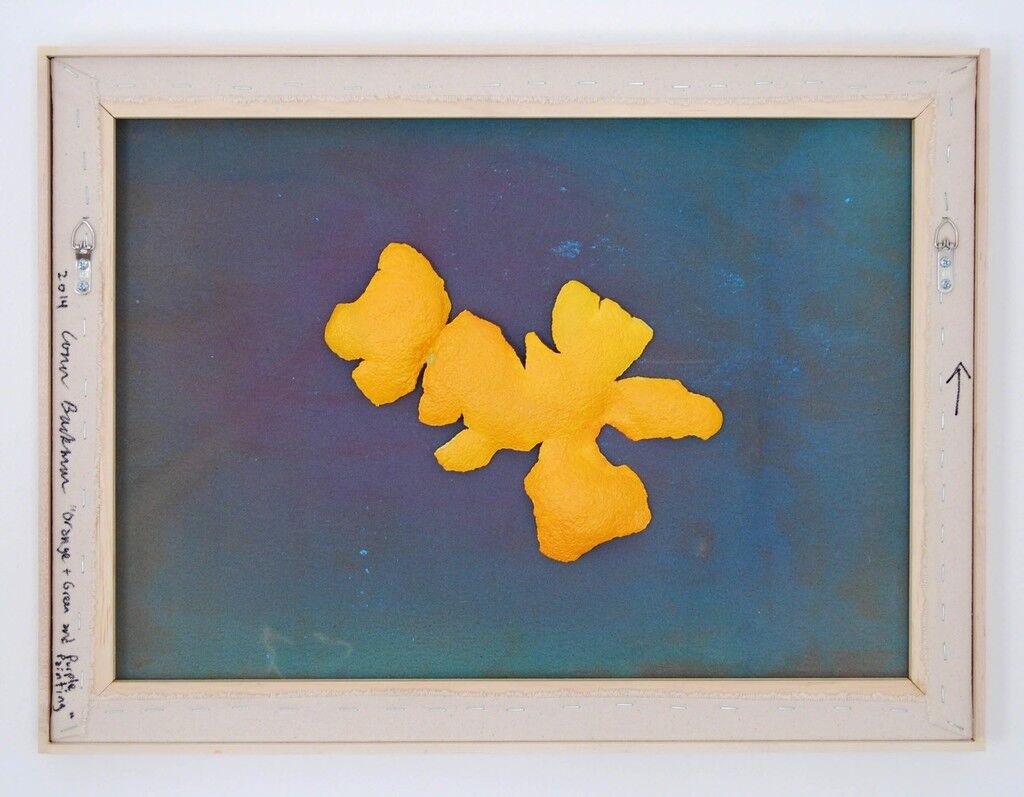 Conor Backman
Orange + Green and Purple Painting, 2014
Evelyn Yard
CL: What have you been reading and listening to lately?

A few favorite podcasts lately have been Freakonomics, Marketplace, and StarTalk. Books I’ve read recently include Learning from Las Vegas and Complexity and Contradiction in Architecture by Robert Venturi, Lawrence Weschler’s biography on Robert Irwin, Please Understand Me by David Keirsey and Marilyn Bates,
Torbjørn Rødland
’s “Sasquatch Century” catalog, Martin Kippenberger’s Books 1977-1997, Gustave Caillebotte: The Painter’s Eye by Mary Morton and George Shackelford, The Claude Glass: Use and Meaning of the Black Mirror in Western Art by Arnaud Maillet, and Windows on Nature by Stephen Quinn. 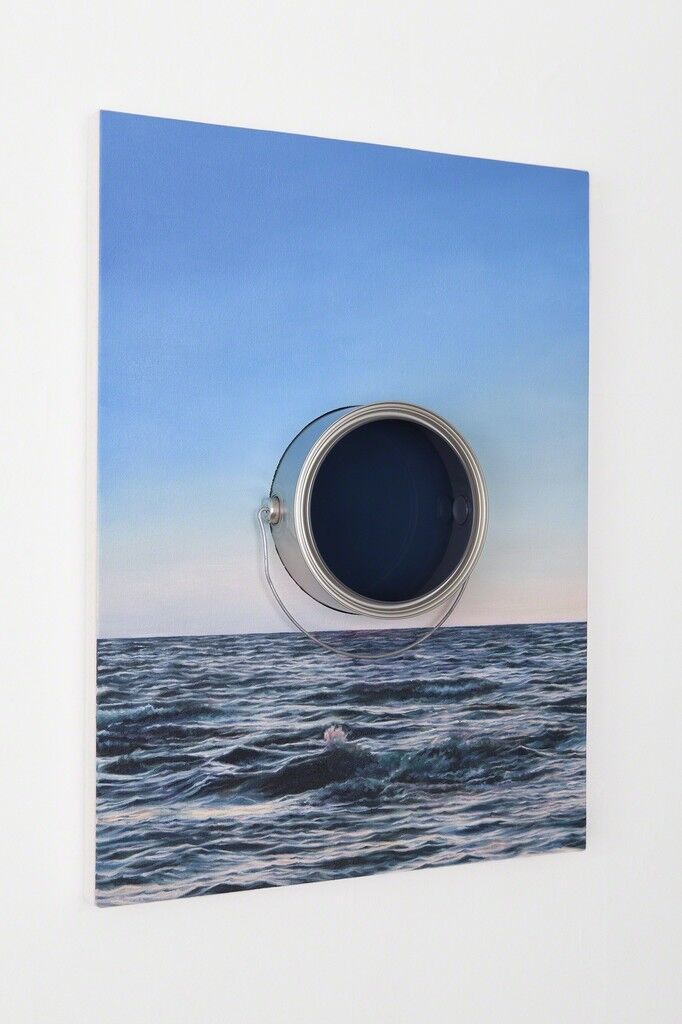 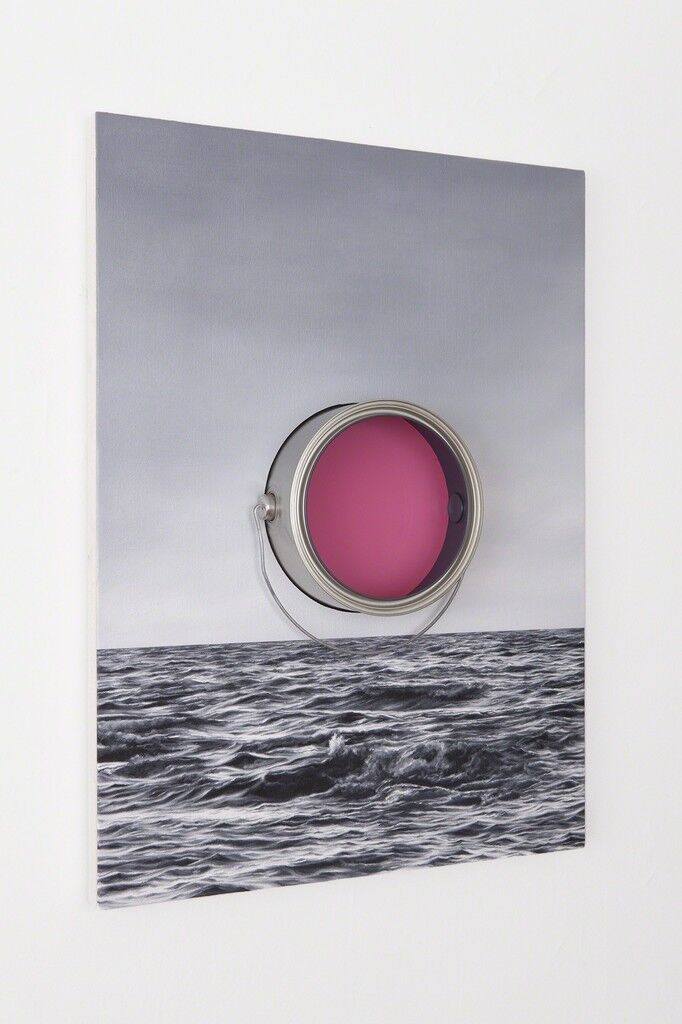 Conor Backman
A poem is always new because it lives in the ear , 2015
Evelyn Yard
CL: Where do you find inspiration? Which artists have been influential to your work?

CB: I’m currently living in the same town that was home to
Frederic Church
and
Thomas Cole
in the 19th century. I’m finding myself more interested in their work as I’m seeing a landscape that feels familiar to one depicted in their paintings. I’m also finding early
Impressionist
painting to be of interest and relevant to many of the conversations currently happening around perception, flatness, materiality, and image in contemporary painting and photography.
CL: What’s next for you?

CB: My next solo show opens at Smart Objects in LA on February 26th. I’ll be showing new work along with a couple pieces I began nine years ago and have periodically revisited since. The show will focus on landscape and figurative paintings that foreground the process of seeing as their unifying theme.
Visit Evelyn Yard at Art Los Angeles Contemporary 2016, Jan. 28–Feb. 1.
Related Stories