What It Costs Galleries to Go to Art Basel 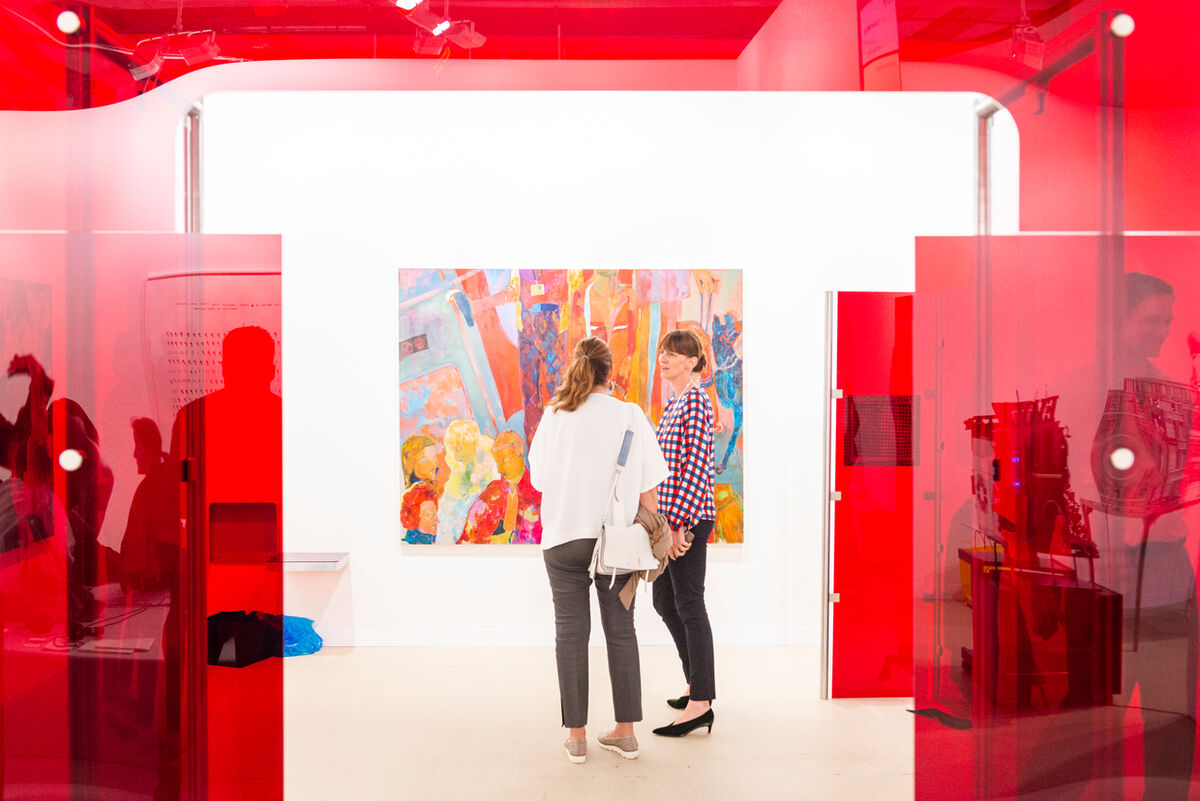 Installation view of work by Georgia Gardner Gray at Croy Nielsen’s booth in the Statements sector at Art Basel in Basel, 2018. Courtesy of Art Basel.

Basel, Switzerland, is not a cheap city, and the bill to attend Art Basel in Basel starts adding up quick. One dealer told me a last-minute suite at the Grand Hotel Trois Rois, which is usually an already-costly 1,815 CHF ($1,820) per night, was quoted to him with the art fair upsell of 7,000 CHF ($7,022) a night, or 49,000 CHF ($49,160) for the week. Go downstairs to the bar, and two drinks will be over 80 CHF ($80) with tip. A price quote for an Uber during the rush to leave the fair’s first day: 50 CHF ($50) for a five-minute trip. Gallery dinners are hours-long affairs that stretch until past midnight, taking over entire floors of grand restaurants. Lévy Gorvy has a dinner that’s circus-themed, and gallery co-owner Dominique Lévy has said that it contributes to a total fee for the week that exceeds $300,000.
Dealers can be hesitant to talk about exorbitant costs of attending a fair such as Art Basel, but the few that agreed to divulge information offered insight into how the high costs to attend the fair can be problematic, even for large galleries with multiple locations. A poll of representatives at different sized galleries exhibiting at Art Basel in Basel in 2018—two small galleries, three mid-sized galleries, and three large galleries—revealed that total costs for a small gallery in the Statements sector are $50,000; medium-sized galleries with modest booths on the second floor pay $150,000; and the the large galleries on the bottom floor can have totals that soar above $400,000 for a fair that is open for just six days. These costs include booth fees, travel, lodging in town, shipping costs for the works, gallery dinners during the fair, and other expenses accrued during the week.
The elemental cost is the booth fee to appear at the fair itself. For Art Basel’s Galleries and Feature sectors, the fee is priced at 830 CHF (around $832) per square meter, and according to one dealer knowledgeable of booth sizes, a medium-sized booth is around 70 meters—that’s 58,100 CHF ($58,255) already. The larger booths could be as much as 100 square meters, which comes to 83,000 CHF ($83,220). The walls on the outside of the booths require another 500 CHF ($502) per square meter if the gallery hangs work on them, and there is a 550 CHF ($552) application fee for those in the Galleries sector. For a “privileged booth location” by the entrance or along the side walls, add another 5 percent on top of the total booth cost. Hanging something heavy means paying to reinforce the walls, and certain works, depending on how valuable they are, require hiring a security guard for the duration of the show. Some galleries produce catalogs for the booth as if it were a bellwether evening sale at Christie’s. A fully loaded mega-gallery-sized booth could easily exceed $100,000.
A booth in the Statements sector of Art Basel—which focuses on young galleries showcasing the work of a single artist—is 400 CHF ($402) per square foot, and often as small as 30 square meters. At that size, it’s a much more affordable option for younger galleries, at just 12,000 CHF ($12,108). One dealer who co-owns a gallery that showed this year in Statements said the fee contributed to a total cost of $50,000 when tallying plane tickets, hotel rooms, and expenses, but that one purchase at the fair made up for it, and then some. The cost of shipping—one of the biggest expenditures, the representatives for large galleries said—is not a big issue for small galleries showing a solo booth, as they have to bring only a few works by a single artist. 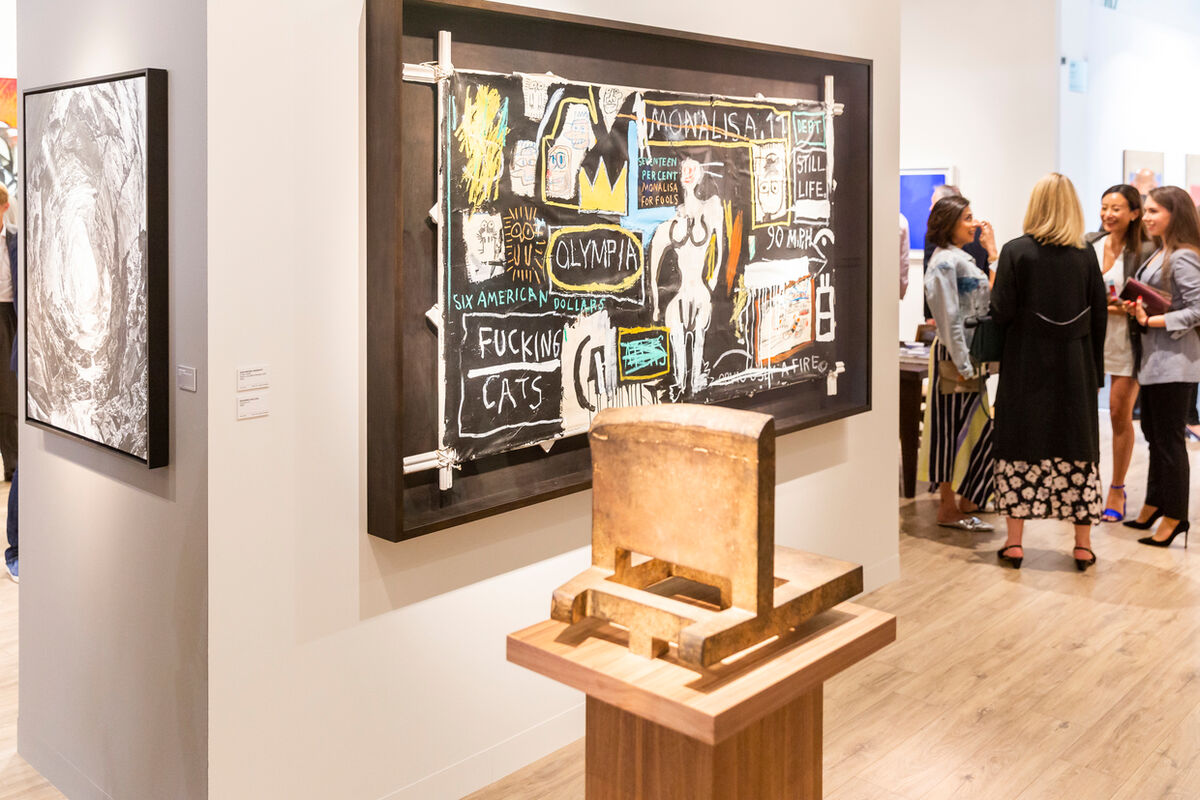 Installation view of Lévy Gorvy’s booth in the Galleries sector at Art Basel in Basel, 2018. Courtesy of Art Basel.

The high cost of shipping caused some galleries to look for other ways to keep costs down. For instance, one outfit with a medium-sized booth on the ground floor said they decided not to do a dinner this year since last year’s did not generate enough sales to justify the expense, which came to $40,000. But still, when incorporating the cost of shipping 40 to 50 works—this booth had a complete re-hang after selling out the booth over the course of the first two days—and flying over five employees on top of paying the booth cost, the total amounted to somewhere between $250,000 and $350,000.
Another dealer said her gallery spends around $320,000 to come each year, a total that was pumped up by the cost of participating in Unlimited and Parcours, two other sectors of the fair. But another large gallery with artists at Unlimited—and which threw a dinner party on Monday at a popular Basel restaurant—was able to keep costs down to the relatively slim $150,000 to $200,000 by hosting a cocktail party with trays of hors d’oeuvres, rather than a multi-course sit-down affair.
One international gallery said the cost was $400,000, and despite making enough sales in the opening hours to make that back doubly, the budget had to be followed precisely—staff were told to avoid surprise expenses, such as taxis in town or impromptu drink with clients. The dealer at this international gallery said that only the biggest few galleries—the many-branched art market behemoths, the cruise ships that are unaffected by the wake that can sink smaller galleries in one wave—can spend $400,000 on a fair without a sweat.
Over a dozen galleries approached at the fair and contacted by email declined to respond, citing the need for privacy. The eight who responded generally did so because they were already in the black, which is not always the case for galleries who gamble on a fair. José Freire, the owner of New York’s Team Gallery, decided to give up the circuit after this year’s edition of Art Basel in Hong Kong, citing diminishing returns at various fairs. For instance, in 2016, he sold $35,000 worth of art during Art Basel in Miami Beach, and spent $200,000 during the five-day fair. The cost of attending multiple fairs is one of the most-cited reasons for a gallery’s closure.
And yet, the exposure that a world-class fair can bring is sometimes just worth betting on. Many dealers who decided against discussing the cost said that, for a world-class expo such as Art Basel in Switzerland, the returns far exceed the costs, even if they are high. At other fairs, even if the costs are lower, the amount sold can be significantly lower than at an Art Basel-level fair. The collector class at the Swiss fair, and their commitment to buying, is on another level, most dealers agreed.
For instance, the dealer who said he cut the $40,000 dinner to keep the costs within the range that he stated, which was $250,000 to $350,000, said that at last year’s Art Basel in Basel, a collector he had never met happened to come into the booth. They struck up a rapport, and while the collector didn’t buy anything that week, the two stayed in touch. Six months later, they struck a deal for a $5 million sale. The amount spent on Basel was suddenly just a fraction of a single sale.
Nate Freeman

Correction: An earlier version inaccurately reported the square meter size for booths in the Statements sector of Art Basel. Booths in that sector were 30 square meters during the 2018 edition of the fair, not 50 square meters; and at a price of 400 CHF per square meter, the cost of a booth in Statements was 12,000 CHF.