What It Costs to Have a Gallery in New York City

Artsy Editors
Mar 1, 2017 12:10pm
The art world has long had a complicated relationship with the real estate market: Galleries and artists tend to move where rent is cheap, but with their very presence drive up rents in the neighborhood. And while galleries have a say in many of their costs—from how many people to hire to how many fairs to attend—rents can evolve along a market trajectory dictated by factors far beyond a gallery’s control. Real estate pricing, especially in an international hub like New York City, is driven by dynamics in retail and critical local industries as well as trends in the global economy.
How real estate prices evolve impacts how and where galleries in New York City will operate; in particular, it sets the bar for how much a gallery will have to sell to stay solvent. To get a better picture of what it costs galleries to set up shop in key New York neighborhoods, we spoke to several real estate agents with expertise in serving galleries about the market in Chelsea and the Lower East Side, and in Brooklyn’s Williamsburg and Bushwick.

Before the 2008 financial crash, rents in Chelsea averaged around $90–$100 per square foot for a ground-floor location, according to Susan B. Anthony, a realtor with over two decades of experience facilitating art-world real estate deals. Today, average rent for ground-floor space in Chelsea is around $120 per square foot, out of reach for all but the most monied of galleries, because of the total cost of what are generally large, 1,500–5,000-square-foot spaces.
Some higher-end galleries, like David Zwirner and Gagosian, own their spaces, and are thus relatively immune to the cost of shifting rents. But for other galleries looking for a home in Chelsea, “It’s very hard to find space that people can afford,” Anthony says. 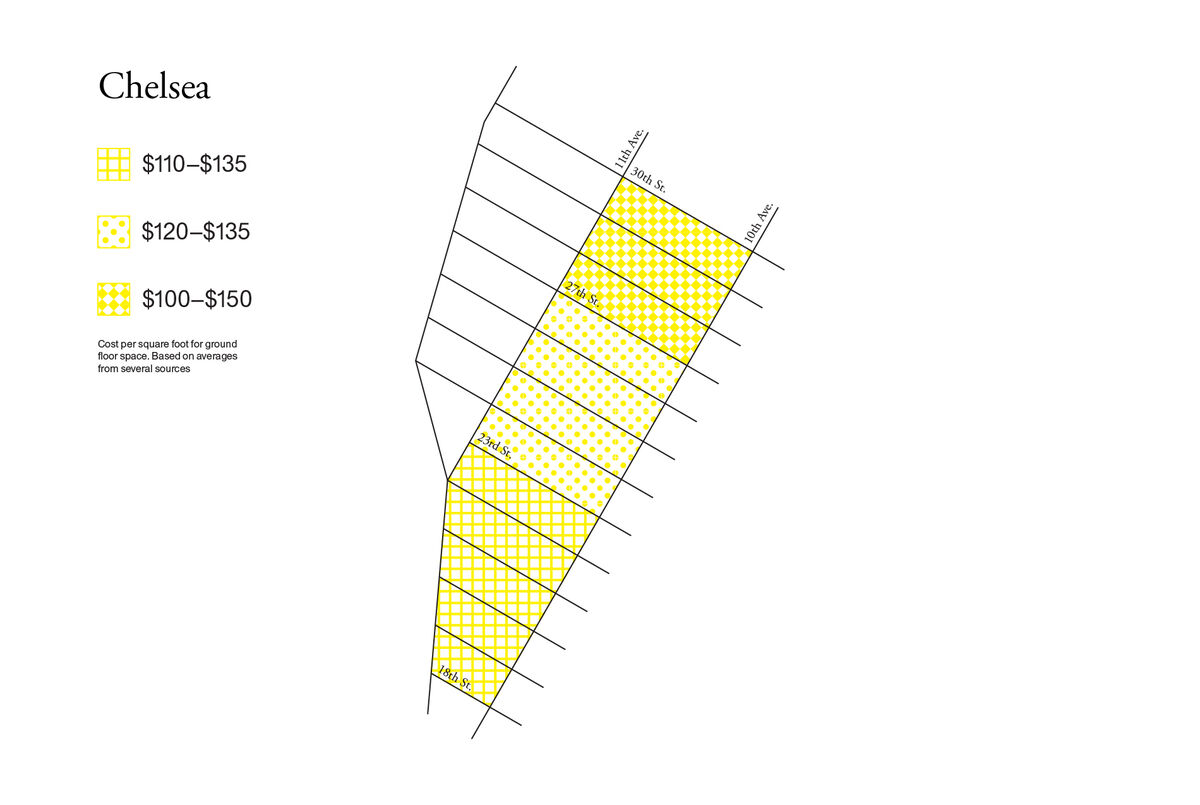 Landlords have been hoping that retailers—the kind of boutiques and flagships one finds in SoHo—with deeper pockets will fill the void. But there is no indication that this is happening. Even as the High Line draws millions of people per year to Chelsea, the raised park has failed to generate the kind of foot traffic that retailers need to sustain their businesses.
“The trouble is that the High Line is 30 feet off the ground,” says Earl Bateman, a commercial broker with Focus Real Estate, Keller Williams NYC.
Without the foot traffic in Chelsea that would entice retailers, galleries can “drive the market,” Bateman adds. “If they’re not willing to pay it, spaces will sit empty.” The dynamic has prevented the astronomical increase of prices in recent years.
“It’s hovering, but it’s more of a tenant’s market,” says Jonathan Travis, a partner at Redwood Property Group. Like all markets, there are price variations block by block, even property by property. Costs depend on numerous factors including the bones of the building, the delivery condition, and whether the landlord has high mortgage payments. Some spaces can still be found for below $100 per square foot.
Going forward, the major question mark for Chelsea real estate is how the Hudson Yards development—which stretches from 30th Street to 34th Street and from the Hudson River to 10th Avenue—will impact rents. The project will create tens of thousands of square feet of office, residential, and retail space just north of the arts neighborhood over the coming eight years.
But Bateman is skeptical that the well-heeled residents of Hudson Yards will turn Chelsea into a destination like SoHo, which is centrally located in lower Manhattan and connected to the rest of the city by public transportation. “It wasn’t residential that drove SoHo’s prices up,” he says. “It was being surrounded by subways.”
Still, Anthony says that in the long run she expects rents to keep rising (not surprising to anyone who’s been living in New York in the past few decades). “Unless the world falls apart,” she says.

Looking to the Lower East Side

Rising rents and the razing of existing buildings for new residential construction have caused Chelsea to lose a net half-dozen galleries per year between 2011 and 2015, according to Bateman’s calculations,  including CRG Gallery and Andrew Edlin Gallery. Many have relocated to the Lower East Side, even ones who could afford to stay in Chelsea.
“Going downtown felt right on a number of levels,” says Michael Gillespie of Foxy Production, which moved from a ground-floor Chelsea space to Chinatown in 2016. While the gallery could have remained in Chelsea, his team opted to move to a second-floor space in what they saw as a more dynamic neighborhood.
For them and others, the Lower East Side’s mix of character, proximity to younger galleries, and often cheaper rent is appealing. (Even before price hikes in Chelsea, galleries had made it their home.)
Compared to the big white boxes of Chelsea, the majority of locations across the Lower East Side are smaller and run by independent landlords who may only own a few properties. Galleries can still find larger spaces on the Lower East Side, mostly on the Bowery. But there, rents can start at roughly $110 and creep up to roughly $200 per square foot or above, north of Delancey. And unlike in Chelsea, landlords are able to find tenants—hotels, restaurants—willing to pay the higher-end sums to open up shop along the highly trafficked corridor. 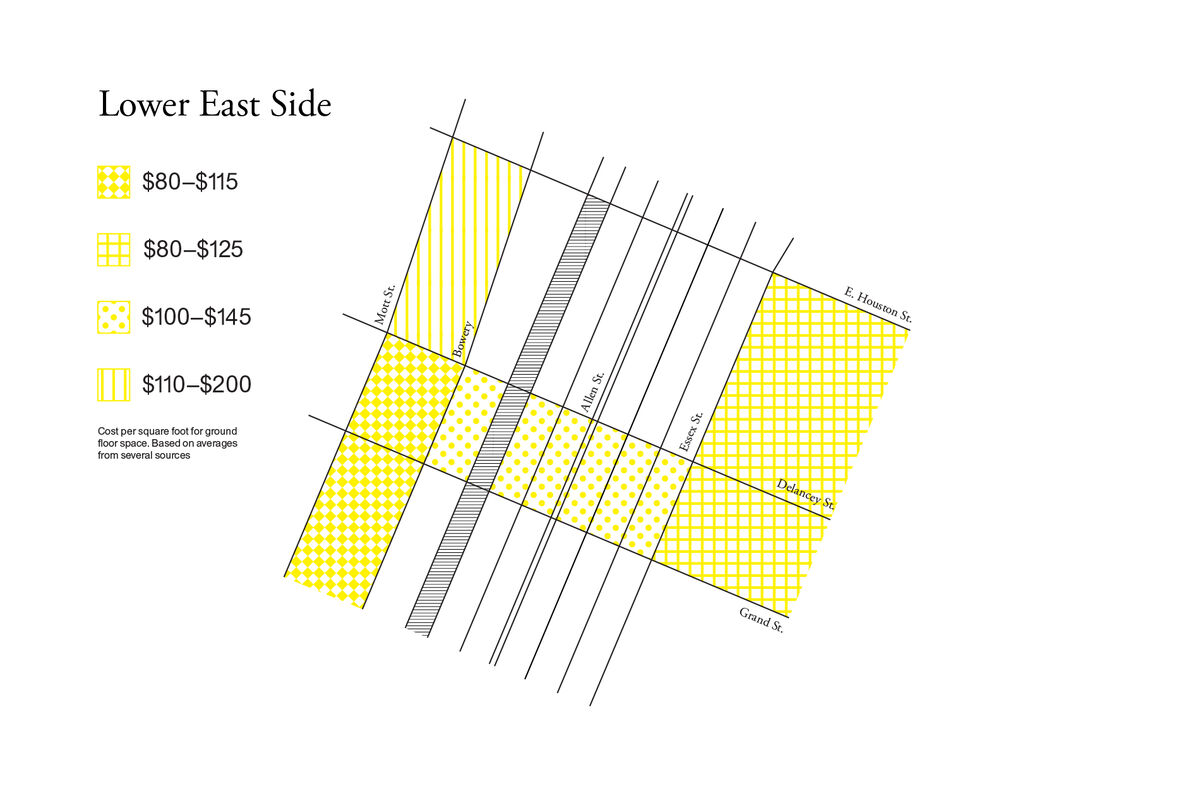 Advertisement
TriBeCa is another attractive alternative to Chelsea, thanks to its many former factory buildings with high ceilings and expansive, loft-like spaces. After being told of the impending demolition of its Chelsea building (one that hasn’t actually occurred), Alexander and Bonin relocated to 47 Walker Street in 2016. The gallery’s new location is 3,000 square feet larger than its Chelsea space, Bonin says, and offers a better value along with much higher ceilings and a skylight.
By contrast, rent for Lower East Side spaces can rise to be equal to or even higher than prices in Chelsea on a per-square-foot basis. In the area around Grand and Allen, prices range from roughly $100–$145 per square foot, according to Bateman. But the figures only tell part of the story. As Travis notes, the average size for commercial spaces is roughly 500–1,500 square feet on the Lower East Side, meaning that a gallery’s costs overall are lower.

Like Chelsea, the Lower East Side is also facing development. Essex Crossing will see 1.9 million square feet of public, commercial, and residential space open in phases starting in 2018, at the corner of Essex and Delancey. The development is slated to finish construction in 2024.
“I can see the real estate monster annihilating all these businesses,” says James Fuentes, who has run his eponymous gallery from 55 Delancey Street on the Lower East Side since 2010, and was in Chinatown for three and a half years before that.
One need only look to Williamsburg to see the impact of rapid development. In 2011, five years before an Apple store opened in the neighborhood, a spate of headlines declared the end of the arts community there.
Fast-forward to today and a thriving retail scene, wealthier residents, and new developments have pushed commercial rents for ground-floor spaces to around $115–$125 per square foot, making it roughly comparable to what a gallery might pay in Manhattan. That’s driven galleries looking for cheaper digs farther east, to Bushwick, where rents are anywhere from half to one-fourth the price: $30–$60 per square foot.
Others are looking back across the river. “Galleries that were there in Brooklyn because it was cheaper have decided to go to the Lower East Side,” says Bateman. A prominent example is Pierogi, which moved to Manhattan after over two decades in Williamsburg. With costs between the two neighborhoods evening out, the Lower East Side’s proximity to those looking to buy art and the visibility it provides for a gallery’s artists become important factors.
Fuentes acknowledges that the kind of development that pushes gallery rents up brings benefits as well as costs. The people who may move into new luxury residential housing are also his potential customers. “The city is becoming a more and more expensive place to live because there is a higher concentration of wealth here,” Fuentes says. “But it is that demographic that basically sustains this community of galleries.”
—Isaac Kaplan
Related Stories