With Costumes and Camp, Genevieve Gaignard Is Telling New Stories about Race and Beauty 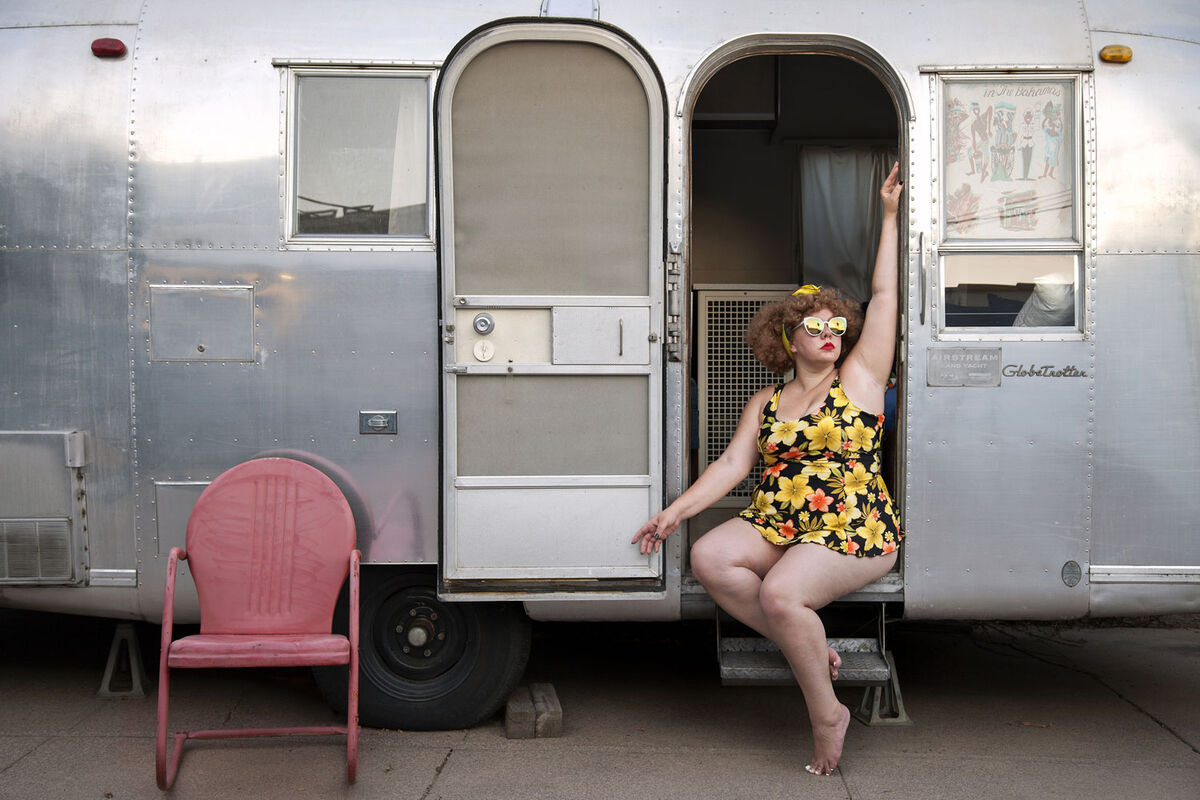 Genevieve Gaignard
turns our expectations about race and beauty upside down. She’s known for campy, costumed self-portraits in which she masquerades as a shape-shifting cast of characters: a leopard-print clad babe with a hairspray-stiff bouffant; a young woman decked with long braids, gold hoops, and a shirt emblazoned with the words “Hoodrat Thangs.” These personas are a way for Gaignard to explore her own identity as a mixed race woman (her mother is white and her father is black)—and her struggle to come to terms with “not fitting into just one category,” she says.
Since earning her MFA at Yale in 2014, Gaignard’s work has popped up in buzzy solo exhibitions at Shulamit Nazarian Gallery and the California African American Museum (CAAM), both in Los Angeles, where she lives and works. This fall, you can see her work at the Studio Museum in Harlem, the Houston Center for Photography, and the Prospect New Orleans triennial, where she’ll debut a new, site-specific installation.
All three venues showcase how Gaignard, in recent years, has expanded her photographic vision into immersive environments that further chip away at close-minded stereotypes and cultural norms. From afar, her domestic-style installations look cozy, like a grandmother’s overly decorated living room. But get closer, and unexpected, unnerving details emerge. 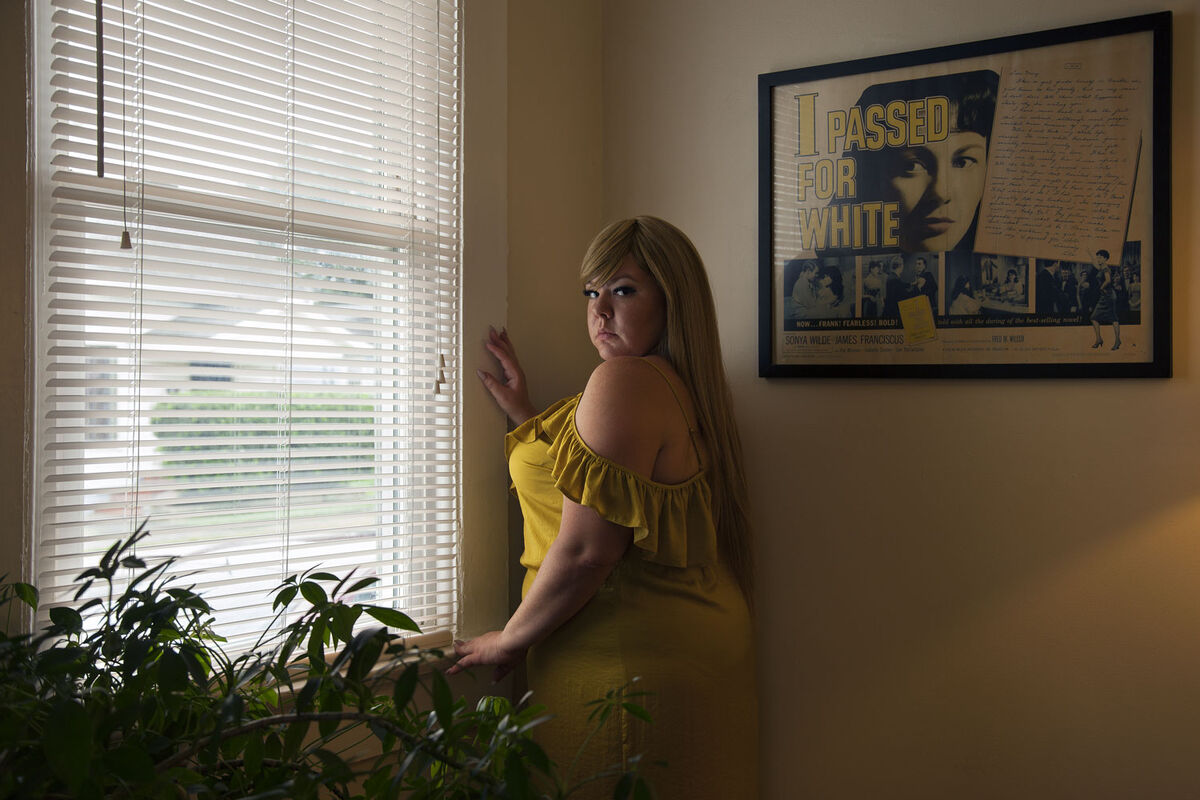 “The environments might feel inviting,” Gaignard tells me, as we walk through her latest installation, part of The Studio Museum in Harlem’s “Fictions” show. “They lure you in, but you learn something you weren’t anticipating—the heavier issues come through.”
For this piece, Gaignard has built a self-contained room, its two walls covered in busy floral wallpaper, outfitted with a baby-pink lounge chair, a skinny side table, a gold birdcage, and a sea-green grandfather clock. The pastiche resembles a timeworn parlor in the home of a pastel-obsessed trinket hoarder. But the room’s finer points tell a different—and decidedly more provocative—story.
Consider three figurines placed on the table and inside the birdcage and clock. They look like “the kind of tchotchkes grandma might have on a shelf,” Gaignard explains, with a mischievous smile. Except instead of statuettes depicting white southern debutantes or Disney princesses, the artist’s figurines are all black women, frozen in moments of escape, activism, and even revenge.
“I thought it was sad, that there’s no relatable figurine for a black woman. She’s always in the position of server or entertainer—not the belle of the ball,” Gaignard tells me, as we study one of the little sculptures. “I decided to change that.” 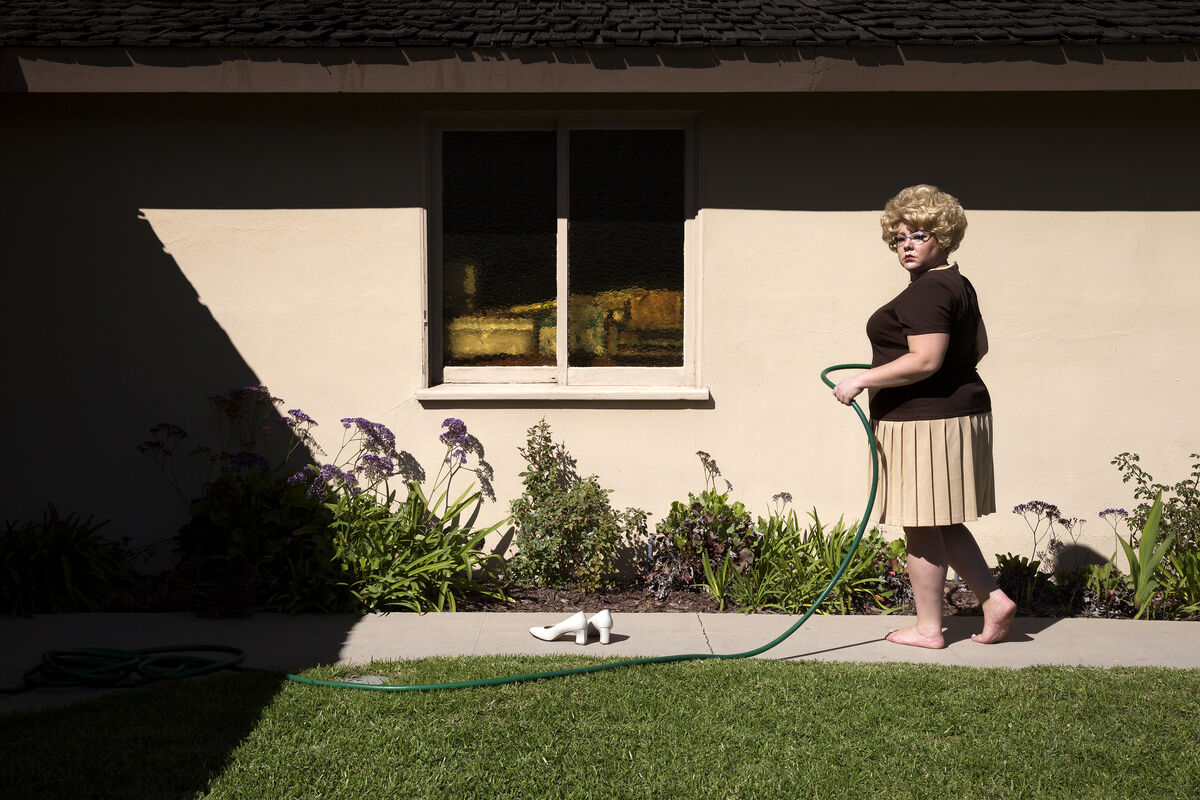 Advertisement
She did so by creating a new sculpture from two found figurines: one, a white woman in a poofy dress; the other, a black “mammy” character, a commercial testament to racism’s long legacy in the United States. Gaignard affixed the black figure’s head atop the white character’s elegantly attired body. Now, the statuette “has a moment to tell a different story,” the artist says.
Gaignard’s entire practice could be seen as her own quest to tell a different story—one that challenges the stereotypes that bolster prejudice of all stripes. She was raised in a small, primarily white town in Massachusetts with her mother, who filled their home with the trappings of black Americana and black history books, like biographies of Harriet Tubman. Growing up, her feelings about race, and her relationship with her identity, were complicated. “My work channels how I felt when I was younger,” she recalls, “those feelings I couldn’t quite verbalize, because I lived in a predominantly white neighborhood, without much diversity.”
Midway through a course at pastry school, Gaignard found a mentor who had studied at Rhode Island School of Design. He convinced her to leave the kitchen behind and pursue an art career.
She took an interest in photography and began capturing her family, the characters in her hometown, and eventually herself. This growing body of work would bring her to MassArt, then Yale. Gaignard also began making sculptures. In one, she covered a pair of cowboy boots with yellow air fresheners, titling the piece High Yellow Forest, an allusion to a derogatory term used to described the skin tone of mixed race women. In another, she topped a beauty pageant trophy with a tiny, 3-D printed sculpture of her own curvaceous body, ousting the slender, fashion-mag-approved figurine that was formerly there. 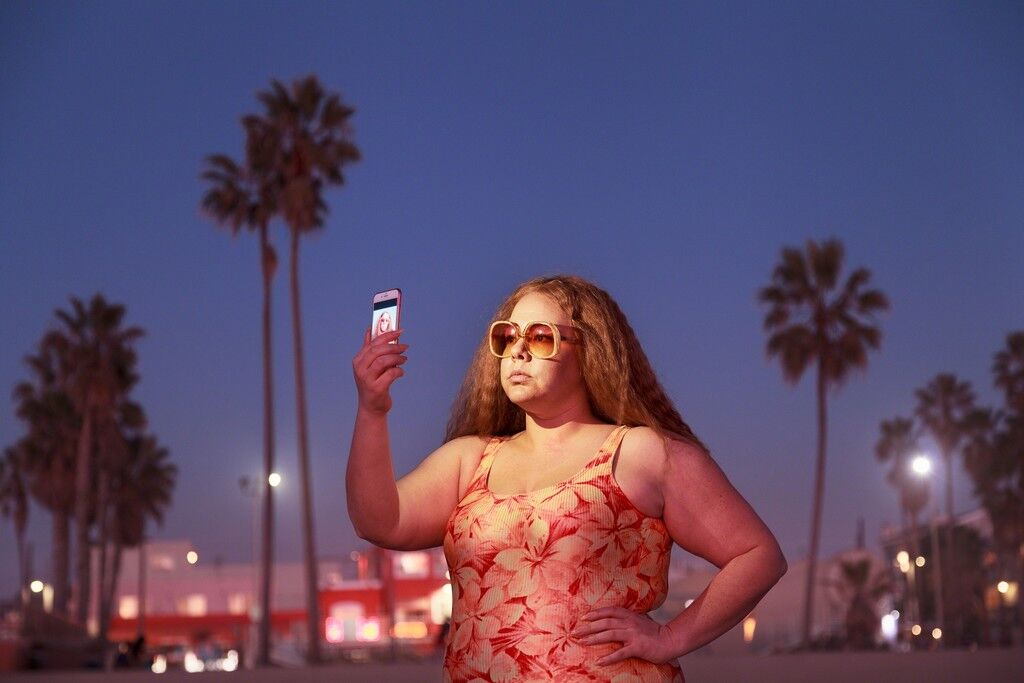 Genevieve Gaignard
Selfie, 2016
Shulamit Nazarian
Eventually, Gaignard herself—or, perhaps more accurately, different versions of the artist—became her most frequent subject. This array of photographic personas eventually led to entire environments; often, she’ll hang the self-portraits within the space, so that the viewer gets a partial glimpse into the life of whomever occupies it.
In “Fictions,” her domestic installation is hung with two new self-portraits. One shows Gaignard in Adidas sandals and a sweatshirt printed with an illustration of two figures who remind her of Salt-n-Pepa, under the all-caps word “QUEENS.” She stands in front of a massive wall covered haphazardly with half-finished paintings of powerful black men: Martin Luther King, King Tut, Malcolm X.
The second photograph shows Gaignard with straight blond hair and a ruffled yellow dress. Behind her, we can see a vintage poster for a 1960 film called I Passed for White. (“Yes,” she emphasizes, “that movie was really made.”)
Gaignard took the latter self-portrait in a house in the 7th Ward of New Orleans, where her father and much of his side of the family is from. Over the past year, as she prepares for her installation at Prospect New Orleans, she’s spent more and more time in the city, getting to know her extended family and hearing its lore. These stories will inform a new environment, with a number of mirrored elements for effect. And for the first time since she left art school, the images that decorate it will incorporate subjects other than herself. 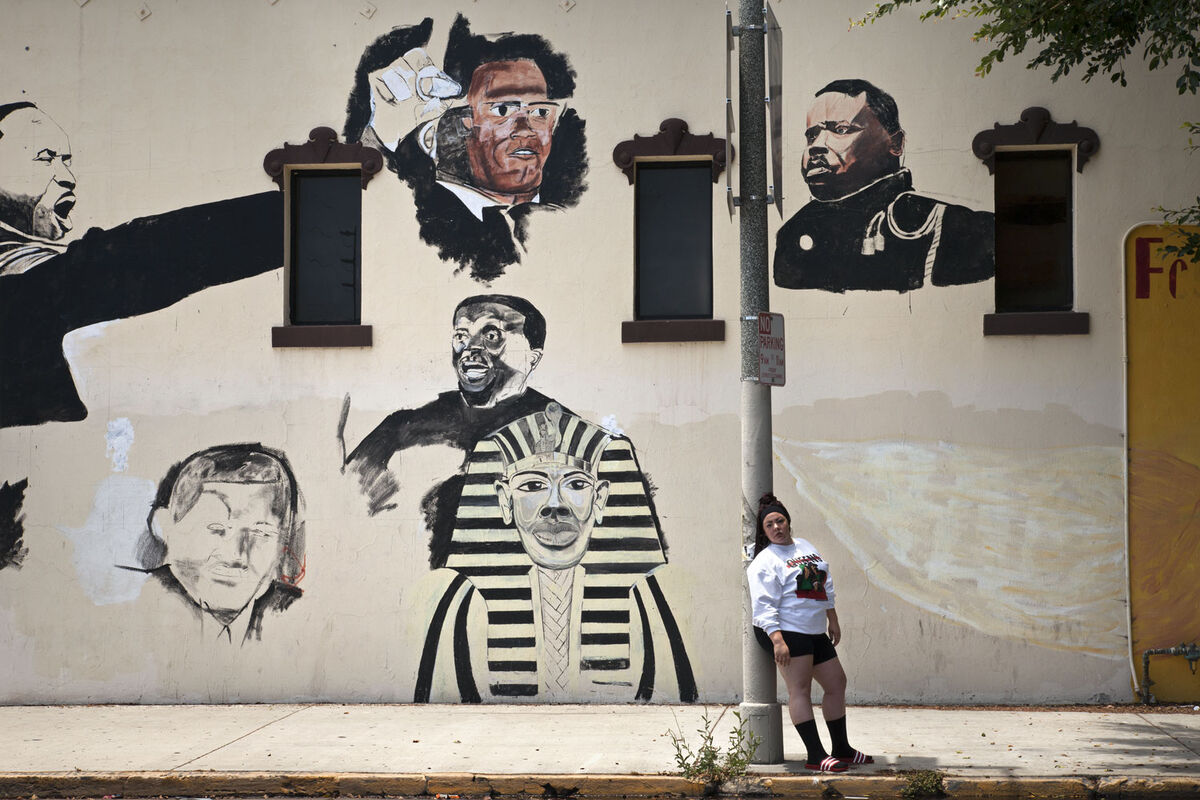 “There’s a tie-in to thinking about my grandparents and how they navigated through the world,” Gaignard says, explaining the project. “My grandmother was very fair-skinned, and although she’s African American, she could pass [as white]. So walking down the street, my grandfather might be asked: ‘Why are you walking with that woman?’”
The process of delving deeper into her family history has coincided with what Gaignard describes as a greater sense of clarity and confidence in “talking specifically about blackness and whiteness being in one body,” she explains. “Being in a white body and talking about blackness is something I’ve been hesitant to do, or a little shy about doing.”
She’s certainly gotten more comfortable tackling these issues as of late: Gaignard’s installation for “Fictions”—and what she hints at cooking up for Prospect—is anything but shy. With subtle but subversive details, the artist builds a fluid portrait of race, identity, and beauty that boldly resists categorization.
Alexxa Gotthardt
Related Stories