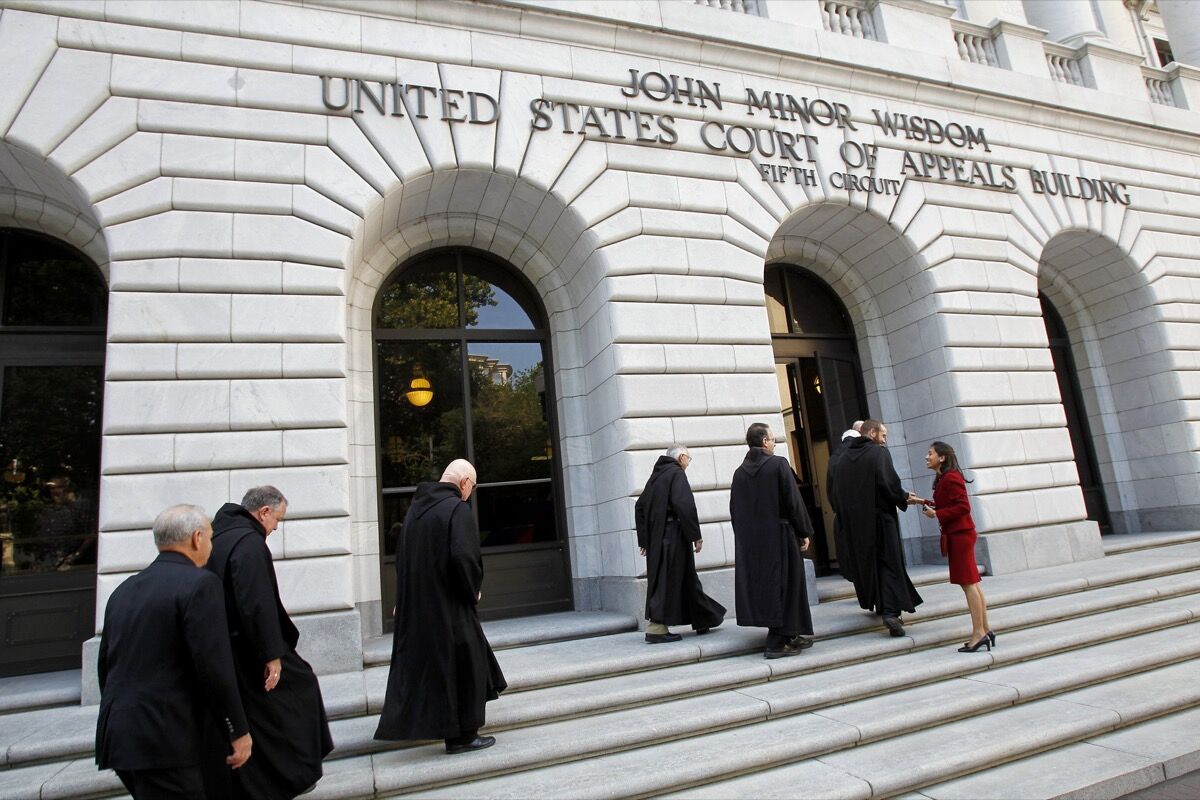 A lawsuit has offered a peek behind the normally closed doors that shield private art sales. The contentious six-year legal battle over a supposedly breached confidentiality agreement stemmed from the 2007 sale of a major
Mark Rothko
painting. The case pitted wealthy Texas widow Marguerite Hoffman against billionaire buyer David Martinez and L&M Arts, the now-defunct gallery that arranged the work’s $17.6 million purchase. Hoffman filed her suit in May 2010 after the work was re-sold for $31.4 million during a public auction at Sotheby’s, an act she claimed violated the original sale’s confidentiality agreement by disclosing that the 2007 sale had ever taken place. Some observers warned that if decided in Hoffman’s favor, the case could have meant that legal agreements ensuring a transaction’s secrecy could be used to effectively prohibit future sales of the art they governed.
With little fanfare, a federal appellate court in Texas weighed in on the case of the so-called “Red Rothko” two weeks ago, ruling that the confidentiality agreement governing the original sale did not apply to the existence of the sale itself and, moreover, that the parties involved never intended it to. The appeals court’s verdict is a major victory for Martinez and L&M, and one that all but puts the strange case to bed. And while the specifics of the “Red Rothko” lawsuit are singular, the saga provides a cautionary tale for those sellers and buyers wishing to craft binding legal contracts ensuring their art sales remain shrouded in secrecy.

Shortly after her husband’s death in 2006, Hoffman decided to sell Rothko’s Untitled (1961) in an effort to raise funds for his estate. Reportedly, in order to avoid public knowledge of the estate’s strained finances, the widow entered into a private sale agreement with L&M Arts—the now-shuttered gallery operated by dealers Dominique Lévy and Robert Mnuchin—rather than opt for what would have likely been higher returns at auction. As the intermediary working for an undisclosed buyer, L&M reportedly told Hoffman that the work would “disappear” into the European collection of a single purchaser. The sale was finalized in 2007 and included a confidentiality provision that stated “all parties agree to make maximum efforts to keep all aspects of this transaction confidential indefinitely. In addition, the buyer agrees not to hang or display the work for six months following receipt of the painting.”
The buyer of the work, a Belize-registered company named Studio Capital advised by Martinez, did not sign the same confidentiality agreement. Hoffman remained unaware of Rothko’s purchaser until 2010, when Studio Capital sold the piece at Sotheby’s, where it appeared as the cover lot. Though the catalogue and website omitted Hoffman’s name and the terms of the 2007 sale, it included information that, she said, made her identity easily ascertainable. Hoffman alleged that this, in turn, revealed the existence of the 2007 private sale, an act she contended violated the confidentiality agreement’s “maximum effort” to keep “all aspects” of the sale secret.
The original trial verdict was a mixed bag, but resulted in a win for Hoffman against L&M, finding the gallery owed her some $500,000 for breaching confidentiality (a paltry figure compared to the $22 million originally sought). Though the jury was also against Martinez, the trial judge set the decision aside, ruling that it was legally impossible to find Studio Capital liable since they did not actually sign the confidentiality agreement.

The appeals court agreed with the trial court’s ruling in favor of Martinez and Studio Capital but reversed the jury verdict against L&M. “The Fifth Circuit’s decision completely vindicates L&M Arts and persuasively concludes what L&M has maintained all along: that each and every one of Ms. Hoffman’s claims was entirely without merit,” said Tibor L. Nagy, the gallery’s lawyer.
Hoffman’s attorney, Roger Netzer, said that he and his client “respectfully disagree” with the ruling, adding that “even taken on its own erroneous terms, the decision was not a vindication of defunct art dealer L&M Arts,” which still must pay “$216,243 in disciplinary sanctions [...] because it improperly ‘with[e]ld discovery to which [Hoffman] was clearly entitled.’”
The main issue the appeals court determined was whether or not the confidentiality agreement covered the actual existence of the sale itself. The district court said yes. The appeals court said no. “I think they made the right decision,” noted Chris Michaels, founder and partner at The Michaels Law Firm LLC, who has written about the case previously. “They’re relying on some pretty basic concepts here,” he added.
That includes citing the dictionary definition of the word “aspect” as it is used in the original confidentiality provision, asserting that “references to an object’s ‘aspects’ generally describe features of the object rather than the object itself.” Moreover, the court found that allowing for the piece to be displayed six months after the transaction meant “the parties did not intend that maximum efforts be undertaken to keep the fact of the 2007 sale confidential indefinitely. A public (or even private) display would likely fall short of ‘maximum effort’ to keep changed ownership confidential.” The agreement’s final wording also differed from a prior iteration that included language explicitly referring to the sale as part of what should be kept confidential, a change the court read as further evidence that there was no intent to keep it secret.
Moreover, even if the provision had explicitly governed the actual sale, the court noted that indefinite, maximum efforts to ensure secrecy likely amounted to an unreasonable “promissory restraint on alienation.” In other words, making a maximum effort at secrecy could—in the eyes of the appeals court—unreasonably curtail the ability of the buyer to loan or sell the work, even in a private sale, since the mere possession of the painting by the buyer amounts to the implication that it had been sold at some point. Though it avoided relying on this as a reason for reversing the district court, the appellate decision called the rationality of Hoffman’s confidentiality provision “tenuous at best.”

It would be a mistake to think the ruling prohibits confidentiality agreements that demand that even the sale remain secret. The court leaves the door open to those kind of arrangements, “but you have to restrict it,” Michaels said. Drawing from Lévy’s testimony, the appeals ruling notes that such confidentiality provisions—not uncommon in the art world—are normally explicit and “typically apply for a fixed period of time or within a fixed geographical territory.”
Following the ruling, if a confidentiality agreement is to withstand legal scrutiny, duration and region are two key aspects to clearly delineate. This won’t shock any attorneys, Michaels notes. “I don’t think there’s anything too incredibly groundbreaking [in this decision], or anything that is going to change the language of too many confidentiality agreements,” he said. What remains more opaque is the question of for what amount of time courts would allow confidentiality agreements to muzzle future sales by demanding total secrecy. “This case doesn’t really answer that,” Michaels added. Indeed, cases involving art-world confidentiality agreements are rare, not to mention paradoxical, since they involve public disclosure of the lurid details meant to be kept secret.
But with collectors increasingly favoring private transactions over sale in public auctions, the ruling is also a reminder that all the parties involved with a sale, not just the intermediaries, must be bound by the legal agreements occurring as part of any transaction. Sellers looking to ensure paramount secrecy should both tailor the confidentiality provisions to withstand legal scrutiny and “be very clear about who the parties are who sign the confidentiality agreement,” notes Michaels. Even though the ruling’s direct legal effect impacts only the specific case and the region governed by the court (primarily Texas, Louisiana, and Mississippi), these broader lessons apply across the art world.
Isaac Kaplan is an Associate Editor at Artsy.
Related Stories