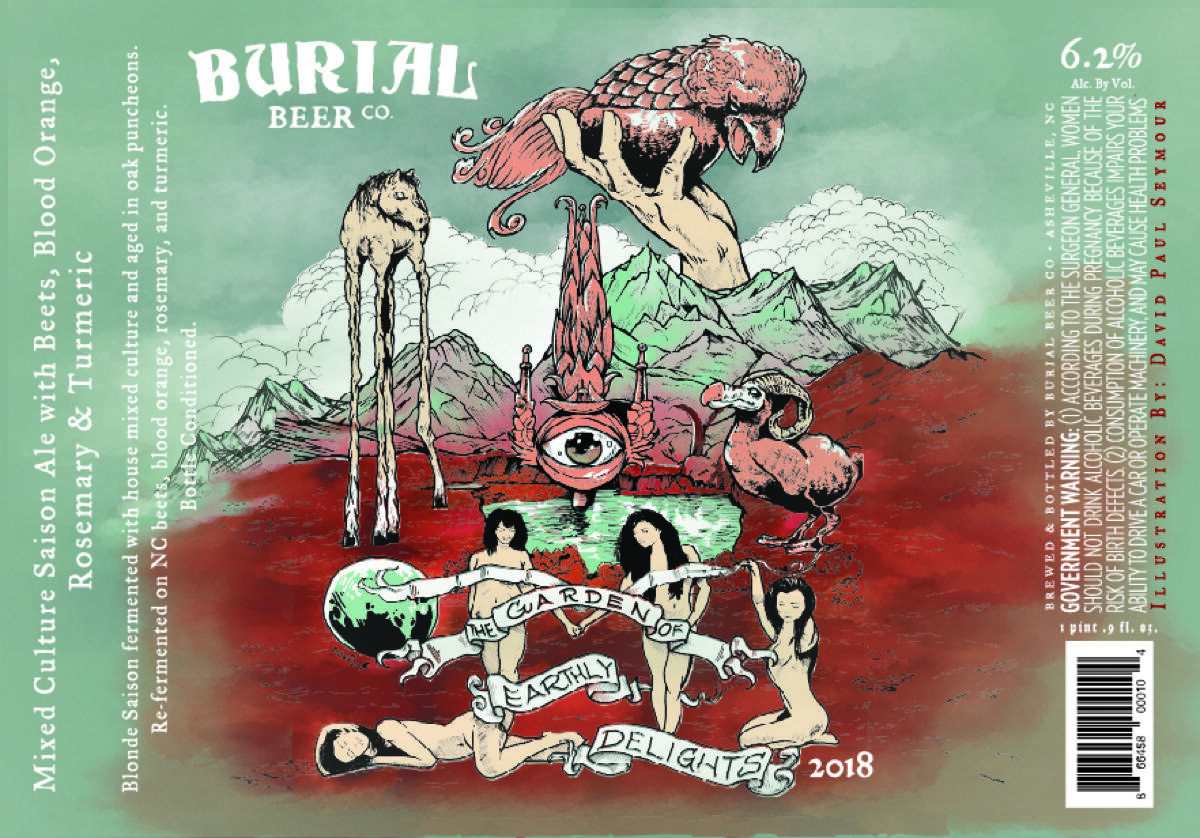 What do
Hieronymous Bosch
’s creepy and spellbinding canvases have in common with contemporary craft beer? A lot, according to the purveyors of Burial Beer Co. in Asheville, North Carolina. “Painters like Bosch found the beauty in darkness,” explained the brewery’s creative director, Kristen Oxtoby. “That’s the approach we take with beer, too. What you see isn’t always what you get, and trendy or beautiful isn’t always the most interesting.”
The folks at Burial Beer like to draw comparisons between their complex, funky brews and a wide range of boundary-pushing art, from 15th-century Boschian hellscapes to heavy metal album covers. And they wear these inspirations on their sleeve—quite literally.
One of the brand’s newest beers, “The Garden of Earthly Delights,” borrows its name from Bosch’s most famous painting, and its trippy label fuses a mix of visual references: 1980s skateboard graphics, psych band posters, Alice in Wonderland illustrations, and Bosch’s own brand of funny-frightening absurdity. The bottle shows a teal-and-coral world wherein a posse of nude nymphs consort with a giant floating eyeball and a dodo bird, suggesting that this ale isn’t just unexpected, but otherworldly. 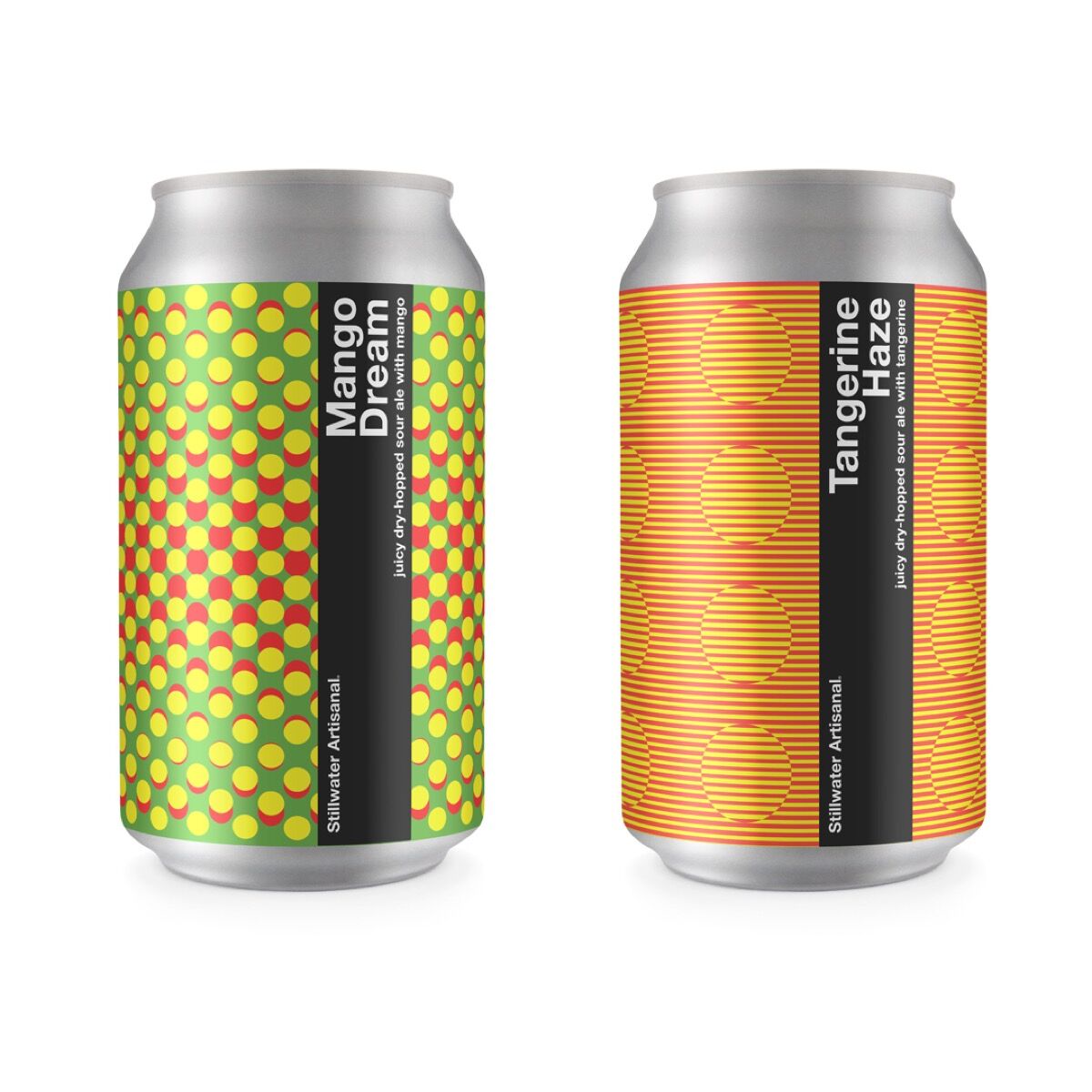 “I throw all kinds of stuff into the gumbo pot,” explained David Paul Seymour, the illustrator behind all of Burial’s labels, of his process. “And ideally, I come out with something that tells a story—about the beer you’re going to drink, and the imagination that went into it.”
These days, the craft beer industry is big, and it helps to stand out among bottles that hail from breweries across the globe. (At the close of 2017, there were 6,266 breweries in the U.S. alone, up 159 percent from 2012.) Walk into almost any shop devoted to the beverage, and rows of bottles double as canvases for mind-bending illustrations, inventive fonts,
trompe l’oeil
effects, and even some timely political messages.
Design authorities have taken notice, too—AIGA Eye on Design publishes a monthly column dubbed “Happy Hour,” which is devoted to the most inspired packaging innovations in the beverage world. A majority of them come out of craft beer.
The labels do more than just hint at a given beer’s heady fantasia of hops, ripe fruits, and spices—they’ve also become a venue for artists to showcase their work and push it in new, weird, and whimsical directions. (Beer graphics have even been likened to album art and book jacket covers, where artists and designers have historically gone wild experimenting with new styles.) 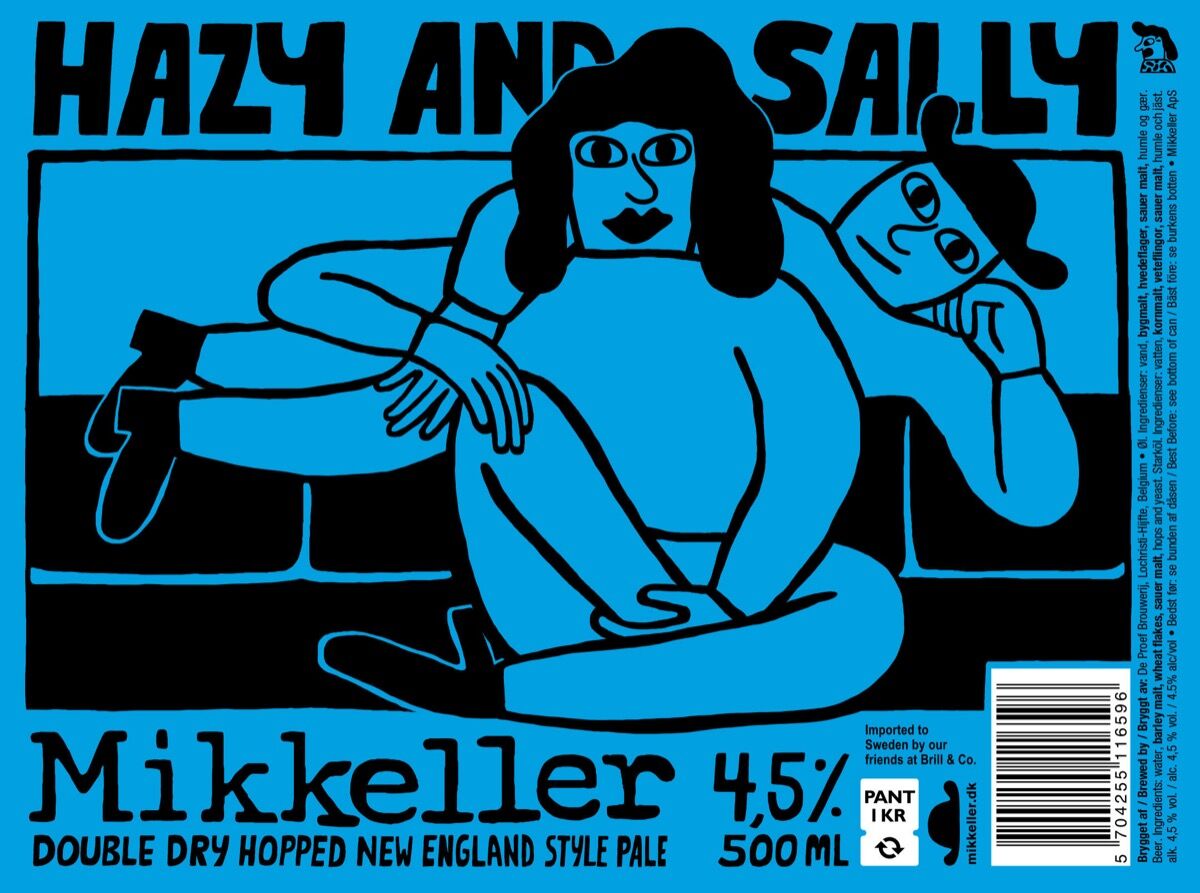 Advertisement
Seymour is one of those artists. After a career in architecture, he’d made a name for himself designing posters and graphics for doom-metal and stoner-rock bands with names like Destroyer of Light and Church of Misery. As much as he took pride in his work, it had also become formulaic. “I don’t know how many times I’ve drawn naked chicks and wizards and guys holding a sword,” he explained, chuckling, from his home in Minneapolis.
Burial Beer offered a different format for the illustrator—and an abundance of fresh inspiration. Seymour’s long conversations about art history, New Orleans jazz funerals, and fall harvests with company co-founders Tim Gormley and Jess and Doug Reiser pushed his work in new directions. (Jess, who was a college art history major, harbors a particular passion for
Northern Renaissance
paintings by the likes of Bosch and
Pieter Bruegel the Elder
.) Many of Burial’s cans’ graphics play with the duality of life and death; often, a single can will host two pieces of artwork, with both a light and dark side, nodding to the complexity and balance of the beers. “We take our imagination to a new level,” Seymour explained of the intricate packaging, “and I bring that back to the beehive of other art I make.”
Craft beer might be a surprising platform for visual experimentation, given the restrictions inherent in cans and bottles. They offer small canvases, and are required to present a fair amount of government-mandated information: ingredients, alcohol content, and warnings related to booze consumption. They’re also commercial products aimed at selling a good, which can mean that designers sometimes work for clients who have very specific demands for a recognizable and predictable graphic identity.
But many craft brewers see their work as a homegrown artistic pursuit much like artmaking. They relish creative risks—unexpected flavors and combinations; mercurial beer styles that swing from funky sours to rich stouts—and want their graphics to reflect them. 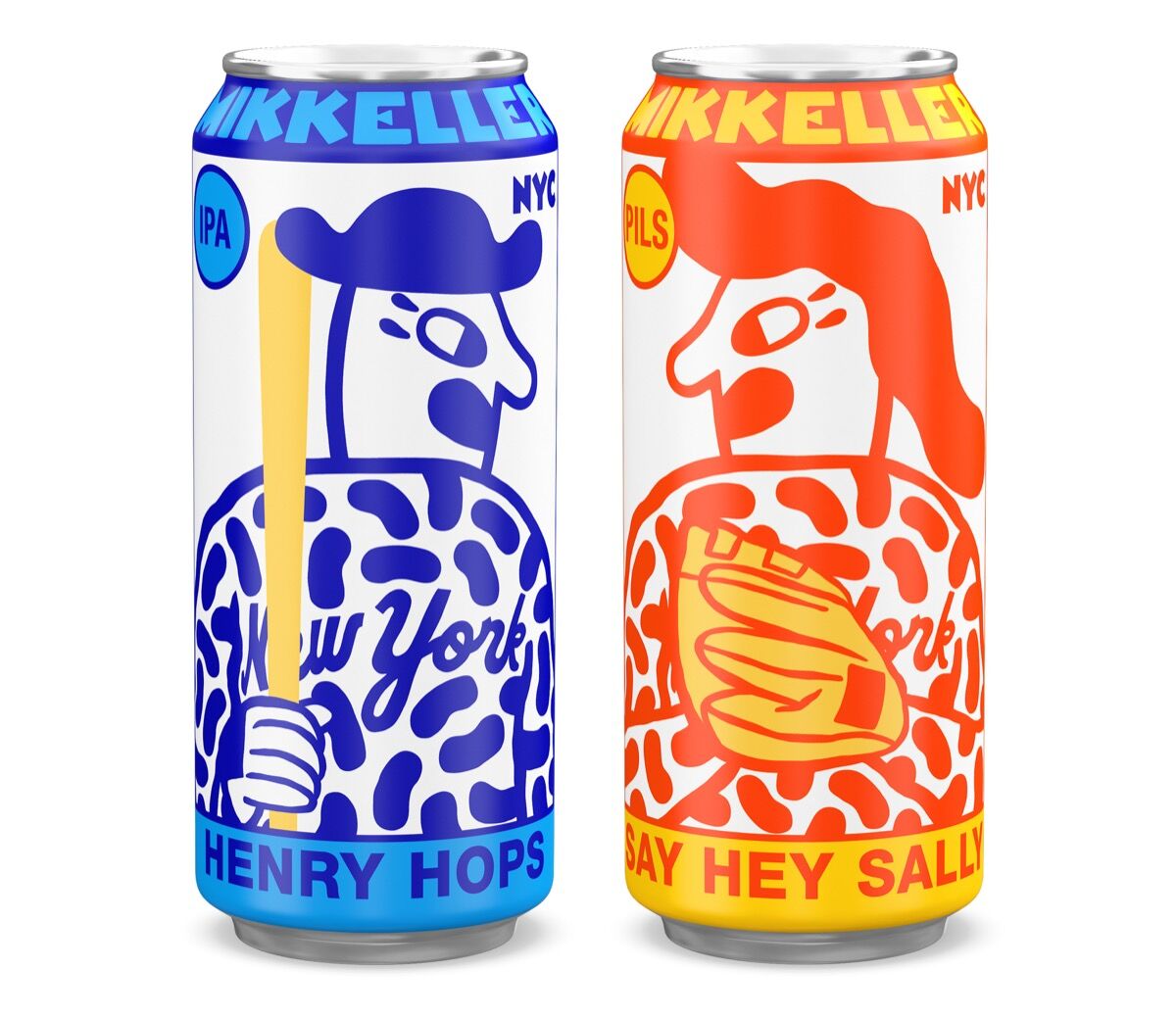 Take Stillwater Artisanal, widely regarded as one of the first craft beer operations to bake graphics deeply into its identity. Founder Brian Strumke, a former music producer and DJ, got into the craft beer game to satisfy his creative urges. The dual creative possibilities of brewing and packaging hooked him—not to mention the opportunity to shake up an industry whose design had become, in his opinion, too rote. Classic beer marketing, from the likes of Sierra Nevada, for instance, followed a rubric: a banner containing the beer’s logo, paired with the name of a particular brew (“Pale Ale,” “Summerfest,” “IPA Hop Hunter”).
The formula didn’t jive with Strumke’s atypical, shape-shifting beers, like a double IPA brewed with pineapple, cacao, and vanilla. “I wanted to blow [the formula] apart; deconstruct it and say: ‘Every beer should be its own piece of art,’” Strumke explained from his home in Seattle. “That would allow complete creativity.”
Strumke’s labels, which are designed in collaboration with Washington, D.C.–based artist Michael Van Hall, can be as unexpected as his beers. Some, like “Tangerine Haze,” a “juicy dry-hopped sour ale,” resemble psychedelic
Op art
experiments. A smoked India black ale called “Readymade: Vacuum” nods cheekily to
Conceptual art
master
Marcel Duchamp
, who popularized the readymade sculpture and forever changed how we look at art. Like Duchamp’s work, the beer is complex enough to make you think differently about ale, combining notes of smoke, caramel, pine, and dank fruity hops.
Often, it’s hard to find Stillwater’s name on its cans, overshadowed by patterns or tucked into corners. And this is intentional. According to Strumke and Van Hall, leaning on a name or a logo would stifle the brand. “Where other people were doing brand iconography or consistent visual language, we were doing what felt good to us,” Van Hall explained. “Commercial considerations aren’t primary in what I produce.…I try to push everything I need to have on the label to the side, so the thing that people see can stand alone as an image.” 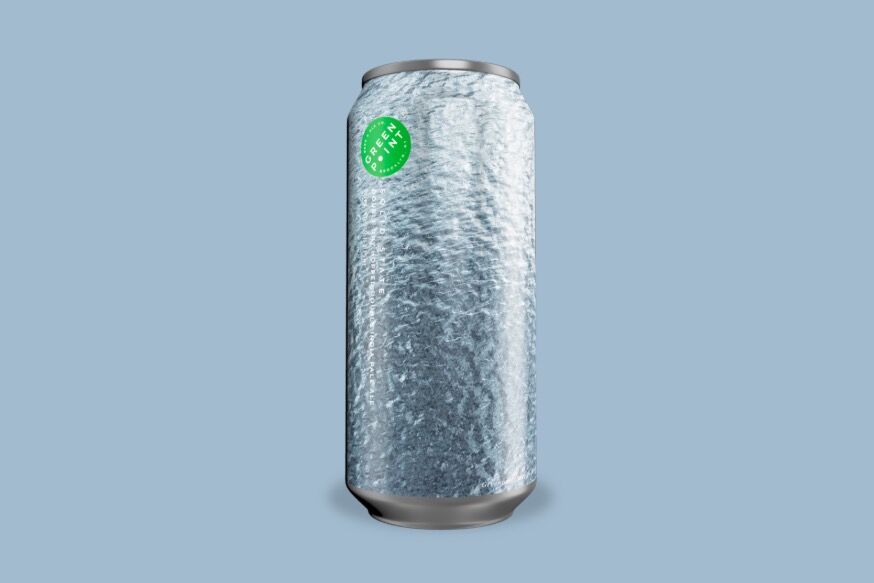 Mikkeller Brewery, out of Denmark, and Greenpoint Beer & Ale Co., out of Brooklyn, have similar art-first approaches when it comes to labeling. Keith Shore, Mikkeller’s creative director, uses each of its bottles to tell stories about two invented characters, Henry and Sally, the brewery’s “hop sniffing, long-nosed lovers.” (Yes, that’s a reference to the 1989 rom-com When Harry met Sally.) They careen across the labels, playing baseball, floating through starscapes, and surfing gnarly waves.
Shore’s playful line drawings were inspired, in part, by the cartoons embedded in MAD, Cracked Magazine, and Peanuts, and he wanted to make labels that were similarly lighthearted, clever, and accessible. “I never approached the designs as if there were any imposed rules of what a beer label should look like,” Shore explained. “I just wanted to make something that was cool to look at, and that people could connect with.”
Joshua Whitehead’s labels for Greenpoint have a tendency to tell more serious, timely stories. Soon after the 2016 U.S. election, the brewery released an India Pale Ale called “Resist.” Whitehead’s can design featured a sea of colorful “power” fist emojis, which have become synonymous with contemporary protests. “Everything we put out becomes an opportunity for me to comment on something,” Whitehead explained.
No craft brewery can completely divorce itself from the fact that its designs are a marketing tool. But in the process, many brewers and designers see the label as a space where they can exercise not only their creativity, but also appeal to the creative impulses of their drinkers. “These are products you don’t need to buy, that you spend a lot of money on, and they go away after you drink them,” explained Van Hall. “I like to think of my work as giving [the beer] more value. If I can tell you a story, bring you in, make you feel good, then I feel like we’re not just taking your money—we’re giving you something more that’s fun, that’s entertainment, that’s thought-provoking.”
Alexxa Gotthardt
Related Stories