Cristina Camacho’s Cut Canvases Have a Life of Their Own 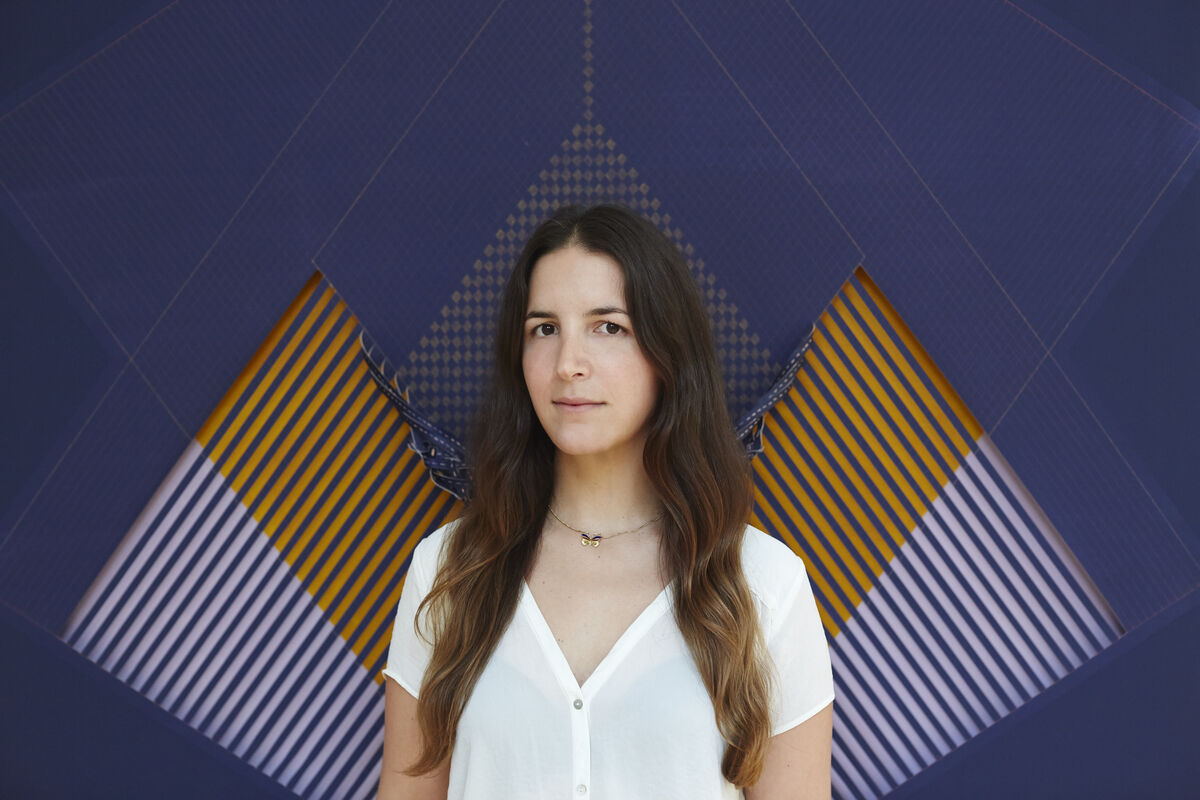 As
Cristina Camacho
will tell you, her paintings have personalities. A visit to Chelsea this summer confirms the anthropomorphic impact of the 28-year-old artist’s canvases—fresh from her Columbia MFA studio—that flutter, interlace, and extend into space. The day before the opening of her first solo show, Artsy visited Camacho at Praxis’s luminous second-floor space, nestled amongst the city’s most established galleries. She spoke calmly and candidly about her work as if she’d been making it her entire life. 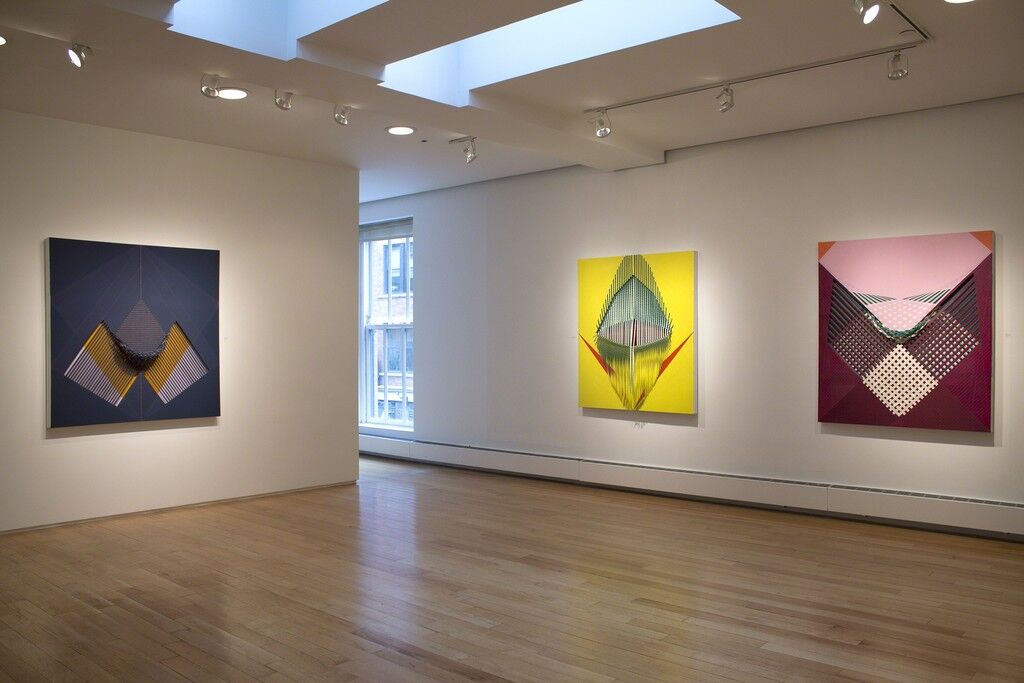 Camacho has, in fact, been playing around with paint since a very young age. Encouraged by an artist aunt, Camacho experimented with color and shape during holiday visits to her extended family's home in Medellín, some nine hours by car from her hometown of Bogotá, Colombia. Further spurred by parents who work in the textile industry and a brother in architecture, Camacho studied design, with a minor in art, as an undergrad.
Left unsatiated by the Bogotá university’s art offerings, she made her way to New York soon after graduation, where she jumped between classes at different schools, driven by a desire to experiment with as many materials as possible. “I needed to know how to paint—to get the know the material itself,” explained Camacho. “So I tried oil, acrylic, watercolor, embroidery, and more.” She landed on painting as her chosen medium, but her approach quickly veered from a traditional color-to-canvas relationship. 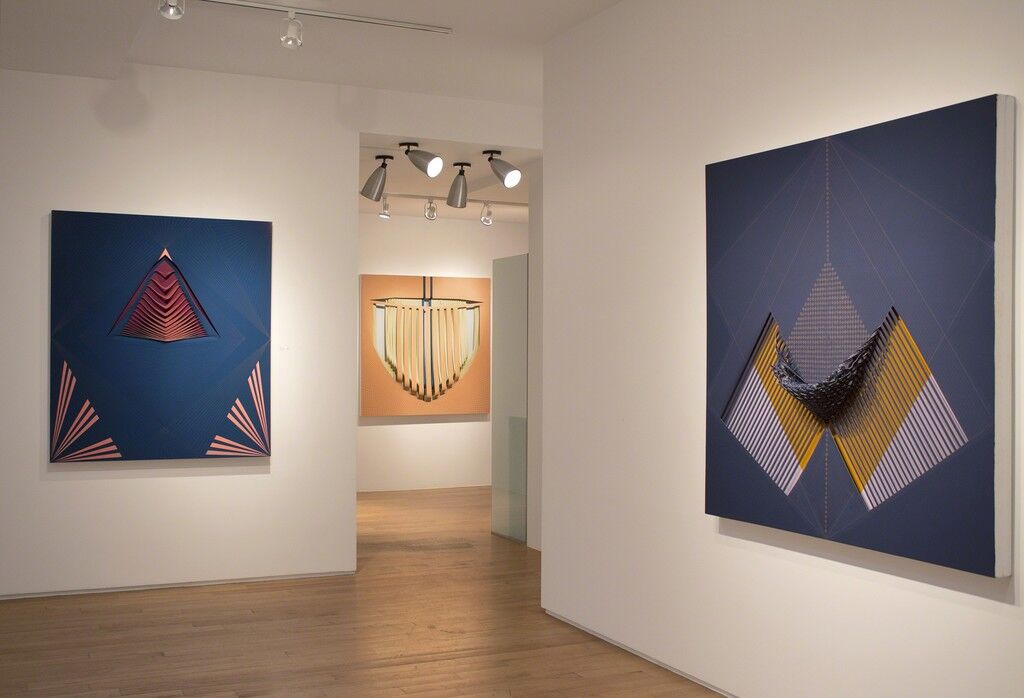 Advertisement
During a summer residency at the School of Visual Arts, she began to develop the process that would become the foundation for the paintings in her newest body of work, “Bilateral Dissections.” “In that moment, I was really interested in moving away from seeing the canvas as a surface where the paint is applied, to see it as a material,” said Camacho. “It was an exploration of material 100 percent.” From this focus came a group of works that were anything but one-dimensional. By creating incisions in the canvas with an X-Acto knife, then twisting and gluing the resulting strips and flaps, Camacho used the canvas itself to create dimensionality, form, and content.
But these paintings felt too rigid—symmetrical geometric abstractions resembling paintings by her 1950s and ’60s forebears, like
Frank Stella
,
Lygia Clark
, and
Jesús Rafael Soto
. “For a couple of years prior to Columbia [University], I made these pieces that were very formal, more symmetrical, and super controlled. They were more like constructions and titled Deconstructed Self # blah, or Constructed Self # blah,” explained Camacho. “They were very expected—I knew how the material was going to react because I was in complete control of it. Something was missing.” 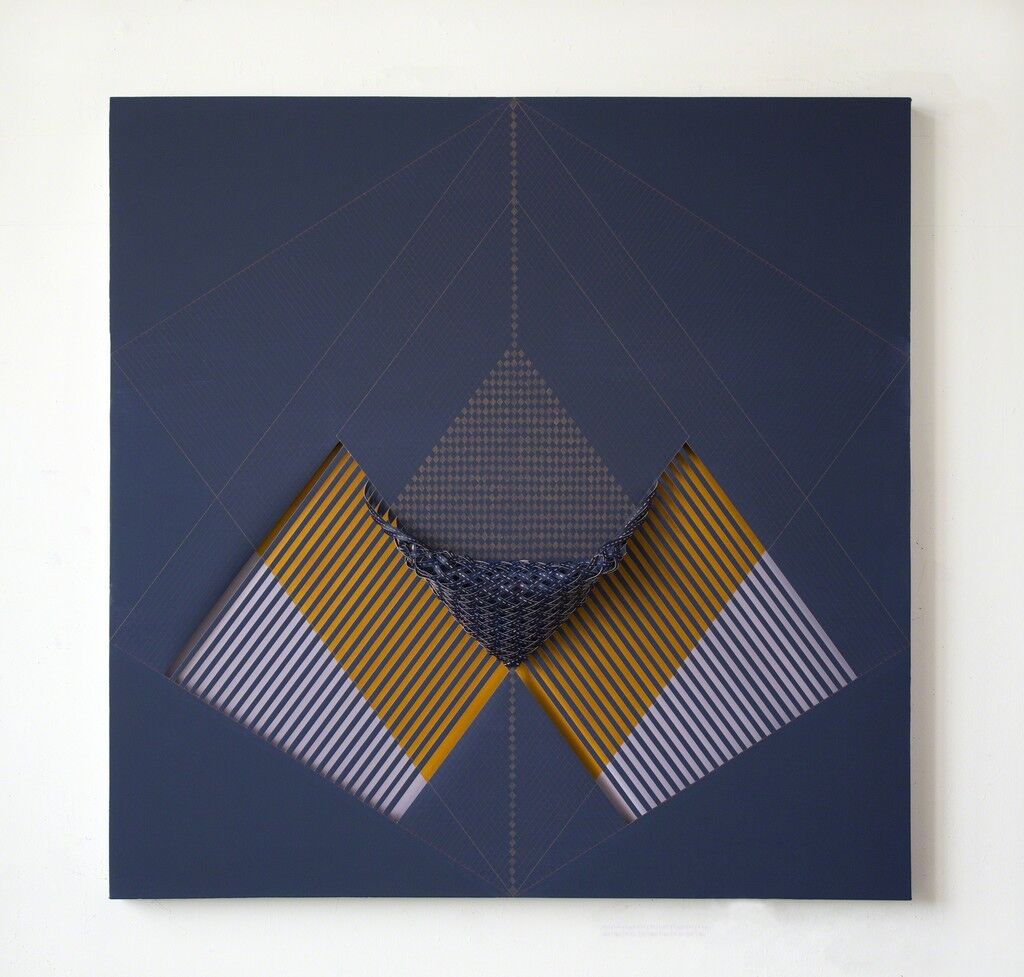 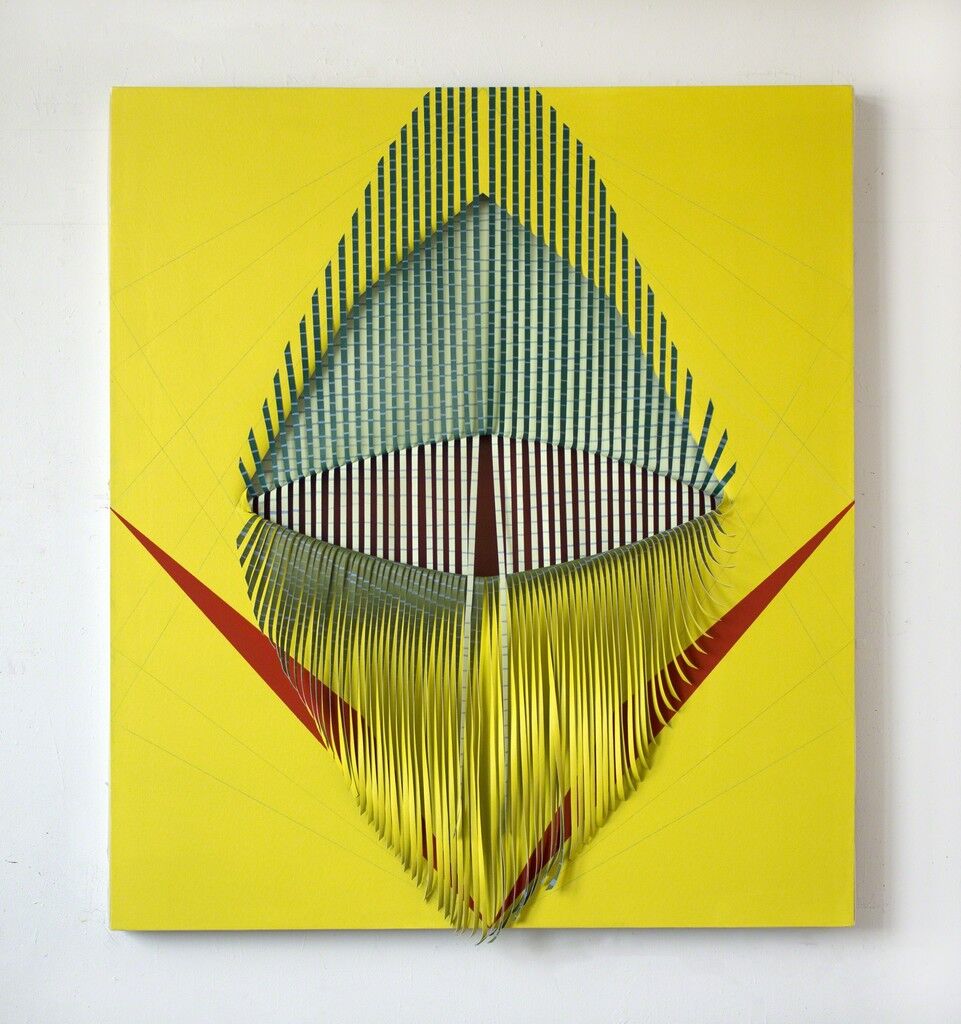 Cristina Camacho
Morphing Arcaceae, 2015
Praxis
That missing component was the element of chance, which has injected depth, movement, and something akin to animism into Camacho’s recent work. When she arrived at Columbia to pursue an MFA, she embarked on a process that she describes as “letting go.” First Camacho stopped working from sketches that might normally predetermine her direction or the final composition. Then she added layers of canvas and more incisions; played with the canvases’ tensions and how they interacted with her cuts; and let gravity interact with the fabric strips. “If the canvas is a little bit loose when I stretch it, it reacts differently than if it was taut. If you have gesso or acrylic on both sides of the canvas, it sags in a very different way than when it’s just on one side” said Camacho. “I finally understood that the material was free, and I needed to let the material be what it is.”
In the show at Praxis, Camacho’s surfaces twist, protrude, and droop, resembling gaping Venus fly traps, elaborate fractals, or the guts of magical creatures. “They’re still very abstract, but there’s also something very figurative in the pieces,” said Camacho. “They became alive—like people that I know, stories that I have, animals, and plants. They became dissections more than constructions.” 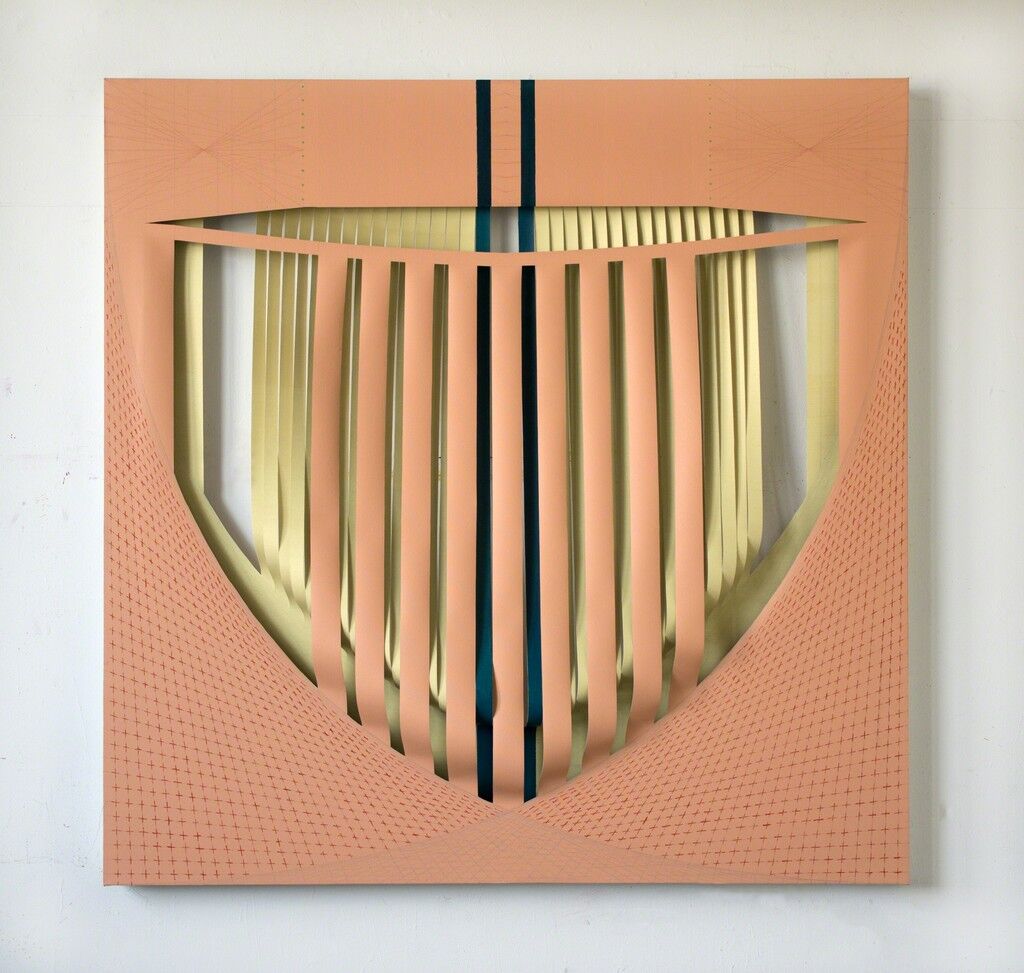 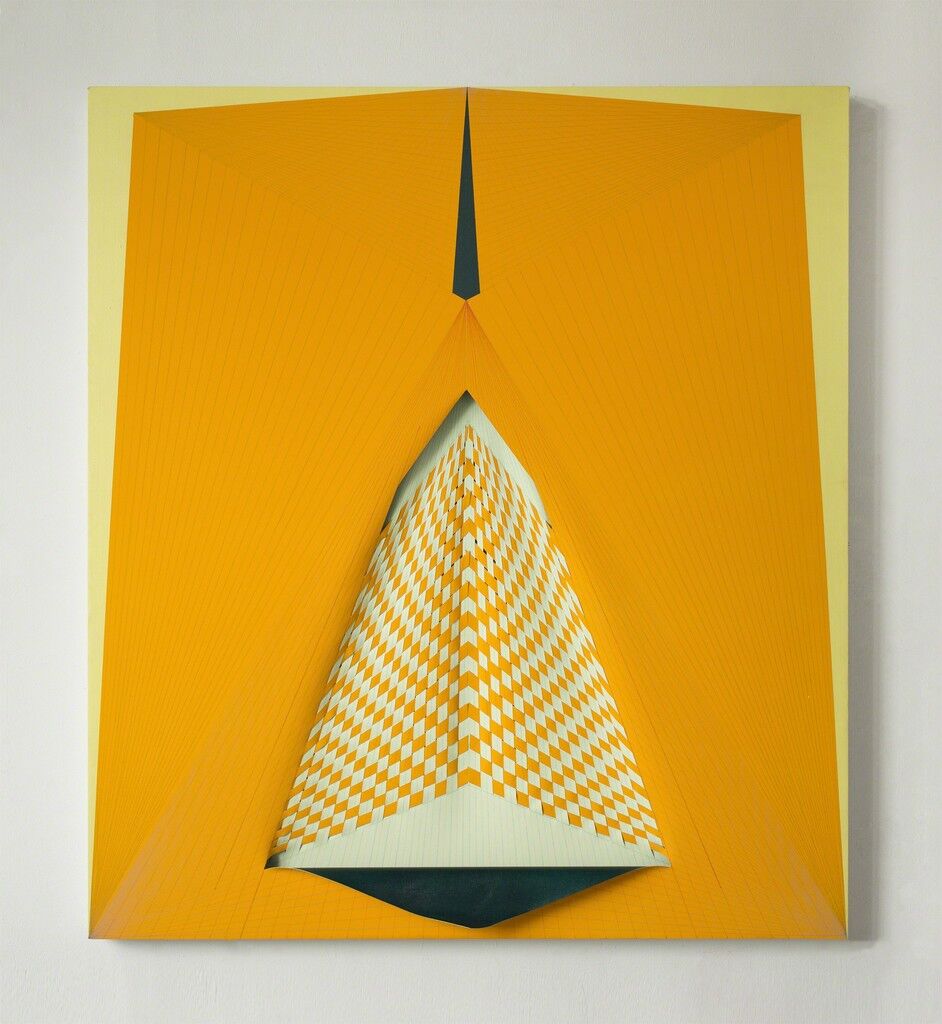 Cristina Camacho
Twelve Times Around, 2015
Praxis
Instead of reading as austere, the geometric patterns that organize Camacho’s surfaces create an architecture that allows for mesmerizing fields of bright color, accretions that allude to rampant growth, and holes that register as portals into exotic places. It’s no wonder that Camacho feels close to her paintings; their bold colors and lines draw you in, and the delicate balance of geometry and spontaneity holds your attention. “I feel I’m having a conversation with them. So I listen to their needs and I literally talk to the pieces,” said Camacho. “They’re my size, they’re almost my height, so I treat them as if they were a person. They have personality, they are characters, they are alive.”
Alexxa Gotthardt
“Bilateral Dissections” is on view at Praxis, New York, Jul. 2–Aug. 29, 2015.
Follow Praxis on Artsy.
Related Stories