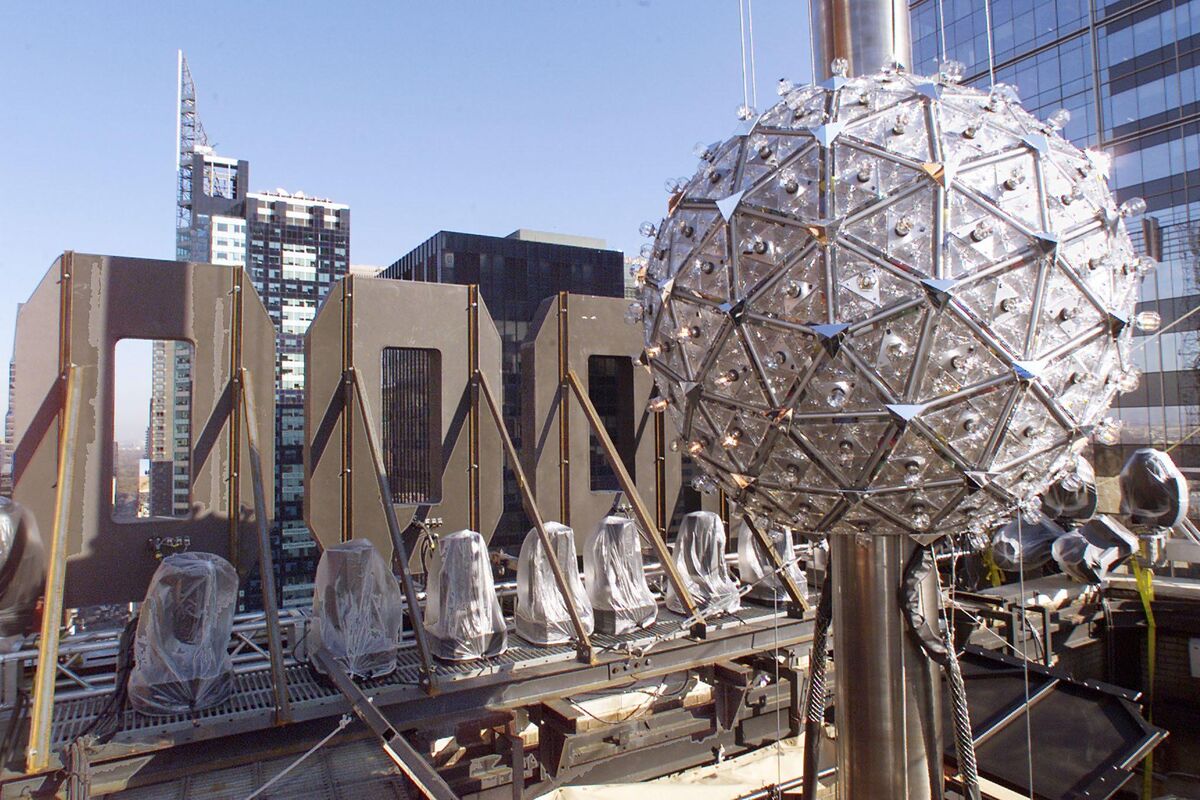 The New York Times Square Ball sits atop 1 Times Square during the test lighting on December 30, 1999 in preparation for the Times Square 2000 celebration to take place New Years Eve in New York. Photo by Timothy A. Clary/AFP/Getty Images.

Certain things happen, like clockwork, at the stroke of midnight every New Year’s Eve. Noisemakers blare; your glitter-coated party hat begins to shed; and an 11,875-pound ball covered in 2,688 Waterford Crystals descends down a flagpole in the middle of New York’s Times Square.
While the crystals are a relatively new addition, the ball’s relationship with time goes way back. In 1829, a British Royal Navy captain named Robert Wauchope created “time balls” to help ship captains keep more precise time. Located near harbors, these balls—initially red and made of leather and wood—would be lowered each day at 1 p.m. (or earlier, at noon, in the United States, where the first time ball appeared in 1845). Thus, sailors had a standardized time with which to calibrate their chronometers, the extremely precise marine watches that helped them determine longitude while at sea.
Although originally designed with the seafaring in mind, time balls eventually became a sort of community-wide event. It wasn’t uncommon for those on land to gather and watch the ball drop. Throughout the 19th century, an increased awareness of time coupled with rapid industrialization (which required greater synchrony among people and machines) made inventions like the time ball increasingly significant. 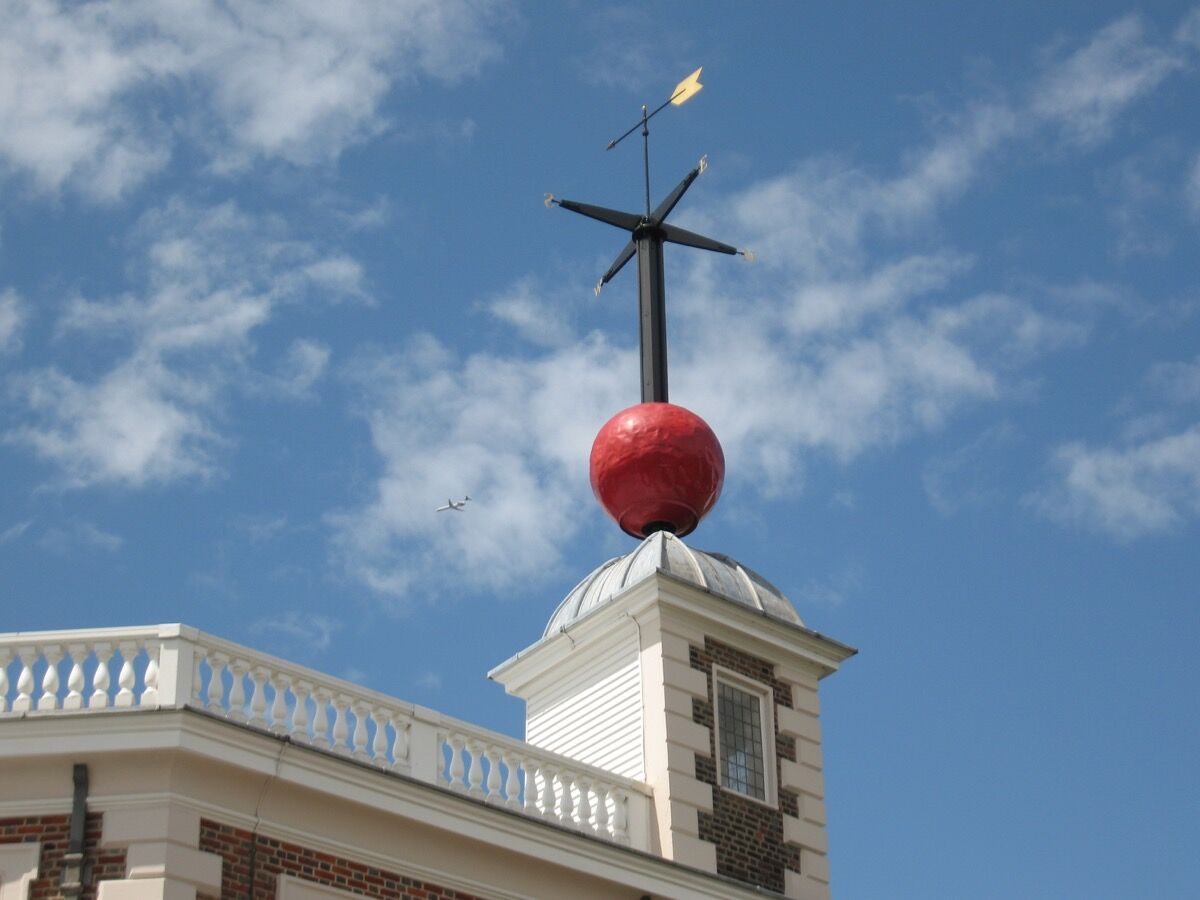 Time ball, post-descent at the Royal Observatory in Greenwich, England. Photo by Kris Arnold, via Flickr.

This isn’t to say, however, that time balls were all that accurate or reliable. If you turned your head for a second, you could easily miss the drop. As Southern Methodist University professor Alexis M. McCrossen notes in her 2013 book Marking Modern Times: A History of Clocks, Watches, and Other Timekeepers in American Life, “wind or ice could prevent the ball from being hoisted; trouble with the wires could interfere with the signal; the releasing apparatus could be triggered accidentally.”
For this reason, McCrossen goes on, “it is unlikely that more than a few people set their timepieces by the erratic time ball.” The ball, instead, might suggest a city’s “efficiency and punctuality.” By the 20th century, time balls became, for the most part, nonfunctional. (A few still run as tourist attractions—if you want to see a ball drop any time other than New Year’s Eve, head to the Royal Observatory in Greenwich, England.)
Who knew that the biggest time ball and the biggest tourist attraction of all was yet to come? 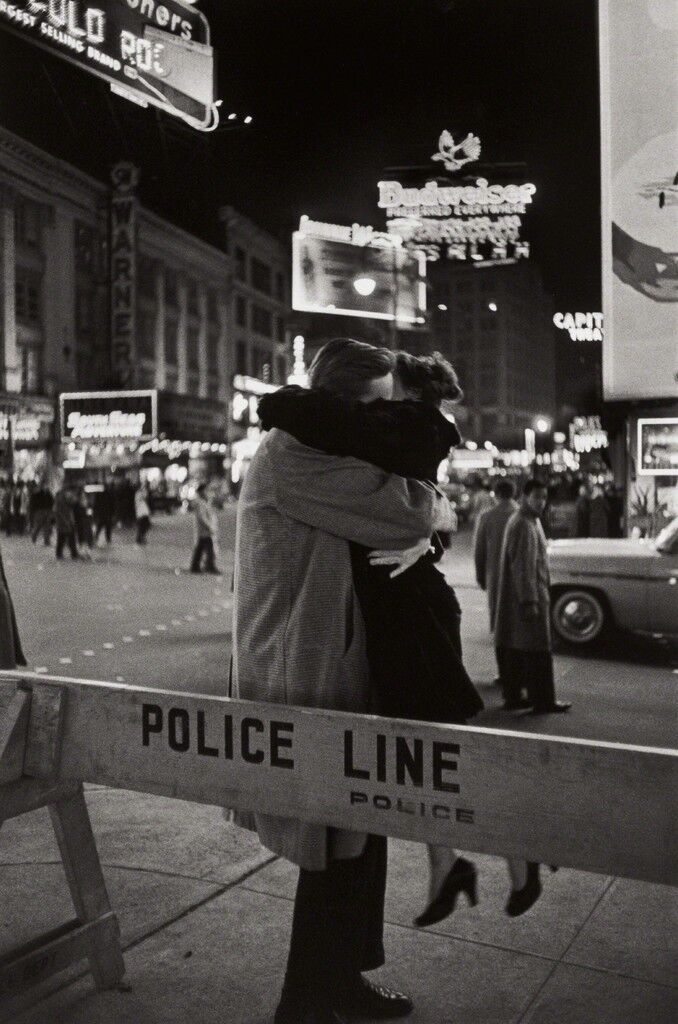 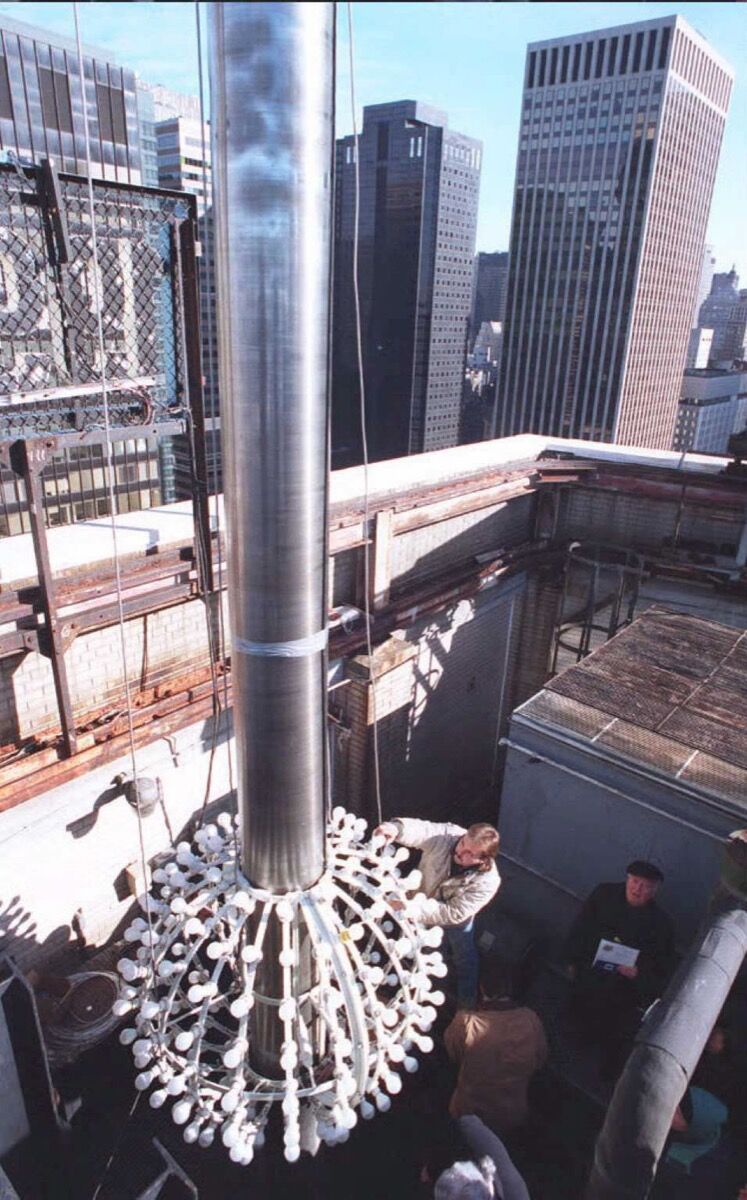 A workman replaces a bulb on the ball above Times Square 30 December in preparation for New Year's Eve festivities, 1995. Photo by Mark D. Phillips/AFP/Getty Images.

Advertisement
Since December 1904, New York partygoers have flocked to Times Square to celebrate the coming of the New Year—a tradition inspired, in part, by the New York Times and its move to One Times Square. A 1907 ban on fireworks challenged the newspaper to find a new grand finale to its New Year’s festivities. The paper rose to the occasion by commissioning an immigrant metalworker named Jacob Starr to fashion a bedazzled time ball.
Starr’s design—weighing 700 pounds and sporting a total of 100 25-watt light bulbs—was a glamorous departure from its 19th-century cousin. Starr and his company, Artkraft Strauss, were in charge of lowering the ball for the majority of the 20th century. They would also go on to make many of the signs that lit up Times Square.
Since 1907, the ball has been redesigned several times, every addition becoming brighter and more efficient. The 1955 aluminum iteration weighed a mere 150 pounds (far less than its 400-pound iron predecessor), and the 1995 ball was the first to be controlled by a computer. From 1981 to 1988, the ball was transformed into a giant apple as part of the “I Love New York” marketing campaign, but returned to its traditional roots in 1989. 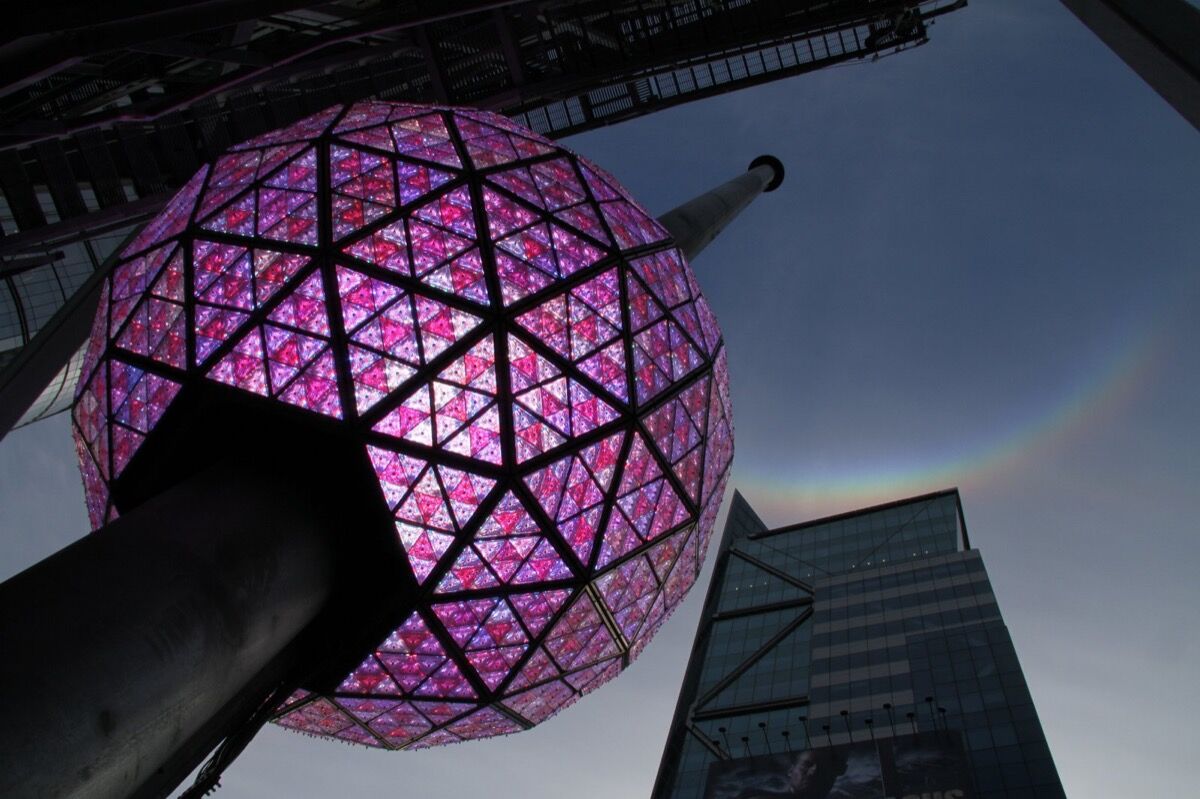 With the Times Square ball as their guide, cities across America have instituted similar drops in celebration of the New Year—although these don’t always manifest in the form of ball. In Tallapoosa, Georgia, for instance, a taxidermied opossum enshrined in Christmas lights is lowered. Myerstown, Pennsylvania, has dropped a massive Bayer aspirin tablet (perhaps in anticipation of the next morning’s champagne-induced headaches?). In 2014, Tucson, Arizona, dropped a 15-foot wide taco.
The Times Square Ball, however, is certainly the most well-known of them all. With a Twitter following of over 20,000 people, it has amassed quite a 21st-century fan base. Each year, the Ball signs on to Twitter a couple days before its big performance to update its followers on all things New Years, from performance rosters to new lighting developments. The Ball’s last tweet, posted December 31, 2016, reads in part: “Good night all, get home safe. Pretty excited to start my 364 day vacation.”
Sarah Dotson is Artsy’s Managing Editor.
Related Stories