Why the Cult of Egon Schiele Persists Today 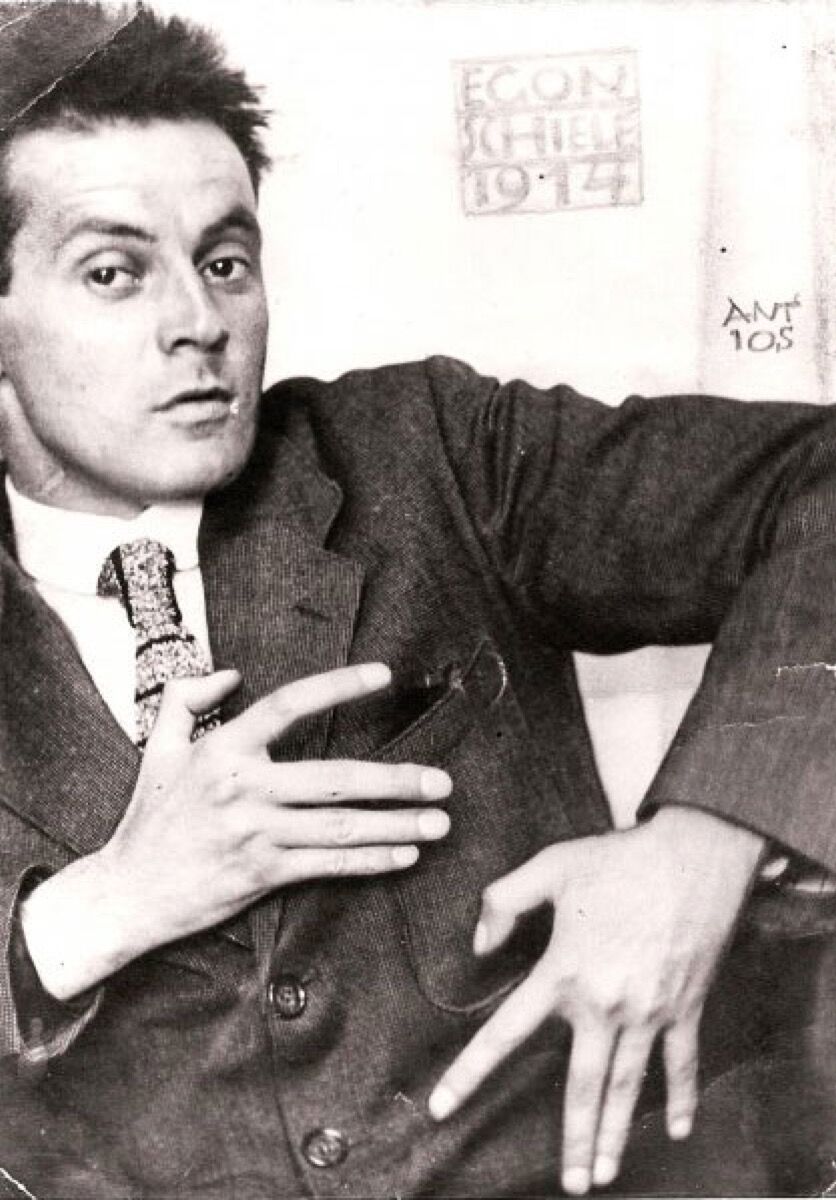 At the tender age of 20,
Egon Schiele
broke radically with the history of figurative painting, portraying the psychological state of his subjects rather than their physical characteristics. This approach resulted in a deep well of subversive drawings and paintings that unmasked his sitters—including, and perhaps most significantly, himself—as angsty, emaciated, gender ambiguous, and sexually experimental beings.
Since Schiele’s tragic demise in 1918 at the age of 28, a cult following has galvanized around the wunderkind Austrian artist, whose avant-garde and open-minded depiction of the human body and sexuality was unprecedented in the realm of critically acclaimed art. Below, we explore the forces that inspired the power of Schiele’s oeuvre—one that still spellbinds artists and art lovers the world over today.

Who Was Egon Schiele?

In his early years living with his station-master father, mother, and two sisters at a railroad junction in the small Austrian town of Tulln, Schiele displayed a knack for draftsmanship evident in intricate drawings of trains and their trappings. But it was personal tragedy that propelled him, once and for all, into a life devoted to his artistic practice, one accompanied by an ever-ballooning ego. His father, who frequented brothels in his youth (as was usual for well-to-do Austrian men of the era), was first rendered mad, then later died in 1905 from the sexually transmitted disease syphilis. His psychosis and death deeply affected the 19-year-old Schiele, but simultaneously unlocked a ferocious curiosity around sexuality, mortality, and the inner-workings of the human mind in the young artist. 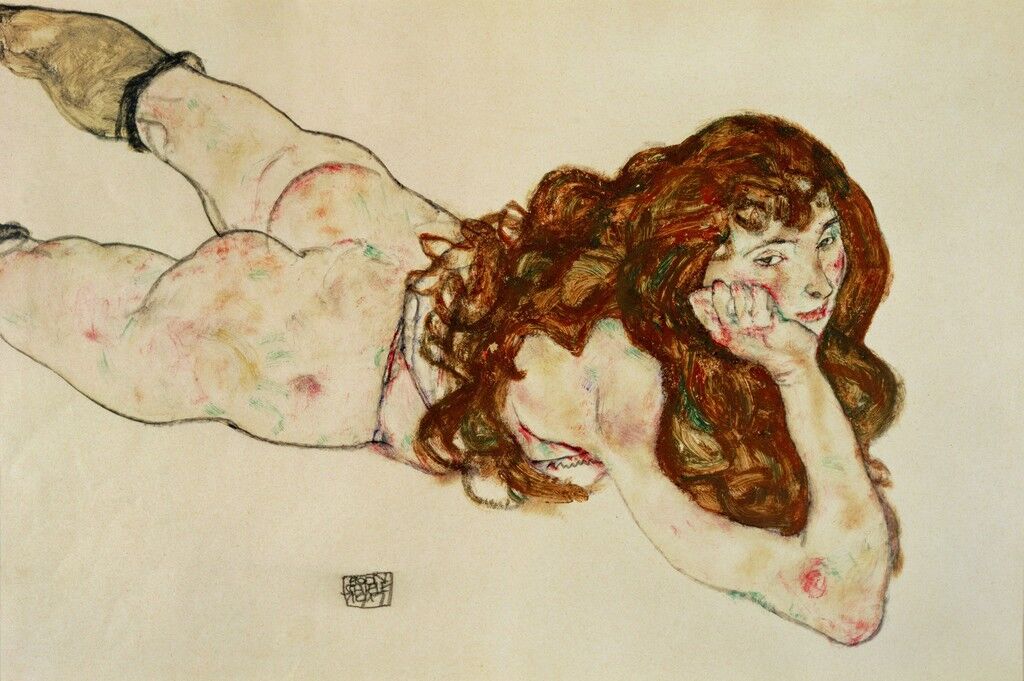 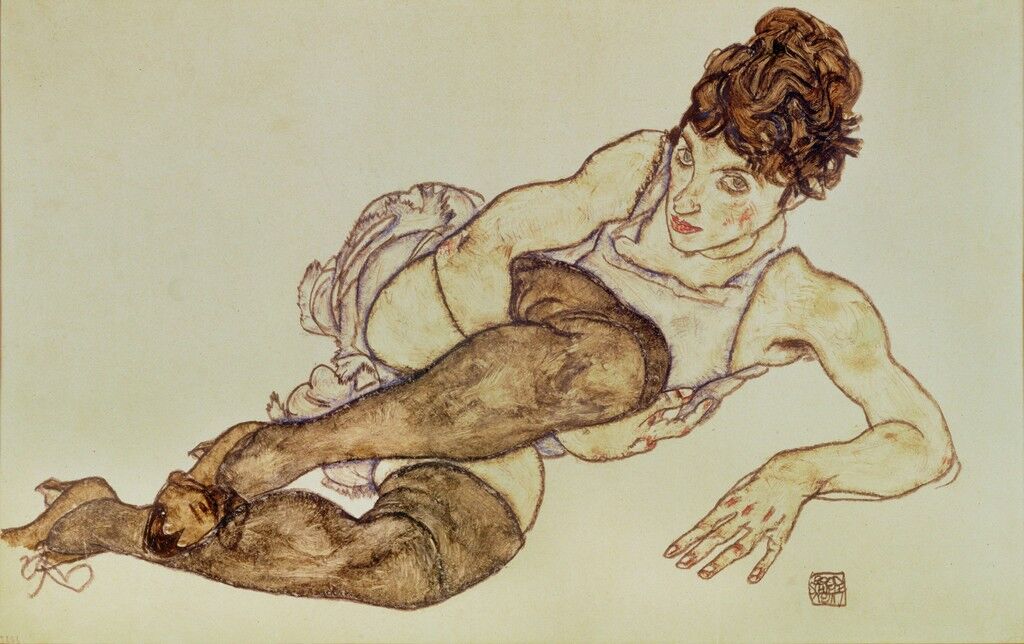 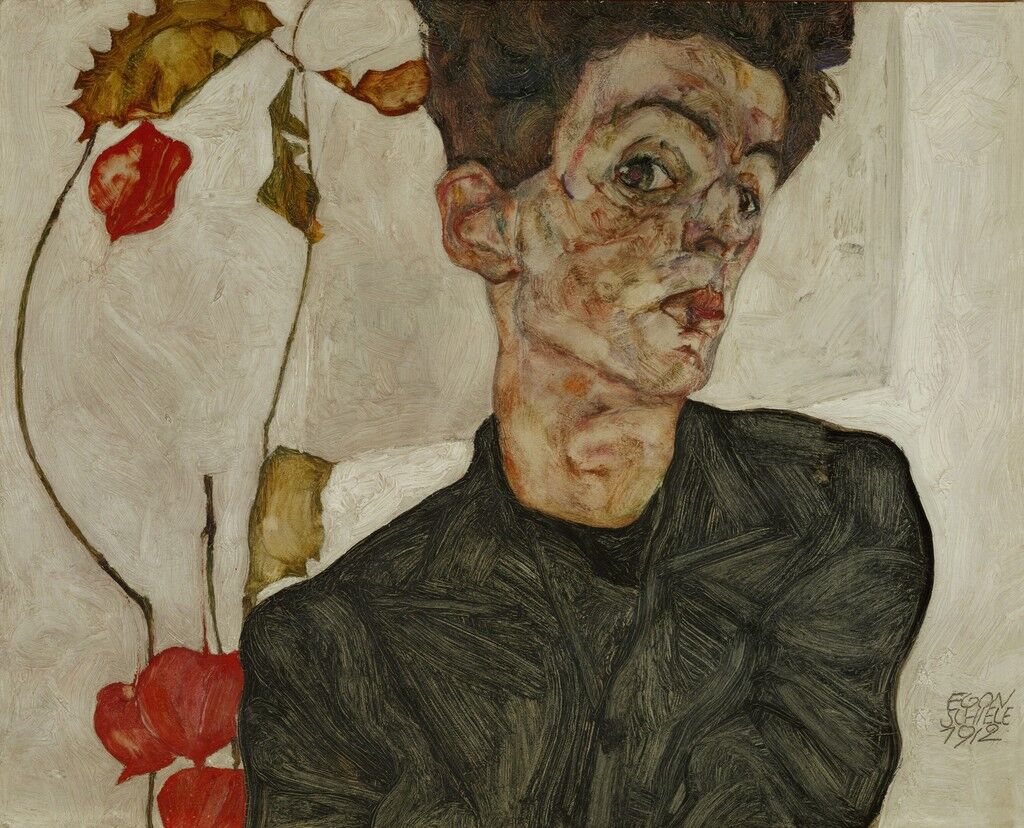 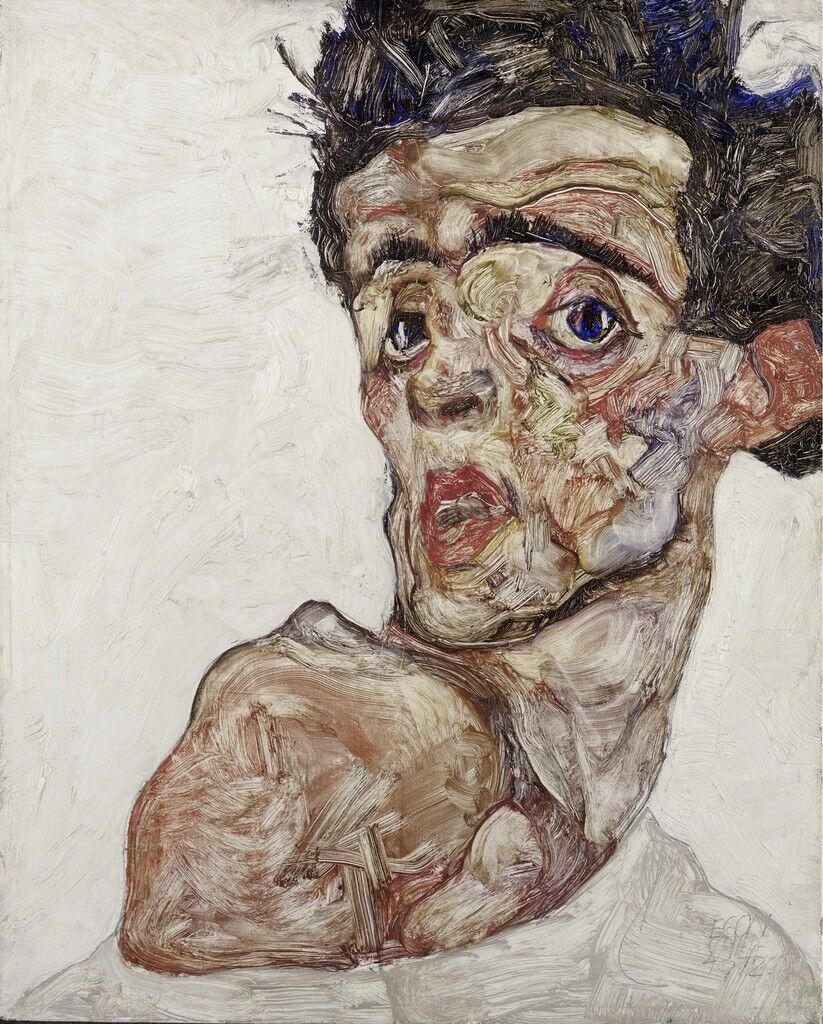 Egon Schiele
Self Portrait with Raised Bared Shoulder, 1912
Facing the Modern: The Portrait in Vienna 1900, The National Gallery, London
Advertisement
While Schiele’s skill was innate, it blossomed exponentially when he moved to Vienna in 1906, just after his father’s death, to study at the city’s prestigious Academy of Fine Arts. (Records show that Schiele won a place at the university over another applicant—by the name of Adolf Hitler—that year.) Though it wasn’t so much the Academy’s rigid lessons that motivated him to improve, but the city’s lively bohemian underbelly—a scene influenced by the likes of boundary-pushing psychoanalyst Sigmund Freud and gutsy painter Klimt—which sat at odds with the intensely moralistic authority of the time. Klimt’s dreamy, semi-abstract approach to figuration, in particular, was antagonized by the Viennese academic establishment as “dangerous.”
In 1907, Schiele and Klimt became acquainted. The elder artist took the younger under his wing, introducing him not only to his circle of artists, gathered together in Vienna’s
Secessionist
movement, but also to influential collectors and critics. It was then that Schiele began to rebel at the Academy, inspiring one professor, Christian Griepenkerl, to open fire on the bright young thing with the resonant howl: “You! You! The Devil shat you into my class.” After leaving school for good in 1909, he founded the Neuekunstgruppe with his art-school friends—including
Oskar Kokoschka
, Max Oppenheimer, and Paris von Gütersloh—and it was Schiele who wrote their manifesto, motivated by Klimt’s own revolt from the establishment. 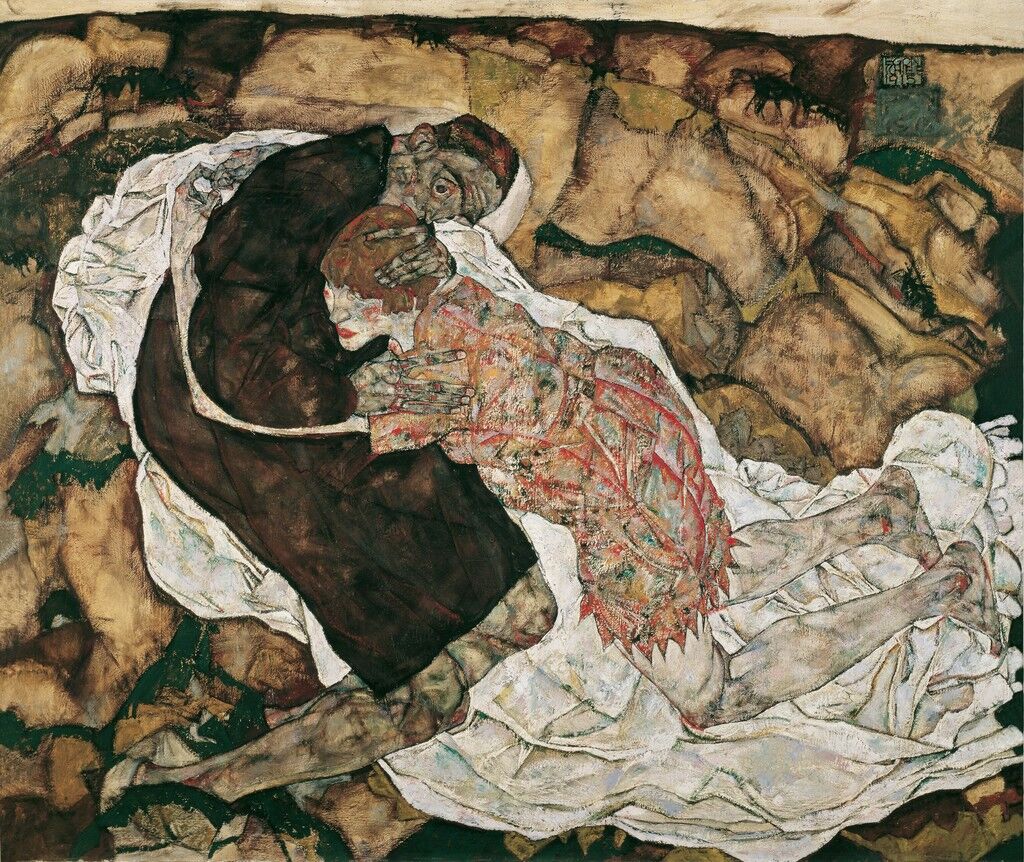 Egon Schiele
Death and Girl, 1915
Belvedere Museum
But by 1910, Schiele moved away from the geometric patterns that covered the figures of Klimt’s paintings, and established his own unique style. The shift was engendered, in large part, by Schiele’s interest in the human mind, inspired by a potent cocktail of Sigmund Freud’s influence in Vienna, his father’s descent into madness, and his own psychological struggles and obsessions (sorrow and sex, to name two). These concerns manifested in searing self-portraits that revealed a deep engagement with his psyche. In them, he explored his sexuality (in some, his body resembles a turgid phallus, and in others, he investigates gender fluidity by depicting himself with feminine features) as well as his anguish (his fingers are often gnarled, his body writhing, and his skin mottled with dark marks resembling bruises).
Schiele even more overtly, however, probed his interest in the erotic through portraits of young women and men. Controversially, many of these muses were in their early teens, and one was his sister Gerti, with whom he was very close. Though, instead of objectifying their subjects, these paintings and drawings reveal the raw, honest urges of adolescents on the cusp of sexual discovery. Schiele understood the power of his work, too. In a letter to his uncle in 1911, he wrote: “I shall go so far that people will be seized with terror at the sight of each of my works of ‘living’ art.” 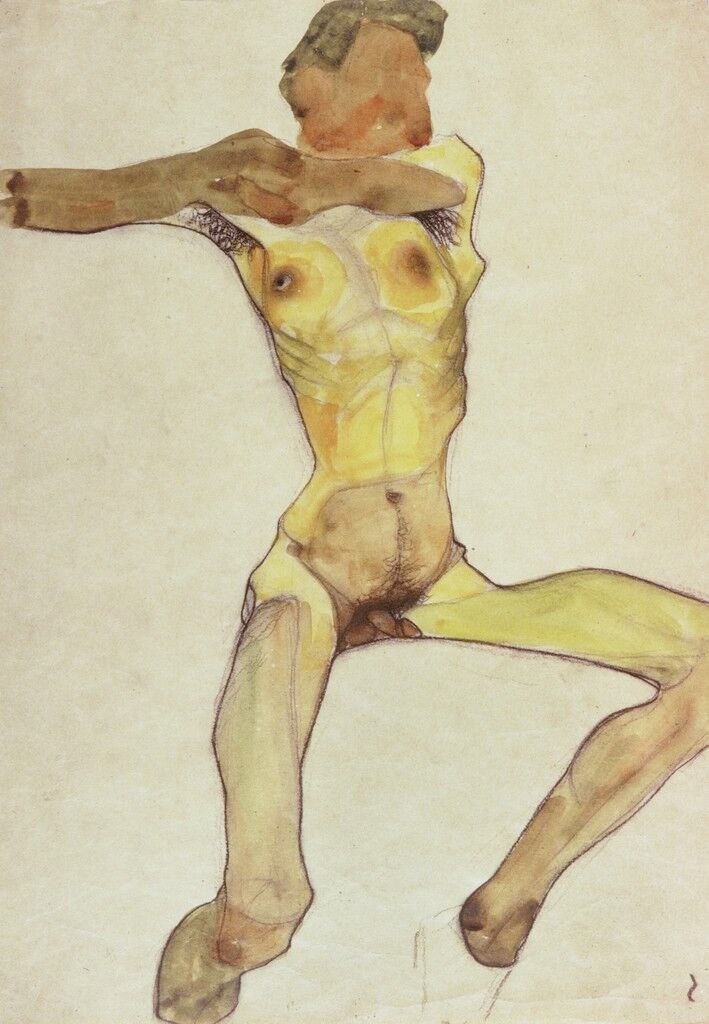 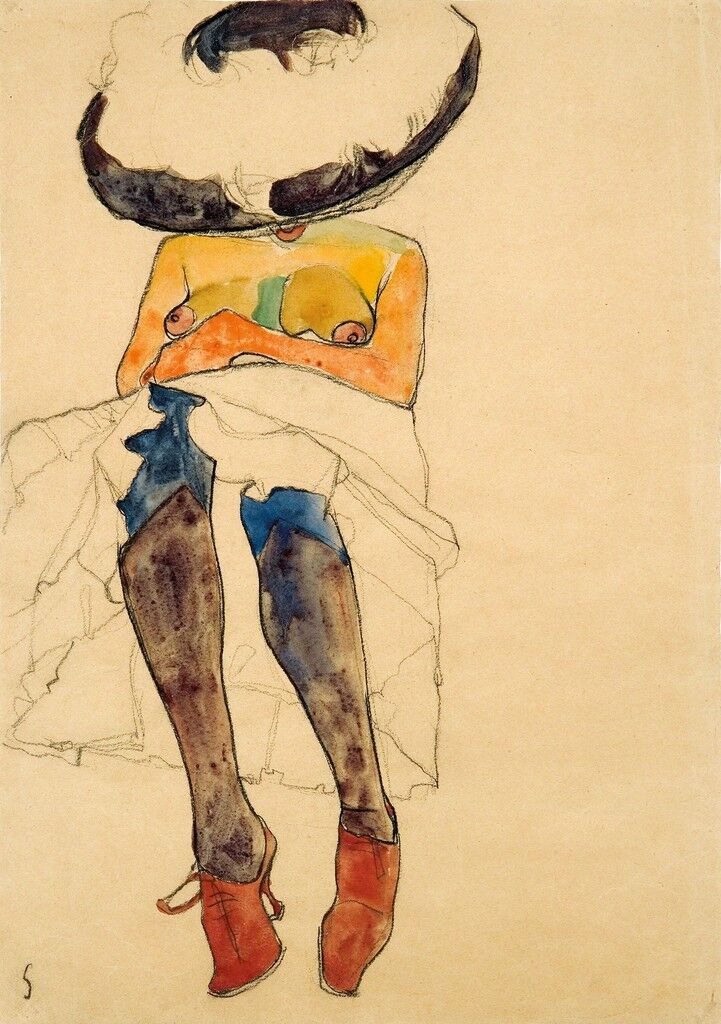 Why Does His Work Matter?

The body of work that Schiele left behind after his death from the Spanish flu in 1918 was hugely influential. Not only did it lay the groundwork locally for the Viennese Expressionist movement (crystallized in the manifesto he wrote for Neuekunstgruppe), but it also marshalled an expressive approach to representational painting on an international scale, spread even during his short lifetime in exhibitions across Europe. Indeed, the expressive quality of his work—whose writhing figures and sharp brushstrokes surge with emotional energy, and in turn move boldly away from straightforward representation—went on to inspire manifold movements that developed after him, including
Abstract Expressionism
. To this day, Schiele’s drawings and paintings stand as potent symbols of psychological struggle, emotional honesty, and sexual freedom.
Alexxa Gotthardt
Related Stories