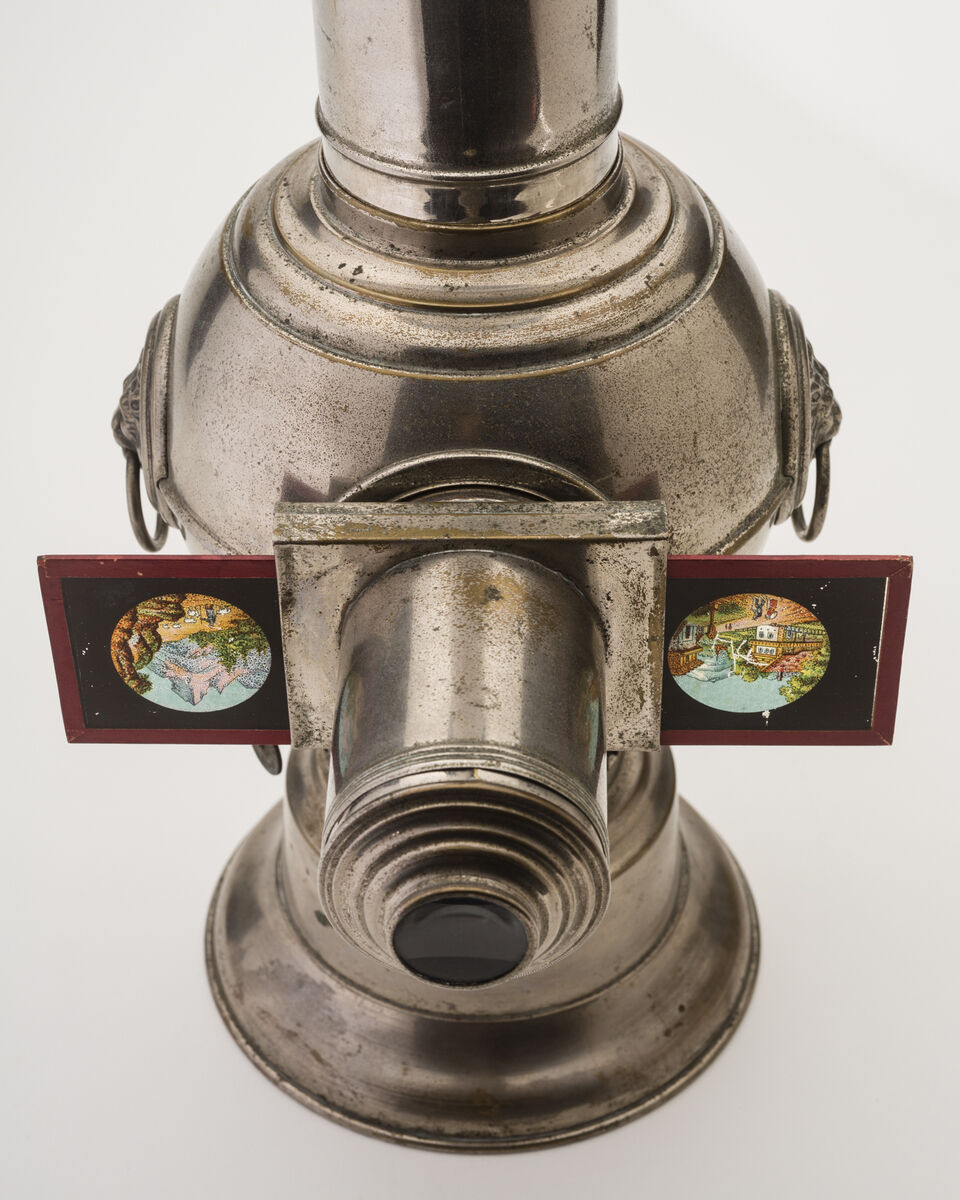 Photo by Alex Maness and North Carolina School of Science and Mathematics, via Flickr. 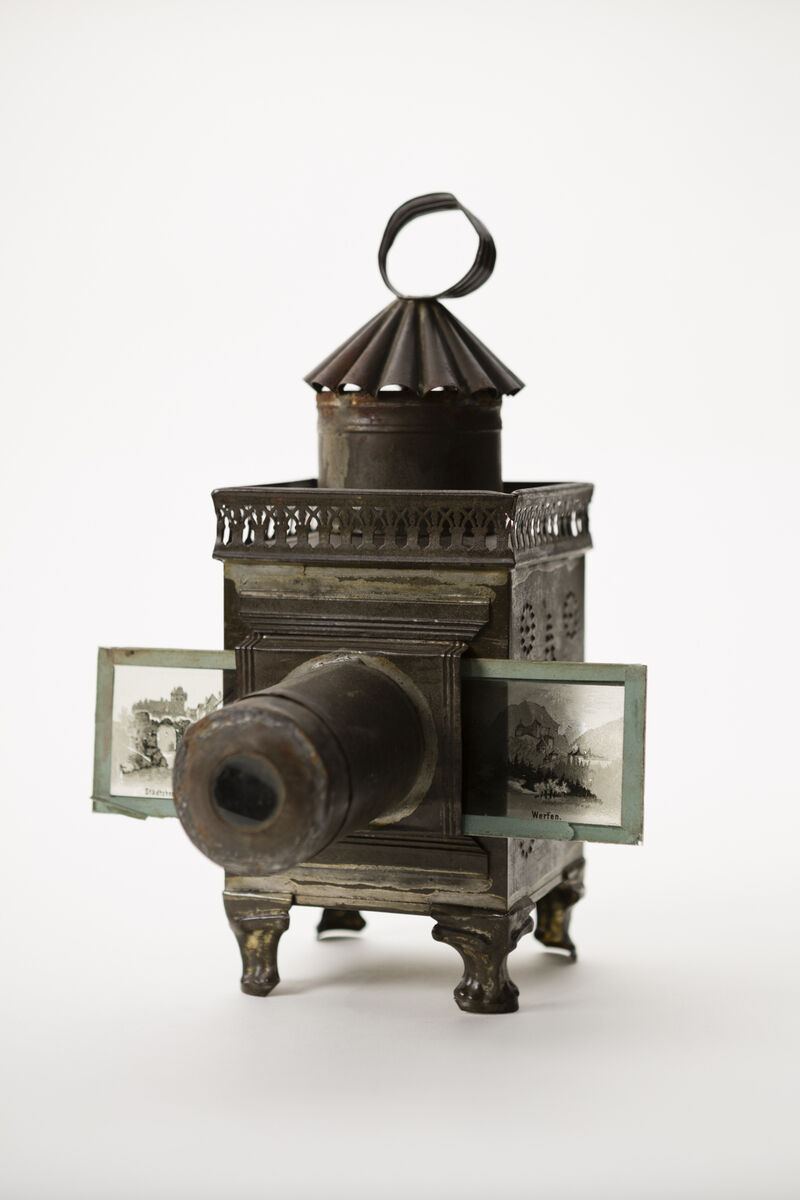 Photo by Alex Maness and North Carolina School of Science and Mathematics, via Flickr.

Three hundred years before the first movie projector, there was the magic lantern, a portable optical device that projected images on a wall or screen. A descendent of the camera obscura, the magic lantern was first developed as an aide to scientific inquiry, a primitive device that required a sequence of lenses, transparent slides, and a light source (initially whale oil, but later argon gas, limelight, and finally, the incandescent lamp).
This boxy apparatus, first described by the Dutch physicist Christiaan Huygens in the late 1650s, began as an instrument of learning but was later co-opted by traveling salesmen, who delighted audiences with hand-painted slides that were raunchy, ghoulish, and profane. Before long, the magic lantern was fully the preserve of sleazy showmen. As Benjamin Martin, a London-based instrument maker, observed in 1740, the magic lantern was “used to surprise and amuse ignorant people…for the sake of lucre.”
By the late 18th century, the magic lantern show, in which the operator would deliver narration to accompany the slides, was well on its way to becoming a theatre of the occult, culminating in the Phantasmagoria spectacle, invented by the Belgian showman Étienne-Gaspard Robert. In 1799, he staged a performance at the Couvent des Capucines, a convent in Paris, that utilized rear projection, in which a magic lantern is mounted on a trolley behind the screen, allowing the lanternist to create the illusion of a phantom approaching the audience. This was scary but not unpleasant: a kinetic light show, accompanied by glass harmonica, that satisfied the popular taste for macabre thrills. 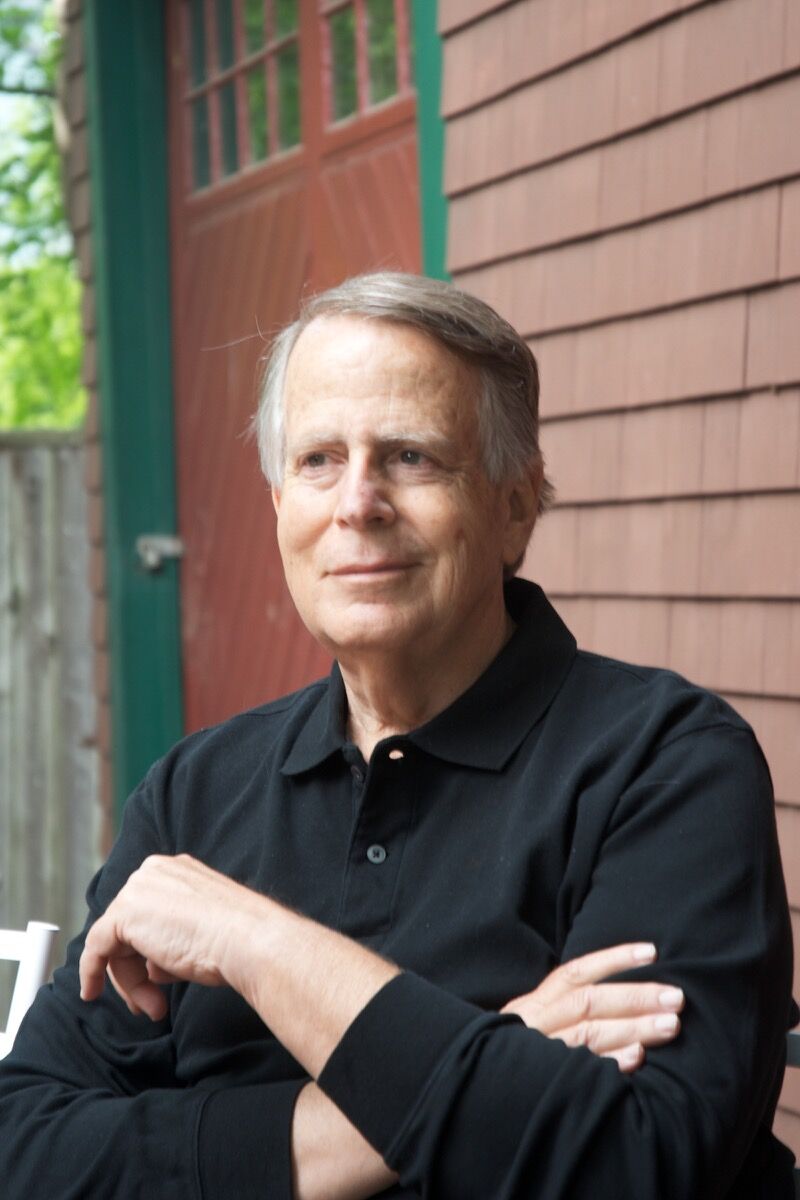 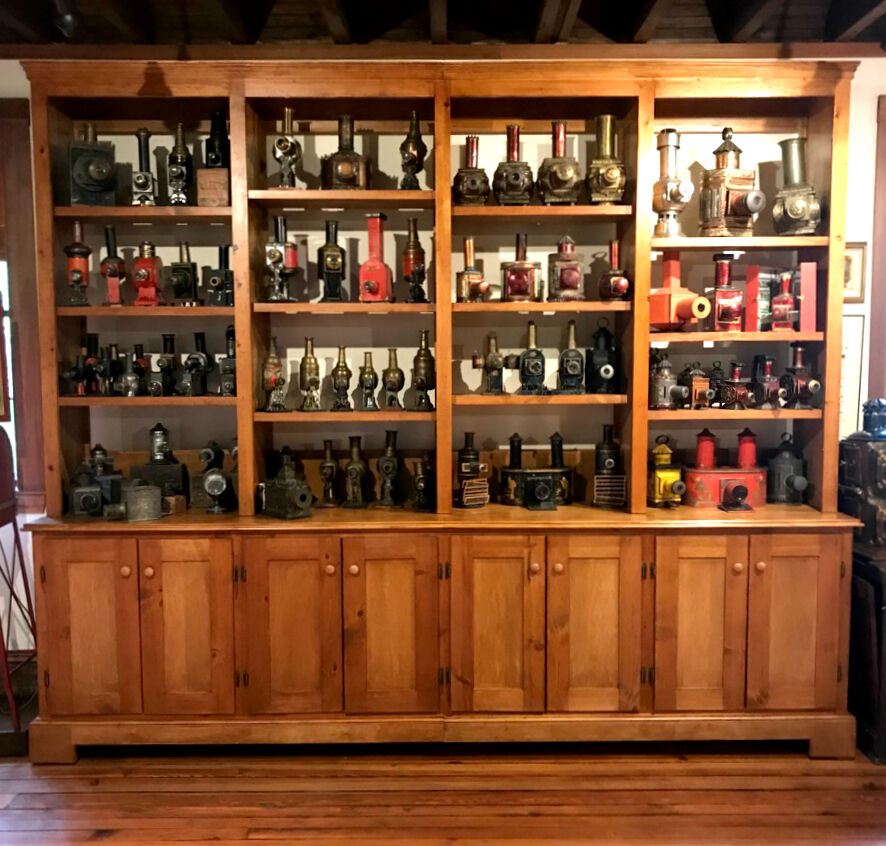 And so when Richard Balzer, one of the most important collectors of proto-cinematic instruments and optical toys in the United States, was invited to deliver a lecture at the Harvard Art Museums in June, he began with a warning to the audience: “You may find some curious and interesting things happen this evening.”
In the ensuing presentation, he recapitulated the sprawling life of the magic lantern, from its inception in the mid-seventeenth century to its demise just after World War I. The apogee of the magic lantern industry coincided with the advent of the Industrial Revolution, when hand-painted slides were superseded by mass-produced slides, allowing for a democratization of the medium. The magic lantern presaged, and was eventually usurped by, the cinema: By the time the Lumière Brothers debuted the Cinématographe in 1895, it was already on the path to obsolescence.
Balzer had brought with him a 27-inch-high biunial lantern made in Great Britain circa the 1880s, and he soon vacated the lectern to take a seat in the fourth row of the auditorium, where the device had been installed. What followed was a succession of slides, or slide combinations, projected on a large screen: a cane-wielding instructor demanding silence; an impish boy in striped stockings tossing a cat into a lake; and three mustachioed generals who, when rotated ninety degrees, appeared to be three horses with bit and bridle.
All the while, the crowd gasped, snickered, giggled, and, more than once, broke out in eager applause. Evidently, they had heeded the collector’s injunction earlier in the night: “These shows go better if you participate. Now, it’s not an active anarchy, but you can ooooh and ahhh.” 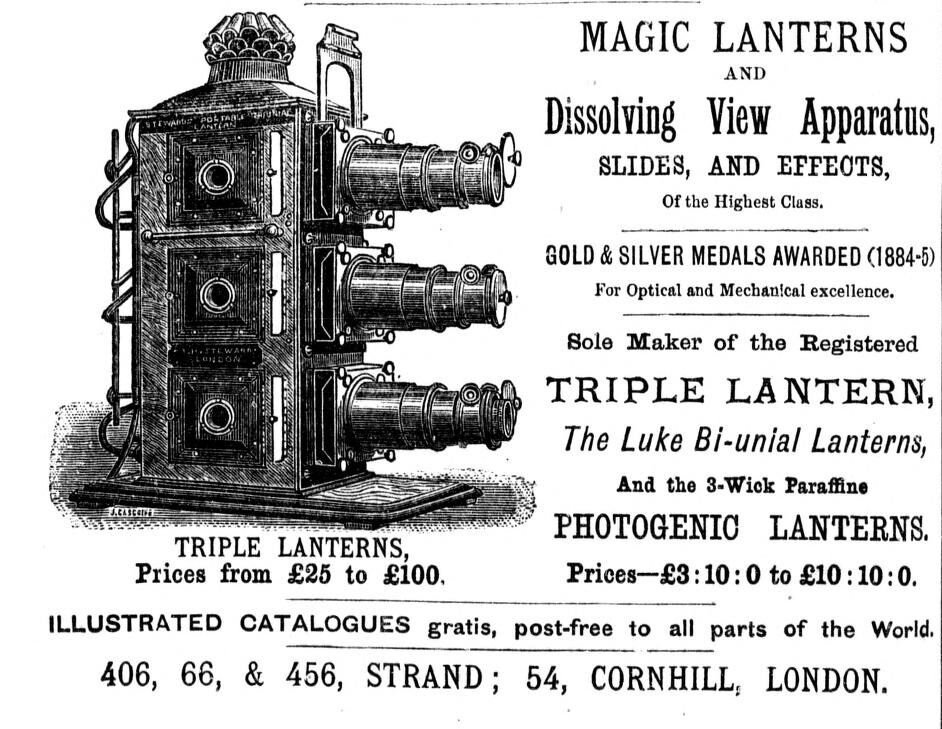 Advertisement
Balzer has a flair for the dramatic, and a talent for updating the archaic technology for contemporary audiences. Near the conclusion of his demonstration, he presented a satirical allegory: a version of Little Red Riding Hood in which the cowled protagonist is a surrogate for a gullible citizenry, and the lupine menace a stand-in for President Trump. With the aid of eight slides made through chromolithographic transfer (circa the late 1800s), Balzer told of how Little Red Riding Hood is asked by her mother to deliver packages to her grandmother, who has fled to a cottage in the woods “because she doesn’t have her documentation.” The narration—which riffs on Trump’s idiosyncratic pronunciation of words like “huge,” not to mention the much-debated size of his hands—moved with little warning into the realm of mordant social commentary.
A few weeks later, at his home in Brookline, Massachusetts, Balzer ruminates on the linkage between satire and the magic lantern, as well as a portable box with biconvex lens known as a peepshow, which were both widely regarded as instruments of flimflam because of their association with shadowy showmen. “Often, there was a more upper-class view that the peepshow and the magic lantern were childlike entertainments, not higher forms of entertainment,” he explained, noting that they often featured in “satire about how the public is gullible.” The devices often appeared in allegorical depictions of government avarice, such as a 1797 hand-colored etching in Balzer’s collection that shows a dapper William Pitt the Younger, then Prime Minister of Great Britain, picking the pocket of an oafish John Bull (the British people) as the latter distractedly stoops to look in a peepshow.
Much of Balzer’s collection is kept in a converted carriage house behind his home that had no electricity or running water when he acquired the property. “It was derelict—the last owner only used it for occasional parties,” he says. “But it’s just the kind of space for a wonderful Kunstkammer.” Balzer estimates that he has amassed 8,000 to 10,000 objects, including hundreds of magic lanterns; the carriage house a repository of curiosities meant to induce wonder, a survey of over 300 years of technological innovation in the realm of optical devices. One of the earliest examples in Balzer’s collection is a British-made tin magic lantern from the mid-18th century with a protruding snout and truncated chimney to expel fumes. The object is currently on loan to the Harvard Art Museums as part of “The Philosophy Chamber: Art and Science in Harvard’s Teaching Cabinet, 1766–1820,” which reconstructs a space at the university that functioned as a laboratory, picture gallery, and lecture hall around the time of the American Revolution. No magic lantern is complete without slides to go with it, and Balzer has also provided the institution with a set of nine mechanical slides outfitted with hand cranks to allow for animated demonstrations of celestial phenomena. 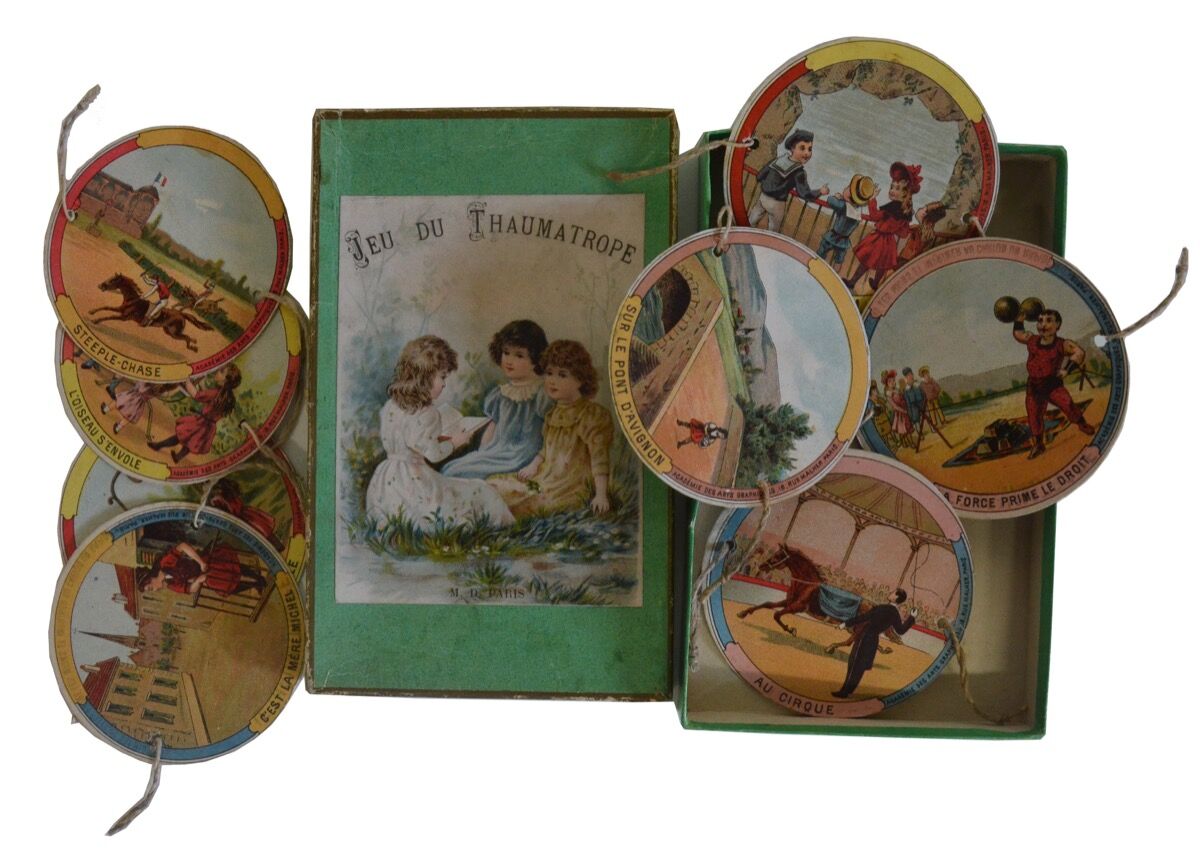 His collection also includes metamorphics (such as harlequinades, Jacob’s Ladders, kaleidoscopes, and objets séditieux), optical toys (like phenakistoscopes, praxinoscopes, thaumatropes, and zoetropes), all manner of peepshow (notably, an 1861 megalethoscope designed by Carlo Ponti) and countless other objects, as well as depictions of optical devices in various media.
Some of these devices were meant as toys for children, others as deluxe objects for customers with deep pockets, but all of them exploit the principles of optics to conjure the grotesque, strange, and otherworldly. Since Balzer began collecting, he has been a witness to the vicissitudes of the market: At one time, both Christie’s and Sotheby’s had a robust trade in magic lanterns, but a sizable chunk of the market has migrated to eBay. And, while mid-level items have lost some of their value in the last fifteen years, top-of-the-line items continue to go up. Yet, regardless of their ticket price, “most serious collectors do not collect [because] a given object is worth something; they just love what they buy,” Balzer said. “Collecting starts with the heart and goes to the mind.”
Before acquiring his first magic lantern in the mid-1970s, Balzer was not much of a collector—beyond a stack of comic books that his mother threw out when he left for college. He was, however, a born showman: a storyteller with a folksy patter and waggish grin. For him, the magic lantern is a device that needs to be operated, not swaddled in bubble wrap or set on a plinth. “Why do I like doing shows so much?” he wonders. “It’s a kind of sharing. It’s not only sharing the objects, but it’s sharing the objects in a way that they were used. This whole thing is an attempt to delight.”
—Christopher Snow Hopkins
Related Stories