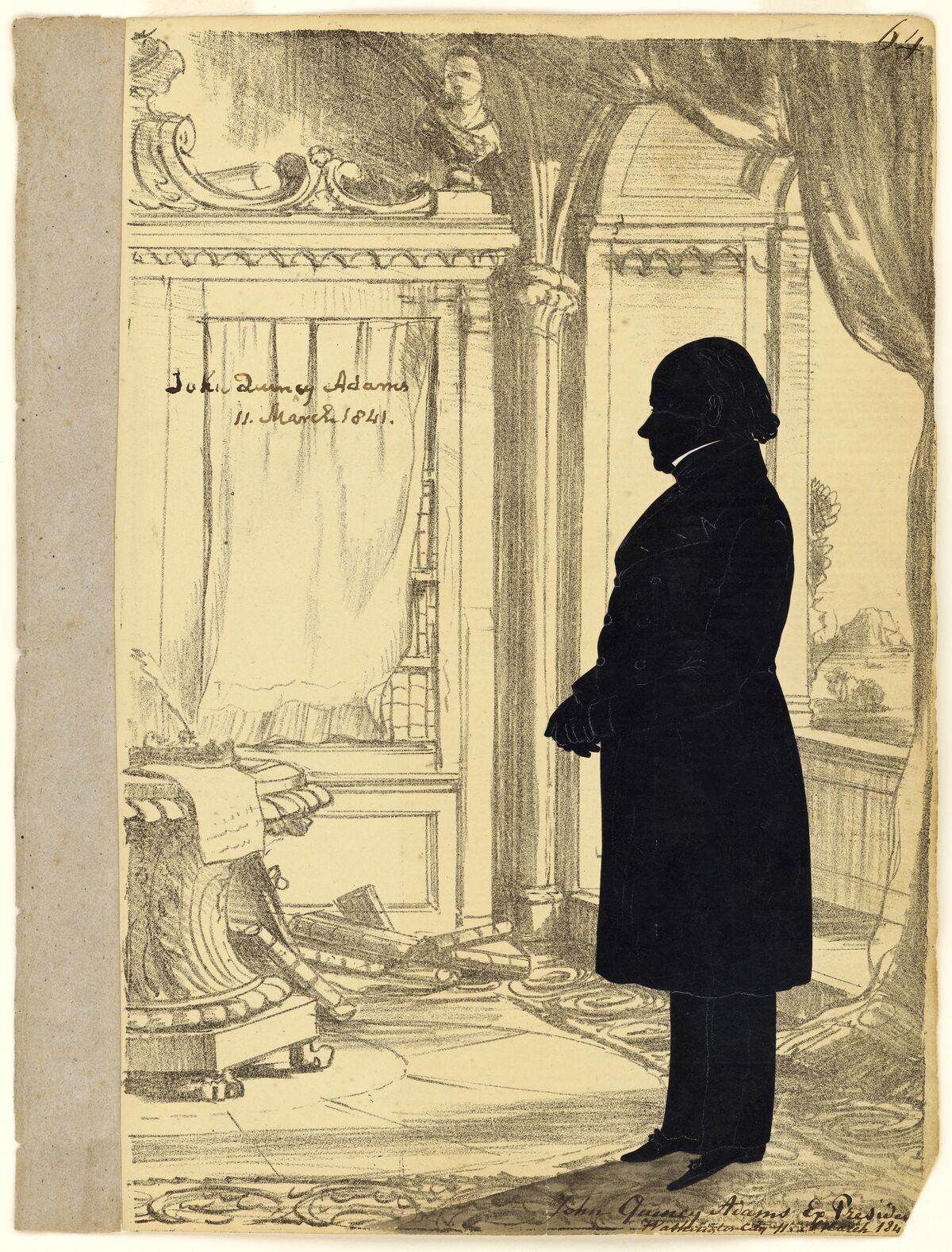 Even before photography emerged in 1839, there was a quick and thrifty way to create black-and-white portraits in under six minutes. No artistic training was necessary, and you could produce multiple copies simultaneously, on your own, with a device called the physiognotrace, an 18th-century version of the selfie stick. By comparison, painted portraits could require hours of sitting for a professional artist using costly materials, making them unaffordable for most people.
This populist art form was the silhouette, produced by a variety of cut-paper techniques resulting in a black profile of the sitter against a square, light-colored background, measuring roughly three inches. “Black Out: Silhouettes Then and Now,” a recently opened exhibition at the National Portrait Gallery in Washington, D.C.—a museum generally devoted to opulent oil portraits of historical figures—takes a look at historic and contemporary examples of this underappreciated medium, spotlighting lesser-known people whose legacies have been as vulnerable as the paper medium that once preserved their likenesses. Unidentified Artist, Flora and Bill of Sale, 1796. Courtesy of the Stratford Historical Society and the National Portrait Gallery. Unidentified Artist, Flora and Bill of Sale, 1796. Courtesy of the Stratford Historical Society and the National Portrait Gallery.

“We are really trying to express the vibrancy of portraiture, the necessity of it, the relevance of it, and the ways that it can cut across class and different races and genders,” said Asma Naeem, the exhibition’s curator and the National Portrait Gallery’s curator of prints, drawings, and media arts. “We are moving forward to tell a fuller American story.”
The peak popularity of silhouettes coincided, notably, with the beginning of that national story, during the early years of the newly independent American republic in the late 18th and early 19th centuries. “We have, I think, with the silhouettes in America, a merging of the right moment and the right art form,” Naeem added.
Mirroring the country’s newly founded democracy and foreshadowing how photography would soon make portraiture accessible to all, silhouettes depicted everyone from presidents and the first Hispanic U.S. congressman to dwarves, the handicapped, enslaved African-Americans, and same-sex couples. 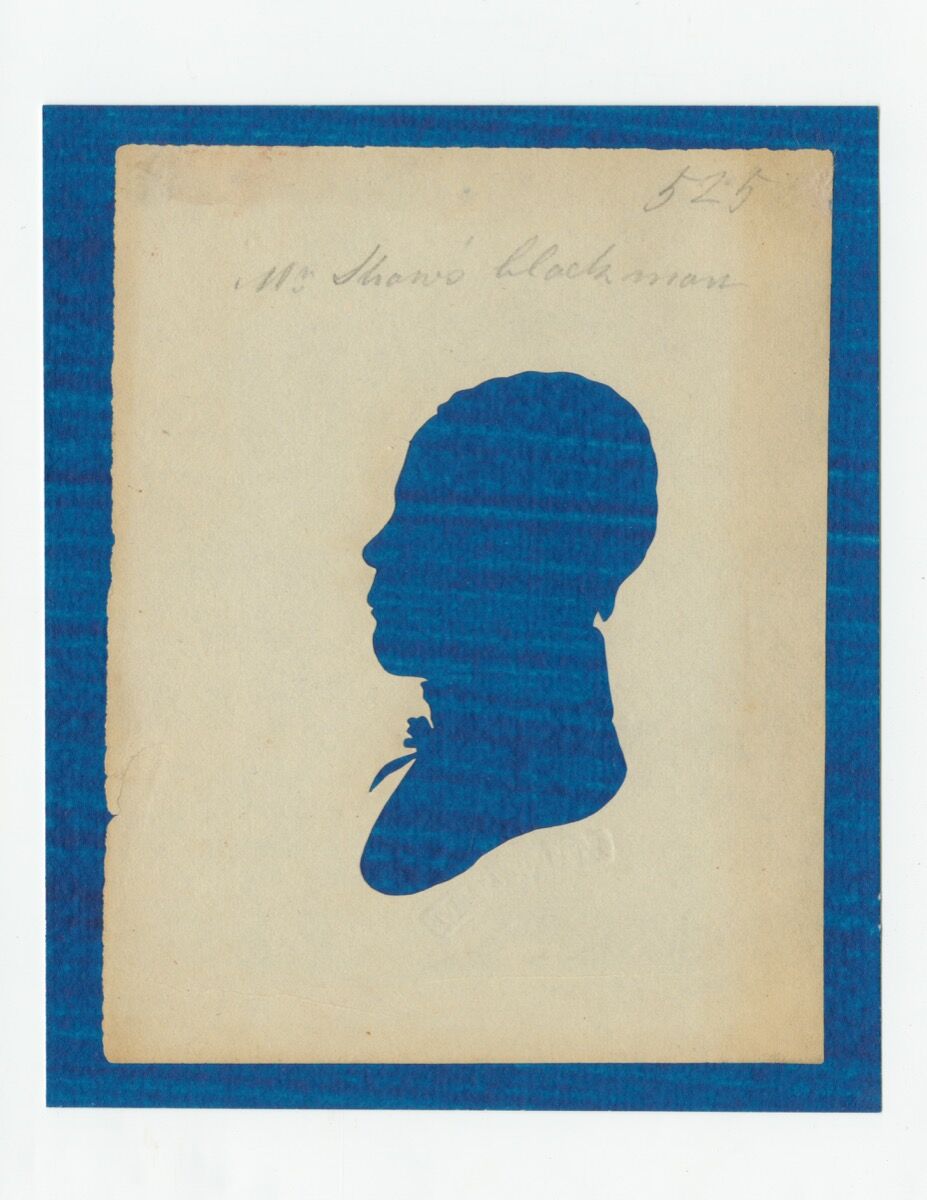 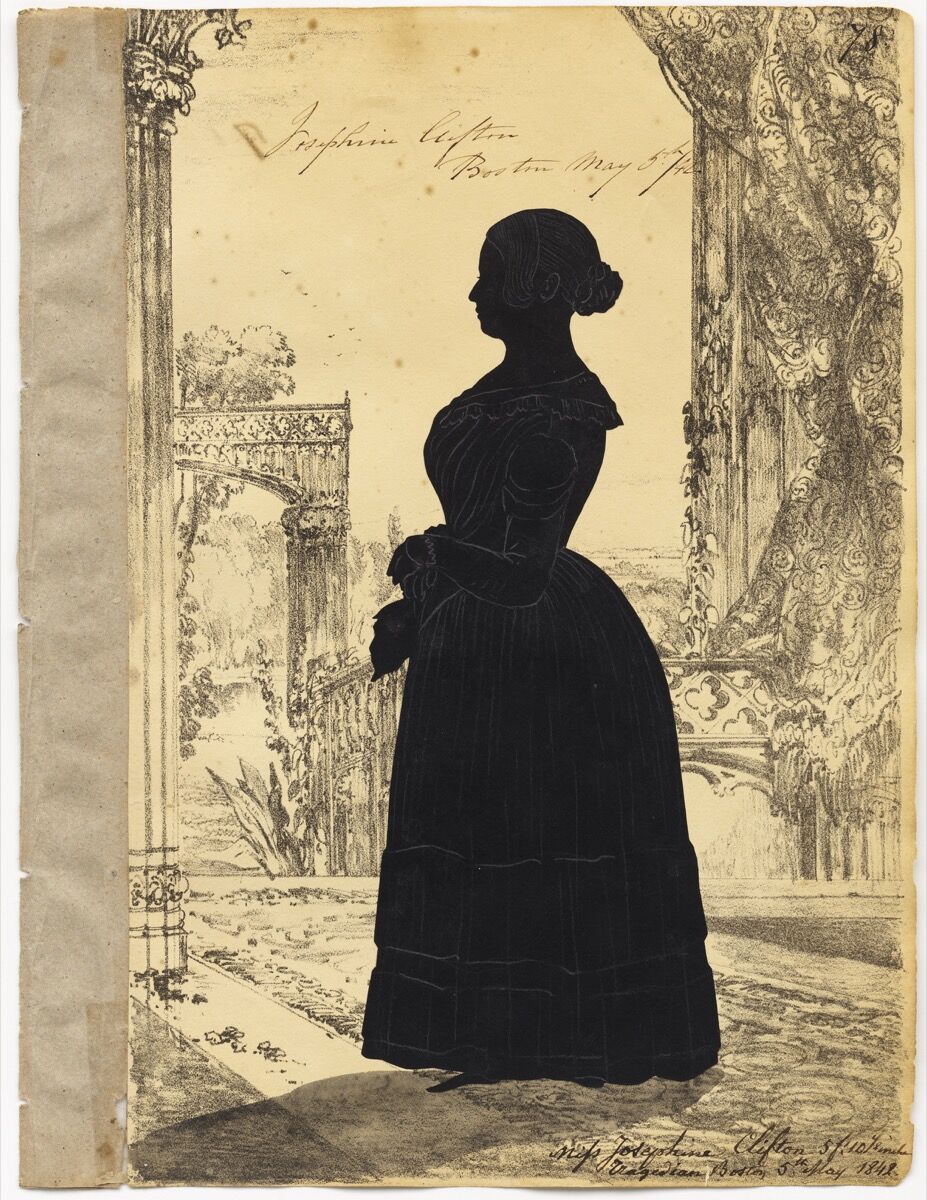 Advertisement
In maintaining a uniform two-tone format and size, silhouettes made sitters appear to be cut from the same cloth—or, at least, the same black paper. And almost everyone could buy one: For a penny, you could cut your own silhouette (with a physiognotrace), or, for a quarter, you could have your profile professionally cut and mounted in a wooden frame.
Though it was most popular in the early 19th century, scholars have traced this profile-memorializing art form back to the ancient world. Roman author Pliny the Elder once recounted how a young woman, Butades, outlined her lover’s shadow on a wall. Ancient Greek black-figure pottery showed human and animal figures in profile, contrasted against a red clay background; ancient Egyptian wall paintings showed pharaohs and gods in that (slightly awkward) side view, as well. The “head” sides of ancient Roman coins were ornamented with bust profiles of important rulers (a practice that has continued to this day).
But the earliest known paper silhouette is most likely a double portrait of British monarchs William and Mary, made by a woman named Elizabeth Rhijberg in the late 1600s. As Anne Verplanck, a silhouette scholar and professor of American studies at Penn State, explained to Artsy, silhouettes originated in Europe and were very popular there, with many surviving examples in England and France.
2 Images
View Slideshow 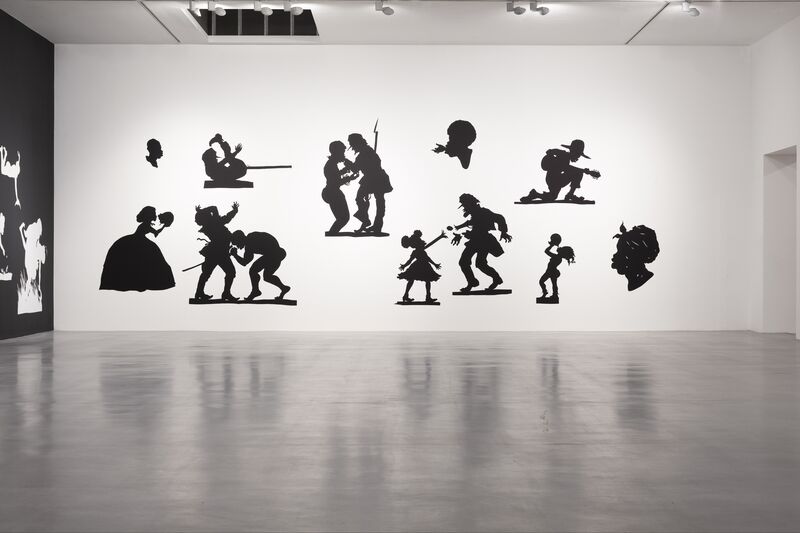 In those countries, silhouette-making was originally a salon activity for the privileged, carried out with a pair of embroidery scissors favored for their long shanks and extra-sharp points. In 1786, the invention of the physiognotrace by Frenchman Gilles-Louis Chrétien created an easier and more precise drawing of a sitter’s outline. Physiognotraces held two writing utensils together, so while one manually traced the cartography of a sitter’s shaded profile on a screen, the other automatically mapped out a miniaturized version on a piece of paper, to be cut out later.
This allowed silhouette production to venture outside the upper-class salon and into popular entertainment venues (such as taverns and bathhouses), ushering in a whole new population of silhouette cutters.
Two inspiring examples of unlikely silhouette cutters featured in “Black Out” are Moses Williams (an African-American once enslaved by painter
Charles Willson Peale
) and Martha Ann Honeywell (a woman born without hands and only three toes on one foot). The exhibition also features the work of Auguste Edouart, a highly sought-out profilist who traveled around England, France, and the United States producing thousands of full-body silhouettes, which he mounted on lithographed backgrounds.
Photography, however, changed everything. Edouart tried to compete with the medium for a while by adding hand-drawn details to his silhouettes, but to no avail. Photography and silhouettes overlapped for about 10 years until around 1850, at which point the black-and-white profiles that once hung proudly in living rooms began a slow migration into historical society museums and antique markets. 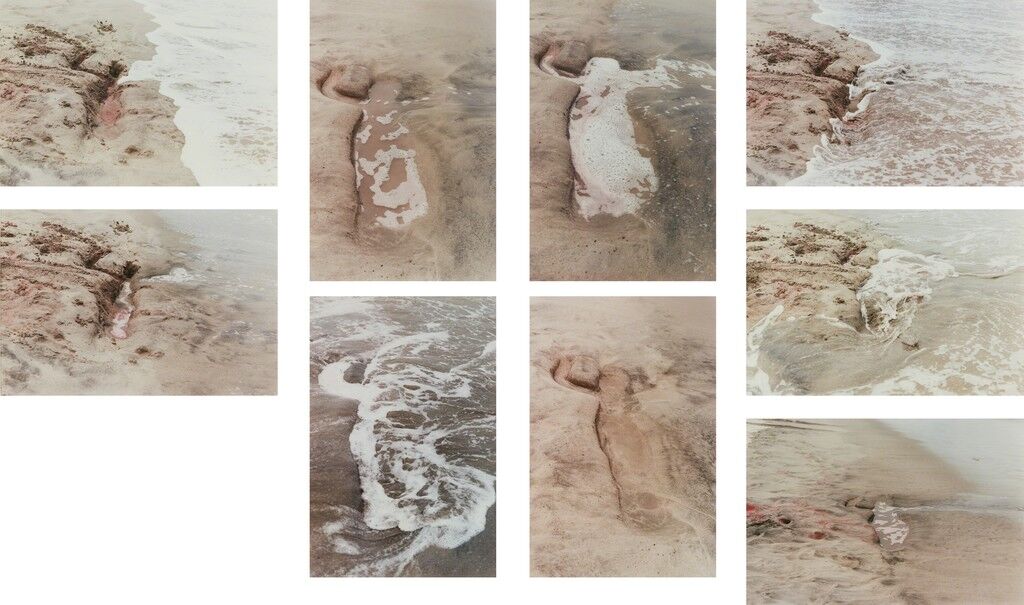 Ana Mendieta
Untitled (from the Silueta Series), 1976
Richard Saltoun
Contemporary artists, though, have continued to explore the possibilities of the empty corporal outline, such as performance artist
Ana Mendieta
, who imprinted her body in various natural environments as part of her “Silueta” series (1973–77). Contemporary artist
Kara Walker
, whose large-scale mural silhouettes are exhibited in “Black Out,” noted in a 2007 interview with The New Yorker that she “had a catharsis looking at early American varieties of silhouette cuttings,” finding themes that evolved into her own subversion of the medium, which shows the stark realities of racial stereotypes. Another contemporary artist participating in “Black Out,”
Kumi Yamashita
, uses an assemblage of letters and numbers to create a shadow profile on the gallery wall—literally illustrating how people are reduced to symbols in our digital age.
The paper silhouettes of the 19th century similarly reduced sitters to a flattened black void, with only a loosely traced outline of idiosyncratic identity. But for a time, and despite its limitations, the medium offered people—who would have otherwise faded into history—an opportunity to leave their self-fashioned, black-and-white mark.
Karen Chernick
Related Stories