Nate Freeman
Mar 2, 2018 5:50pm
On Thursday night in Los Angeles, hundreds of people crowded outside Gagosian’s Beverly Hills outpost, trying to get a peek at
Damien Hirst
’s brand new neon-gumball-toned paintings exploding with color. An hour in, the space was at capacity, with entrance available only through a backdoor that takes visitors through the guts of the gallery’s storage and then at once to the gigantic echo chamber of an atrium, where the works hung enormous and ran to the upper reaches of the walls, 15 feet above when taken at a distance. The small scooplets of thick paint splotches on canvas came together to approximate, in the paintings, a classic bucolic landscape, the sky over rolling hills.
The landscape on the ground at Gagosian was more cosmopolitan. The 76-year-old media macher Barry Diller (net worth: $3.2 billion, per Forbes) was chatting with 27-year-old Snapchat cofounder Evan Spiegel (net worth: $3.9 billion, per Forbes) while collectors such as Maja Hoffmann, Benedikt Taschen, and Bill and Maria Arena Bell swanned about. LACMA director Michael Govan was there, Jeffrey Deitch put in an appearance now that he’s once again opening a Los Angeles space, and there was Victoria Siddall, the director of Frieze Fairs, which recently announced the opening of a third fair here in Los Angeles, at Paramount Studios (Siddall said she is already struggling to deal with an onslaught of galleries fighting to get in).
There were models—Karlie Kloss, Miranda Kerr—and there were rock stars—Anthony Kiedis of the Red Hot Chili Peppers—and there was Hans Zimmer, the composer guy who did the score for the Pirates of the Caribbean movies. Artists were there, too, in support of one of their own brethren who had long ago made himself into into a global brand:
Carol Bove
,
Jordan Wolfson
,
Jonas Wood
,
Jennifer Guidi
,
Alex Israel
, and
Mary Weatherford
, who rather admired the muscular touch on the canvas, the way the paint was whipped up in spots like a cowlick haircut.
“It’s very difficult to do that, to make it stay like that, but Damien is the master,” she said. 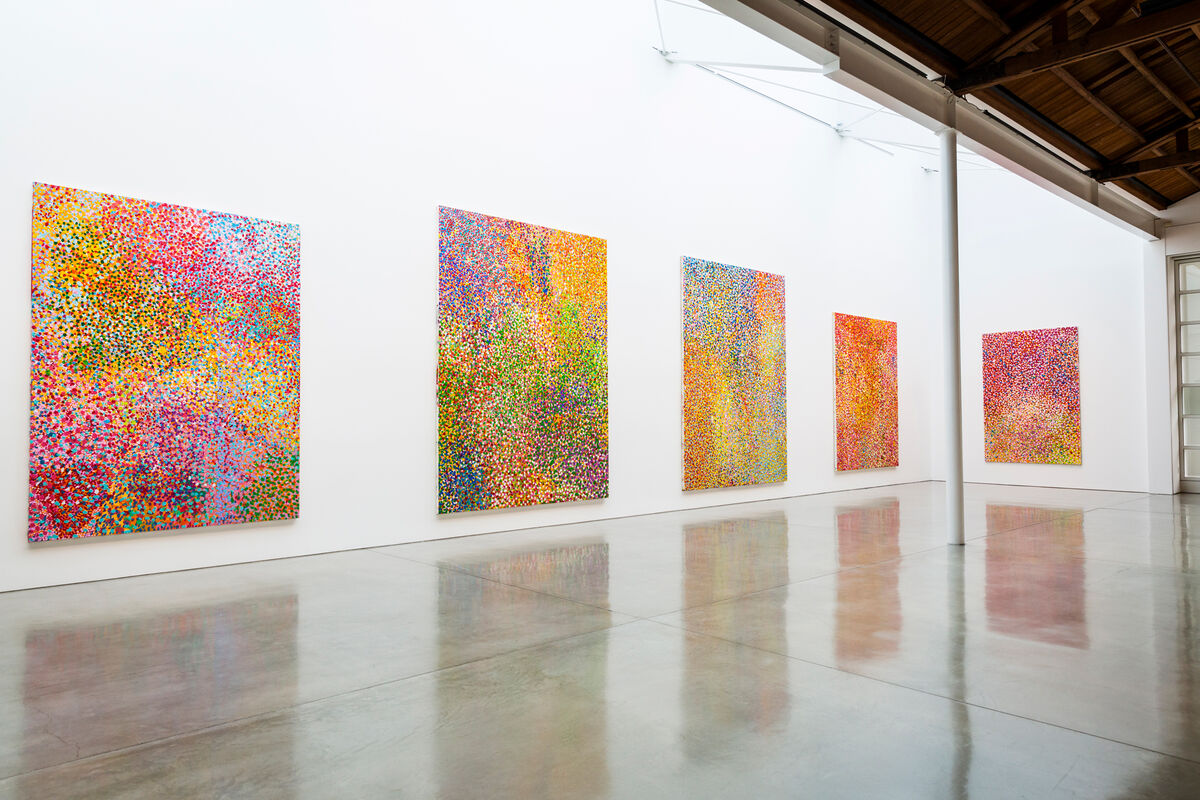 Advertisement
Because that’s the thing with this series, which Hirst calls “The Veil Paintings”: they were actually made by Damien Hirst. This is the man who famously cranked out a few dozen of his celebrated spot paintings himself… and then let a team of studio assistants make the other 1,375 or so currently in existence.
Now, as video evidence shows and as his studio confirms, he has inserted himself back into the studio, and done all 24 of the paintings himself. It’s not the first time Hirst has painted an entire series himself, but it’s perhaps the first time he’s fully succeeded in front of the easel—when his last painting show opened, in 2012, the Guardian critic Jonathan Jones savaged his show at White Cube in London, saying, “Hirst is not a painter at all in any meaningful artistic way (no, not even ironically).”
At Gagosian, he seems to have more of a hit. By the time the lingering crowd finally left the gallery nearly an hour after the official closing time, all but three of the 24 works on view had been sold in just a matter of days, at a price point that ranged from $400,000 for smaller works also included in the show, to $1.6 million for the towering ones, said multiple art advisors who had access to prices and availability. And by the time of the dinner afterward at Mr. Chow, the gallery confirmed, all had sold.
But where was Damien? 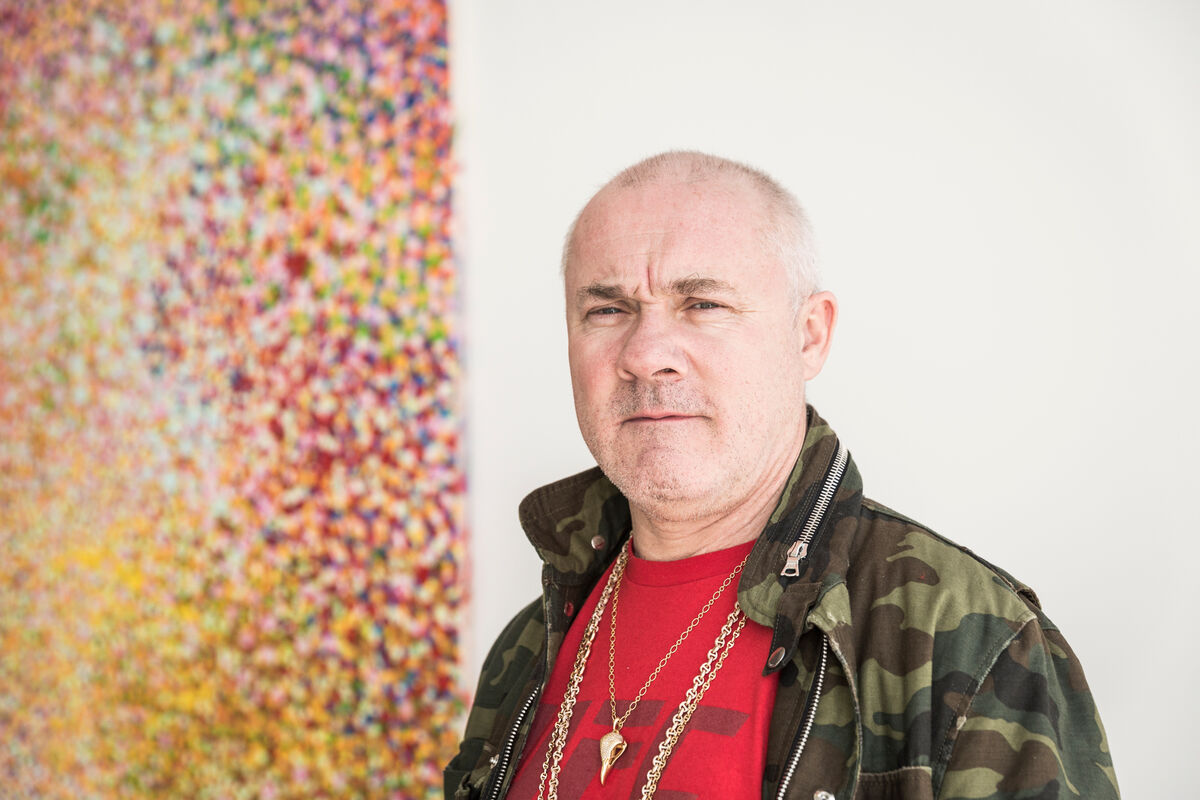 Portrait of Damien Hirst at Gagosian, Los Angeles by Emily Berl for Artsy.

Nearly a year ago, a show opened in Venice that took Hirst and his studio, which is called simply “Science,” approximately one decade and $65 million to create: “Treasures from the Wreck of the Unbelievable,” a mind-altering spectacle that placed 189 objects, some 60 feet tall, across the two palazzos owned by French billionaire François Pinault, a longtime fan of his work who owns quite a lot of it, and has the funds to bankroll his most ambitious fever dreams. The reviews ranged from rapturous to extremely unfavorable, but weighed more heavily toward the unfavorable.
“Treasures from the Wreck of the Unbelievable is a spectacular, bloated folly,” wrote Alastair Sooke in the Telegraph, “an enormity that may prove the shipwreck of Hirst’s career.”
“Damien Hirst’s doubleheader in Venice is undoubtedly one of the worst exhibitions of contemporary art staged in the past decade,” wrote Andrew Russeth in ARTnews.
But something interesting happened: Collectors bought up the work in droves. The dirty little secret of the Venice Biennale is that all of it is for sale. Last year, by the time of the May opening of the Biennale, 60 to 70 percent of the work had been sold, with some going to the Mugrabi family, the Nahmad family, and the Chinese billionaire Qiao Zhibing.
Hirst himself is an extremely wealthy art collector—he owns work by
Jeff Koons
,
Andy Warhol
,
Richard Prince
,
Sarah Lucas
, and many others—which is perhaps why extremely wealthy art collectors liked the show much more than critics.
“I want to have art where if people see it, they go ‘Wow,’” the Canadian collector Francois Odermatt, who bought a work by Hirst for about $2 million while in Venice, said last May in an interview in Venice.
In November, Hirst told David Colman of New York magazine in a rare interview that “Treasures from the Wreck of the Unbelievable” had at that point raked in $330 million.
Gagosian, which Hirst rejoined in 2016 after parting ways in 2012, is no doubt helping spur on the artist’s market. For Frieze New York that year, the gallery brought a Hirst greatest hits smorgasbord to Randall’s Island, selling work such as his spin paintings and his pickled sheep in formaldehyde for up to $4 million. A show at Gagosian Hong Kong was more vintage Hirst, works from the early 1990s—cow’s head in blood, more dead animals in formaldehyde, all that good stuff.
But for the show at Gagosian’s L.A. space, held during the city’s crazed Oscar Weekend, Hirst decided to bring new work, and to shift his practice radically. In January, he posted to his Instagram a video of something you would not expect Damien Hirst to do. Wearing an almost comically paint-stained black t-shirt, Hirst stood before a massive canvas pockmarked with mini poppies of alarming color—bubblegum pink, powdered sage, lemondrop, stop-sign red—dipped a paintbrush in paint, and dabbed it on a canvas.
“They’re like big abstract Bonnard paintings,” Hirst wrote in the Instagram post, referring to French
Post-Impressionist
Pierre Bonnard
. “I’ve been playing with the scale and the big ones feel perfect. how can you not love colour? Sunlight on flowers, fuck everything else.”
He did this by focusing on studio practice in the classic sense, standing in front of a canvas on an easel in a studio, as the Post-Impressionists would have used—a far cry from the studio practice that produced the nearly 1,000 objects that made up the Venice extravaganza.
The gesture of being physically in a studio seems almost performative, since he performed the act of painting several times in the last month on Instagram, where he has over 340,000 followers.
“I’ve spent a year working intensely in the studio getting covered in paint and making the whole series,” Hirst said in another post. “It’s a new way of working for me because in the past I’d make one or two paintings and then I go back and make a few more here and there when I felt like it.”
The artist who once pushed back hard when asked why he puts his signature on work that was actually made by his assistants is now loudly broadcasting that he’s making the work himself. In one video, he quietly applies creamsicle-colored paint to a canvas, which wobbles slightly as he twists it onto the surface. In another, he stands three paces back, dips a long brush in a vat, winds up, and thwocks the pigment onto the easel with a slap.
Advertisement 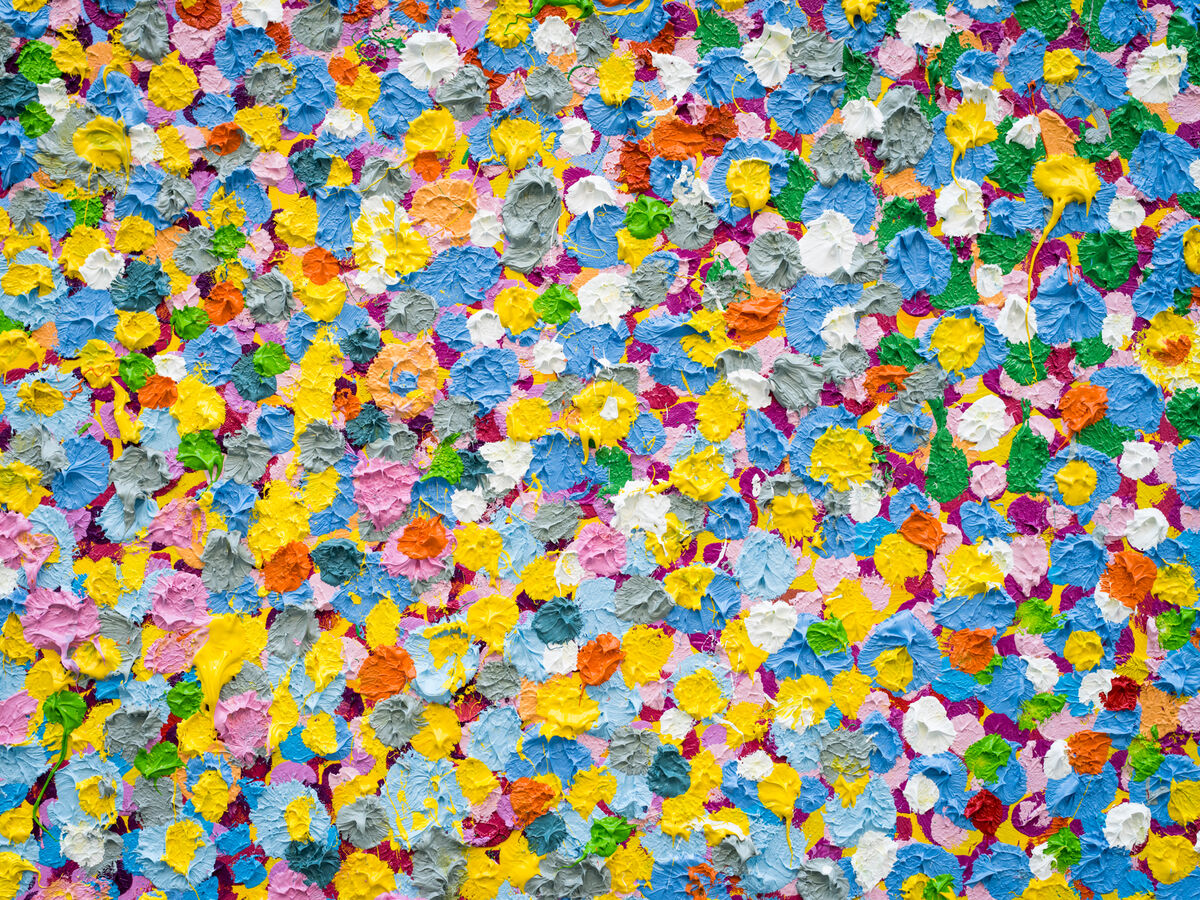 Detail of a painting by Damien Hirst in “The Veil Paintings” at Gagosian, Los Angeles. Photo by Emily Berl for Artsy.

Having this thickness, this viscosity on the canvas, is almost a Proustian moment for Hirst, as he explained in another Instagram post.
“The texture of these paintings reminds me of some sweets I used to get from my gran as a kid,” he wrote. “They were in a bag like crisps and were a dollop of brightly coloured icing sugar squeezed from an icing bag on a small round tasteless biscuit base.”
Reading these descriptions, it’s clear Hirst wants everyone to know that his hand made it, that he’s making something personal, and that this application of paint on canvas goes beyond questions of authorship and affects the actual composition of the work. Walking into Gagosian, one gets the momentousness, that Hirstean bigness, that’s both loved and reviled. Then up close, there are smaller moments where the cold, mechanical spot paintings of the late aughts get exploded, and the grids melt into lime green streams of goo and sticky-looking blots of tar. For the Hirst aficionado, there has to be something irresistible about looking at this rich impasto up close and knowing that each and every splatter and curlicue was crafted by the man’s hand.
“In the Veil Paintings I just thought fuck it I need to go back to my original feelings about colour and forget the grid and to hell with order,” Hirst wrote in another post on Instagram. “I need to celebrate colour and chaos in a big way.” 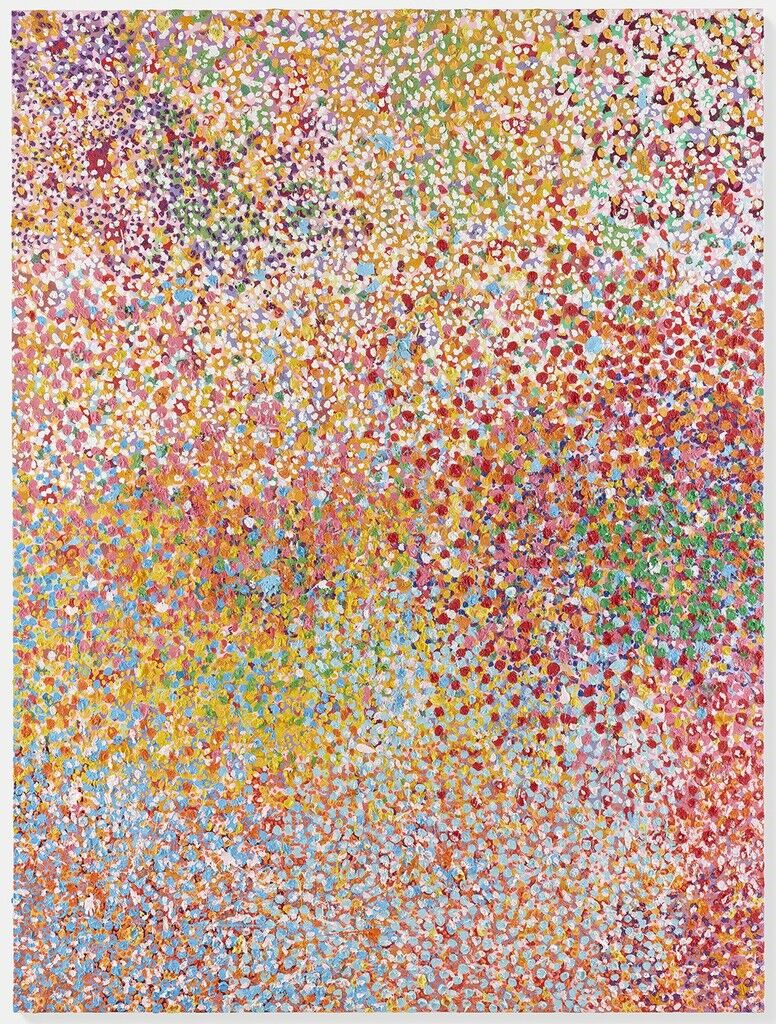 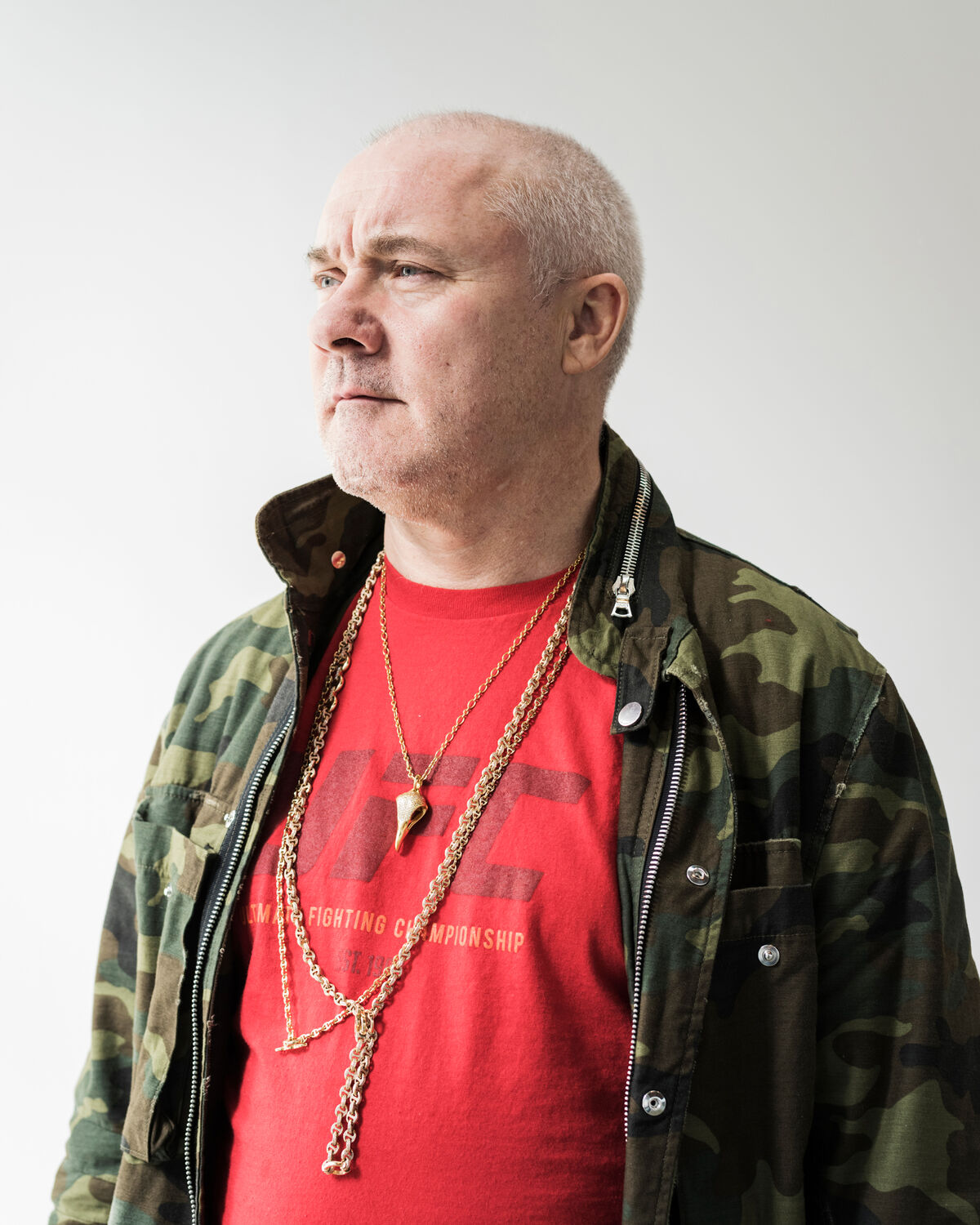 Portrait of Damien Hirst by Emily Berl for Artsy.

A representative at his holding company, Science Ltd, confirmed that Hirst made all the work by himself, sans assistants, in his London studio. And perhaps that’s why this new work, while still gigantic in scale, feels more intimate, closer to the artist than the mass-produced spot paintings, or the death-obsessed science experiments, or the diamond-laden statements on wealth. A director at the gallery said that collectors wanted new fresh work by brand-name artists, and knowing that the artist made the work himself was a selling point.
I had been planning on buttonholing Hirst at some point in the night to ask a question or two, after weeks of interview requests that were volleyed between the artist’s studio, the artist’s liaison at Gagosian, the gallery’s communications representatives, and an outside public relations team that handles the events surrounding this particular opening, finally resulted in polite denial from the press-shy Hirst. Perhaps it was appropriate, then, that for most of the evening the artist was nowhere to be seen.
During a post-opening dinner hosted by Larry Gagosian at Mr. Chow down the street, I went outside for some air, and saw a man bound out of the restaurant with a few young Englishmen in tow. He was wearing a grey suit and gold chains, and after pausing a second by the sidewalk, peering down the streets of Beverly Hills, the man beckoned the young men to come along, and off they went, following Damien Hirst.
Nate Freeman
Header image: Portrait of Damien Hirst at Gagosian, Los Angeles by Emily Berl for Artsy.
Further reading in Art Market