Dana Schutz, Beat Out the Sun, 2018. Courtesy of the artist and Petzel, New York. In
Dana Schutz
’s latest paintings, wretched and defiant humans struggle with themselves and with one another. In Mountain Group (2018), a marooned tangle of cartoonish figures clamor for space on a mountaintop while birds—the innocent victims of our man-made ecological crisis?—cough up blood or shit. Presenter (2018) shows a woman on a stage with underwear around her ankles, revealing prepubescent, hairless genitalia; meanwhile, a swollen, elephantine hand holds her mouth shut. She is isolated, exposed, coming to terms with herself in a very public context. In Treadmill (2018), a fish-headed gym runner is suspended in existential flight, existing somewhere between primordial past and dystopian future. As Katy Siegel elucidated in an earlier essay about Schutz’s work, the artist often suggests a universe at “the beginning or the end.”
The latter two paintings, in particular, are fantastically, characteristically weird, and yet powerfully relatable. One can feel the humiliation, the body-curdling dread of exposure combined with the inability to speak, or the runner’s desire to gin up endorphins—the compulsion to tear through consciousness and momentarily depart from oneself. Even though social dynamics, grotesqueries, and apocalyptic scenes have long been present in Schutz’s practice, it’s difficult not to read the painter’s recent experiences into these works—being in the spotlight but feeling unable to speak; the impulse to outrun one’s critics. Readers are unlikely to need reminding of the controversy surrounding Open Casket (2016), Schutz’s painting of Emmett Till’s dead body that was exhibited at the 2017 Whitney Biennial. These new canvases, on view at Petzel Gallery in the artist’s first solo exhibition in the city since the biennial, underline how unusual and misguided Open Casket was in the wider context of Schutz’s work.
“I don’t paint from photographs or from life,” she once told curator Helaine Posner. Instead, Schutz said, she paints imaginary narratives and experiences “that are difficult to visualize”—like the physical feeling of a sneeze. Schutz has riffed on American politics and historical figures before, placing the Bush administration at the beach (Party, 2004) and Michael Jackson on a surgeon’s table (The Autopsy of Michael Jackson, 2005). But these were imaginary scenarios, even if the latter painting is still fraught in its own way with racial issues. Appropriating and recreating an unspeakably painful and real image and event, as Schutz attempted with Open Casket, is another act altogether. Needless to say, the artist is much, much better in the universe of her imagination. Dana Schutz, The Wanderer, 2018. Courtesy of the artist and Petzel, New York.

Advertisement
While the works at Petzel suggest figures in crisis and individuals alienated from one another, there are also pairs and groups that are mordantly united. Strangers (2018) depicts two beastly, aging, and primitive men in an ambiguous clutch, surrounded by a haunting landscape of jawbones. Washing Monsters (2018) shows a gaunt and terror-struck suited Wall Street everyman reluctantly wrapped around a skeletal creature that could, presumably, symbolize death. The man soaps down his own dreadful alter ego.
The scene from Washing Monsters reappears in the show in the form of a sculpture, among a handful of other bronze works—Schutz’s first experimentation with the medium. The effect of her sculptures is much softer than her paintings—which, in the past, I have sometimes found too ferociously angular, shallow in space, and cruel in their rendering of humans, leaving no way in for viewers. The pocked head of Smoker (2018) emerges from a mound of bronze and puffs out a small cloud of smoke; Buddy (2018) is a sweet one-armed creature whose head teeters precipitously from one side of its neck. But painting is still by far Schutz’s stronger suit, the place where her surreal and monstrous images, figures, and scenarios come to life with remarkable resolution. The best works here are those that are compositionally epic—like The Wanderer (2018), which shows a deviant man-child in a loincloth, with what appears to be a pedometer strapped to his ankle. A fleet of alarmed crabs, their pincers raised in protest, scurry about his feet as he forges a path through a dark landscape. Perhaps the strongest work here, though, is The Visible World (2018), in which a naked woman is stretched over what’s either a severed tree trunk or a rock stranded at sea. She reaches one hand down into the water, and the other up toward the apocalyptic clouds overhead. An ominous stork has landed by her side carrying not a baby, but seemingly a bundle of human eggs. The figure appears to be Schutz herself, unmoored and alone, searching for some stable ground. There is something of a survival narrative here, as with most of the paintings in this exhibition: individuals struggling not only with themselves and one another, but also with an environment that is increasingly hostile to human life.
Ecological catastrophe may pervade Schutz’s imagery, but these are also psychic spaces, manifestations of the artist reaching out to touch what is materially and emotionally available to her. Schutz excels when she’s aware of those limits, less so when she wavers from that inherently unstable terrain. Within this show, she largely keeps to that very personal ground—and throws in references to the act of painting as a kind of emotional survival. “For me at least, that feels like the only way to get through something,” she told the New York Times. We see evidence of this spirit of perseverance often in the new work. Despite the feverish throngs of Mountain Group, a girl at the bottom focuses on painting a landscape. In Painting in an Earthquake, a woman with her back turned to us is engaged in a multi-limbed attempt to create imagery while the entire room crumbles around her.
Even the exhibition’s title, “Imagine Me and You,” nods to the aspirational and fraught exercise of understanding one another. It also acknowledges, perhaps, that those attempts can fail—sometimes spectacularly—but that the rocky journey is worth the effort.
Tess Thackara
Related Stories 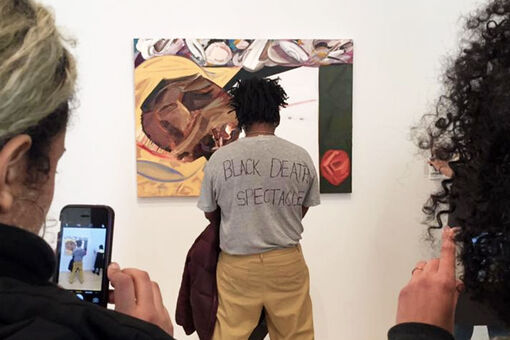