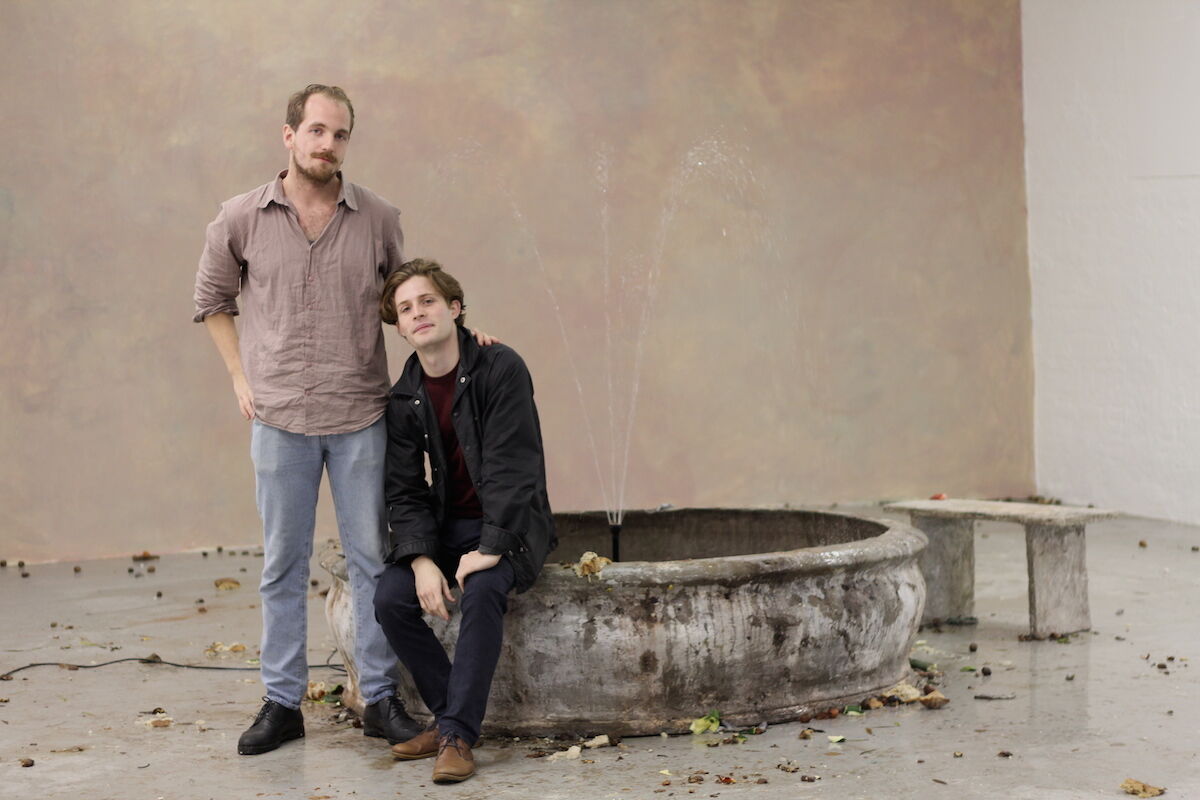 “Mathias is more hands-on, and Mathias is more thoughtful. Or is it the other way around?” There’s a sly wit—not to mention serious philosophical underpinnings—to the experimental work of Mathias & Mathias, a Copenhagen-based artist group currently showing their new exhibition, “Dumplings,” at Last Resort.  The sculptures on view, which combine elegant figuration with the duo’s characteristic playfulness, take center stage. Made from iron rods, their looping outlines resemble abstracted figures affixed with loaves of bread where muscles or bulges might be, drawing connections between art-making, labor, and consumption. “You are what you eat; as you are what you paint,” write the duo, with one of the tongue-in-cheek aphorisms that often bolster their work. “Becoming your subject at hand; You know, suddenly I find myself being a tool, a vegetable, etc., etc.”
As “Dumplings” draws to a close, we caught up with the artists, known to some as Mathias Toubro and Mathias Dyhr, about using food as a metaphor, the artistic tastes of millennials, and their ongoing fascination with the lifestyle and mannerisms of the modern dandy. Artsy: You've engaged with the themes of food and drink—of satiation, appetite and intoxication—in the past. What is the significance of “Dumplings,” the title of your new show
Mathias & Mathias: The title “Dumplings” works on more than one level. One is a pun on the word itself—“dumb.” In our discussion leading up to making these works, we reflected on the dumbing aspects of manual artistic labor. If you paint vegetables for too long, we thought, you become a vegetable yourself.
When discussing food themes, we always return to the ideas of eclecticism, of use and reuse, of making things new while constantly keeping tradition in mind. For example, in our 2014 show “Ribollita,” named after a hearty Tuscan peasant soup consisting of the previous day’s leftovers (primarily stale bread), the central object was a large Baroque-style concrete fountain filled with water, bread, nuts, and fruits from the garden where we constructed the fountain. Also hidden in the muddy water were sculptures from a former exhibition. The fountain was functioning normally, but the water was shooting slightly out of bounds: it was not following its ordinary task, it was not a closed system, but rather something that consumed itself and it's raison d'être.
Food and cooking serve as a an allegory that is both bodily and abject. A pot can easily be a fountain. Bread could be, at certain times, for certain people, a symbol of flesh. When working with food themes, we find that there is something deeply humorous at stake—and then sometimes something urgent and troubling. Advertisement
Artsy: You've exhibited work in some unconventional spaces. For you, what is the role of art in a private versus public space?
M & M: When creating a new exhibition, the discussion of the overall viewer experience is often quite central. We consider accessibility, duration, and the style of installation. Online image stream has rendered physical encounters almost redundant. But on the other hand, the specificity of exhibitions in physical spaces seem even more important now. In our generation—that of millennials—this seems to be an important theme. Our generation isn’t living online, nor do we wish to do so. We’re just processing information quickly and navigating more than one place at once. In comparison with the exhibitions we’ve done in public spaces and in private homes, “Dumplings” conforms a lot more to the traditional exhibition experience. But we enjoy that, too.
Artsy:  The written word seems to play an important role in your work. Do you consider the texts you write to be essential components of the work itself?
M & M: We use text as a tool to unfold our work, and as a tool to tighten it up. Text is just as important as physical stuff in the exhibitions. We also see text as an effective way to position ourselves in relation to the work we have made. We can role-play—act dumb, for instance, or speak the vernacular of dandies. When you work as a team under a common name, you’ve already let go, at least slightly, of yourself as the subject, and the fictions and voices of the text start morphing into a third element or character. 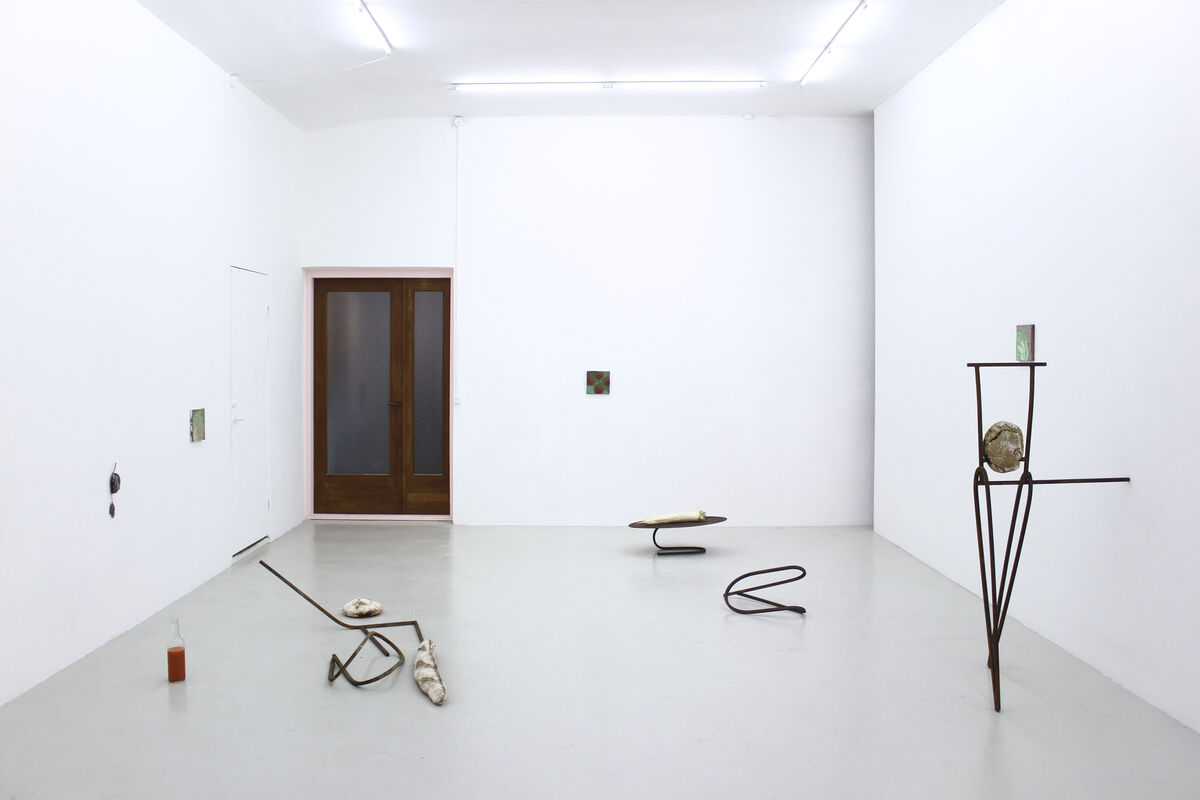 Artsy: Describe your collaborative process. How long have you been working together? How do you conceive of an idea and realize it? Do you play complementary roles in this process?
M & M: We’ve been working together since 2012, starting with the exhibition “Fine and Dandy.” It was a decorative installation consisting of brightly colored walls with palm trees, festoon stuccos, and glowing makeup mirror frames as door entrances. That was our first attempt to enter the mind of a fictional figure of our own choice—the dandy and his mannerisms.
Since we share a studio, we’re in almost daily contact. That means we can easily address each other regarding new ideas, things we have seen or read; we’ve worked out a common language. Mathias is more hands-on, and Mathias is more thoughtful. Or is it the other way around? Who did what is not a secret, but it’s also not of great importance. Mathias & Mathias is an umbrella.
—Bridget Gleeson
“Dumplings” is on view at Last Resort, Copenhagen, Nov. 28th, 2015 – Jan. 16th, 2016.
Follow Last Resort on Artsy.
Related Stories