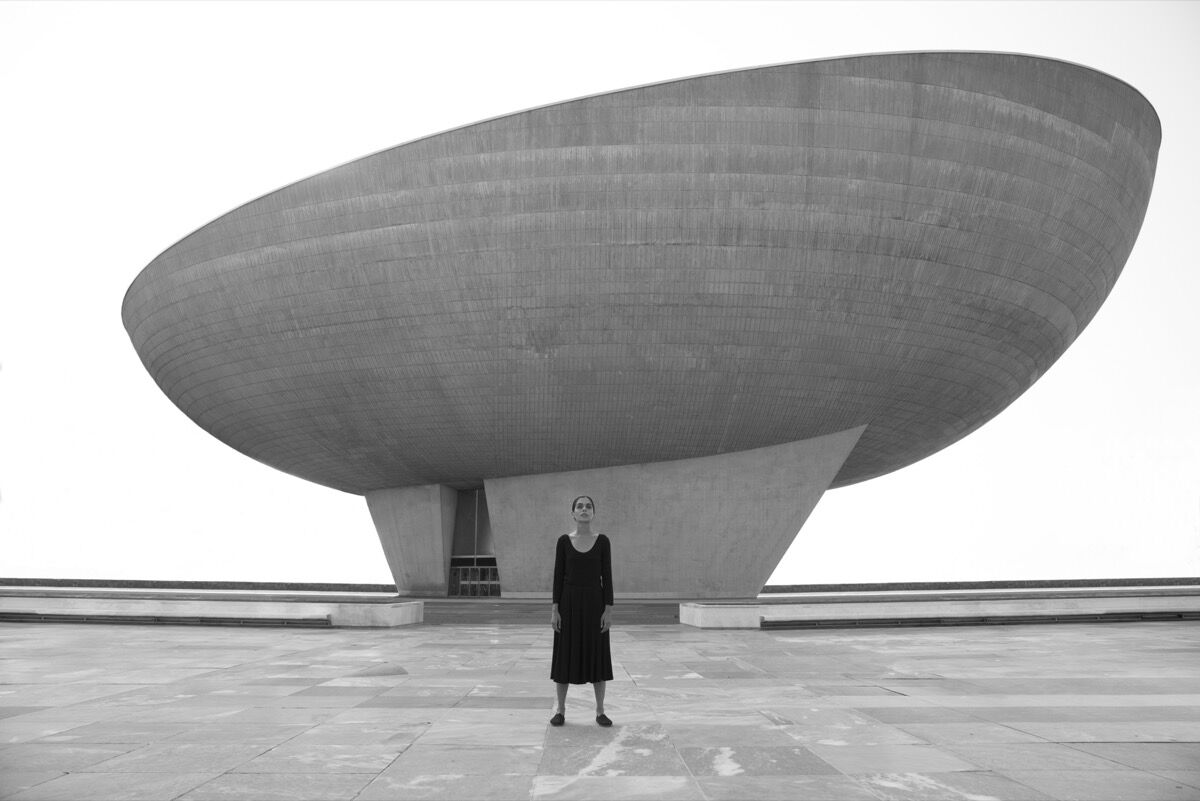 Shirin Neshat, still from Roja (2016). Image courtesy of the artist and Goodman Gallery.

Shirin Neshat
doesn’t make a lot of work. Her endeavors with film are, in her words, “a real test of endurance.” These projects can take years to evolve, she tells me. Neshat has recently returned from a preparatory trip to Morocco for her next feature, which will finally come to fruition after six years of planning (shooting begins in the fall). And while for her 2009 film, an adaptation of Shahrnush Parsipur’s novella, Women Without Men, Neshat constructed Tehran in Casablanca, for this forthcoming one, she’ll return to the city to build Cairo.
A semi-autobiographical “film within a film,” the piece is about an Iranian filmmaker making a biopic about the iconic Egyptian singer Umm Kulthum. “We started out doing a biopic but it seemed too boring; we were struggling so much for an angle, so we decided the film should tell my story, my obsession, how I see her,” Neshat explains. “But it is also about women in the Middle East who choose to be artists, to build their life around a career—and the price they have to pay in order to succeed; it is about an artist looking for answers, and looking for herself.”
Neshat is speaking from her studio in New York, where she has been living in self-imposed exile from her native Iran since 1979. This film in the pipeline is characteristic of what Neshat has become widely known for: The convergence of the psychological and political in an individual woman. These interests also have a prominent place in two new video installations, to be presented at Goodman Gallery, Johannesburg, later this month. It will be the artist’s first solo show in Africa.

Shirin Neshat, stills from Sara (2016). Images courtesy of the artist and Goodman Gallery.

I was among the first to preview these two new works, Sara and Roja (both 2016), which complete a trilogy, titled “Dreamers.” The first of the series was Neshat’s 2013 video Illusions and Mirrors, a short commissioned by Dior and starring Natalie Portman (factors that eclipsed critical review of the artwork at the time). Perhaps as a result of the response, neither of the female leads in Sara or Roja—young women she met through the Iranian community in New York—had ever acted before.
Shot sumptuously in black and white, the new videos have a hallucinatory atmosphere that’s easy to feel but hard to define; the physical and emotional landscapes are recognizable yet impossible to place. Neshat explains that after working on a full-length, narrative feature film, it was challenging to return to video installations. “What I missed was the ritualistic, and allegorical nature of those old video installations, which is nearly impossible to replicate in conventional cinema,” Neshat explains, referring to her earlier works. “Since I was working with Natalie Portman, I decided I had to make something that was cinematic, and required a performance even if without the use of language,” she says of Illusions and Mirrors. “At the end, the piece became very psychological as the character stood in between the states of madness and sanity. In my past video installations people were devoid of any character, they were approached more less sculpturally.”
“With Natalie, her professionalism and experience as an actress was tremendous. I almost didn’t have to explain anything, she was so quick to understand what I was looking for,” Neshat recalls. “As it was a great pleasure for me to work with someone as Natalie’s caliber, I think for Natalie, who works on big Hollywood productions, it was a fun experiment to work on an experimental, abstract video piece.”
It was a leap of faith to work with non-actors in the new films, but it paid off. Both women give sublime performances. “I had this intuition that there was something very special about them,” Neshat says. Sara is like a female imagining of Dante, wandering lost and wide-eyed through a dark forest; while Roja (physically resembling the artist herself) is both strong and sentimental. “The advantage of working with people who have never acted before is that they take the role very seriously and give it their hundred percent,” Neshat explains. 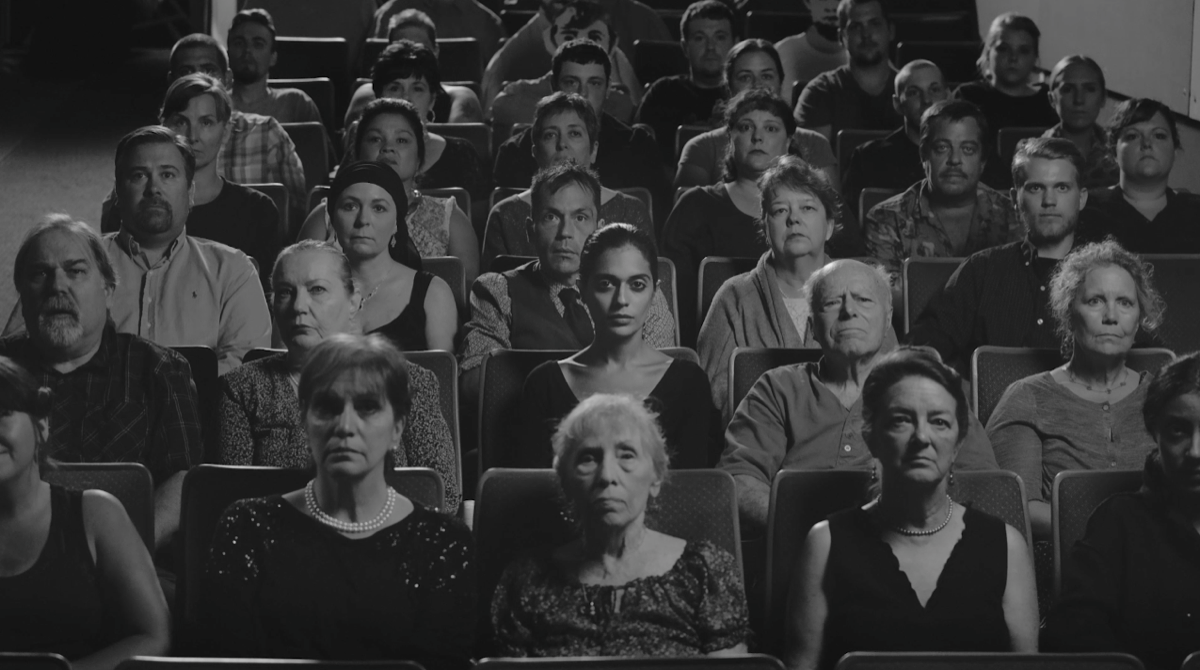 Shirin Neshat, still from Roja (2016). Image courtesy of the artist and Goodman Gallery.

Advertisement
The new videos are a distinct departure from notable works such as Rapture or Turbulence, plunging more inquiringly into her protagonists’ inner worlds. Neshat also researched the techniques of avant-garde filmmakers such as Maya Deren,
Man Ray
, and Luis Buñuel. She employed some of their lo-fi methods to create the works’ surrealist effects, such as placing glass over the camera lens. Adding to the chimerical strangeness, Roja also uses a cast of non-professional actors, local people from upstate New York, where the film was made. The abstruse narrative is based on a symbolic, recurring dream the artist had. “I remember exiting a magnificent modern building in the West; then as I looked out I saw my own mother running toward me, from a far distance in a desert landscape,” she says, recalling the dream. “In an impulse I started to run toward her. The encounter of running toward each other seemed to take forever, and in slow motion, but as we got closer I realized that she was not my mother but a monster.”
“Dreams are very powerful. I think it’s only in the state of dreams that we are truly free and naked. But there is always a reference to reality, such as familiar locations and people, but the logic of dream is fragmentation, nothing quite makes sense,” Neshat emphasizes. “In dreams we are submerged in the darkest part of our souls, where we face who we are, what we are afraid of, and all that we avoid in reality…. Roja is ultimately about the notion of ‘displacement,’ the fear of the ‘stranger’ or the ‘strange land’; the desire for a ‘mother’ role or ‘mother land.’”
Neshat has never tried to conceal the impact of her personal experiences on her art. Her art is a search for a voice beyond time and place; a means to create a space for a story that doesn’t exist in the contemporary conscience, one that is feminine, middle-eastern, and complex.
Charlotte Jansen