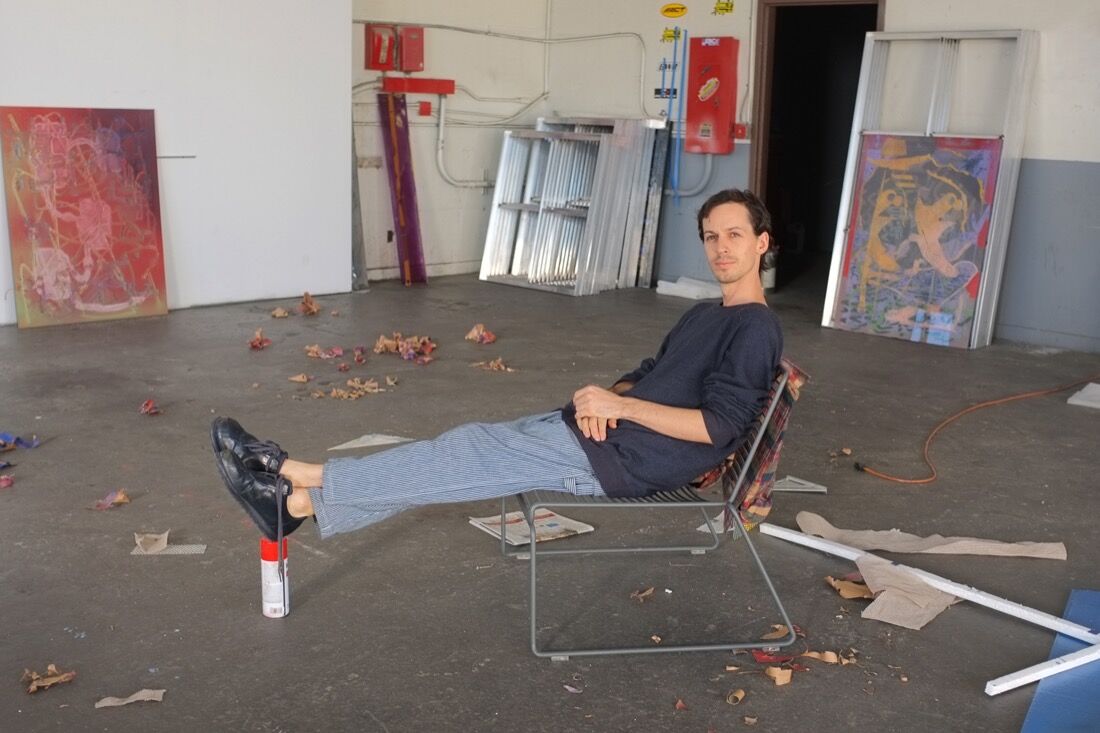 Darren Goins in his studio, photo by Andrea Brown.

To create his new body of work,
Darren Goins
works blindly, more or less. Each of his new paintings begins as a clear acrylic panel completely covered by the manufacturer’s masking tape. Using a 3-D carver known as a CNC machine, Goins cuts through the tape to create a design on one side, and then paints over that surface. He then flips the panel around and removes the tape from the pristine side, which is what the viewer sees as the front of the painting. It’s tricky to the eye, working a bit like a bas relief in reverse, as if the painting is somehow bubbling up from behind the acrylic panel.
The North Carolina–born, Los Angeles–based artist is taking me around his warehouse-like studio, a former truck repair shop in the industrial city of Vernon, south of downtown L.A. Semis rumble by, sending gentle vibrations through the building. Several works in progress are laid out on the ground in the largely bare studio. Goins has just shipped off a series of paintings, along with three sculptures, to Hezi Cohen Gallery in Tel Aviv, Israel, for “Command Shift 4,” his first solo exhibition with the gallery. “I’m practicing with a few different processes,” he says about his bubble textured, colorful paintings. 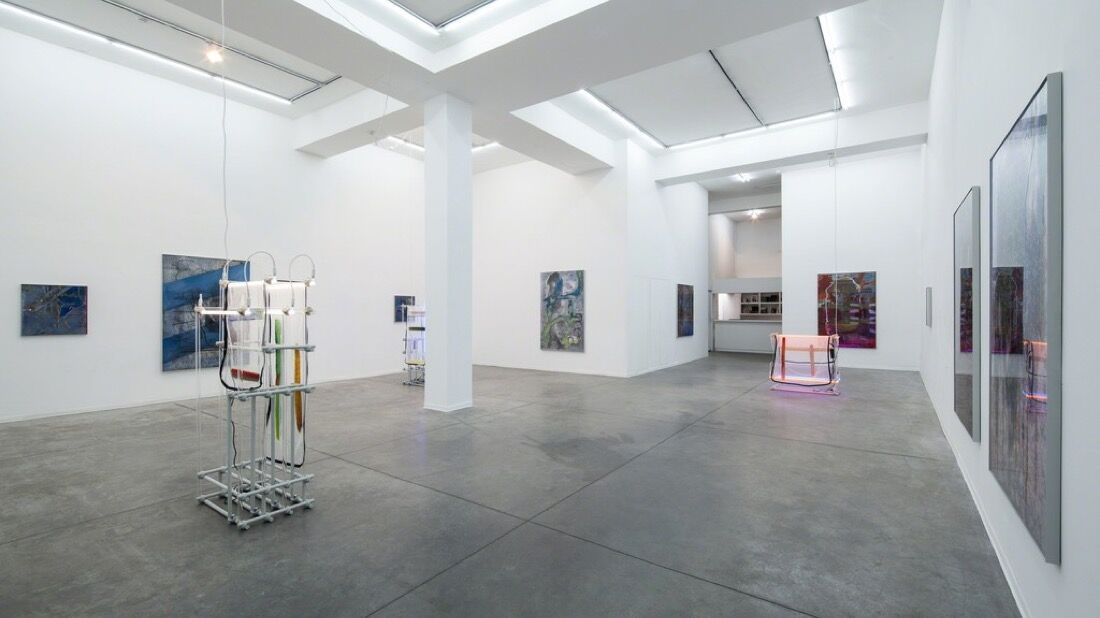 “I like to have a lot of accidents on the back of the painting. The accidents tend to be the most exciting on the other side,” says Goins, who also experiments with the textures created by the addition of pebbles, found in Joshua Tree (where he used to live), as well as watercolor.  “As a painter, I’m working backwards. For me, the first mark is the most obvious and then the last mark I make on a painting will probably be barely even seen. I have no idea what’s going to happen on the other side.”
Goins recently moved to Vernon (the city that inspired the famously corrupt and dystopian municipality of Vinci in the last season of True Detective) from Joshua Tree where he worked under
Alma Allen
, who was preparing for the 2014 Whitney Biennial. Allen does most of his sculpting on a robotic CNC robot, and Goins quickly picked up the basics of working with the 3-D carver, which has an interface Goins compares to Microsoft Paint. He purchased his own machine, which he uses by inputting images that are then etched into a surface.

Advertisement
“There’s a wide variety of source materials,” he says. “I came across an art history book at a friend’s house, and it had all these etchings from the 16th century, and I just started taking pictures of details on my camera phone—just tiny sections. One image I extracted showed a Pagan ritual. I take stuff from
Philip Guston
and
Sigmar Polke
. Sometimes I do a Google Image Search of ‘hat,’ for instance. When you type in ‘hat’ on Google, you get all these different profiles.” He then hand draws the image using Microsoft Paint or Photoshop, and then inputs those pictures into the CNC machine, which then carves them.
It was the Microsoft Paint program that inspired Goins to shift from a photo-based practice to tech-based painting and sculpting while he was studying at the University of North Carolina, Charlotte. “I did photography for a year-and-a-half, and at some point, I walked out of the art building to the computer labs on the business side of the school,” he recalls. “Everyone was on spreadsheets or essays or online testing. I opened up this simple PC. The only art program was Microsoft Paint. That’s when I started working with it, and I haven’t stopped since.” 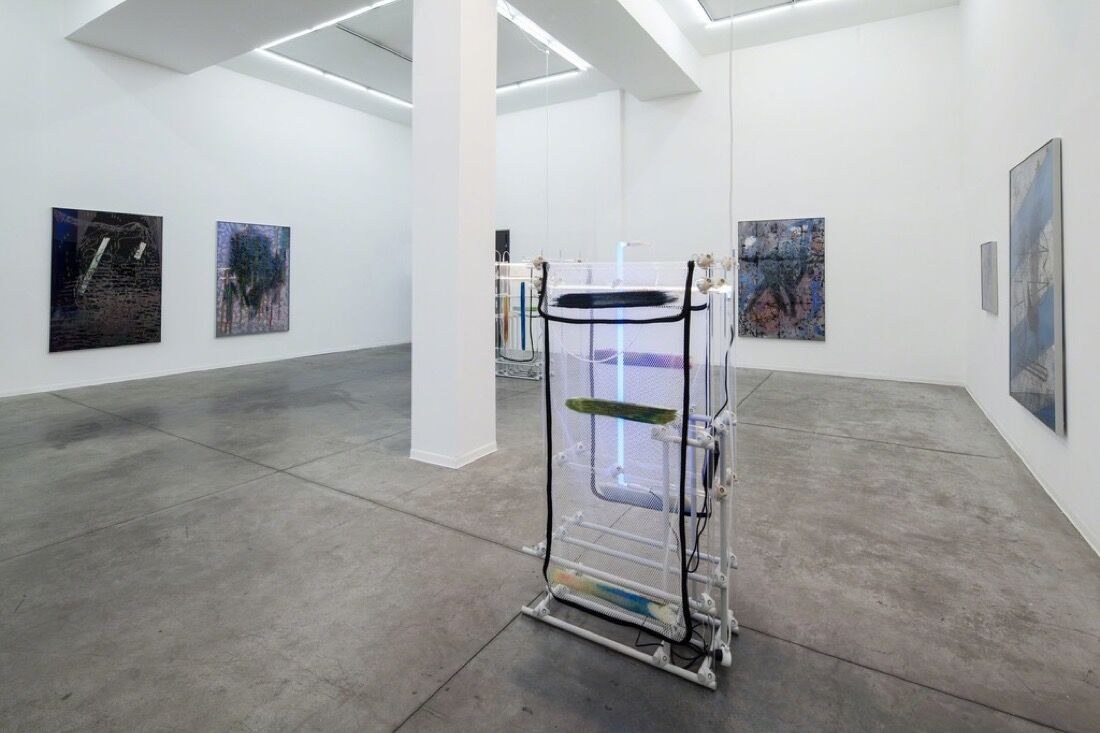 The process has become a little more sophisticated, but Goins is still using old technologies to create beautiful abstractions. He runs his finger on the outside of one of the finished works in his studio. “It becomes smushed,” he says of the visual content of the paintings. “In the process from drawing to putting it through all these different softwares to actually cutting, it destroys whatever I was doing originally.” Through this course of working without actually seeing the finished surface until the end, Goins says he gives himself over to the production of the painting. “The etching is permanent. I have to live with every decision.”
—Maxwell Williams
“Darren Goins: Command Shift 4” is on view at Hezi Cohen, Tel Aviv, Oct. 29–Dec. 19, 2015.
Follow Hezi Cohen on Artsy.
Related Stories