David Claerbout Stages a 1,000-Year Battle between Architecture and Time

Ian Epstein
Mar 23, 2016 11:00am
Walk into Sean Kelly Gallery in New York these days and you’ll find yourself transported to Berlin, several hours into the future, in front of the city’s storied Olympic stadium. When I visit, it’s a bit before 2am there, and the ovoid colosseum looms large under tattered clouds and a deep purple sky. In the darkness, the stadium appears spare, empty, devoid of human life. 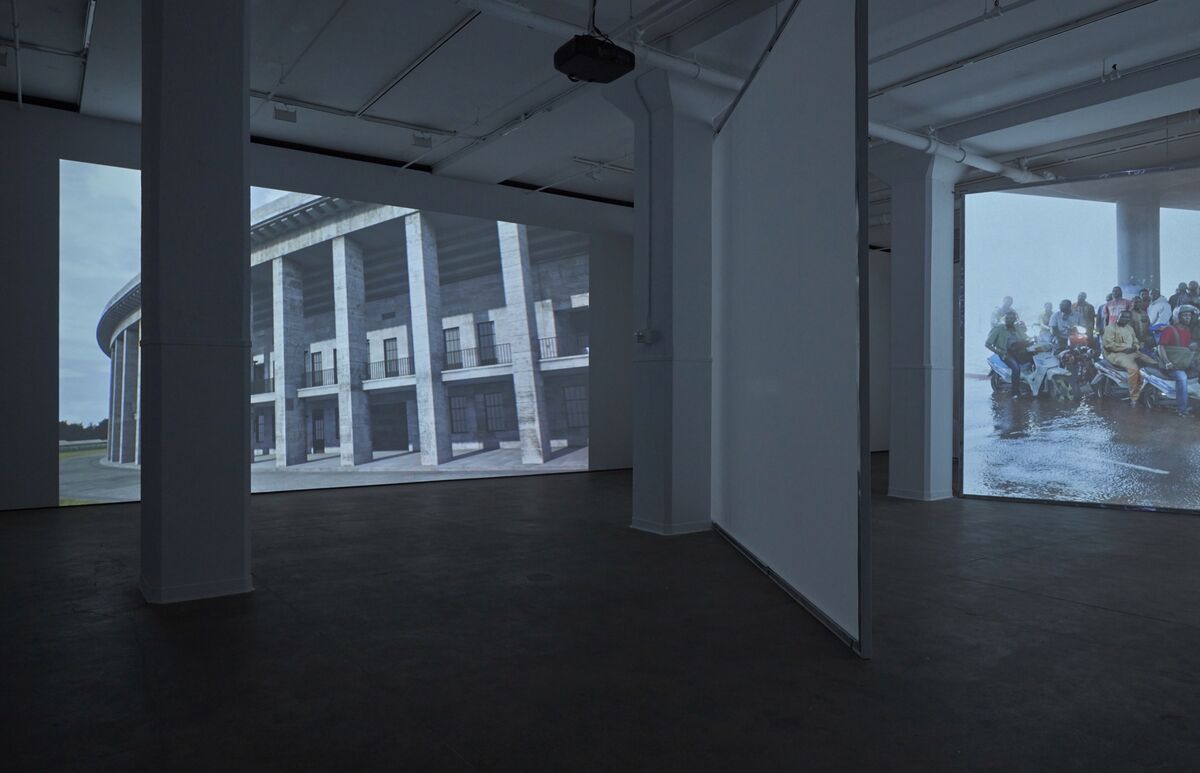 This is Belgian artist
David Claerbout
’s newest work, Olympia (The real time disintegration into ruins of the Berlin Olympic stadium over the course of a thousand years) (2016), a software-based video that is projected across the gallery’s main space. Olympia is the centerpiece of “LIGHT/WORK,” the artist’s first New York solo show in nearly a decade, and his first with Sean Kelly. “This crazy project is a film lasting 1,000 years, which is completely utopian,” Claerbout tells me in the gallery’s library. He’s referring to the claim he makes in the work’s title, and his project’s aim to show the stadium as it decays over 1,000 years, in real time. “Reasonably, I can guarantee 25 years of control over the program and updating it,” Claerbout wagers. “My ambition from the outset of this piece was nothing beyond making somebody get a sense of how short biological time is in relation to how little happens in the computer program.” The work is a collision of ideas about time—what does 1,000 years mean in relation to a single lifespan?
Claerbout lives in Berlin for part of the year, which led him to the so-called Olympiastadion. “When I was there on one summer day, I realized what the stadium was all about,” he explains. The stadium, first built for an Olympic competition canceled by World War I and later, in the 1930s, rebuilt according to the values of Nazi Germany, manages to embody much of the last century of German history in a single structure. The Nazis’ ambition for the stadium was to project architecture as power through a building that would weather and age in a manner similar to Rome’s Colosseum. With the Olympic stadium and other structures, the Nazis sought to reposition themselves as the heirs of the classical tradition, and imperial domination of the West. Claerbout found the numerous, identical columns that encircle the almost 75,000-person arena disorienting. “It was made to confuse people, to convert people to the new religion,” he explains. He saw the stadium as a temple where the authoritarian nation-state stunned individuals into feeling like part of a political body; put another way, the stadium was one more place to erase individuality. 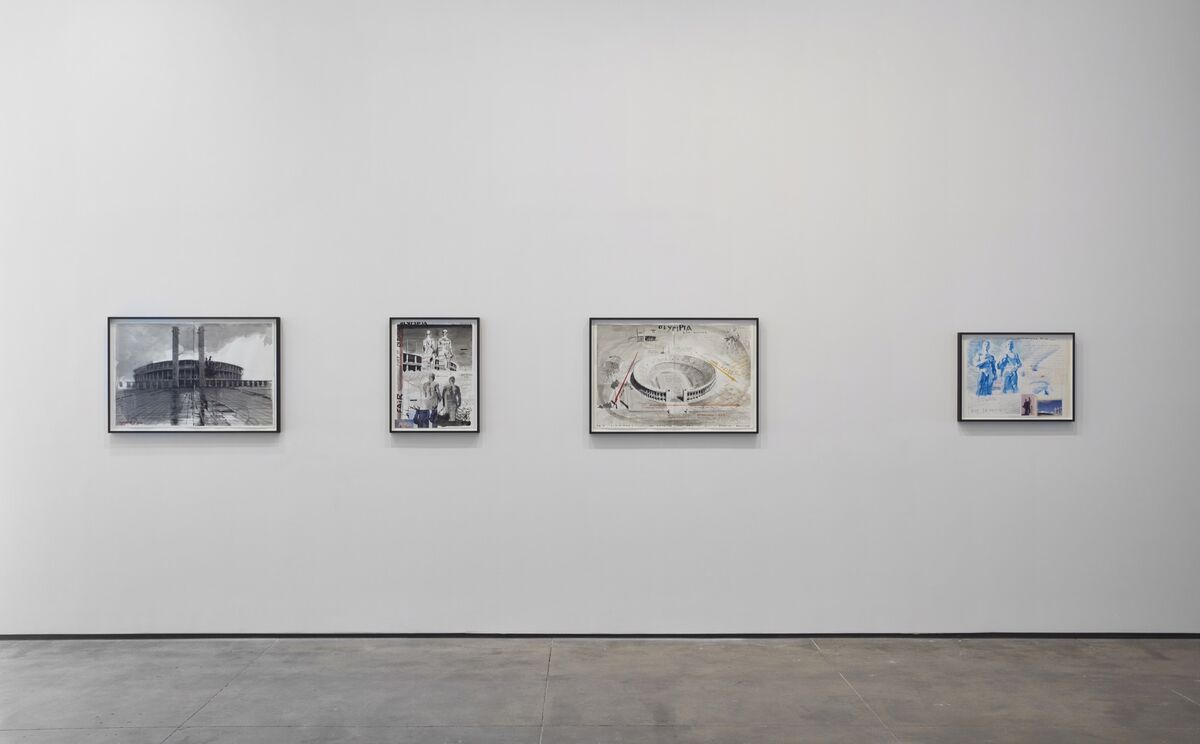 Advertisement
This troubled Claerbout, who set out to make an artwork that would use the structure as an enduring warning against the ideas it originally embodied. Today, as military tensions have shifted, Berlin’s Olympic stadium has again became a venue for more peaceful sporting events like the 1974 and, later, the 2006 World Cup. As an artist, Claerbout has made a name for himself through large-scale projections that recreate photographs using 3D tools, then use those same tools to send a cinematic camera along a carefully planned tracking shot; in doing so, he mimics the effect of looking itself (two such works are on view in this show). With Olympia, however, he was inspired to go beyond what he’d done in the past. Rather than simply animating a still photograph, Claerbout used video game software to create a link between a virtual version of the stadium and the real one, with the intention of representing the degradation of the structure in real time. His first step was capturing the full texture of the building’s exterior with an array of DSLRs. Then, to recreate as exacting a replica of the insides of the stadium as was possible, he worked with his assistant to model all the paths and passageways that cut through in order to make sure that when the structure failed, it did so accurately.
His project, in some ways, overlaps with Nazi architect Albert Speer’s idea of “ruin value”—that a building’s design should anticipate its collapse, and through crumbling, become a monument to those that built it. Claerbout imagined the structure’s slow rot over a thousand years, hoping to make Olympia “a resistance against rhetoric,” a virtual shadow following the real structure into the future, leaving it untouched by humanity. “It is a work that will fail,” Claerbout tells me, pointing to the fact that 1,000 years is a long time, and software becomes obsolete very quickly. “But at least it is structurally about that failure,” he adds. In the case of Olympia, he hopes that failure also communicates a cautionary tale about the seductive pageantry of state power. Back at the gallery, it’s still the middle of the night in Berlin, and Olympia’s point of view slowly revolves around the building’s exterior in a shot that evokes Claerbout’s other work. “One of the early dogmas that I have always stuck to,” Claerbout says, “was that I wouldn’t instantly gratify looking.” It’s a trait evident throughout this comprehensive exhibition of the artist’s recent work. The show also includes Oil workers (from the Shell company of Nigeria) returning home from work, caught in torrential rain (2013), an unsettling reflection on the uncertainties and instabilities brought about by our petroleum-at-any-cost economy, and KING (after Alfred Wertheimer’s 1956 picture of a young man named Elvis Presley) (2015–2016), a figure study of the young Elvis Presley that omits his voice and music. He’s concerned with making a memory more than spectacle. “If I can make people feel what is their own, lived time after they’ve seen the work a few times, I am happy,” he says. “That happens after you’ve seen the work—not during.”
Ian Epstein
“LIGHT/WORK” is on view at Sean Kelly, New York, Mar. 19–Apr. 30, 2016.
Related Stories