In the Absence of a Museum Survey, David Hammons Gets a Powerful Gallery Retrospective 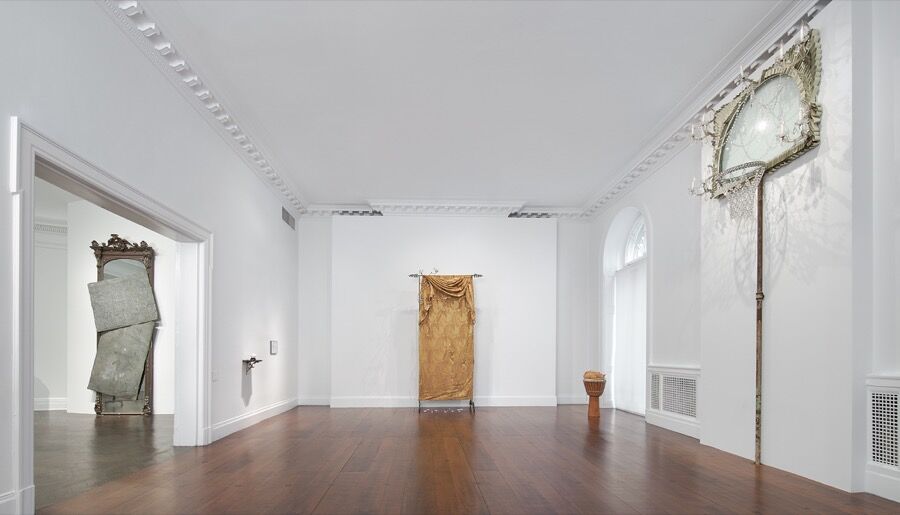 The boon to an artist’s legacy that comes in the form of a museum retrospective can be multifarious. Not only do such events serve as accolades, underscoring a certain status reached in terms of the work’s critical reception and market value, they also bring a museum’s intellectual resources to bear on an artist’s career. In addition to the exhibition itself, catalogue essays help inscribe the work into the art-historical canon, contribute new research, and add to the archival record—ensuring future generations can discover and engage with the artist’s work.
The art world has long been chomping at the bit to apply this treatment to the work of
David Hammons
, a manifestly important and visionary artist, but one who is famously resistant to signing on to just such a project. No doubt a large-scale retrospective will come someday and bring with it the requisite scholarship, but in the meantime, nonprofits and galleries have stepped in to fill the void. First, Triple Candie, a nomadic gallery then located in a former brewery in Harlem, organized “The Unauthorized Retrospective” in 2006; now Mnuchin Gallery has put together a micro-retrospective spanning five decades and featuring some 30 objects. It’s a beautiful, intimate, and complex showcase of works made from 1969 to the present day that makes one wonder if Hammons is better served by these more unconventional alternatives. 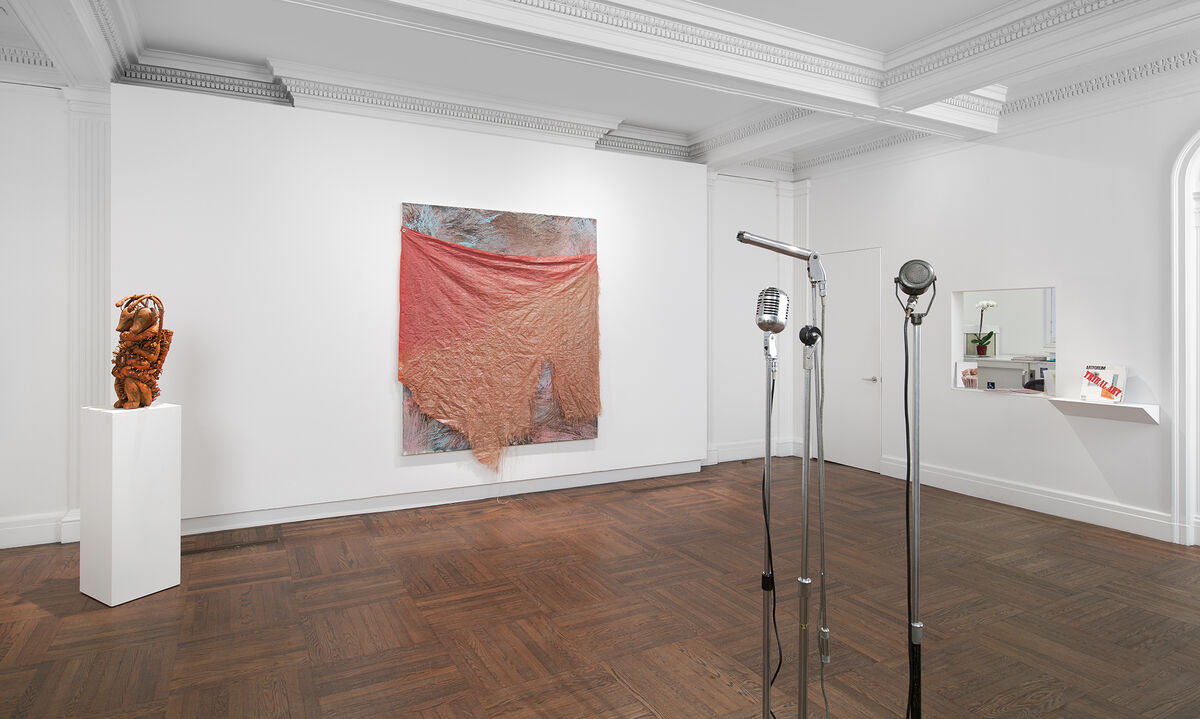 “This had been brewing in our minds since the tarp show in 2011,” says Sukanya Rajaratnam, a Mnuchin partner, of the second solo show of Hammons’s work that the gallery hosted (the current one will be its third, though the gallery does not represent Hammons, nor does any other gallery). “We had wondered why—the whole world had wondered why—there hadn’t been a retrospective.” So why did Hammons agree to this retrospective? “Honestly, I don’t know,” says Rajaratnam. “Maybe because we asked, and asked nicely. I say that facetiously, because he has turned other people down. I think we are very committed, and he knew that. He certainly loves this space.”
So it is that In the Hood (1993), Hammons’s iconic black hood, decapitated from a jersey sweatshirt, currently hangs, ghostlike, from the wall of Mnuchin’s early-20th-century Manhattan townhouse. Its haunting presence summons the specter of race in America. Hammons’s genius is to do much with very little. His works are often restrained, trimmed of any redundancies, but nonetheless deliver a powerful blow. This minimal, concentrated quality extends throughout the gallery, in the mesmerizing placement of the works, which Hammons—who lent his help to the show in the final weeks of installation, cutting 10 works and making subtle adjustments—oversaw. “He loves Japanese culture, and the way he described it to me was that he wanted it to feel like a garden in Kyoto,” says Rajaratnam. “Very spare, very zen.” 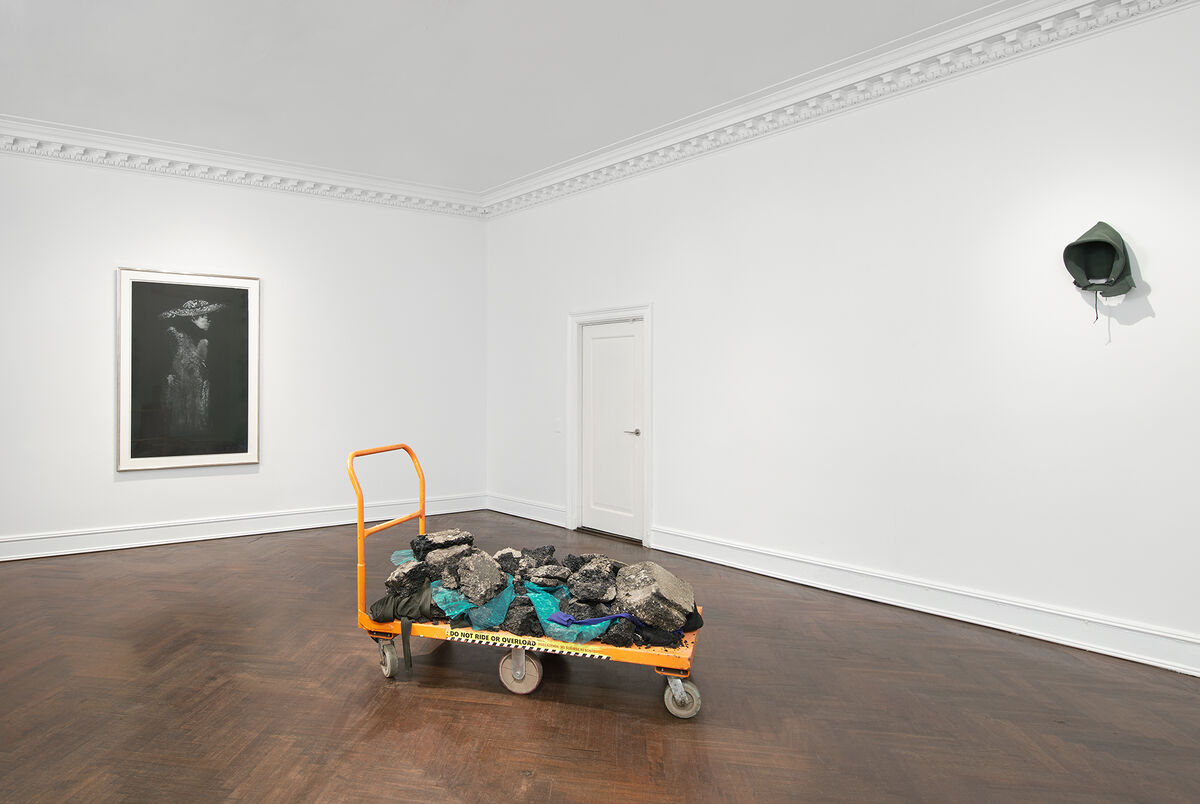 Advertisement
The influence of Japan (where Hammons has traveled widely and completed artist residencies) permeates the show, from the gentle, tinkering Japanese court music that, idiosyncratically, fills the two floors of the gallery, to a certain feng-shui-like thought given to the arrangement of objects. “It’s interesting to work with him and see the way he views things,” says Rajaratnam, pointing to one of the newest works in the show, from his series “Orange Is the New Black,” a wooden thrift store sculpture of a rat-like creature that Hammons coated in a shade of orange paint. “We had this piece turned so that when you came into the gallery, you saw the front of it. And he said to me: ‘Do you encounter everything in life that way? What’s wrong with the back? Look at the back; it’s sculpture.’ So he turned the piece.”
The relationships between works, guided masterfully by Hammons’s hand, are often powerful, as in one of his paint-splattered fur coats draped over a mannequin, which faces, at an angle, a work from his new “Mirrors” series—a mirror with an ornate frame that is boarded over with coarse panels of sheet metal. Together, they are troubled signifiers of class that present an absorbing visual and conceptual puzzle. “She’s looking at the impossible,” Rajaratnam suggested as we walked through the space. 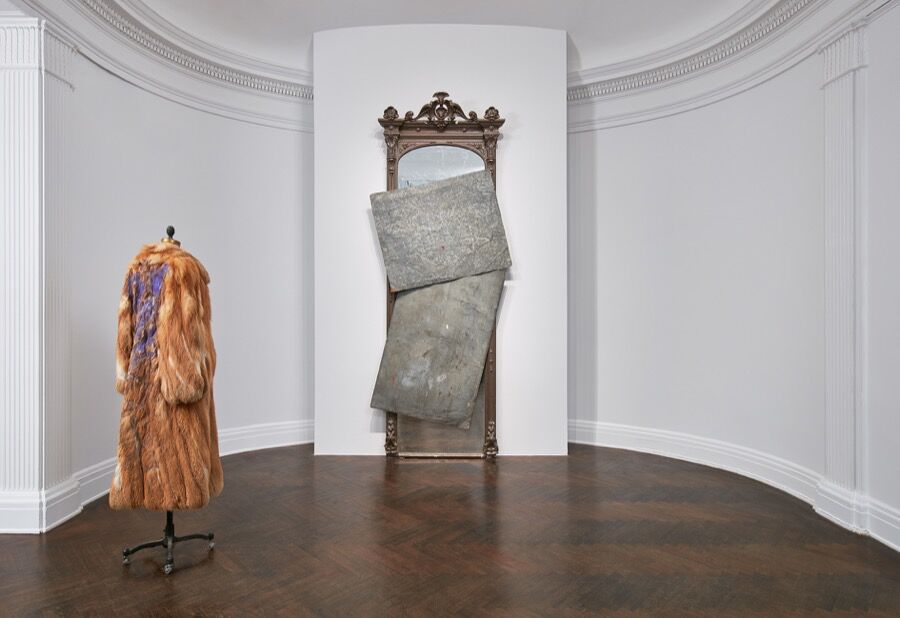 Elsewhere in the show, Hammons’s works are continually energized as potent foils to the wealth, status, and history denoted by the grandeur of Mnuchin’s space. Two basketball nets placed in separate galleries are, respectively, composed of elements of a chandelier and glinting waste bottle caps. They ironically posture as natural inhabitants of this elite world, while invoking the street beyond. His Untitled (1992), which recently featured in the Whitney Museum’s inaugural show in their new building, “America Is Hard to See,” a spiky afro-like form composed of metal wires covered in cut hair that protrude from stones, appears like a wild outgrowth against the gallery’s sleek lines and controlled dimensions. At Mnuchin, I noticed, for the first time, a small pearl hung from one of the sculpture’s prongs.
Hammons also contributed to the show several small, cheaply printed photographs, in Ikea frames, which document previous performances and ephemeral works. (“He didn’t say this,” Rajaratnam told me, “but we realized that it’s a riff on the Triple Candie show in 2006 where they did a similar thing. Now David is owning it.”) One image depicts the metal rungs of a New York City subway gate ensconced in condoms, a fleeting, whimsical work by the artist. These documents function as more ghostly presences that haunt the space. 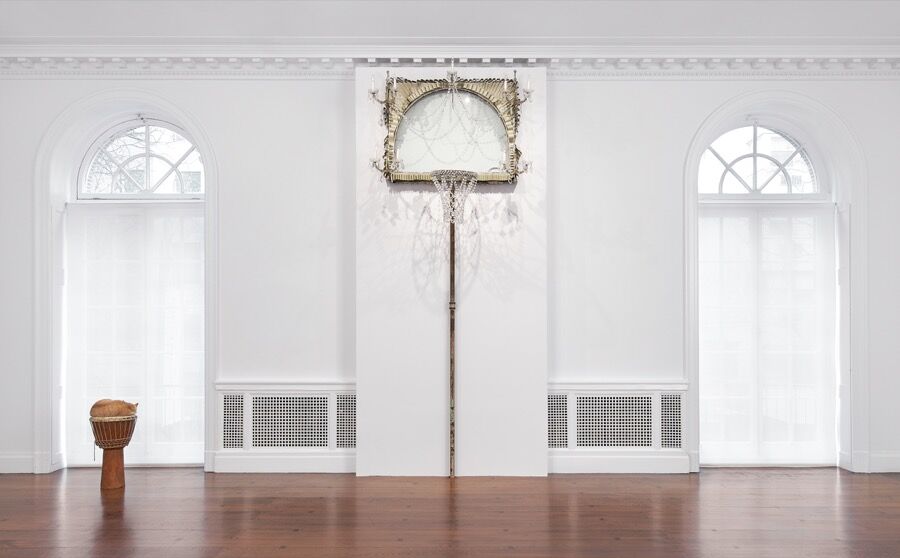 Placing the works in a former home, loaded with personal and political histories, allows Hammons to conjure a particular atmosphere of melancholy and absence. Whether those absences be the figure of Trayvon Martin and other African Americans whose lives were stopped short at the hands of institutionalized racism, as evoked through Hammons’s hood; the artist’s own body, coated in grease and pressed against paper to create silhouettes of his form in his early “bodyprint” series; or the bodies missing from behind the standing mics in Which Mike Do You Want to Be Like…? (2001)—Hammons evokes a powerful sense of human loss and transience. This quality, which perhaps not coincidentally lies at the heart of zen philosophy, would be near-impossible to summon within the modern white cubes of most museum spaces.
Tess Thackara
“David Hammons: Five Decades” is on view at Mnuchin Gallery, New York, Mar. 15–May 27, 2016.
Related Stories