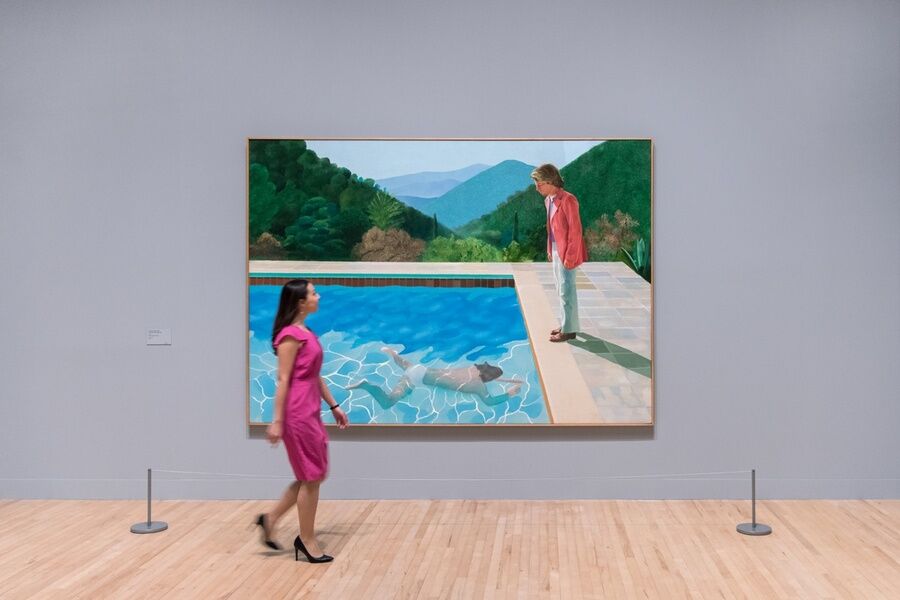 In
David Hockney
’s 1970 painting Ossie Wearing a Fairisle Sweater, the louche fashion designer Ossie Clark is depicted slouching in an armchair. His hair kisses his collar, his arm dangles, rakishly, by his side. The fairisle sweater he’s wearing is defined by its concatenation of bright, contrasting colors. It is unmistakably British. It speaks of harsh weather or homeliness, with a flash of irony.
That Hockney has made such sartorial symbols his own over close to six decades of painting might explain why crowds appear, day after day, at “David Hockney,” Tate Britain’s retrospective of the artist’s work, marking his 80th birthday later this year. (The Clark portrait, one of the artist’s most famous, is partway through the show.) For most, Hockney is at once rustic yet metropolitan, easy to understand yet varied, his occupation with technologies and trends changing with fashion. He is the toast of Yorkshire, a homegrown creative who rose to the heights of the art world but never lost his roots. He punctures the pomposity of the exhibition space with lighting bolts of wit. 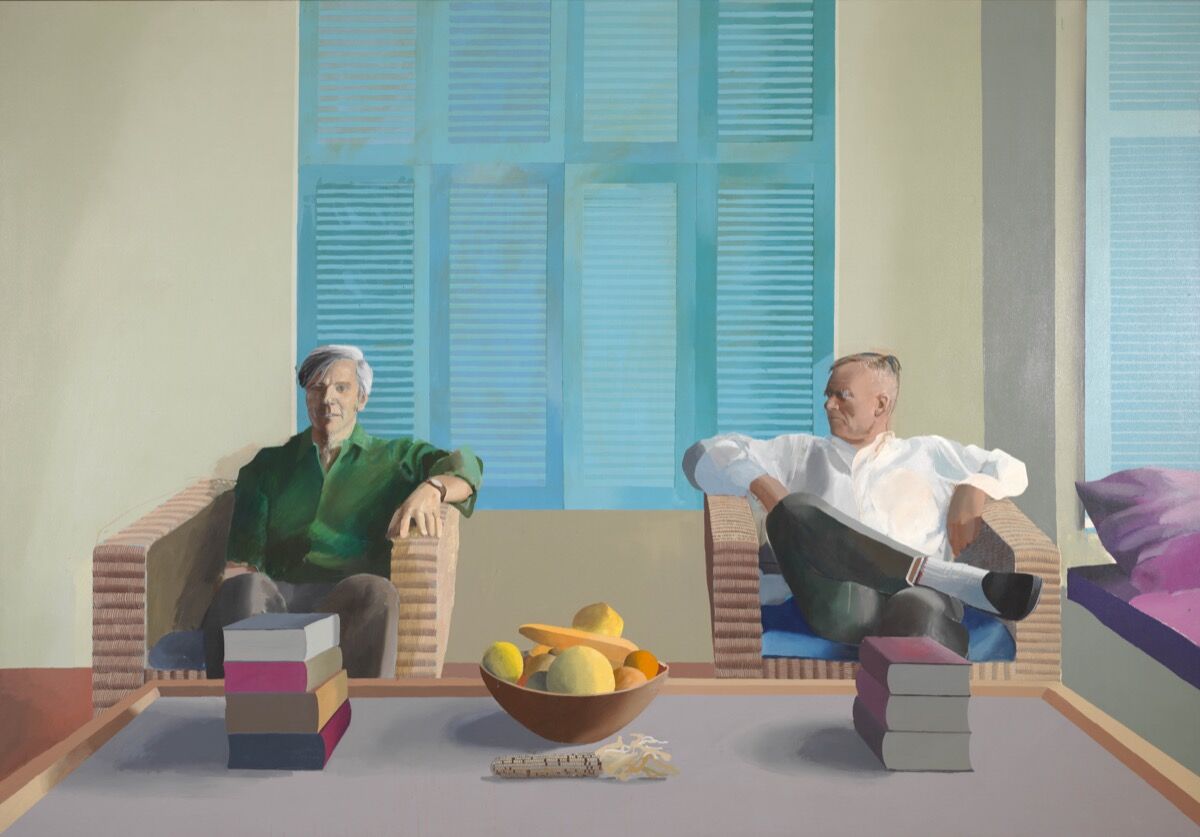 That playful need to appropriate the art community’s hallowed ground is seen from the show’s beginning. A section called “Play within a Play” tells how Hockney has always “questioned the conventions of picture-making.” His 2001 book Secret Knowledge: Rediscovering the Lost Techniques of the Old Masters discusses the artist’s theories about the widespread use of optics in the work of painters since the early 15th century—“This book is not just about the past,” he writes, “it is about now and the future”—and this autodidact impulse extends to his own practice. His Portrait Surrounded by Artistic Devices (1965) shows his father, Kenneth, surrounded by various different styles of painting, the titular devices, such as color (a red stripe, retreating like a path in a landscape) and geometry (oblongs, squares, and cones).
This scholastic inventiveness stems from Hockney’s studies at the Royal College of Art between 1959 and 1962, but the artist’s move to Santa Monica two years later changed things forever. It is Hollywood with which Hockney will ever be associated: the dreamlike, homoerotic vistas of bathers ascending, naked from the pool (Peter Getting Out of Nick’s Pool, 1966), the static portraiture of Los Angeles cultural royalty frozen in time (American Collectors, 1968). Hockney splashed on canvases what so many creatives across film, books, and music have represented before and since: beautiful, carefree indolence among those rich in time. 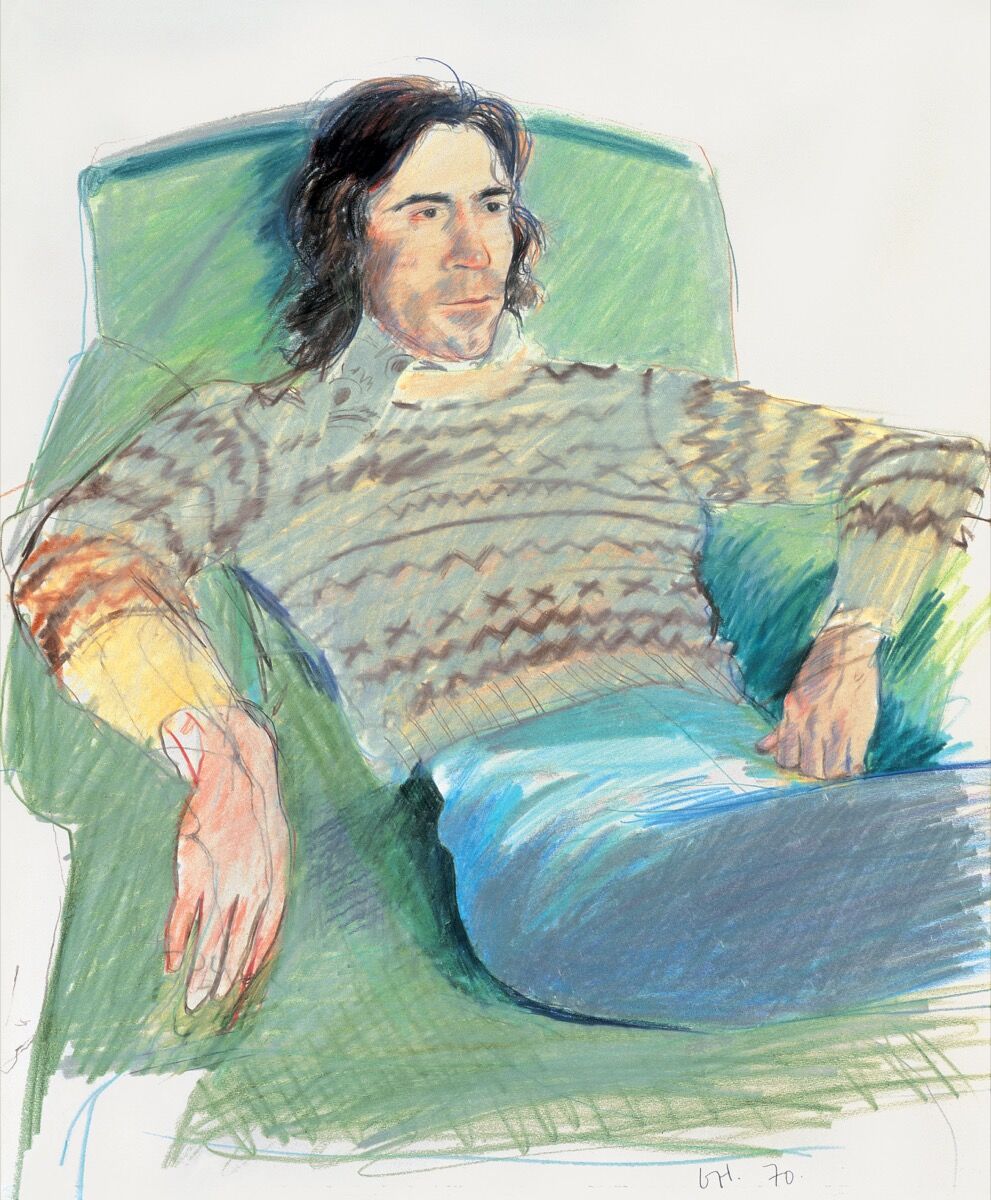 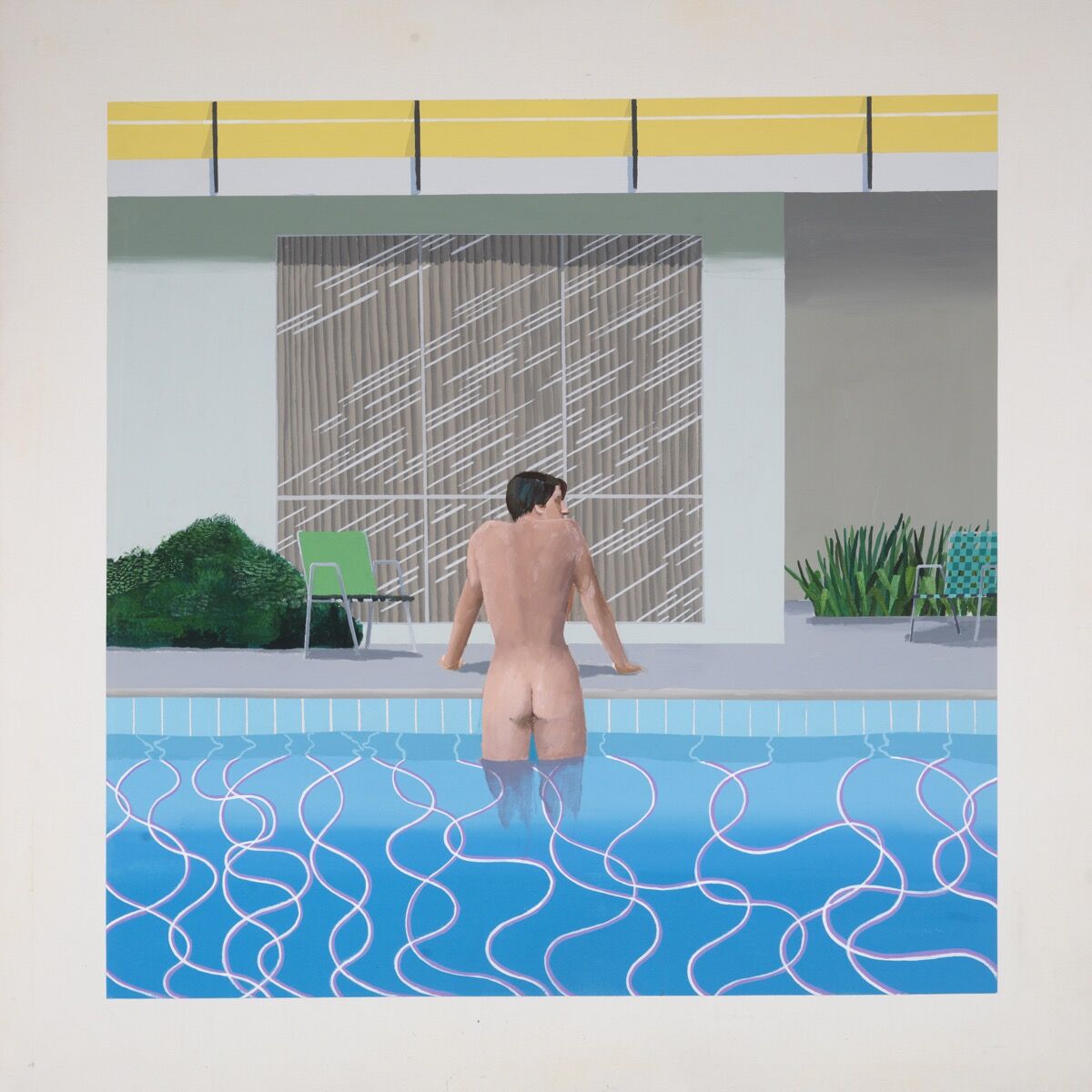 Advertisement
Such work forms the exhibition’s highpoint, the peak of Hockney’s fashionability. His later experiments in photo-collage—his attempt to play with the representation of space, including his habit of picturing his own shoes, as in My Mother, Bolton Abbey, Yorkshire (1982)—seem gimmicky compared to his earlier practice, a fate also reserved for his iPhone and iPad drawings, completed in the last 10 years and already feeling like a lifetime ago.
In the 1990s, Hockney began to spend more time in his native Yorkshire, especially the unspoiled landscape around the coastal town of Bridlington, where he later lived. The Road Across the Wolds (1997) shows a thoroughfare zigzagging across a surprisingly flat variegation of fields, which appears like a patchwork quilt. His video work The Four Seasons, Woldgate Woods (2010–2011) occupies its own room, appearing across four screens that show his distinctive grid, every frame with subtly shifting footage of the vegetation in front of it, each shot at a different time of year.
“The history of our changing perceptions is more than a history of changing tastes and fashions,” writes the Yorkshire-born novelist Margaret Drabble of this period in Hockney’s career. “The Hockney paintings of the 21st century have given us a new Hockney landscape, a startling contrast to the sunlit landscapes he left England to find.” 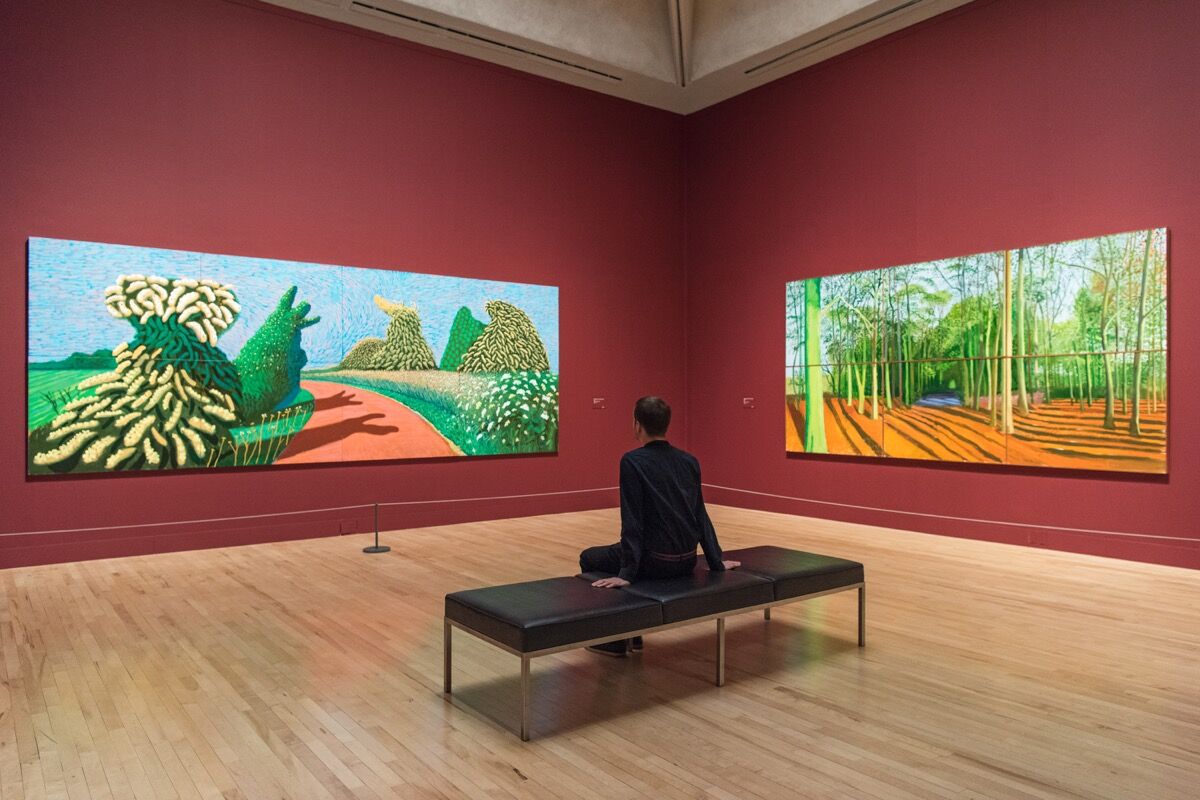 As we near the exhibition’s close, Hockney’s newer works Garden #3 and Two Pots on the Terrace (2016), depicting the exterior of his Hollywood residence, have very nearly the same dominant rich blue and horizontal striations as his famous painting of Christopher Isherwood and his partner Don Bachardy, completed almost half a century earlier. The new work, however, is inferior and contains no people, a property shared by much of his later compositions.
It is in part the artist’s prolific output that has made him such a perennial draw. Few British artists have the status or fiscal power to occupy such a prominent position in the country’s popular consciousness. Whether his work has maintained the standards set by his 1960s output is perhaps less interesting than why people continue to come out in droves to see his work. I suspect it’s nostalgia: a reminder of that favorite old jumper, that time in your life when your clothes fit better and the skies were bluer, and we were all a bit more beautiful.
Rob Sharp
Related Stories