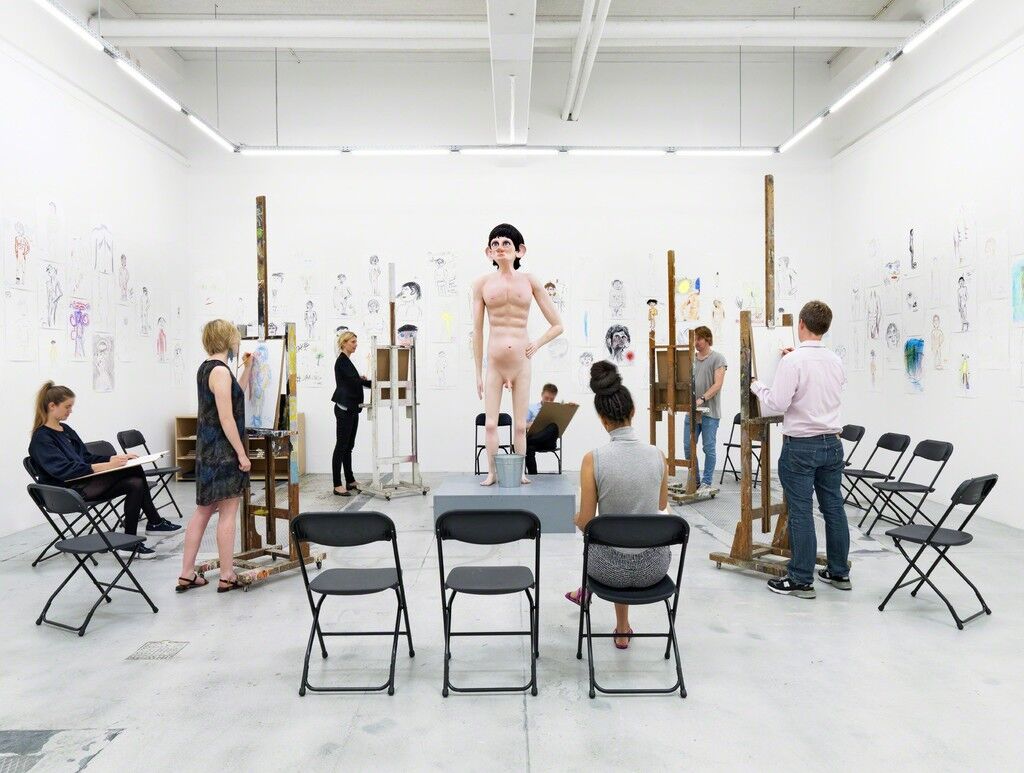 The live model is a scarce presence in artist studios today. Far more artists work from photographs than living, breathing flesh and blood—models have to be paid, after all. Life drawing classes seem more like a quaint convention of fusty old art schools rather than the core component of an artist’s education that they used to be.
Taking root in Renaissance Italy with the rediscovery of Greco-Roman antiquity and its idealization of the nude, the practice of drawing from life firmly established itself in the art academies of 17th- and 18th-century Europe and America. While art schools still offer life drawing classes, the practice has become somewhat outmoded, in part because it’s associated with a certain conservatism, at the heart of which lies the belief that the ability to render an exact likeness of a figure is the highest of artistic achievements.
So it has been something of a surprise to see two contemporary artists whose work has nothing to do with Realism, in the art historical sense, make the life drawing class the subject of significant museum exhibitions—
Jeremy Deller
’s “Iggy Pop Life Class” at the Brooklyn Museum, up through March 26, 2017, and
David Shrigley
’s recently closed “Life Model II” at the Rose Art Museum outside of Boston. While their projects are quite different, their life drawing experiments yield some meaningful observations.
Both shows involved the orchestration of a life drawing class and the participation of members of the public. At the heart of Deller’s project is rock legend Iggy Pop, who posed nude this past February for a class of 21 art students (ranging in age from 19 to 80). Those drawings now hang in the Brooklyn Museum along with a selection of male nudes from antiquity to the present day, selected by Deller from the institution’s collection.
Shrigley, meanwhile, created an oversized mannequin-like sculpture of a statuesque, voluptuous nude brunette, which he surrounded with a circle of yellow chairs and several large wooden easels. Participants—all were welcome—could enter the Rose Museum and sketch her, and the resulting drawings were displayed nearby on the gallery walls. This was, in fact, the second iteration of Shrigley’s “Life Model” project, the first of which featured a urinating male figure in 2013. 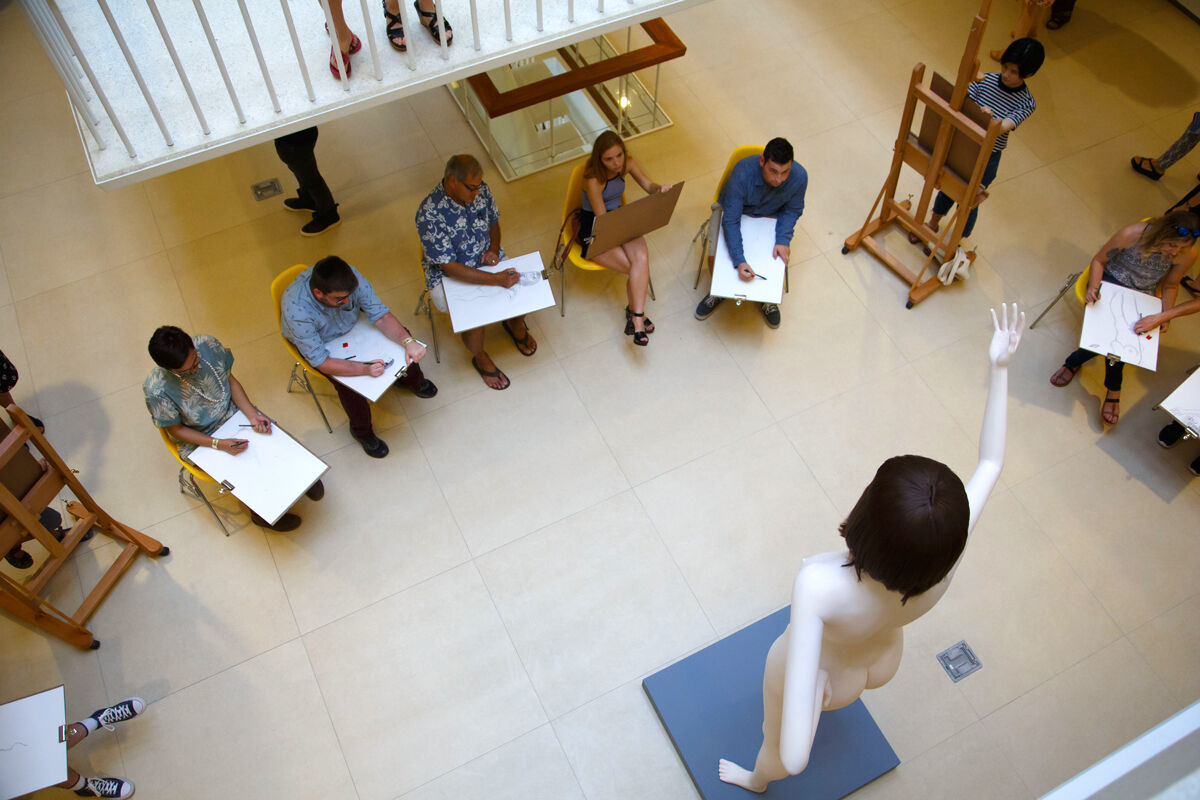 Having made a career out of whimsical, doodle-like captioned images that capture the absurdity of the human condition, Shrigley is just about the last artist you’d expect to participate in a life drawing class, which makes his project all the funnier. None of his many renderings of bodies or body parts—including his sculptural commission for London’s Fourth Plinth in Trafalgar Square this past September, Really Good, a giant bronze hand giving the thumb’s up sign with a disproportionately long thumb—are particularly realistic, which is a large part of the charm of his work, and also what makes the life drawing exercise so curious.
“I’m not trying to draw badly. I’m just trying to draw without any consideration of craft,” he told the New York Times Magazine several years ago. In an essay for the Rose show, its curator, Kim Conaty, notes that Shrigley had little interest in the “requisite life drawing classes” as a student in the 1980s and ’90s at the Glasgow School of Art, a hotbed of figurative painting at the time. So, in effect, he “asks viewers to work in a manner precisely distinct from his own,” writes Conaty.
That manner is also distinctly unlike the conventional academic practice. Shrigley’s model is inanimate, a humorous take on the grueling feats of stillness that models (including Iggy Pop, in Deller’s experiment) are known to undergo in life drawing classes. Her body parts are slightly out of proportion and not quite right—very far from the ideal male figure that originally stood on the dais back when the most lithe and finely proportioned male athletes were preferred as models for a room full of male artists in the academies.
The resulting drawings, rendered by members of the public, vary from earnest attempts to capture the figure’s likeness to Shrigley-esque sketches that feel more like homages to the artist than exercises in life drawing.  (To level the playing field, Shrigley did sketch a live model, a mime actor, in a series of strangely touching drawings that appeared in the show as well.)
Deller’s experiment might seem more traditional at first, since the model is indeed alive, and actual art students participated in the class. “It’s actually very traditional, I would argue,” said Deller, a Turner-Prize-winning artist known for orchestrating large-scale projects that often involve collaborations with the public. But his choice of a celebrity model—Iggy Pop—changes the sitter-model dynamic quite considerably. 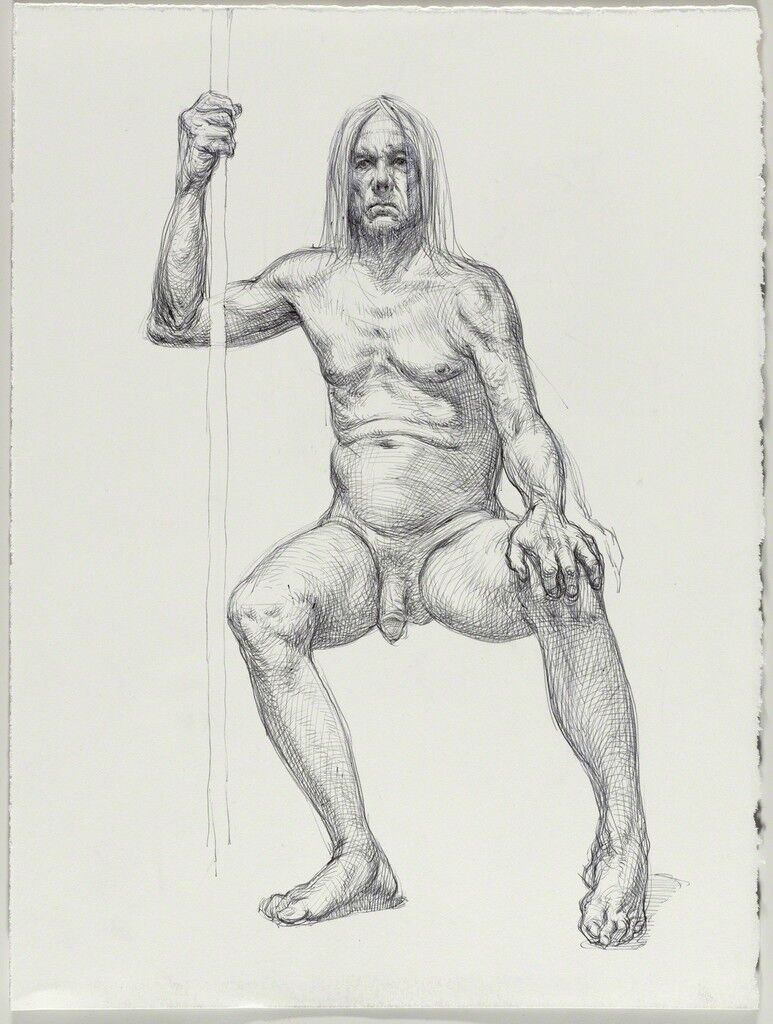 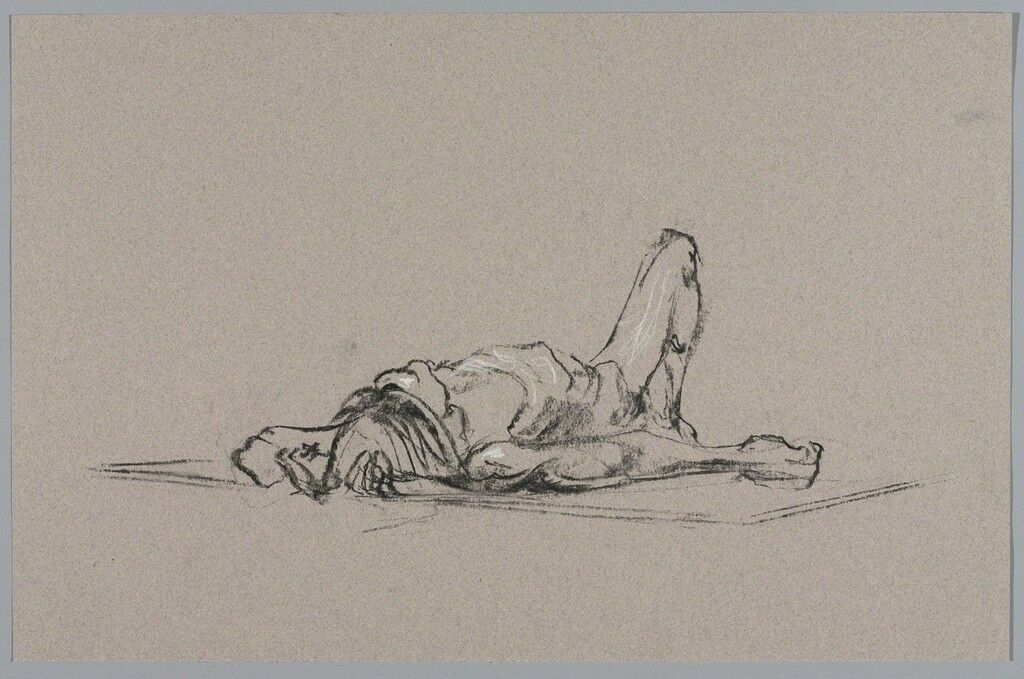 Charlotte Segall
Untitled (Lying pose), 2016
"Iggy Pop Life Class" at Brooklyn Museum, Brooklyn
Advertisement
Pop, with his famously wiry, flexible body, which is recognizable from his raucous shirtless performances and numerous press shots, is the cornerstone of the project. “I just thought his body should be documented through drawing rather than film and photography,” said Deller. “I was hoping to present him over time, a slower, more considered way to present him to the public, to do him justice through life drawing. Drawing also has an emotional quality to it that photography and film lacks.”
Deller’s choice of Iggy Pop in effect overturns the conventional life drawing class. Typically, the model is unknown, merely a vehicle to display the skill of the artist’s hand. But here, Iggy Pop is what we see. And he is transfixing. It’s rare to see him so quiet and tame like this (apparently he was a very good model), and his body is no longer the compact, muscular machine we recognize from decades ago. Although, at 69 years-old, he’s in great shape.
At the same time, the drawings say less about Iggy Pop than the sheer variety of interpretations possible, from realistic renderings made from careful cross-hatchings to more abstract undulations of his muscles and flesh. Shrigley’s exhibition leaves a similar impression: It’s almost hard to believe that some of the drawings are of the same subject.
In the end, both artists turn the viewer’s attention away from him or herself and toward the drawings, and in doing so, they raise questions about the parameters of the artwork: What exactly is the work of art here? The project, the model, the drawings, or all of it? It’s welcome ambiguity born of a tradition that’s usually more black and white.
Meredith Mendelsohn
Related Stories