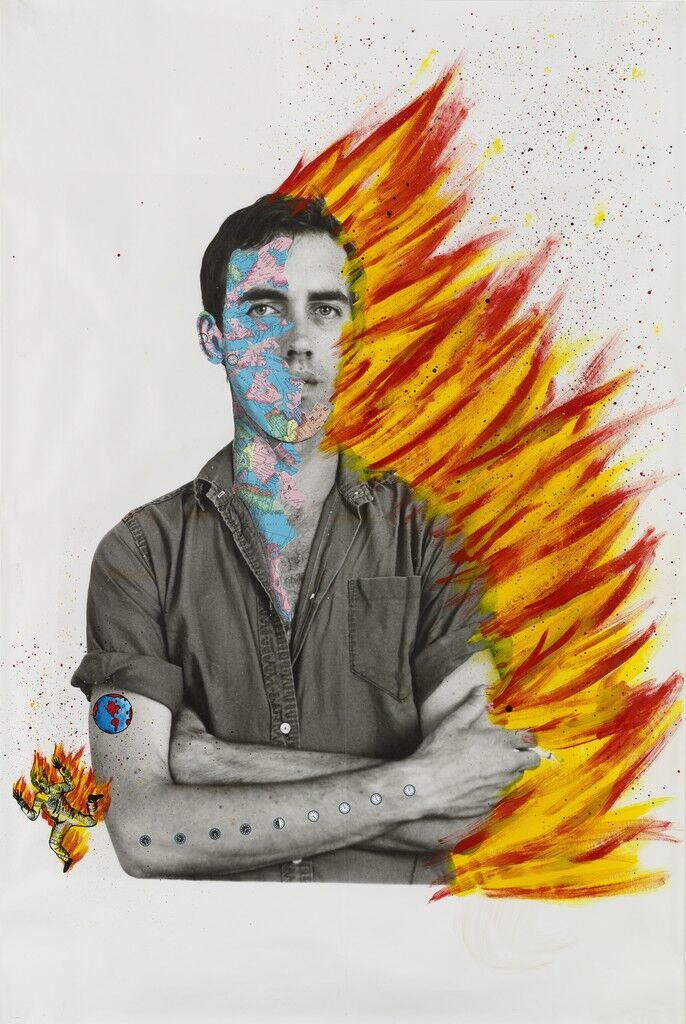 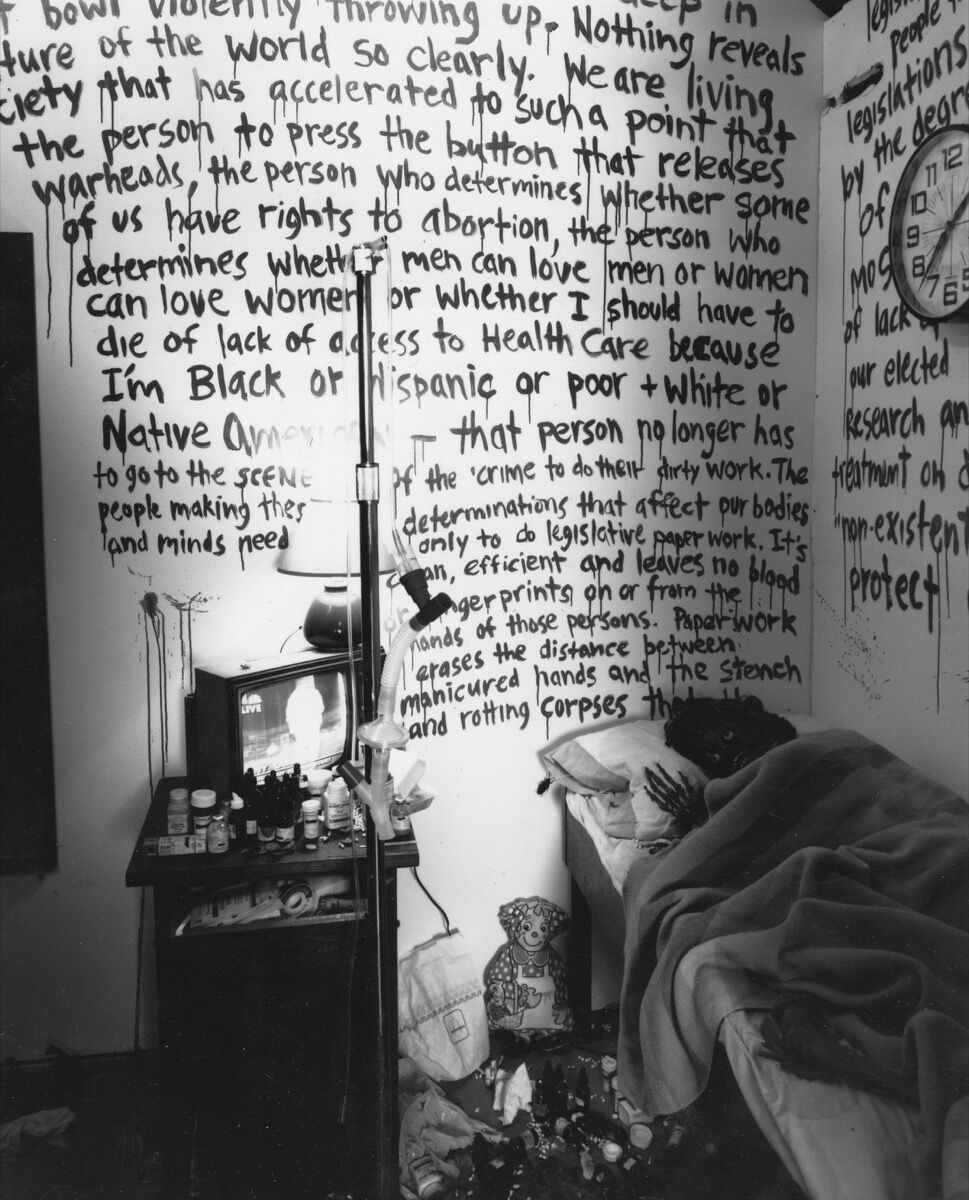 You might occasionally be tempted to kill your foes. The lies, filth, and despotism of politicians may desolate you, or you could find yourself wishing to see religion’s frocked, genocidal maniacs flayed alive. However, it is unlikely that society has assaulted you to such a degree; it takes an unimaginable combination of circumstances to reach these extremes.
David Wojnarowicz
did.
The artist’s legacy is an igniting force of resistance against the political inhumanity of his era, achieved through the insistence of his words and art. Emerging in the late 1970s, and increasingly visible as AIDS decimated his communities throughout the ’80s, Wojnarowicz gave utterance to his desperation by funneling his fury and trauma into guttural cultural soldiery. It isn’t possible to know Wojnarowicz’s oeuvre without knowing his writing, for it constitutes the well from which his visual output is drawn. While his words appeared as elements in his art, they can be more fully explored in his many publications, which include Close to the Knives: A Memoir of Disintegration (1991) and In the Shadow of the American Dream: The Diaries of David Wojnarowicz (1998). Both volumes provide an invaluable insight into the artist’s life and work.
Wojnarowicz’s narrative is of cruising, traffic, water, suicides, flesh, clouds, dilapidated walls, skeletons, transvestites, government, riverboats, hate, sex, gore, thieves, lovers, artists, and junkies. Throughout his career—particularly after the death of his lover and friend
Peter Hujar
in 1987, and Wojnarowicz’s own HIV diagnosis—these aspects found urgent visual form via collage, photography, installation, paint, discarded ephemera, sculpture, and more. The Whitney Museum of American Art now attempts to convey Wojnarowicz’s impassioned spirit in “History Keeps Me Up at Night,” a retrospective opening this week and remaining on view through September 30th. (A concurrent show of Wojnarowicz’s installation-based work is at P.P.O.W in New York through August 24th.)

David Wojnarowicz
Untitled (Green Head), 1982
Whitney Museum of American Art
Wojnarowicz was born in 1954 in Red Bank, New Jersey, to a violently alcoholic mariner father and a mother he would become estranged from for most of his life. His parents separated when he was two; his father committed suicide in 1976. A lineage of physical, sexual, and verbal abuse throughout Wojnarowicz’s childhood continued into his early teens, by which time he was hustling in Times Square, selling his body to “anyone interested,” as he would later write.
The diaries Wojnarowicz kept from his mid-adolescence until close to his death recount the roller-coasting trajectory he found himself on: family division, drugs, his rejection of American capitalist mores, societal isolation, profound friendships, injustice, depression, and sickness. He took many trips across the United States, hitchhiking, jumping train cars with America’s nomadic underclass—whose stories he collected—or driving to Montana, Arizona, and California. In 1978, he spent time in Paris and Normandy, where he fell in love and reveled in the culture of his literary influences, Jean Genet and Arthur Rimbaud.
Though he grew up in New Jersey and briefly lived in Michigan, Wojnarowicz settled primarily in New York from the early 1960s onward. It is his descriptive incandescence for the denizens and environments of the city—including its West Side Piers, its gay bars, and its downtown area—that elucidates the primary backdrop to his life. New York was Wojnarowicz’s crucible. He had a sinuous connection with the flow and grit of the streets, the Hudson River’s windswept moods, and the fractured light of dusk on waterfront haunts. These frame his observations of human and industrial movement. But as his writings progress, they document a man witnessing himself becoming a ghost in the city and the country that would kill him. 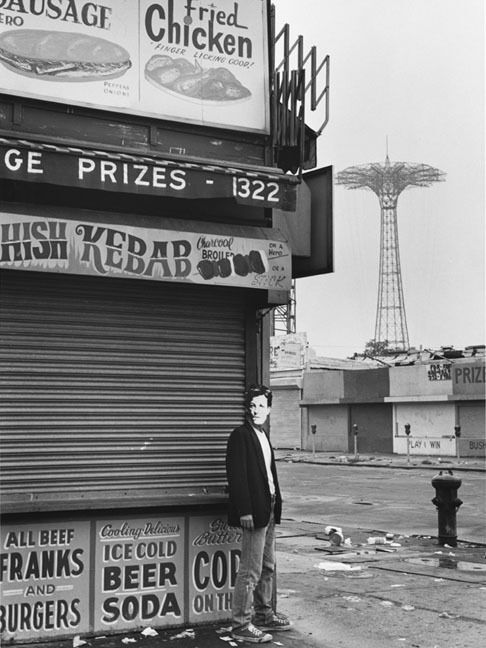 David Wojnarowicz
Arthur Rimbaud in New York (kebab, Coney Island), 1978-79/2004
P.P.O.W
Advertisement
Wojnarowicz was a frontline seer for dispossessed comrades caught in the maw of the AIDS epidemic who were subject to violation at the hands of virulently homophobic officials, who lobbied to deny gay rights and, therefore, further imperil HIV-positive people. These perpetrators included Cardinal John O’Connor, Senator Jesse Helms, and the Reagan Administration. Between them, these figures accelerated the pitiful deaths of thousands of Americans. Wojnarowicz—writer, artist, activist, poet—and his peers were possessed of the keenest tenderness toward their own decimated ranks, along with a necessary rage toward hostile, intransigent power. They knew that, sometimes, we must not agree to disagree.
Wojnarowicz began attracting the critical notice he so desired with the 1980 SoHo News publication of his photographic series “Arthur Rimbaud in New York” (1978–79), which depicts figures wearing a mask of the French poet’s face while posed in New York locales. The images draw parallels between the life of Wojnarowicz and that of his protagonist from a century earlier—one with anti-establishment ideals, the rejection of societal and political oppression, and homosexuality. (Wojnarowicz would die at the age of 37, the same as Rimbaud.)
During the 1980s, Wojnarowicz became a leading figure of the East Village scene, exhibiting both nationally and abroad. Increasingly, both his politics and the holocaust of AIDS elevated Wojnarowicz’s artistic presence as the most urgent of his tortured generation. His increasing fear and outrage is exemplified in several works in the Whitney’s exhibition: For instance, both the title and imagery of Sub-Species Helms Senatorius (1990) diminish Senator Jesse Helms into something less than human. He is rendered as a swastika-stamped arachnid with a bloated face leering out of a hellish body in red, black, and yellow, nature’s colors signifying a deadly warning. 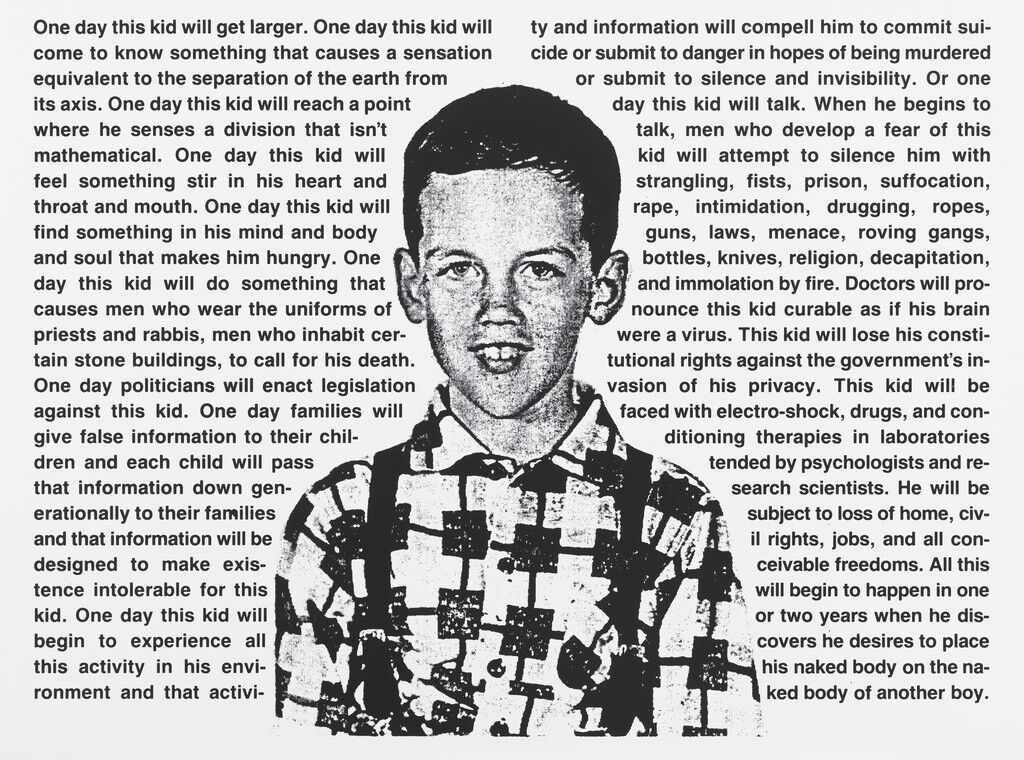 David Wojnarowicz
Untitled (One day this kid . . .), 1990
Whitney Museum of American Art
In Untitled (Hujar Dead) (1988–89), a grid of photographs taken immediately after Peter Hujar’s death from AIDS-related pneumonia is layered with text: anti-gay quotes from health and political administrators, coupled with Wojnarowicz’s own commentary—his revulsion at such callousness, and his fantasies of tearing them apart. (Untitled) One Day This Kid…(1990–91) presents an image of the artist as a young boy with a timeline written around him, which tells of the hatred, subjugation, and potentially violent death he will suffer because of his same-sex attraction. It is, in a sense, a time-based artwork highlighting the horrific implications of entrenched discrimination, and the damage that is soon to come: “When he begins to talk, men who develop a fear of this kid will attempt to silence him with strangling, fists, prison, suffocation, rape, intimidation, drugging, ropes, guns, laws, menace, roving gangs, bottles, knives, religion, decapitation, and immolation by fire.”
Wojnarowicz incorporated a wild array of motifs in his art. A childhood interest in cowboys could conjure thoughts of dying “amidst a tumbling of horses legs in the dust” or “tilting off a cliff with arrows piercing my body,” as he would write. One of his most famous photographs, Untitled (Buffalo) (1988–89), depicts buffalo plummeting into a canyon. The image is usually considered to be a personal reflection on AIDS and government complicity, but it also suggests Wojnarowicz’s long-standing thoughts on death, before HIV. The artist’s lifestyle was volatile. While living on the streets and working in Times Square, his life was in danger; he had known both killers and people who had been killed. Even in the 1970s, in Paris, he wrote of staying up to “trade blood with the stars”; Untitled (Falling Man and Map of USA) (1982), Yokio Mishima St. Sebastian (1983), and Untitled (Face in Dirt) (1990) evoke these early memories.
Images of what Wojnarowicz described as “fires billowing inexplicably on the sides of houses and trailers” are seen in Untitled (Burning House) (1982), while explosions that would send “flowers of black smoke reeling up into the dusk” engulf works such as Untitled (Burning Boy Installation) (1985) and its “coastline with teeth of red factories.” In the collaged Self-Portrait of David Wojnarowicz (1983–84), made with Tom Warren, it is the artist himself aflame, while in Untitled (Gorilla) (1984), an ape is bound and roasting in agony on a background made of dollar bills. 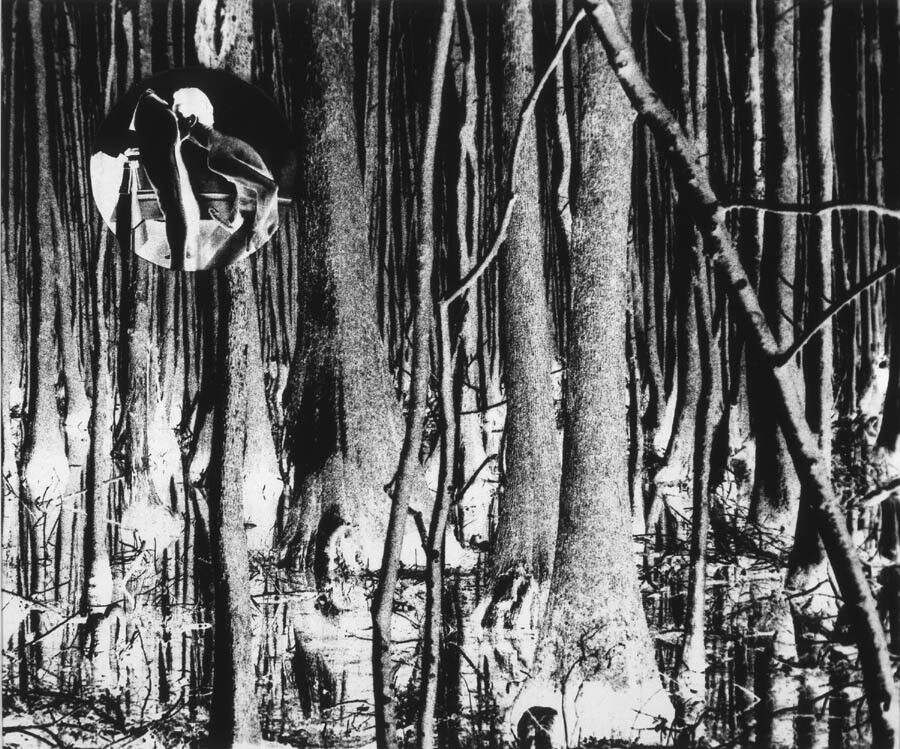 David Wojnarowicz
"Untitled" from "Sex Series (for Marion Scemama)", 1988-1989
P.P.O.W
Animals—cattle, dogs, rodents, insects, snakes, and mythological beasts—appear prominently throughout Wojnarowicz’s work. A beguilement with nature and an affinity for creatures was a bulwark throughout the artist’s life, despite (or because of) his father having “shot or killed” any his son was found with. Wojnarowicz even wrote of being a “foreign animal” himself.
In addressing the dread he felt towards American culture, military intervention, and AIDS, much of Wojnarowicz’s work comprised amalgams of manufacturing wastelands, contorted faces, fragmented maps, astrology, and war machines. His elemental Earth, Wind, Fire, and Water (1986) and his Globe of the United States (1990) exemplify these themes: The former contains a livid dark storm, an inferno enveloping a demon and a snowman, Native American symbolism (a reference to indigenous suppression), and the Earth tearing open, revealing a brain; the latter work consists of multiple outlines of the United States floating over an ominous, black abyss. Other works were even more aggressive—like a jacket he designed bearing the slogan “IF I DIE OF AIDS – FORGET BURIAL – JUST DROP MY BODY ON THE STEPS OF THE F.D.A,” which he wore at a protest against that organizational body in 1988.
Not surprising considering the erotically charged entries in Wojnarowicz’s diaries and the role of sex in his life—an encounter near Meteor Crater is particularly intense—sexual imagery is regularly featured in his art. In works from 1989’s “Sex Series,” black-and-white pictures of a city, a house, a bridge, and a train are punctuated by circles that bear images of erotic couplings. Themes of voyeurism and intimacy are again combined in Fuck You Faggot Fucker (1984), which features a gentler embrace between two men superimposed over a map of the world.
Wojnarowicz used his words and imagery to attack his adversaries. Meanwhile, these foes would deride his work to forward their own agendas. The artist was often in public disagreement or legal straits with political or spiritual leaders. In 1989, he disparaged Cardinal John O’Connor—a “fat cannibal from that house of swastikas up on fifth avenue,” in the artist’s words—in an exhibition essay funded by the National Endowment for the Arts. It resulted in John E. Frohnmayer, the NEA’s chairman, cutting the grant (which was subsequently reinstated, excluding for the catalog). 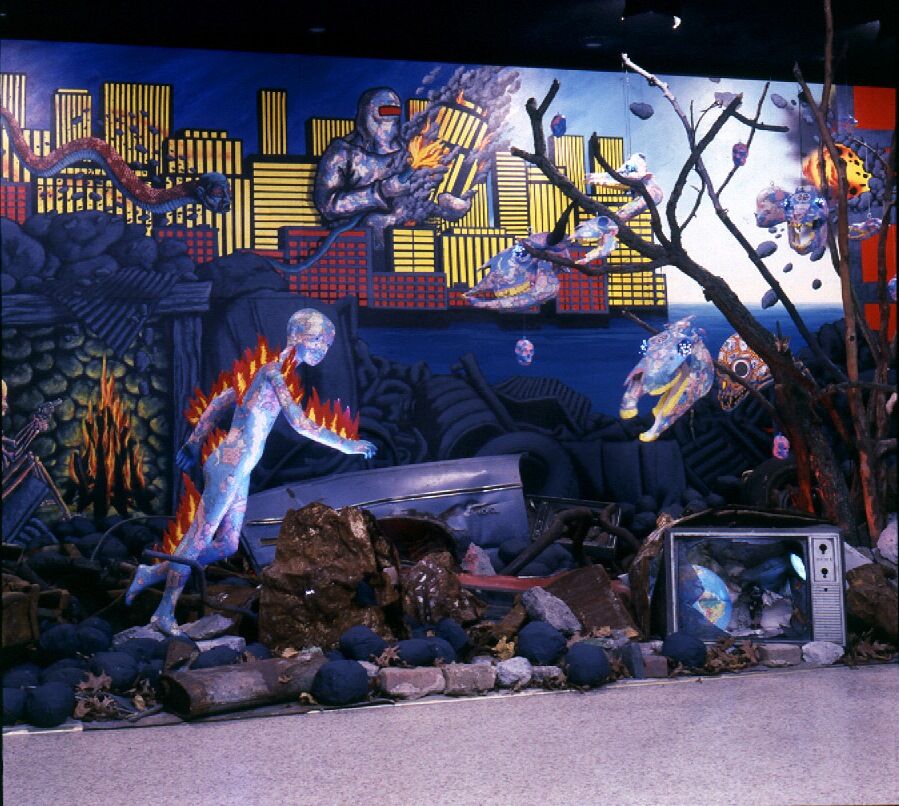 In 2010, almost 20 years after Wojnarowicz’s death, the Catholic League’s malignant Bill Donohue initiated a scandal over the inclusion of Wojnarowicz’s film A Fire in my Belly (1987) in “Hide/Seek: Difference and Desire in American Portraiture,” an exhibition at the National Portrait Gallery in Washington, D.C. The institution shamefully withdrew it. At issue was a scene of ants busying themselves over a crucifix, which Donohue found religiously offensive. Congressman Jack Kingston and Speaker John Boehner weighed in, among others, on the side of Donahue, who proclaimed that, had the artist followed Catholic doctrine, he wouldn’t have “self-destructed.”
Wojnarowicz, who died in 1992, remains as stalwart and aggressive a lantern against bigotry as he was in life, because what poured from his wounds was the viscera of truth, courage, and anguish as he chronicled an apocalypse in motion. His voice remains clear and singularly authentic.
AIDS activist, writer, and art historian Simon Watney has been a long-time admirer of Wojnarowicz’s work, both during his life and after his death. I asked him to reflect anew on what made Wojnarowicz so vital. “Some artists emerge in times of great historic drama as if with an inner understanding that they do not have much time, and also that the horror all around them is eerily familiar,” Watney wrote. “Such artists work for the future, knowing there isn’t time for recognition in their own lifetimes. Dissatisfied with mere autobiography, they transform private trauma into a public language, creating an enduring symbolic world out of the fast-fragmenting and indecipherable business of everyday life. It was David’s alchemical gift to provide us with a whole new tarot pack of images adequate to the countless awful stories of the vast army of the forgotten and the unknown dead, including the still hourly lengthening roll-call of those whom HIV has vanquished. This he knew, and had to live with, on top of everything else.…Such a body of living, life-affirming work.”
Darren Jones
Related Stories 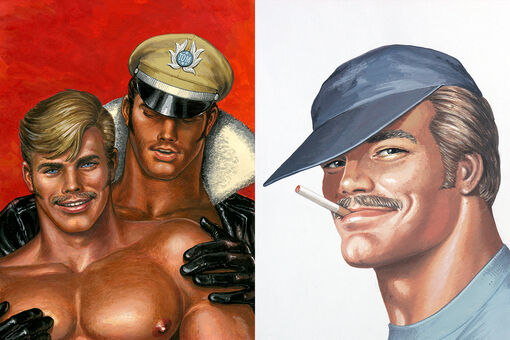 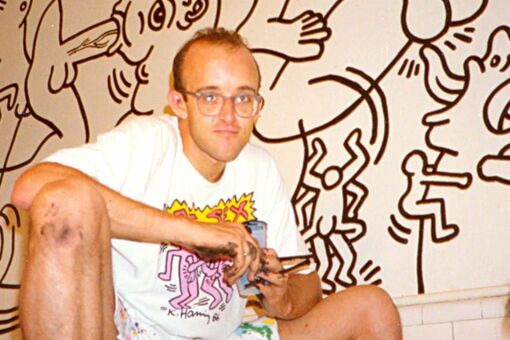