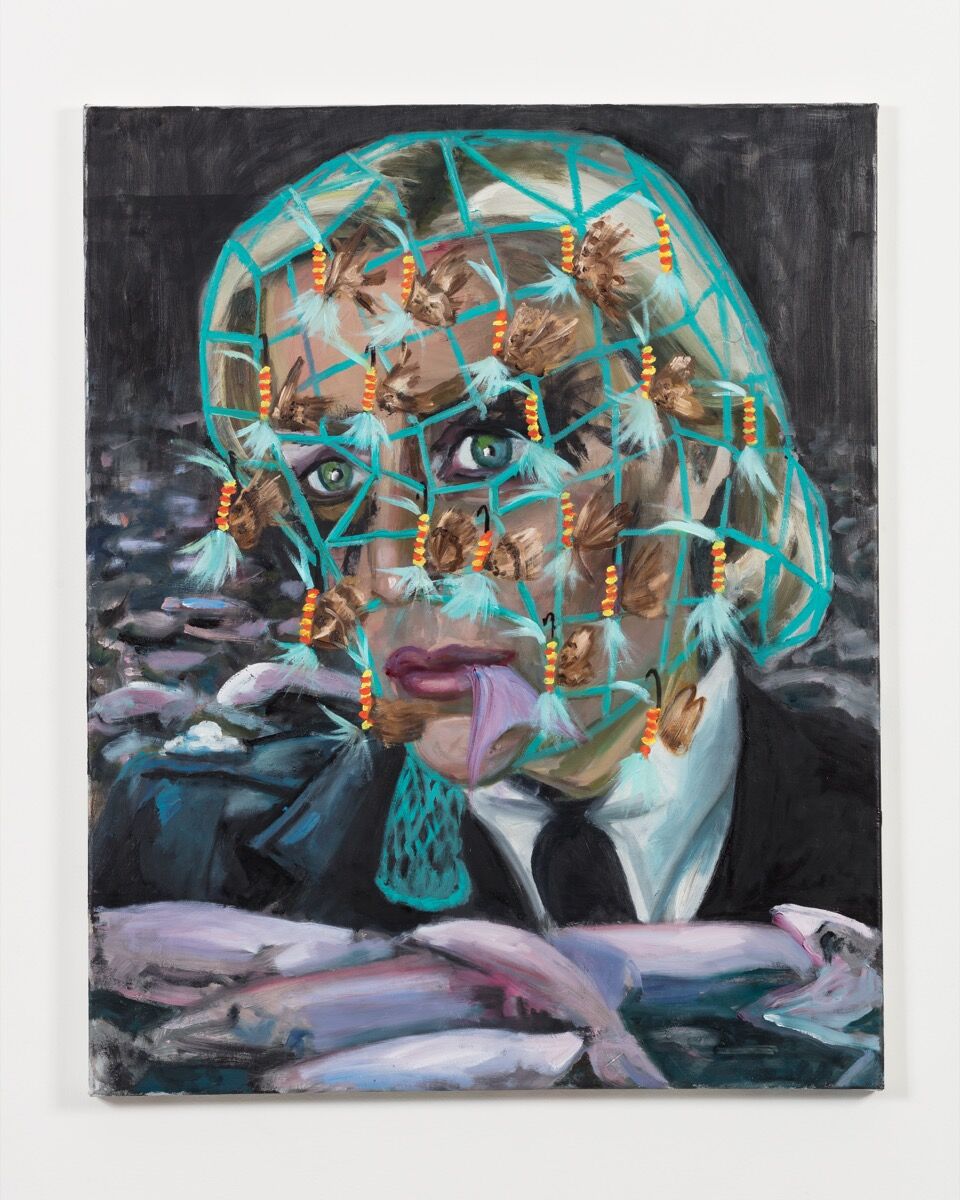 Gillian Anderson looks confused. It might be because she’s wearing a net over her head—festooned with colorful, feathered fishing lures—or that she appears to be submerged nearly to her neck in a lake of cold, dead fish.
“Sirens,” a series of paintings by
Dawn Mellor
on view at Team Gallery in New York, presents an array of 18 portraits of women who are alternately stoic, bemused, relaxed, and frightened. The artist—born in Manchester, and now working in London—has based all of these compositions on images of female police officers from primarily British films or television series, like Coronation Street, Broadchurch, and Happy Valley. (Anderson, for instance, is pictured via her portrayal of detective superintendent Stella Gibson on The Fall.)
The title of the show, as a press release elucidates, is a “triple-entendre, evoking the sounds emitted by cop cars, as well as the vernacular term for a sexually provocative actress and the deadly seductresses of Greek mythology.” In most other cases, that would seem like a softshoe artspeak routine, signifying not much at all. The funny thing? It’s actually a helpful way to start understanding a body of work that indulges in oddness. Mellor made these paintings in 2016, but they couldn’t have helicoptered into the United States in a more fraught or confusing time. Their inherent strange beauty is made stranger by context, however accidental: the context of America’s dysfunctional relationship to its police forces; the context of women’s agency, power, and authority in the face of male domination and abuse.
Any toehold on this material seems tenuous at best. These could be profiles of ordinary heroism—women as professionals, facing danger with grit and a stiff upper lip—but how heroic can you be when you’ve got what appear to be frilly lace garter belts wrapped around your head? How seriously can you be taken when you’re wearing a bicycle helmet and nibbling on a severed human finger? 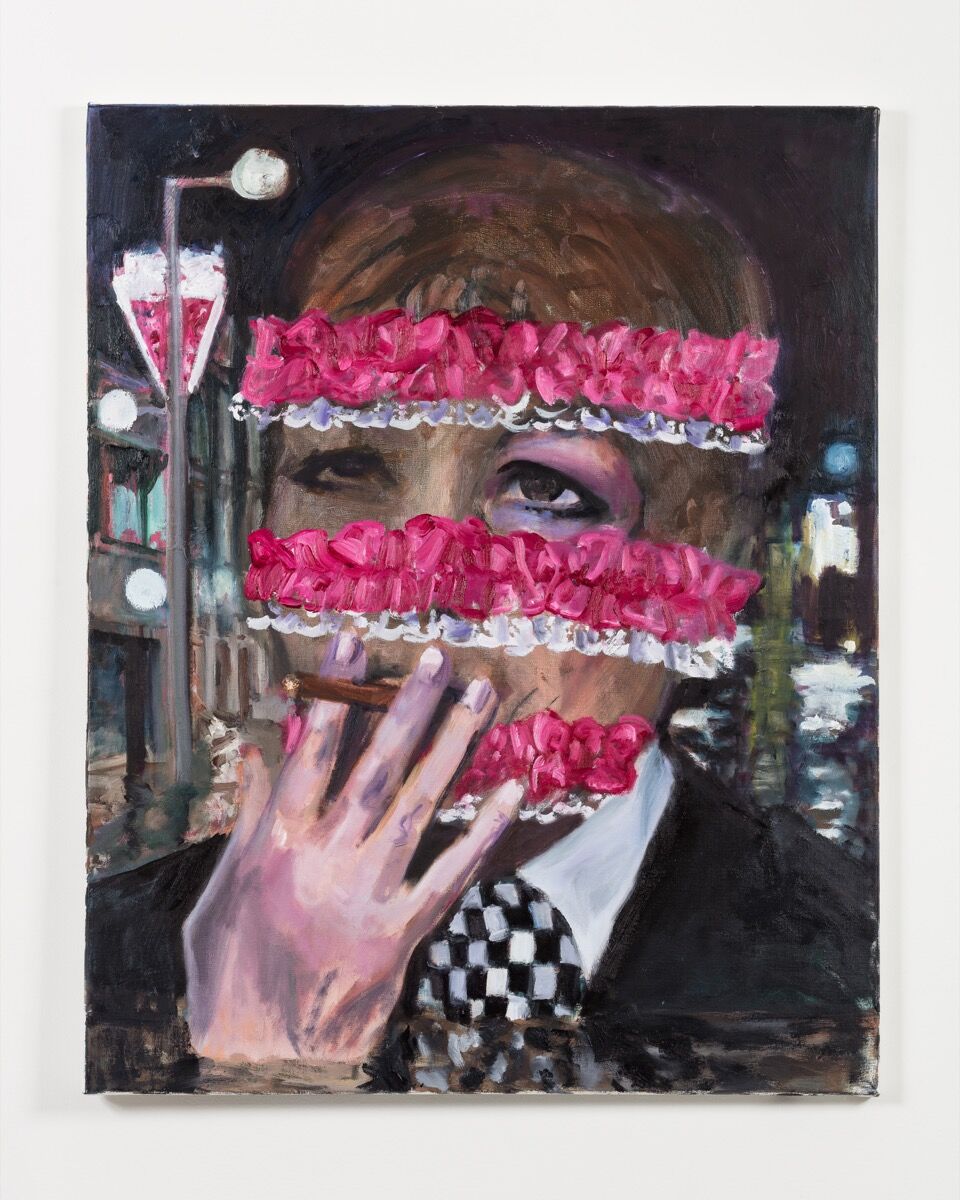 Advertisement
I reached out to Mellor to ask an obvious question: Is she approaching this material as a fan of police procedurals, or from some other position? The artist says she’s “not especially” a regular viewer of these shows. “I grew up with TV as a babysitter, and was aware of the dominance of cop and crime narratives and their popularity as a genre amongst my working-class friends and family,” she explains. “But I’m interested in understanding why they remain popular—and in using cop shows as potential points of access or reference in my work for people who may not usually engage with art.”
As for the range of expressions and attitudes represented in “Sirens,” they’re partly an attempt to draw a sympathetic connection between two unlikely groups: fictional cops and real artists. “I loosely wanted some sense of distress, a general state of emergency and exhaustion,” she tells me. “I see [these policewomen] as workers, and the states they’re in are ones I recognize from people in my own working life—with peers in school, and recent grads working in art jobs who are trapped in precarious labor conditions. I usually watch TV clips and wait for a moment that echoes a temporary subjective emotion of my own, or of someone I care about. This helps me solicit some empathy or recognition that I can counter or transform with the final layer of the painting.” 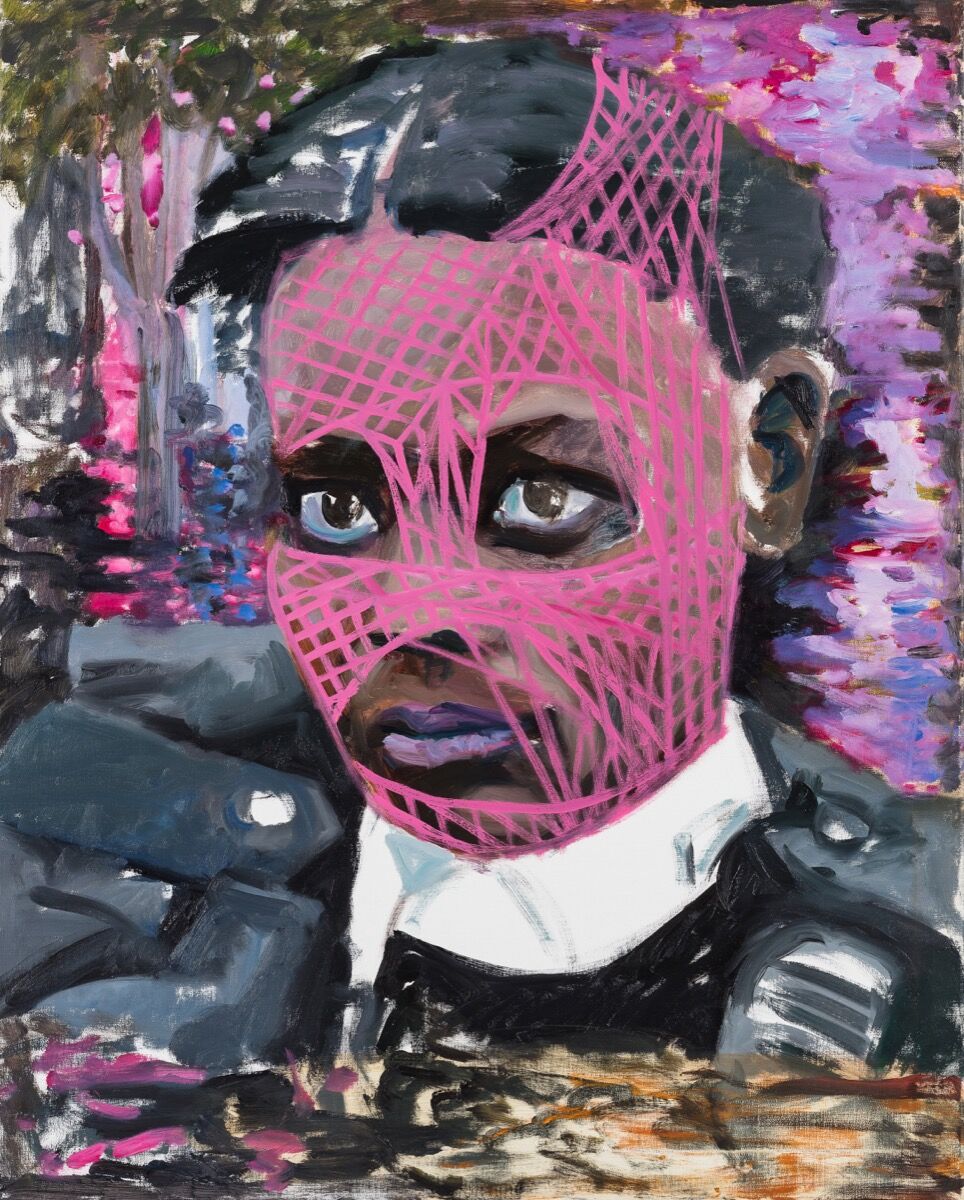 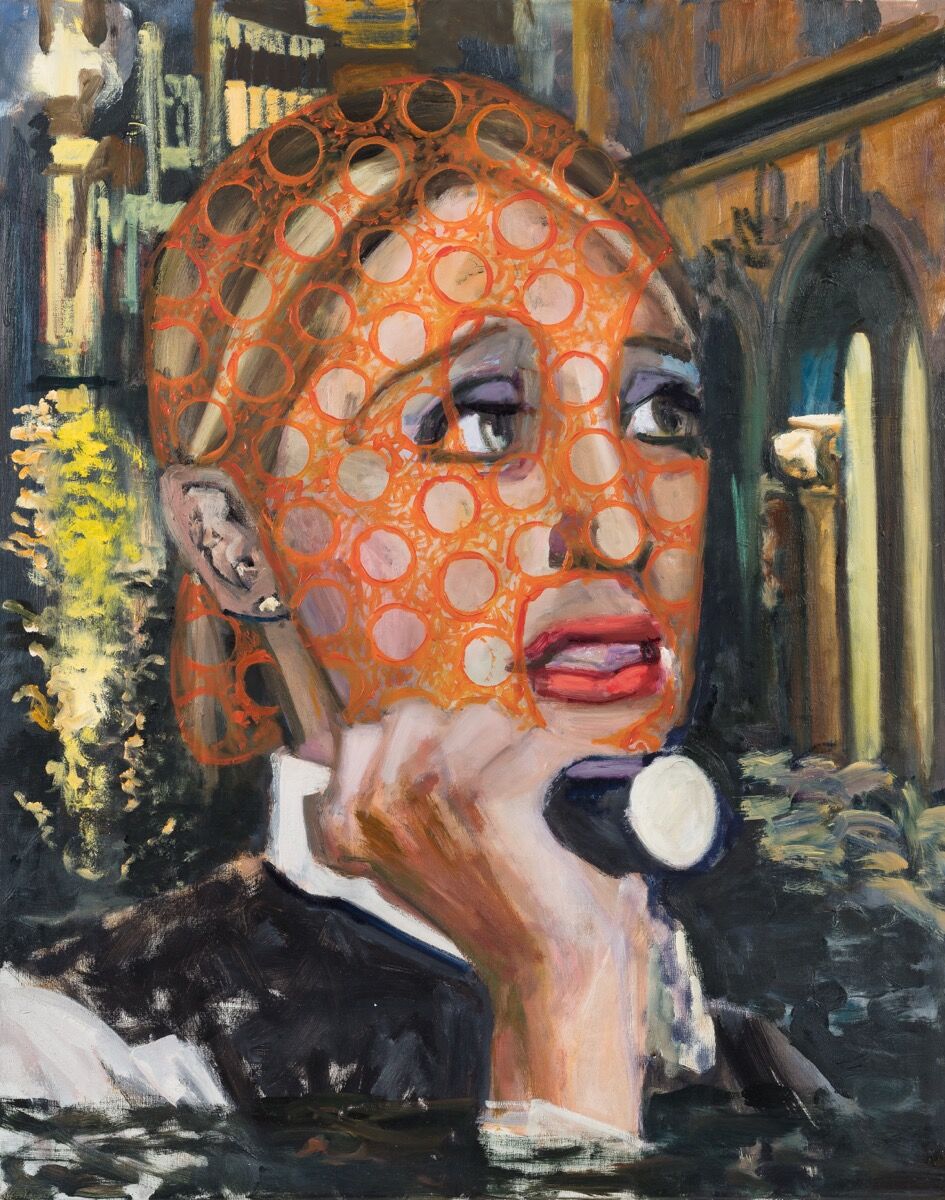 Many of Mellor’s paintings operate on two distinct layers: a realistic, lovingly rendered element of portraiture, and then a scrum of defacement or visual noise thrown on top. A 2010 painting of a young Dustin Hoffman would be pretty straightforward, if not for the marks and scribbles marring his face, and the fact that the artist has scrawled “I won’t pay your price so it’s your turn to run” across his forehead. Often her subjects are besieged by a sort of vandalism that verges on zombification; the aura of celebrity becomes a pall of horror.
She’s comparatively gentle here. But that doesn’t mean Mellor’s “Sirens” get the glamour shot treatment: they’re still saddled with indignity and absurdity. A portrait of Seeta Indrani (playing police constable Norika Datta in the British series The Bill, which debuted in 1984 and ran until 2010) finds her chewing on a rainbow-colored leaf, with what’s either a part of a gun or a camera soldered to her right eye. Connie Hyde, playing police constable Cathy Bradford on the same show, is seen wielding a raised baton, her face overtaken by a bizarre, frog-colored slime.
By hijacking the narratives of a very particular fictional universe—the female-forward police procedural—Mellor manages her own story, one that’s open-ended, all red herring. By closely cropping her subjects, she ensures that we’re missing all the other trappings of cop drama: the crime, the victim, the clues, the catharsis. Instead—like Lolita Chakrabarti, depicted here playing police constable Jamilla Blake—we’ve got one ear curiously pressed against a brick wall, trying to make some sense of what’s on the other side.
Scott Indrisek
Related Stories