01  The 47th edition of Art Basel in Basel opened to throngs of collectors, curators, and others from the art-world establishment on Tuesday.

(Artsy)
The sentiment that these are not times to roll the dice echoed across the fair, especially among dealers on the first floor selling secondary market historical material or pieces sourced from estates that have become increasingly prominent on both gallery rosters and at Art Basel in the past two years. Galleries have also been careful to monitor their outlay ahead of this year’s fair, sourcing secondary market material of living artists for as close to primary market prices as possible to ensure they won’t be left at week’s end holding a cup of froth. The numbers may not be quite as high as in previous years as a result. But, like the recent New York auctions where nearly 60% less art sold by-value in comparison to one year before but with far fewer costly guarantees, the businesses behind the art being sold appear to remain strong thanks to this kind of shrewd dealmaking.

(via artnet News)
According to Investments, the Polish investment site cited by artnet, steadily declining financial conditions at Artnews SA made restructuring unfeasible, and the organization eventually applied for “announcement of business collapse and liquidation of assets.” Newsprint magnate Peter Brant, operating through BMP Media Holdings LLC, has a majority stake in Artnews SA, with 59.5% of shares. Brant’s representatives explained in a statement that BMP Media Holdings had reclaimed four titles—Art in America, MODERN, The Magazine ANTIQUES, and ARTnews—from Artnews SA last month. Currently, “Artnews S.A., which owns Art & Business magazine and Skate’s Art Market Research, has no affiliation with the U.S.–based ARTnews magazine and ARTnews.com, despite their similar names.” The representatives noted that all magazines, websites, and related publications under the umbrella of Brant’s company “will continue as usual.”

03  Istanbul police uncovered 55 stolen artworks and artifacts, together valued at more than $20 million, during a raid on a home in the city’s Ataşehir district.

(via Artforum)
The police’s anti-smuggling force had previously been alerted to the presence of a suspect intending to ferry the cache of stolen art objects out of the country. The smuggler, identified only by the initials M.N.K., had also expressed interest in selling the works to Arab tourists visiting Istanbul. Posing as tourists, the police were able to fake a deal in which they agreed to trade one million Turkish liras for the entire haul. During negotiations, the officers were able to determine the location of the smuggler’s home base, seizing the stolen goods and taking the suspect into custody. A team of experts examined the objects and determined 50 were genuine; of those, 18 paintings were from the hand of 20th-century Turkish painter Nazmi Ziya Güran.

04  Clare McAndrew, the economist behind the influential TEFAF Art Market Report, is leaving the Dutch fair to work with Art Basel.

(via The Art Newspaper)
McAndrew’s annual report on the economic state of the art market is widely considered one of the most important objective surveys of the sector’s health, providing crucial information about auctions, fairs, and private dealers. After eight years working on behalf of TEFAF Maastricht, McAndrew will now publish a visually revamped report under the banner of Art Basel and UBS. Though her methodology will remain generally the same and the report will continue to be independent, McAndrew will now have the option to tap into Art Basel and UBS’s networks, potentially increasing the amount of light she can shed on often underreported private sale transactions. McAndrew said she left TEFAF “on good terms”; Art Basel’s global director, Marc Spiegler cited McAndrew’s tight professional relationship with Art Basel’s Americas director Noah Horowitz as an important part of her decision to join. TEFAF will continue to publish an art market report and the prospect of not one, but two, rigorous and independently produced analyses of the art market is no doubt a positive development for the art world at large.

05  Following a tangled and contentious ownership dispute, Pablo Picasso’s Bust of a Woman (1931) will go to collector Leon Black.

(via the New York Times)
Though a settlement between the parties competing for ownership of the work was announced in May, the details weren’t disclosed at that time. The dispute saw Gagosian Gallery pitted against a representative of the Qatari royal family, who claimed that they had purchased
Picasso
’s sculpture from the artist’s daughter before she sold it to Gagosian for about $106 million. Gagosian purchased the piece on behalf of collector Leon Black. Under the terms of the settlement—the details of which were announced on Wednesday—Black is crowned the legal owner of the bust, while an undisclosed amount of financial compensation will be provided to the representative of the Qatari royal family who contested ownership. “Today’s settlement shows without question that Gagosian Gallery purchased and sold this sculpture in good faith,” said a spokesperson for Gagosian.

(via Page Six)
UTA founded its fine arts division early in 2015, under the direction of art lawyer Joshua Roth. Galleries and dealers, worried that the company’s new branch might serve as competition, reacted to the news with concern—however, UTA has made it clear it has no plans to to sell art. Rather, it hopes to broker deals and negotiate complicated issues of rights and financing that require a high level of expertise. Signing a high-profile artist like
Ai
will no doubt lend credence to the newly minted division. UTA will help distribute Ai’s upcoming documentary, The Human Flow, which focuses on the global refugee crisis. The film will follow on the heels of several works by the artist and political activist that address the international crisis.

07  Protests erupted in front of the Tate Modern earlier this week, challenging Carl Andre’s inclusion in the inaugural exhibition at the museum’s new wing.

(via Hyperallergic)
Some 150 protesters gathered in front of the Tate after walking across London’s Millennium Bridge to chants of “Oi Tate, we’ve got a vendetta—where the fuck is Ana Mendieta?” and “I was pushed—I did not fall.” The slogan is a reference to the suspicious circumstances surrounding the final moments of artist
Mendieta
, who died after plummeting 34 stories from the window of the bedroom she shared with Andre. Following a three-year trial, Andre—who was married to Mendieta for eight months—was acquitted of murder, a verdict that was met with fury by many. The Tate’s new extension will feature work by Andre but not Mendieta, a curatorial decision seen by protest organizers as a glorification of “a violent white man over a dead woman of color.”

08  A long-lost still life by Paul Gauguin has been identified after 30 years hanging in the home of a retired Manhattan antiques dealer.

(via The Art Newspaper)
The retired dealer had no inkling that the work, depicting a vase of vivid red and purple flowers, was part of the 19th-century French artist’s oeuvre. It wasn’t until the painting had been consigned to Litchfield County Auctions that their specialist noticed a Sotheby’s label on the frame. At first, the auction house believed it was the work of
Paul Signac
, but a “PG” monogram soon led them to
Gauguin
. The painting matches a black-and-white photograph of Fleurs D'Ete Dans Une Goblet (1885), pictured in the 2002 Wildenstein catalogue raisonné. It is due to be sold on June 29th, with an estimate of $800,000 to $1.2 million. This follows news in April that a missing
Caravaggio
had been discovered in the attic of a French home—although that work has proved more contentious, with experts divided on its authenticity.

(via The Art Newspaper)
The newly integrated institution will be helmed by Sergei Perov, who is currently the general director of Rosizo. He has expressed an inclination for Soviet art, even launching a campaign in April to spread reproduced works of Soviet Socialist realism across Russia. The culture minister justified the merger, saying that “two similar government agencies, even if they have a high-level of cooperation, are not able to reach their goals as effectively as one big organisation.” However, many have speculated that the decision was motivated by the controversy following performance artist Pyotr Pavlensky’s recent nomination for Russia’s most prestigious art prize. The NCCA’s director announced in February that Pavlensky would be withdrawn from the list of nominees, a decision that resulted in the resignation of several judges and, eventually, the cancellation of the 2016 award.

10  Beijing artist Sun Ping was expelled from the government-led China Artists Association due to his performance work in which a woman paints calligraphy with her vagina.

(via Sixth Tone)
Sun Ping’s expulsion, which the China Artists Association announced via WeChat on June 7th, was sparked by the artist’s ongoing promotion of the work in question, in China and abroad. Featuring a female performer who employs specially designed brushes to create traditional Chinese calligraphy, the video is the latest iteration of this performance, which the artist has been staging since 2006. Shanghai-based online publication Sixth Tone reported that the organization deemed the work “vulgar,” dubbed it “sexual calligraphy,” and expressed concerns over the “adverse effect” it posed to society and its own reputation. Sun Ping told Sixth Tone, “The vagina is too often considered vulgar. But it’s where we all come from,” and explained that he had distanced himself from the organization since 1985, when he joined as a young artist in search of more exposure. This isn’t the first time that the work has ruffled feathers in China: In 2010, Sun Ping’s performance was removed from the “Reshaping History” exhibition at the China National Convention Center in Beijing.
Artsy Editors
Cover image: Installation view of Marian Goodman Gallery’s booth at Art Basel, 2016. Photo by Benjamin Westoby for Artsy.
Related Stories

Ai Weiwei Speaks about His Divisive Responses to the Syrian Refugee Crisis, Lego, and His New Life in Berlin
Advertisement
Further reading in News 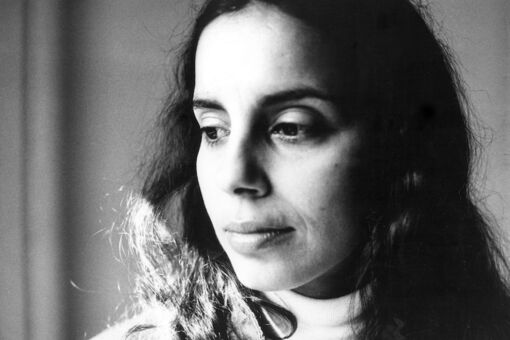 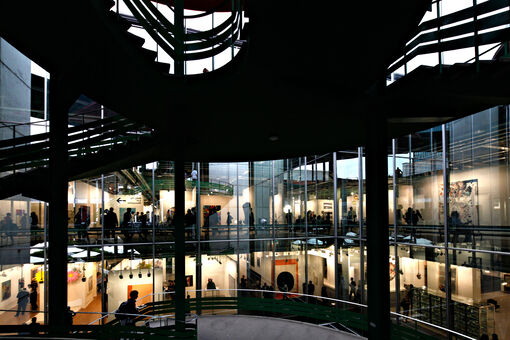 The 10 Most Important Takeaways from the 2016 TEFAF Art Market Report
Alexander Forbes
Mar 11, 2016 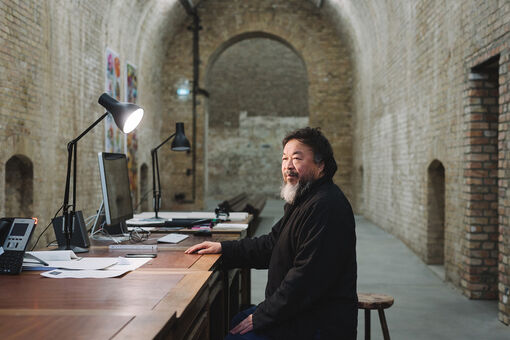 Ai Weiwei Speaks about His Divisive Responses to the Syrian Refugee Crisis, Lego, and His New Life in Berlin
Anna Wallace-Thompson
Feb 8, 2016 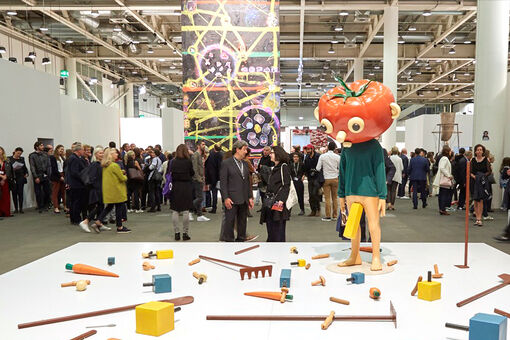