For Dealers of Emerging Artists, LISTE Consistently Pays Off 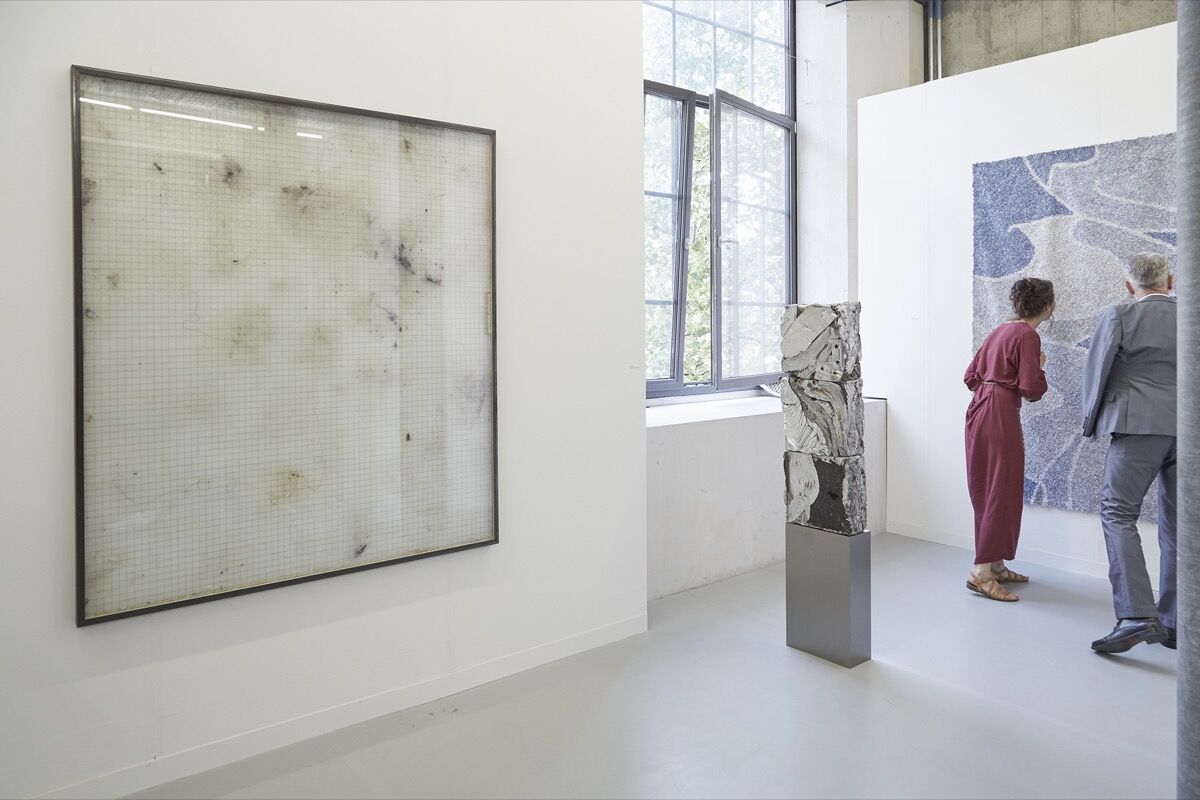 In the precarious life of an emerging gallery, LISTE, the Swiss satellite art fair that runs alongside Art Basel in Basel, is as solid a bet as it comes.
Even at a time of gallery closures, rising fair costs, and a recalibration of the market for artists who are early in their careers, LISTE, which opened on Monday and this year hosts 79 galleries from 34 countries, remains a destination for these young galleries. At LISTE, they know they’ll find not just serious collectors and curators but a sense of camaraderie and collaboration they can’t find elsewhere.
“It has a really different vibe: It’s young and it’s showcasing my peers, my colleague gallerists,” said Leo Xu, founder of Leo Xu Projects in Shanghai, who also shows in Art Basel in Hong Kong and in Miami, as well as Frieze in New York and London. And, of course, “It’s affordable.”
Xu’s booth had two works by
Liu Shiyuan
, an installation on an iPad and a “carpet room.” Both were originally produced for Frieze New York in 2016. He said the response from institutions at LISTE had been enthusiastic. 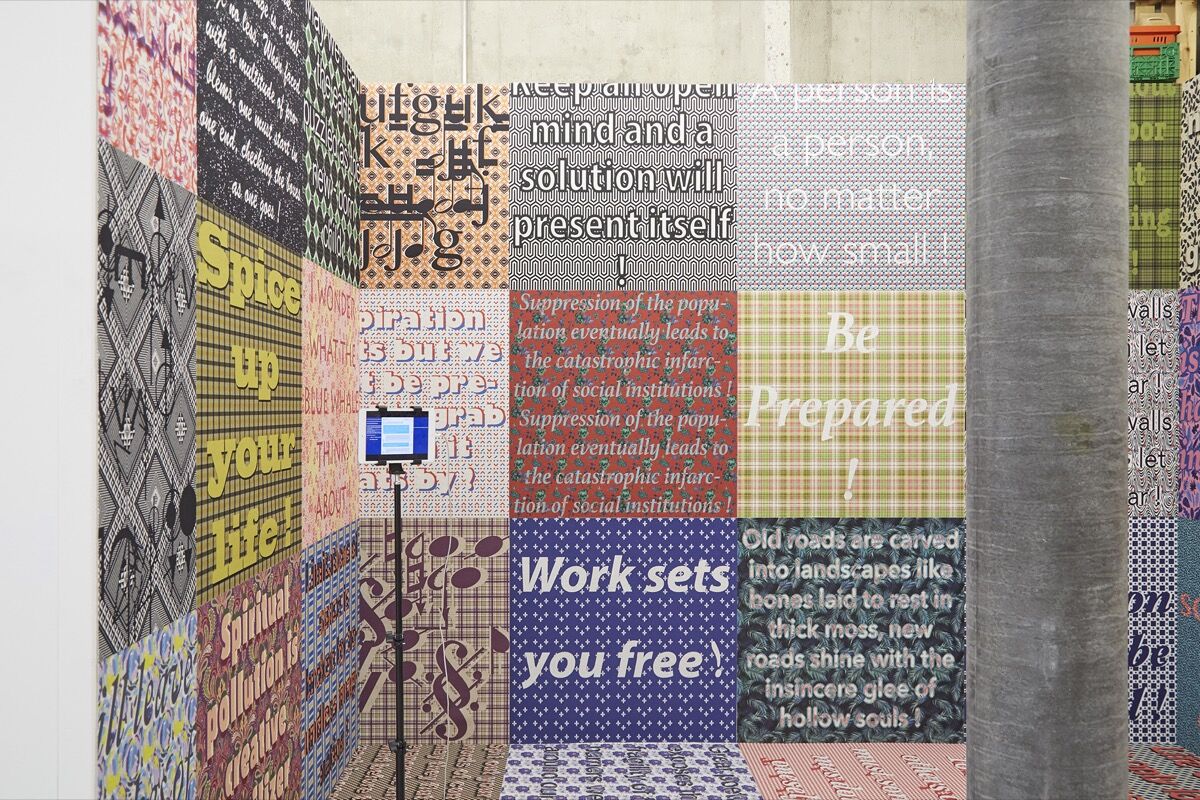 Jeremy Parker of Project Native Informant said the camaraderie was also a necessary business strategy for young galleries, who often share artists and, ideally, share collectors. That high value placed on collaboration is another way that galleries can support each other in a challenging market environment, he said.
“Among the younger galleries, there’s a lot of crossover with artists,” he said. “People will help each other out; they’ll send collectors to another booth if they think they’ll be interested—that’s really essential.”
On opening day, his gallery sold two paintings by
Juliana Huxtable
(one of which was pre-sold), a trans artist whose work addresses gender identity and fluidity, and several paintings of computers by Scottish artist
Morag Keil
. Prices at the booth ranged from $4,000 to $15,000. 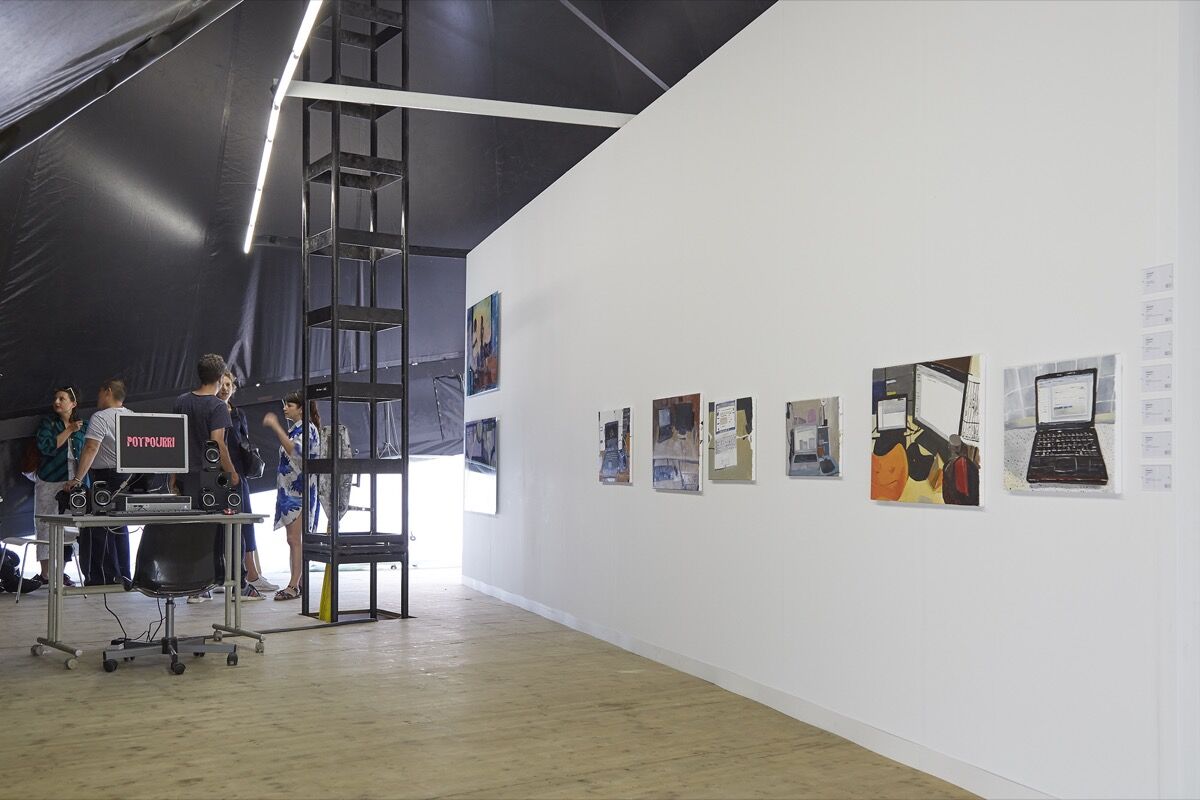 Advertisement
Parker also nodded to the unconventional setting of the fair, which he said encourages galleries to “do something a bit more ambitious” with their programming. It’s held in an abandoned brewery that stretches over five floors, interrupted by a shaded roof cafe and restaurant. Traversing the fair requires navigating metal stairways inside and outside of the edifice, searching out hidden corners of the edifice, and weaving in and out of hallways and rooms—a far cry from the orderly rows and aisles of your average large fair.
“It feels so relaxed and unkempt, you really have discoveries here, fresh voices,” said Dorothy Kosinski, director of the Phillips Collection in Washington, D.C.
Isabella Anna-Maria Ritter, co-director of LambdaLambdaLambda, a two-and-a-half-year-old gallery in Prishtina, Kosovo, agreed.
“It’s a good space, it’s not that fair atmosphere that you have in big commercial fairs—it’s more charming to be in a normal building,” she said. At her booth, works by three artists—Tatjana Danneberg, Hanne Lippard, and Dardan Zhegrova—were priced between €1,500 and €6,500. Ritter had sold several works by afternoon of opening day, characterizing collector appetite as roughly on par with what it was last year, her first year in the fair.
Those consistent sales enable her gallery, which is located in a country with an extremely limited art market, to keep the lights on.
“There’s no market [at home],” she said. “We are building it up at the moment…but we are really dependent on fairs,” adding that sales at LISTE were less volatile than at other fairs. 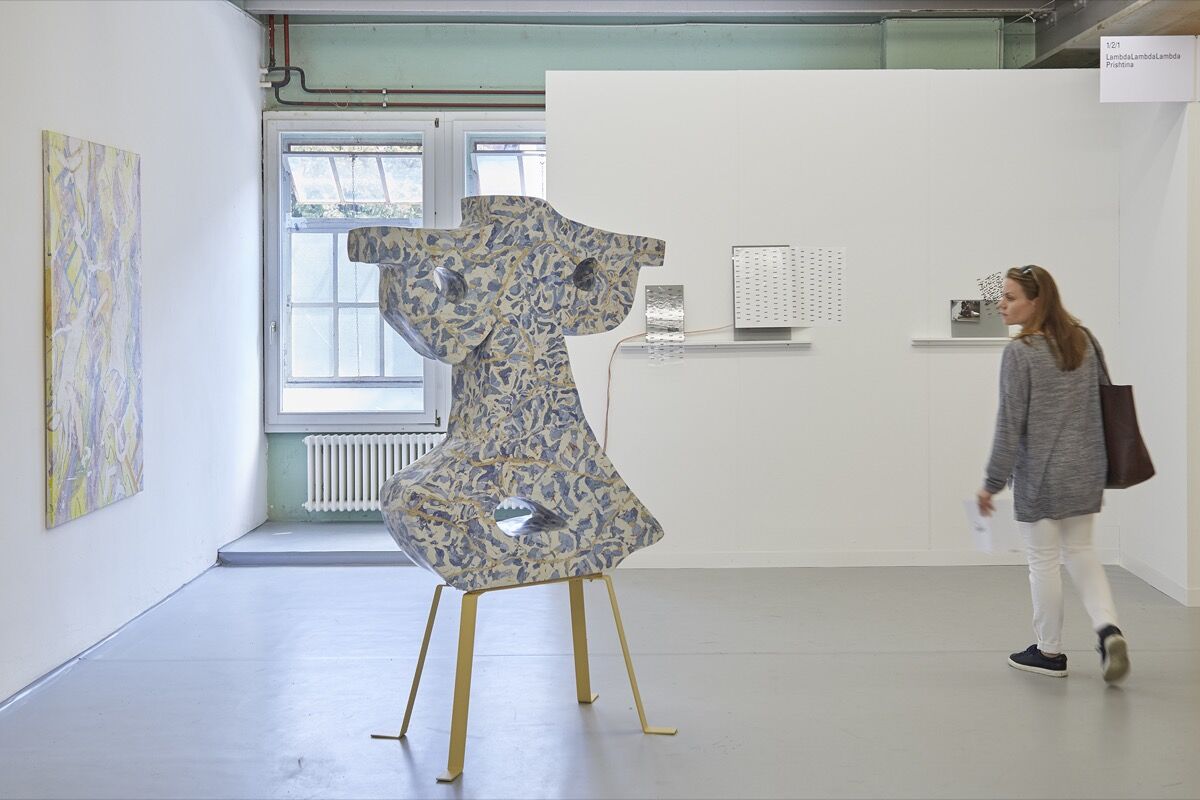 Installation view of LambdaLambdaLambda’s booth at LISTE, 2017. Photo by Benjamin Westoby for Artsy.

Sales across the art market have contracted for two consecutive years. But the greatest volatility at the lower end of the market, for works by emerging artists, in that period has been isolated to a particular brand of abstraction now derided as “zombie formalism.” Because their programs did not include those, mostly male, painters, many dealers at LISTE said they had therefore avoided the most pronounced swings in the business cycle.
“We never had the bubble, so we never had the dip,” said Will Jarvis of London’s The Sunday Painter. “We’ve only ever been growing.”
His gallery was appearing at LISTE for the second time, showing
Samara Scott
’s sections of shower units, backed by an assemblage of consumer detritus. Collectors posed in front of them for selfies, as sun shined through the works, giving them the appearance of post-modern stained glass windows.
The sun was proving a boost for sales, Jarvis said, compared with last year, when the weather was decidedly more dreary.
“It’s not raining,” he said, “That helps a lot—you’d be surprised.” He also attributed the strong reception to showing a more well-known artist than he did the previous year, noting Scott’s avid following. More than one of the sculptures had sold by the mid-afternoon of opening day, priced on the range from £10,000 to £14,000. 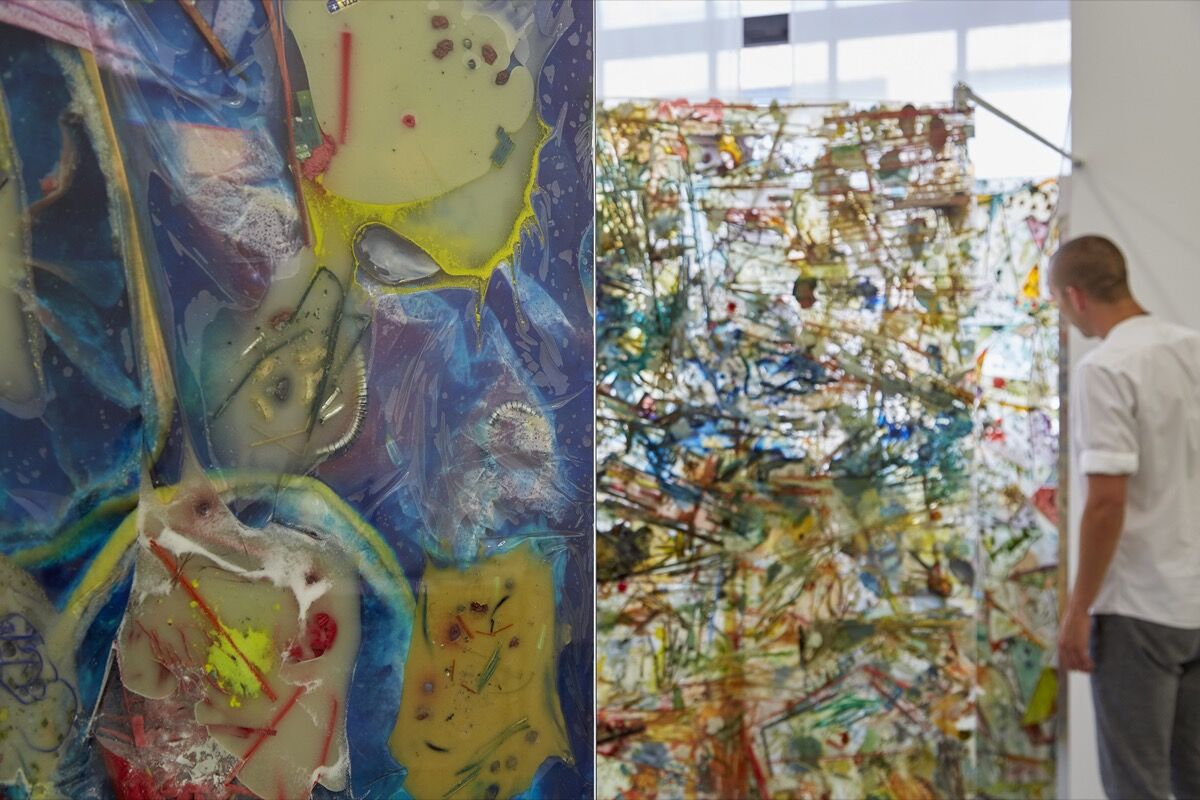 Installation view of The Sunday Painter’s booth at LISTE, 2017. Photo by Benjamin Westoby for Artsy.

Rózsa Zita Farkas, founding director of Arcadia Missa in London, had a similar experience. Many of her artists are women, few of them paint, and many of them work in video, meaning her roster also lies largely outside of the speculative frenzy of 2014 and 2015. Now, she said, she senses more of an appetite from collectors for the politically engaged or more challenging work she shows by artists such as
Hannah Perry
,
Hannah Black
, Maja Čule, and
Amalia Ulman
.
Arcadia Missa entered the market at the tail end of 2014, having been a non-commercial project space until then. LISTE was one of the first fairs Farkas applied to; accepted on the first try, she barely had enough money to attend, but friends insisted she go based on the fair’s stellar reputation. Even this year, she and her team saved money by installing the whole booth themselves (instead of hiring a technician), and she plans to return the flat-screen televisions on which the videos were running once the fair was over and she is back in London.
That helps her keep prices within an an accessible range for young collectors: under £1,500 for a drawing and up to £4,500 for a video, and some large wall pieces for just under £10,000.
“Even though it’s grueling having a seven-day fair, it’s worth it—people come by every single day,” she said. “All the curators come, just because big Basel happens at the same time.” 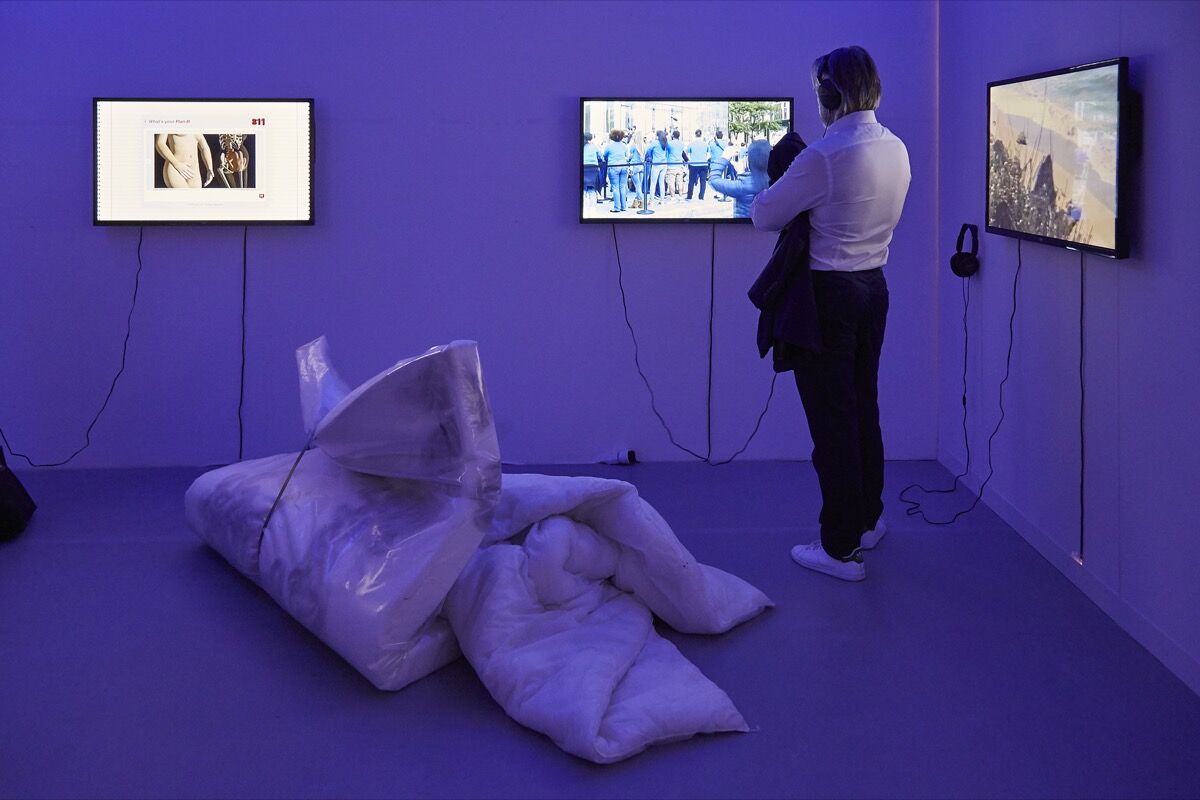 At C L E A R I N G, which has outposts in Bushwick, New York, and Brussels, a lower price point kept the sales pace brisk. Gallery founder Olivier Babin said LISTE was always a good fair, but this time the booth was specifically stocked with works under $10,000, all by American artist
Zak Kitnick
.
“Especially at an art fair, it makes the decision-making quicker,” said Babin. “You don’t have to call your banker or your wife, you can just get it.”
“The works are not enormous, and the booth costs are reasonable, especially compared to other art fairs,” he said.
The gallery also participates in the sections of Art Basel’s Miami and Hong Kong fairs dedicated to emerging galleries, as well as in Frieze New York and Frieze London, Independent in New York, and several others—nearly one fair a month, according to C L E A R I N G’s Lodovico Corsini.
“We’re a young gallery, and first of all we owe our artists a certain visibility,” he said. 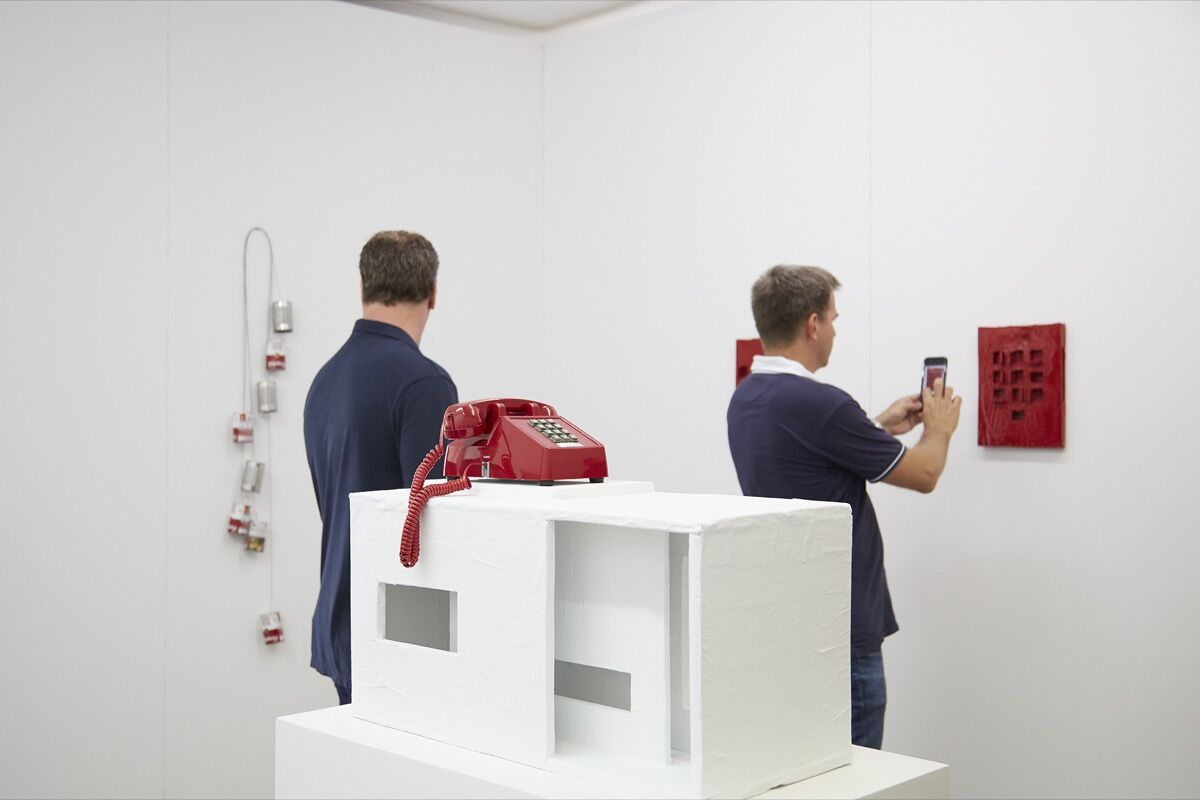 Installation view of C L E A R I N G’s booth at LISTE, 2017. Photo by Benjamin Westoby for Artsy.

LISTE’s organizers are trying to keep the fair affordable and the risks low for young galleries by soliciting donations. A new program launched this year, Friends of LISTE, asks patrons to contribute so the fair can continue to serve as a launching pad for new galleries, many of whom have gone on to much fame and fortune (David Zwirner, neugerriemschneider, and Maureen Paley all famously showed at the fair’s inaugural edition, in 1996).
Guillaume Sultana, who runs Galerie Sultana in Paris and also founded the invitation-only Paris Internationale art fair, said that was key as fair costs climb and young galleries have to be more and more strategic.
He was at LISTE browsing rather than dealing, opting this year to participate in fewer fairs and try alternative models such as CONDO, a kind of pop-up gallery model first launched in London that will see galleries from around the world set up shop in the New York spaces of their peers for just over a month, starting at the end of June.
“It’s time-consuming and it’s energy and it’s money,” he said, of attending fairs, but added that LISTE was an exception. At big art fairs, he said, it’s very difficult for young galleries to be visible, but it’s also too expensive for them to participate in the main section.
LISTE provides a happy medium—a place just for galleries going through the same growing pains and sharing the same successes: an artist prize here, an institutional acquisition there.
“It’s a really good community of young galleries here who support each other a lot,” said Project Native Informant’s Parker. “There’s good camaraderie, a good feeling about how it all works.”
Anna Louie Sussman
Related Stories