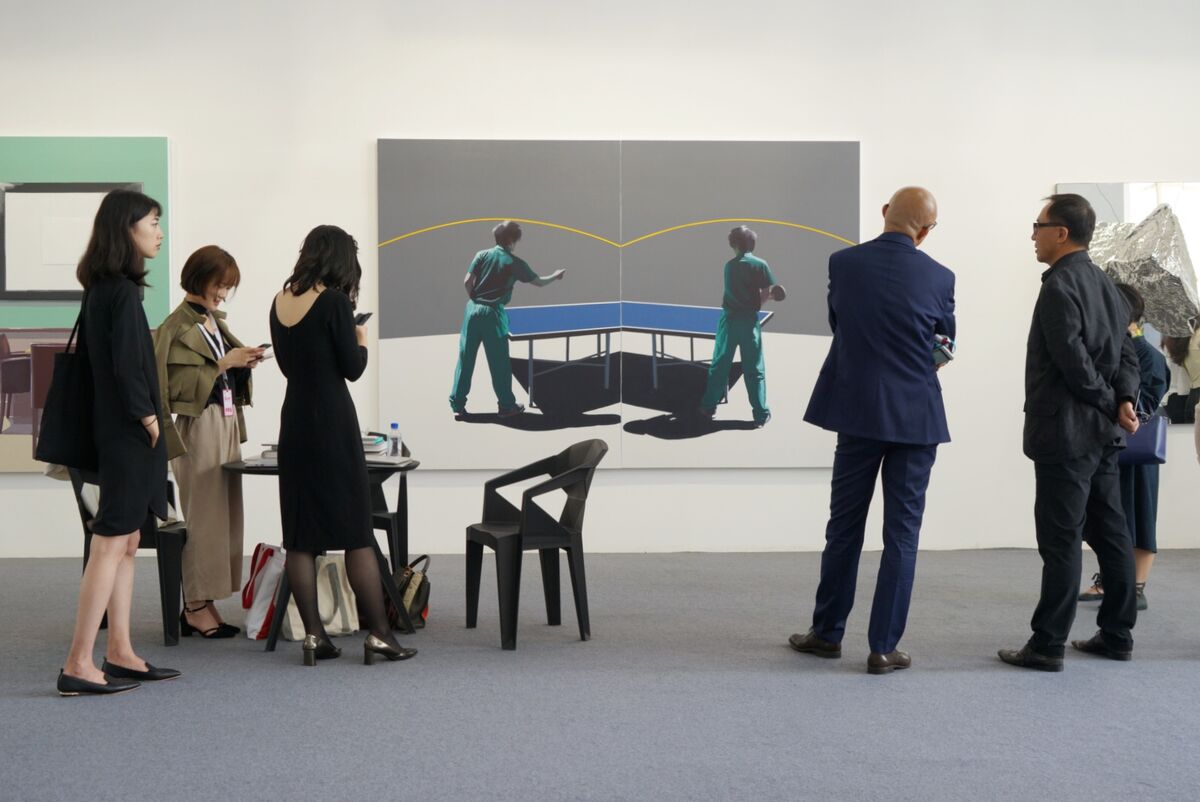 For three days last week, a large LED screen in the midst of a spacious pedestrian zone near the Chunxi Road Metro station in Chengdu, China, broadcast a string of celebrities, including Chinese actress Fan Bingbing, all repeating the same tagline: “Chengdu loves art; art loves Chengdu.” The screen was attached to one of two tents erected in the midst of this, the fast-growing city’s commercial center, which typically caters to its many newly-rich residents with luxury fashion. This week, however, the focus here was on contemporary art.
Those three days marked the first edition of the Art Chengdu International Contemporary Art Fair. A mix of 31 well-known Chinese and international dealers set up shop in this pair of tents in the heart of the capital city of Sichuan, a province located in southwest China that is home to the giant panda and famous for its spicy hotpots that numb the mouth. Soon, the city might also claim a special place in the art world.
“Chengdu has a lot of collectors, and there are great museums and galleries,” said Chengdu native Huang Zai, who, with Sichuan collector Huang Yu, founded Art Chengdu. “But we felt that we needed something new, a new platform that could bring everyone together, connecting collectors, artists, and gallerists. There is a need for an art fair here.”
Huang Yu has collected art for the past decade, and he was staging an exhibition of his holdings at the Museum of Contemporary Art Chengdu in 2016 when he got the idea to launch an art fair in the city. The former bodybuilding champion, who graduated from the Chengdu University of Technology, said he had thought about opening his own private museum, but decided he wanted to have a broader impact: supporting artists, other players in the art market, and the city of Chengdu itself by raising the city’s profile internationally and creating an ecosystem that supports artistic development in the western part of China. Huang Yu’s long-time friend Huang Zai—who is an art advisor and organizes art world events, and is also the daughter of Chengdu artist Huang Mingjin—was quick to join the effort. Huang Yu said he hopes Art Chengdu can help the city’s many local artists gain greater exposure by bringing in international galleries. One of China’s oldest cities (with history recorded as far back as 311 BC), Chengdu has long been an important base for important
Chinese contemporary art
movements such as scar art and xiangtu yishu (native art), which were spearheaded by artists who graduated from the Sichuan Fine Art Institute in the neighboring city of Chongqing. It also has a burgeoning museum scene: In addition to public institutions, a number of private museums have opened up, such as the A4 Art Museum, which currently hosts a solo exhibition of Turner Prize-winning artist
Martin Boyce
, and the Zhi Art Museum, which debuted its
Kengo Kuma
-designed building in 2011.
Chengdu’s increasingly bustling cultural sphere—and exhibitor interest in Art Chengdu—has been fueled by breakneck economic growth. The Milken Institute, an independent economic think tank, ranked Chengdu as China’s top-performing city last year in a report analyzing economic dynamism across the nation (nearby Chongqing took the number-two spot). Chengdu had China’s eighth highest GDP, with 1.39 trillion yuan ($219 billion) of economic output in 2017. Importantly for the art industry, it ranked in an even-better fifth spot among Chinese cities in terms of spending power, with retail sales of 311.9 billion yuan ($49 billion) recorded from a population of more than 14 million last year.
The city has served as a manufacturing hub for some time, but has drawn further interest from international companies and investors, as well as property developers from Hong Kong in recent years. China’s One Belt One Road initiative, which aims to create greater economic linkages between China and other Eurasian and African countries, has set out the development of interior cities like Chengdu as a core element of its strategy. For example, the two complexes—the International Finance Square (IFS) and Taikoo Li—between which Art Chengdu’s two tents were erected are operated by Hong Kong developers The Wharf (Holdings) and Swire Properties, respectively.
For its newcomer status and relatively small scale, the fair brought in a surprisingly strong lineup of top galleries both local and foreign, including AIKE, Beijing Commune, Long March Space, Lin & Lin Gallery, Tang Contemporary Art, White Space Beijing, Galerie Urs Meile, and ShanghART. Then again, the fair’s founders made it very easy for galleries to say yes to participating: In a fairly unheard-of move, galleries weren’t required to pay anything for their booths. Huang Zai said this decision was motivated by her and Huang Yu’s interest in getting the best possible exhibitors for the inaugural edition of the fair.
“A lot of people are still not familiar with Chengdu, thus we invite them to come. We want to be able to choose the kind of galleries we want,” she said. 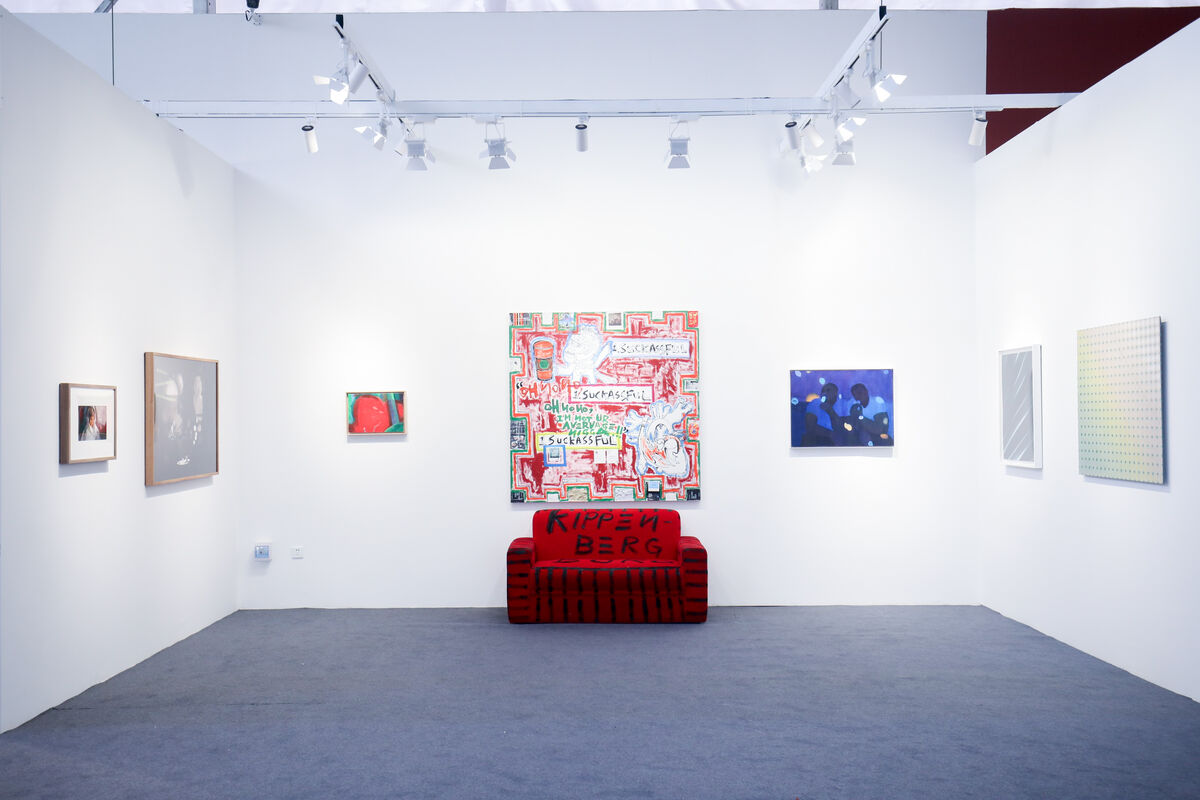 Advertisement
A number of notable collectors from Beijing, Shanghai, Hong Kong, and abroad flew in as a result, including Frank Yang, David Chau, Qiao Zhibing, Li Bing, and Lu Xun. Some gallerists who didn’t participate this time—like Anthony Tao from Hong Kong’s Gallery Exit, and Leo Xu, director of David Zwirner’s Hong Kong outpost—were also seen in Art Chengdu’s aisles, clearly scoping it out to see what they’d missed. Most galleries that did participate this year reported sales that were satisfactory or better. Likely among the most expensive works sold was the sculpture Scaffold V (2017) by
Antony Gormley
at Galleria Continua, which the gallery said went to a collector from the region.
An interest in expanding from the traditional contemporary art hubs of Beijing, Shanghai, and Hong Kong drove a number of international galleries to try out the new fair. Among them was Berlin-based Peres Projects, which sold three works by
Donna Huanca
, who is currently having her first solo show in mainland China at Yuz Museum in Shanghai. Director Nick Koenigsknecht said his gallery “[wants] to engage” outside of the tried and tested territory in China’s east.
London-based Sadie Coles HQ sold works on paper by
Urs Fischer
and
Paloma Varga Weisz
, respectively, as well as
Jim Lambie
’s Metal Box (Bucharest) (2018). The gallery’s associate director, Kate Wong, said that compared to Beijing and Shanghai, the crowd at Art Chengdu was much more relaxed and laid back. But, she said, that the collectors were also surprisingly high quality. “No one touches the artworks,” she said, an issue that often befalls galleries at fairs across the region, including Art Basel in Hong Kong.
Pace Gallery, which has spaces in Beijing and Hong Kong, sold a work by
Song Dong
for $58,000 and an installation by
Maya Lin
for an undisclosed sum. Ink Studio from Beijing also did well, selling a large ink work by
Li Huasheng
for $125,000, among other works. Ink Studio founder and director Chris Reynolds said Chengdu reminds him of Hong Kong ten years ago.
“There is so much money and potential for art appreciation and collecting,” he said. 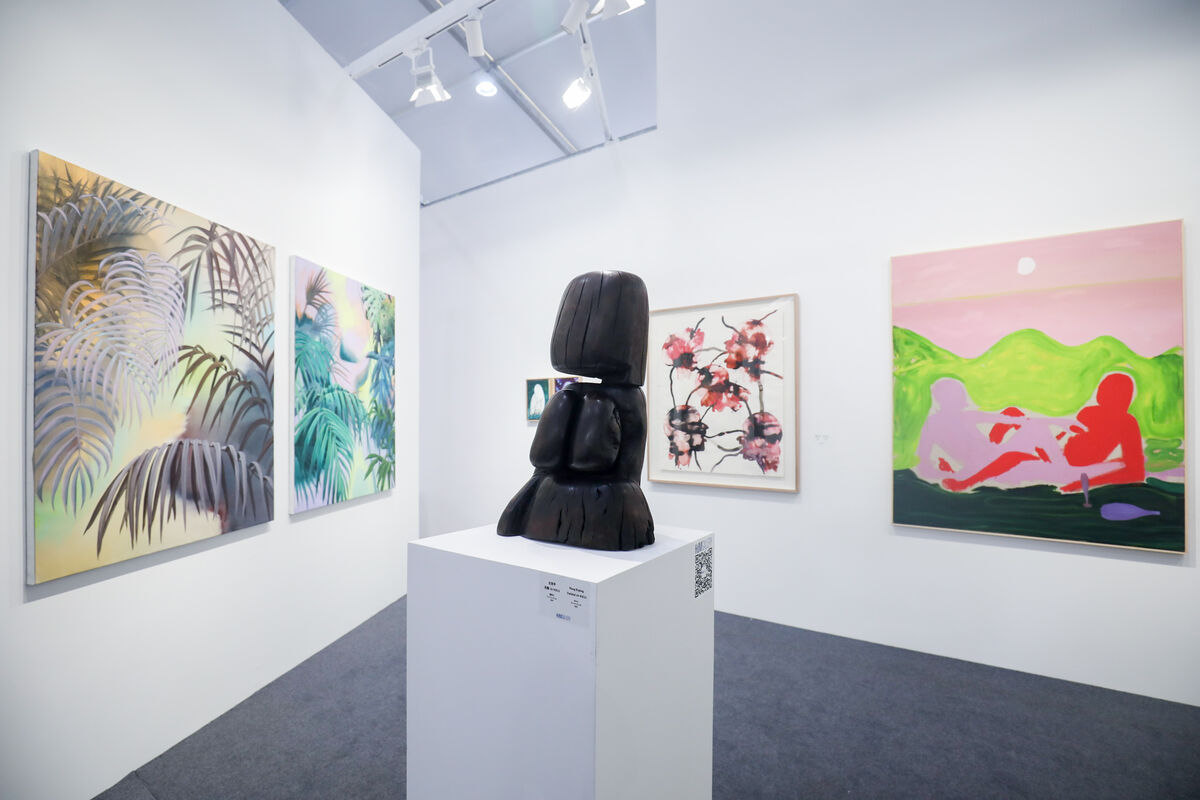 Only one Chengdu-based gallery, A Thousand Plateaus Art Space, was on the exhibitor list this year. The gallery divided its spacious booth into two rooms, the first of which displayed realist paintings, including a work by
He Duoling
, a father figure of the Chengdu art scene, which sold for 5 million yuan (approximately $800,000) to a long-time local collector. The other room featured more abstract and conceptual pieces by artists including
Wang Chuan
and
Aaajiao
. Director Liu Jie said that he wants to fair to succeed, so he brought the best and most diverse range of works he had available in order to impress the crowd. Due to China’s vast scale, he said that there is plenty more room for new fairs like Art Chengdu, which he thinks “will have positive impact on the city’s artistic development because it brings people together and boosts exchange.”
Olivier Hervet, who serves as the director of HDM Gallery’s Hangzhou branch, agreed about Art Chengdu’s potential. He had sold six works as the fair wound down on Friday—including two each by
Chao Lu
and
Xie Lei
, and one by
Barthélémy Toguo
—to a range of buyers, including French collectors based in China; a Belgian who’s based in Hong Kong; and a handful of Chinese buyers.
“There is a lot of potential here, and there’s a lot of room for growth,” he said.
Vivienne Chow
Related Stories