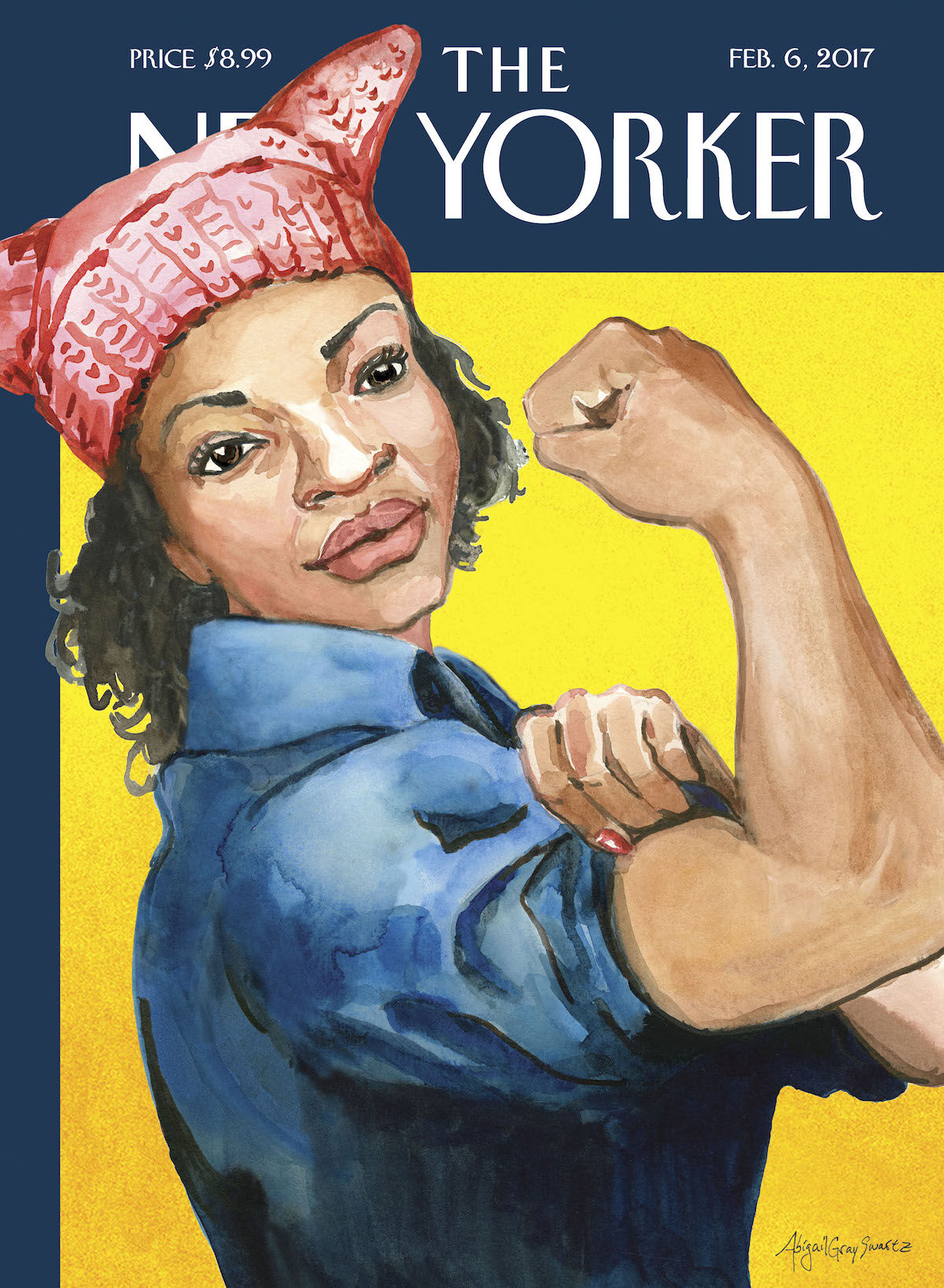 “The March,” by Abigail Gray Swartz, February 6, 2017. Courtesy of The New Yorker. Used with permission. 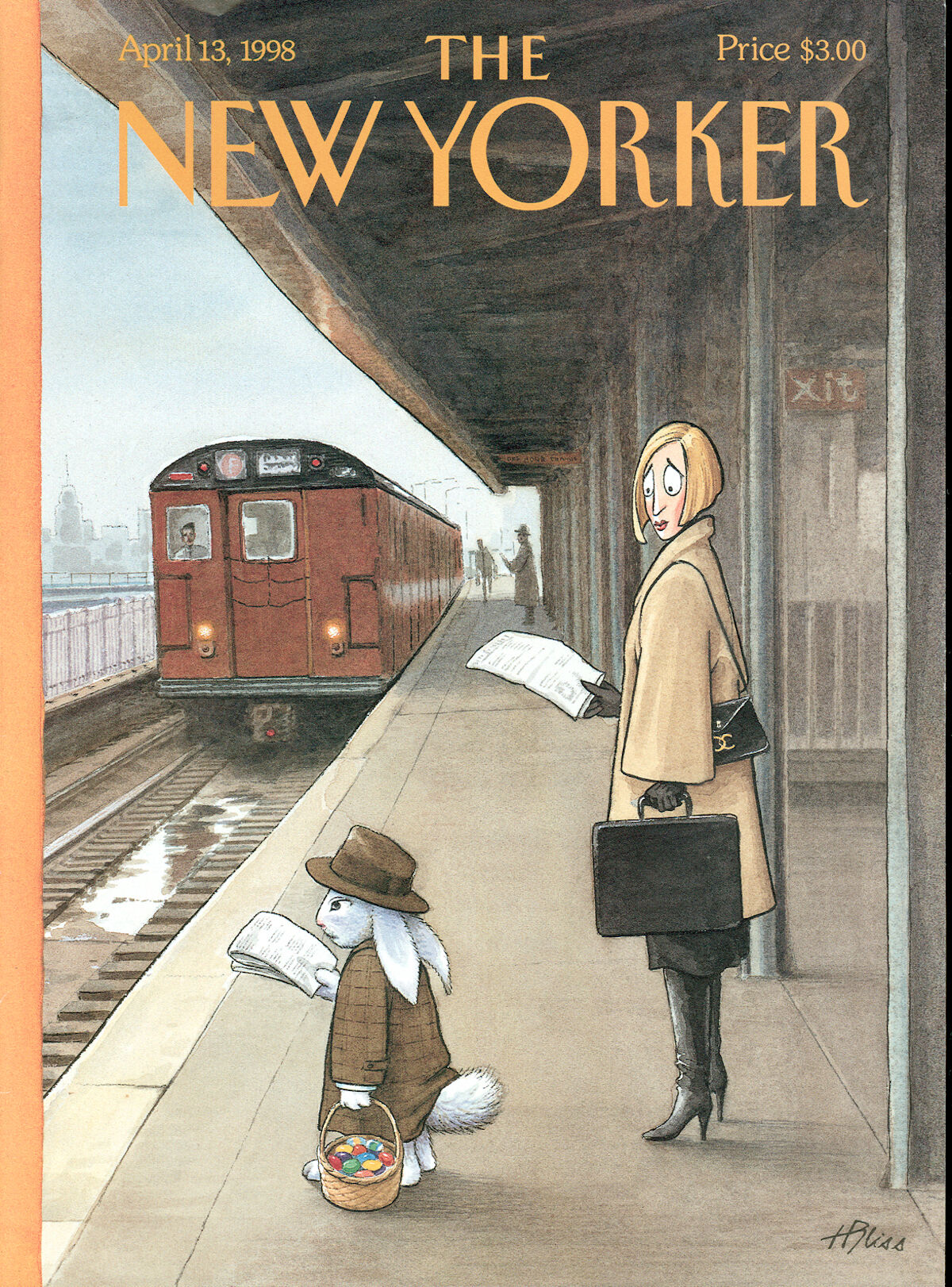 “Another Day, Another Egg,” by Harry Bliss, April 13, 1998. Courtesy of The New Yorker. Used with permission.

Take a snapshot of the average crowd waiting on a New York City subway platform and chances are it will be roughly split between women and men. But in April 1998, when the cover of the New Yorker magazine depicted a woman on the platform, holding both a Chanel bag and a briefcase on her way to work, it was a quietly revolutionary moment for women.
“We had gotten to the point where you can make it a woman and it’s not about the fact that she’s a woman,” said New Yorker art editor Françoise Mouly in a recent conversation with her daughter, writer Nadja Spiegelman, at the SoHo boutique of designer Rachel Comey in New York. Mouly noted that the original submission had shown a man waiting for the subway, but she thought, why can’t this be a woman? Women wait for the subway, too.
Against a backdrop of near-daily sexual harassment revelations and a broader reckoning with questions of gender, power, and the media, the pair discussed the evolution of women on New Yorker covers throughout the magazine’s 92-year history. From a World War II drawing of women socializing in a factory to the nearly published image of Hillary Clinton as the would-be first female president of the United States, the roughly 50 covers they presented reflect the magazine’s ability to mirror cultural change, challenge convention, and normalize new ideas.
To find images of women, Mouly and Spiegelman sifted through the New Yorker’s archives—which span more than 6,000 covers, each labeled by category. They focused on certain categories—including weddings, mothers, servants, literary life, love—and bypassed others such as politics, hunting, sports, or technology, which historically depicted few, if any, women. 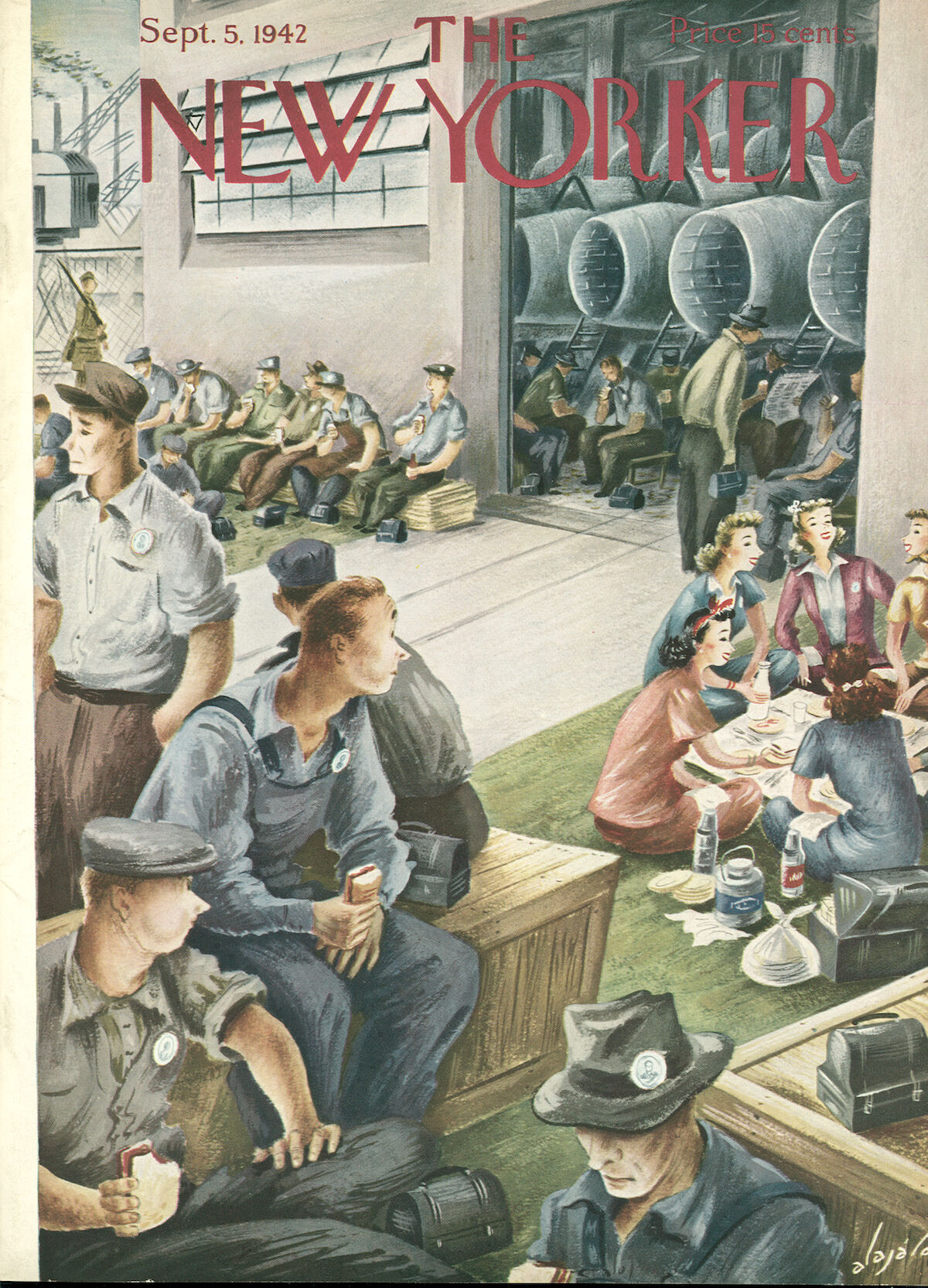 “September 5, 1942,” by Constantin Aladjalov. Courtesy of The New Yorker. Used with permission. 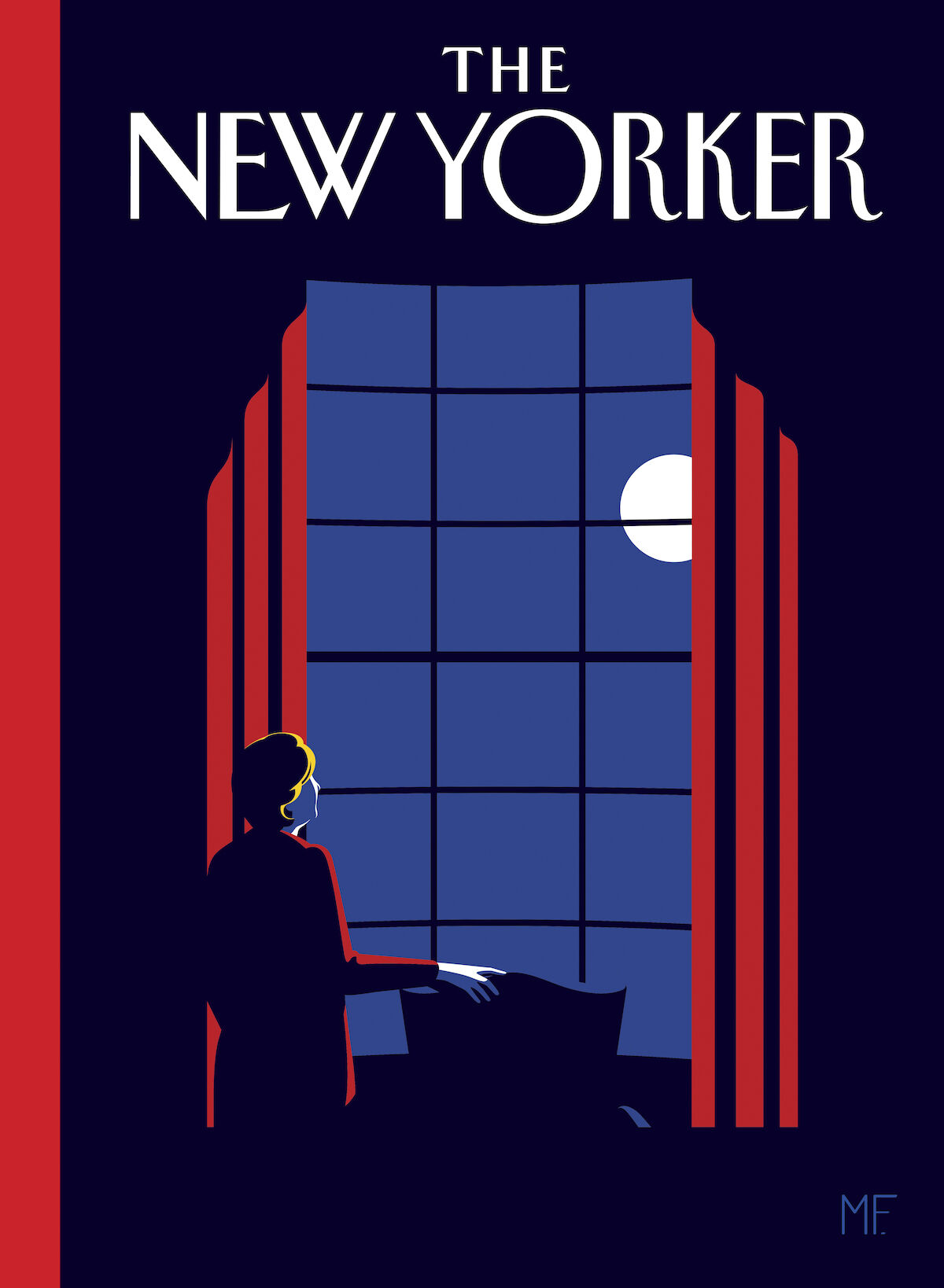 “The First,” by Malika Favre. Courtesy of The New Yorker. Used with permission.

Among several images dating back to World War II, Mouly showed a 1941 illustration by artist William Cotton, in which a group of young women escorted by a chaperone, their eyes wide with fright, encounter a group of ogling sailors. Like many other covers at the time, the image portrayed young women as fragile and in need of protection. It is a joke about sexual harassment, said Mouly, but “the joke is on the fear of the girls, not the interest of the boys,” added Spiegelman.
Even as women began to enter the workforce to aid the war effort, New Yorker covers continued to show them as helpless, incapable, or domestic. While a government campaign encouraging women to enter the factory workforce promoted feminist icon Rosie the Riveter, whose likeness, dressed for work in coveralls and a red bandana and showing off her flexed muscle, was reproduced all over the United States, the New Yorker’s version, a 1943 illustration by Rea Irvin, showed a pampered woman clad in fitted coveralls, the bandana in her hair tied in a bow, admiring her reflection in a hand mirror while her maids straighten her bow and bring her a toolbox and gloves. The image fell back on stereotypes about women, rather than their lived realities as factory workers and in other home front jobs, such as flying military airplanes, driving trucks, and operating hydraulic presses.
Irvin’s cover embodied “all of the prejudices and preconceptions that are so deeply seated and so ambient that we barely notice them,” Mouly said.
Fast forward some 75 years to Abigail Gray Swartz’s illustration of Rosie the Riveter as a strong black woman, published on the cover of the February 5, 2017, issue to celebrate the Women’s Marches of January 21, 2017. It shows Rosie clenching her bicep and donning a pink Pussyhat, the knitted caps that became a sign of women’s dissatisfaction with the election of Donald Trump as U.S. President.

Images of mothers also evolved to convey a more egalitarian and inclusive understanding of parenthood. A 1942 image shows a young, upper-class bride riding in the back of a cab as she looks out the window, in visible horror, at a large brown-skinned family. Even in 2000, an image by Carter Goodrich shows a figure who represents Mother Nature, seated with her four children, as a sad professional woman clutches her briefcase, contrasting women’s “natural” function with a woman pursuing a career. And as recently as 2008, an illustration by Barry Blitt shows a woman staring longingly at babies romping like puppies in the window of a pet store as her husband drags her away, an image that already feels dated, given men’s growing embrace of fatherhood.
More recent New Yorker covers have expanded our visual vocabularies with a broader scope of images of mothers, especially working mothers. The most powerful image—Hillary Clinton assuming her post in the West Wing—never made it to print, but other, more subtler ones, have shown us that there is no single mold for a parent, and that women’s identities can extend far beyond their role as a mother. For example, a 1998 cover by Mouly’s husband and Nadja’s father, comics legend
Art Spiegelman
, shows a woman in a hard hat and work boots, proudly breastfeeding at a construction site. The image challenges us to reconsider what for so long has been the collective archetype of the workers building our skyrises—the famous 1932 shot of 11 male ironworkers breaking for lunch along a steel beam some 800 feet high in the sky while building New York’s Rockefeller Center. 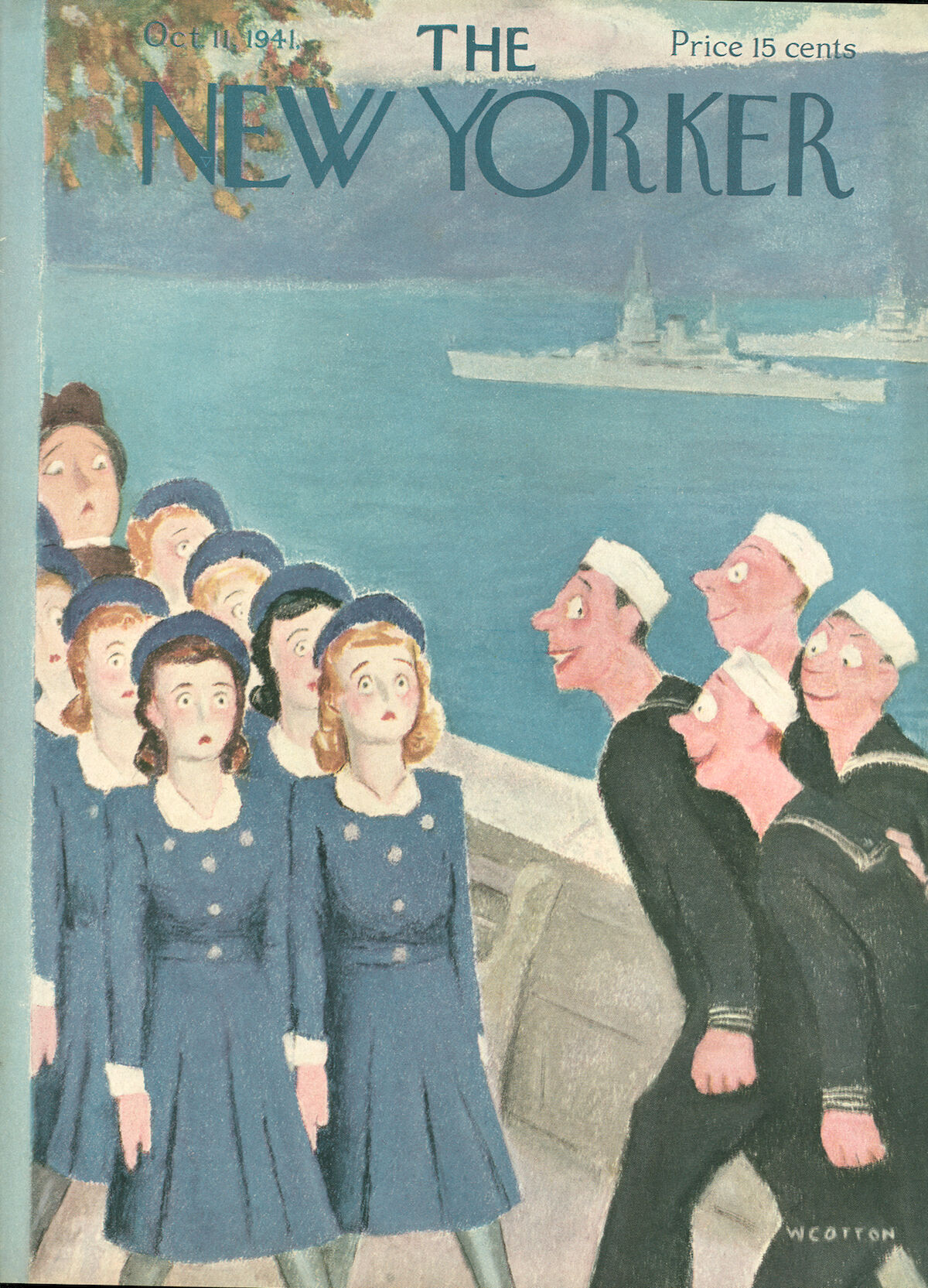 “October 11, 1941,” by William Cotton. Courtesy of The New Yorker. Used with permission. 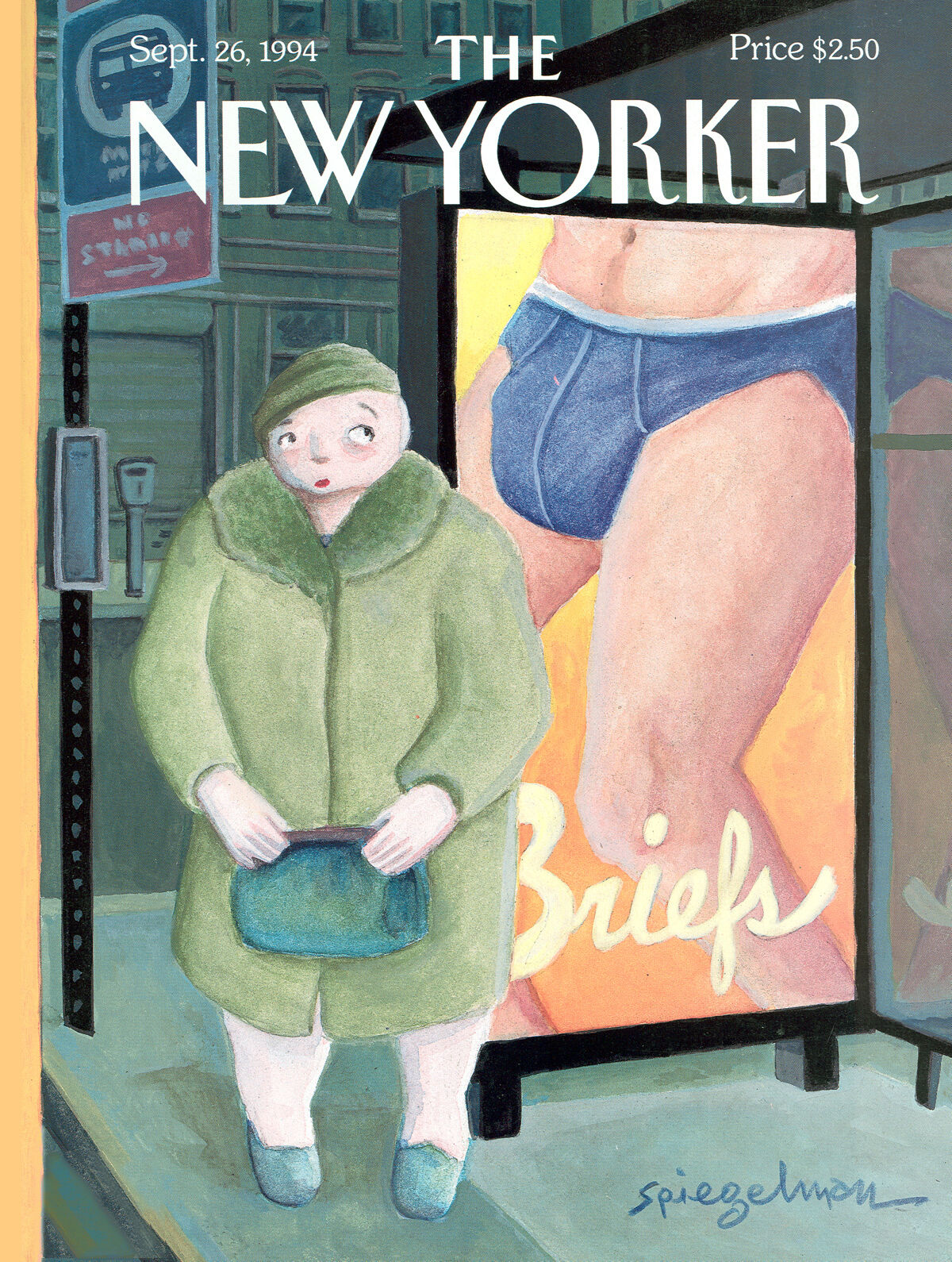 Advertisement
Where could the New Yorker improve? Mouly and Spiegelman both cited depictions of older women, who they said are often used as a foil for younger women in order to emphasize the latter’s beauty and youth. Several covers show elderly women in isolation, with no older men around them, “peering out at the youthful vitality around them,” said Spiegelman. Spiegelman, who is 30, said she has been thinking a lot lately about how older women are portrayed and viewed in our society today. While sorting through The New Yorker’s older covers, she recalled asking her mother, “Are there images of older women where they aren’t the butt of the joke, where they’re just seen as respected?”’ to which Mouly had replied, “Patience: I can’t do the cover before the world changes. No one will get it.” But for her part, Mouly has continually published images that support an evolving vision of culture and thus, helps us visualize expanding possibilities for women.
A cover from 1955 by Mary Petty presents an older Victorian woman positioned at the second-story window of her house, looking down at a party in the courtyard nextdoor, as if a prisoner in her own home with her best days behind her. Another illustration by Petty, which made the cover the following year, shows an elderly woman reading in her opulent, four-post canopied bed as her maid plugs in her electric blanket, as if suggesting that, without a companion, it’s her only hope at warmth and comfort on a cold night.
A 1994 cover by Art Spiegelman shows an older woman as she gazes out of the corner of her eye at an advertisement for male underwear that is decorating her bus stop. Here, the artist challenges our cultural perceptions of an older woman: She is given agency and sexual desire.

The covers related to weddings and gay marriage represent one of the most exciting evolutions given how concretely these issues have progressed. “Our covers about gay weddings evolved from the first one where it wasn’t conceivable, to the celebration of it,” said Mouly. A 1994 cover by Jacques de Loustal, showing two grooms in front of a wedding cake, was “shocking” at the time. Today, Mouly said, “it would just look like the wedding section of the New York Times.”
Likewise, the 2012 cover by Gayle Kabaker that honors two female brides would have seemed unfathomable at the time of say Edna Eicke’s 1954 cover of two very young girls pictured while gazing at a white wedding dress in a bridal shop window. The more recent cover features two brunette women, each wearing a gown and veil adhering to traditional Western wedding attire, even as the image fosters an understanding of marriage that far transcends those early conventions.

The New Yorker in the Trump Era 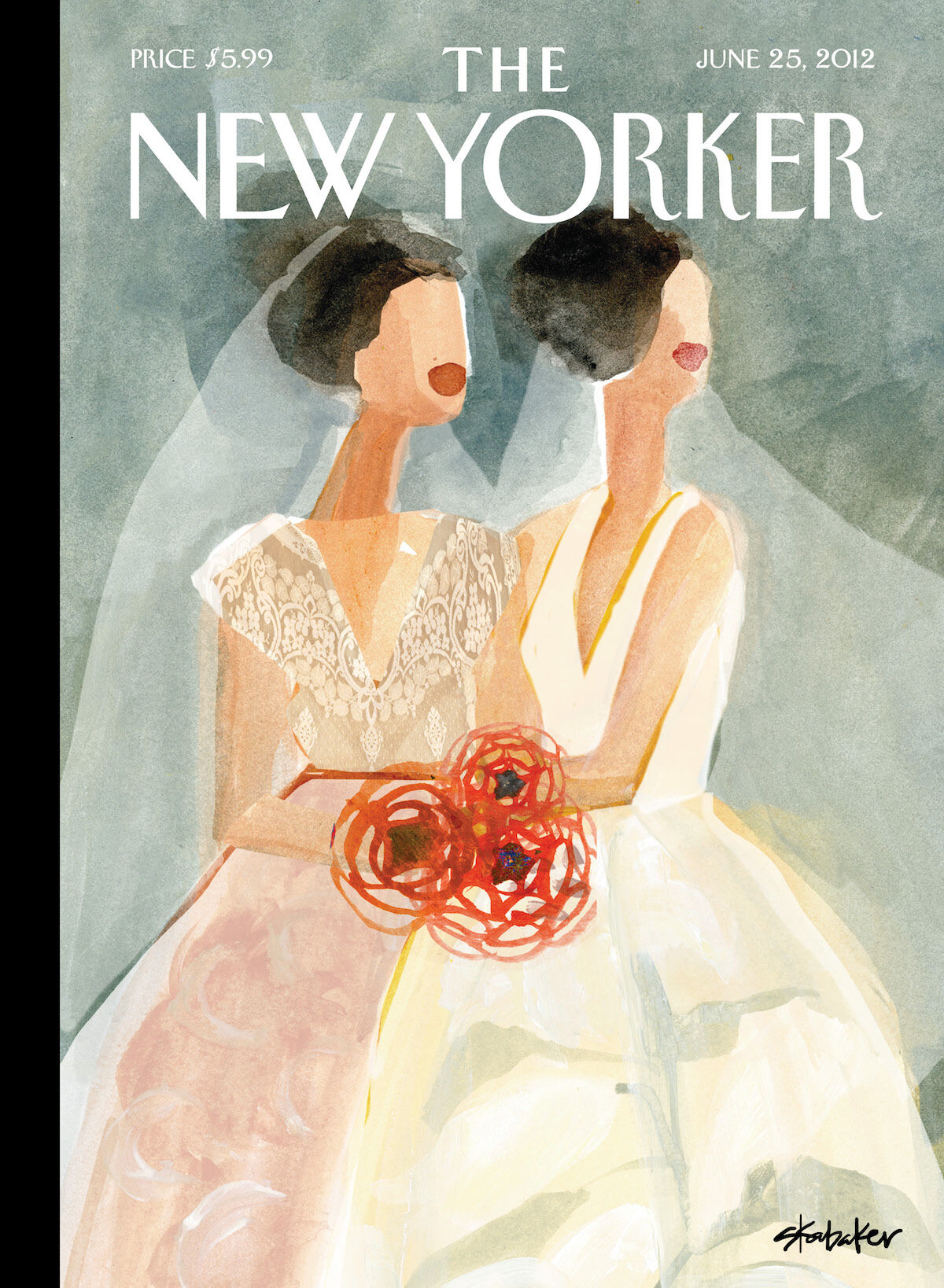 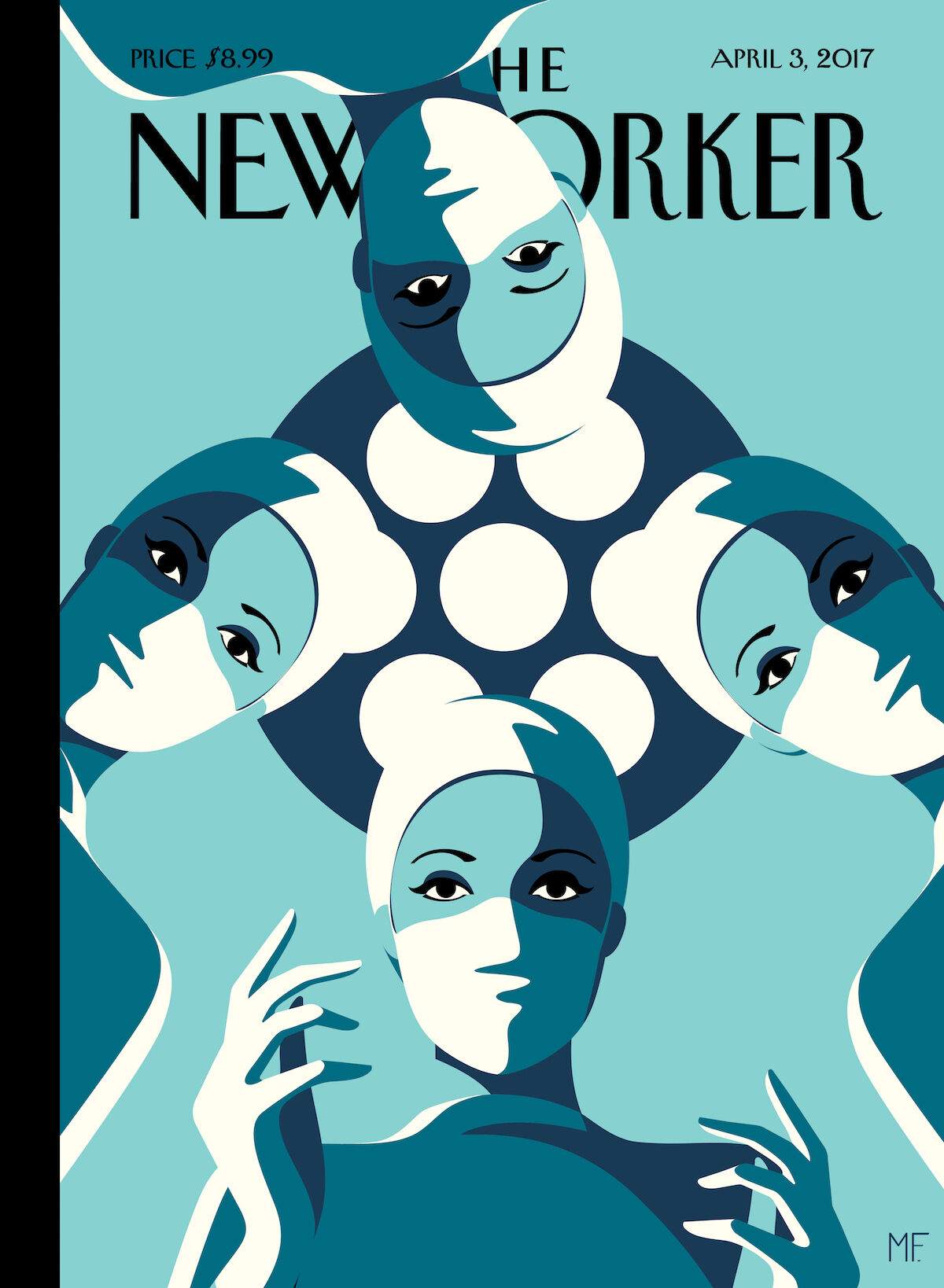 For an April 2017 cover, Mouly encouraged artist Malika Favre to alter her original sketch of men and women surgeons, looking down at their patient on an operating table, to feature solely women. The cover went viral as women across the world—Saudi Arabia, Mexico, Brazil, Turkey—became inspired to recreate the image using themselves and their peers and proudly post it across platforms with the hashtag #ILookLikeASurgeon.
Another cover, from October 2016, was sketched in the aftermath of then-candidate Donald Trump’s cruel comments about former Miss Universe Alicia Machado, who he called “Miss Housekeeping” and “Miss Piggy” in assumed reference to her Latina heritage and weight gain, respectively. Barry Blitt’s illustration shows a dour-looking, heavy-set Trump as pageant queen Miss Congeniality, sporting a one-piece bathing suit and a crystal tiara. The cover was deeply subversive, casting Trump, who owned the Miss USA beauty pageant from 1996 to 2015, and has bragged about intentionally walking in on contestants changing clothes, primped up like a beauty queen, an object for us to judge. The magazine’s fact-checkers flagged the drawing’s outdated pageant wear, which dates from the 1950s, but Blitt argued that was intentional: Trump, he said, is trying to drag us back into the 1950s.
And yet as these images suggest, the magazine, and our wider culture, has come an exceptionally long way from those earlier times. The path forward will require that cultural leaders like Mouly, and ourselves as individuals, continue to be champions of the world we want to see. “It’s not that a cover created change,” said Mouly. “It’s just that it can dislodge some of the assumptions and make you open up your realm of the possible—an image is a very powerful thing.”
Molly Gottschalk is Artsy’s Lead Visuals Editor.
Related Stories 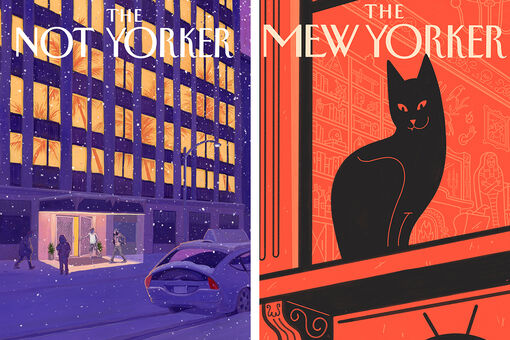 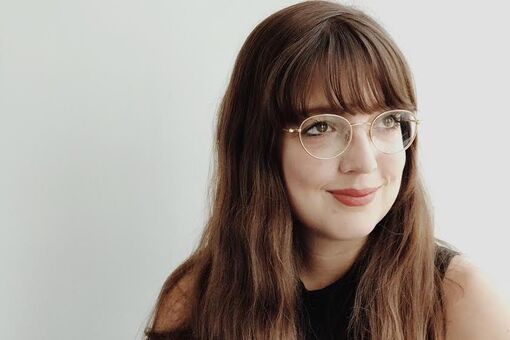