Abigail Cain
Jun 1, 2017 4:01pm
In art, is a dog just a dog? Certainly not in European art history, where a canine on canvas can contain multitudes—representing anything from fidelity to treachery to seduction. And while these contradictory readings may seem to muddy the message of a given painting, they are also evidence of the long and rich history of animal symbolism in Western art.
European artists have assigned meaning to animals both real and imagined since classical antiquity. In the 12th century, medieval scholars formalized certain readings by publishing the Bestiary—an illustrated guide that offered both natural history and moral associations for a wide range of creatures. During the
Renaissance
, artists including
Leonardo da Vinci
would formulate their own versions of the Bestiary; and in the 16th century, Venetian masters including
Titian
would further this tradition, creating their own works featuring symbolic animals. Inspired by this history, we share below seven animals—from peacocks to ermines—and what they symbolize when depicted in paint. 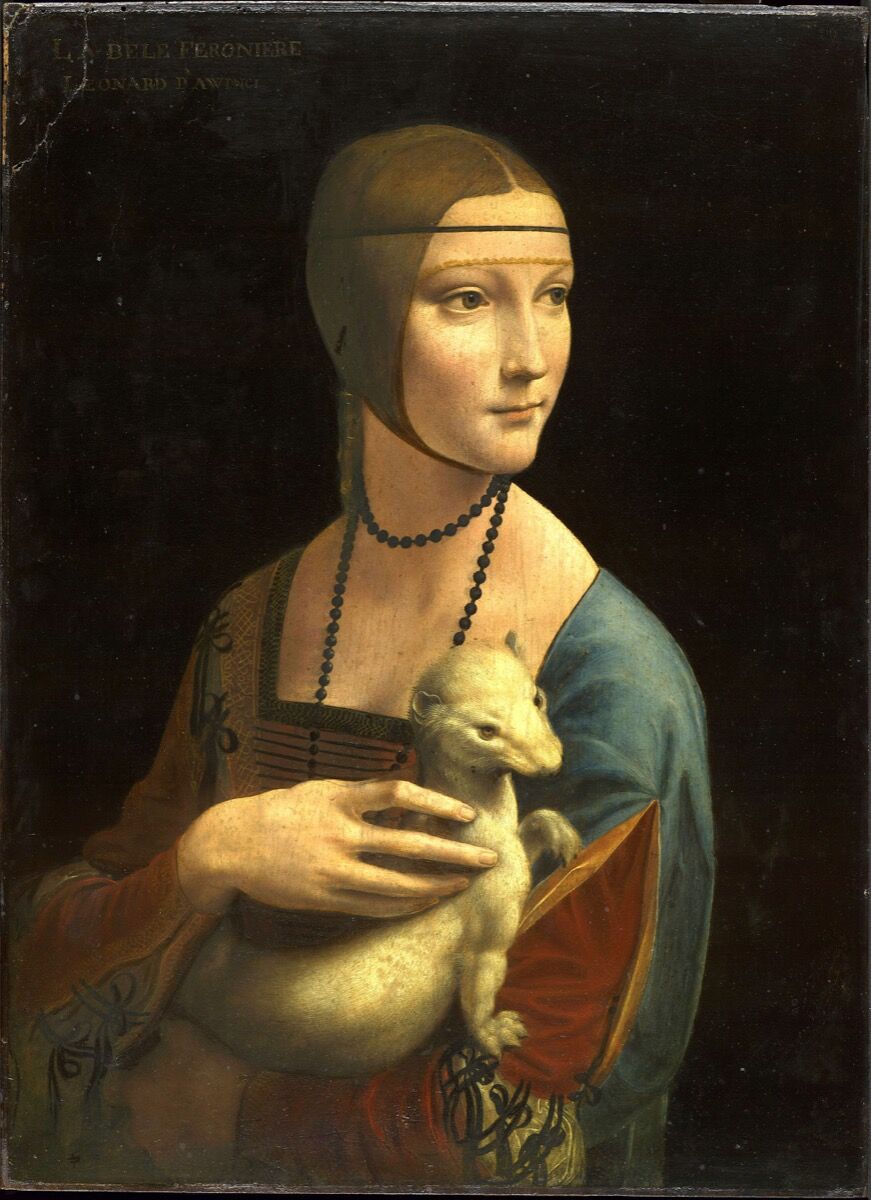 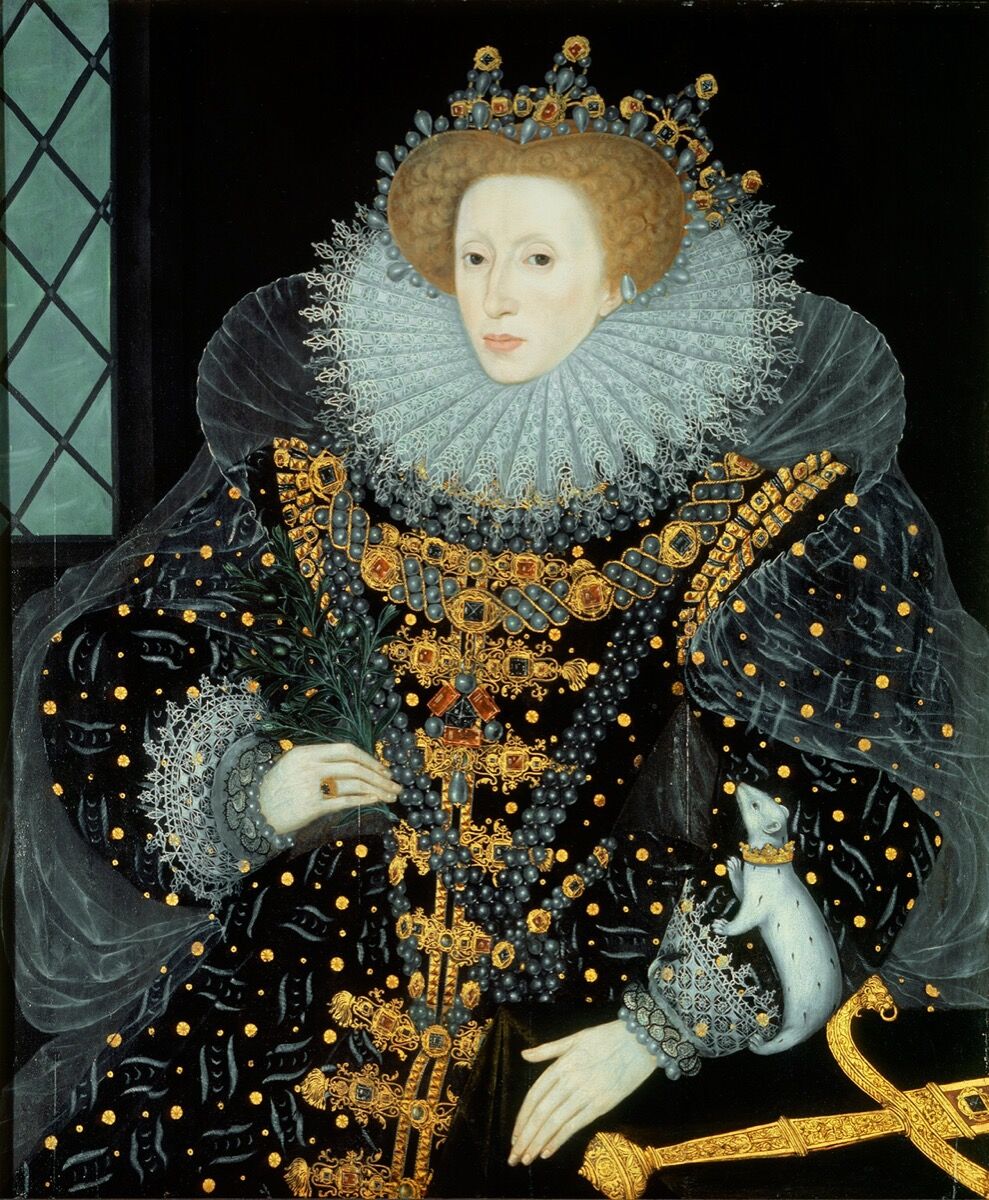 A stoat’s pelt transforms from brown to white in winter, during which time it is more commonly known as an ermine. Accepted wisdom in the West held that if the animal’s spotless coat was dirtied, it would immediately perish—making it a prime symbol of purity (and occasionally justice). Appropriately, the ermine features prominently in this painting of Elizabeth I of England, the “Virgin Queen.” More oblique is the animal’s inclusion in Leonardo’s 15th-century portrait of the less-than-chaste Cecilia Gallerani, mistress to the Duke of Milan. The painter may have been nodding to the duke’s recently awarded insignia for the Order of the Ermine, or making a sly reference to his lover’s last name (Gallerani bears a resemblance to galay, the Greek word for ermine). 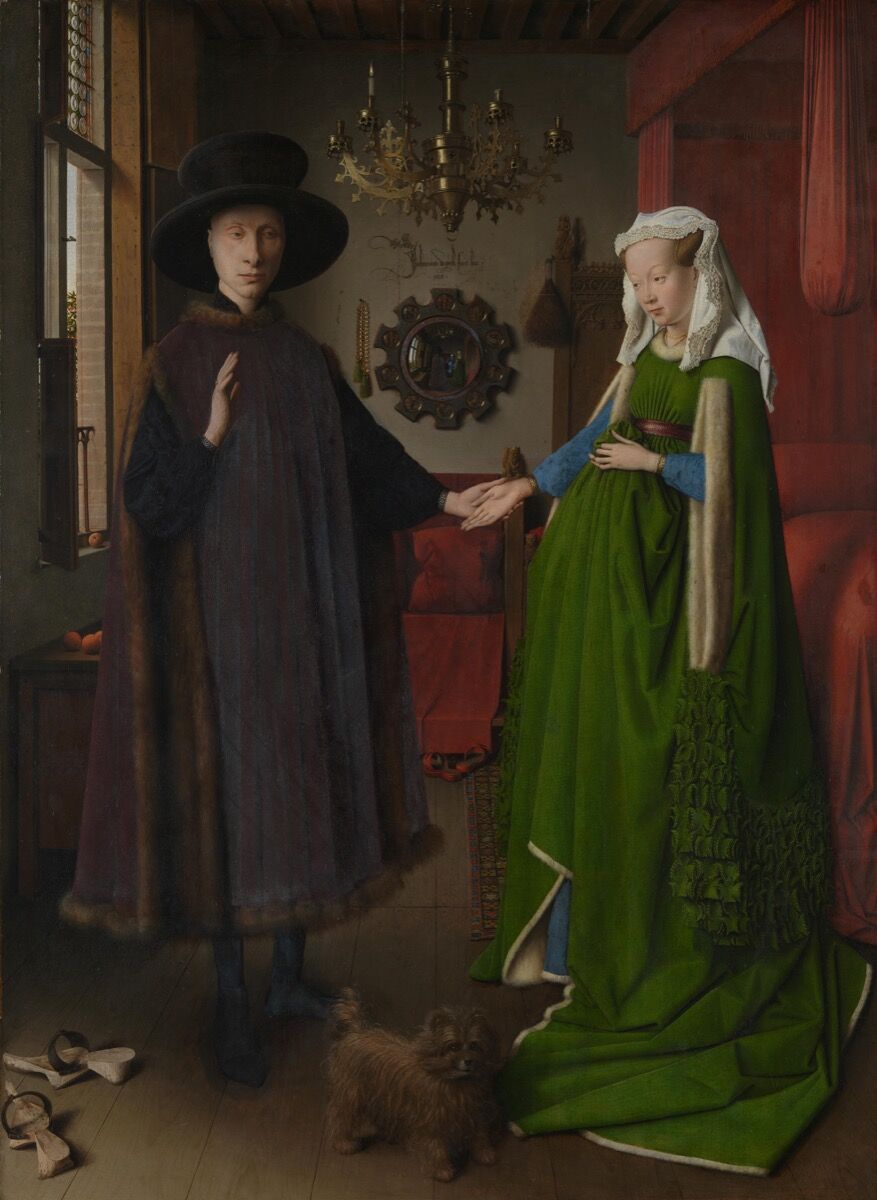 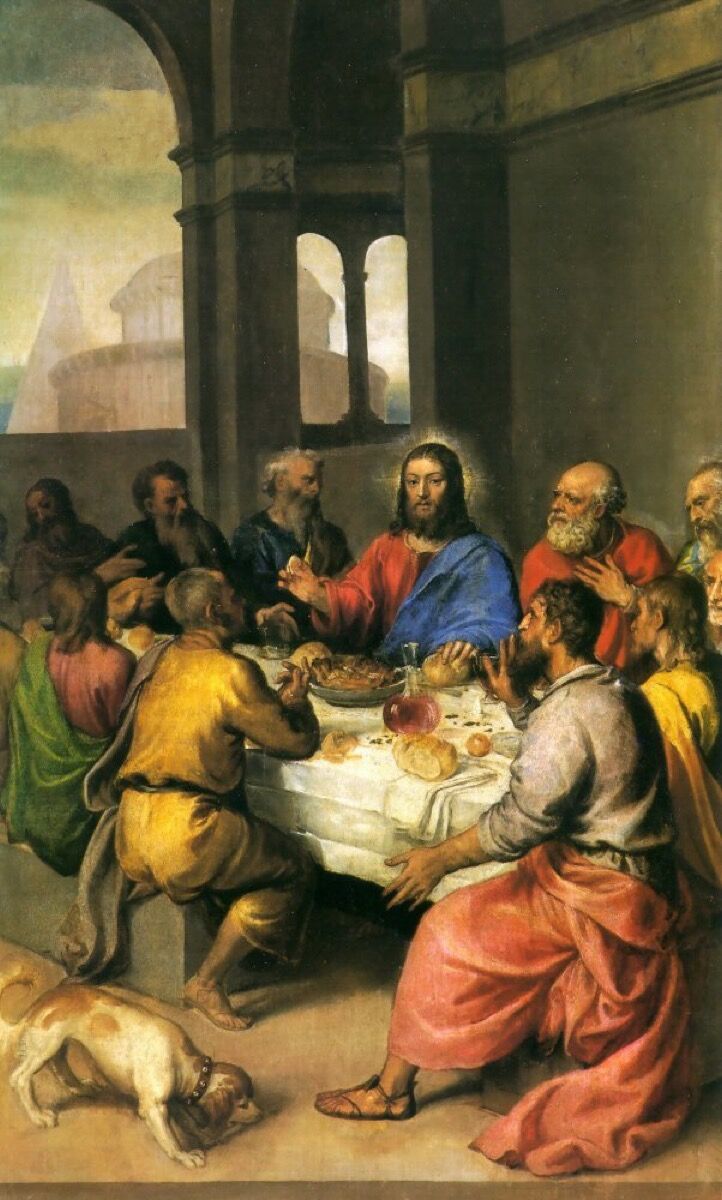 Advertisement
Dogs, at least in art, have not always been man’s best friend. From classical antiquity through to the Renaissance, their associated qualities were a mixed bag—from vigilance, faithfulness, and wisdom to anger, lechery, and avarice. Titian drew on a medieval interpretation of the dog as treacherous for this scene of the Last Supper, pairing Judas with a canine to symbolize the disciple’s betrayal of Jesus. In Renaissance portraiture, however, these meanings were softened. Dogs instead came to symbolize fidelity, as in
Jan van Eyck
’s portrait of a married couple, as well as female seduction. 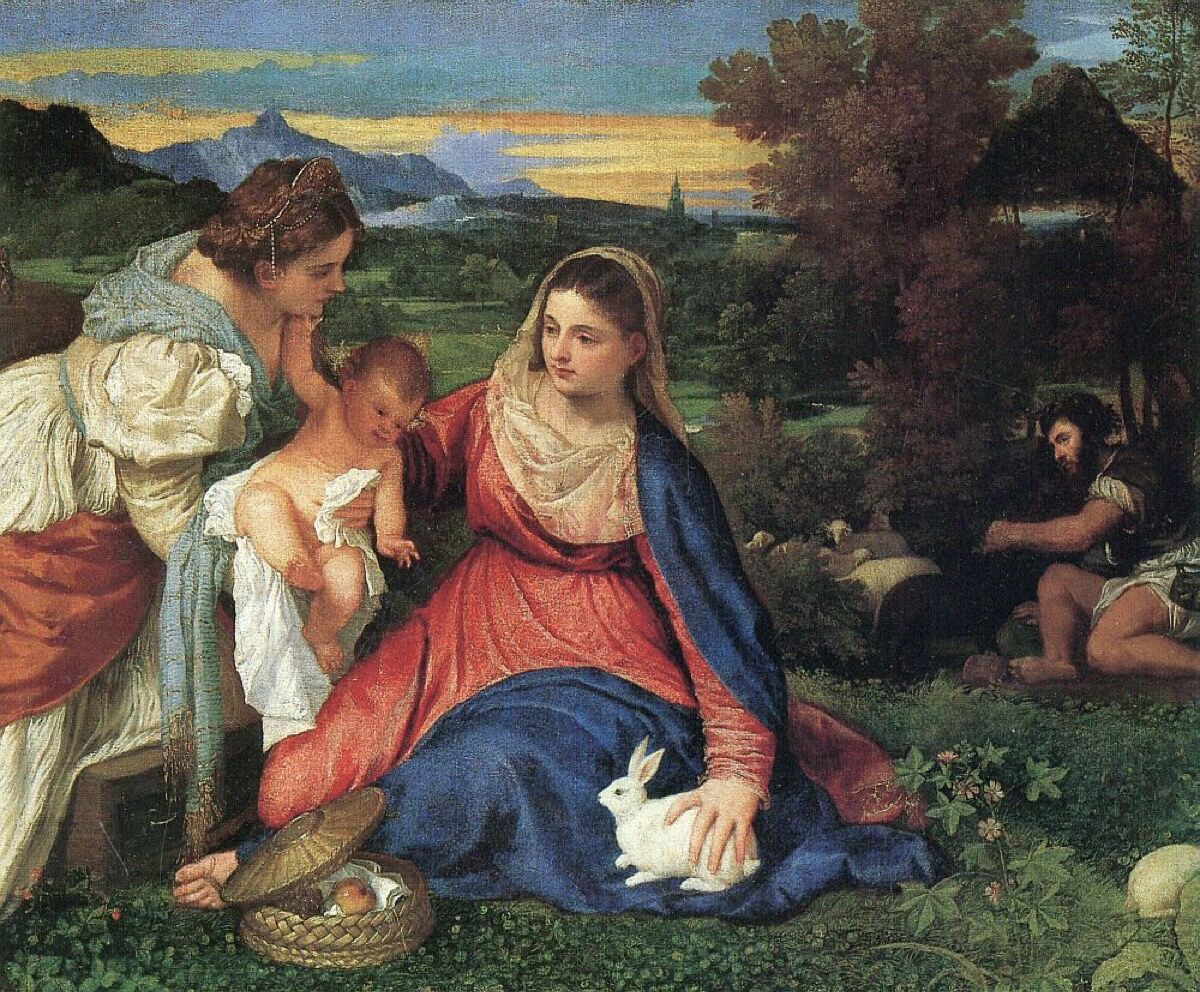 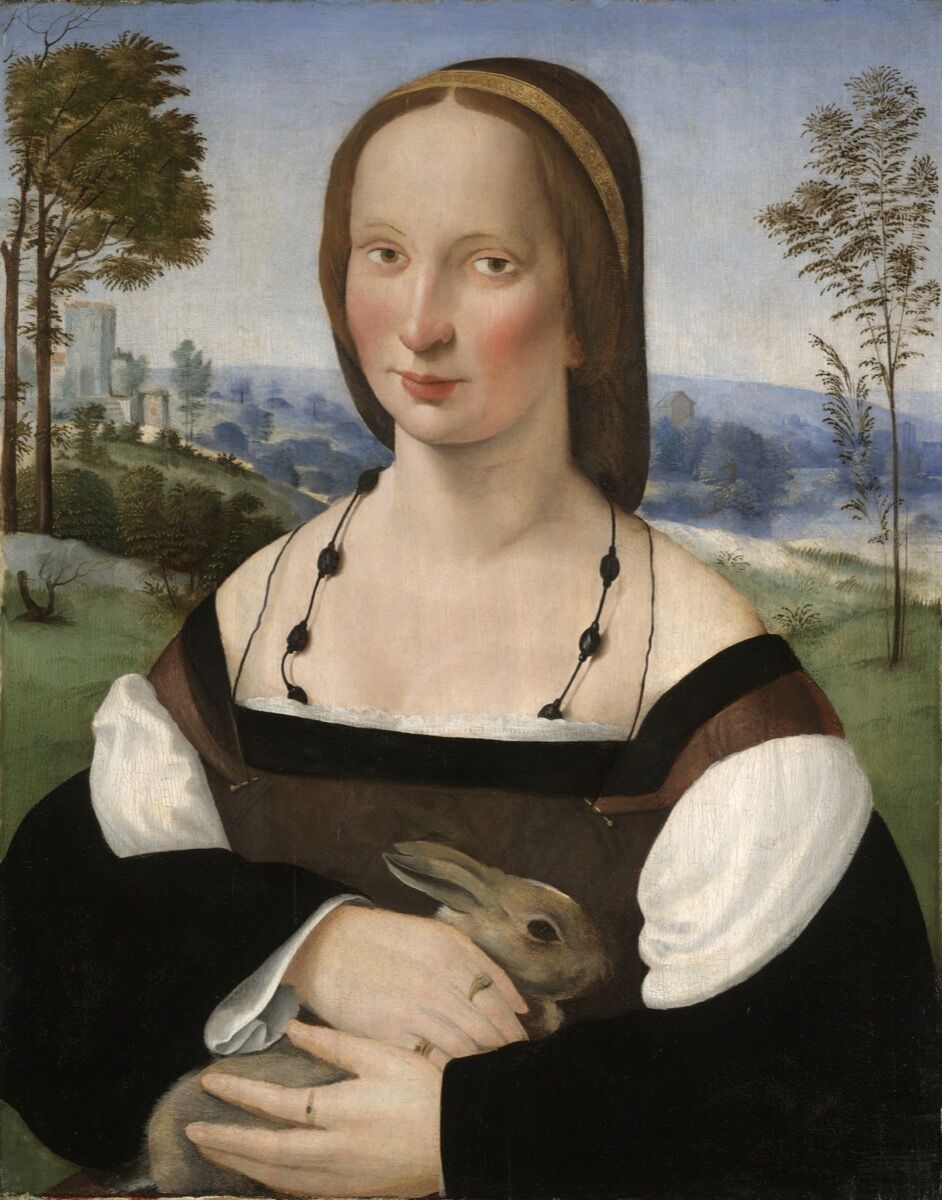 Ridolfo Ghirlandaio, Portrait of a Lady with a Rabbit, ca. 1508. Image via the Yale University Art Gallery. 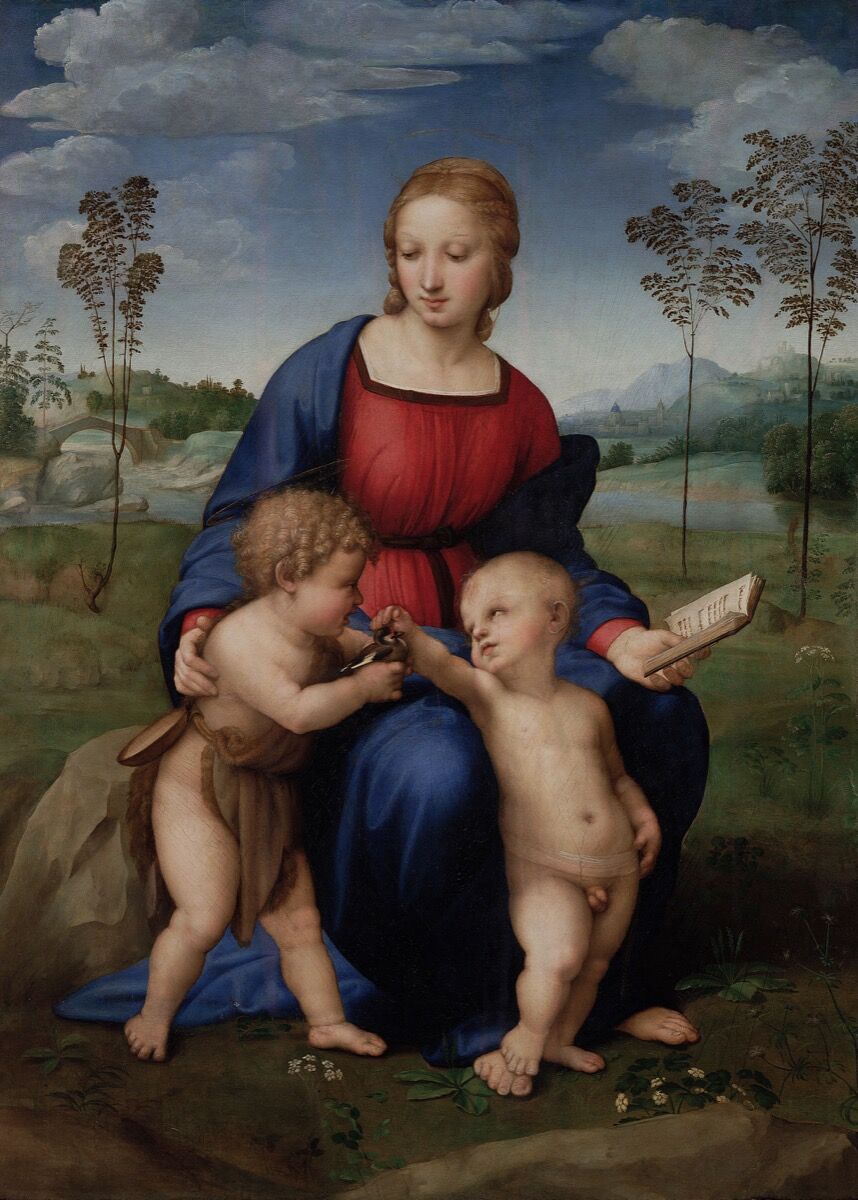 Raphael, Madonna of the Goldfinch, 1505-06. Image via Wikimedia Commons. 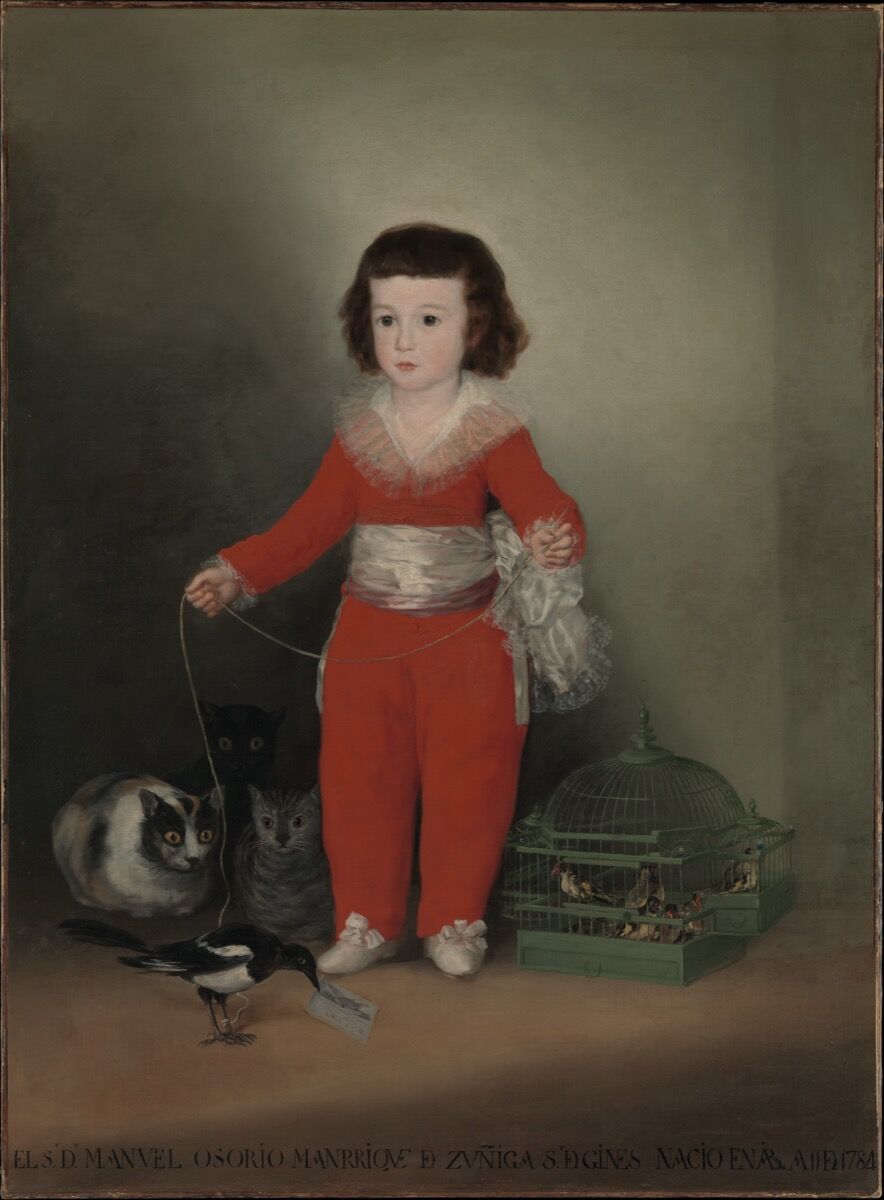 According to legend, a small bird—a goldfinch or a robin, depending on the telling—swooped down over Christ as he shouldered the cross and plucked a thorn from his crown. A drop of blood fell on its feathers, evidenced by the red plumage both birds sport today. This story, as well as the finch’s tendency to eat thistles and thorns, linked the bird to the Passion of the Christ in Renaissance art.
Raphael
’s Madonna of the Goldfinch (1505–06), for example, depicts John the Baptist as he shows a finch to Jesus as a sign of his future crucifixion. More generally, birds were thought to represent the soul in Christian art.
Francisco de Goya
’s portrait of the young Manuel Osorio Manrique de Zuñiga pairs this interpretation with the Baroque association between caged birds and innocence. 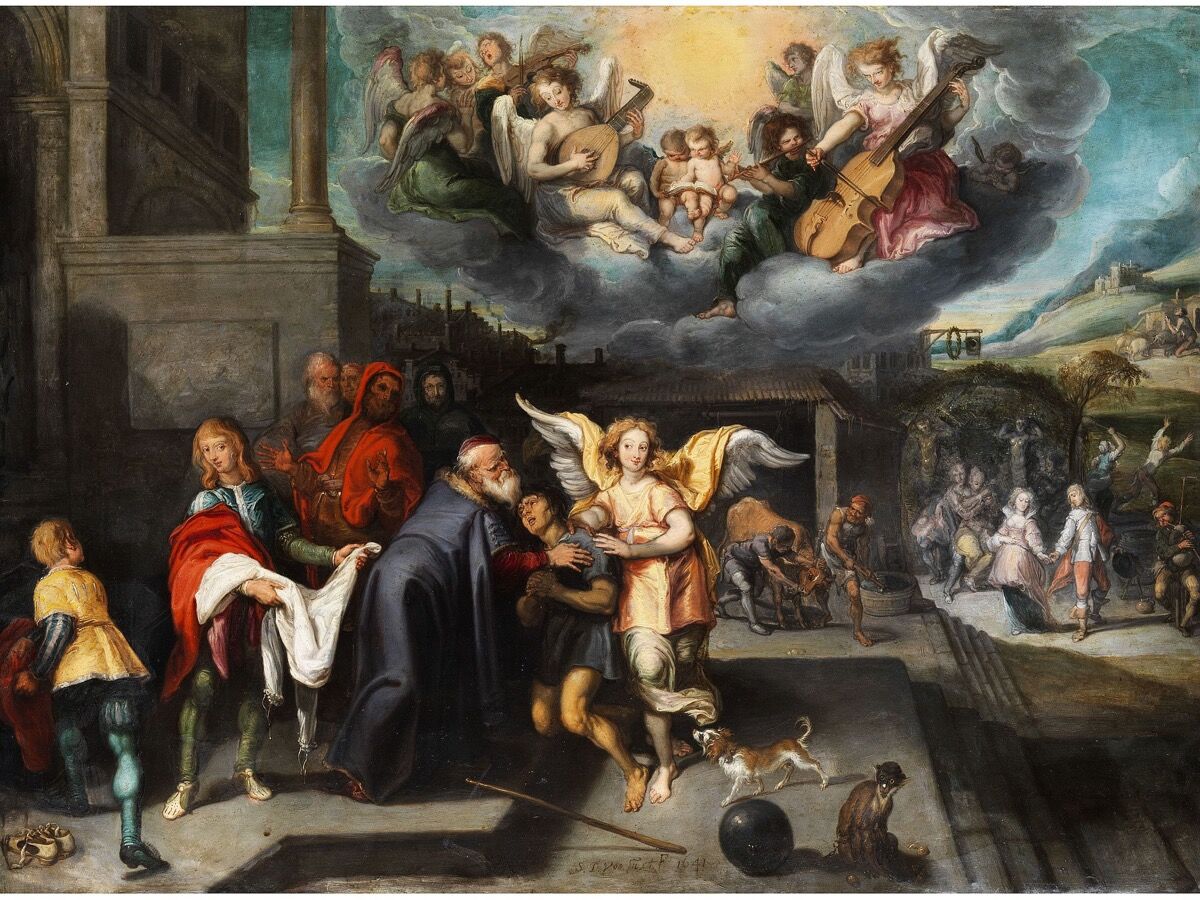 Although Christians in the early Middle Ages viewed monkeys as symbols of the devil, that deeply negative connotation was eventually revised. In medieval and Renaissance art, these animals were sometimes seen as stand-ins for humans. An ape holding an apple signified the fall of man, while a fettered monkey represented humans encumbered by earthly, base desires. Monkeys were also tied to representations of painting and sculpting—skills seen as imitative and thus represented by an animal often viewed as a copycat. 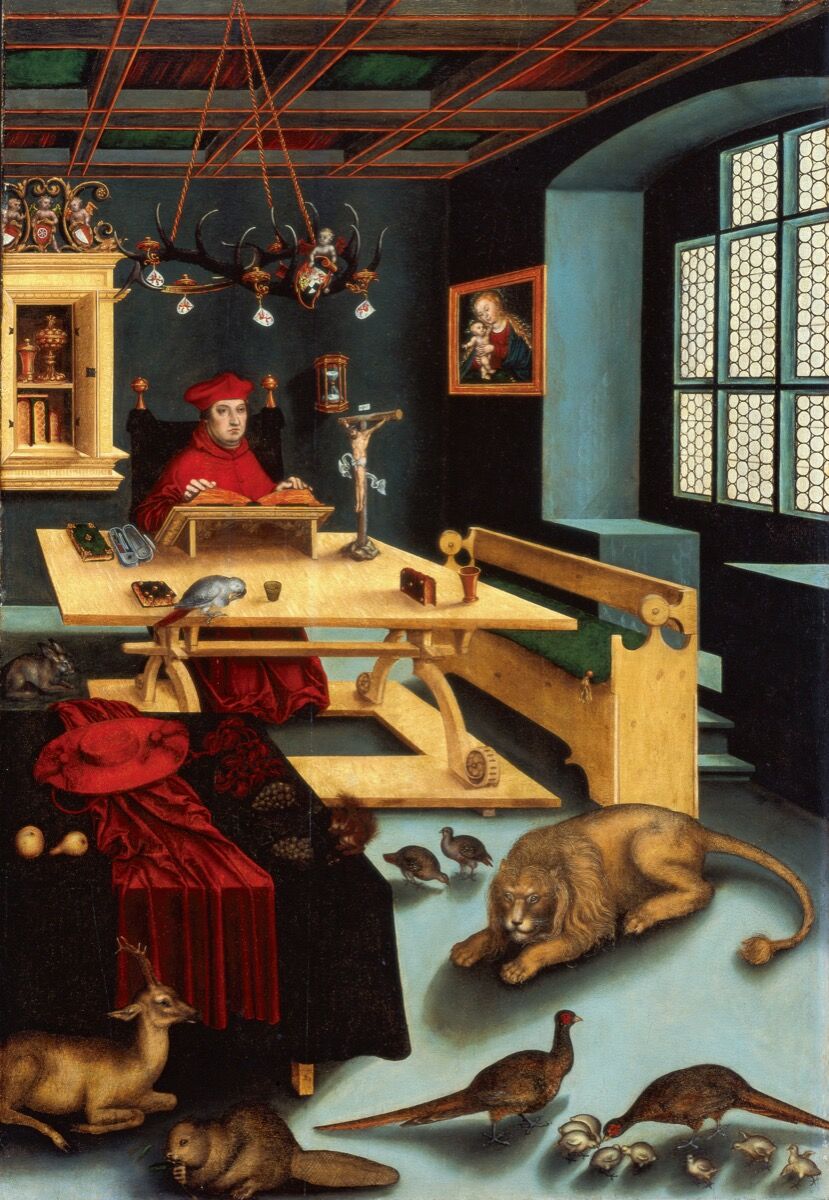 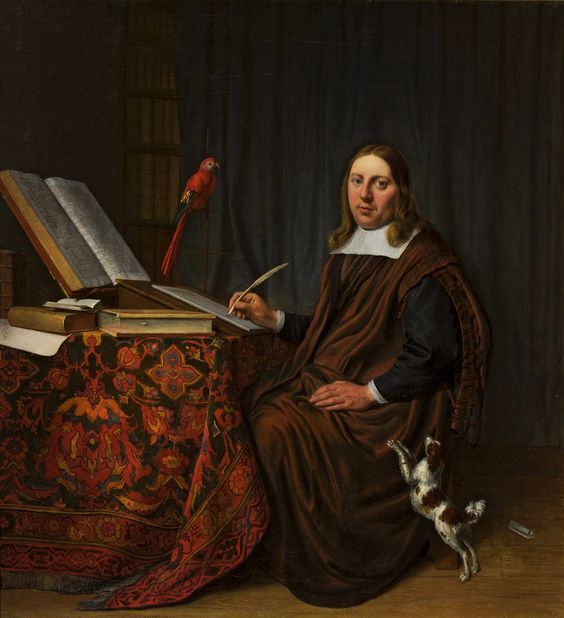 Hendrik Martenszoon Sorgh, Portrait of a man writing at a table (Scholar in his study), 1663. Image via Wikimedia Commons.

With its uncanny ability to imitate the human voice, the parrot was associated with eloquence. This was the meaning that Hendrik Martenszoon Sorgh intended to convey in this 17th-century portrait of a man, likely a Protestant preacher and theologian. But it also had religious connotations, specifically the Immaculate Conception and the Virgin Mary. The distinctive way in which the parrot raises its foot while eating, as demonstrated in this work by
Lucas Cranach the Elder
, was considered a reference to conception through the Word of God rather than physical means. This particular bird also faces a painting of the Madonna and Child, further reinforcing its connection to sacred motherhood. 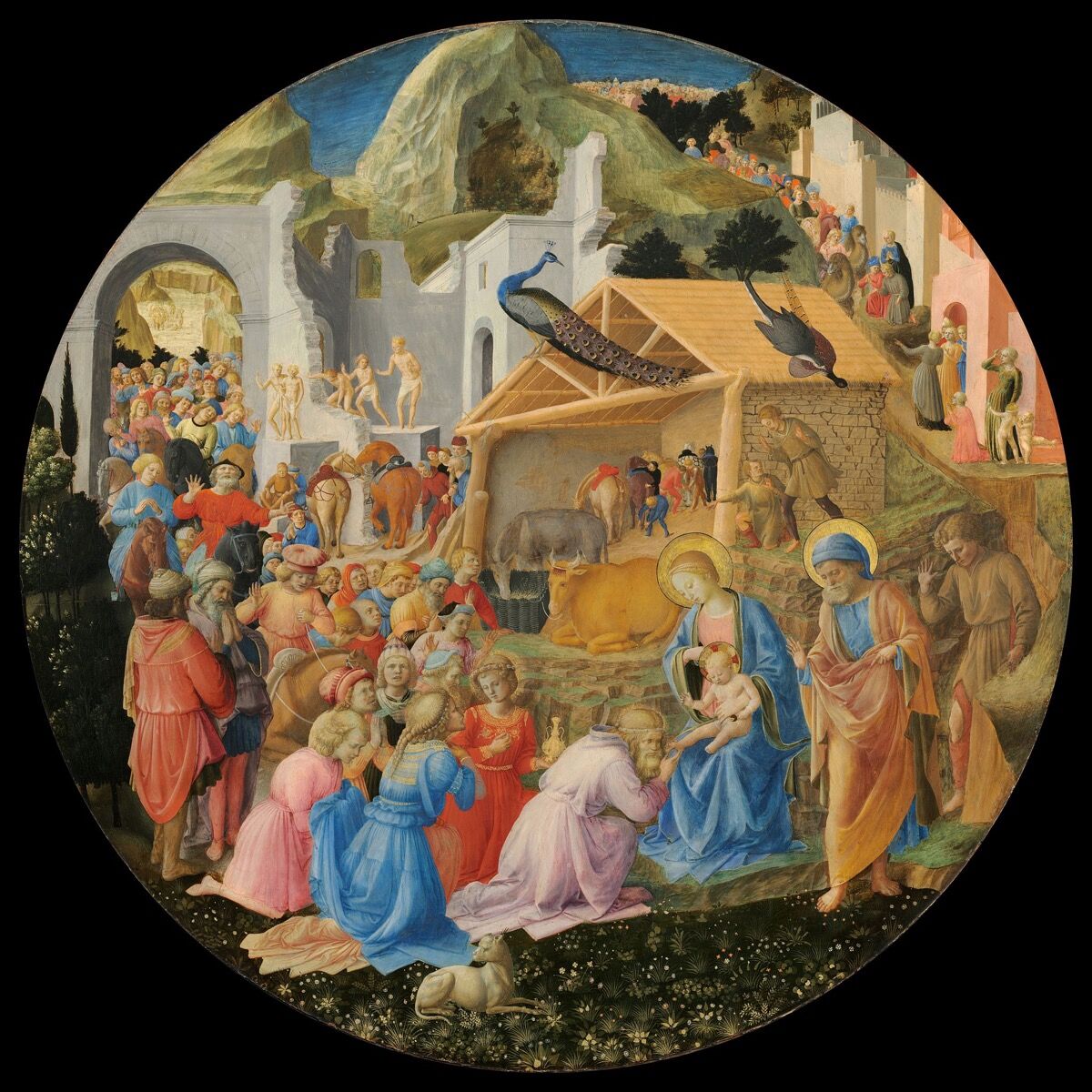 Fra Angelico and Fra Filippo Lippi, The Adoration of the Magi, c. 1440-60. Image via Wikimedia Commons.

This brilliantly hued bird became the symbol of immortality in
Christian art
, stemming from the ancient belief that its flesh never decayed. It can be found perched in the majority of Renaissance nativity scenes as a reminder of the resurrection of Christ, and therefore eternal life. The peacock’s tendency to strut while displaying its flamboyant tail also led to associations with pride and vanity—although these are significantly less prevalent in European art of this time.
Abigail Cain
Related Stories